In the past, HOI was often mentioned when we discussed platform games on the Amiga, for some reason the game got a silly amount of fans, and to this very day, this is something i really can’t comprehend why.

HOI is, without a doubt, a high profile title that many have played either in the form of the freeware HOI AGA Remix version or some demo disk or whatever, but did they play it because it was a good title?

I always felt that HOI had a certain Public Domain feel to it and that it was simply too difficult to master and a very stressful game, the music is very “demoscene ish” and that ain’t a bad thing in general but for this game, it just adds even more stress to the gameplay, it certainly doesn’t help that there ain’t any sound fx in the game either (at least if the music option is ON).

I mentioned the demoscene here for a reason as yes TEAM HOI was actually a rather active team in the scene and they even put out the very first AGA demo ever.

If there is one thing that I have learned through the years of being both a scener and a gamer/dev is that Demo effects work rather bad inside games if being overused. The screenshots above show some typical demo effects in use and while them being both visually and technically awesome you will still get sick of seeing them all the time in the game (left one is when you die for example).

The best thing with HOI is that when it all works then it does it with style, lovely style and silky smooth scrolling bundled with tons of technical achievements that make it brilliant to look at, sadly it doesn’t take long before you end up being mad at it again and just want to switch it off.

HOI is probably one of the longest games of its kind on the Amiga, an insane amount of levels and variations makes it rather special, you get a rather good Jetpack game in here too and yes there’s that Shoot Em Up part where they have mixed various game styles from Space Invaders to the more traditional shooters of the same era.

The Intro movie is short and not all that much to write about but it still has to be mentioned as there is something to it, I remember reading about it in magazines and I was led to believe that it was long and amazing, it lasts for about 5 seconds and consists of a few nicely animated frames of the animal you control in the game.

Some pictures from the last level in the game, the last level in the game have to be one of the tensest and craziest seen for its time, flashing backgrounds, zooming copper lists effects and moving foregrounds as well as moving objects and what not makes this a proper challenge for even the most hardcore gamer out there.  This part of the game is most likely the reason for the Epileptic seizure warning found on the box, the manual and in-game… more about that soon.

The box is rather good, slick style and most definitely one that i would have bought if I had ever come across it back in the day.  The box pictured here is indeed mine but I bought it from a friend in Denmark and yes it is complete and in perfect condition, or it was that at least when i got it a few years ago.

The backside of the box is also rather good, here you can also see the epileptic warning thing mentioned earlier.

The floppy stickers are clean and good but at first, it felt like they were homemade or something.

The manual consists of a few b/w pages, nothing particularly exciting except for the credits list and that Level 5 warning thing, yup it’s that epileptic warning again…

This has to be the only game on the Amiga with such a warning or?

Here is a proper collectable, an HOI plastic pin. Great looking but awfully simplistic and umm, well i guess i know why it is still in the box after almost 30 years.

Awesome collectable this one but not one that I class as an OMG one. 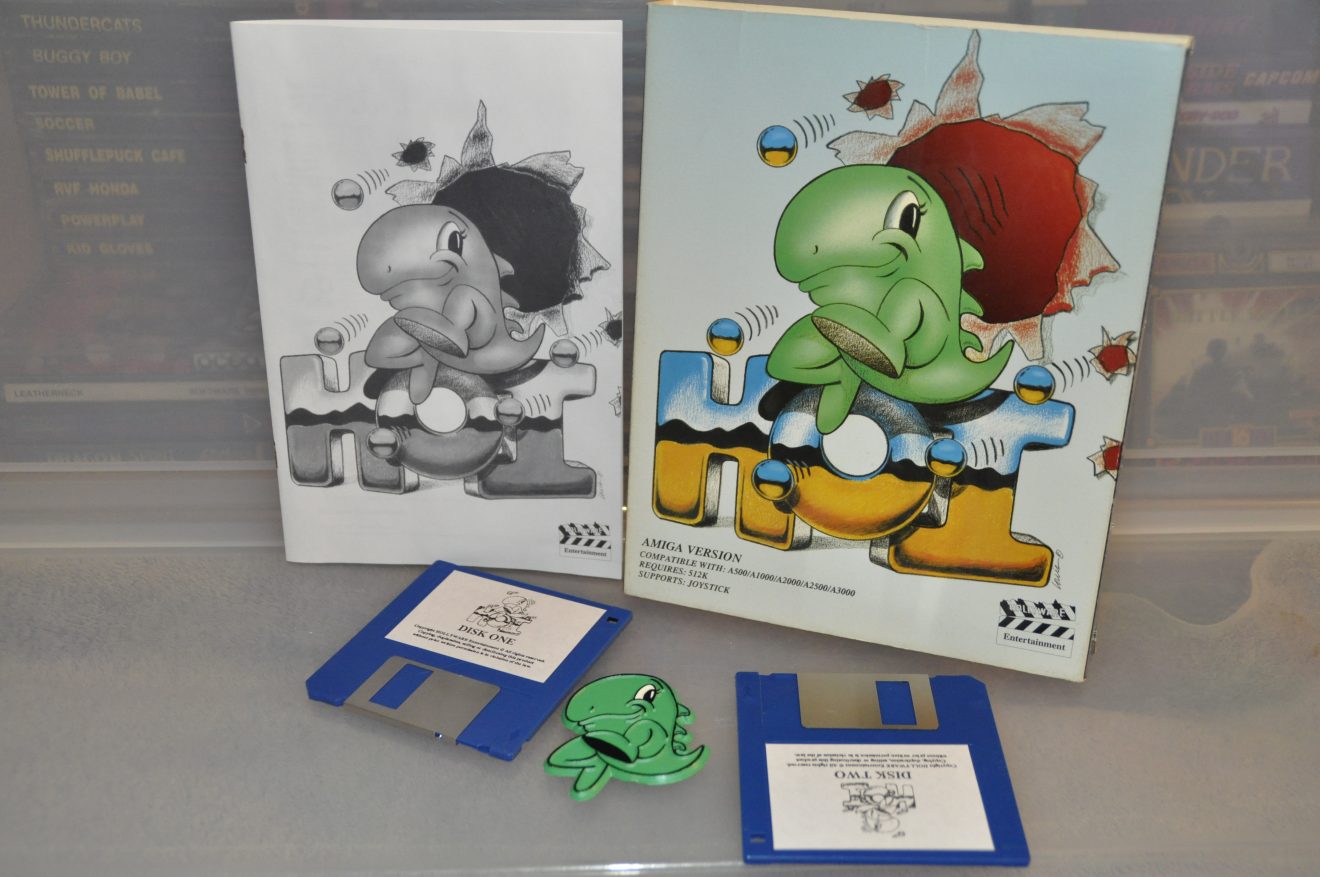 Hoi for me stands as unicum and a game that worked better back in the day, the game is full of style and technical marvels but in the end, it really ain’t more than a game that tried everything it could to implement the best of two worlds without getting the recognition it deserved. There are people out there who have completed this game in one single life and i would never have believed that if there wasn’t video footage of it, major respect to those, I have to admit that I struggled to beat it with 20+ lives and a big box of swearing. 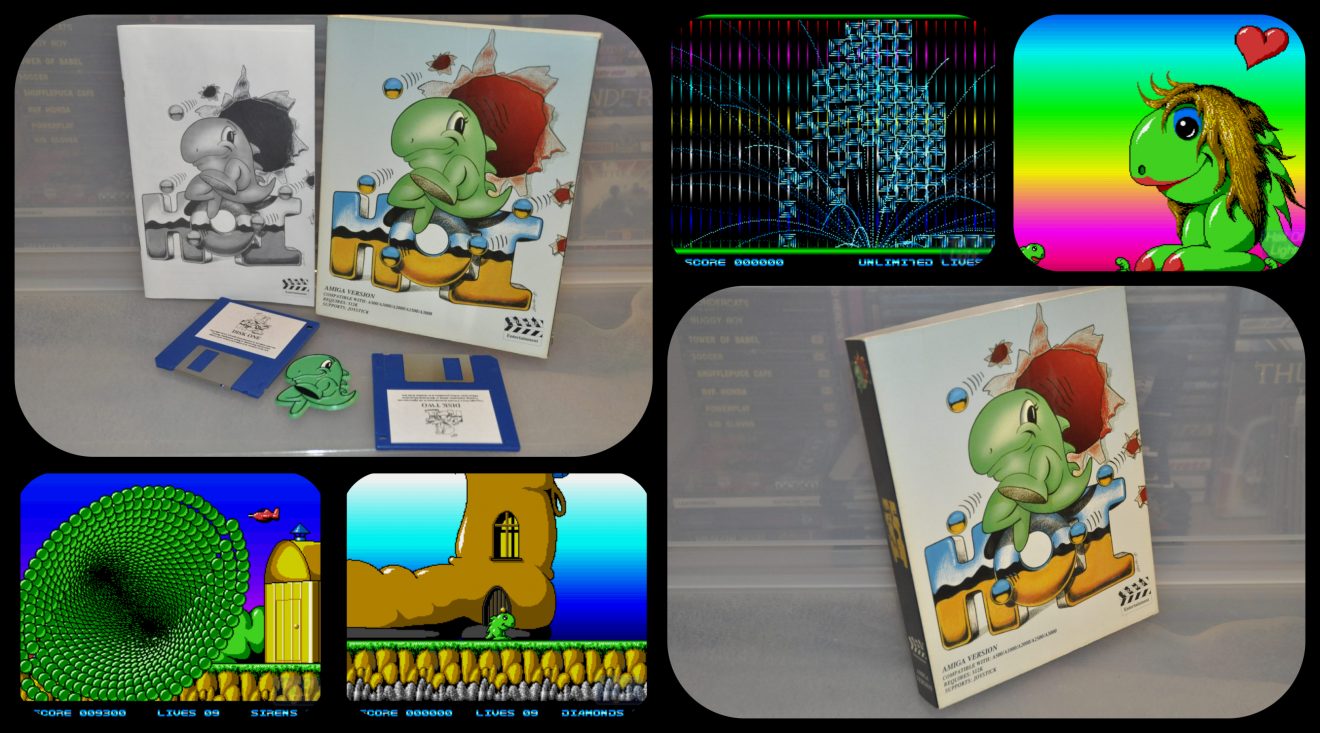