Scintillatron 4096 is one of those games that just pop up under the radar and yet manages to grab me “by the balls”, yes it is another one of those titles that i simply can’t get enough of, oh and if that wasn’t enough, it is made by Amiga people and there are a lot of (Amiga) references / easter eggs all over the place!

Now that i got your attention, Scintillatron 4096 is an another one of those overhead TwinStick Shooters that we so very much love here at the Blog, it is all about scoring the highest combo, getting the best power-up’s and yes maybe most of all getting on top of the high score list(s). 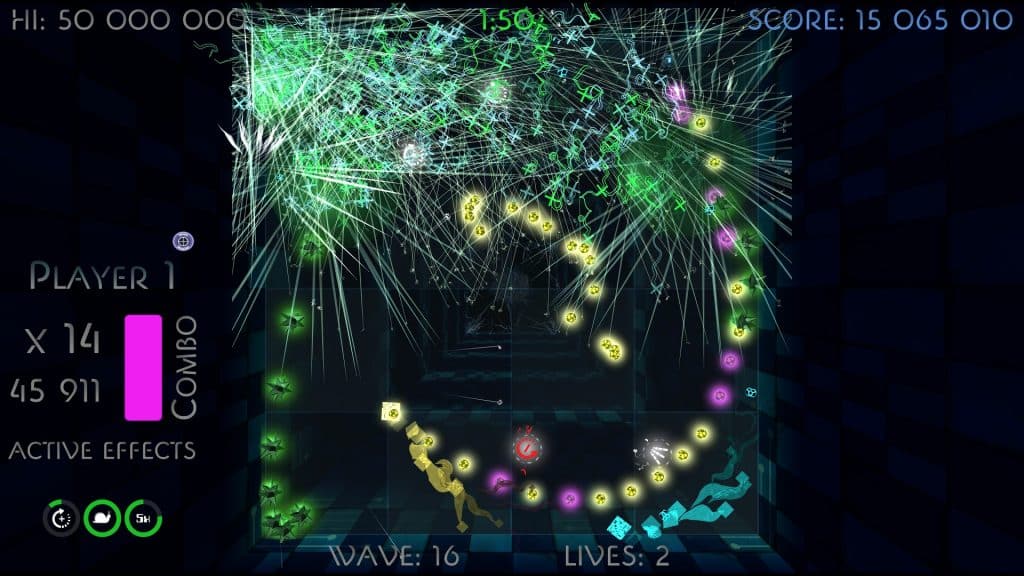 The game is available exclusively right now for both the PlayStation 4 and the Vita as a Cross-buy title, both versions are basically the same although there are a few extra modes on the PS4 like for example the Couch multiplayer games.

The gameplay is rather traditional and there ain’t much new to be found here but that was never their goal either I guess, I’ll try to explain it in the shortest way possible with saying that you have to shoot everything that moves but if you shoot everything that got the same colour first and then the second colour after that, well then you have understood the mechanics and how to get a brilliant combo and score.

The game is also littered with power-ups and various upgrades that will make your score better and some of the challenge is indeed to manage and grab these power-ups before they vanish.

Yes, that did indeed simplified it quite a bit and yes I didn’t mention the hordes of bullets and enemies and whatnot that will appear on screen after a few levels, oh and yes i also didn’t mention the worst enemy of them all – the timer – which eventually leaves you with a hurry-up mode. 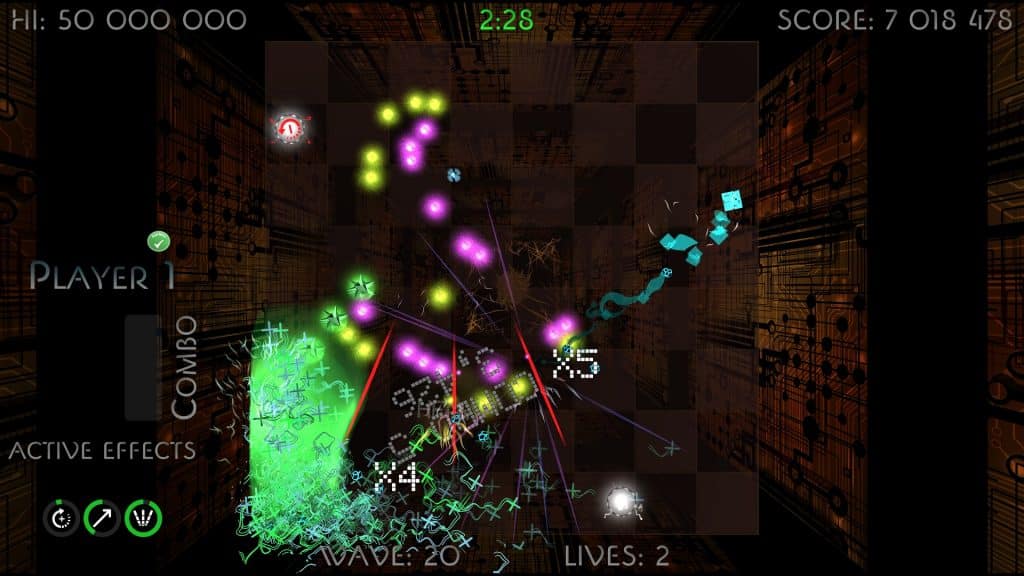 The game is littered with awesome easter eggs and normally i would have loads of pictures for you (yes there are some above), first one is in the name i guess “4096” and by that, i think they are either on about the term 4k intro due to their background in the Amiga demoscene or maybe its a small hello to the Amiga’s Hold And Modify mode (HAM).

Another nice one is a certain trophy description and name, Fat Agnus.

There are also levels that carry the Amiga heritage, Guru Meditation anyone?

We could go on and on here i guess, I guess the developer will have to drop in here and comment with more, i dare you Chris Pritchard & Roch Gadsdon :p

Oh and one more thing, they used to be in an Amiga demo group called Vivid Software and there probably are loads of things about them on the net to dig into for those of you who are into all the Amiga connections.

I found a few screenshots at Exotica from one of their demos, if you want to check the demo out yourself then download the file from here.

I can’t find a Youtube recording which is indeed a bit odd, maybe someone should make one right away? 🙂  (Mad Matt, are you there?).

I must add that they have mentioned their Amiga Scene days on their About Us page at the kFunction website, well worth a read for those of you who dig history and Amiga Connections. 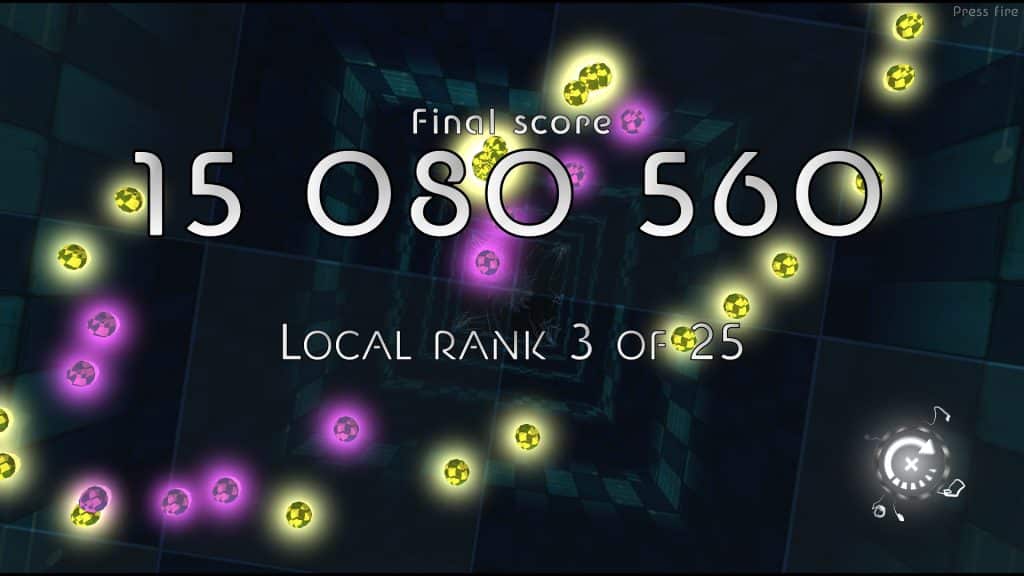 The thing with Scintillatron 4096 is that it is yet another of those games that you will either love or hate due to the fact that when you rule in it is when it is bloody brilliant, when you play it bad then there’s no way to fix it other than try and complete the wave and accept that you did bad and try again.

I never expected to do good on the Vita version due to the screen size etc but I just needed to play it more and sort of getting used to it and learn how to stay focused, it is easier to stay focused on a big tv screen for sure, another thing is that the music and SFX really lifts the game up and makes it more immersive and we all know how low the sound on the Vita can be sometimes right? 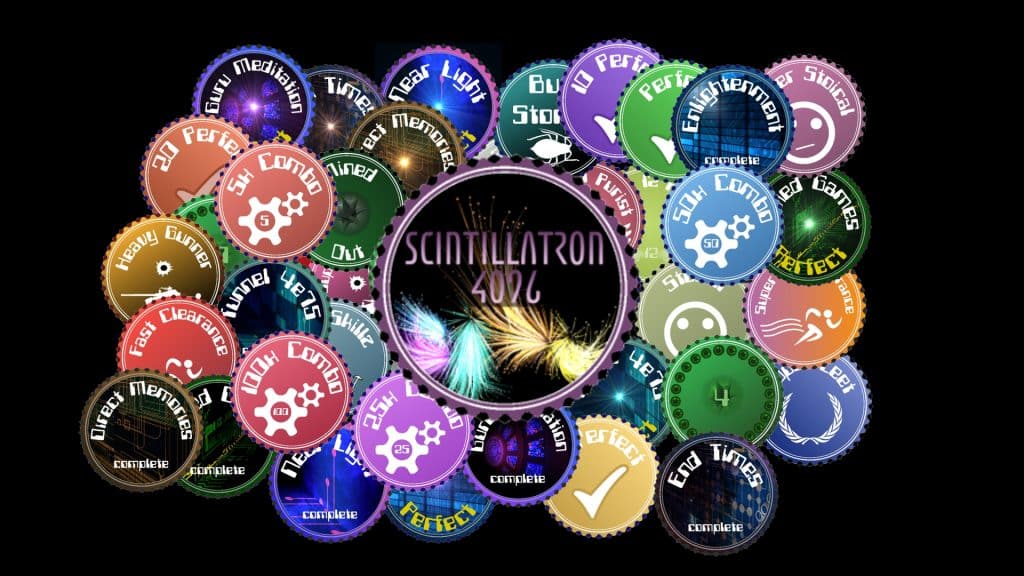 While most of the replay value sits in the high score lists there is even some fun to be had in chasing the trophies, kFunction have put a lot of time into them to make them fun to chase by the look of things, the best thing is that it is cross-buy and you get to chase 2 full sets of trophies too.

The only negative thing for most would be the price tag i guess, this is a typical £4.99 type of game but instead, it is nearly double that and unless you love these type of games then that might be a bit too much to put on a title like this.

To fans of the genre and maybe more so to the Amiga fans out there this is a must-have title and once you get hooked is when you will have trouble stopping, it offers endless replay value really and as long as the online high score lists are working and trophies *plings in* I simply can not see a reason why anyone sane would stop playing it. The mix of music, code, game mechanics and graphics scream PLAY ME and in the end, this is exactly what you will be doing too. – Instabuy for twin-stick shooter fans, others should wait for a sale and then get it.