2018 was a pretty good year for the Amiga and maybe more so for the Amiga CD32, loads of new games announced and all sorts of big box projects popping out of nowhere. 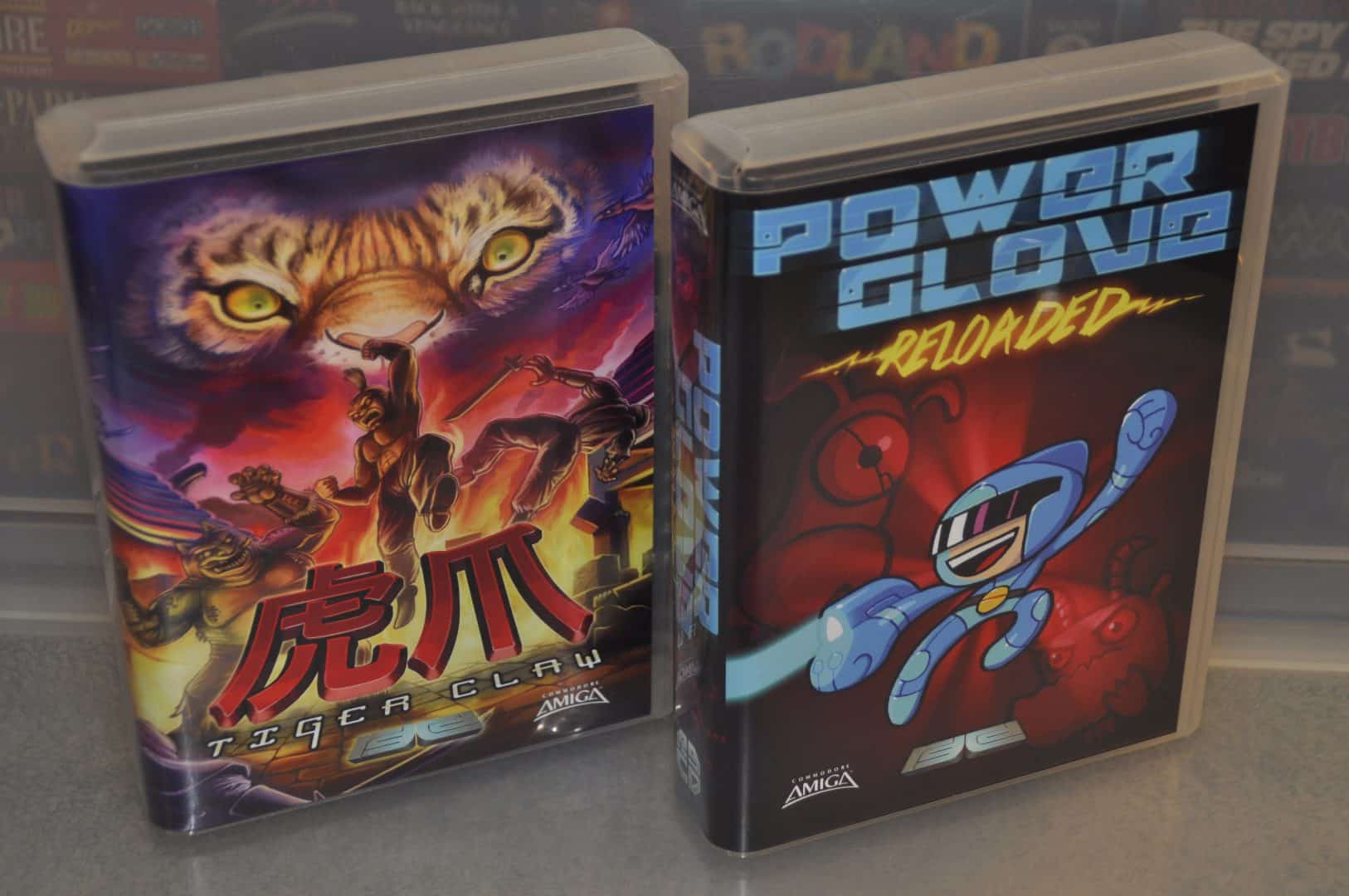 Just two weeks into the new year and yup, the physical edition arrived in my postbox (actually, both arrived at the same time… as seen above).

Identical boxes with a unified design and right now I am quite unsure about which one I like the most (in terms of flashiness). 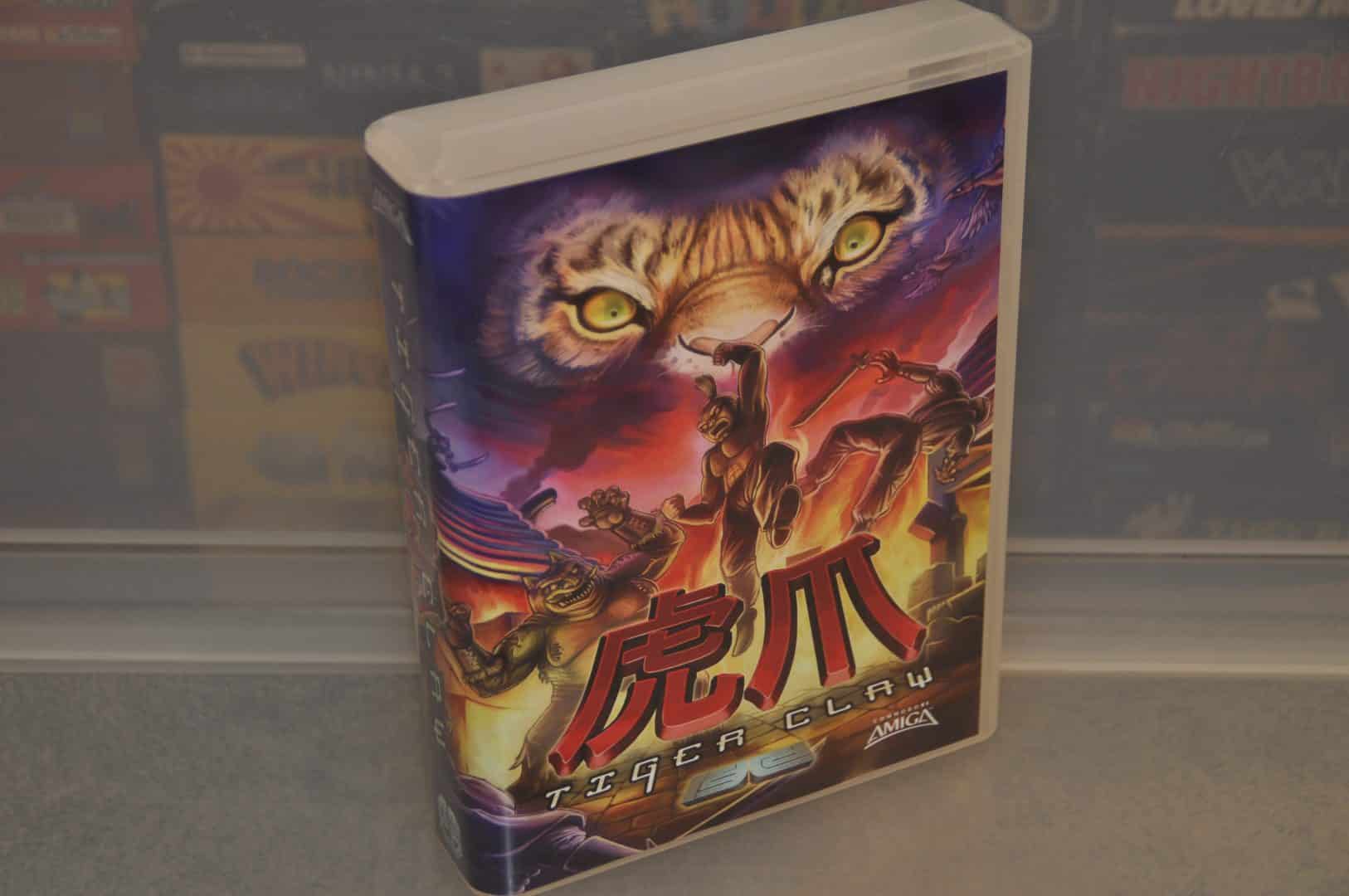 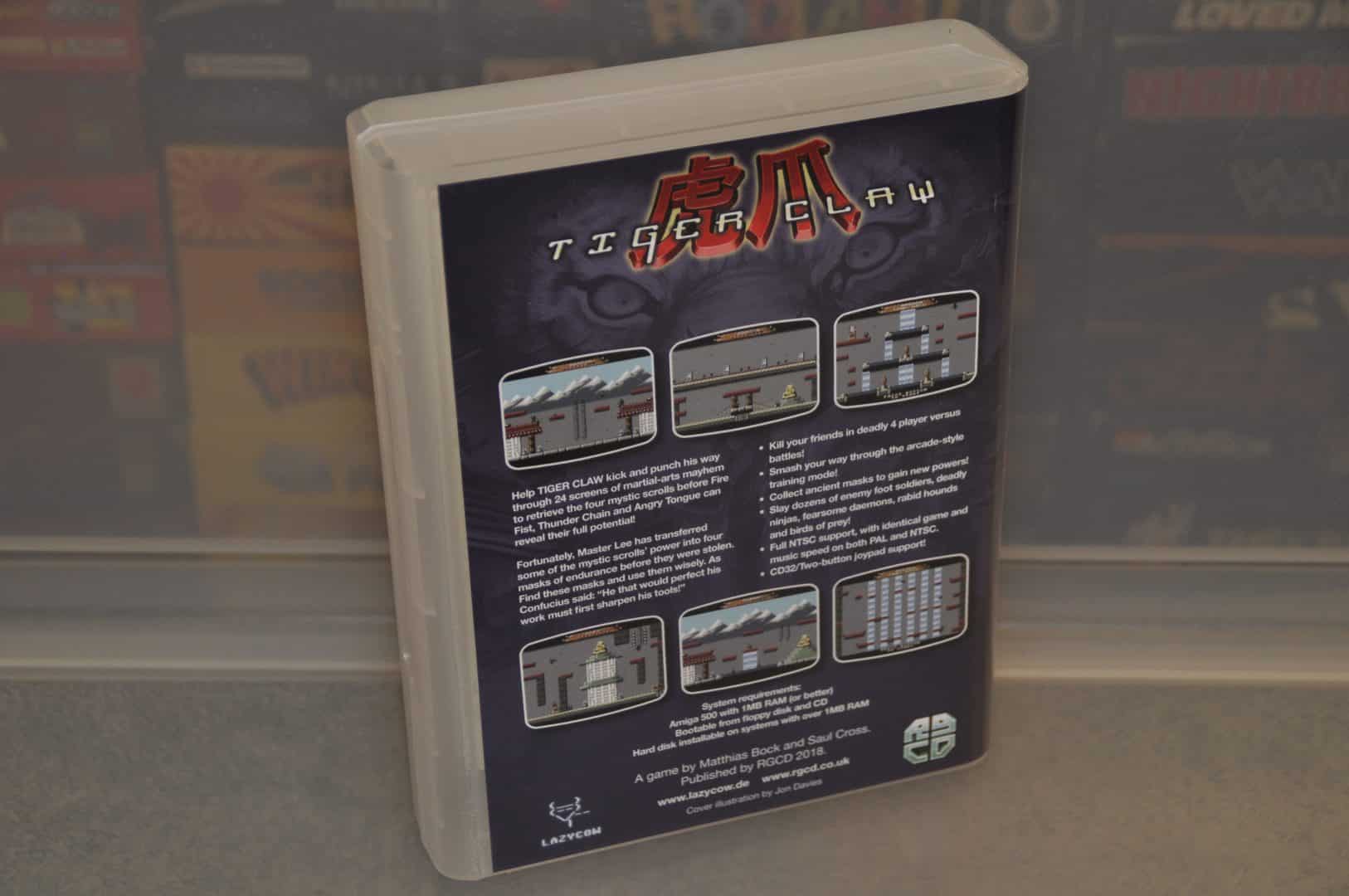 Another impressive box from RGCD here and while I love cardboard boxes the most I must admit that these boxes feel so fresh and cool.

The front looks incredible and so over the top that could be possible for a game like Tiger Claw, great use of colours and style, I love it to bits!

The backside of the box just edges the PowerGlove Reloaded in terms of colour use and design, two very well made boxes for sure but the backside of this one is my favourite. 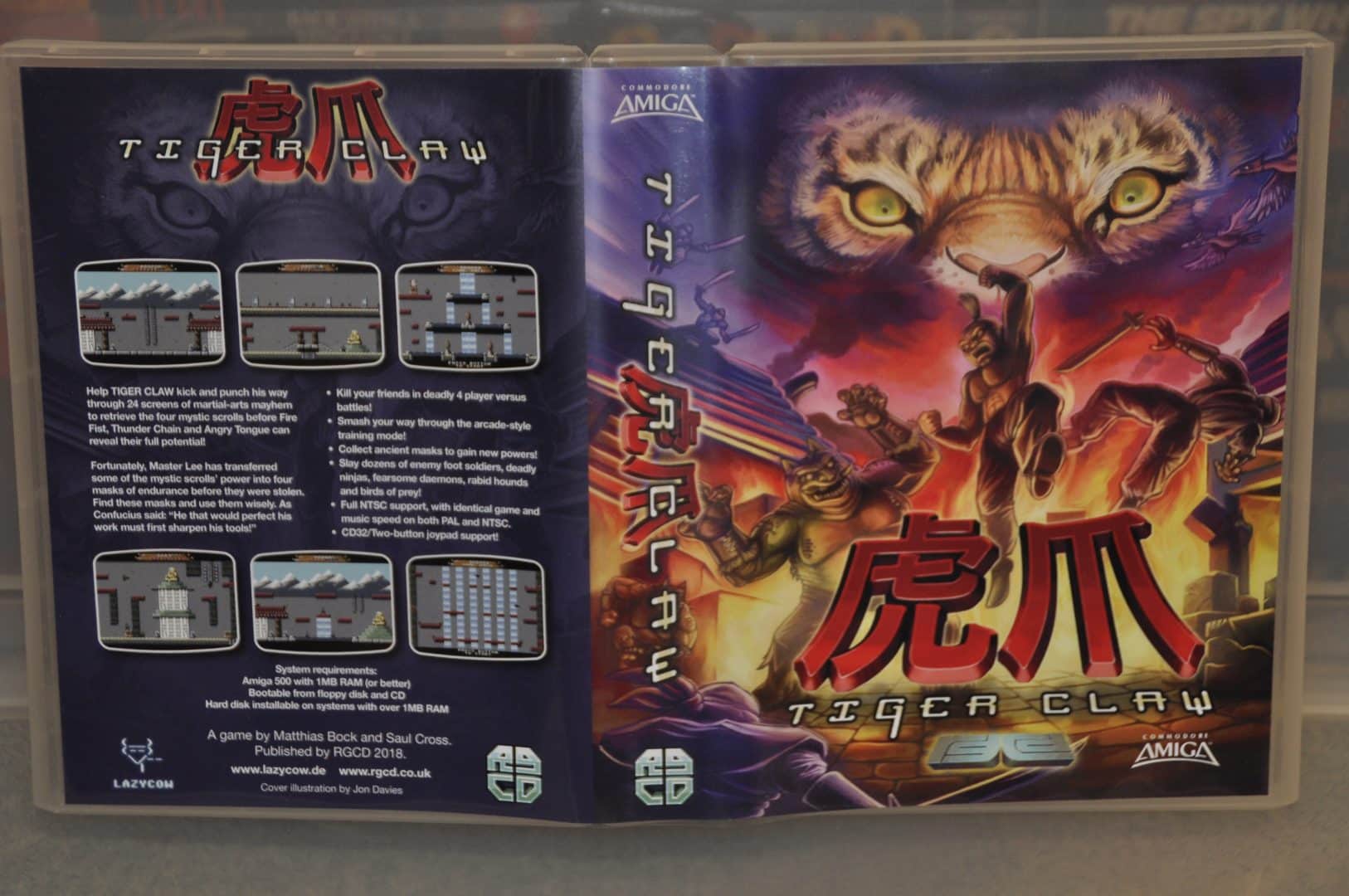 It looks bloody brilliant, doesn’t it? 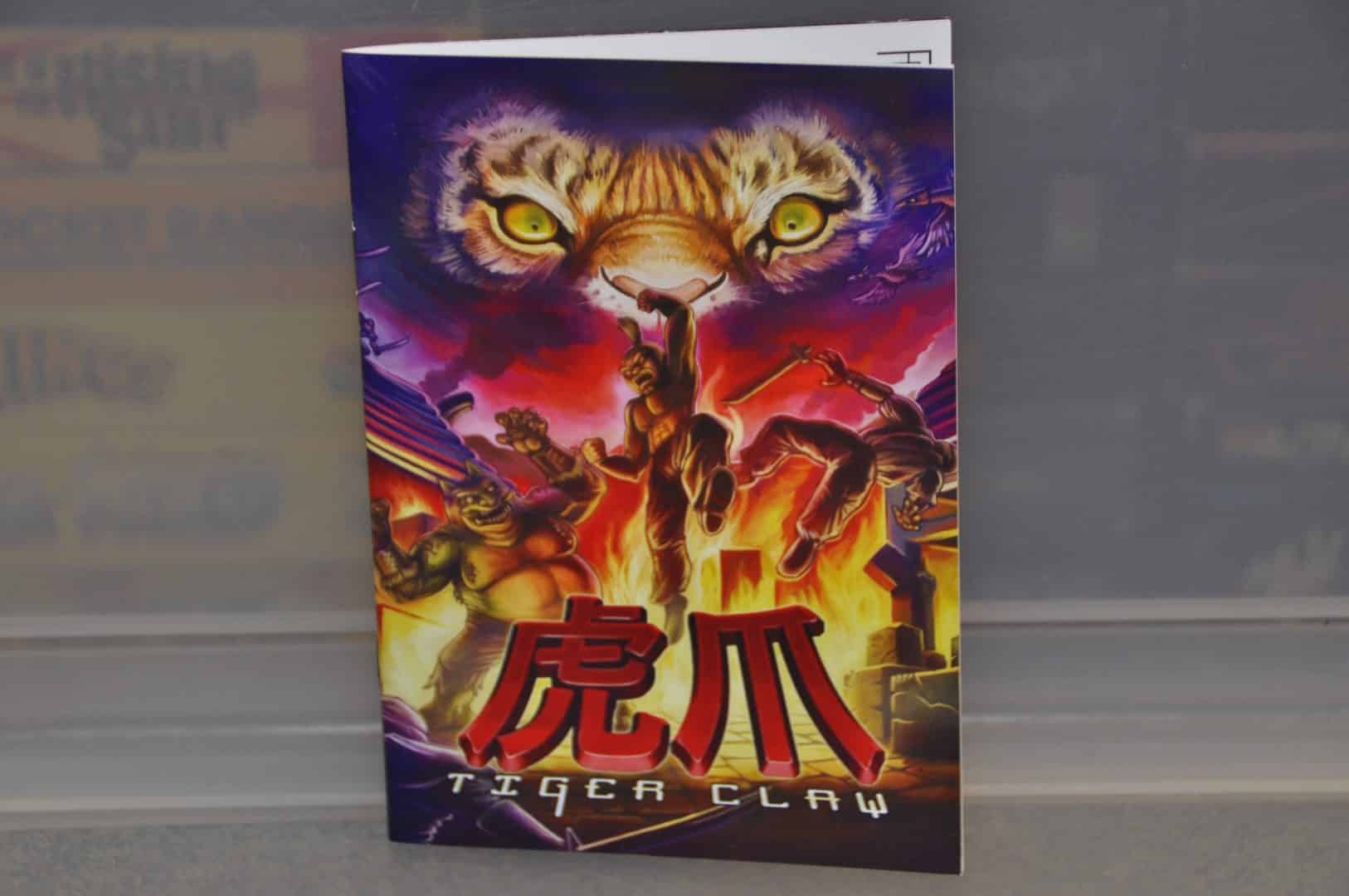 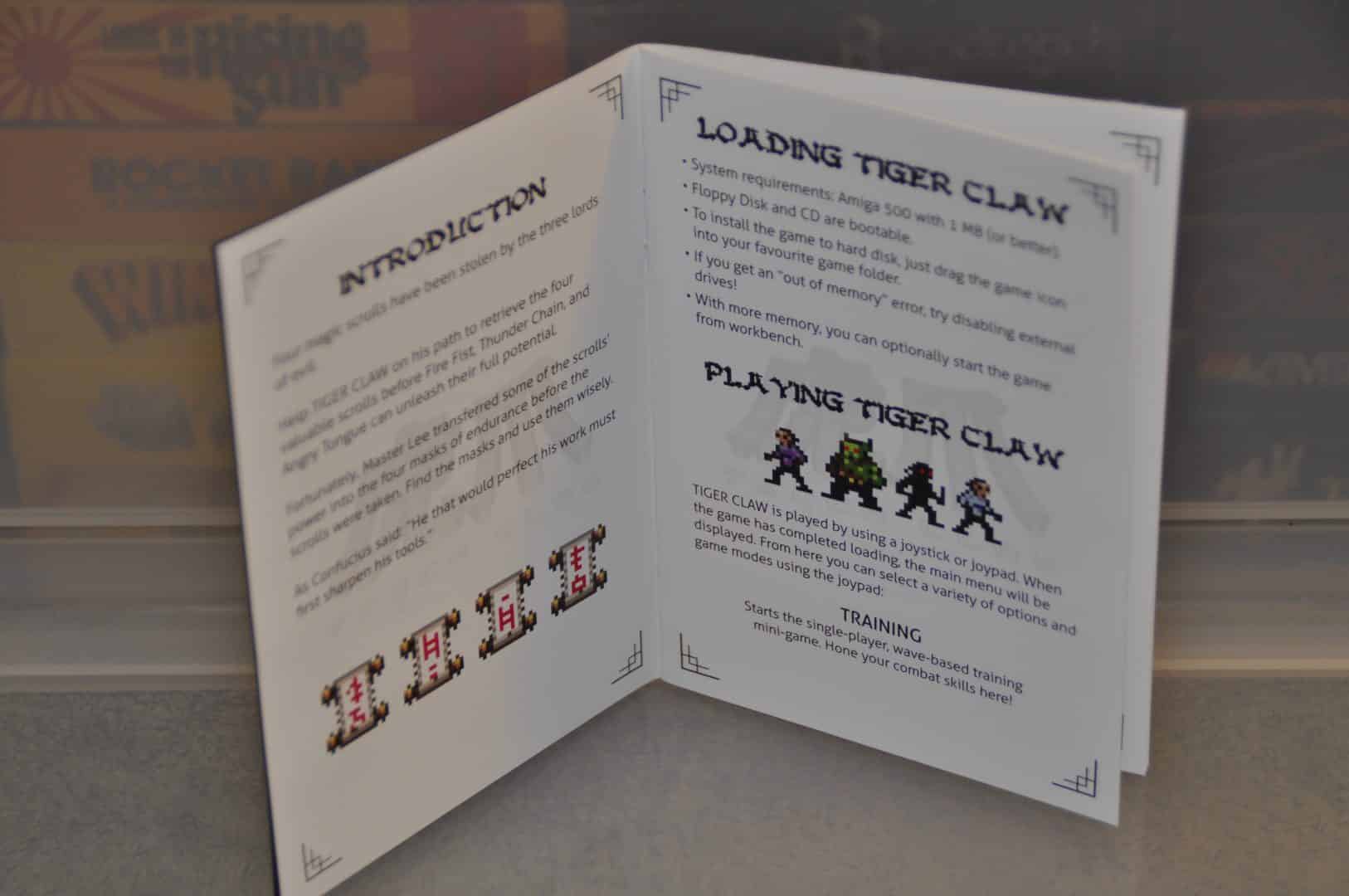 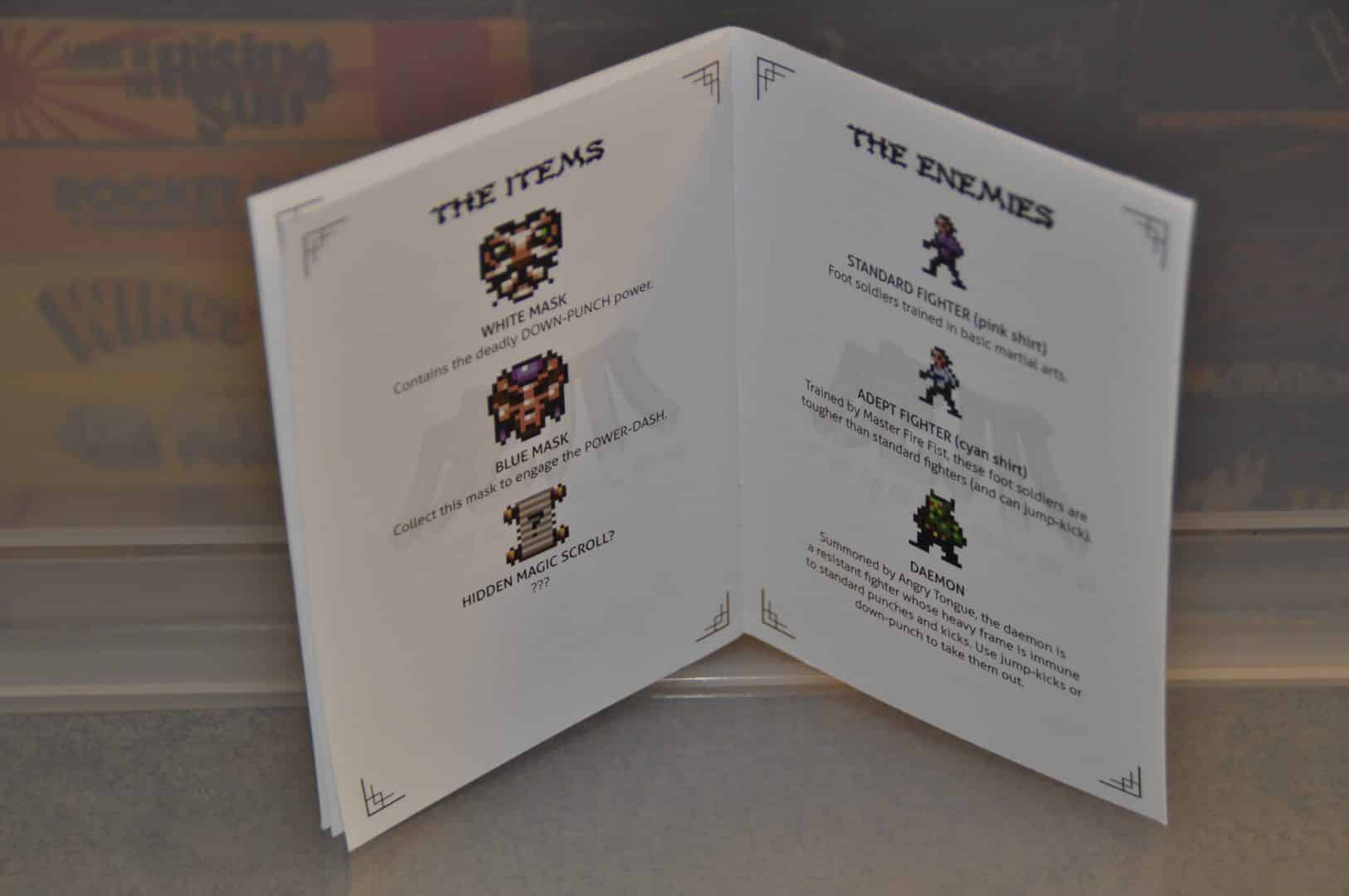 The manual looks great, quite a few pages and again they impress with the print quality. 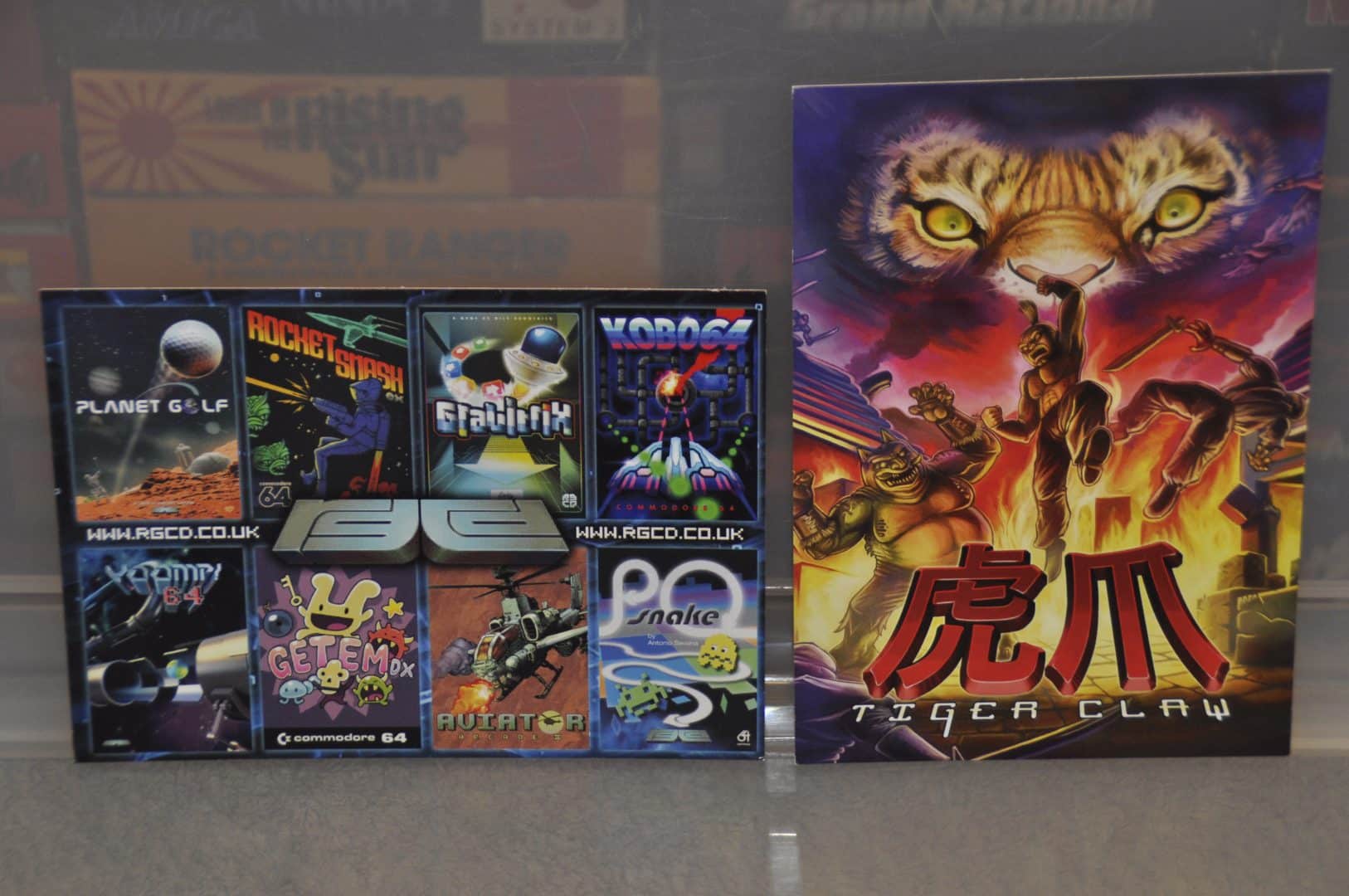 Postcards are common collectables in boxes on all platforms for some reason so there are naturally some in this box too, awesome print quality again.

RGCD certainly got a few ace games out, some of them are on the Postcard to the left. 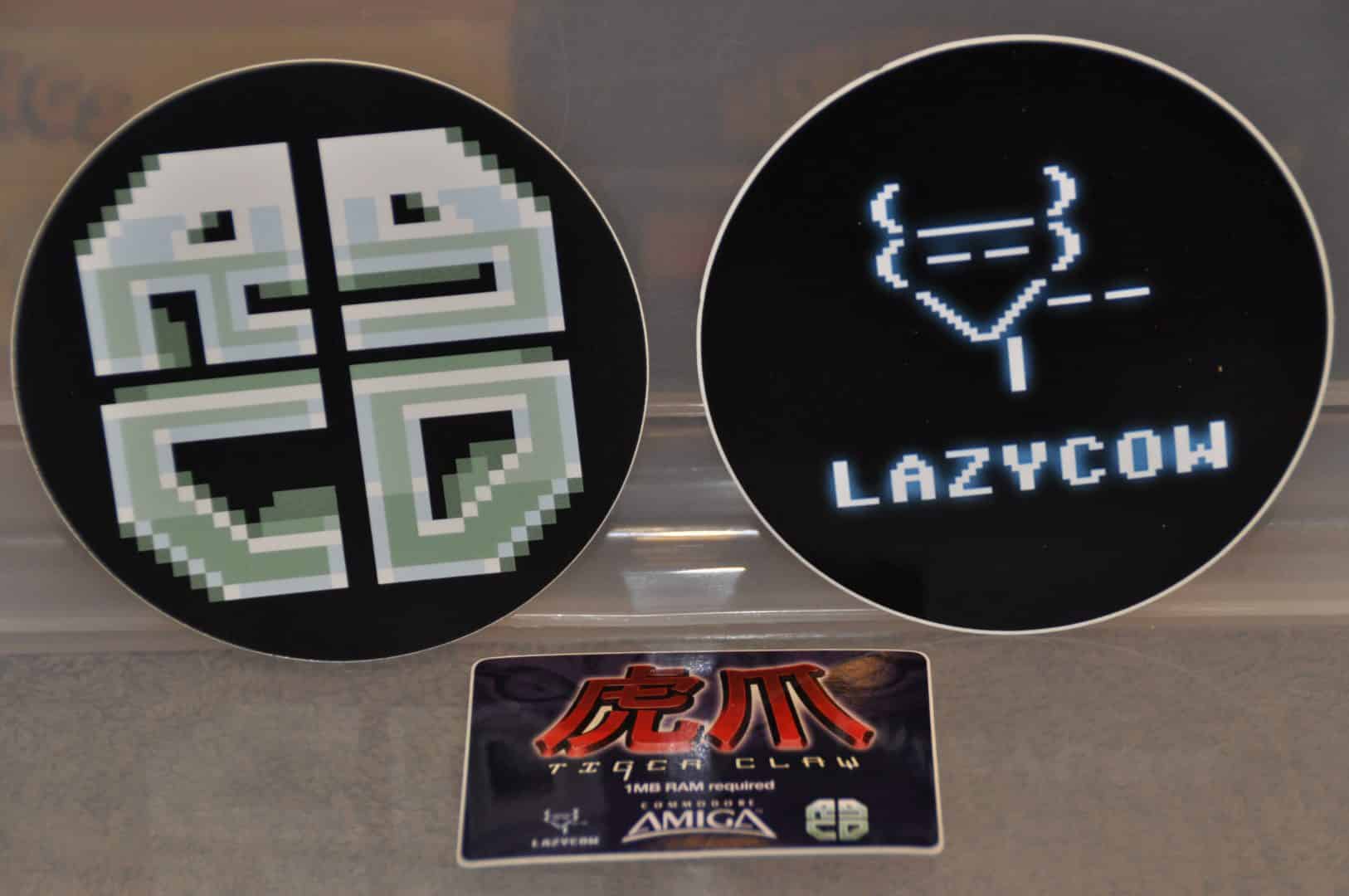 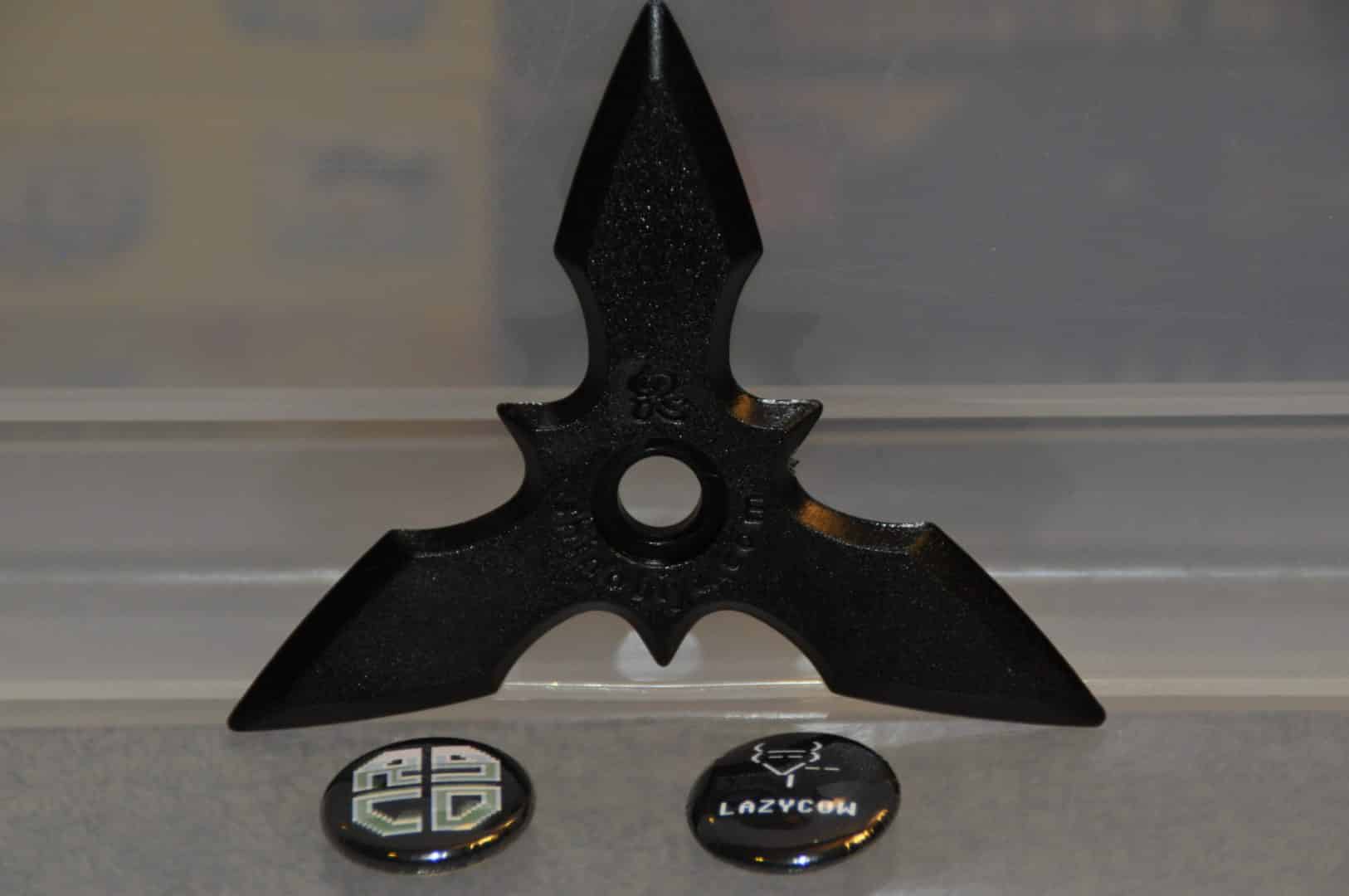 A pretty cool Ninja star is included in the box, it is not a real one though as it is made out of soft plastic(of course!).  There are also buttons or rather pins included too, two of them and while they might not be stunning looking i still like them and i won’t forget the name Lazycow for a while now. 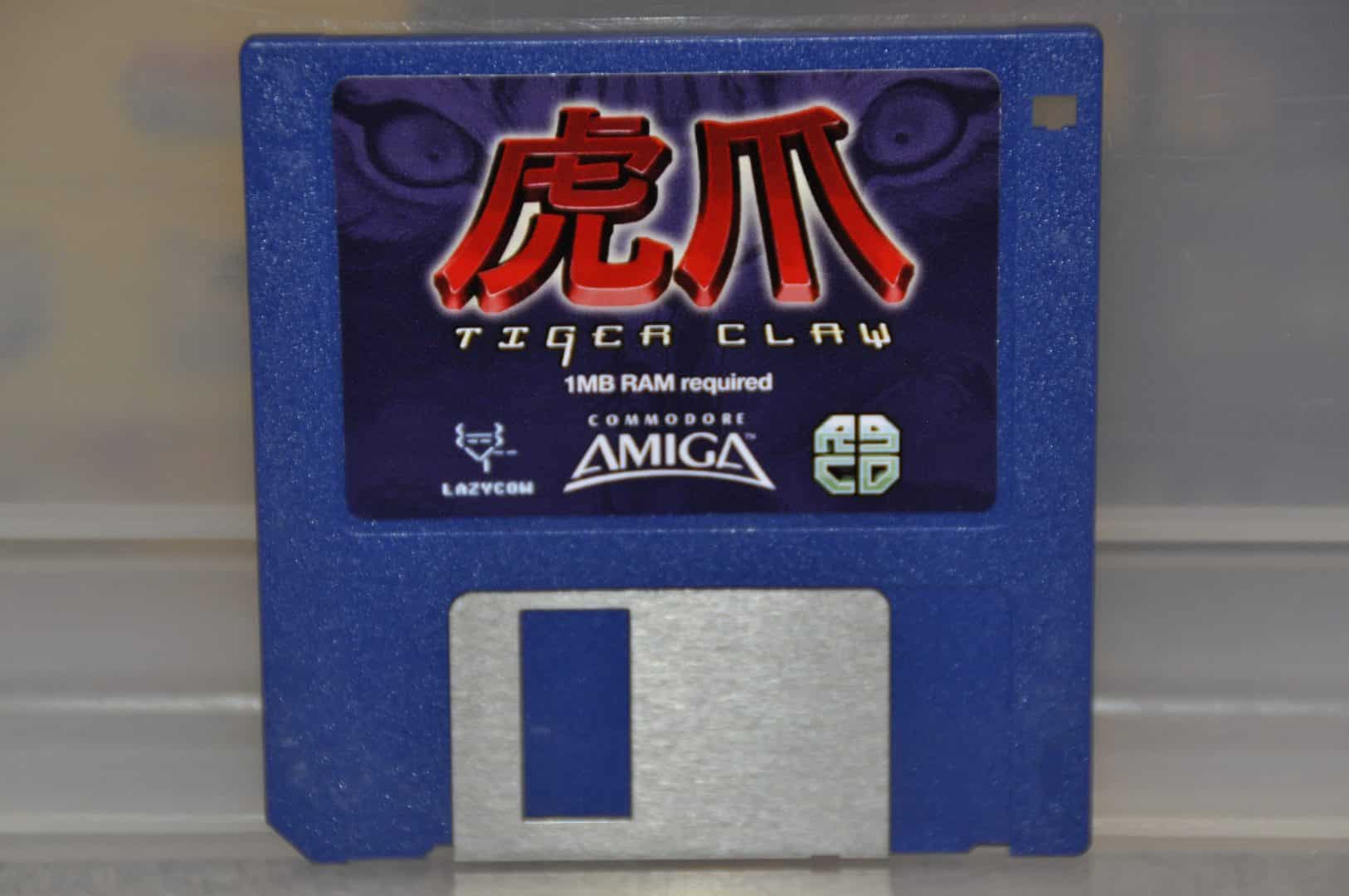 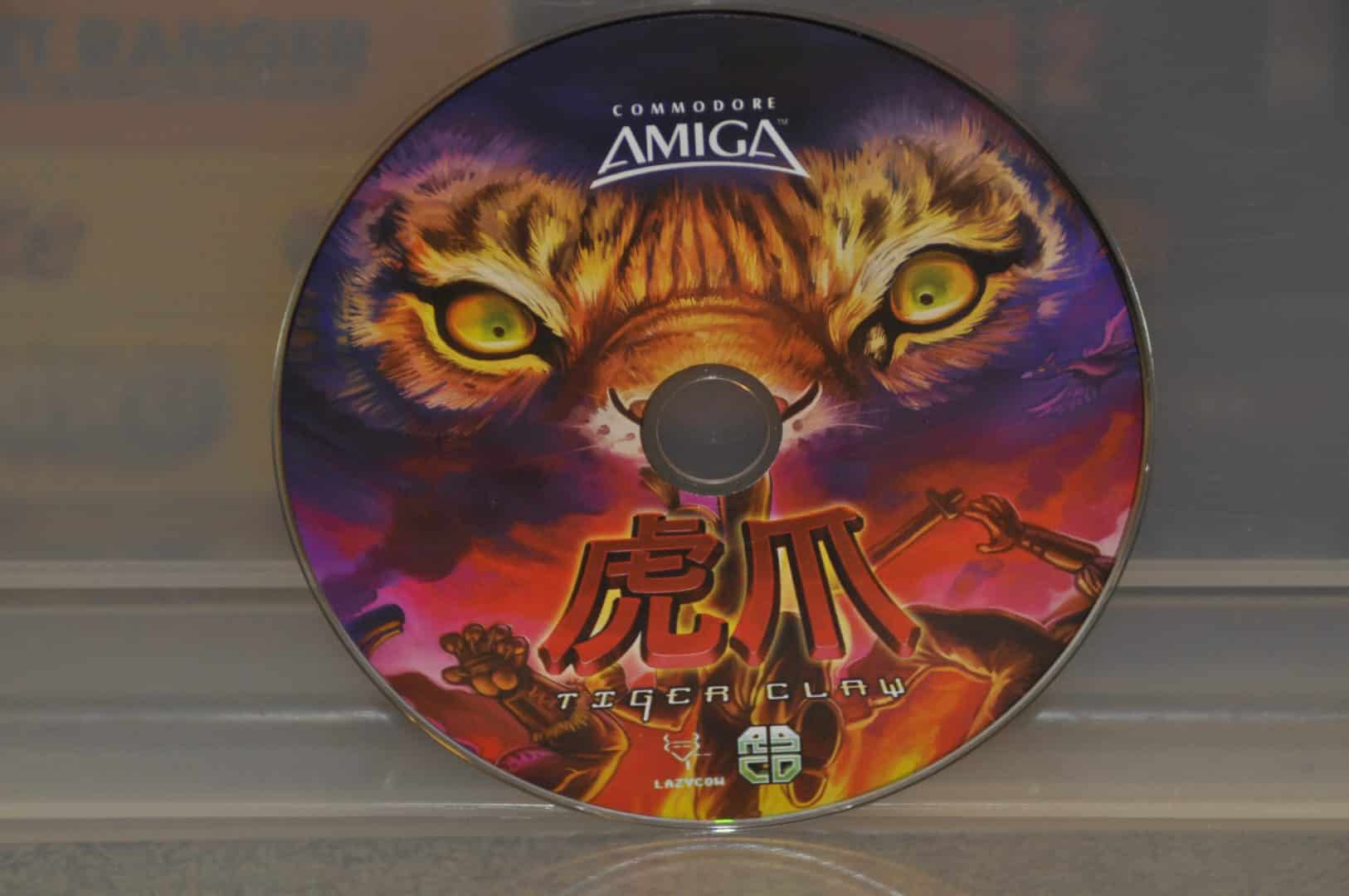 The CD is also not a cheap CD-R with a label on top, a proper pressed CD. 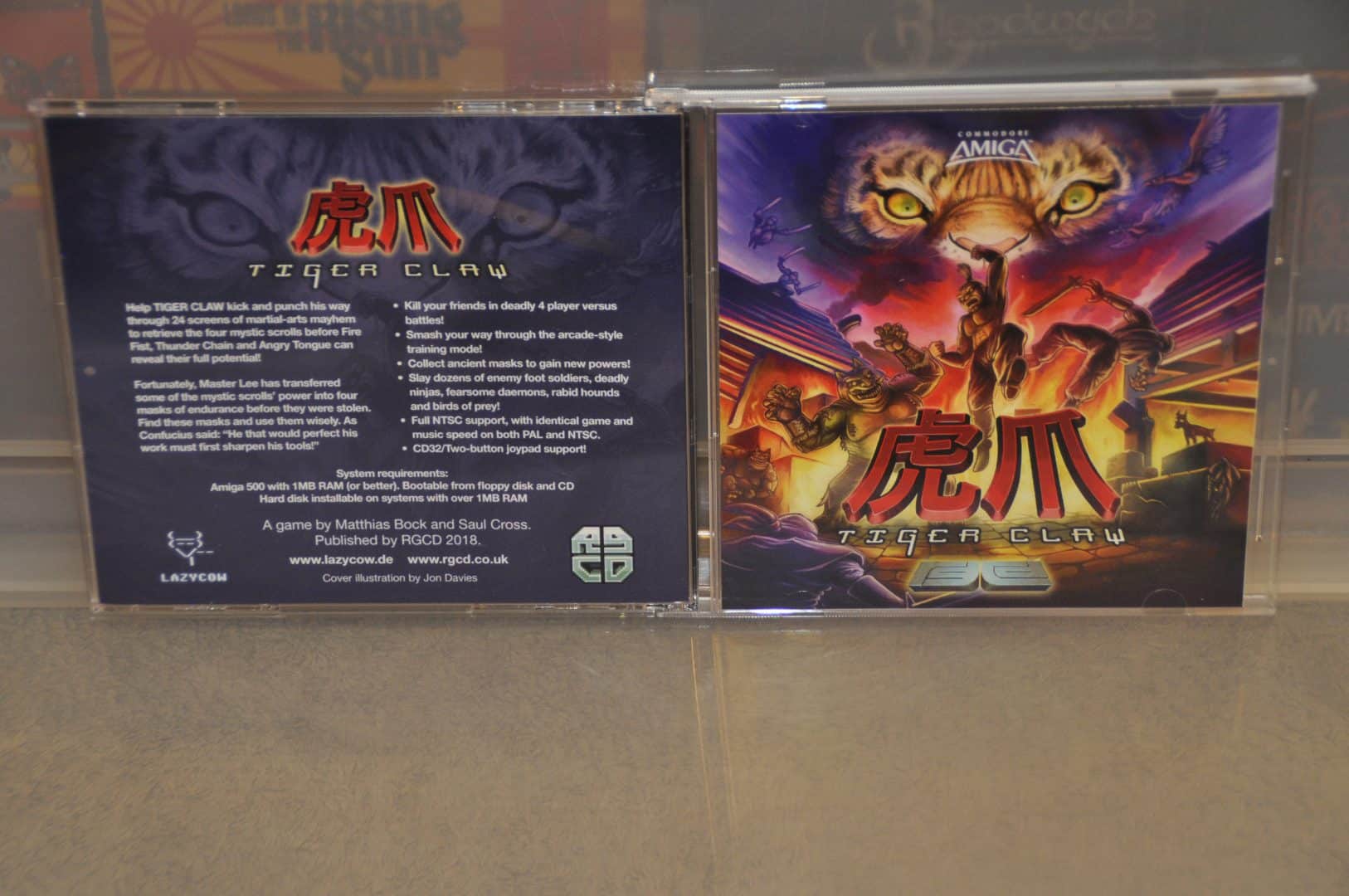 The jewel case for the CD looks really good too, great use of colours and skill and the only downside is that it doesn’t show any screenshots or whatever. 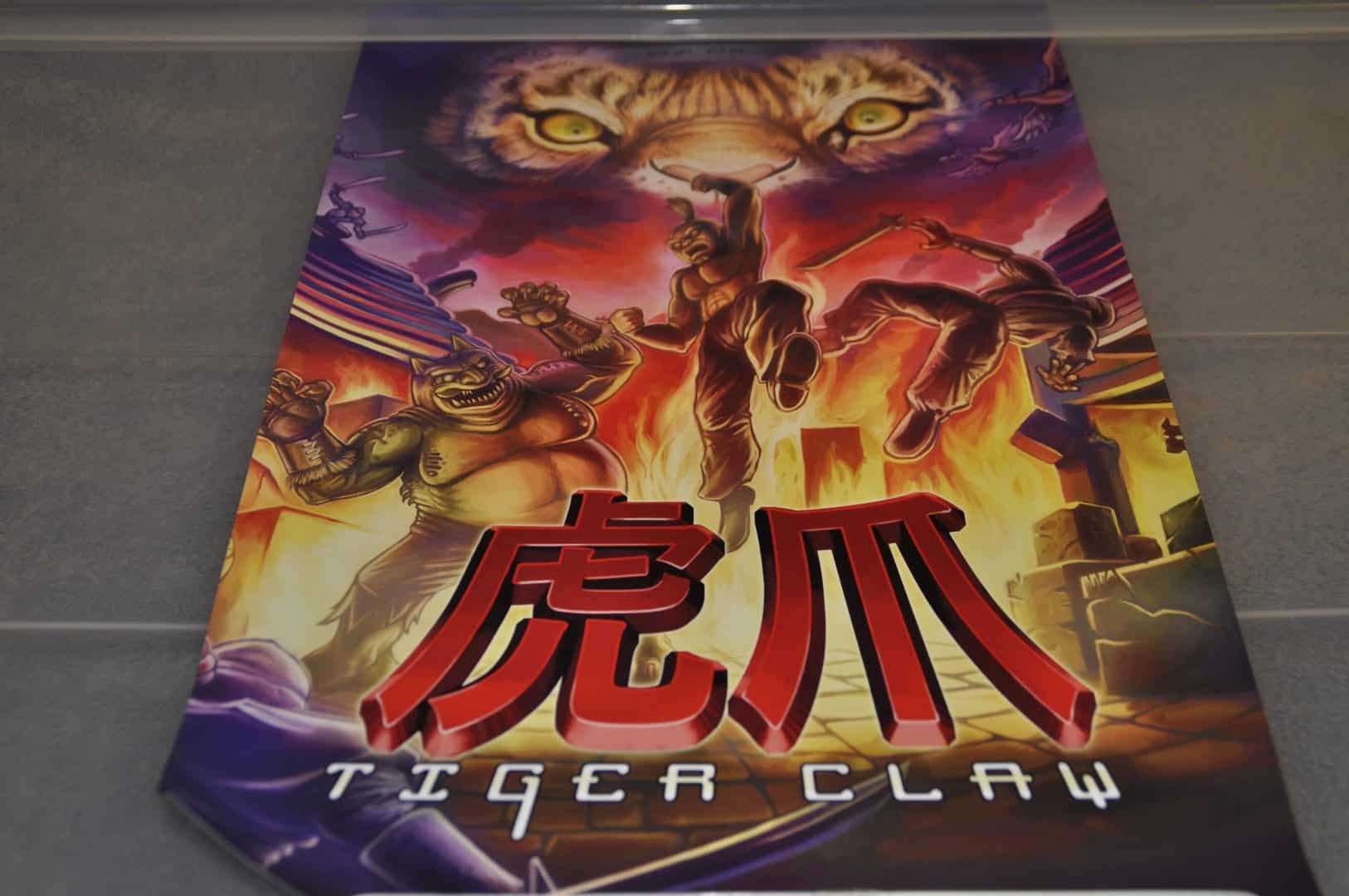 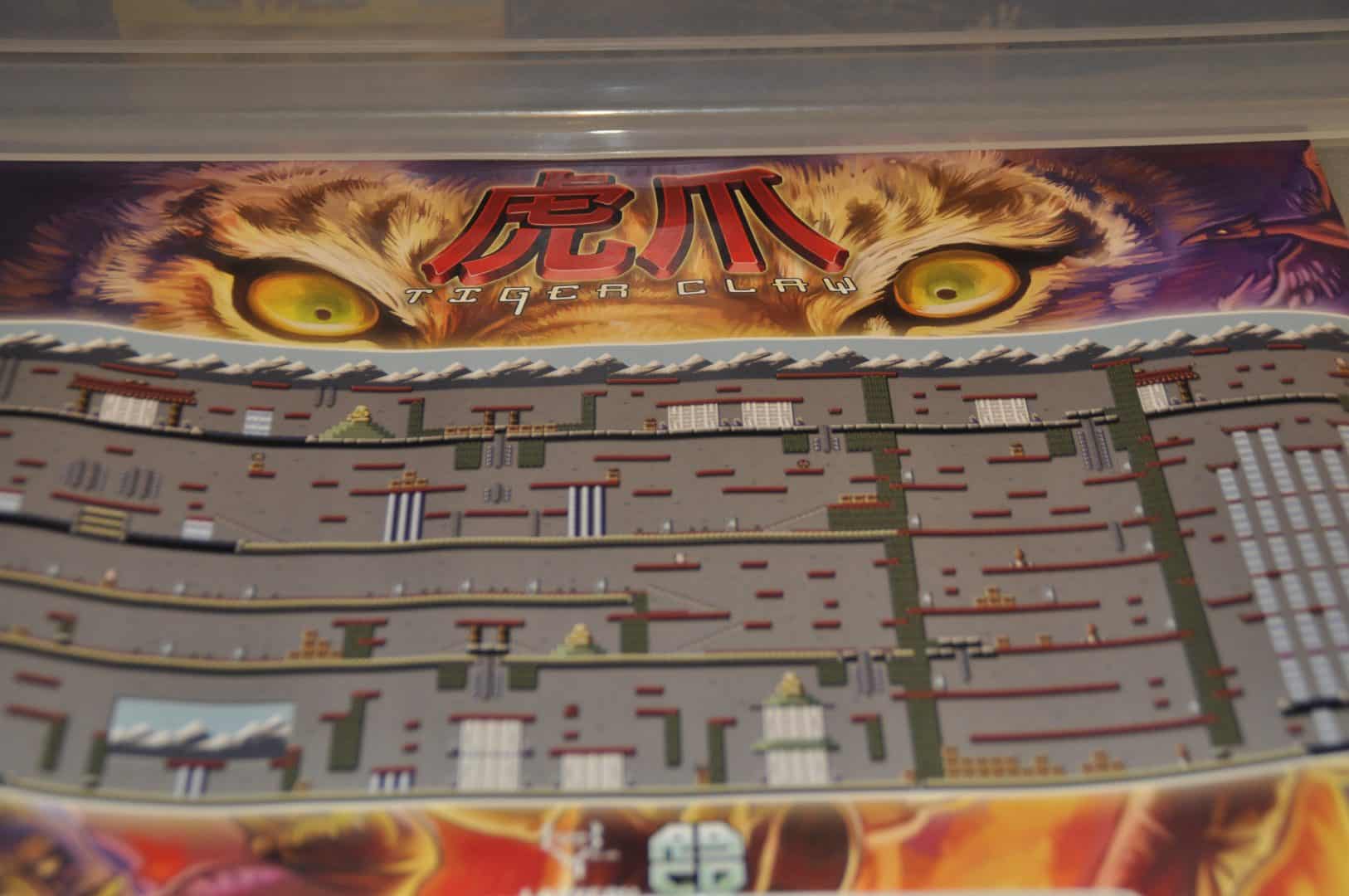 The backside of the poster shows the levels from the game and oh boy does it look awesome,  the best backside of all posters in my collection so far. 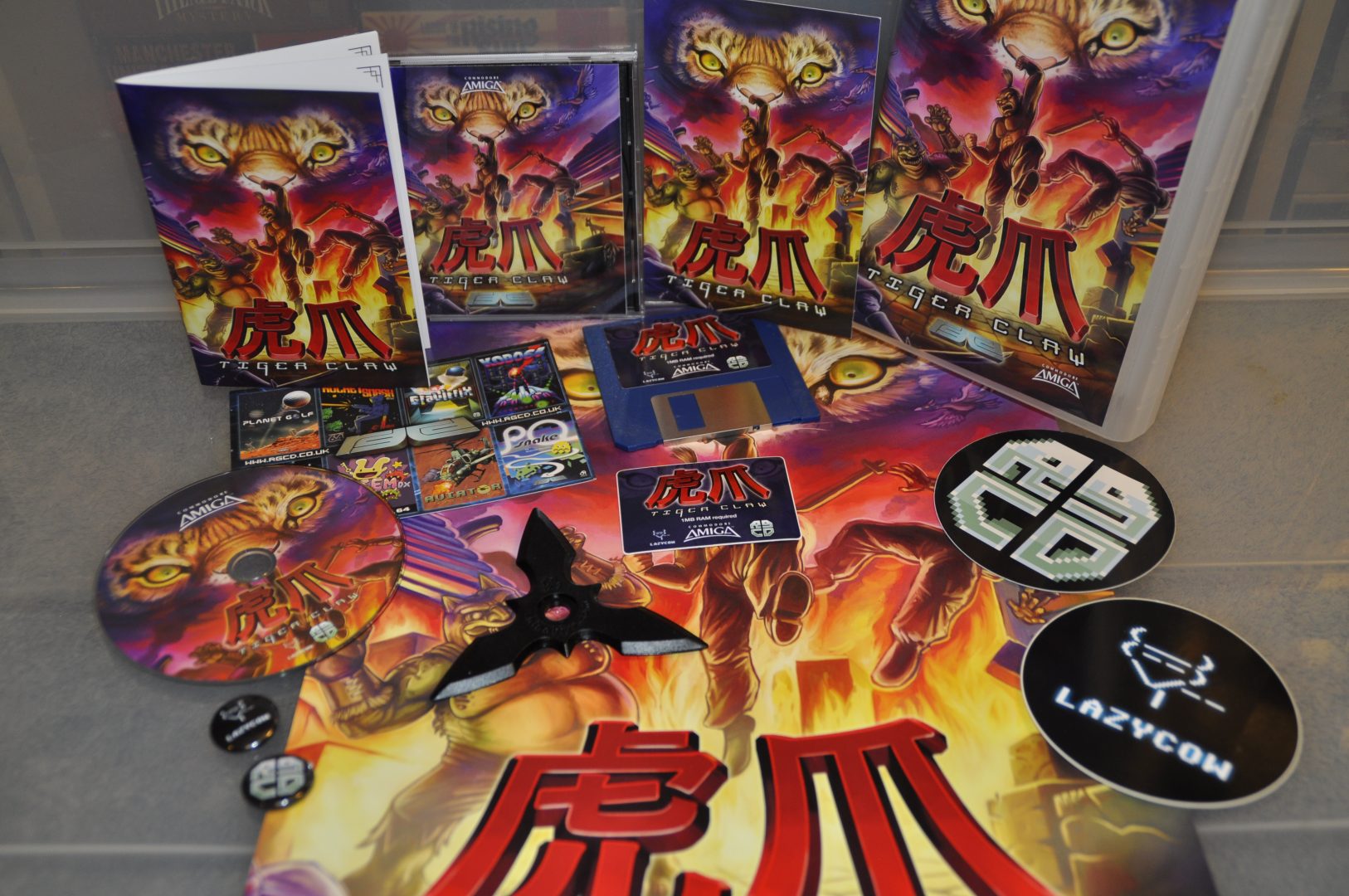 Here is all the stuff that came in the box, a brilliant package and best of all is that it’s cheap too, £15.00 GBP is the asking price which means this is more or less a steal. Go grab it now before it is too late.

So, what about the game then, Is it any good?

I really loved the Data East Bruce Lee game on the Commodore 64 and Tiger Claw is looking very similar but the mechanics are just too slow it just feels so cumbersome to play, there ain’t much feedback given when the player gets hit or hits another and after a while I just put it down because i get too annoyed playing it, with that said I am sure i just need more practice (Easy mode is there too and i recommend you start there).

There are some really cool things about the game which make it worthwhile though, a really fun party mode which supports up to 4 players and yes the game supports CD32/two button sticks too to make it easier to do precise jumps etc.

The music in the game is not bad either, it sets the mood from the very first sample you hear and yes it does have that typical Ninja type of music as you’d expect from such a title.

There is also a classic mode in the game which switches to the original C64 graphics.

I must admit that I expected way too much from this game, I always wanted to try the C64 version that this one is based on and yes I expected this one to be a proper Bruce Lee beater.

Lazycow did well though, the release is good and there are a lot of fans out there that enjoy it and most of all the box looks absolutely amazing next to my PowerGlove Reloaded box.

You can grab the game as a download-only for only £2.99 GBP or this boxed version  for £15.00 GBP and yes the digital-only version is very cheap so if you want to give it a punt without spending too much then do it, you can’t wrong really as even if you hated the game, in the end, you still supported the developer.

Follow Us... Inspire Us To Get Better... Keep The Flame Alive
The Division 2. Cinematic Storytrailer And Latest News A Look At Mazinger Z. C64 Video Game

7 thoughts on “A Look At Tiger Claw Collector’s Edition”