This box is a couple weeks old now, but as always i am late to the party due to me being too focused on other things.

The first Watch Dogs was a very overhyped title and i have not really tried it all that much sadly, but still, i went out on a limb to get this box – Thanks to Ubi marketing. I will give both games a chance this time around and i hope to do a comparison article too about both titles.

A bit of a trivia though is that Watch Dogs unboxing was actually one of the first (and a test) articles on this new blog 2 years ago. 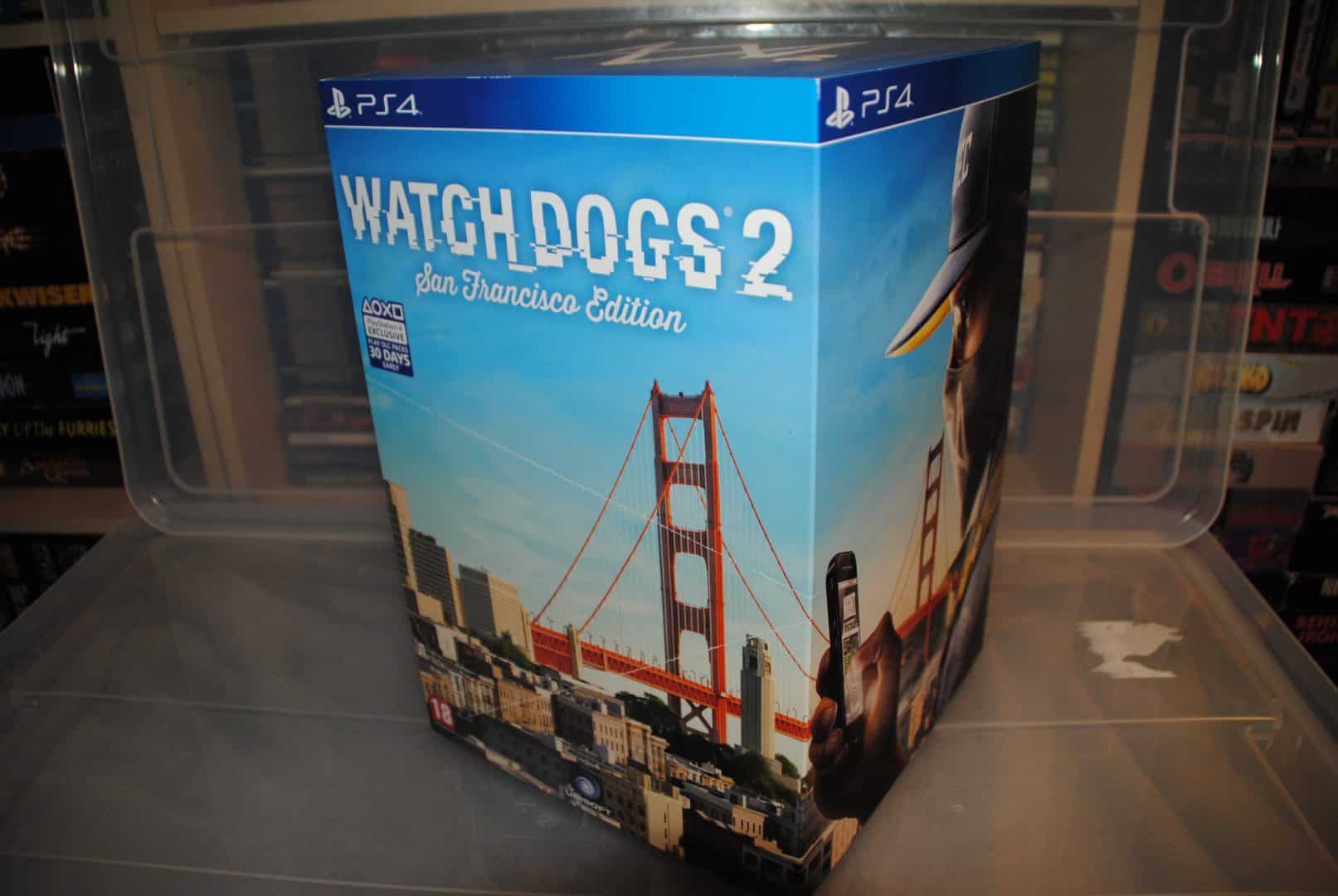 The Box design is nothing less than stellar, awesome colours and an eye-catching motive/ design, it been on the shelf for a few weeks now and it is certainly a good looking shelf piece. 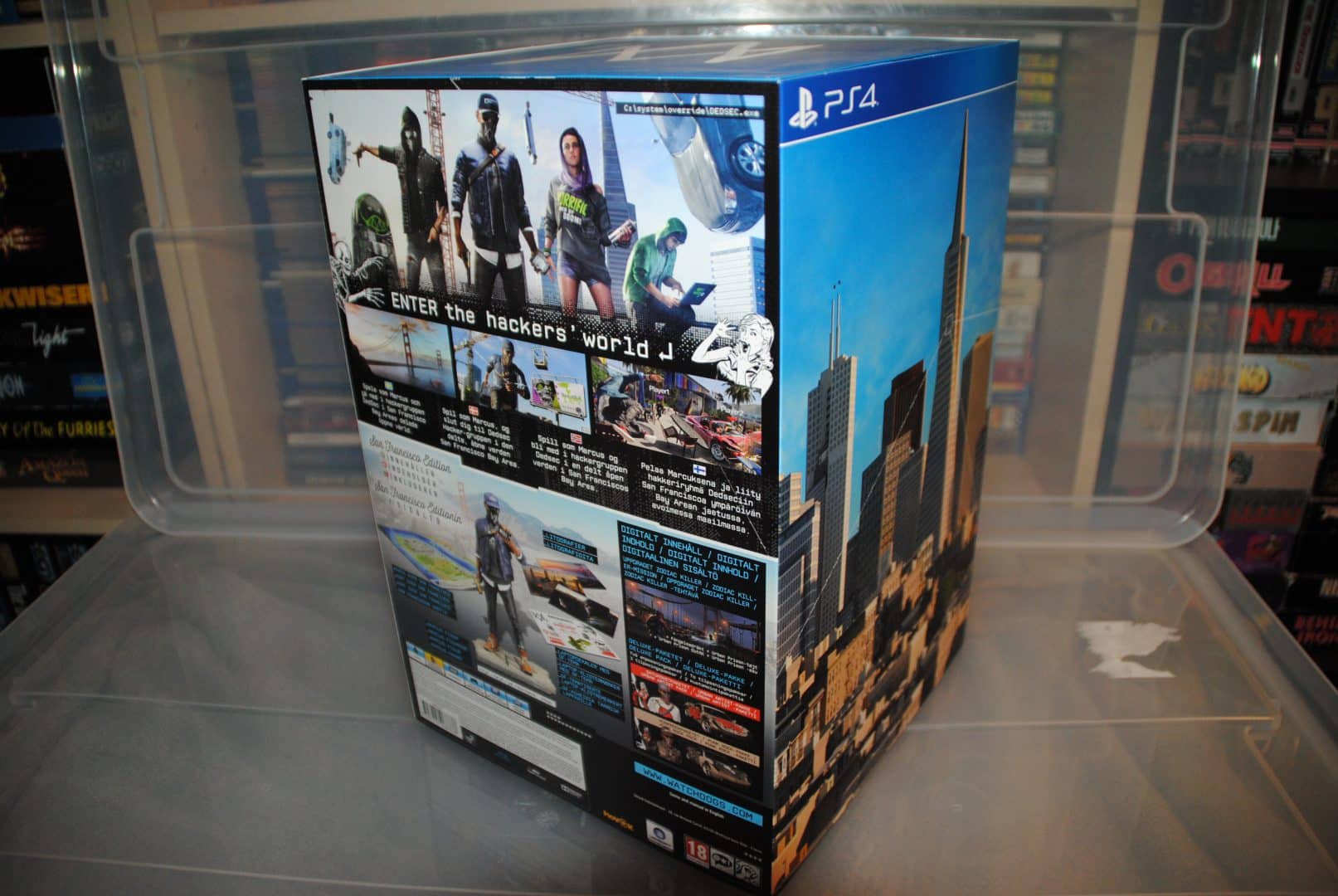 The back of the box is no exception, the typical Dedsec design from the first game is still present in the design here, good looking, neat and tidy too – if not “too much hacky”.

It is nice to see that they went for different images on all sides of the box too, interesting looking and good quality with beautiful colours. 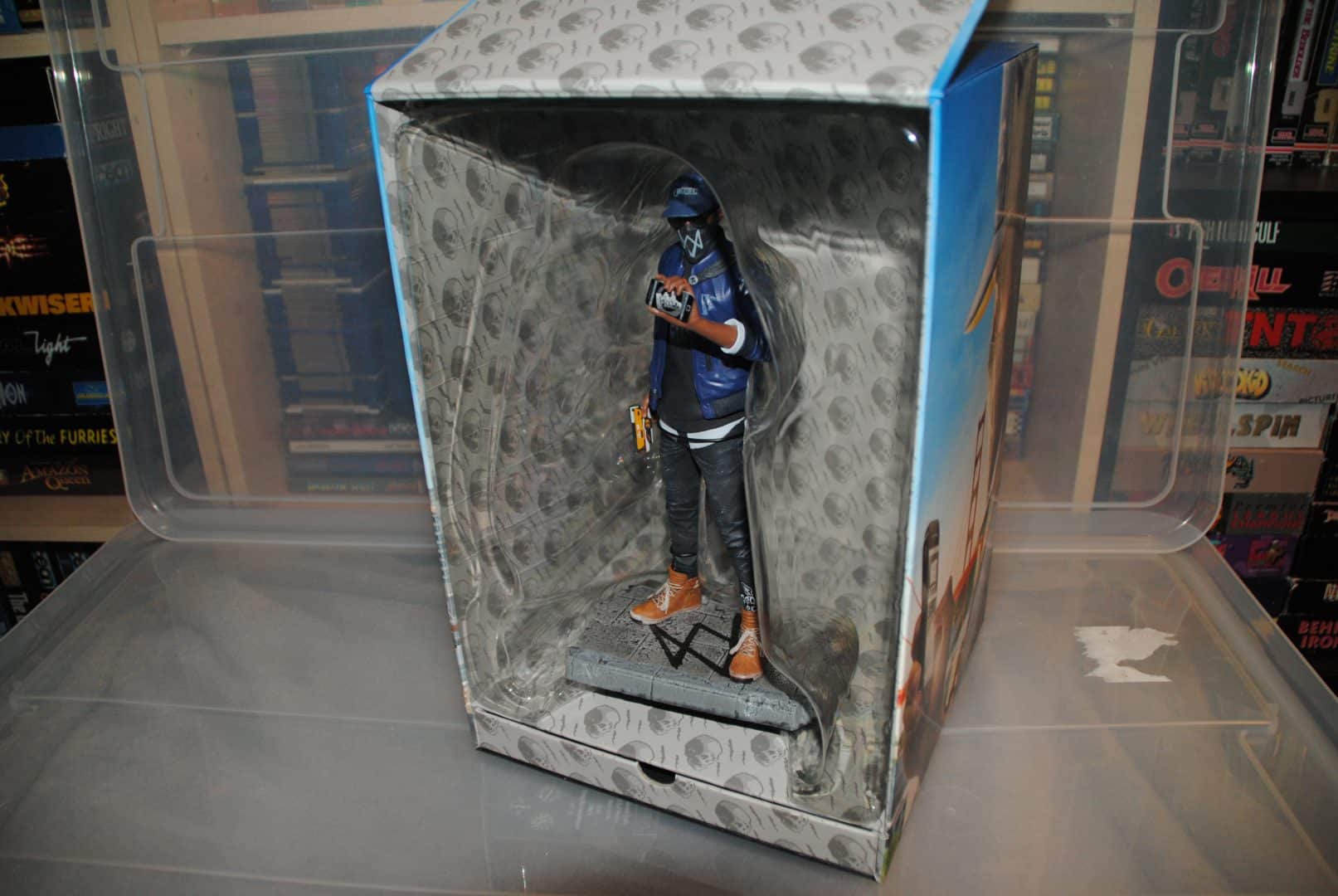 Ever seen this before?, yes the first thing i thought of when i opened this box was indeed Assassin’s Creed Syndicate , same type of box, the same type of “hidden drawer” and so on.

It may look the same and it might even feel the same, but the figurine is smaller, the drawer is less refined and so on (in other words, it looks like a cheaper knock-off instead of a copy). 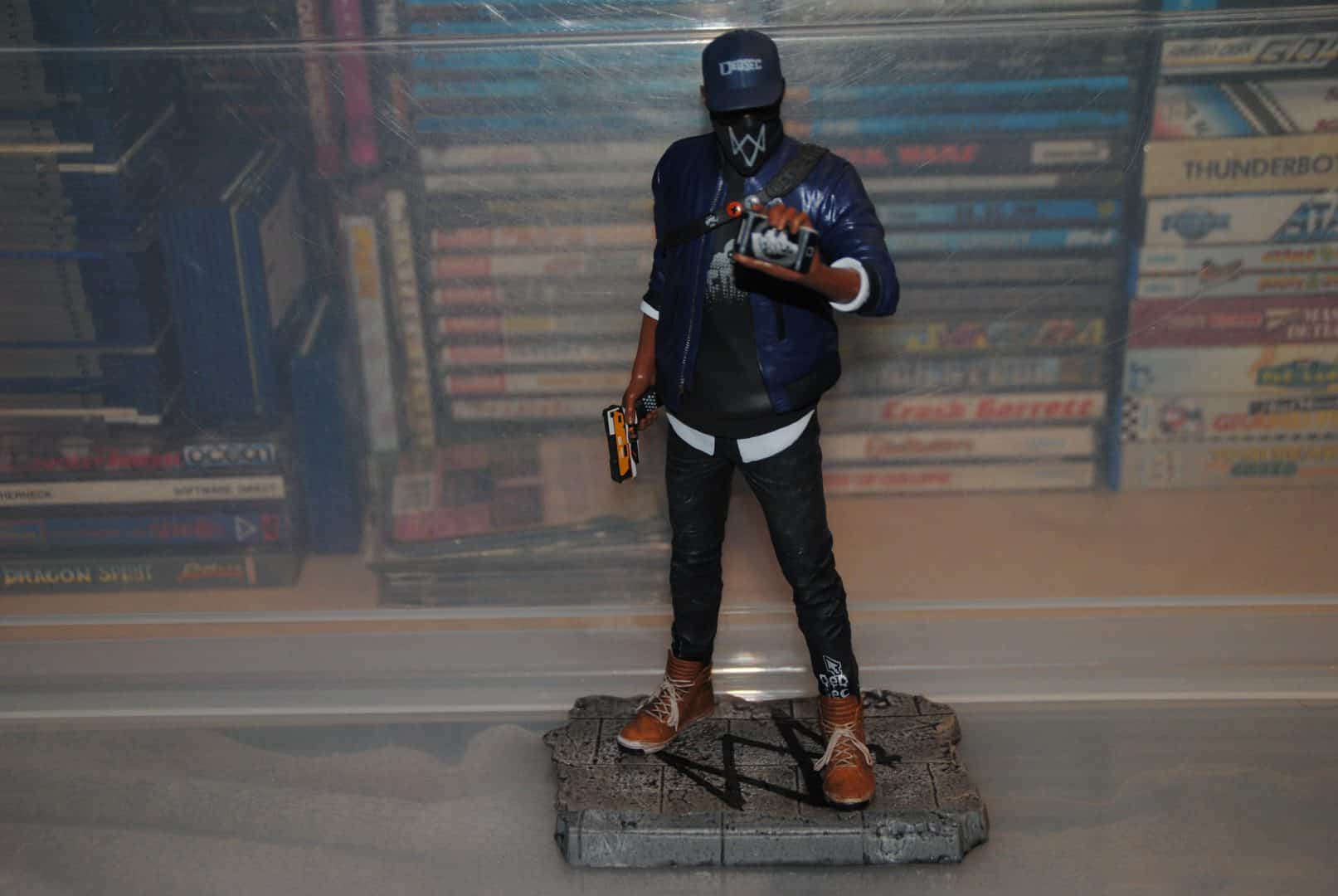 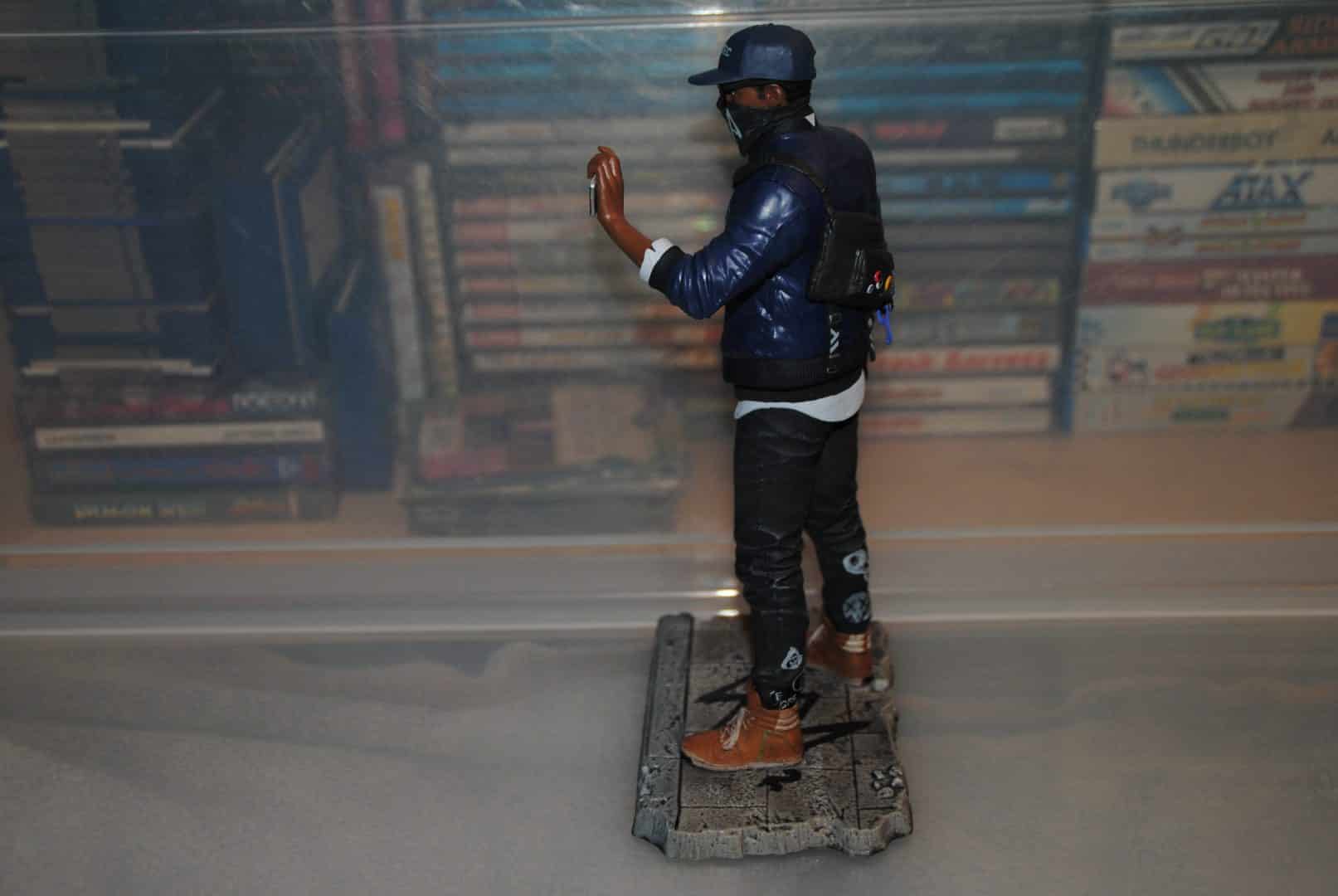 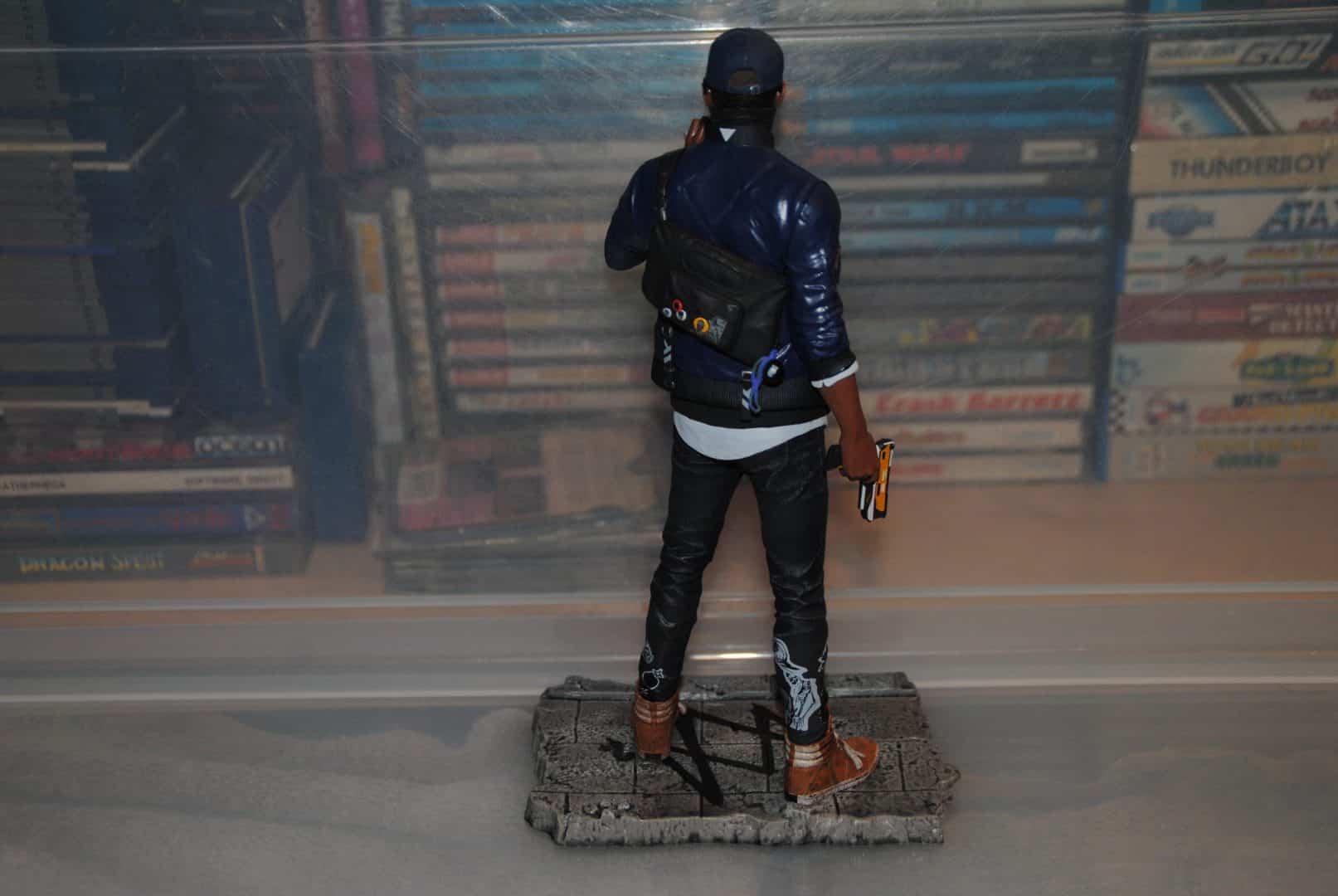 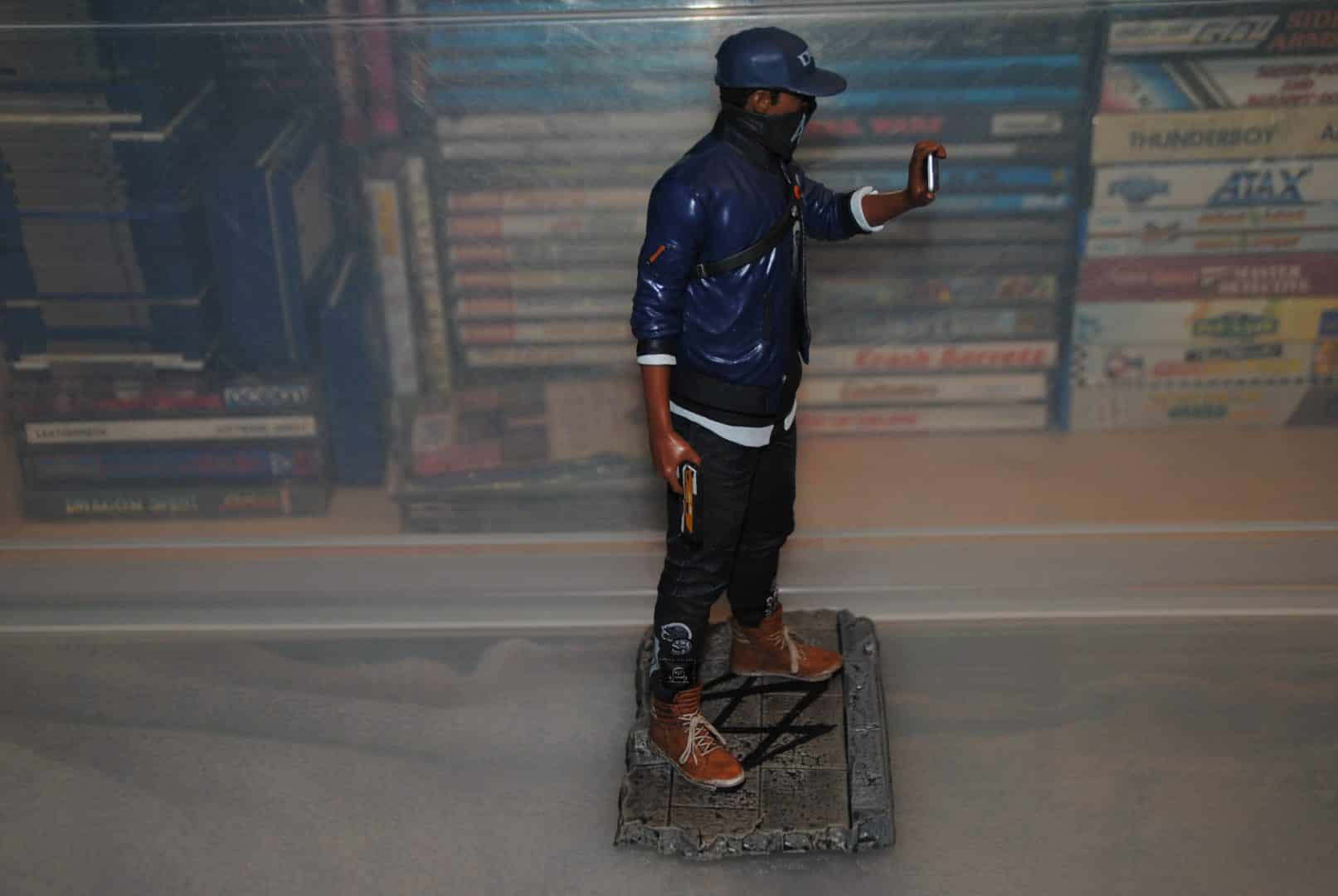 I guess this is where you thought the figurine would be bad too?, wrong, it is brilliant looking, it may be smaller than the one in Syndicate and the one from the first Watch Dogs game, but it is still very solid – good looking and it feels far from cheap. 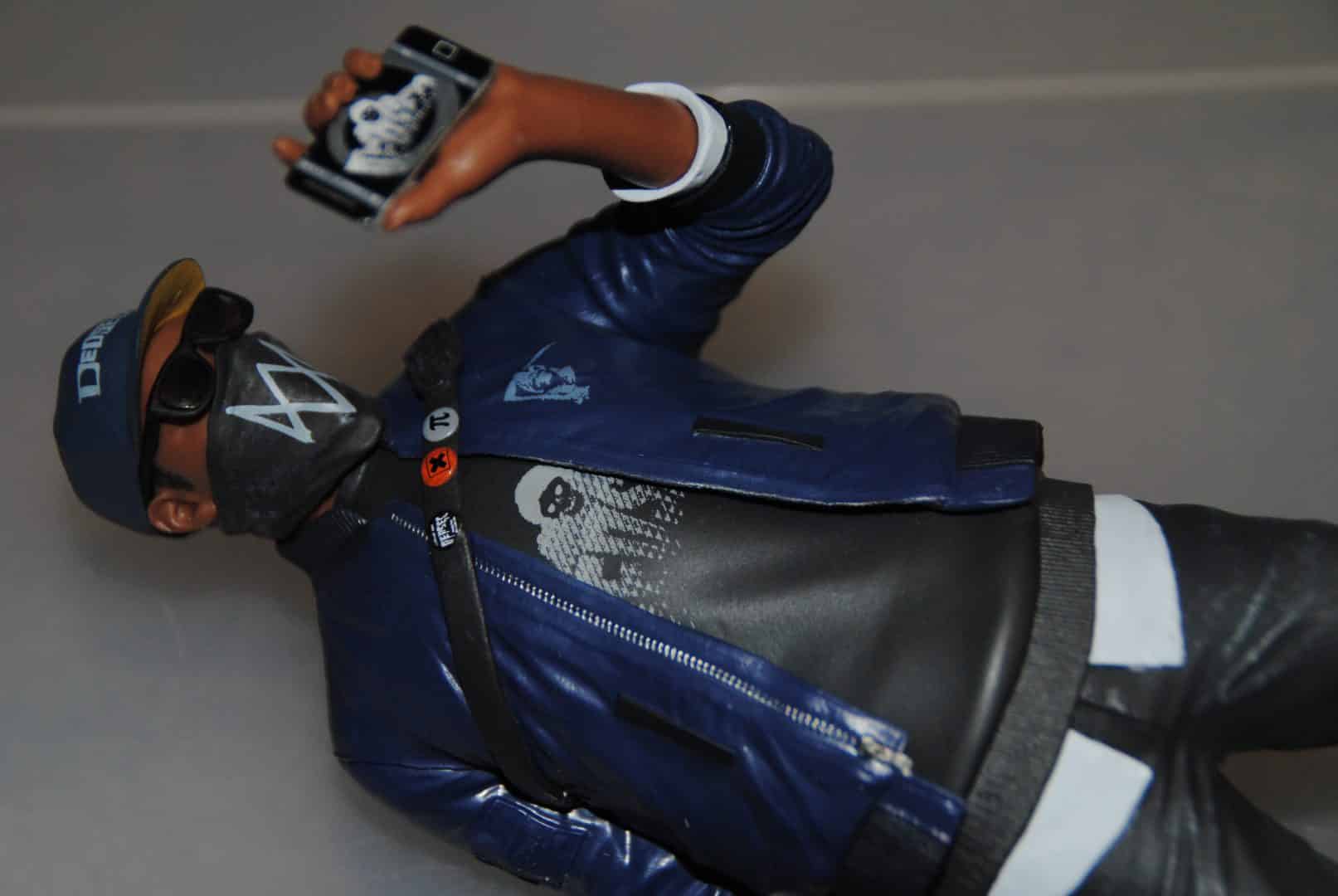 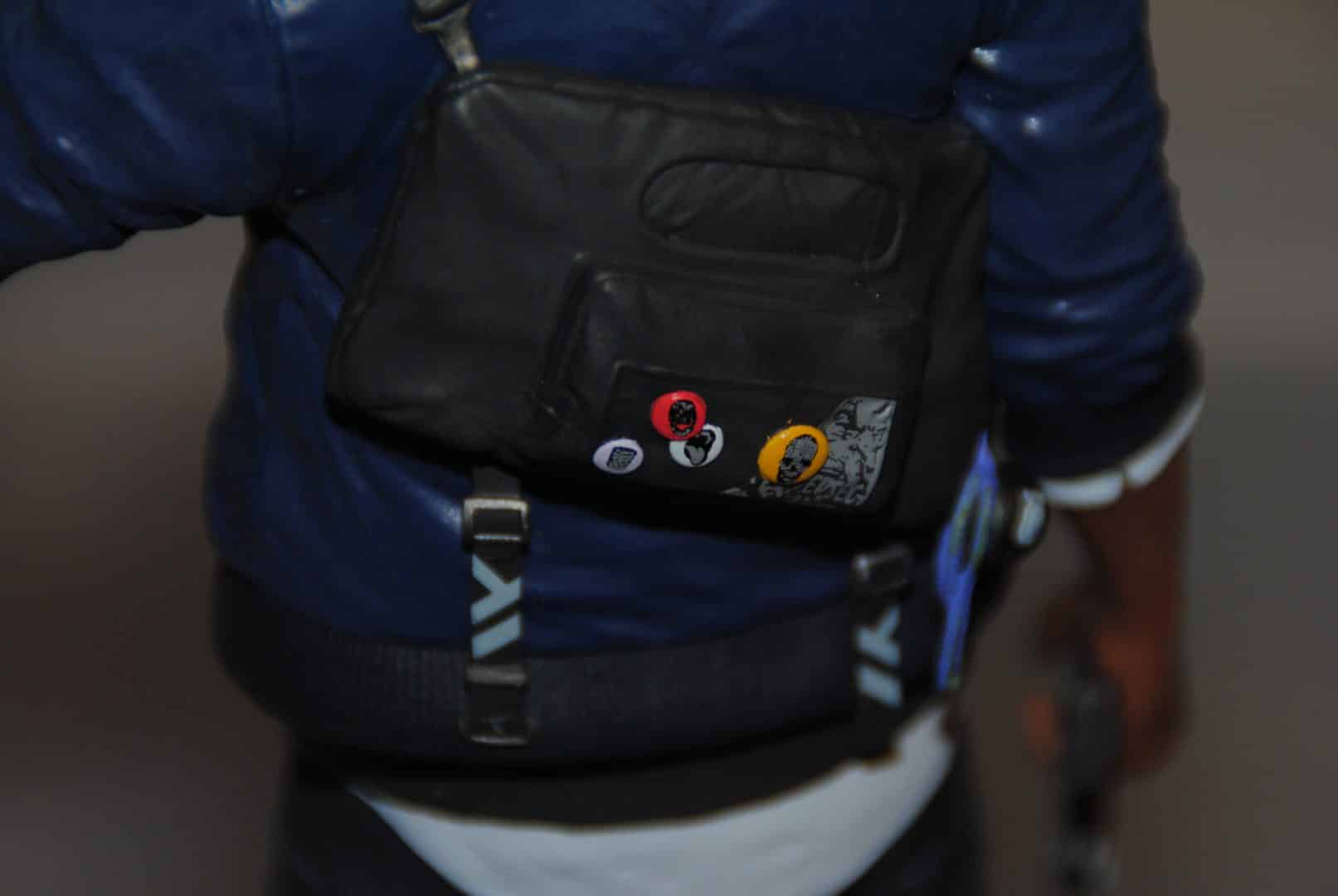 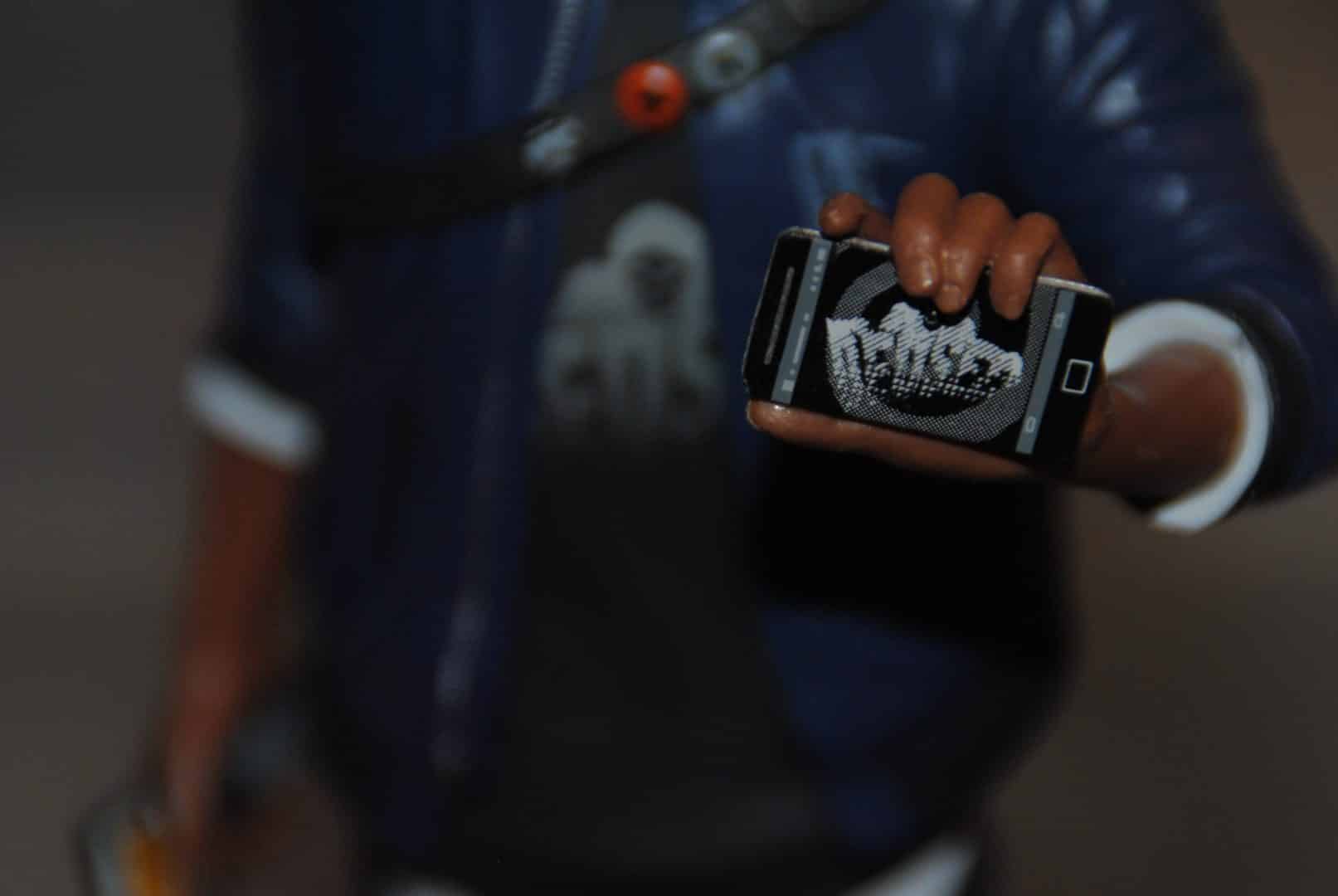 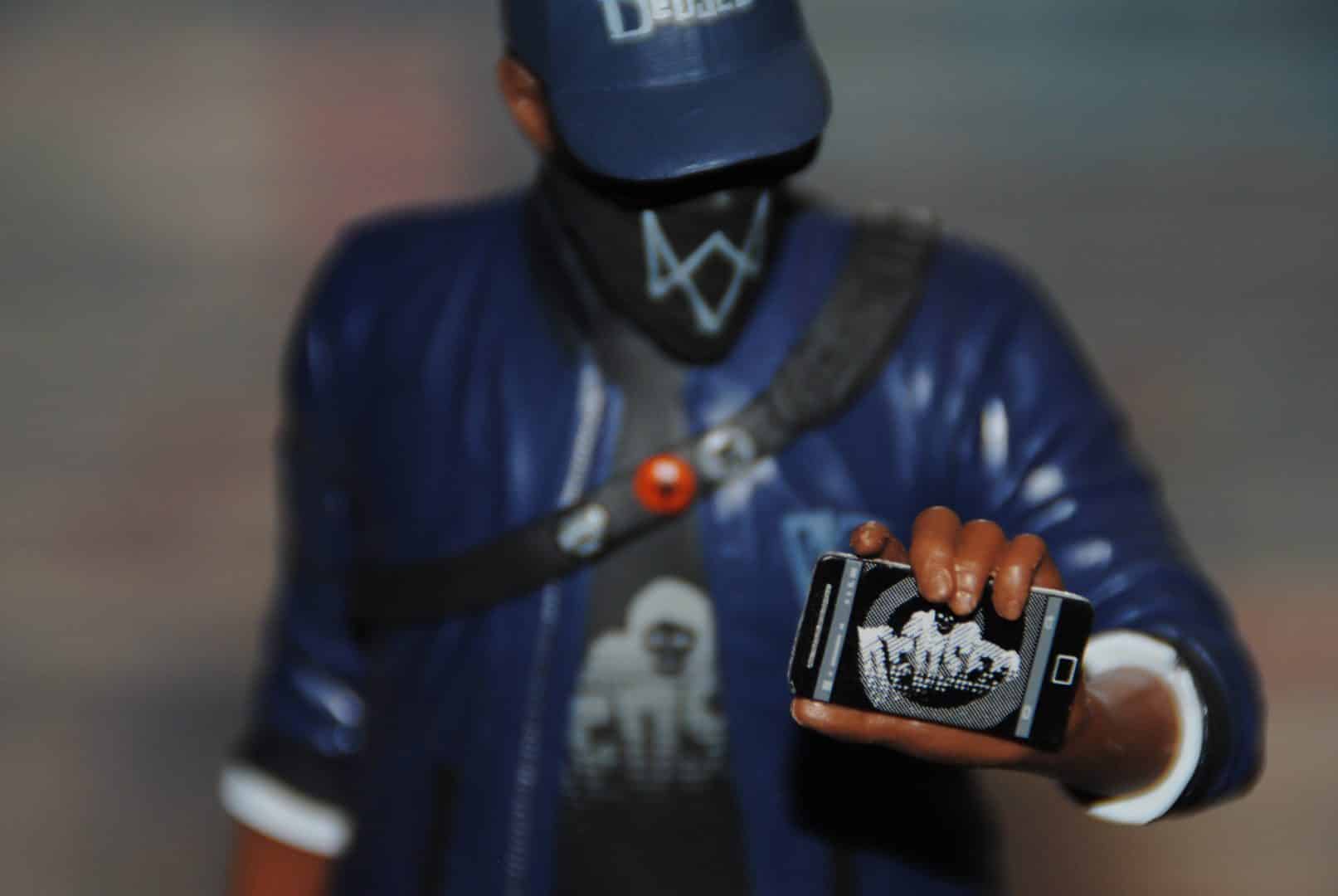 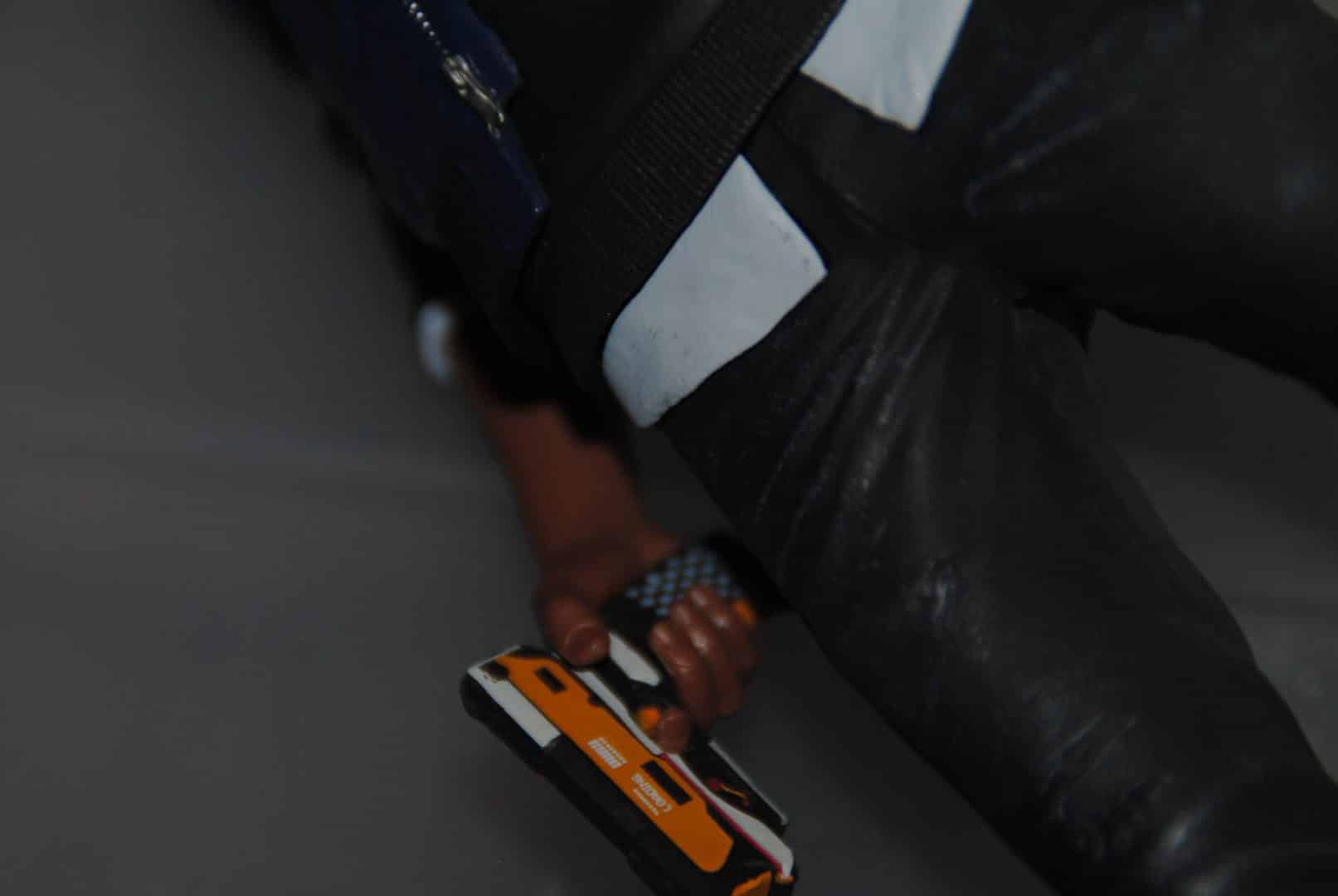 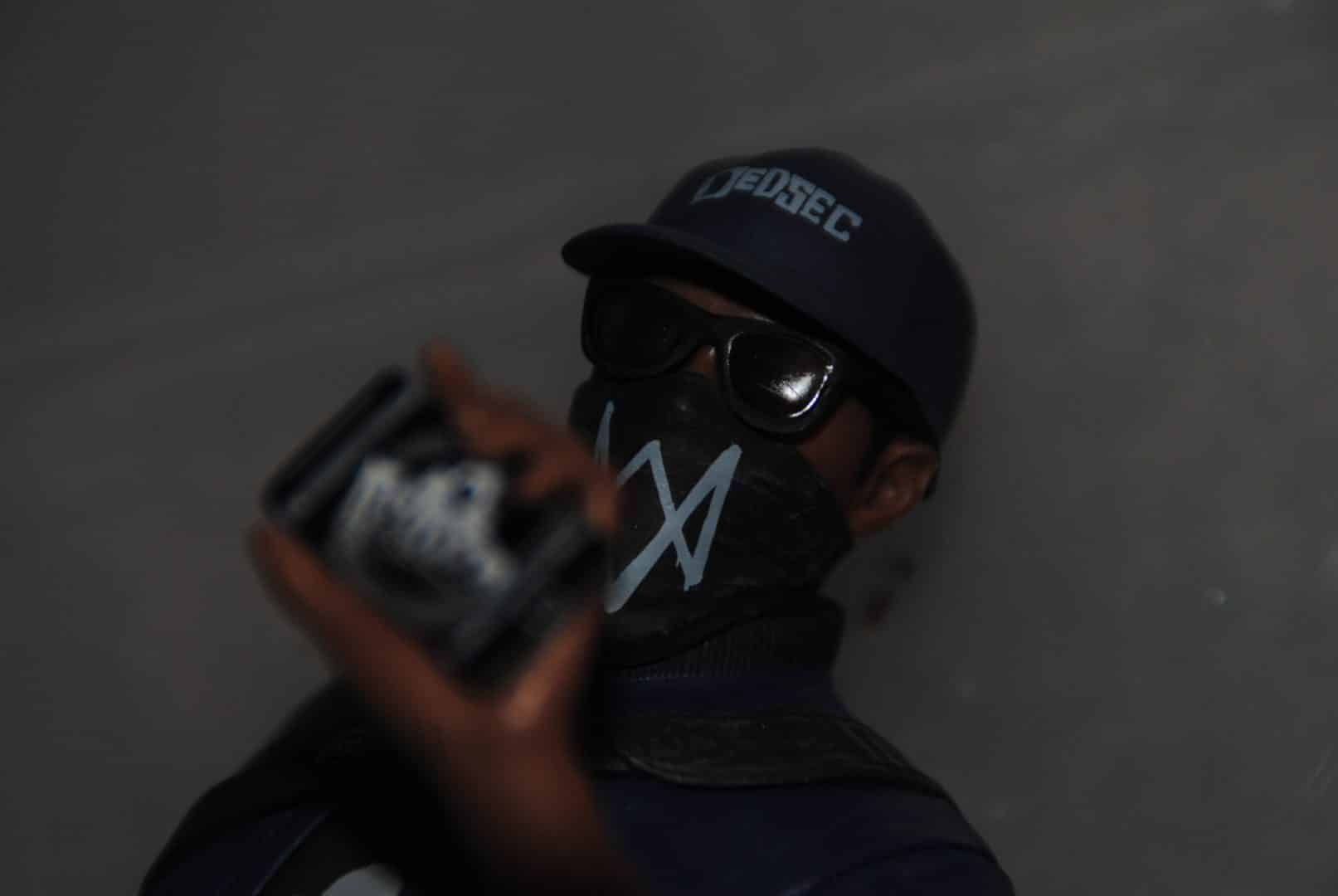 The details are here too, the gun looks great and the phone has to be one of the better ones i have seen on a figurine.

The details on the backpack, t-shirt etc just shows how much effort has been put into this thing. 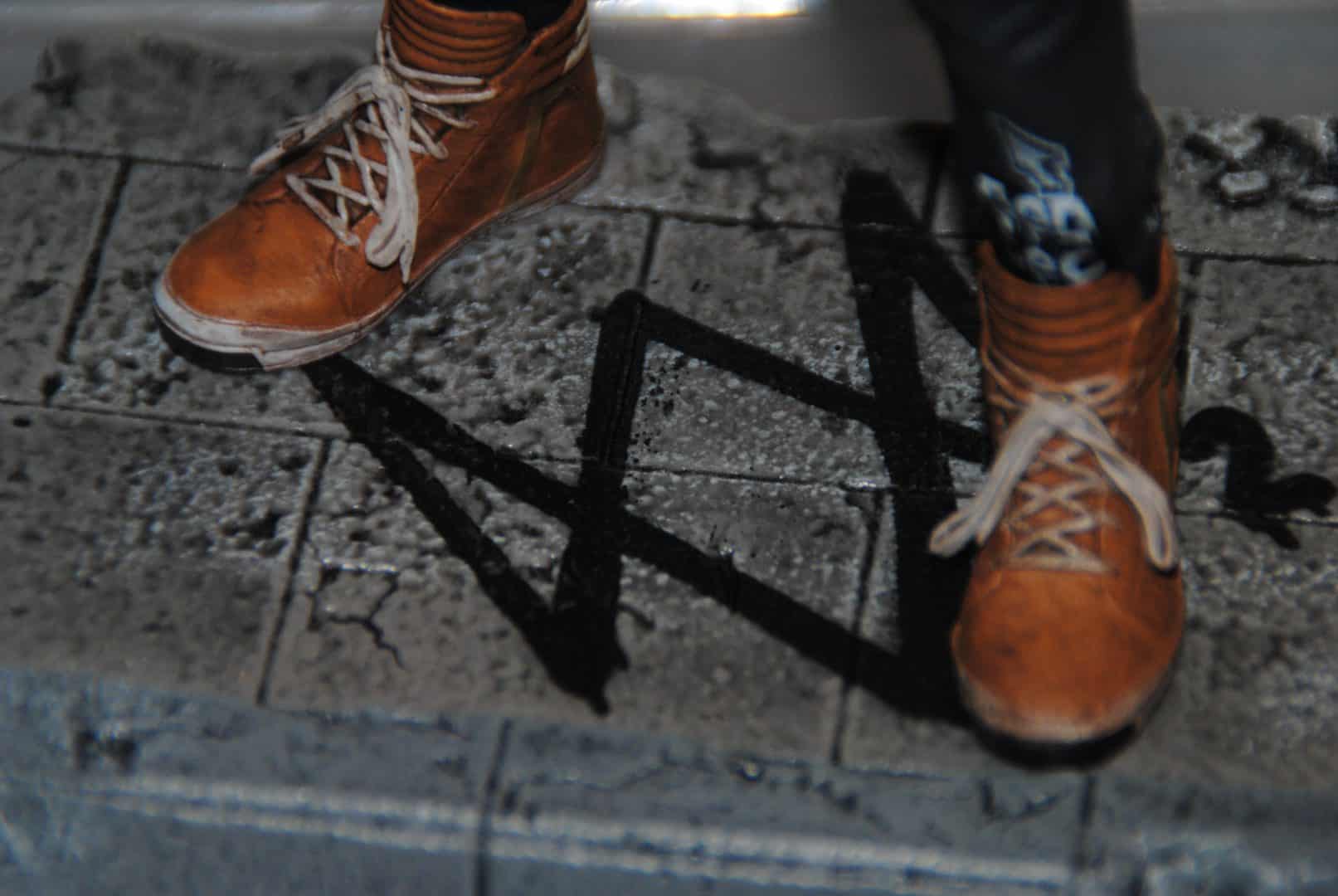 Just like the rest of the body, the shoes are also top notch and i must say that they look like the real deal, i do not know what material is used but it looks so real that it might even be spaghetti. 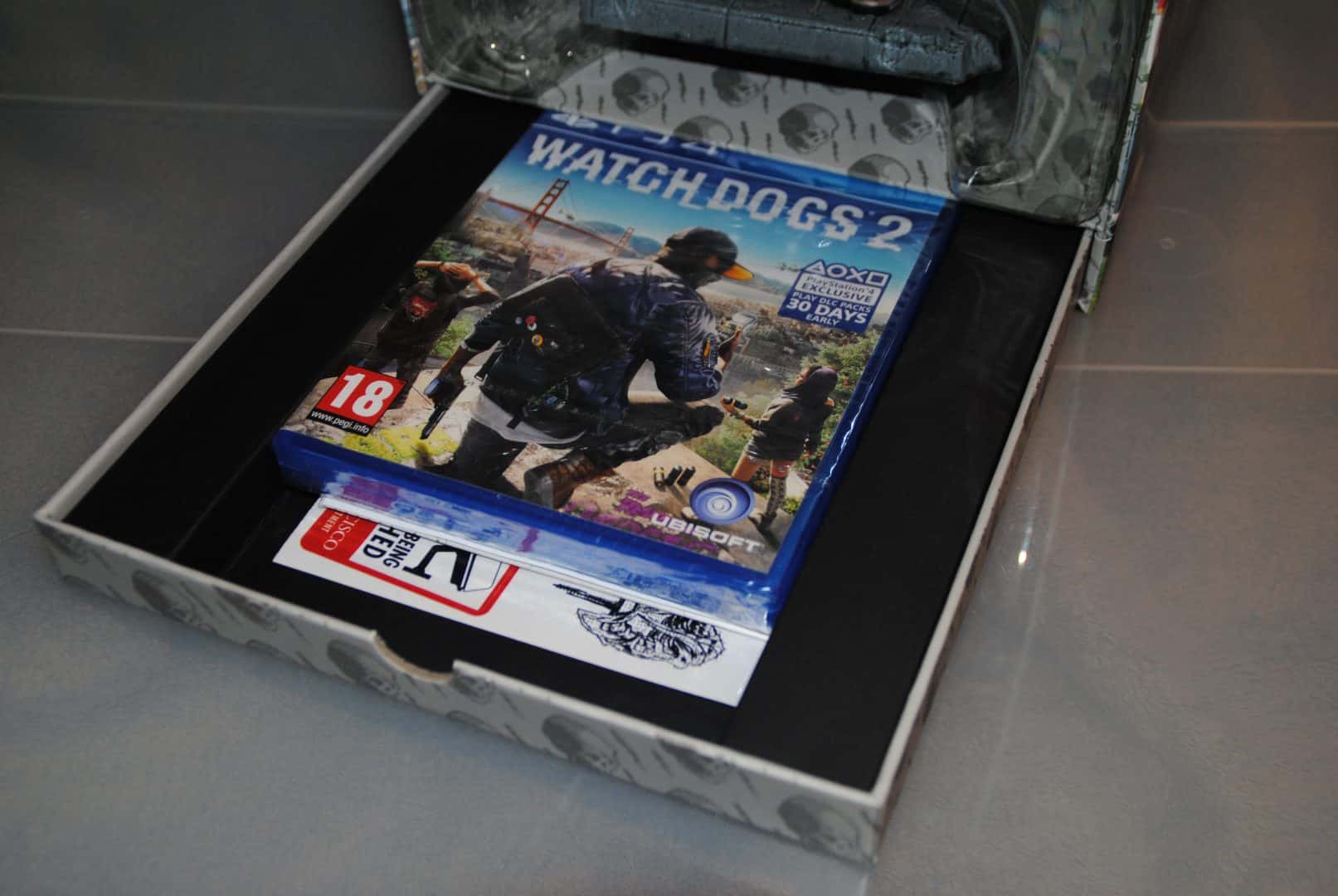 The secret drawer underneath the figurine holds the game and some other tidbits, as usual with Ubisoft games there are no steelbook to be seen, i do not know why they refuse to include them in their boxes. 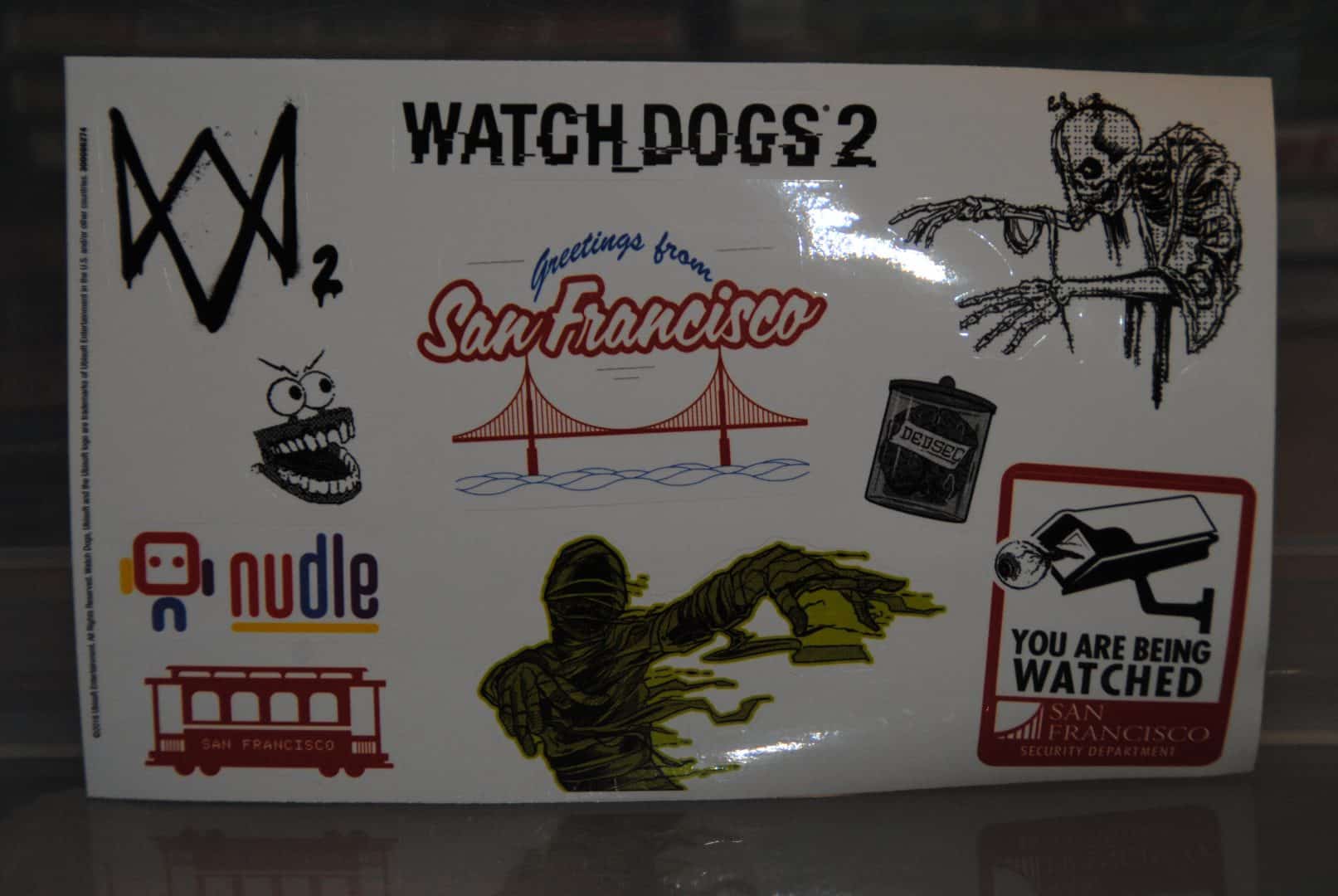 Stickers are one of the things found in the drawer, good looking ones too, are they worth it?.  I know i won’t ever use mine and that they will stay in the box for a long time.

One thing though, i have stickers inside a 30-year-old game box and i have no count on how many times i have looked at them and maybe best of all is that they keep looking better too.  (yes it is a Cinemaware Amiga game box).

So for collecting purpose, these are good. 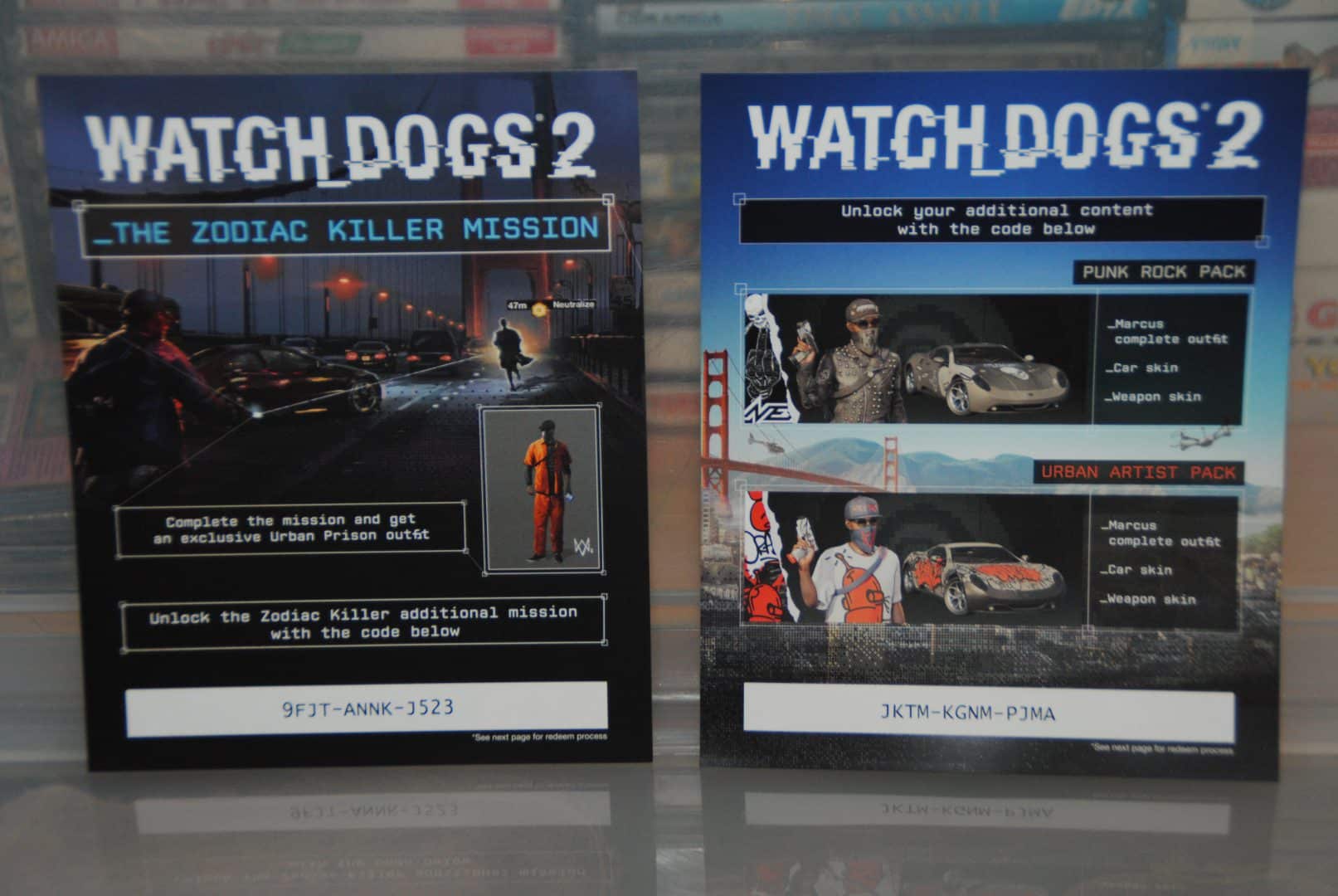 Some exclusive codes are included, no Season pass or such and as far as i know the DLC won’t stay exclusive to this box either.

As usual, the codes are up for grabs, the first man first serves – also i would like to see a thank you comment on either here or on facebook if you used the code. 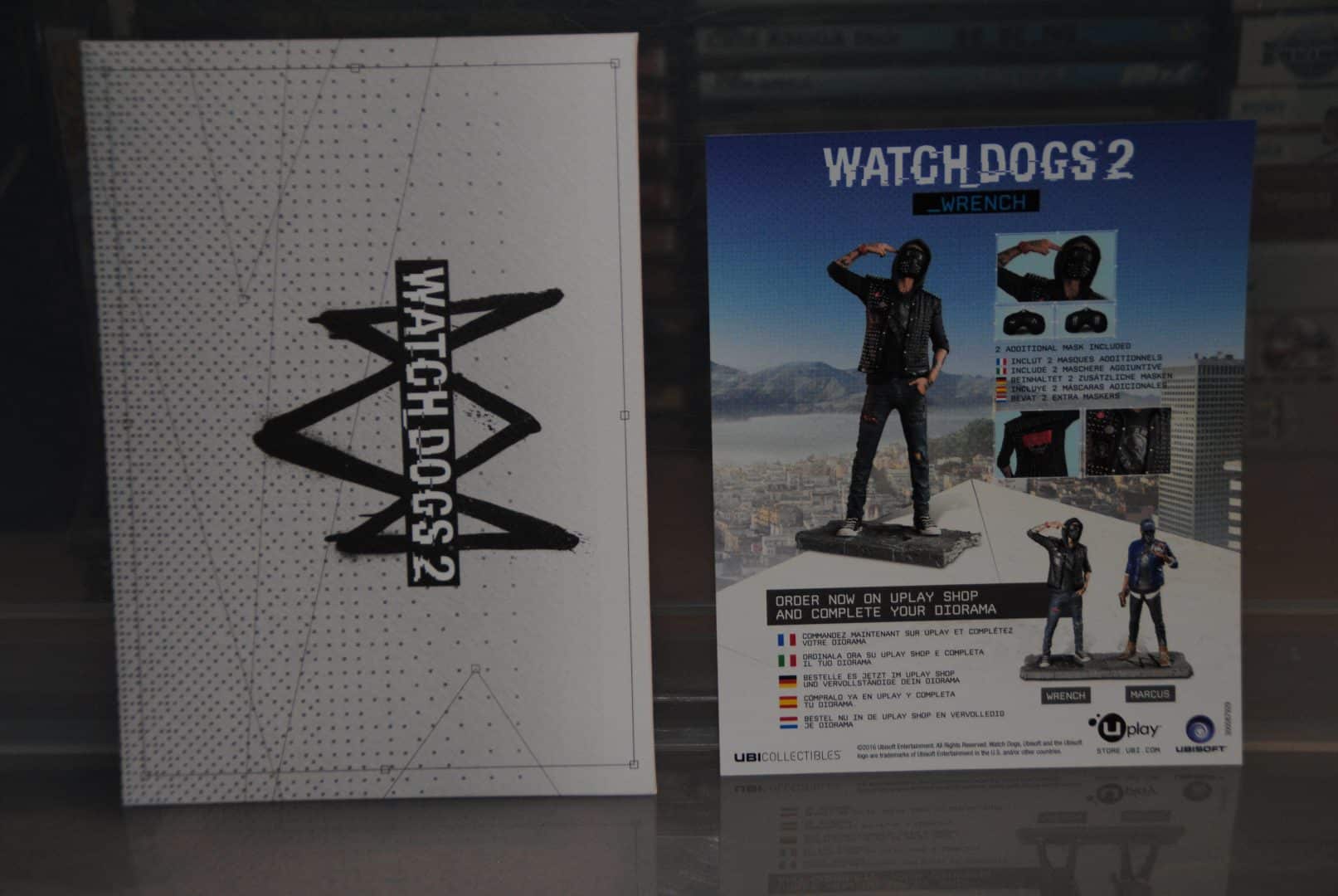 If you want to complete your figurine collection then you can order the “other one” online or whatever -a flyer is included in this box but there are no discount price or whatever. Will i order it? , no i won’t.   Will it ever be a rare collectable? , who knows, they seem to overproduce these things these days so… 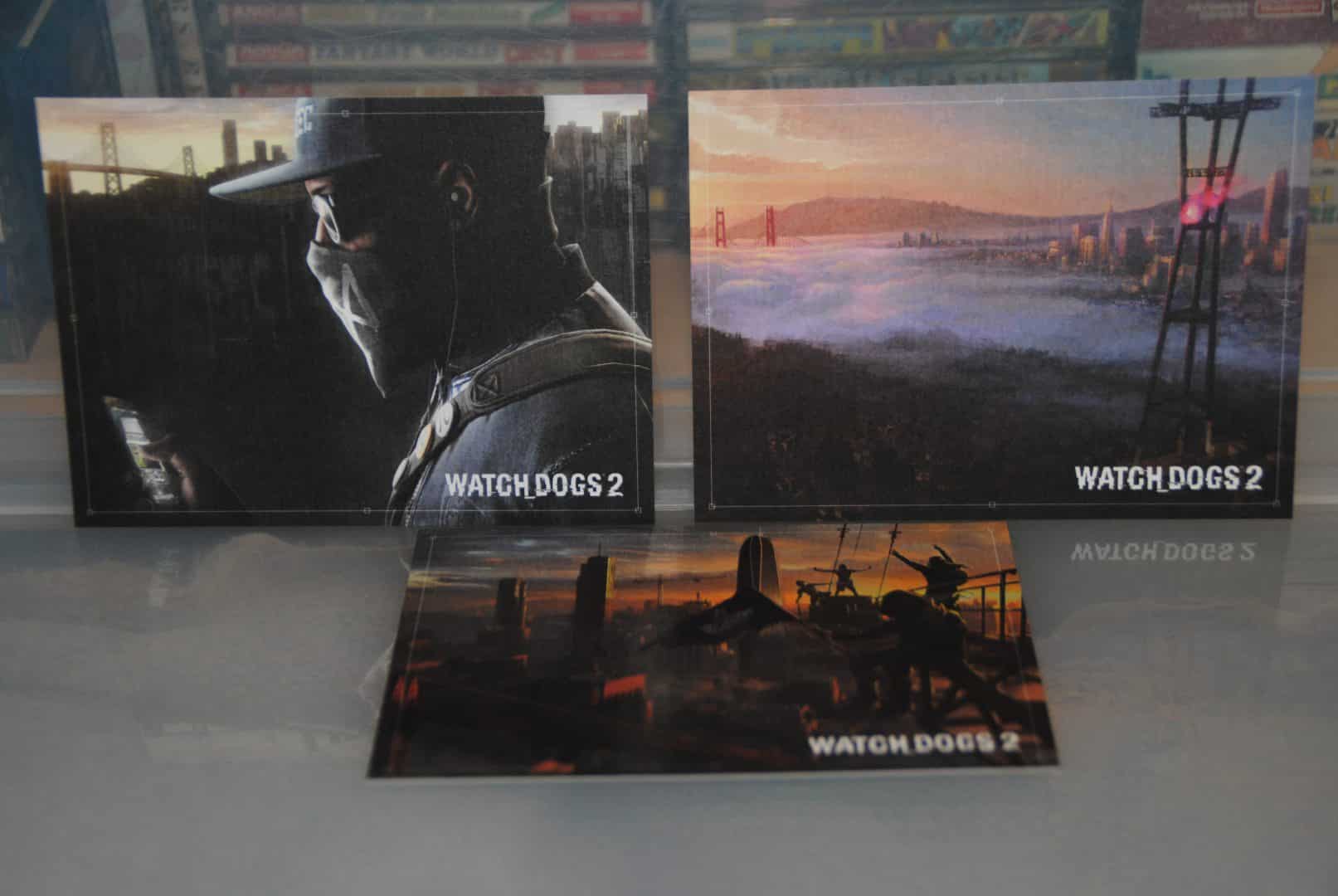 3 really good looking art cards/postcards are included in the box. 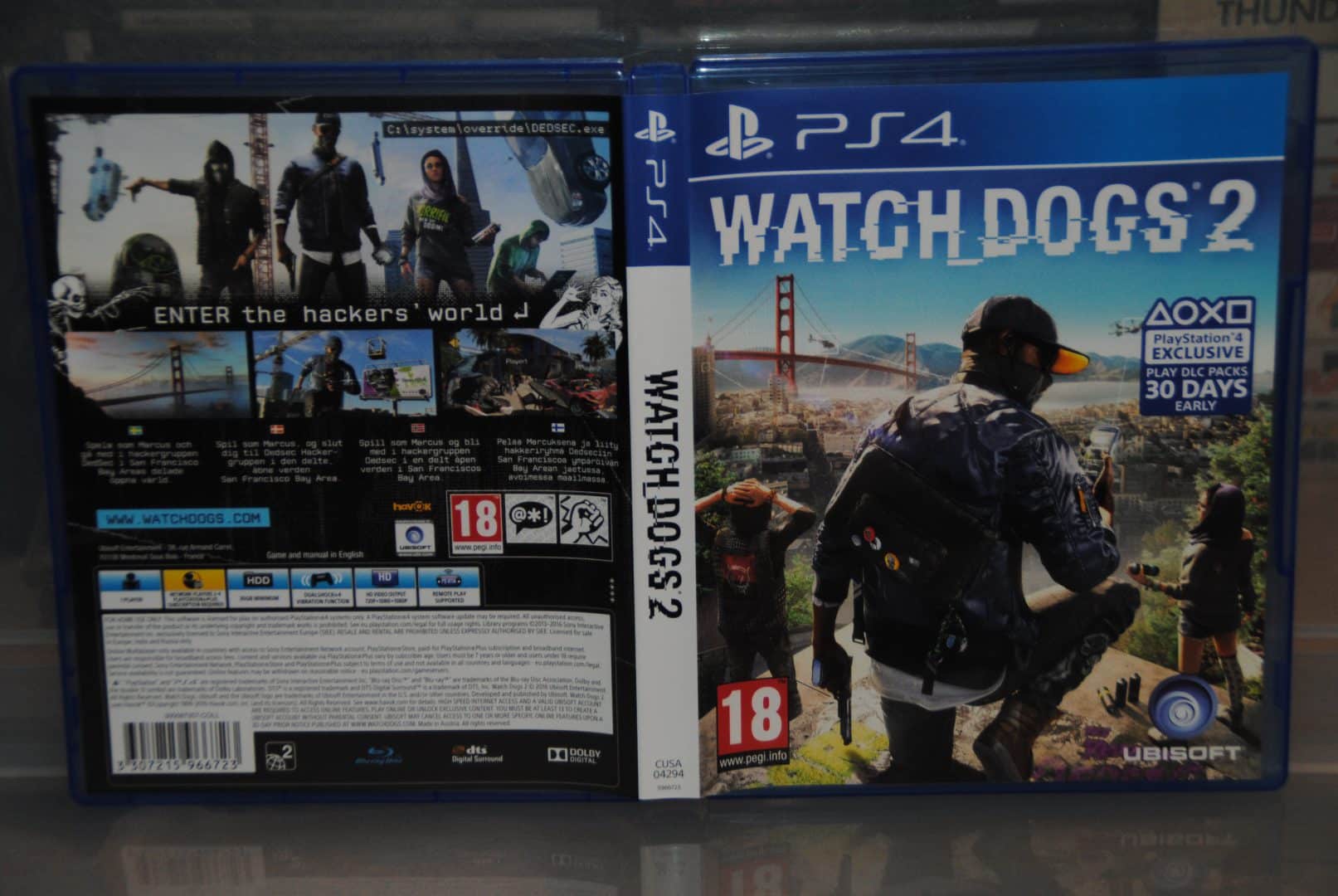 Standard Blu-ray version included, i still find it very annoying that UBISOFT refuses to include steelbook these days.

Watch Dogs (1) had a good looking steelbook though. 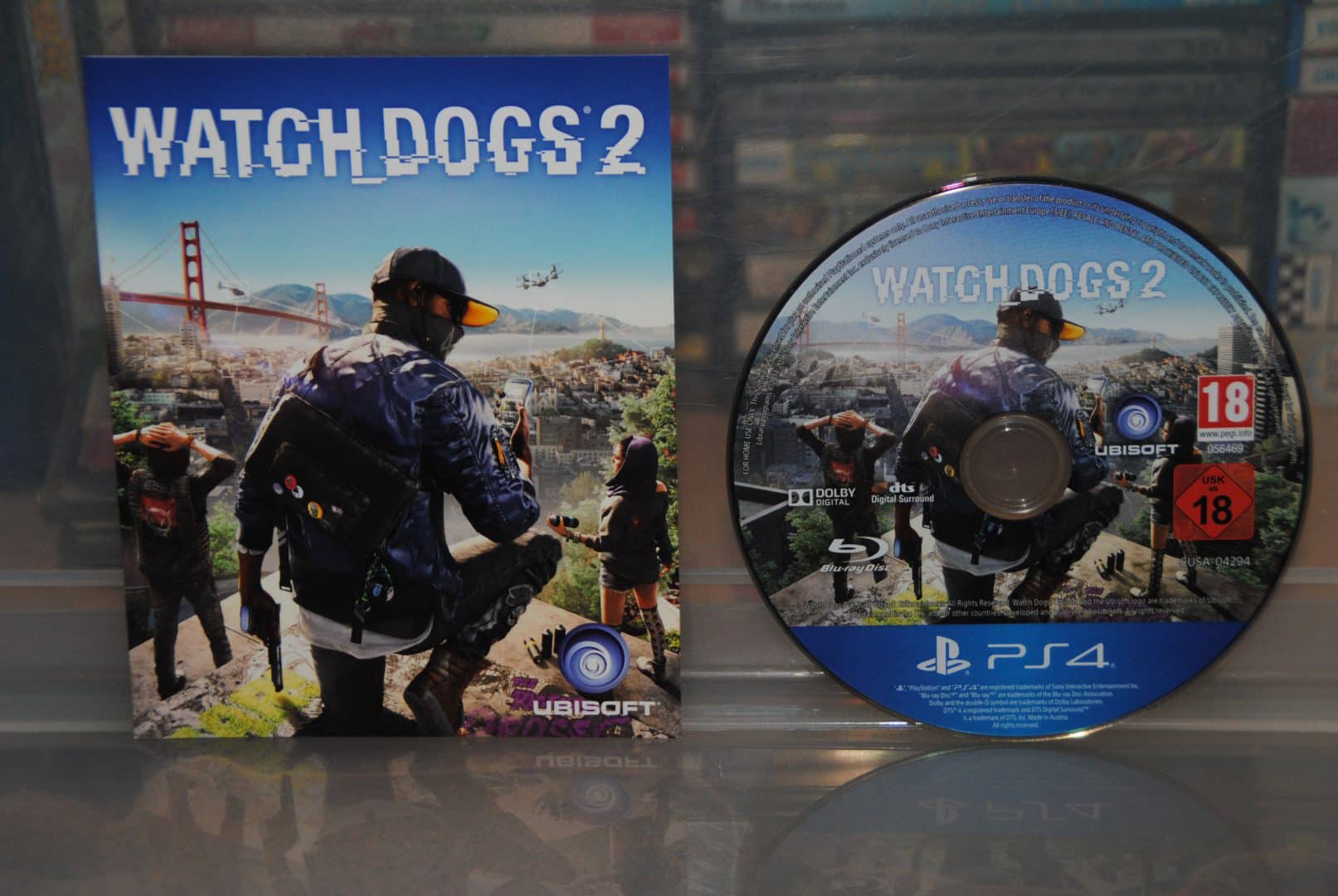 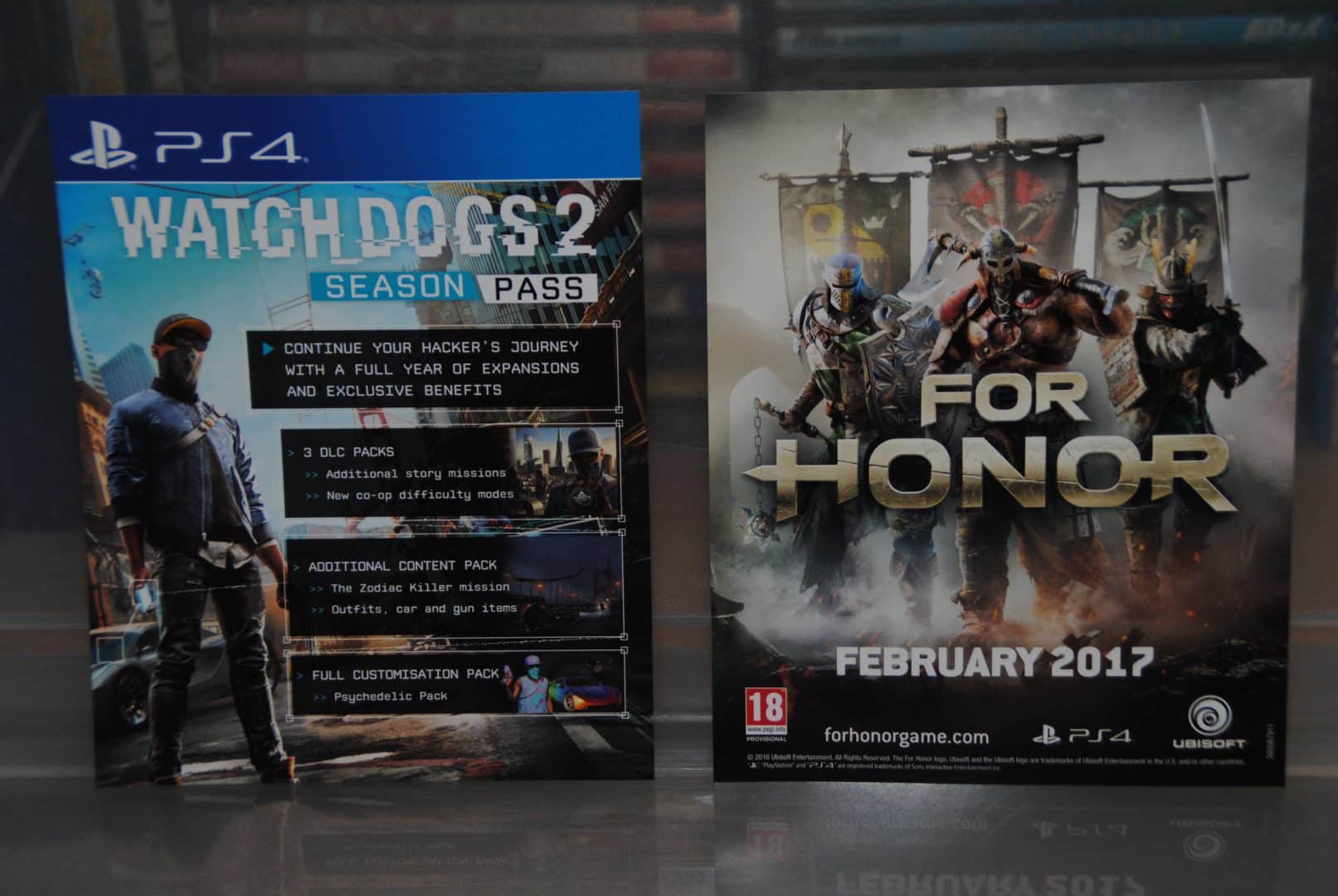 A Flyer for UBISOFT’s next game FOR HONOR, it looks good but that name is awful!

Oh, and of course, a teaser for Season pass on Watch Dogs 2… 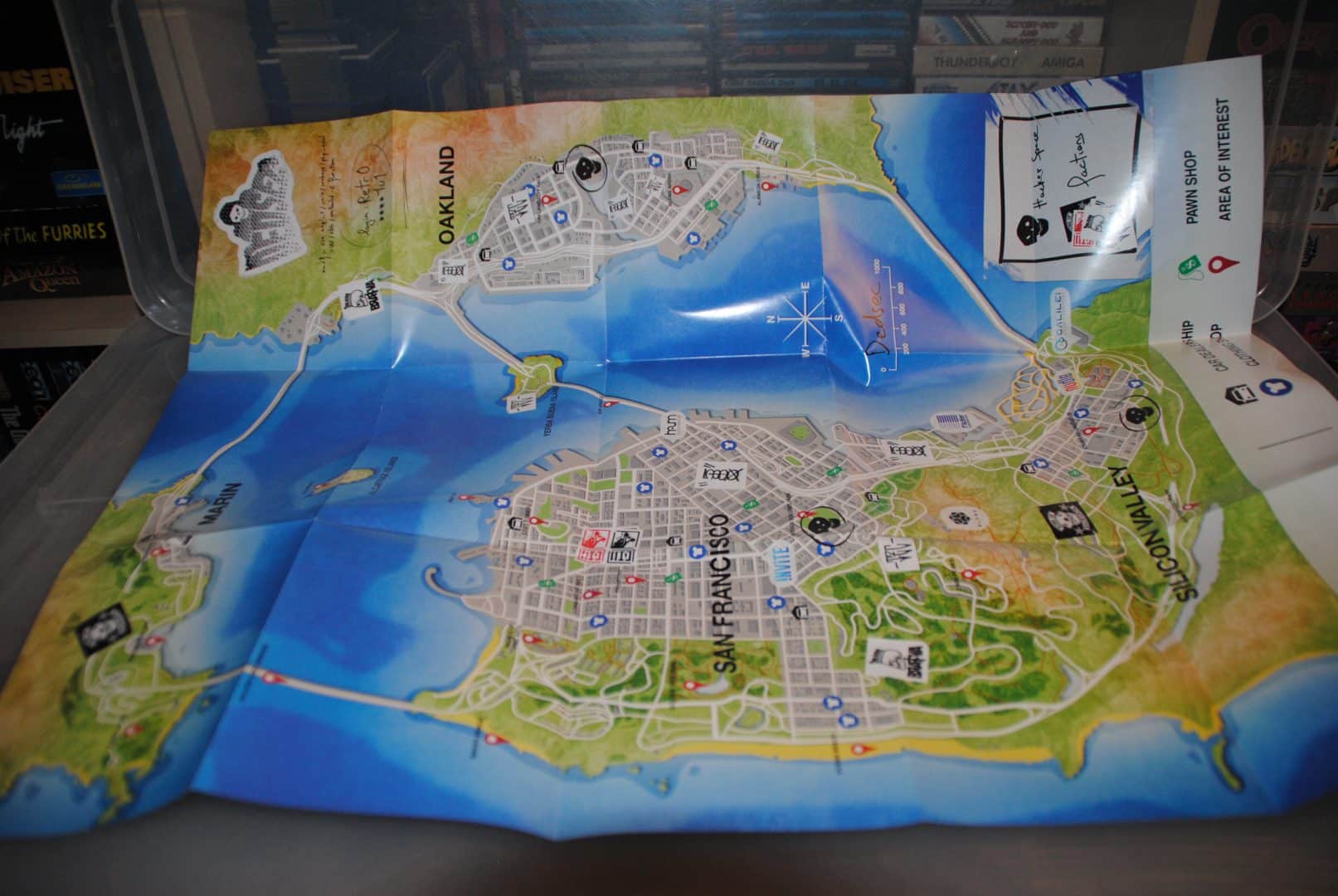 A map of SF is included too, good looking map in proper poster quality.

That said, is anyone using these things?

Maps today are inside the games and who in their right mind has maps on their wall these days?.  Walls should be covered with shelves of games of course! 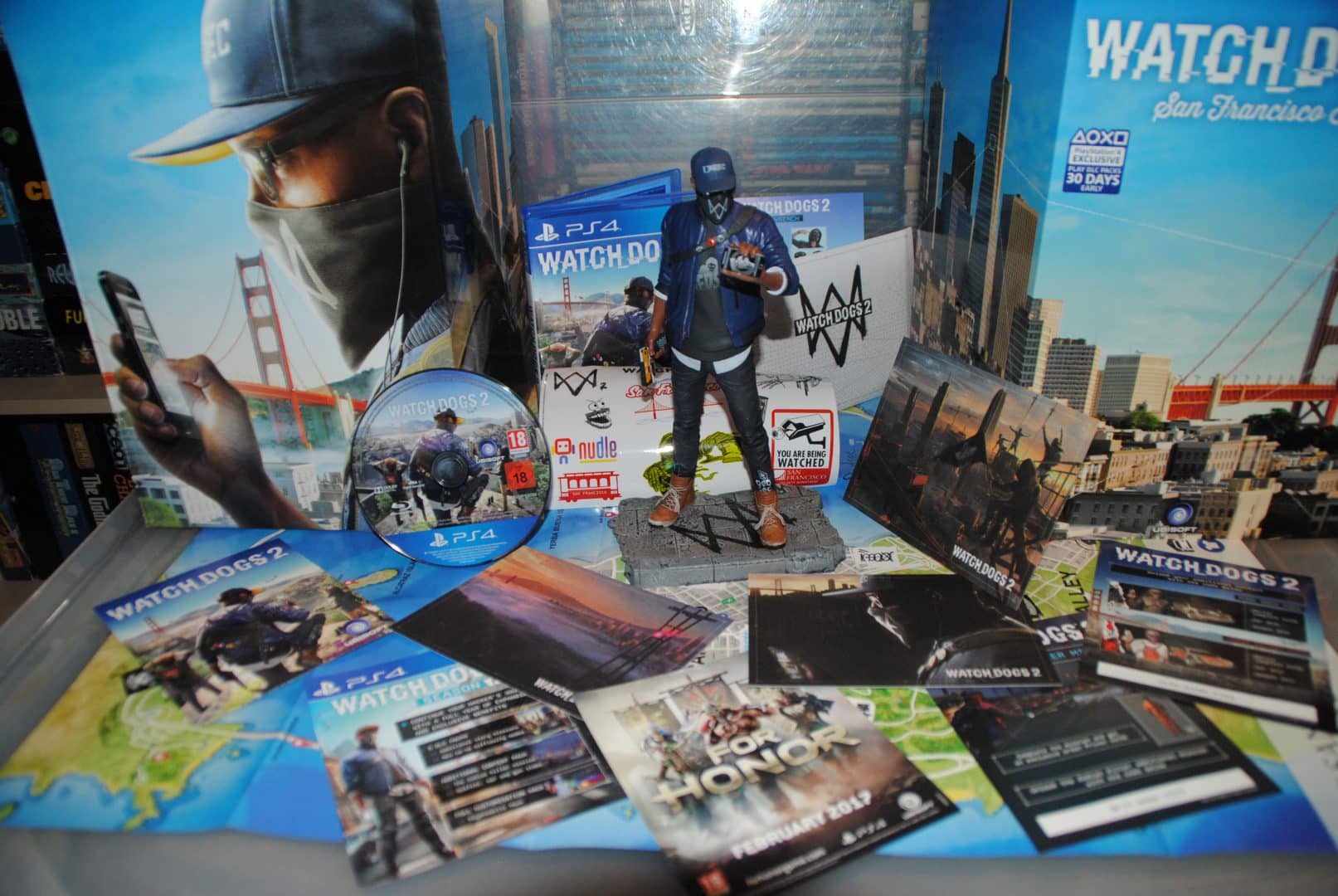 A solid collector’s item this one, a steelbook would have perfected it for sure but overall this is one heck of a nice little collectable. The figurine is the real collectable in here, them stickers and the postcards are just a bonus, but i would also have to add that the box itself is mighty fine.

I feel that Watch Dogs had the better collectors edition (the Dedsec one), but all in all, this is definitely one worthy of my precious shelf space.

Follow Us... Inspire Us To Get Better... Keep The Flame Alive
Introducing Housemarque’s Nex Machina The Wait is Over! – An Introduction to FF15 / FFXV 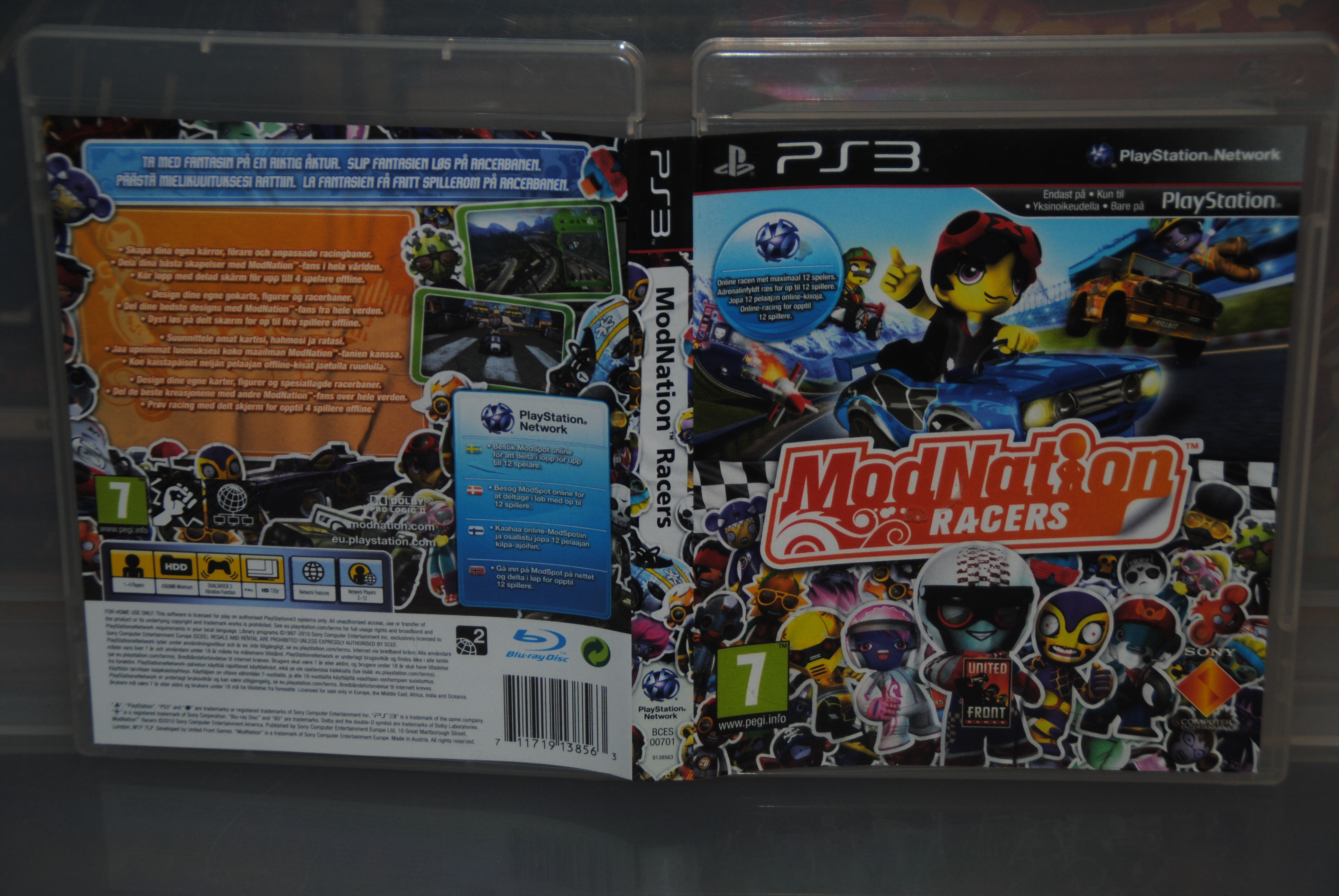