Do you remember Ikari Warriors, Commando, Warzone, Leatherneck or even the brilliant Dogs Of War? Well, if you liked any of those and want more of the same then you might want to check out Watchtower from CyberArts.

Watchtower came out in 1996 for AGA machines, a CD32 version was planned (and is mentioned in the manual) but cancelled due to the dwindling market and that they had no extra features planned which sort of led to very little reason for releasing it.

Back in the day when the game came out, there was very little hype as most had already seen the new 3D styled wargames (Loaded / ReLoaded/ Apocalypse/Contra SS etc) for the PlayStation and so on which meant that most magazines and review sites more or less just downplayed Watchtower instead of looking at what it does brilliantly instead of wanting it to be more like the PlayStation games of the same era.

Yes Watchtower is indeed a simple game and yes it ain’t a technical marvel either but the things it did was done in a way that made the player(s) really enjoy it and maybe most of all it was a huge game with several difficulty levels, huge boss fights and loads of weapons and a brilliant 2 player co-op mode.

The game kicks off with a pretty ok intro, a catchy war theme and some typical macho text story, the pictures are rendered and the quality is good except for the game logo which is horrible to say it nicely.

The level screen shows a map of our beloved earth, the missions are located around the world and yes it is the typical stuff… Jungle, Desert and Snow and so on…

As negative as I may sound now – I love the presentation and quality but it is just missing that little extra that would make it scream a proper AGA Amiga title of the same era as Capital Punishment, OnEscapee and so on.

The graphics in Watchtower can be a bit odd as it mixes two typical styles from the mid-90s, the wonderful 2D pixel graphics style and the not so good low 3D polygon raytraced objects whereas the latter was used mainly for boss fights and other tidbits in the game.

Why the developer used raytraced graphics is somewhat puzzling as it somewhat breaks the way the game looks in the total picture but for some odd reason, it still feels ok at the same time.

Another odd feature is that the missions are time-based which means that you might be able to reach the boss within the time limit but won’t be able to kill it because time runs out.

What about the good stuff then?

Well, the game shines when it comes to playability and the fun factor, it is always fun to find a new weapon, shooting crates to find some shiny new money is also a big motivation factor and you will have to share stuff while playing in two player mode as this game ain’t generous when it comes to pick-ups.

Another neat feature is the ranking system while playing you will level up based upon how you play in terms of efficiency and kills etc.

The graphics and sound are clear as the purest water in Norway, a very good colour scheme and everything got a certain fresh feel to it because everything is so tidy.

The levels are huge and scroll in all directions, enemies can shoot you off-screen but some backtracking and moving around making the game less annoying to play. 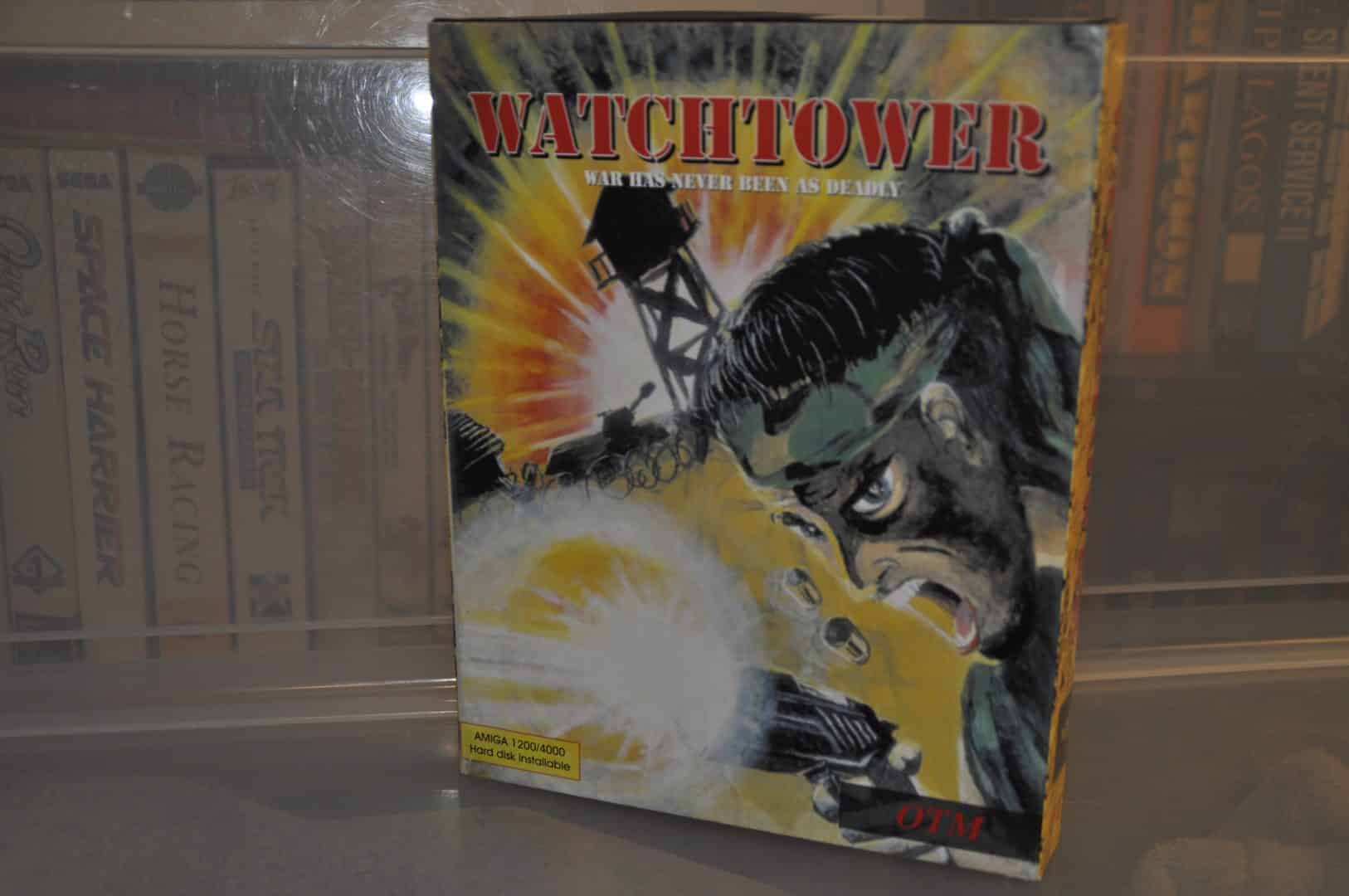 The game comes in a huge box which has a rather odd colour scheme, Yellow, Red and Green but the art style of the box is downright brilliant with its 70s style mixed with late 80s design, for those interested in the details, the box picture was done by Joni Stolt. 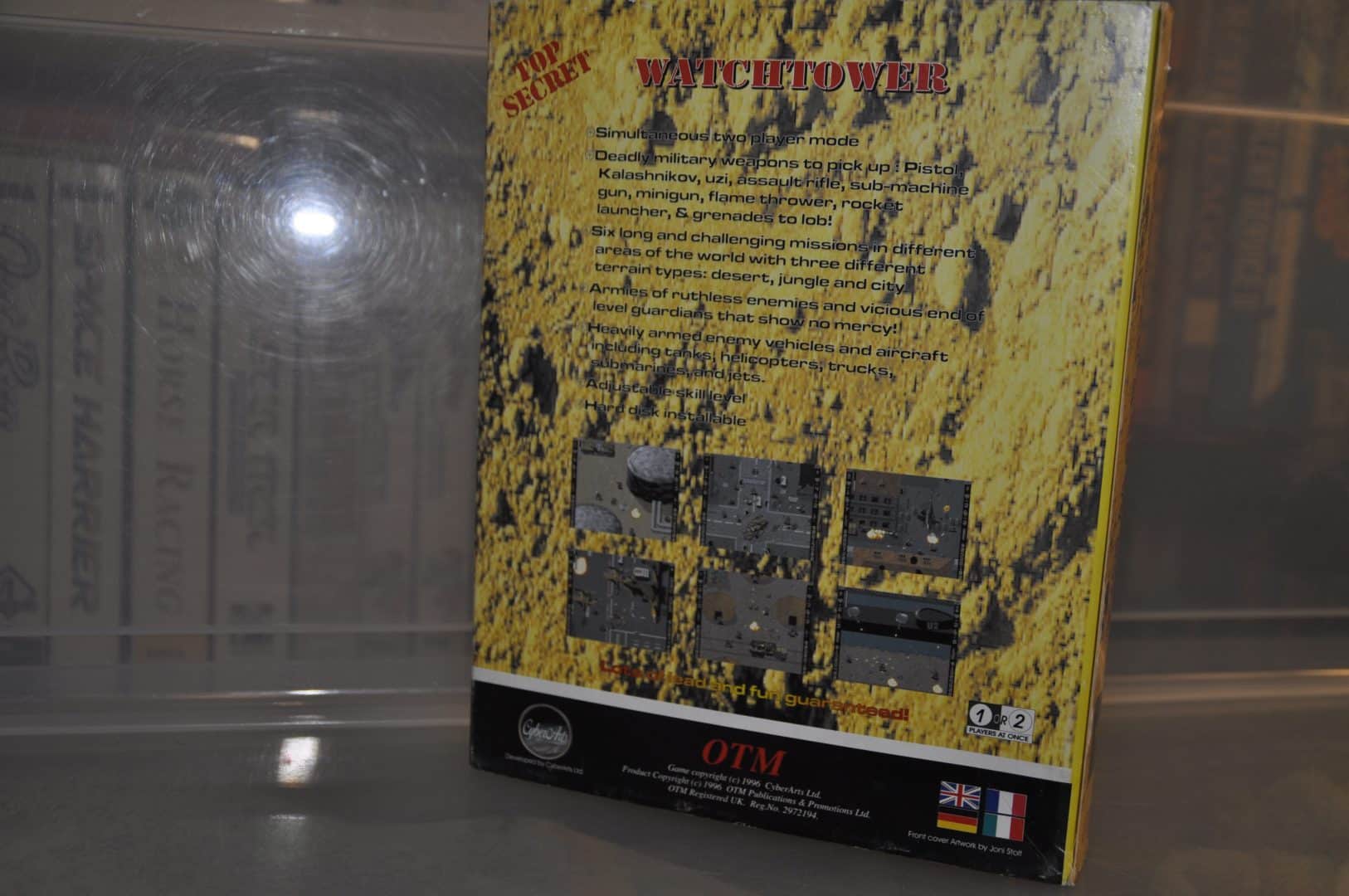 The backside though is downright horrible, the yellow background destroys the look and makes the screenshots and text very hard to read and look at.

The manual looks identical to the big box print on the outside but the inside is multilanguage and with almost 80 pages worth of text and pictures. 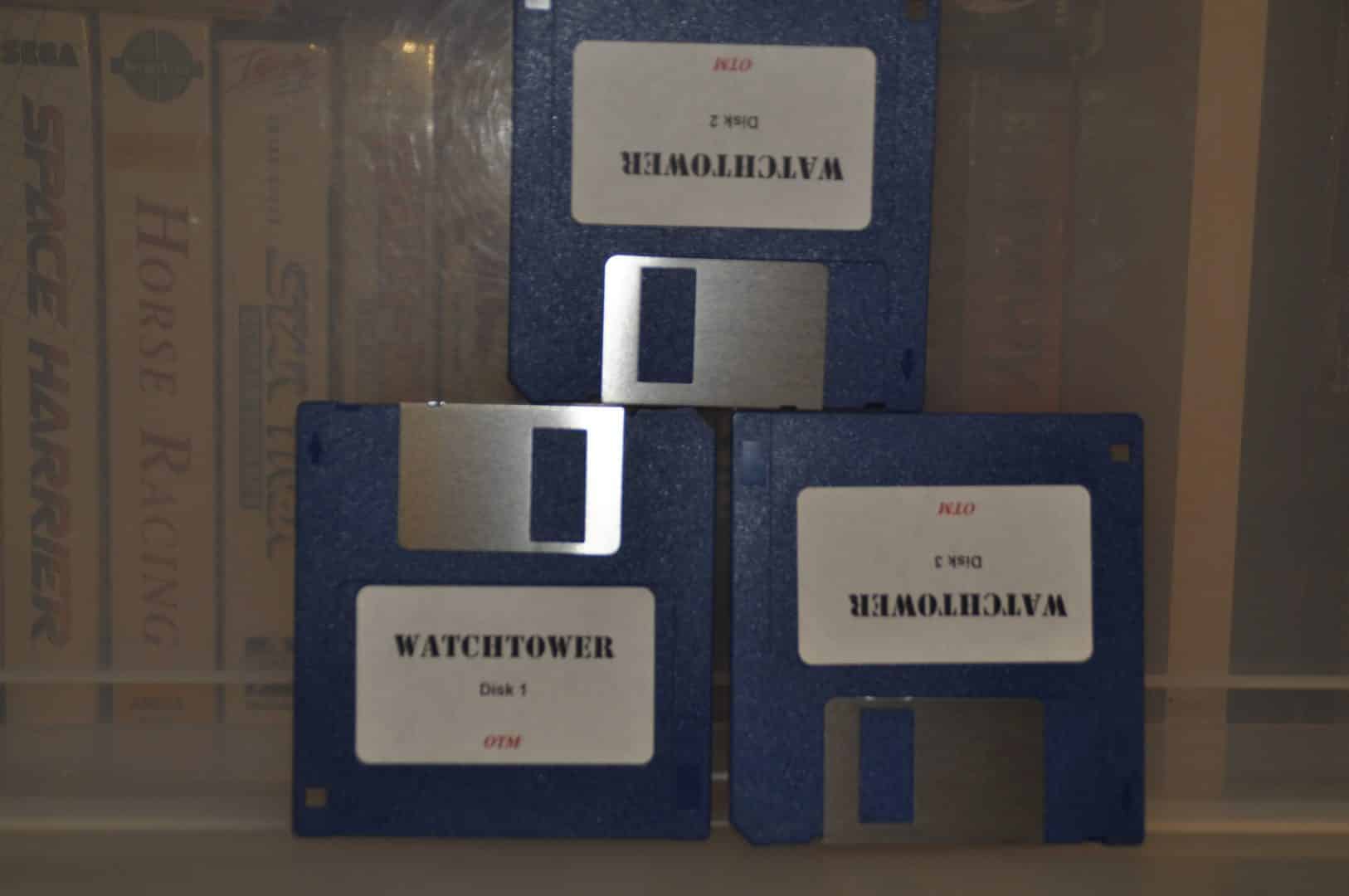 The game came on 3 floppy disks with a very simplistic label print. 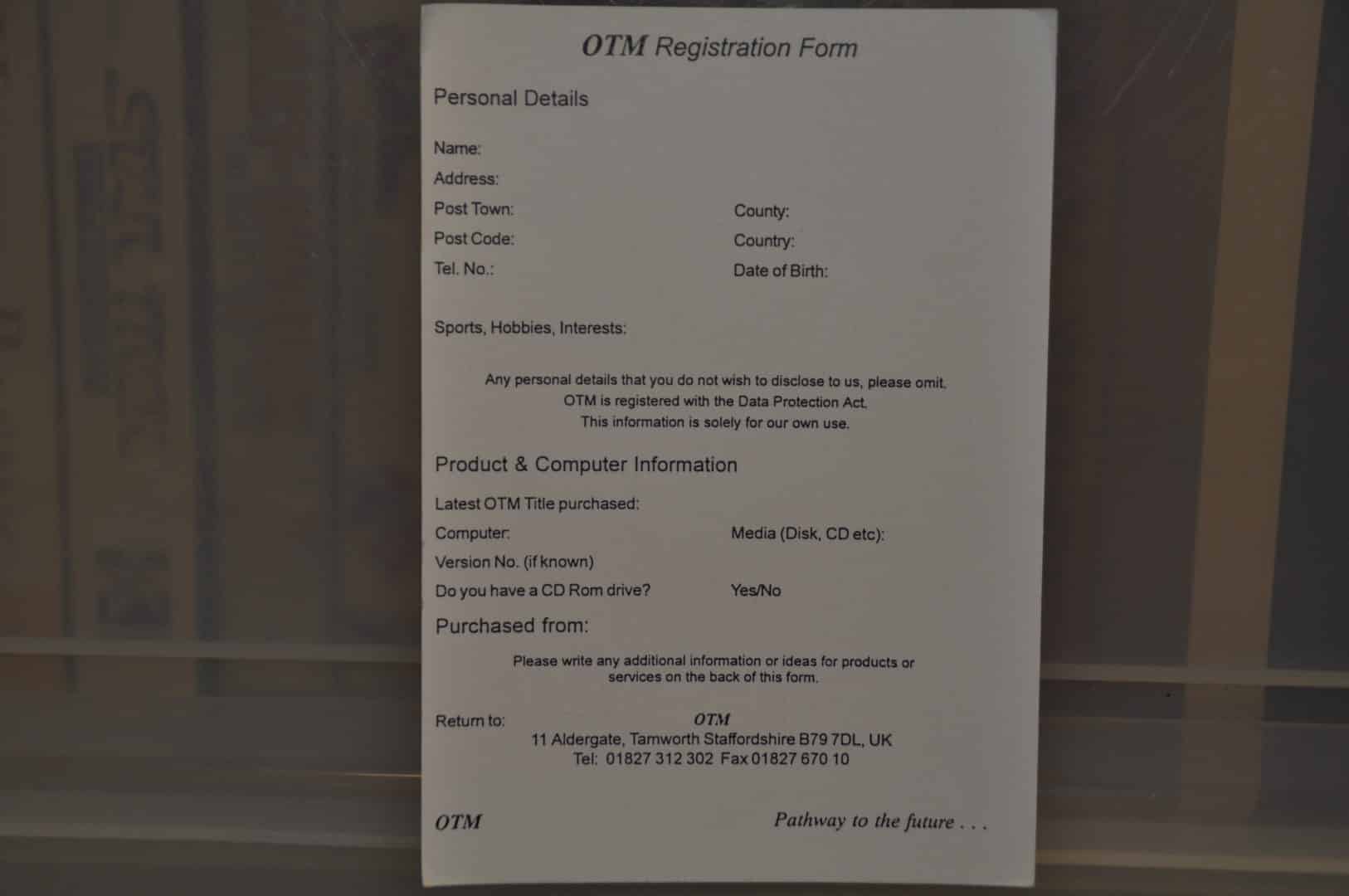 Registration card, i always feel guilty for not sending these things in… 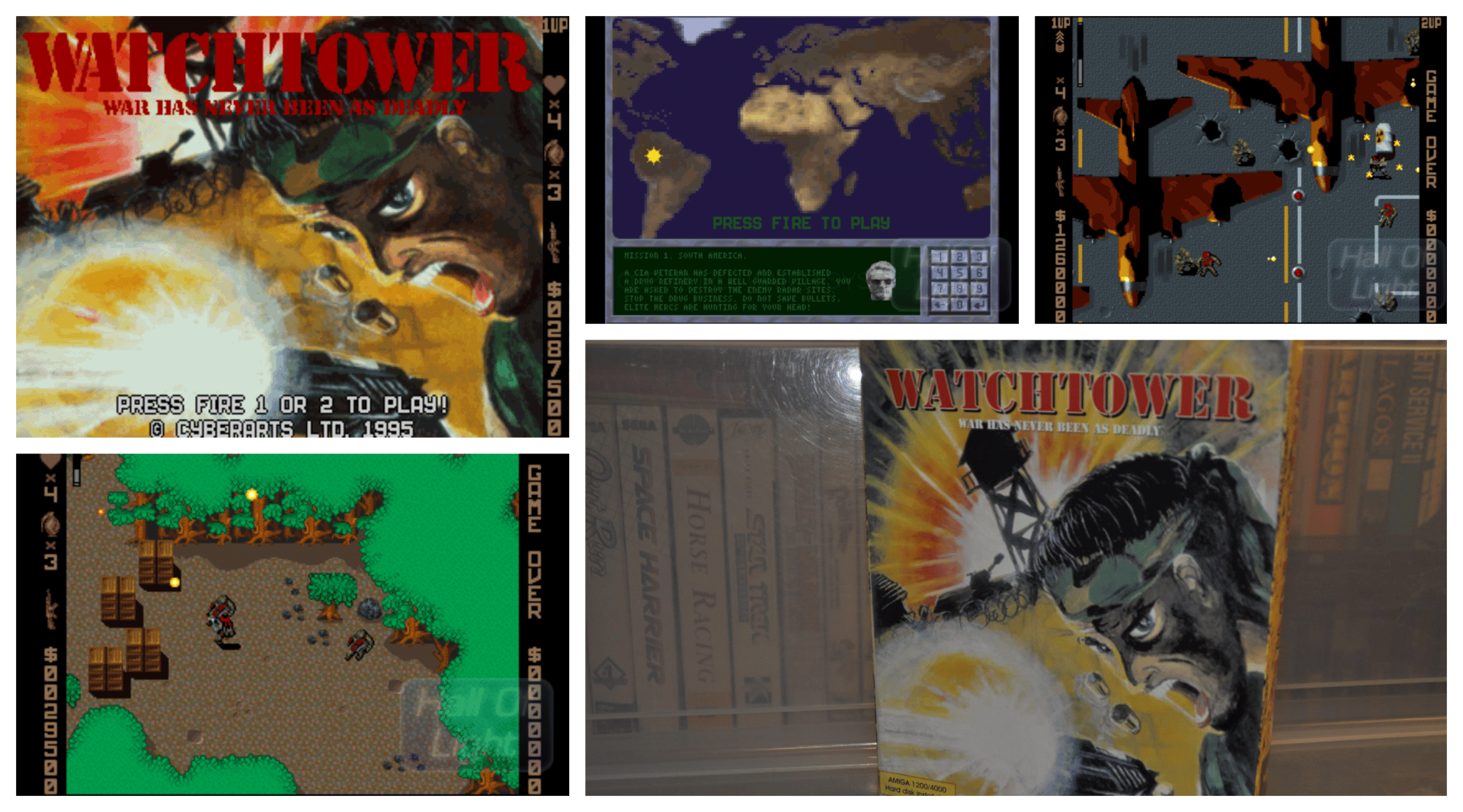 Watchtower may not have been the amazing game the Amiga needed in 1996 but it was a solid effort and a fun game to play. Amiga gamers expected more than they got here and somewhat forgot about the game pretty quickly but hopefully, this article will trigger some of our readers into giving it a second chance, I can certainly recommend it as one of the better couch multiplayer war games out there.

I also have to mention that there is an unofficial CD32 version out there which doesn’t require a keyboard, it works great and worth your time if you want to play it on the CD32 too.

Screenshots are taken from Hall Of Light and Game box pictures are from my own personal collection.

3 thoughts on “A Look At Watchtower – More Dogs Of War?”