One has to wonder, Titus put out 3 different series using the same engine and every one of them was way below average at best. Yes, the 3 series was indeed, Crazy Cars, Fire And Forget and Offshore Warrior. How the hell did they manage to survive?

I have always had a weakness for driving games and sometimes i find even the crappy ones enjoyable. The first Crazy Cars game was and has always been one of the games that i never did like and to be honest i hated it so much that i never tried it for more than 1 minute or 3 tops.  That had to change this week, i have spent a bit more time on it now, yuck!. 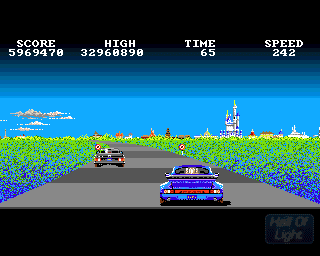 Second car you get to use ingame, never tried it. Crazy Cars 1 Amiga. 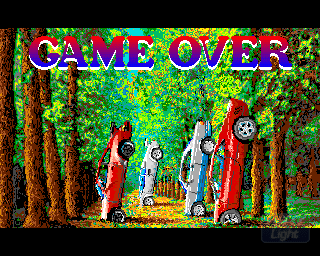 Best thing about the game, the Game over screen. Crazy Cars 1 Amiga.

It was one of the first driving games on the Amiga and it did have an amazing opening sound + picture combo as well as a special game over screen that is seen above. But all these things together did not make up for that the game was a complete mess.

I have no idea what to say about the game really except for that it is a mess, you start with the most boring car in the game, an Mercedes, yes a Crazy choice…

The game handles like a boat, you will crash in every turn and when you do, the car jump and then grind to a halt, nice!…

That said, there is a sense of speed in it and it is smooth too. 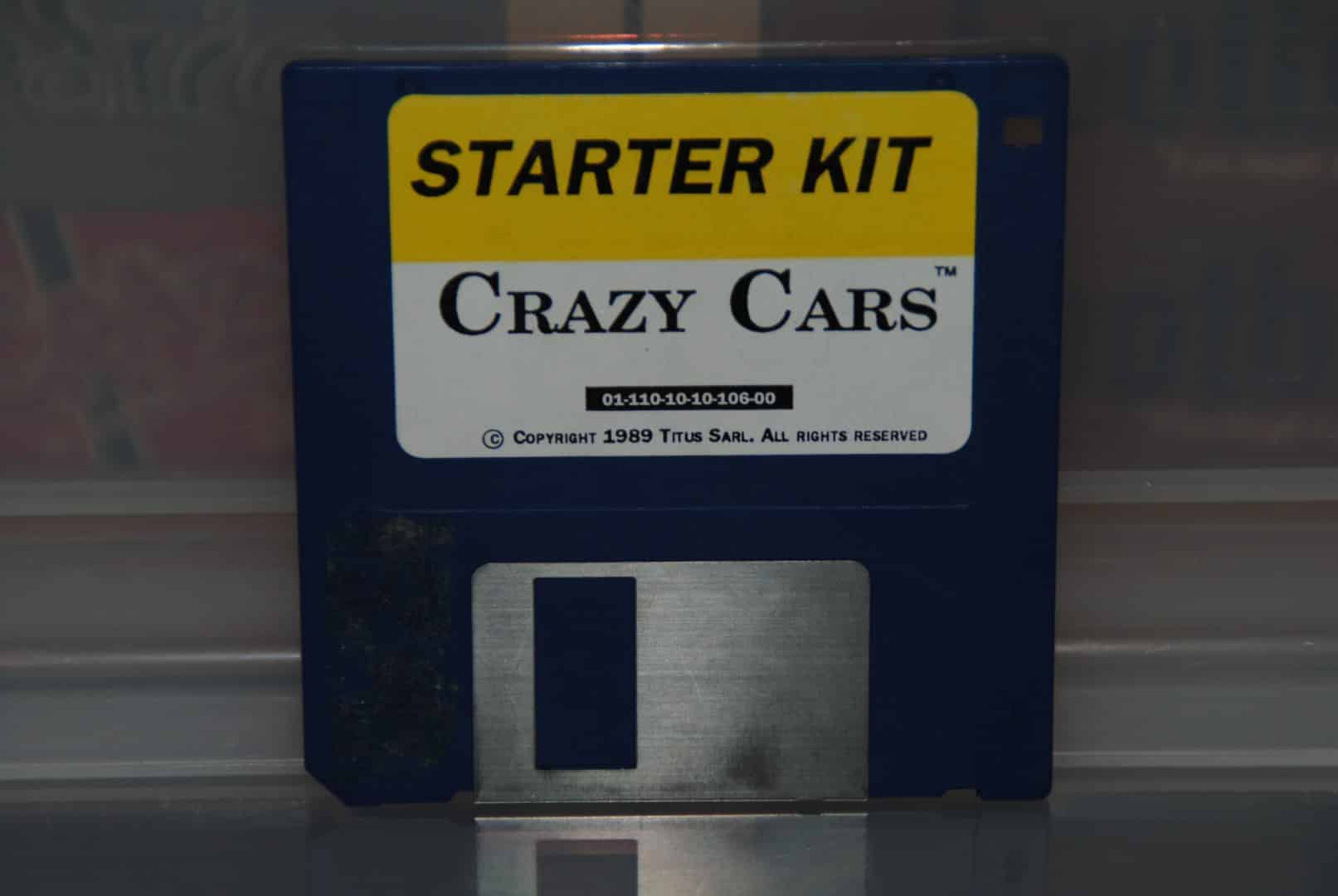 I never did get this game in a legal way really, i pirated it on C64 and Amiga and i am not ashamed of that at all, the floppy pictured above was a gift from a friend when he left the Amiga back in the early 90s.

Crazy Cars was and still is rubbish, 2 nice samples in it (Intro and Game Over screens) albeit in mono only and there is that game over screen which is pretty cool.

How Titus went on and made a sequel for this game must be seen as an achievement.

Ok, next game up is Crazy Cars II,

In good Titus tradition, the first thing you get is a very nicely done opening picture and sound sample. A good step up from all the other Titus games before it, things looked sweet.

There are a few things about Crazy Cars II that not many know about. It was a very ambitious project and while it did fail in many things it certainly did not fail in the concept, this concept is today known as the open world or sandbox.

Yes, i kid you not, the game is actually a very limited open world racer. 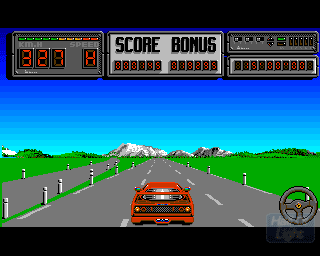 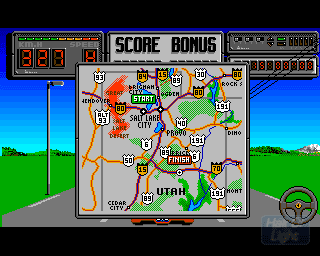 Sadly, this is where the whole game goes from sweet to a disaster.

Once you figure out that there is a map screen, well that is when you realize that this is not a regular driving game at all, certainly not for its time anyway.

The first game controlled like a boat, this sequel controls like nothing at all, well maybe it is the closest thing to a dog there is, seriously, this game is UNPLAYABLE!.

So here you have an advanced engine which looks great (in screenshots) and a system which force you to drive to various junctions (and change lanes/directions) etc but it controls like a dog, WTH?

The graphics may look good in the shots, sadly this is wrong as it is far from smooth and it feels so slow that it hurts!.  The excessive use of borders and such certainly doesn’t help either, it looks like a bug but it is just their choice of screen resolution. 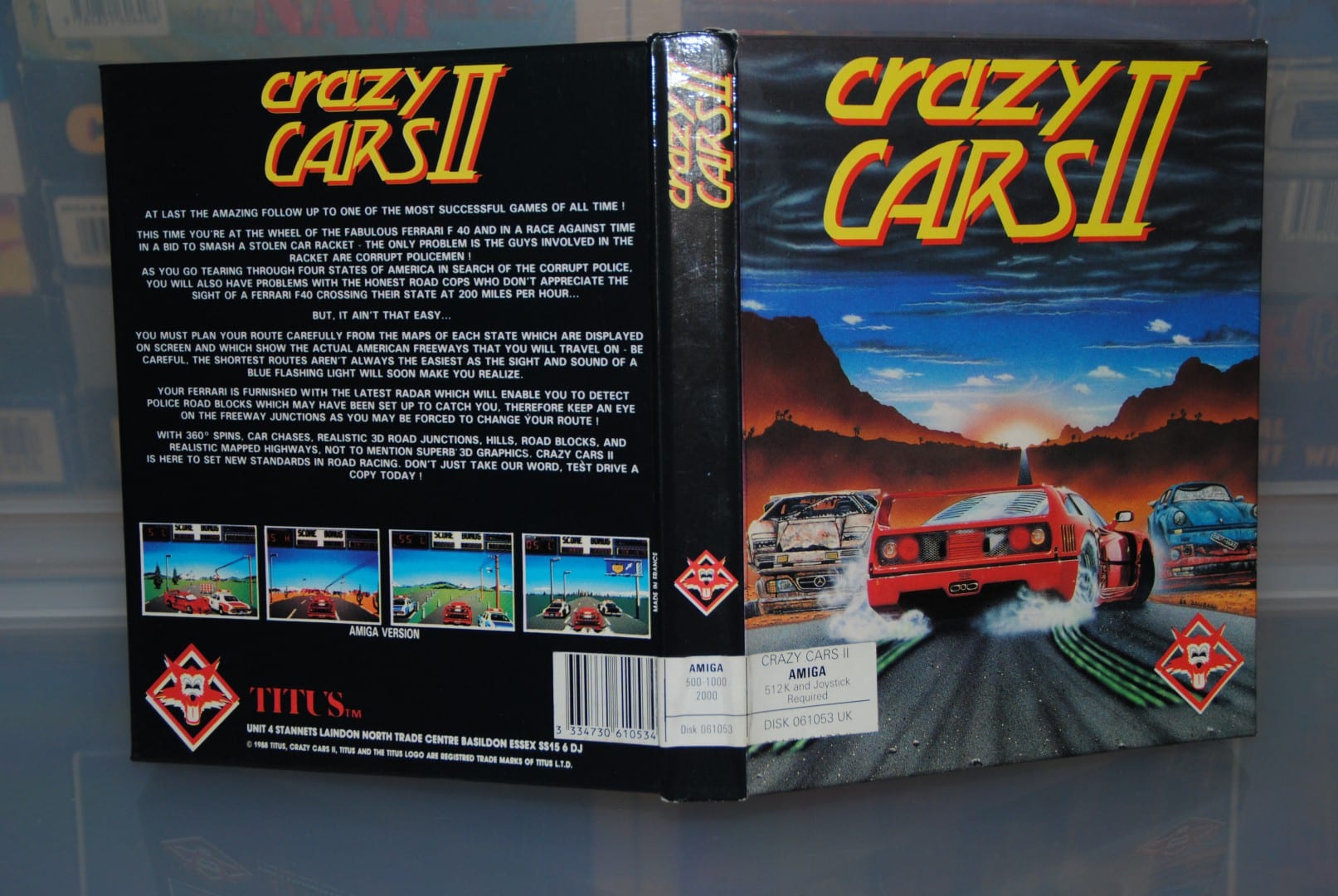 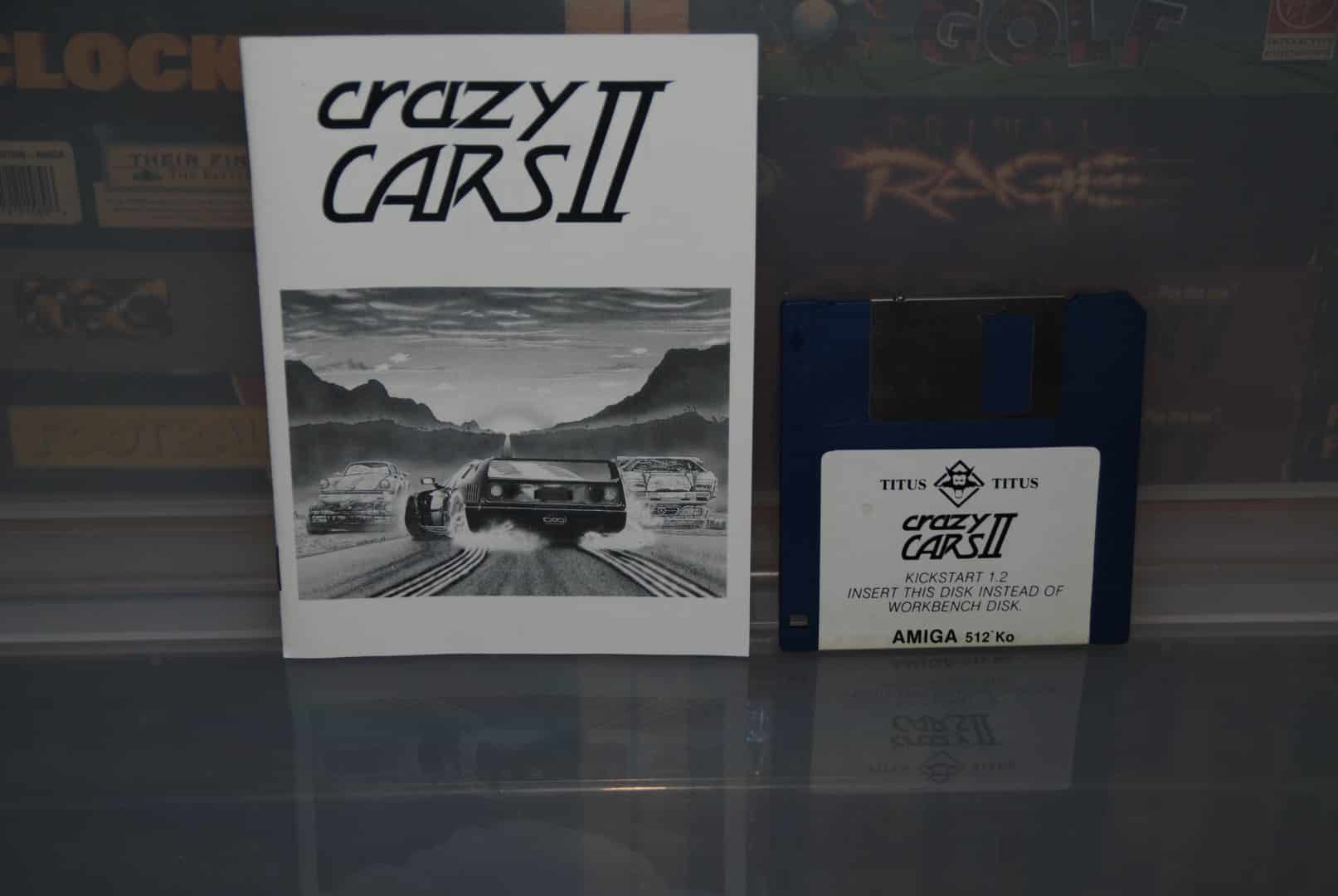 On the audio side, well let’s just say, what audio?.  exactly, there is none except for a Police siren sound (ARGH!) and the explosion sound when your car blows up, which it does every 4th second btw. 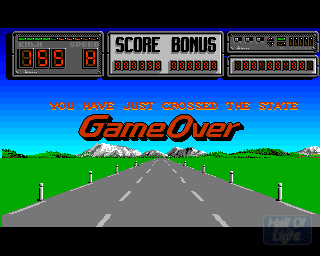 The “game over screen” from the first game rocked and was one of the best features of the game, the screen in the sequel is the total opposite, Titus, with?………

At this point one was certain that there would never be the third game, right?…  wrong!. 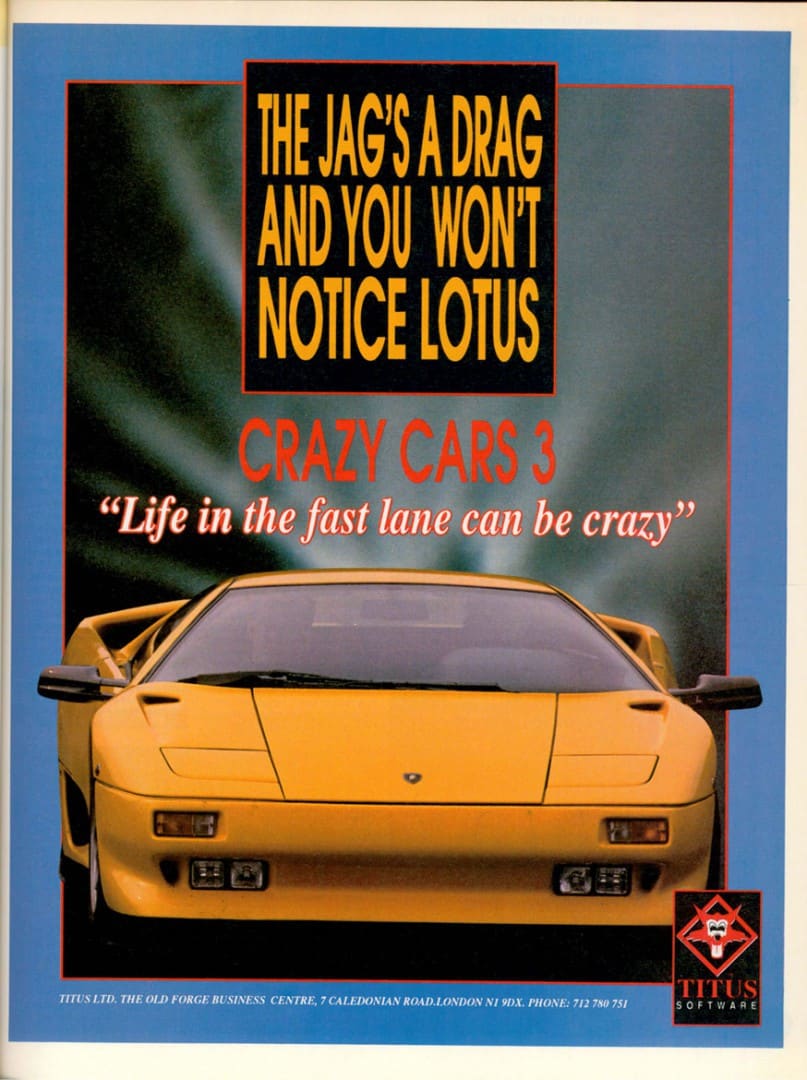 Crazy Cars III was released in 1992 and i wasn’t expecting much but i had to get it as it was a driving game and well, this poster/picture above made me quite hyped, putting out such an advertisement is enough alone to buy the game even if the game is crap.

Titus and Crazy Cars III mock the Lotus franchise and Core’s Jaguar XJ220 in 1 poster, epic! simply epic!. I am sure this kind of advertisement is far from legal in many countries and i am also pretty certain that this kind of promotion would end pretty badly in today’s market.

Crazy Cars III took all of the things it learned from the first 2 games and scrapped it, as bad as that might sound it was all for the best.  This is the game that was supposed to have been Crazy Cars (1) for sure.

So, was that advertisement and the hype around the game true? is this game as good as that poster thing says and is it really as good as Titus claimed it to be back when the game was in development?. 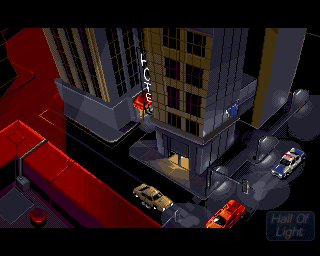 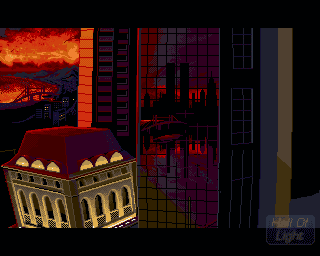 Crazy Cars III kicks off with a proper intro this time around, gone are that opening screen and that 1 sound sample on loop and in came a proper tune, a good one too i might add. The intro is far from flawless, it does what it was intended to do but that is all, it is too short and boring to watch it often.

The intro music is also the loading and menu music so you will hear this tune quite a lot, you will grow tired of it most likely. 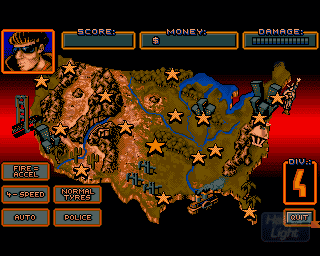 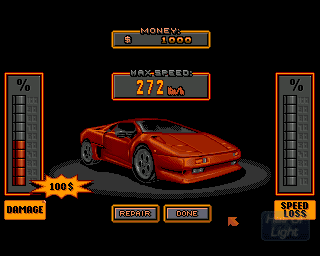 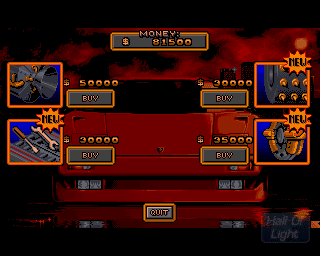 The game is laid out over a map of America, stars show the races and you have all sorts of screens, like a repair screen, upgrade menu, bet screen and so on.

Titus must have loved Street Racer or something as for some reason they added a betting system, it works ok enough and is a nice way to speed up your upgrade purchases. (You win bets by winning races/beating the opponent you put the bet on etc).

The upgrade system works great too, various stuff to be bought and they do affect the gameplay too. 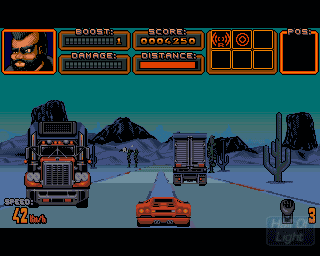 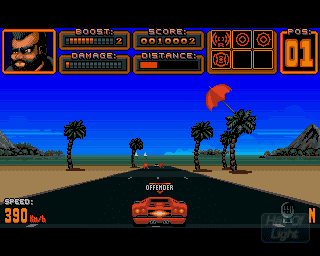 There are so many cool features within this game that it is impossible for me to remember them all, but here is a few of them… 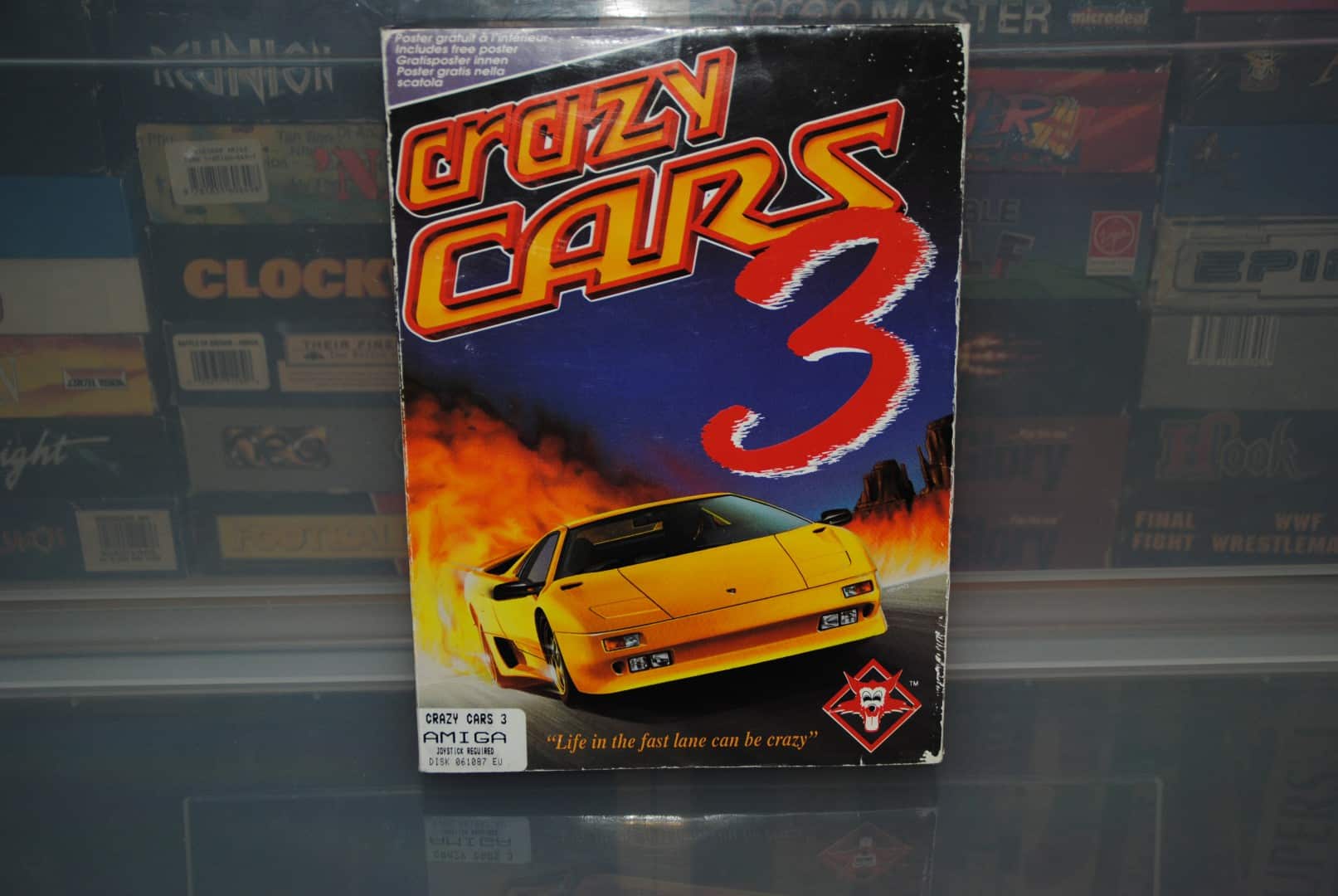 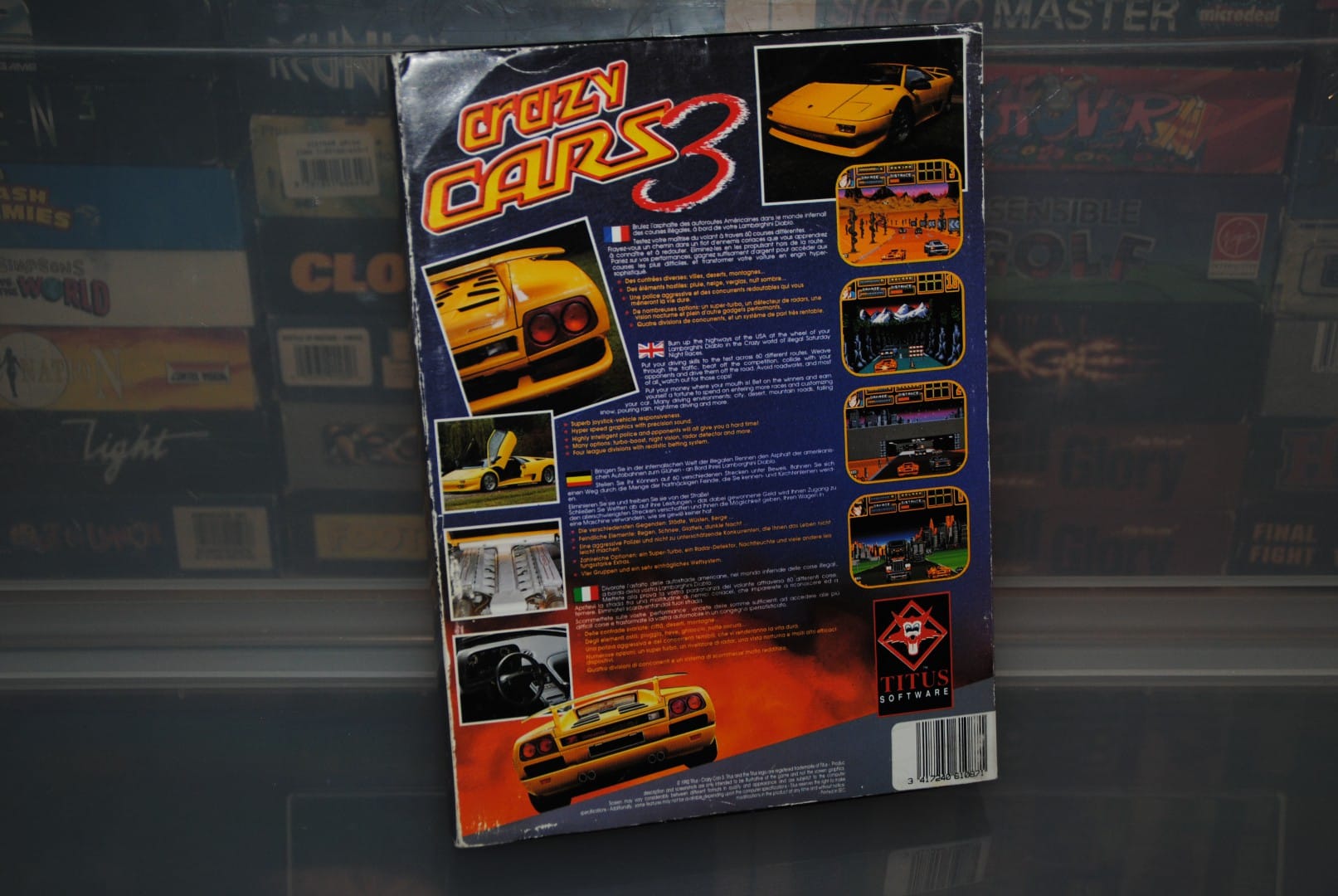 All these features and more make it one of the best racers on the Amiga 500, it is amazing how Titus managed to turn the series around from very bad to awesome.

Crazy Cars 3 is not just awesome, it is a technical marvel too and with one of the best adverts of its time, yes that counts too.

The box design is actually pretty good too and while i got the game first via piracy channels i still went and bought the game soon after, like with all other games that i liked although being young and with limited money, it took years for some games to end up in my collection. 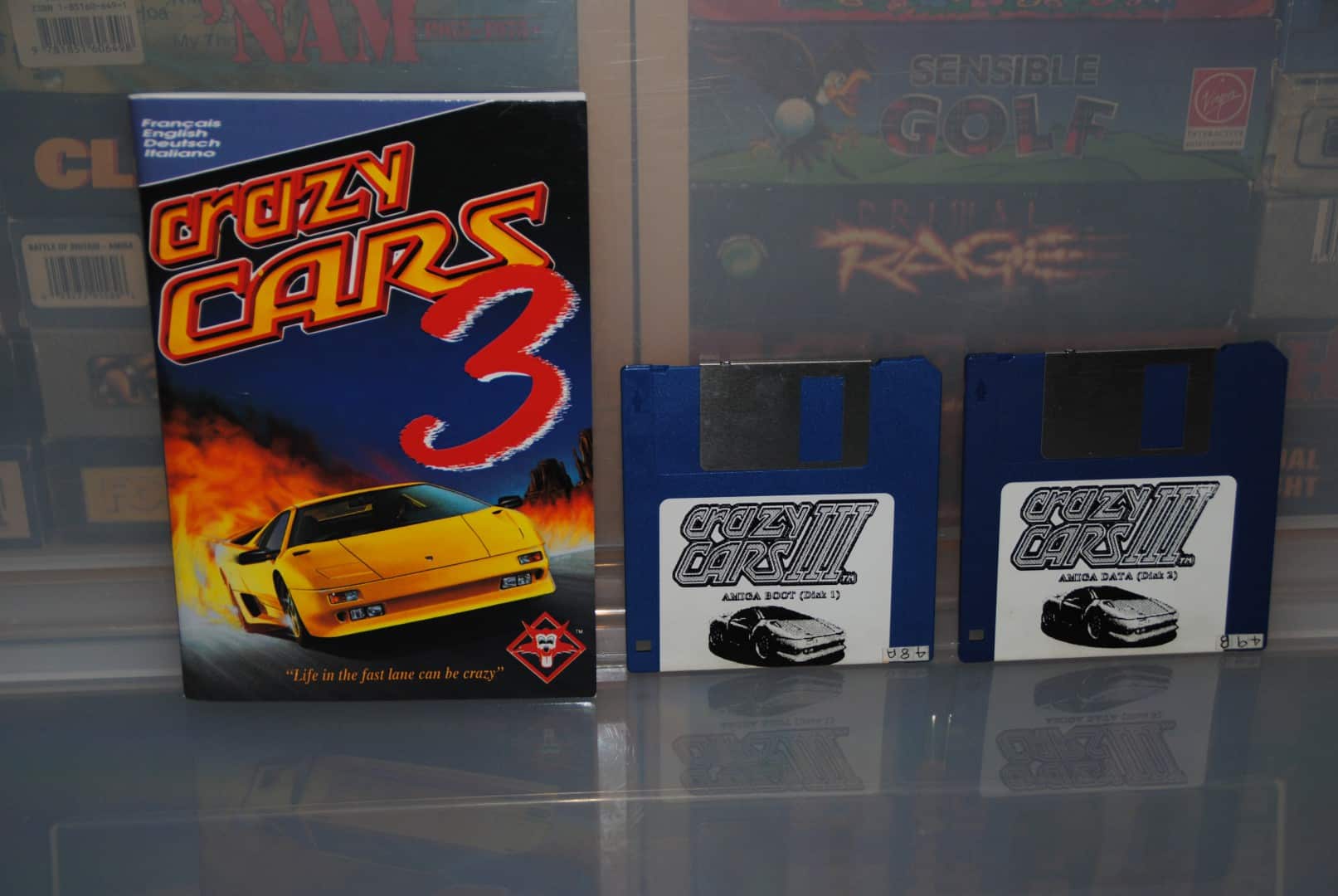 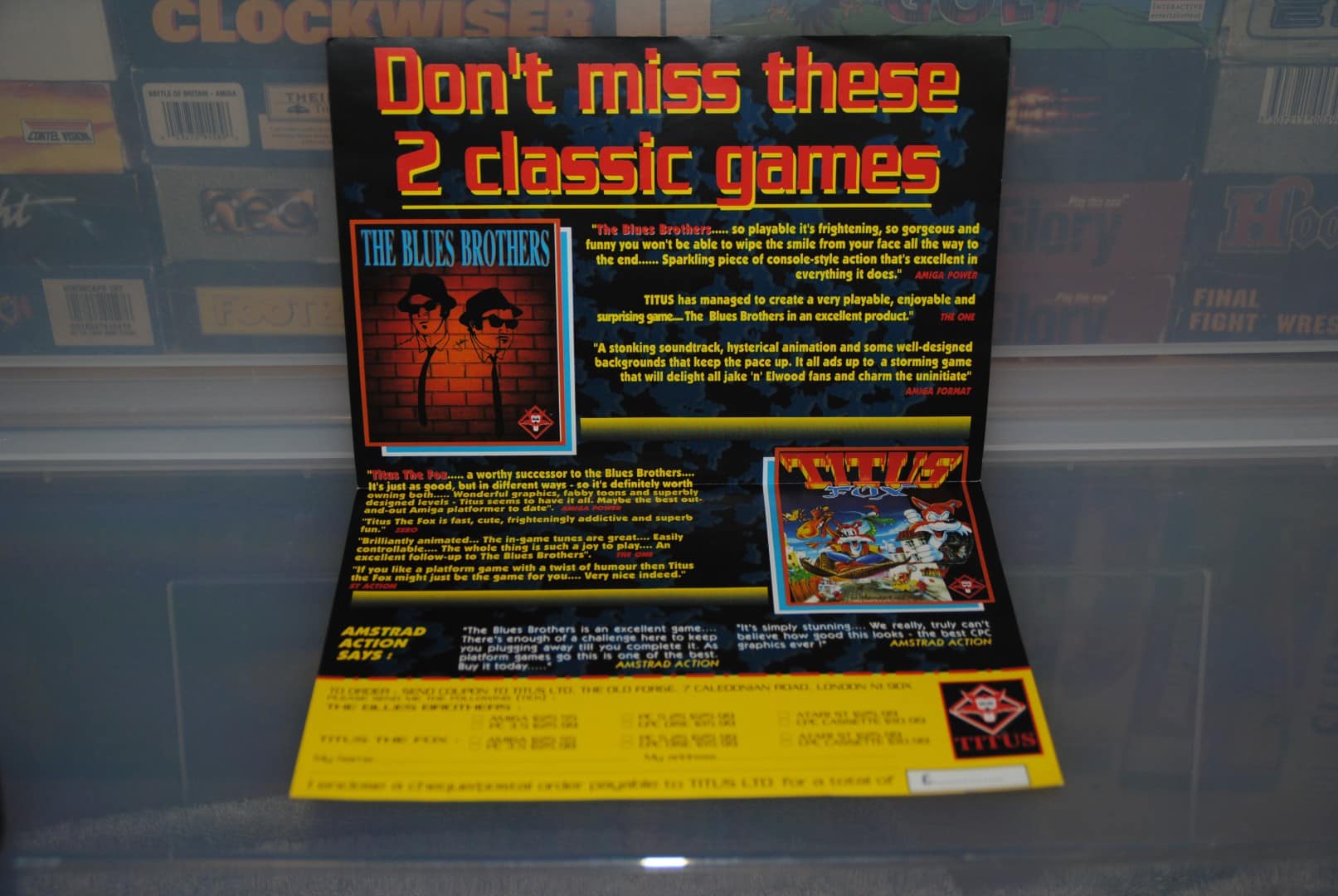 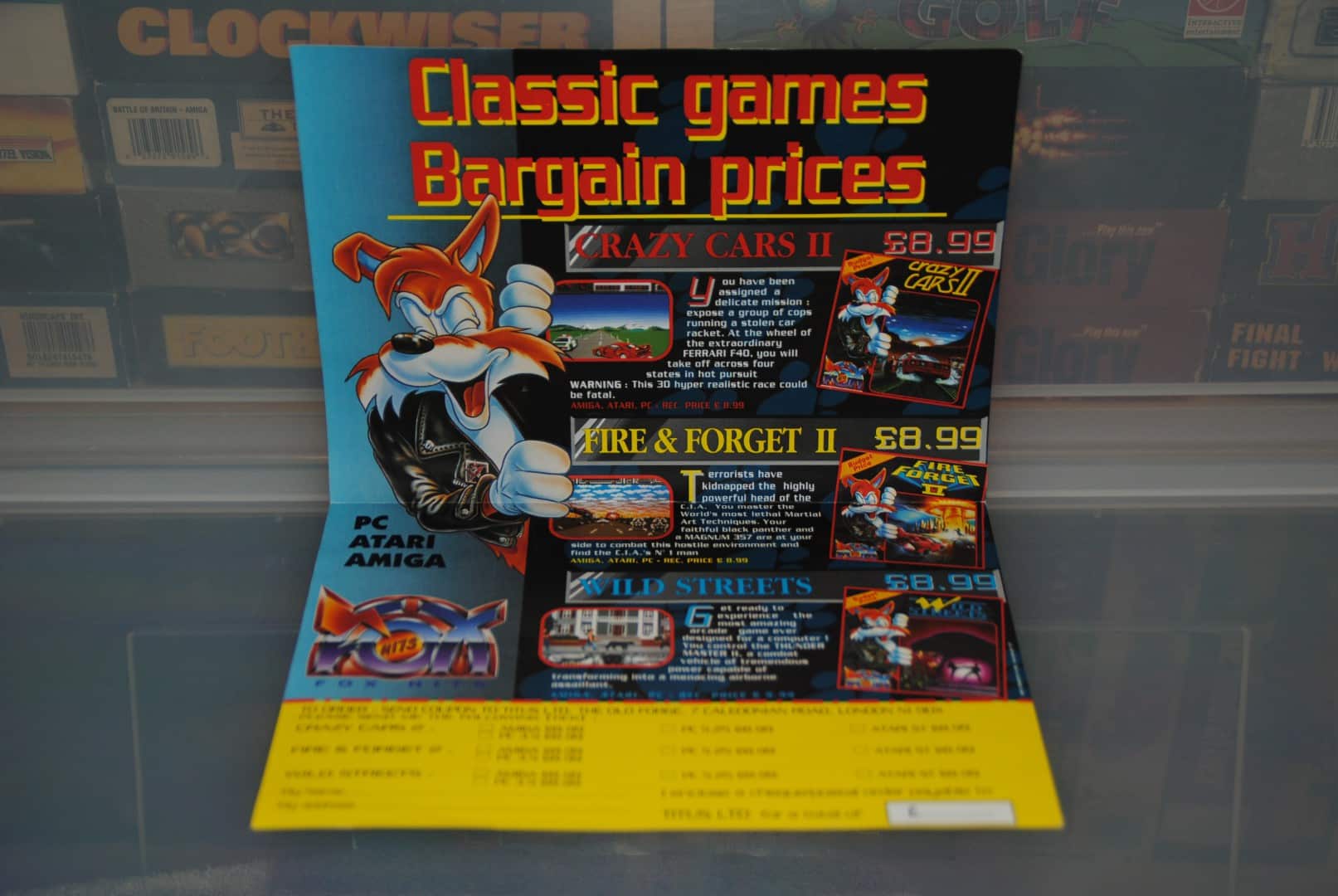 Titus never used to have all that many extras in their game boxes so these advertisements was a welcome treat and they made me buy those two games too, Blues Brothers is another Titus extravaganza. I might do an article about it soon.

Crazy Cars III was the last game in the series on the Amiga, or that is what we thought at first…

Lamborghini American Challenge (L.A.C from now), came out 2 years after Crazy Cars III and at first glance, it looks exactly the same as it, and that is indeed correct because this game is actually a rebranded version of Crazy Cars III.

Licensing cars and brands were getting popular and this is most likely the only reason for the name change.

So was this update only because of the name change? no not really no as the game actually had new features, features that gamers out there had asked for.

This new game/update featured everything from Crazy Cars III but also added a 2 player Split Screen mode, this was in many gamers eyes the only thing that made Lotus 3 a better game over Crazy Cars III. 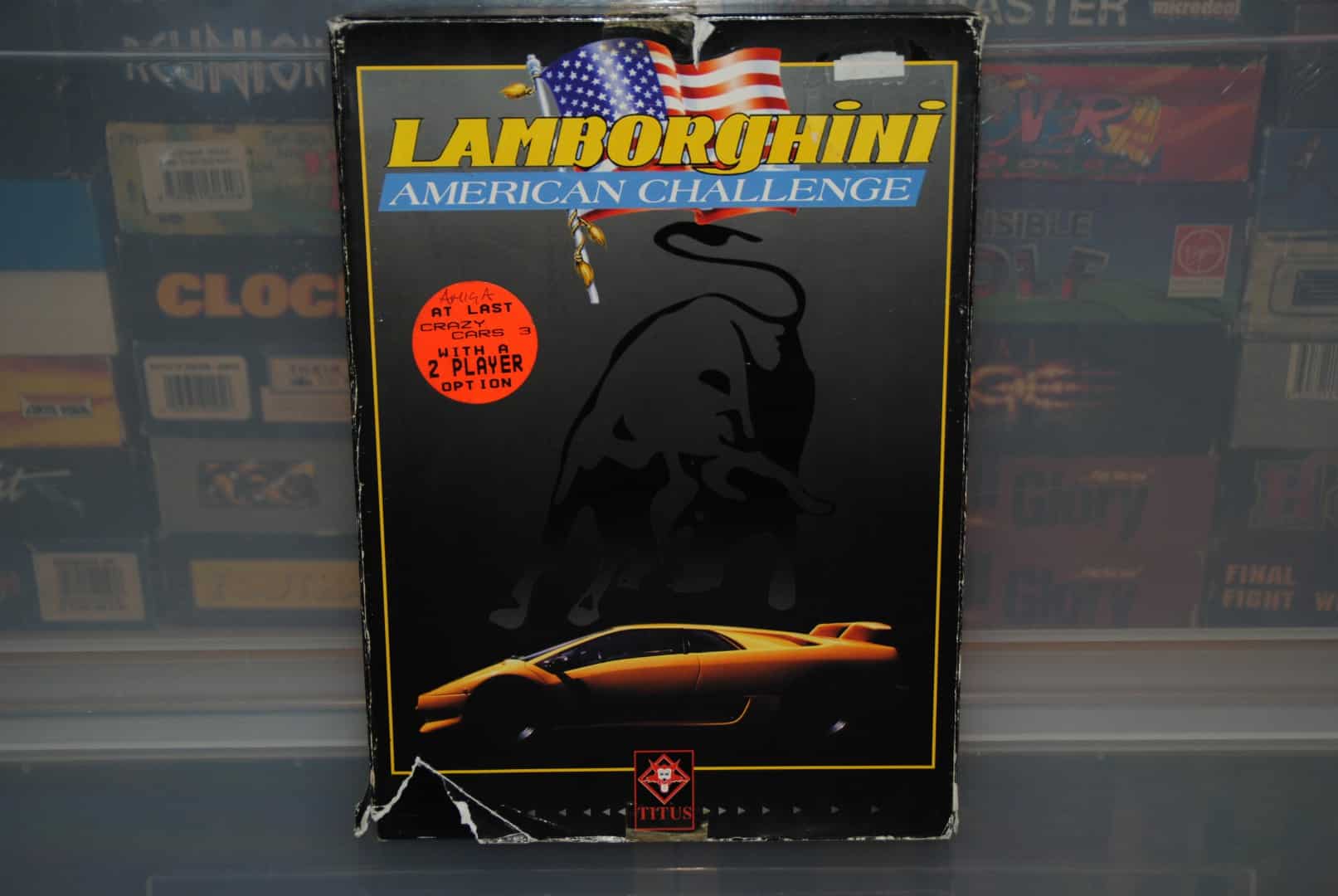 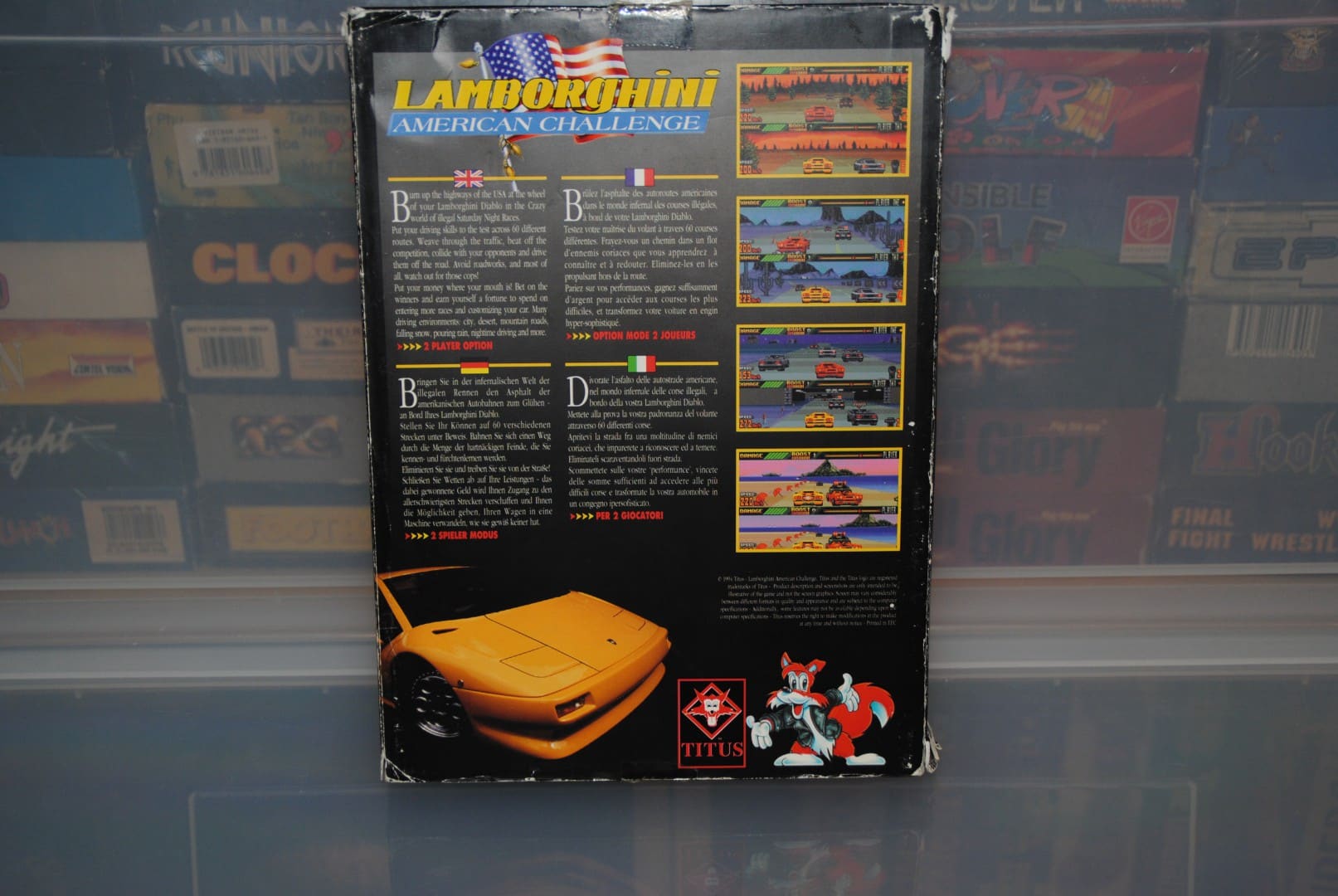 L.A.C was Titus’s swansong on the Amiga, it was their last game and one of their all-time greatest at the same time and one of the main reasons why i still think highly of Titus today.

This updated version does have its faults though, the framerate in 2 player split-screen can be quite bad at times and the draw distance is limited due to the size of the screen. But that is where the negative stuff ends.

Well, ok one more thing, L.A.C’s box design is far from as explosive as CCIII and is, to be honest quite boring and lacking. 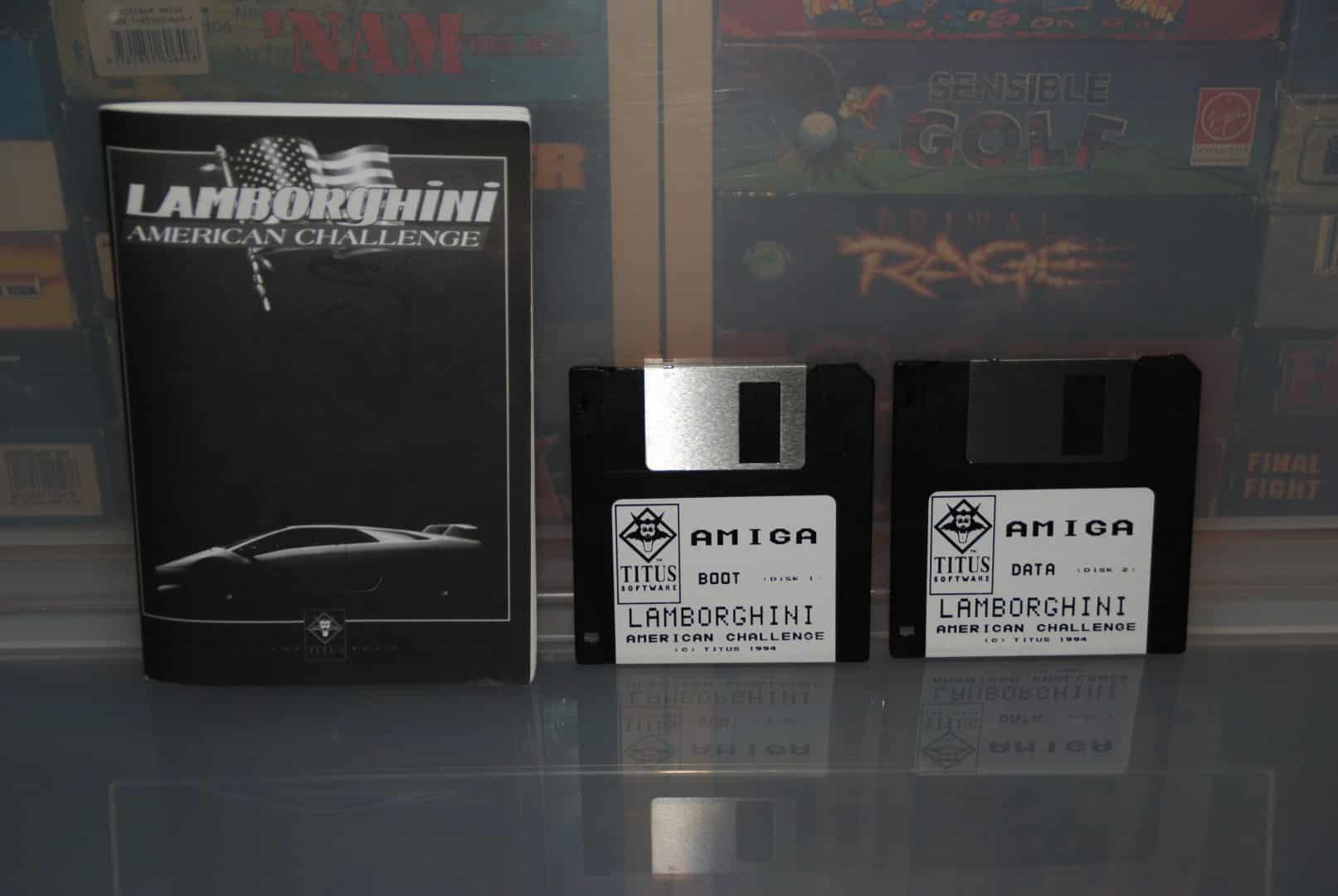 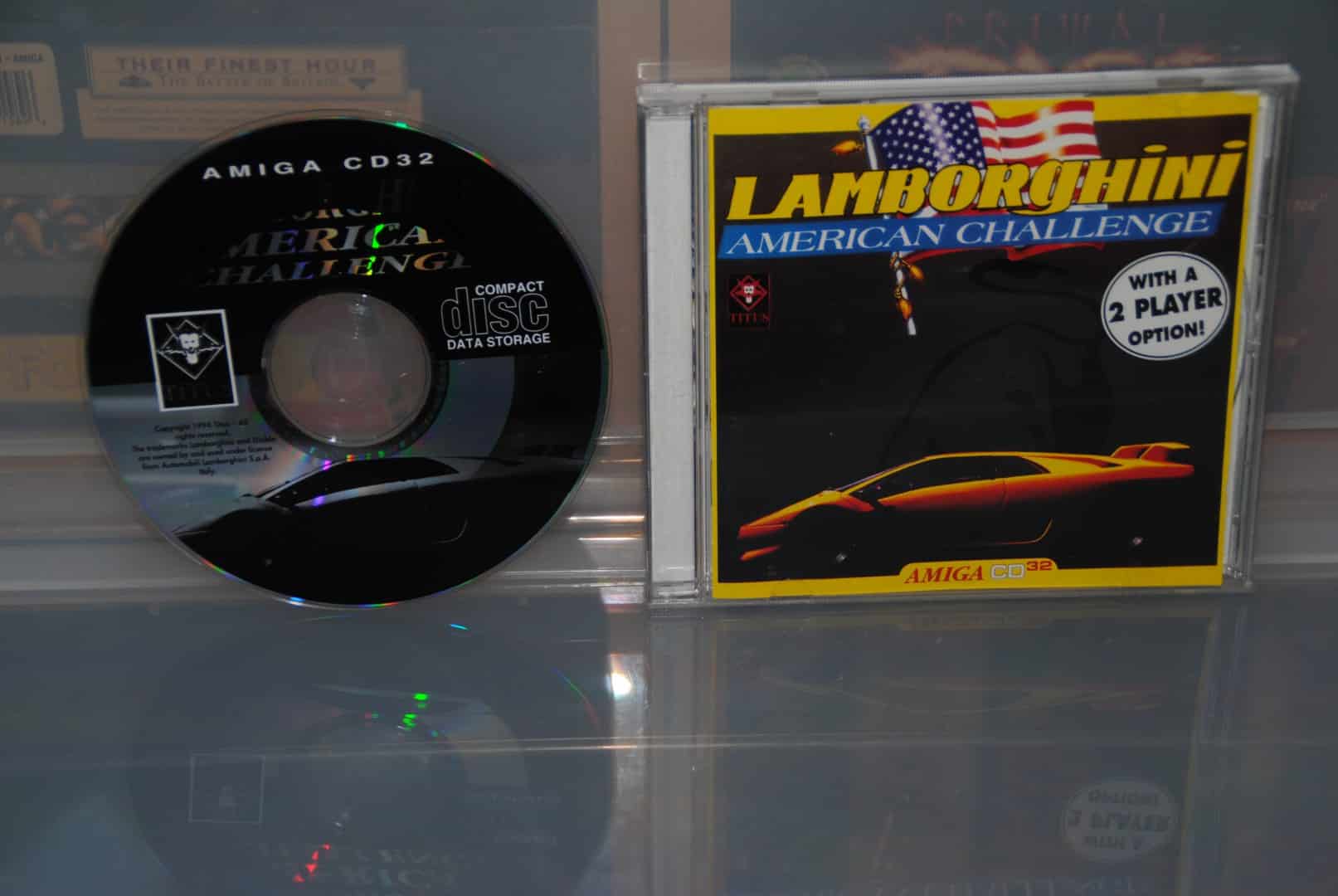 L.A.C was also released for the Amiga CD32 and maybe best of all, it was released as a freebie, yes, it was free!. The game came with Amiga CD32 gamer magazine and they naturally hailed the game up into the skies albeit they forgot to mention how the game was identical to the floppy version, absolutely no changes what so ever.  Nice freebie still though.

Never tried the Crazy Cars series? do it, do it now.

As a footnote, there was another Lamborghini game in 1997 from Titus, it was released on various formats but not for the Amiga, i have never tried it so i will not comment on it for now.

Also, Crazy Cars the series was revived in 2012 for the mobile (iOS/Android) and PC market, i have not tried the games but it looks a lot like the Asphalt series, checks the screenshot below. 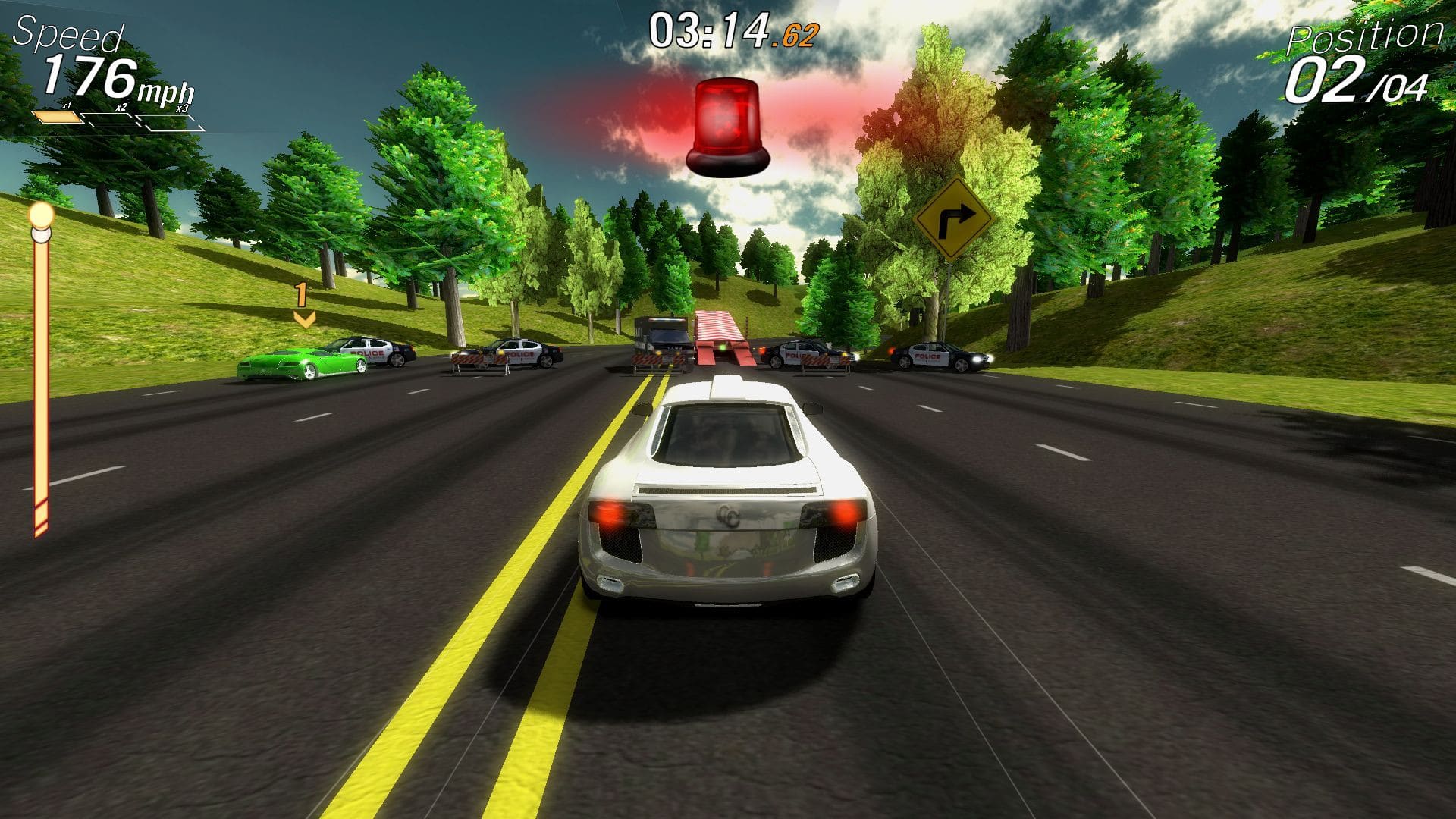 And with that bombshell, Thanks for your time.

8 thoughts on “Can Crap Turn To Gold? – The Crazy Cars Trilogy + 1 And A Reboot”