OutRun to me is one of my happy places, it always makes me happy. The music, the tracks, driving a Ferrari Testarossa 85 and the whole style and how it took the world by storm.

On the other hand, the Amiga version makes me quite sad, a missed opportunity. The C64 and the Arcade version was a gazillion time better compared to the one(s) on the Amiga. The strangest thing about all of this is how i still bought the game and a lot of versions of it too.

On the way home from work the other day i wondered about doing an article about Out Run and it was pretty funny how the music track from ” Teddybears Sthlm – Yours To Keep ” started playing on the stereo.  The lyrics fit OutRun pretty good actually.

– We can drive around with the top down, stereo turned up loud with a fat sound. Cause i am yours to keep if you want it. – 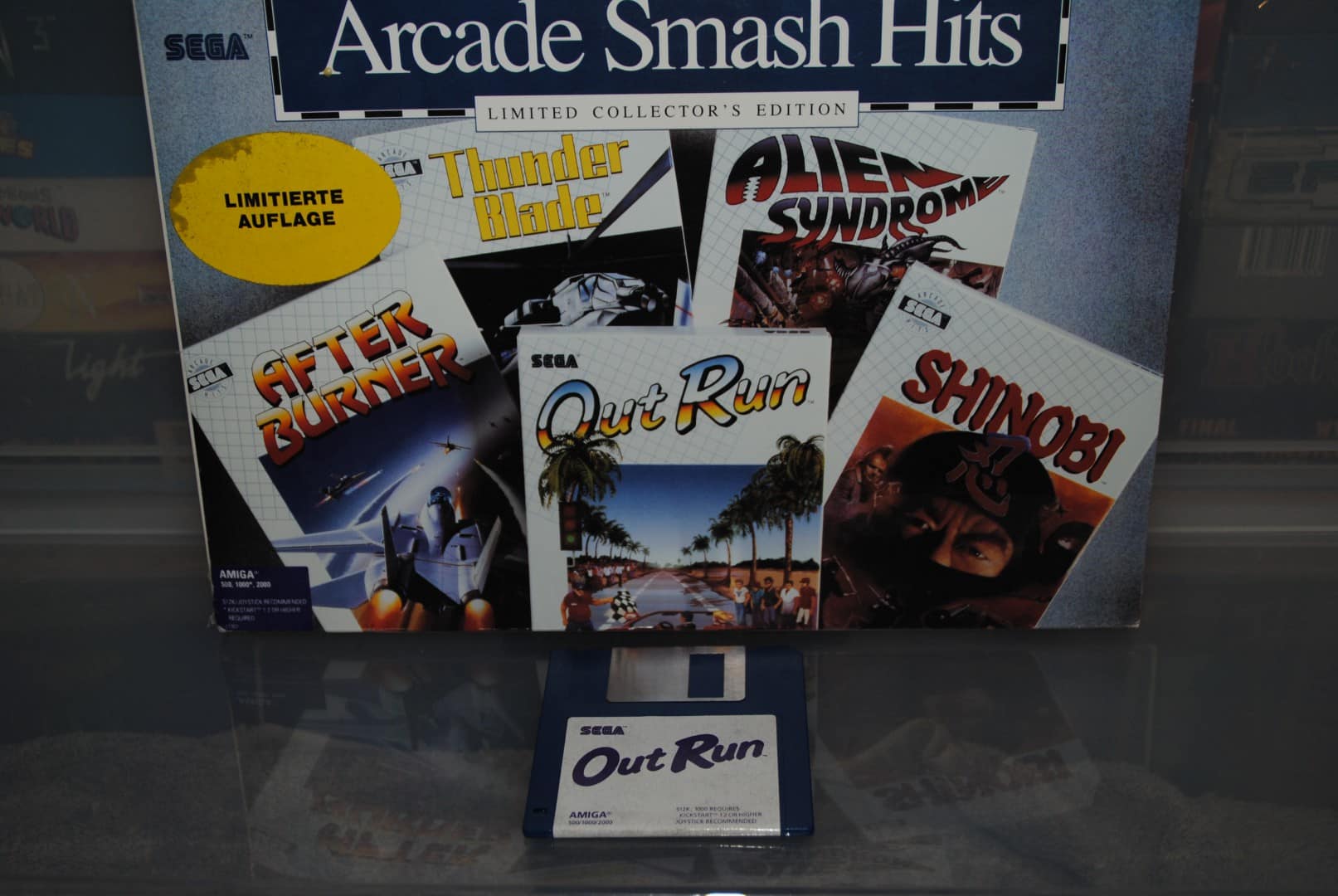 Ok, i got a lot of Out Run versions in my home and i have tried to get all of the Amiga versions but, i am not quite there yet.

First out is the Arcade Smash Hits version, i have written about this before on this very blog, it is one of the oddballs in the Amiga world, the floppy contains an American version of the game, a version which does look the same but in reality, it ain’t.   Quite a feat to include an American game in a European bundle and i bet it is even a cracked version ?. 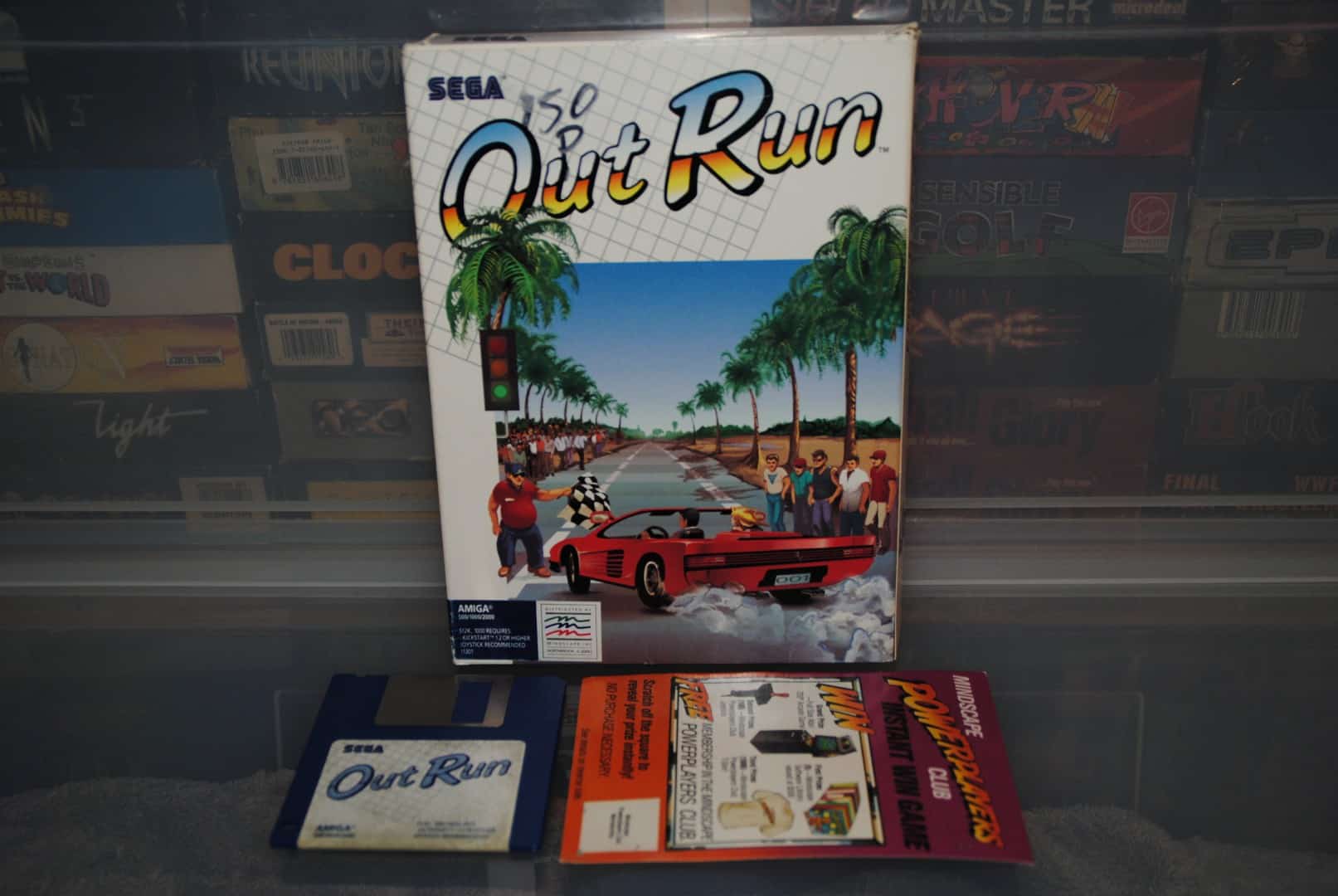 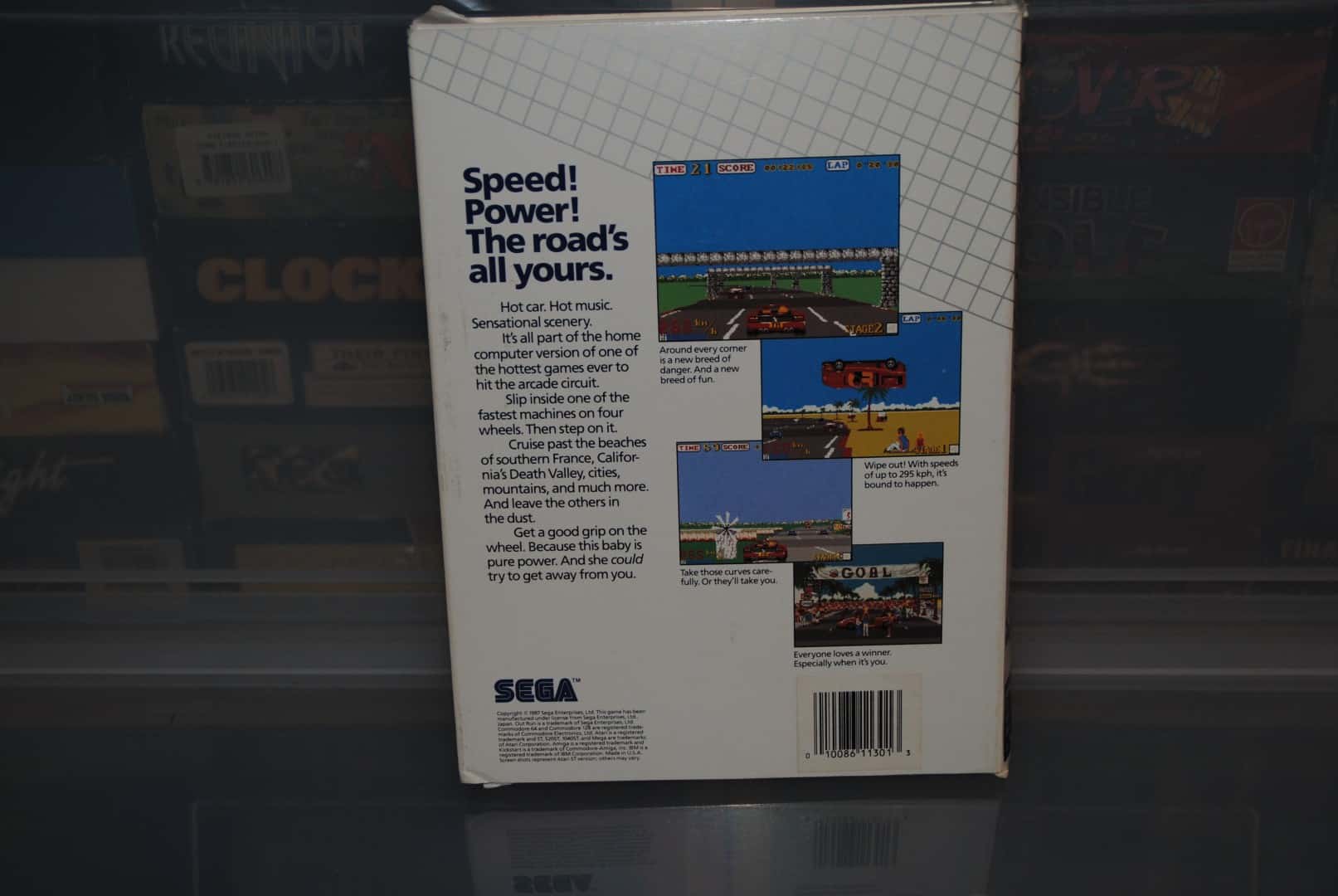 There are a few things about OutRun that ain’t common knowledge, both the C64 and Amiga had 2 different versions, 1 American and one European and both done by separate teams. Like the 2 versions above, they’re the US version and contains a new loading screen along with a new engine sound sample (intro). The game was also dumbed down a bit, it is easier (timer) and to me, it feels like there is less traffic too.

So this is where you go, there is only 1 version on the c64! nope, you’re wrong as there is actually 2 there as well.  I know, crazy!. 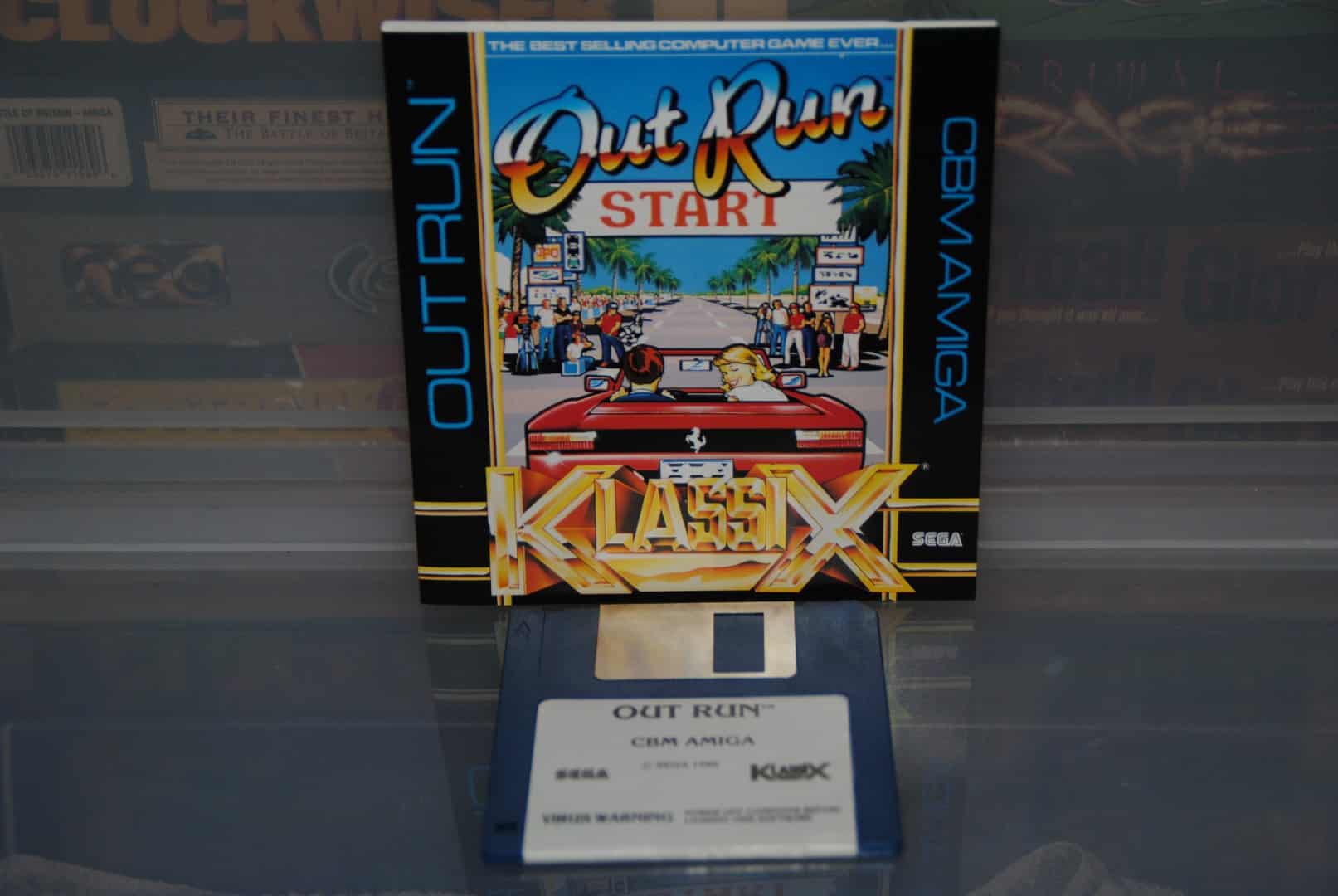 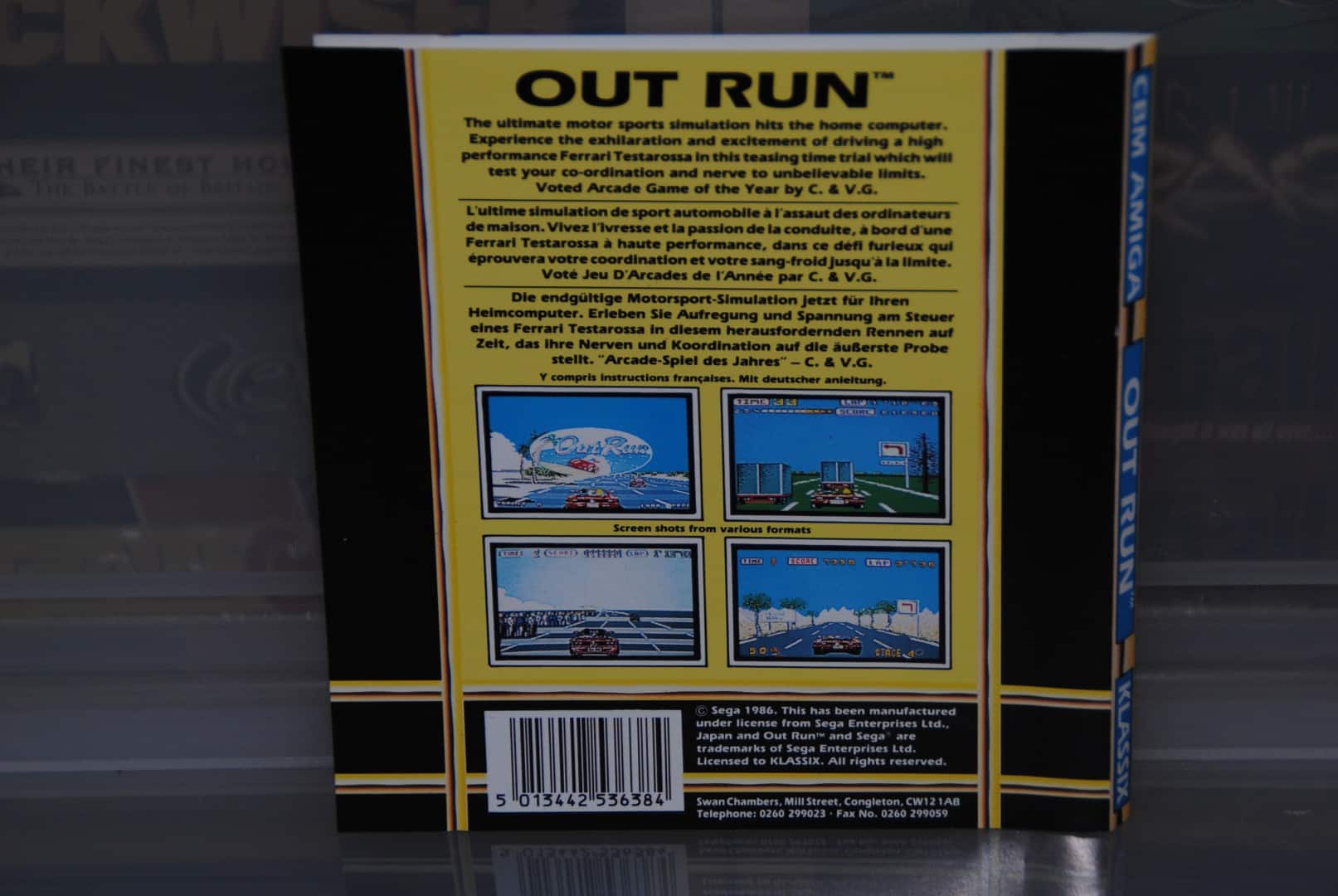 The Klassix brand was quite new to me when i spotted this one so naturally, i went all bananas and just had to get it, sadly it looks just like it was a German region brand for the Kixx label.

The Klassix box design looks quite boring, they added some black bars and changed the aspect ratio too although they do use the same pictures as most other European versions do. 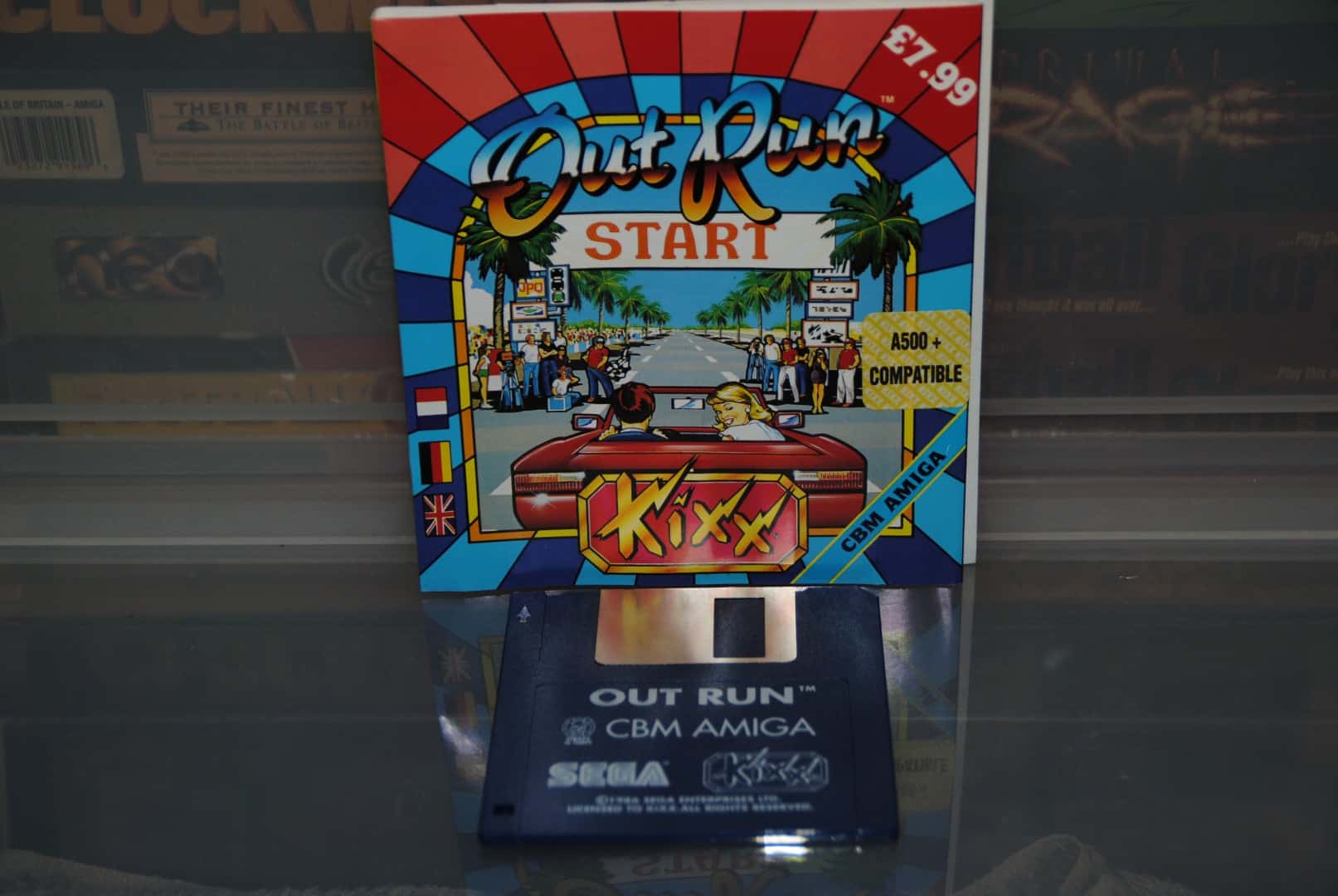 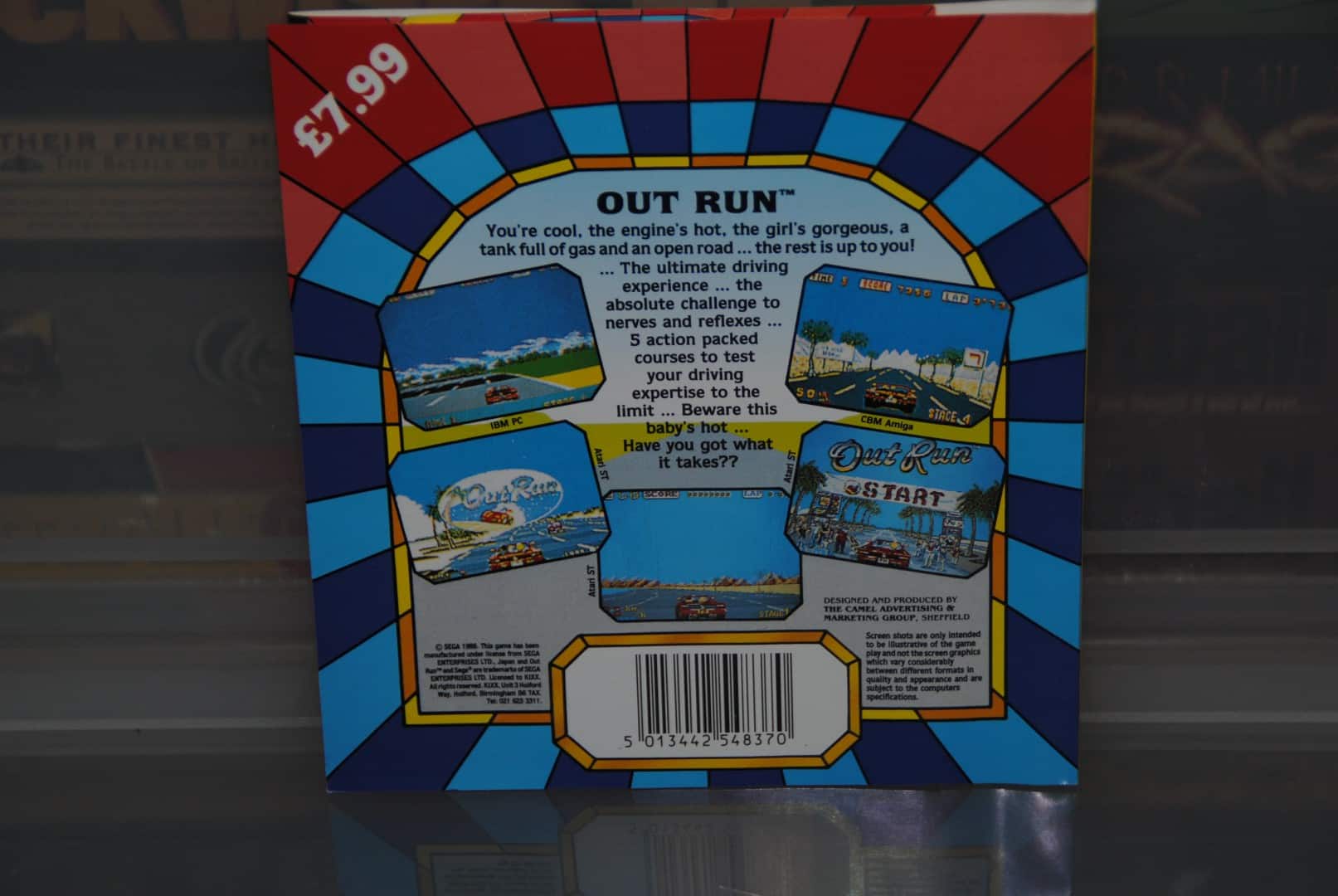 Out Run – Kixx Label. Amiga Back.

The Kixx version, i have always liked the look of both the “Kixx” and “Hit Squad” label box designs, might be only me but i feel they have actually spent some time on them compared to let’s say “Klassix” and “Respray”.

Not much to say really, i got the version from a local shop back in the day, i had no money really, yet i spent what i had on this game and another one and because of this, i had to live on bread and water for several weeks… 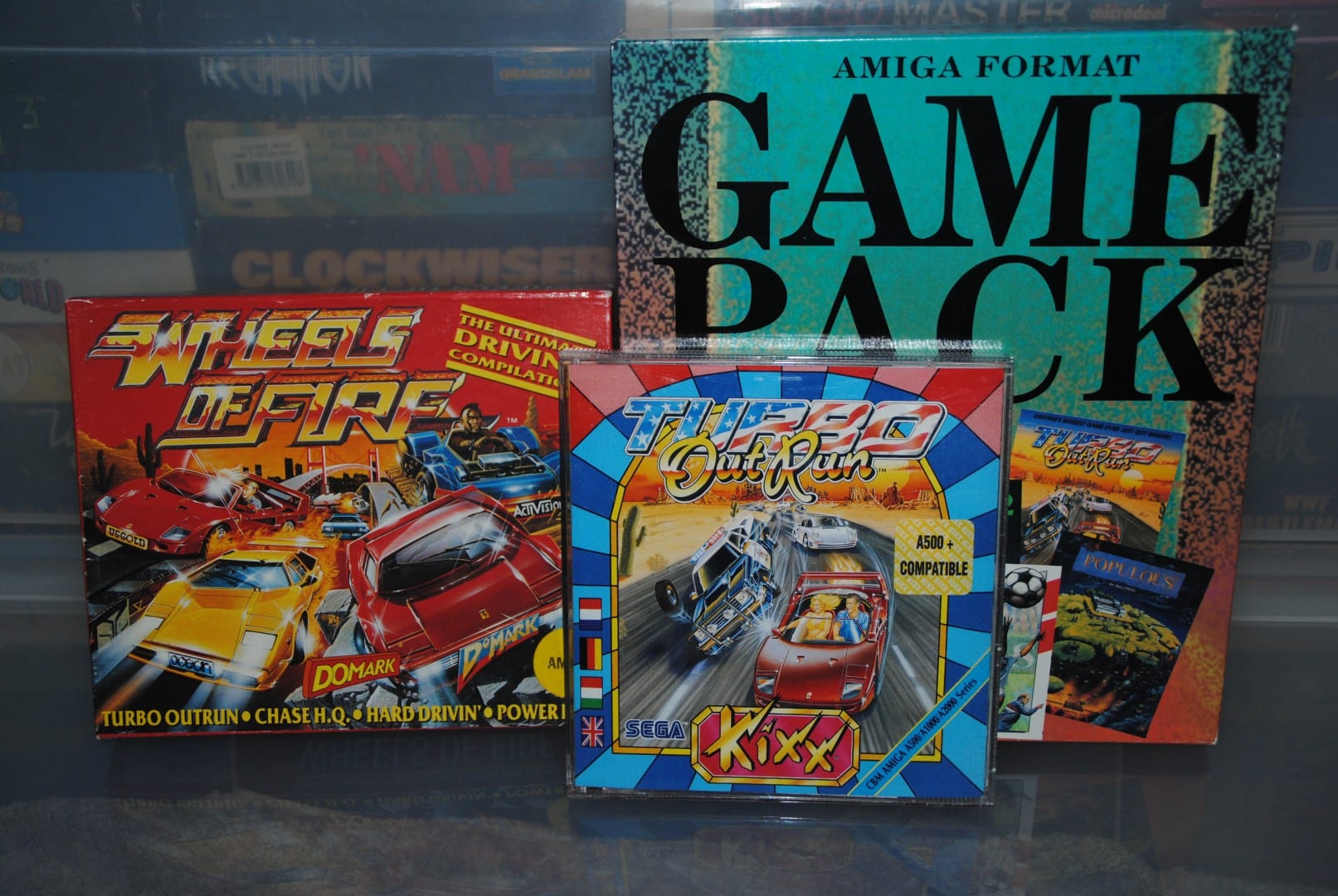 Next up is Turbo OutRun, the sequel to OutRun where they decided to include other car makes like Porsche etc, luckily the Ferrari was still in it.

I got 3 versions of Turbo OutRun and to be quite honest, this is the game in the series that i like the least, The coin-op version was quite ok to play but messy, SEGA decided to add a new graphic style to their games (Turbo Out Run, PowerDrift etc) and i feel that it didn’t work out all that good.

The C64 version was incredible for its time, and it has stood the 25 years of games too, amazing port of a not all that good game in the first place. 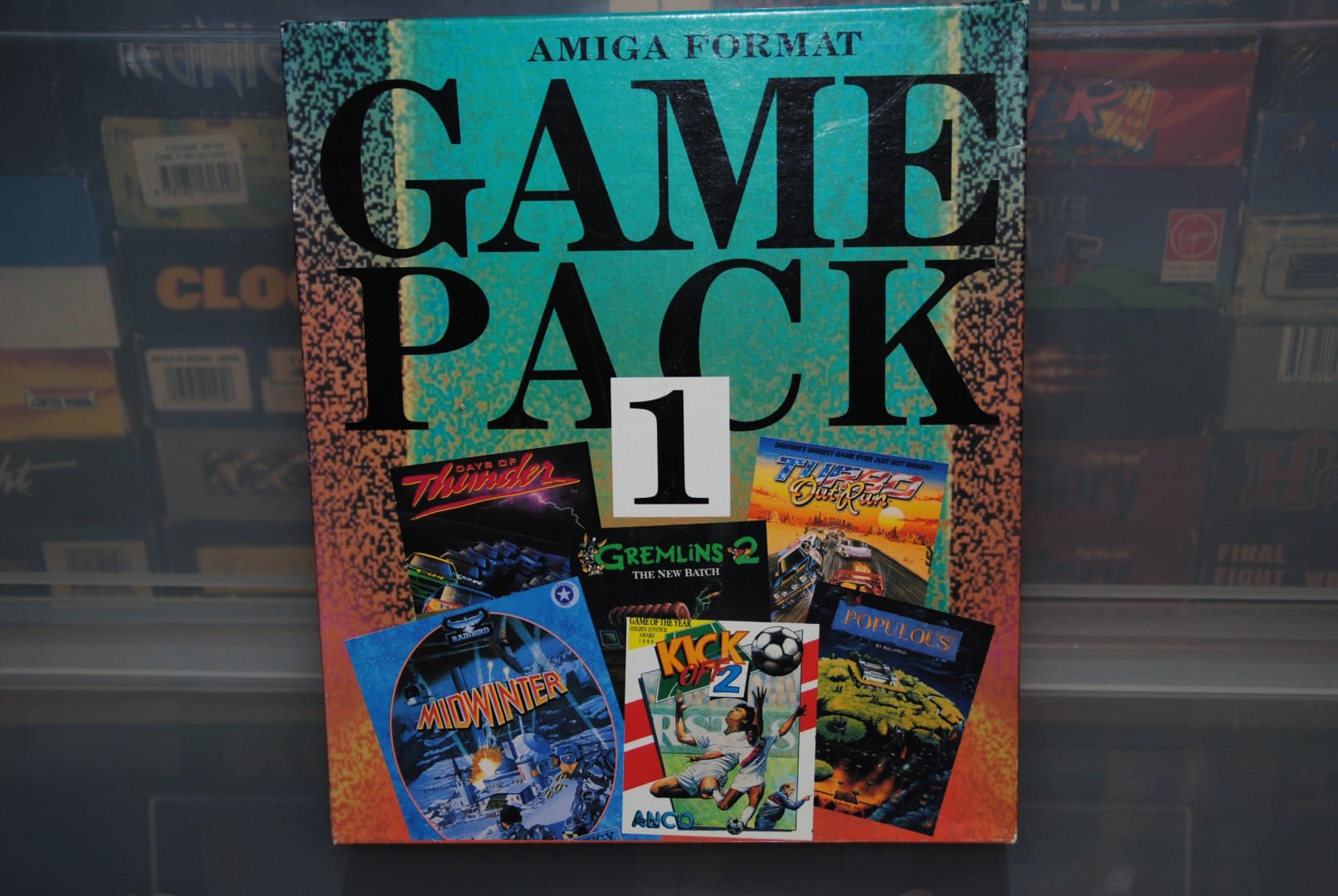 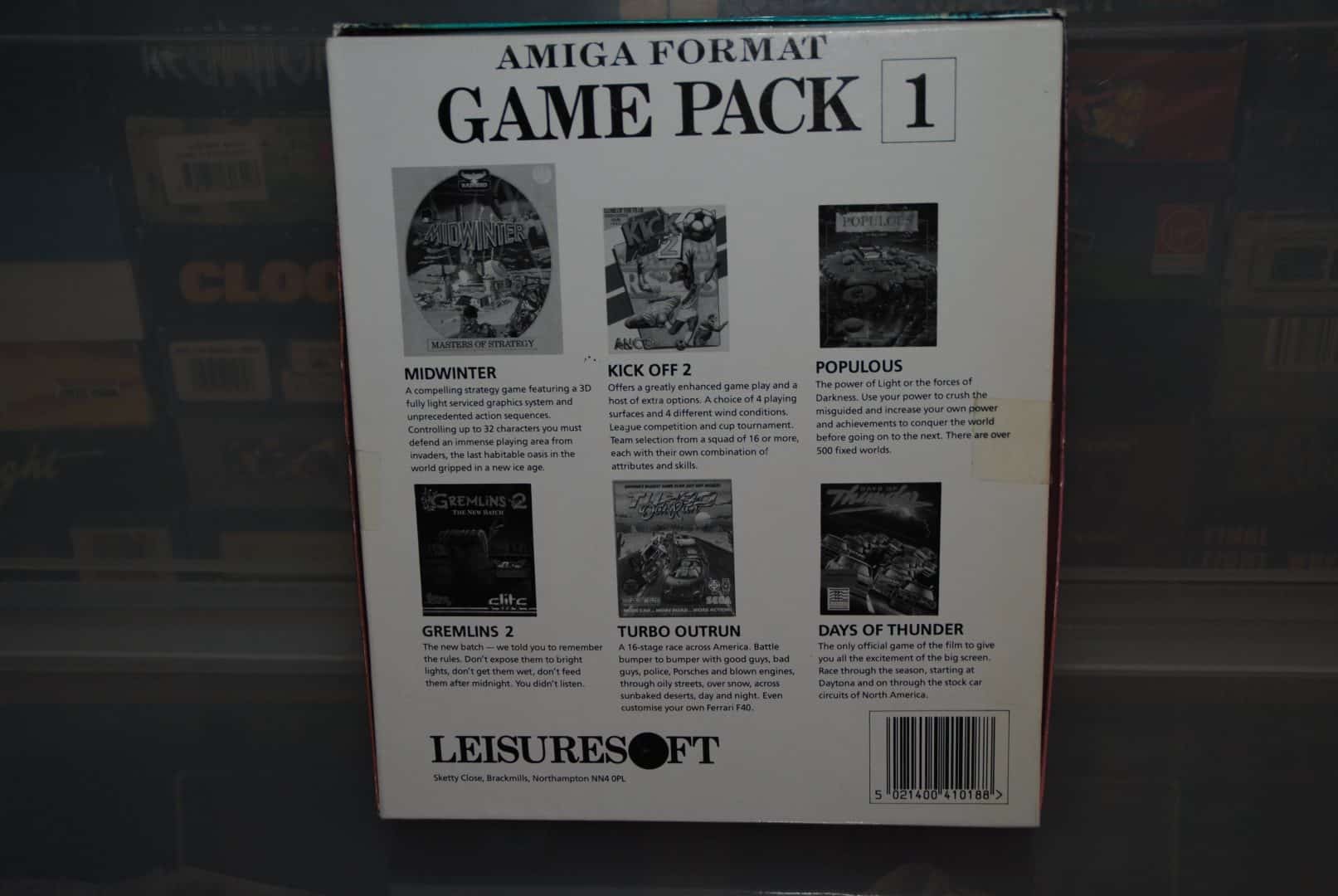 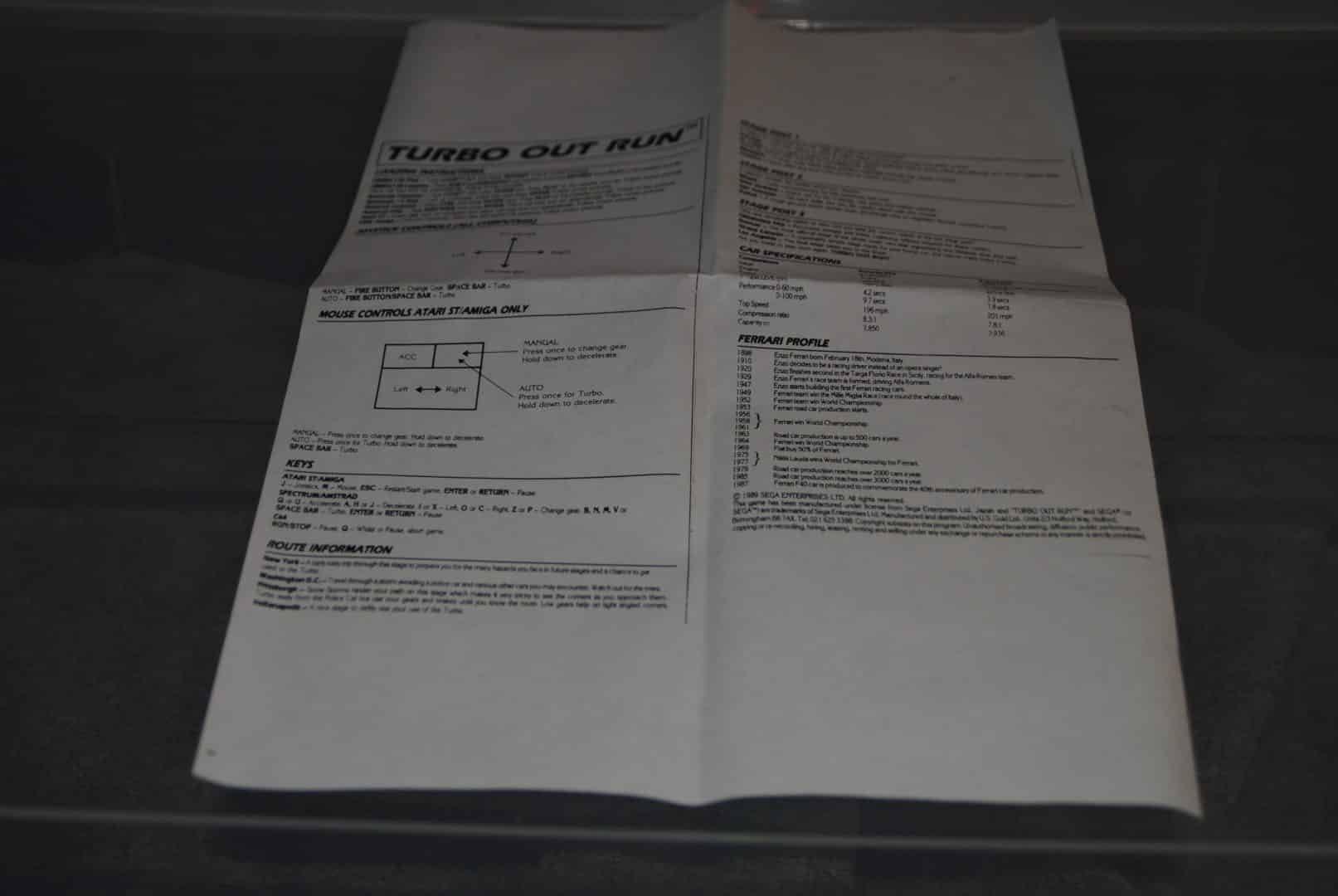 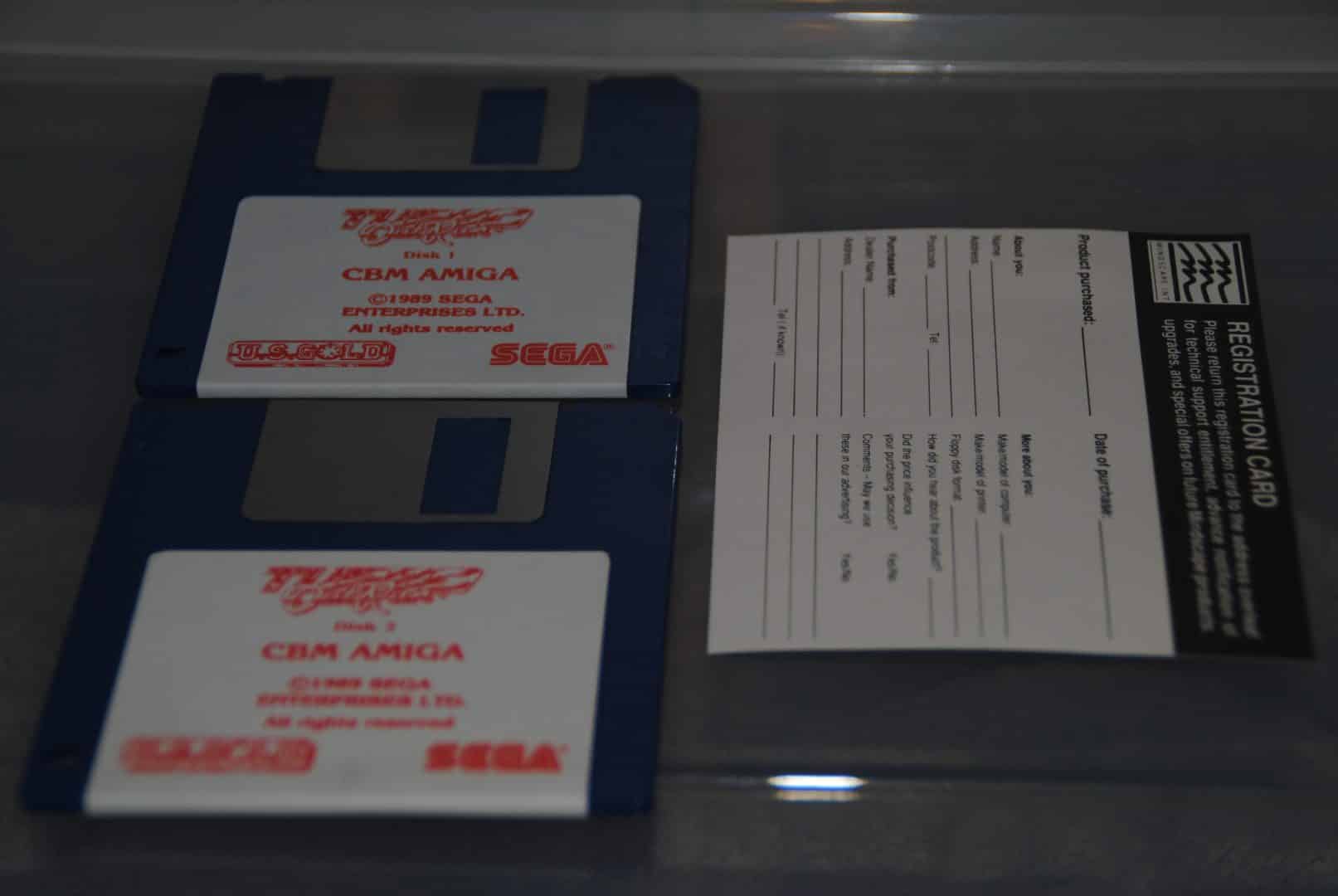 The Amiga version is not a bad port or anything, it is quite good although it just feels soulless and it makes me sleepy every time i try it.

OutRun as a series has always had kick ass music and this is no exception in Turbo Outrun either, all 3 versions (Amiga, C64, and Arcade) is a blast to listen to.

Amiga Format Game Pack 1 has Turbo Out Run in it and it is clearly one of the better games in it, i mean, seriously!, that Tom Cruise movie game – Days of thunder – is in there too… 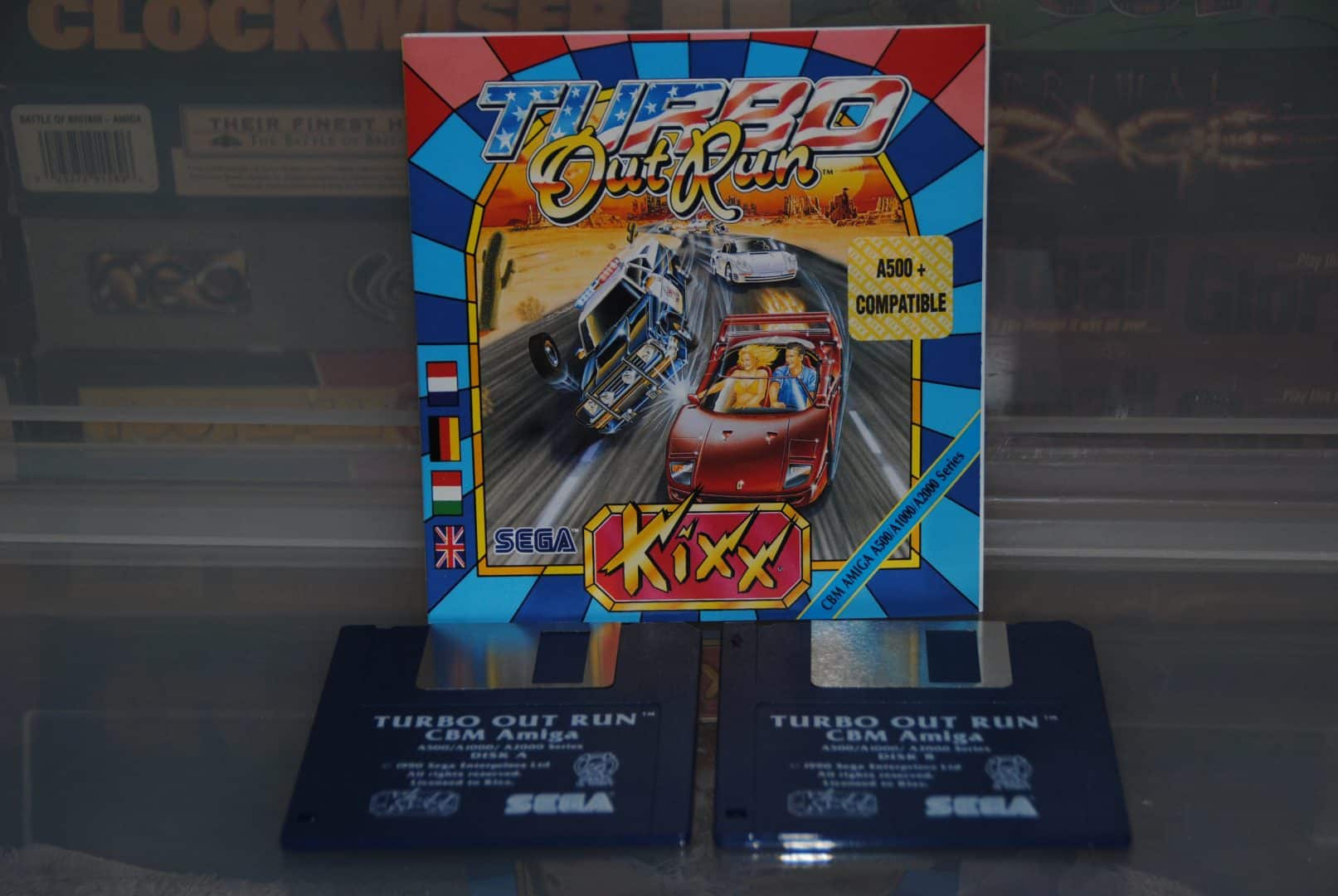 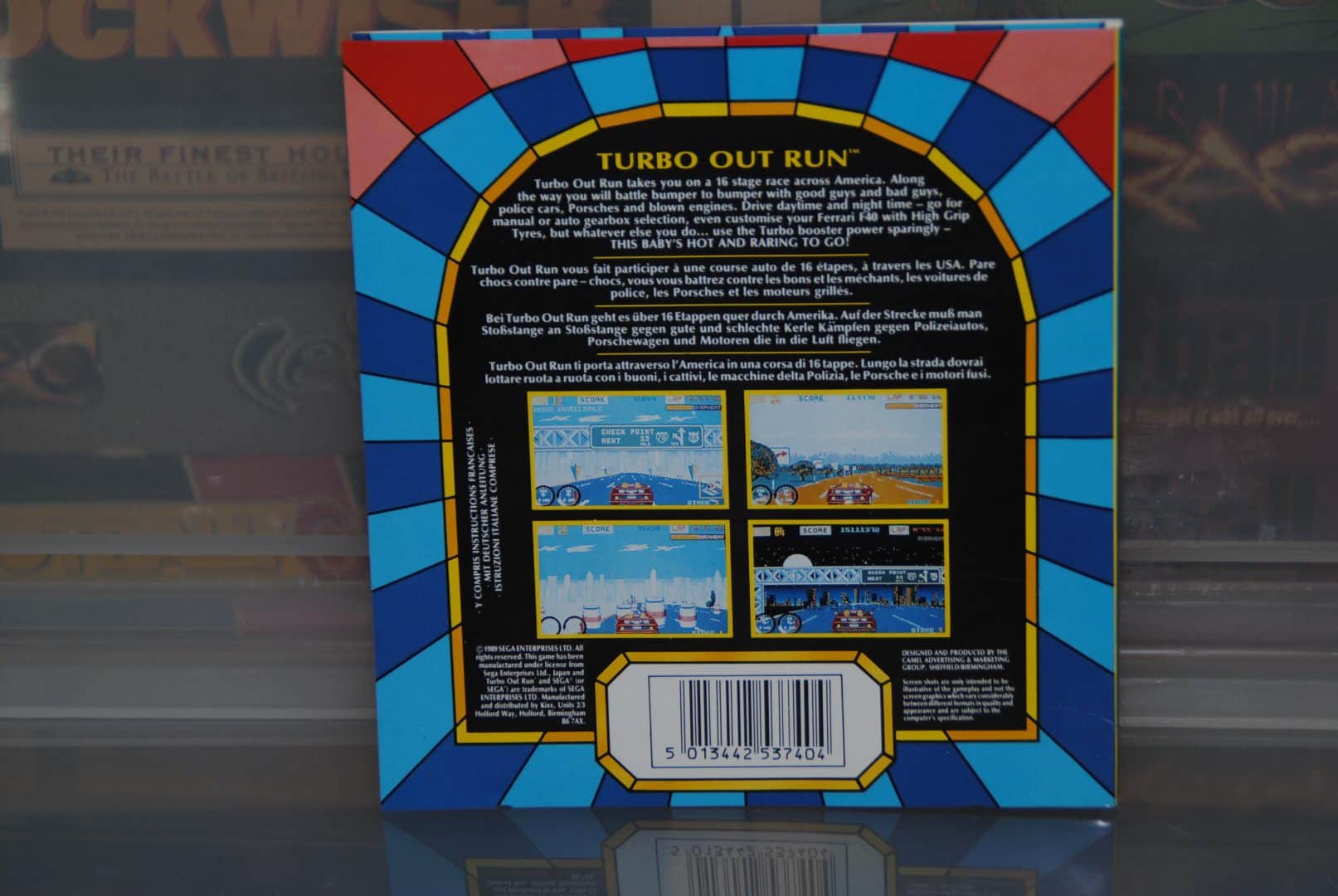 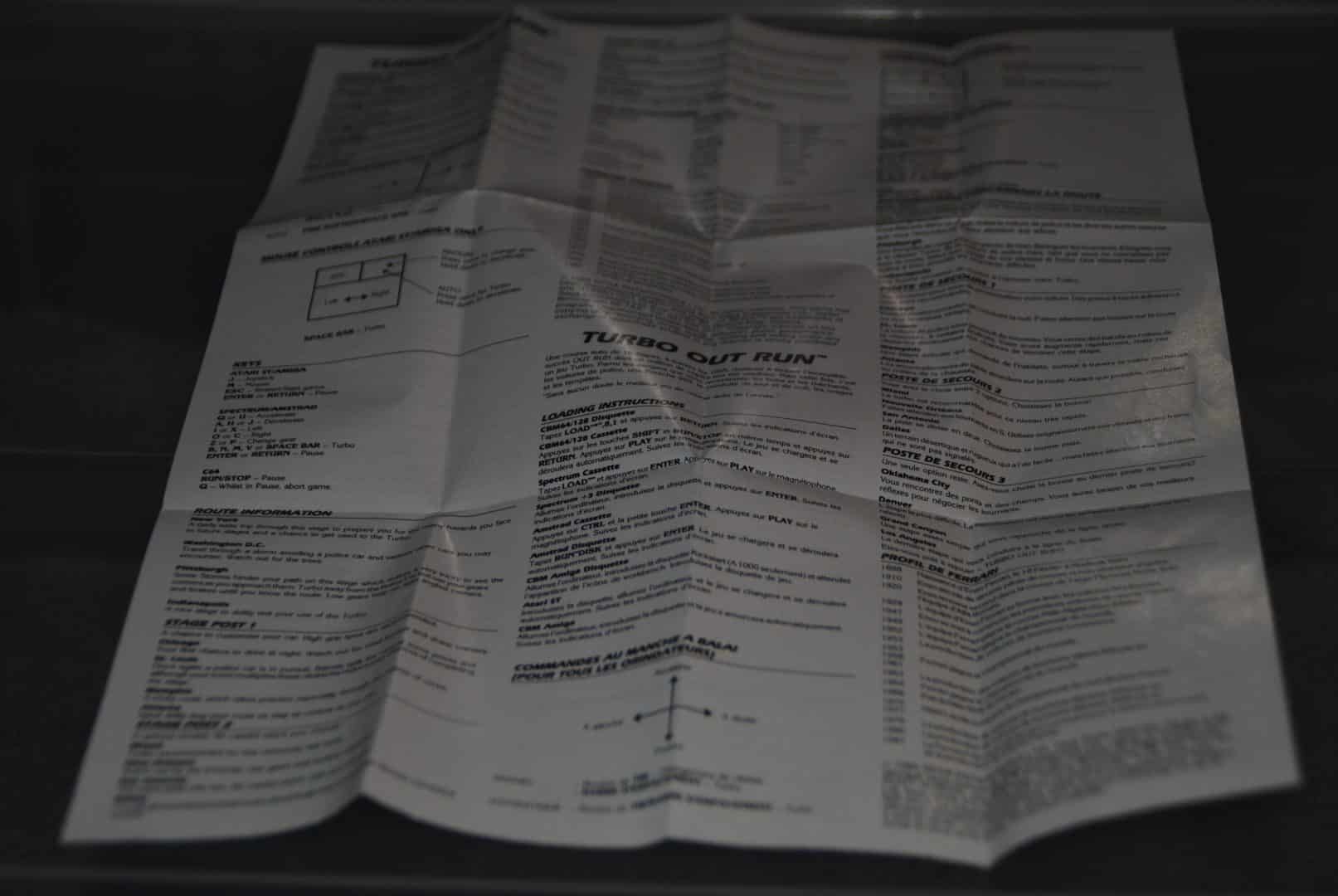 Turbo Out Run Kixx version, yet another Kixx version and for some reason, i forgot to take a picture of the poster on the back of the manual, oh well.

There ain’t two versions (region variations) for Turbo Out Run and i guess that is good although one does wonder if another version would have tweaked it to the better like, for instance, they did with ” Afterburner “. 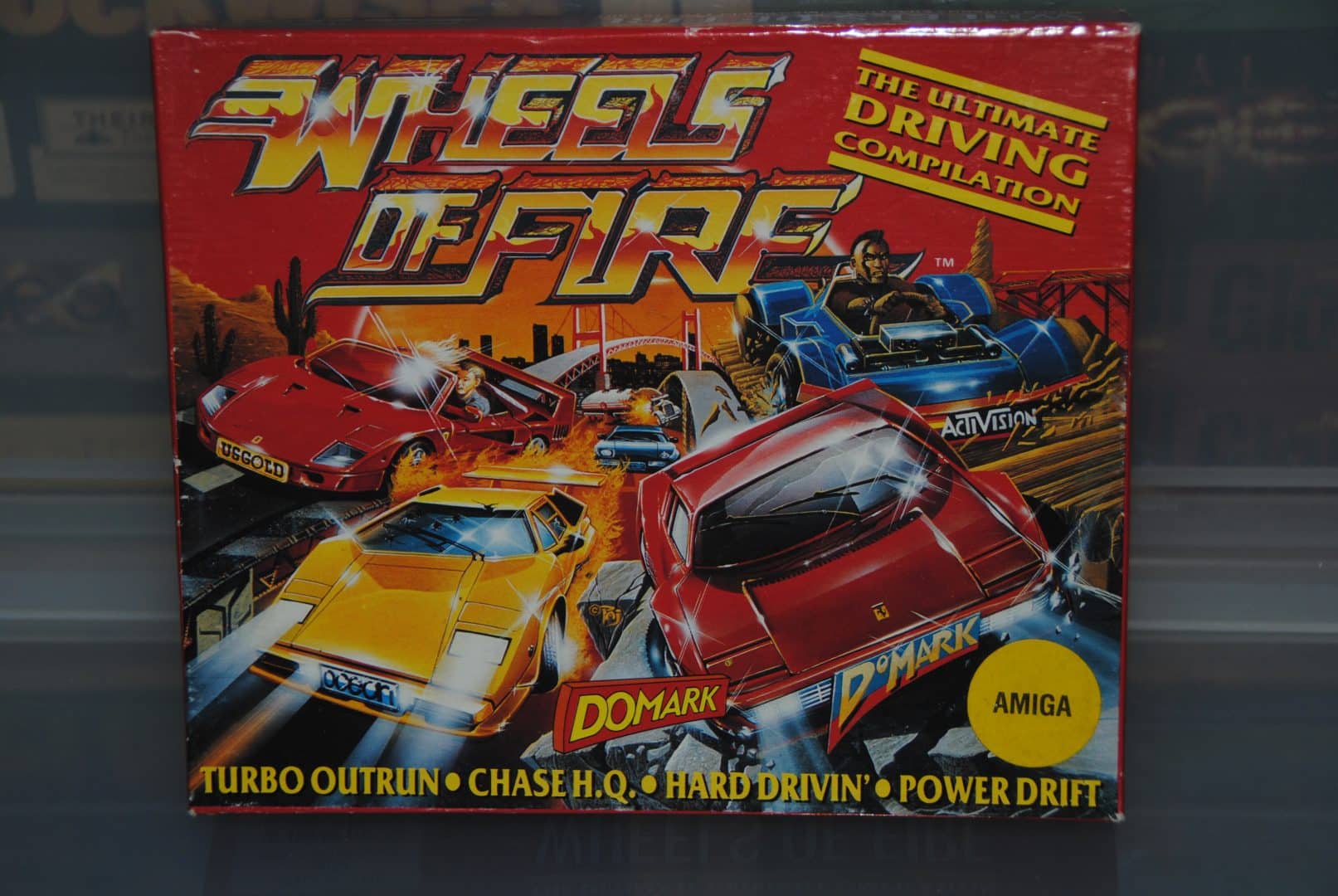 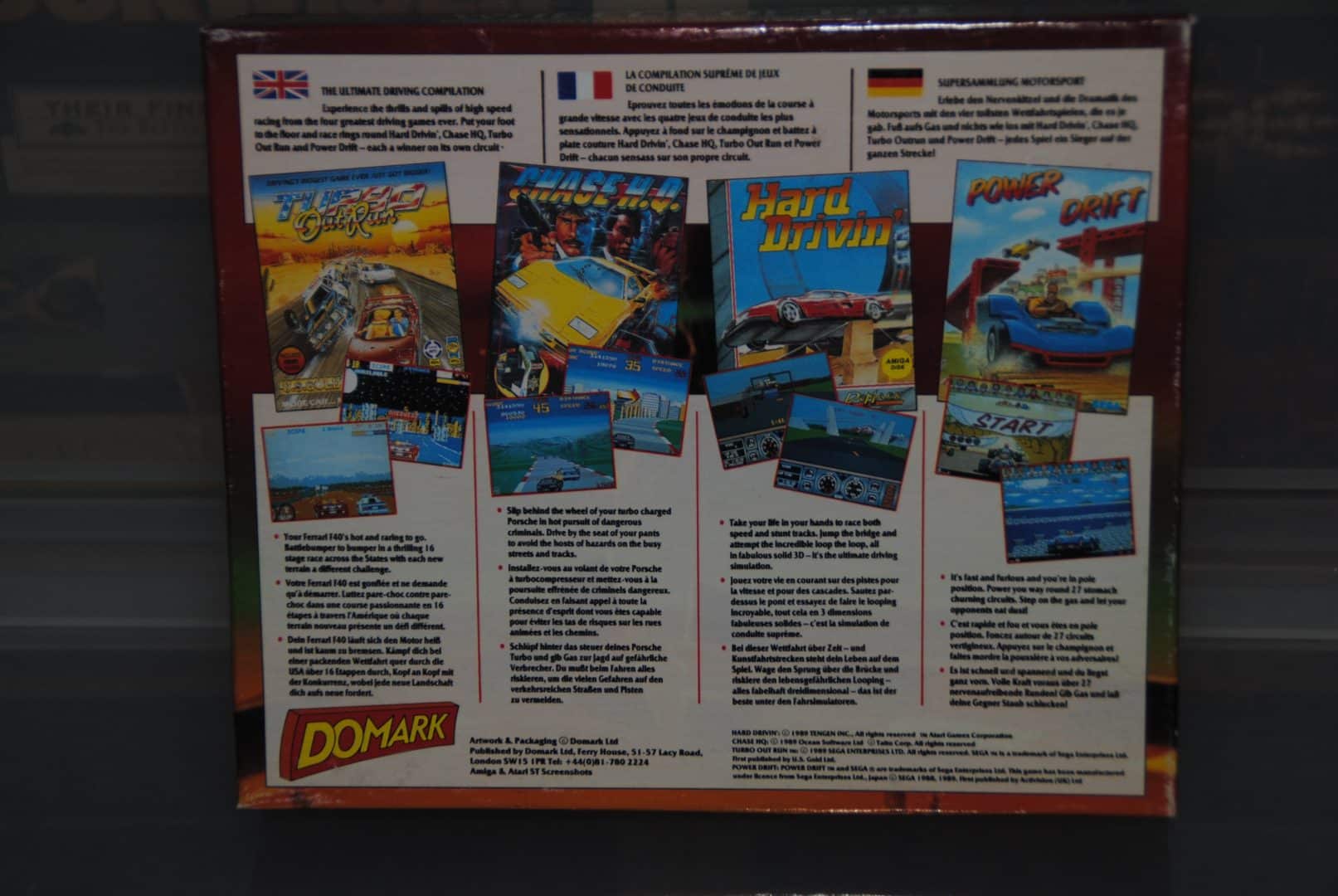 Yet another Compilation and it is a good one too, anyways this article is about the OutRun saga and I will stick to that for now. Not much to say here really, the bundled version is actually the nonbudget version and I guess that is positive at least and since i do not own the full box sized version (for now), well i guess this will have to do. (i bought this new back in the 90s just like all the other Amiga games in the series). 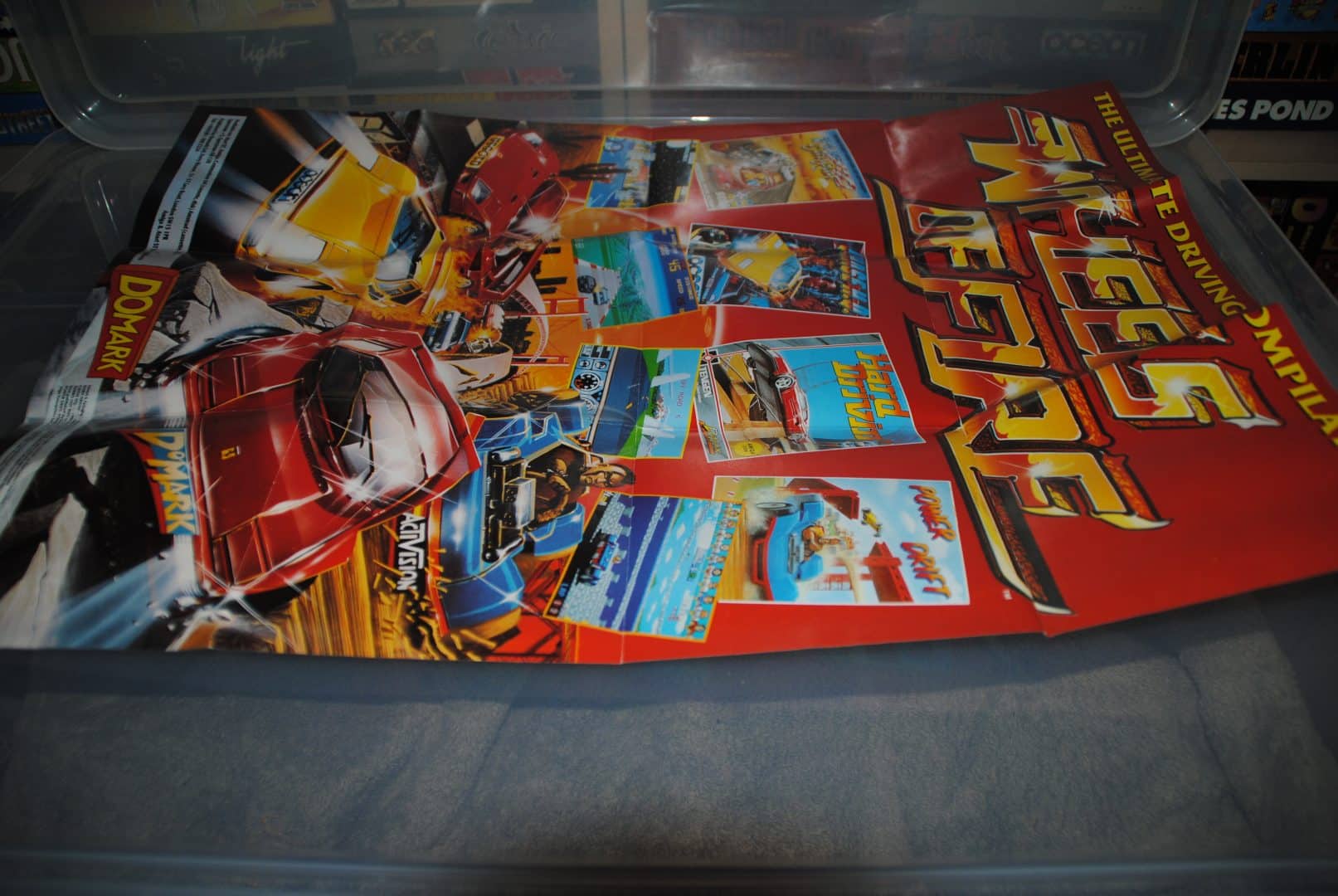 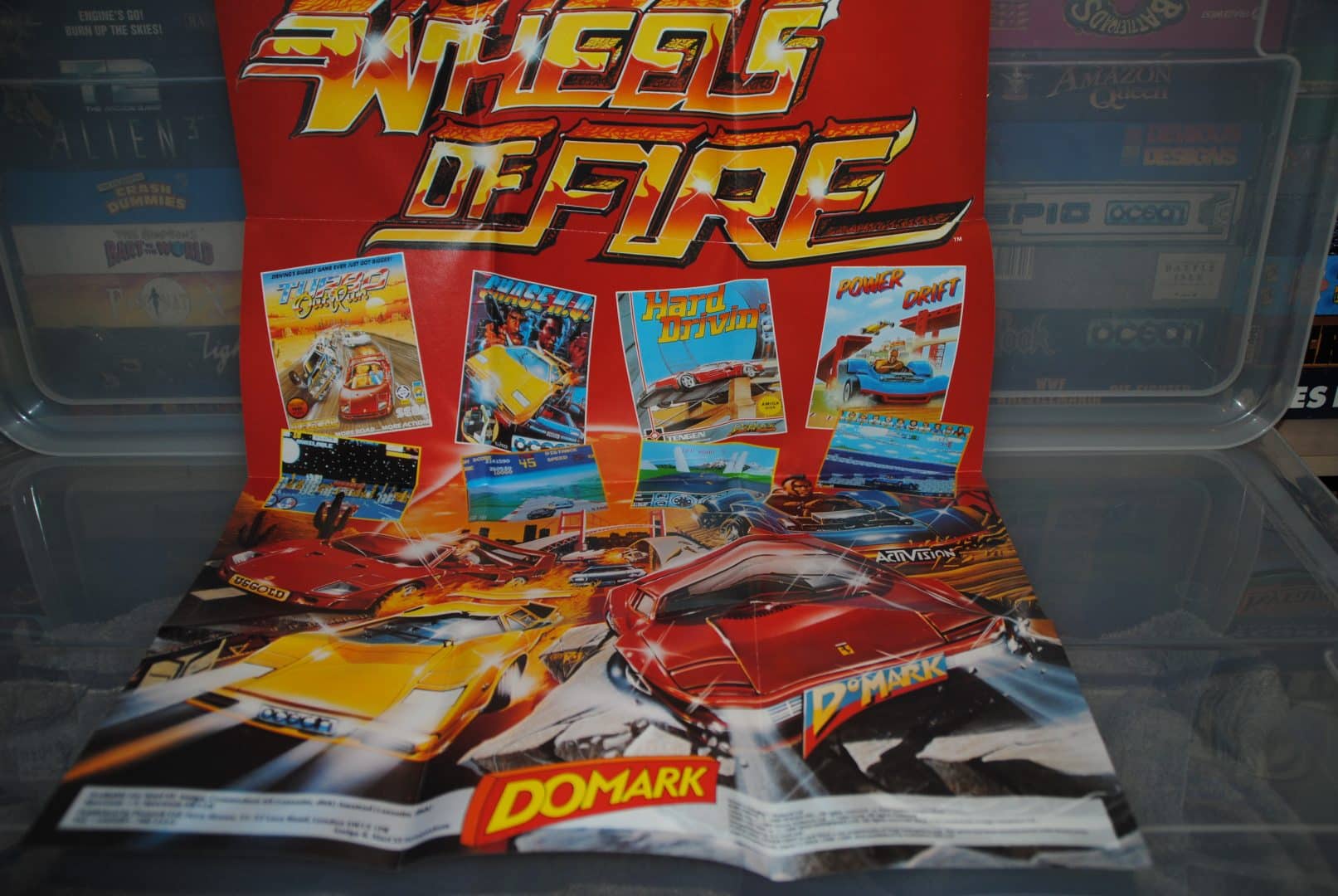 The Wheels Of Fire compilation comes with an extremely big poster, the game comes in a small box so this was never to expected so this was a really nice surprise and best of all is that i never used it so it is in mint condition.

The manual included is also quite good, it is a proper manual and not just some thin paper sheets like most compilations got. 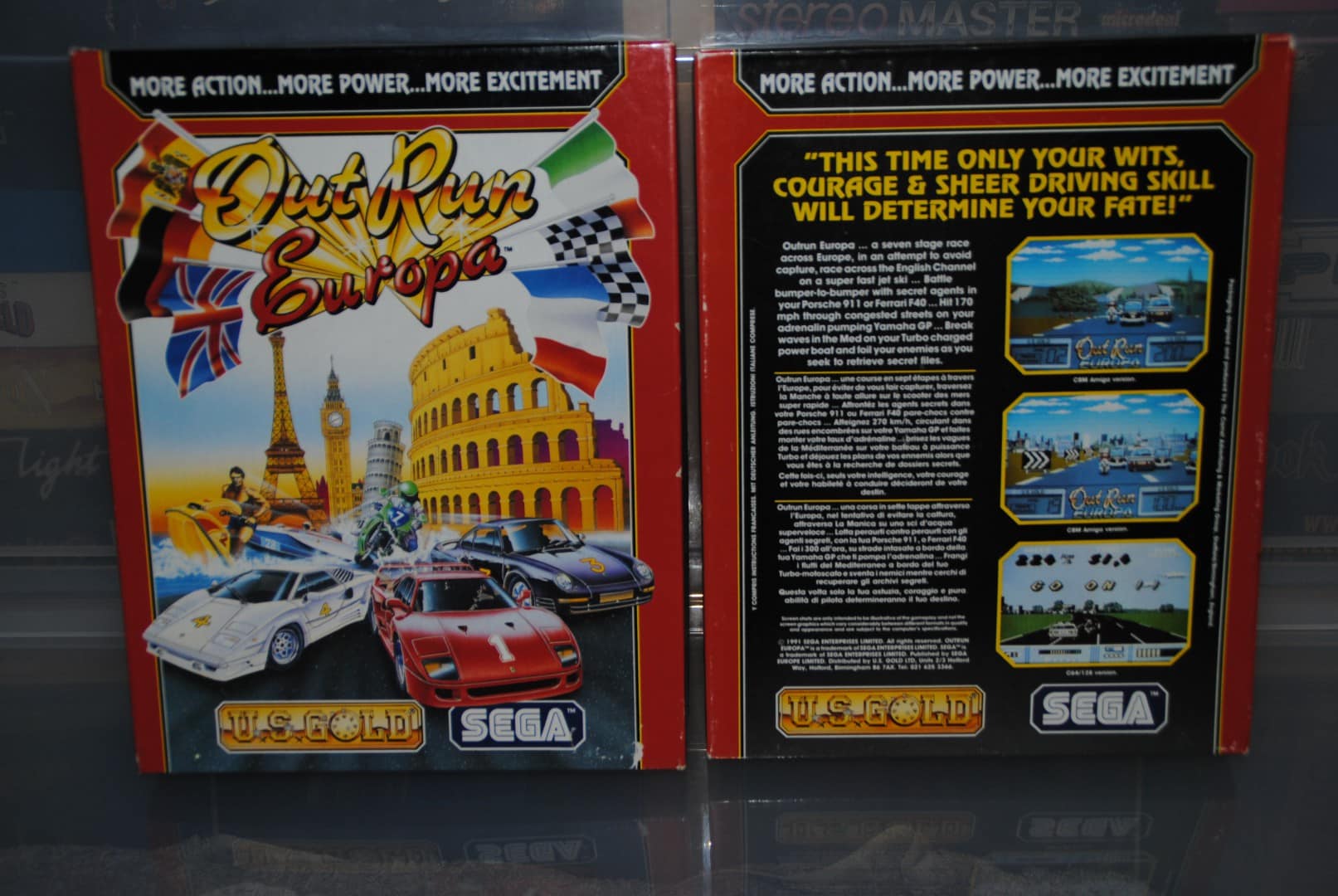 OutRun Europa is the 3rd and last game in the series to reach the Amiga, this game was never released in the Arcades as it was meant to be a Console and home computer exclusive.  The reason for this was because SEGA was doing an Arcade/Coin-Op exclusive called OutRunners, or at least that is what i think.

OutRun Europa was actually canned twice before it got released, the developers decided to release it eventually and that was a good idea too as the game is clearly the best Out Run game on the Amiga even though if it is just a spin-off. 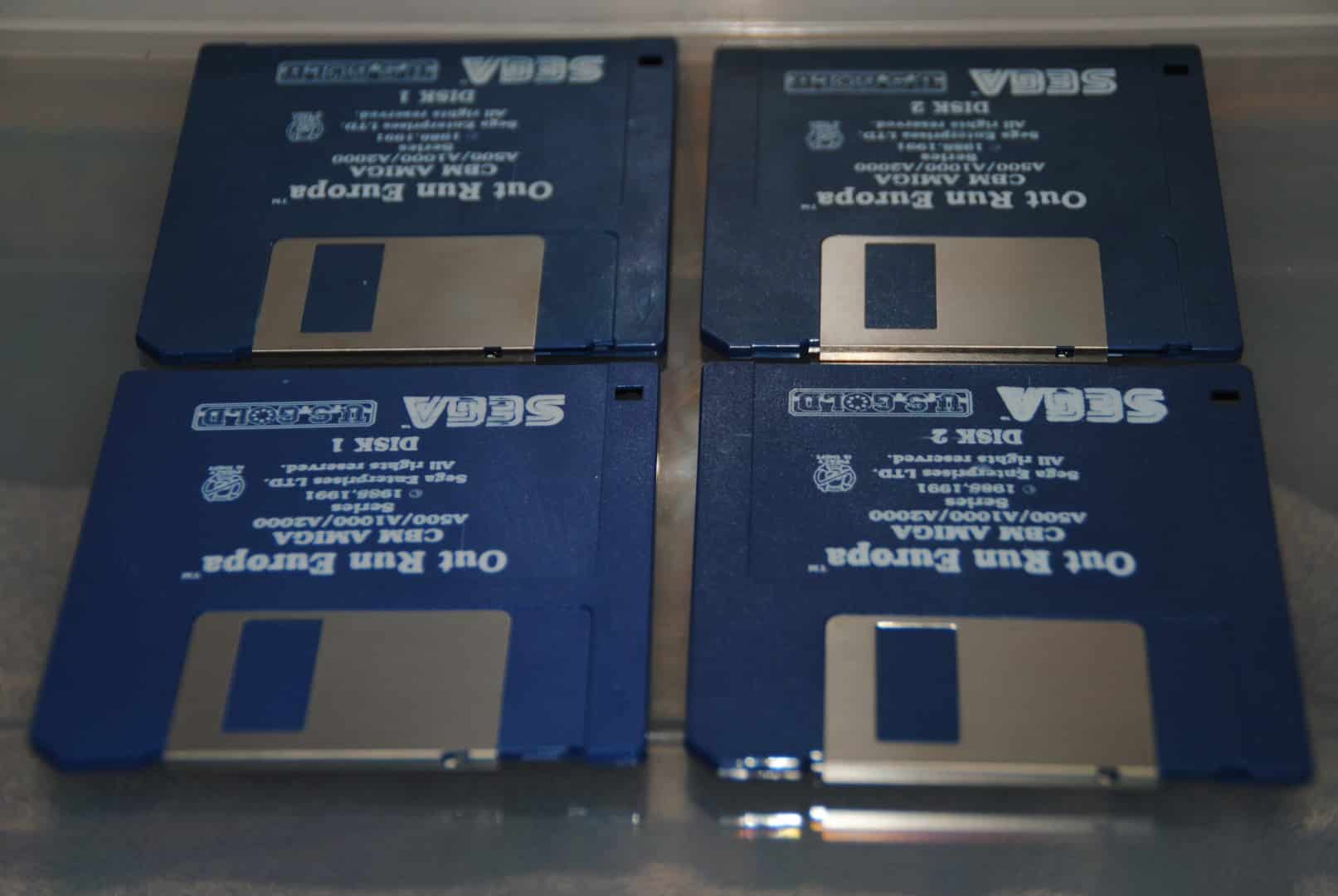 Out Run Europa. 2 versions but sadly only 1 box. – Amiga. 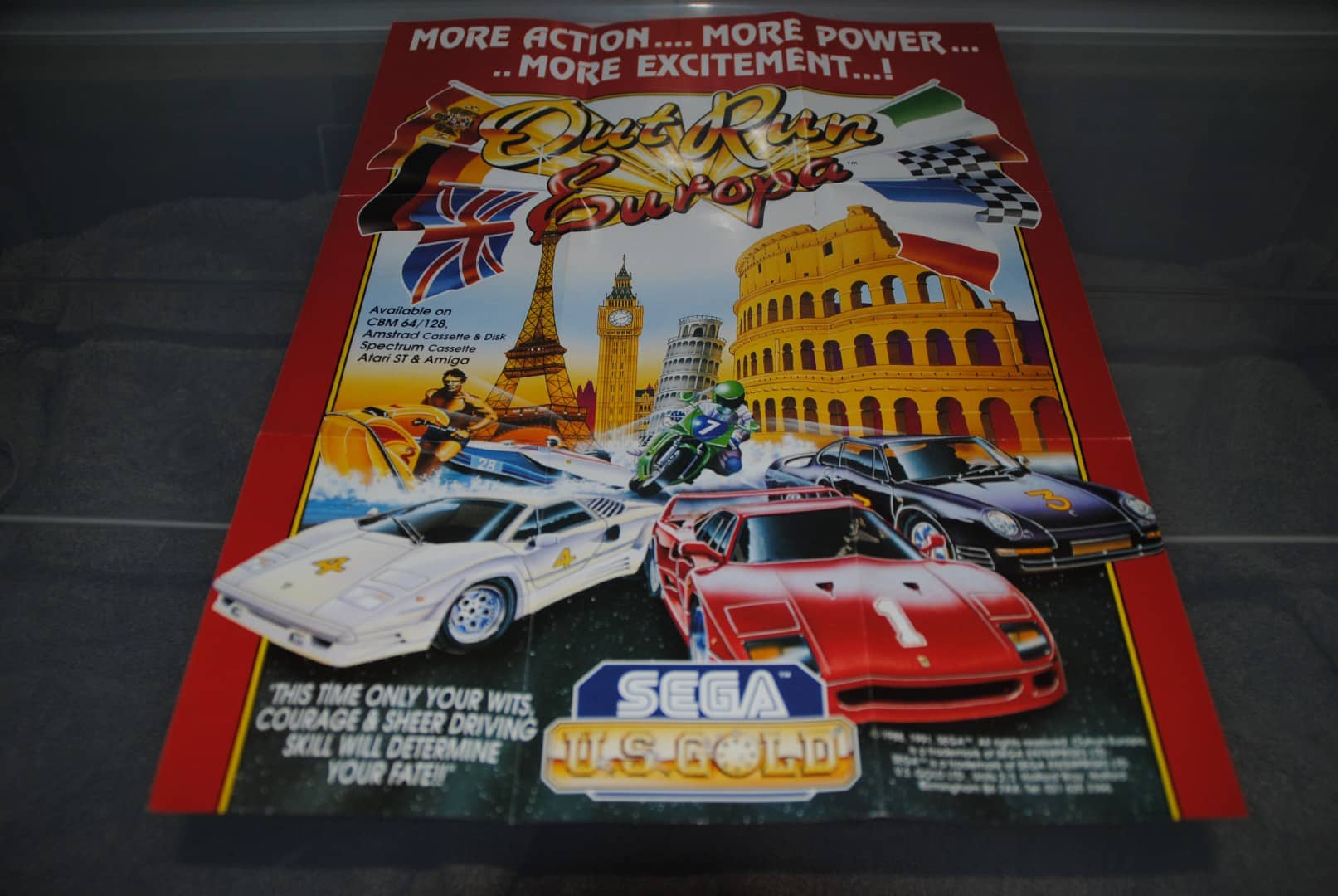 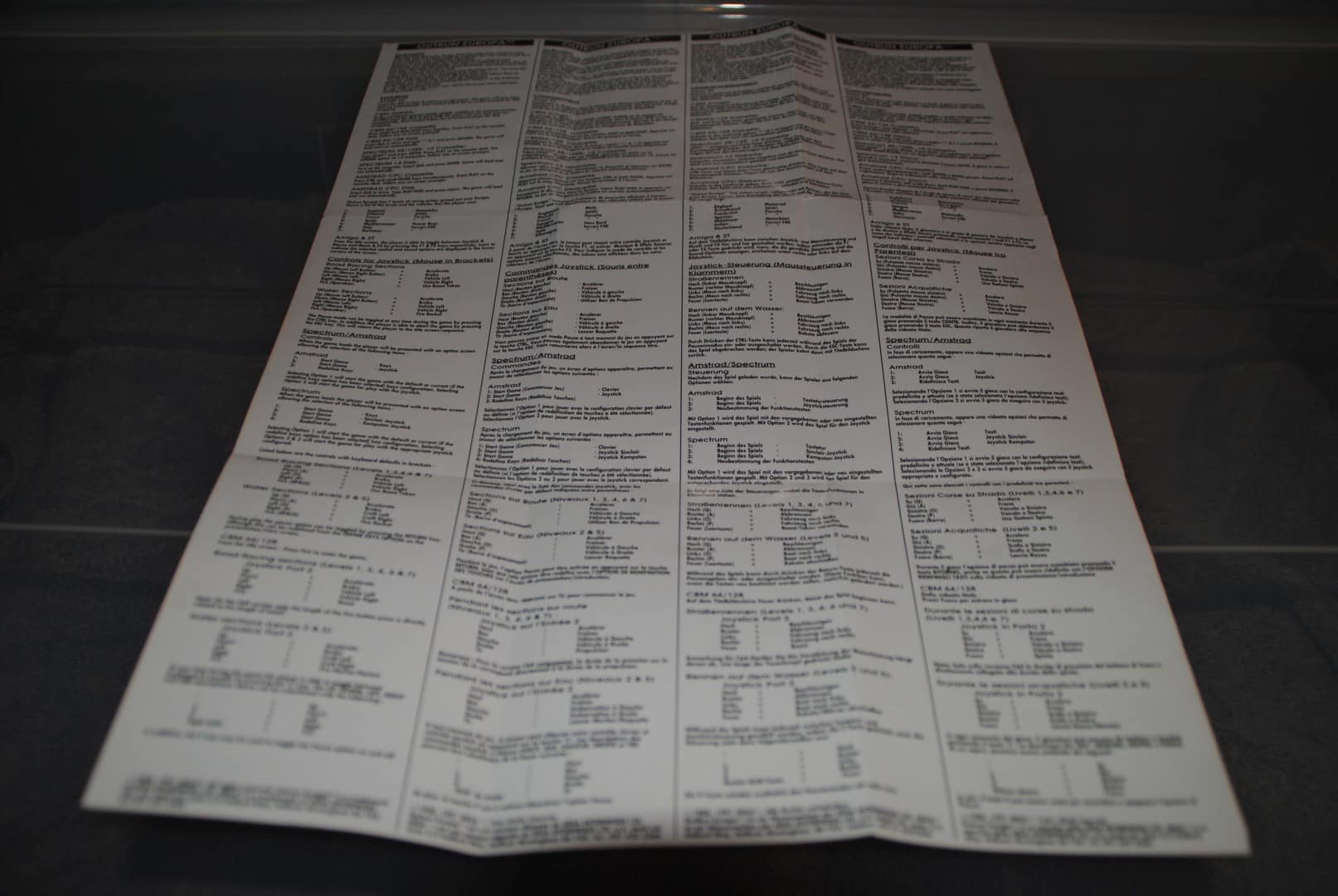 OutRun Europa is another top-notch C64 game too and it is clear that Probe (the developers) spent a lot of time to make both versions as good as possible.

This was the first (and only?) Out Run game to include other driveable vehicles, if you play the game from start to end then you will drive:

And now over to the later games in the franchise. (i will only mention the ones i have even though i do know there are other games on other hardware too). 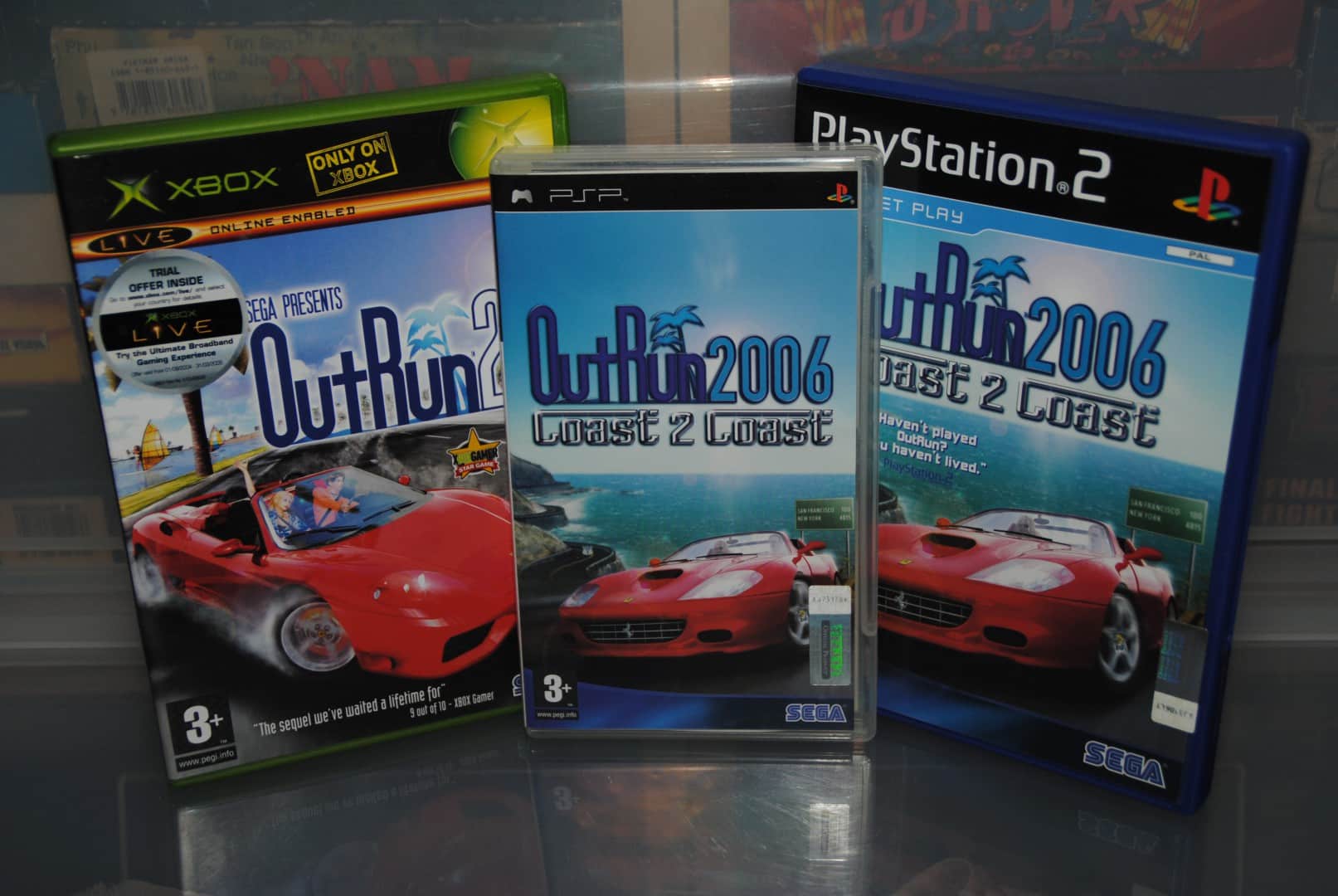 It took Sega over 13 years to come up with another high profile game in the series and just like it did in 1986 with the first Arcade, OutRun 2 took the world by storm again.

I will never forget the first time i saw OutRun 2 in the arcade hall, it was in Liseberg in Gothenburg. I fell in love with it in a matter of seconds, those graphics and the music (also included all the tracks from the first 2 games) and the gameplay style!, it felt perfect!, it was perfect!, IT IS PERFECT!.

I had obviously lived in a cage for a few years as i had not heard about the game before i saw it there, it was just after release but according to many the game had been in the news all over the place for quite some time. 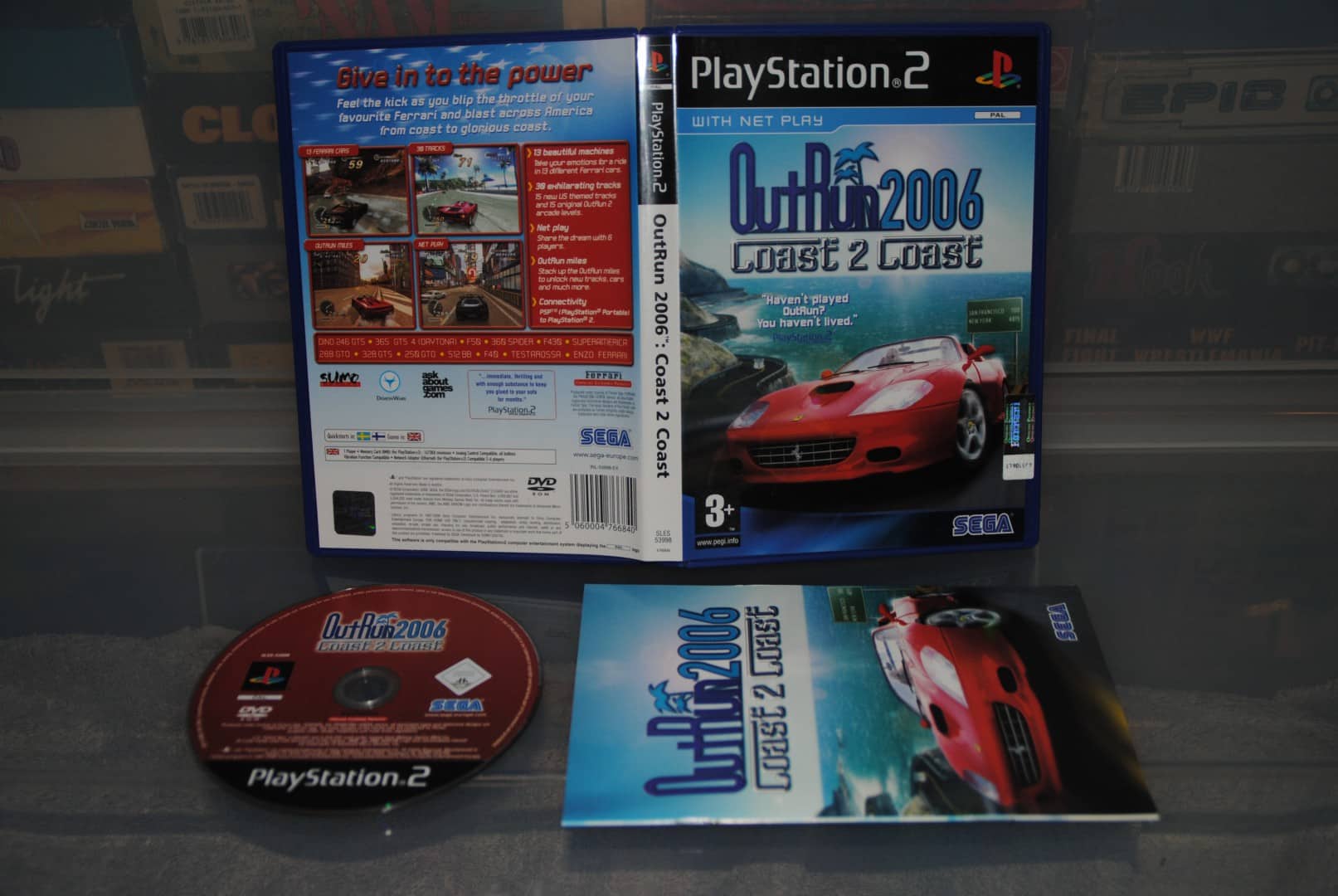 This was a game i was looking forward to, this was to be the first game i bought on release day for the PS2 and it was in 2006, yes i wasn’t all that into the PS2 until  that year, i did play and i did buy games but i was busy with so many other things (like developing stuff for the Amiga and of course gaming on the Amiga etc).

Coast 2 Coast was a game i had been following since the first day it was announced, it felt like ages! and when it was finally released and i got to try it and it was everything i had hoped for, that pure happy place feeling was back, the circle was complete!. 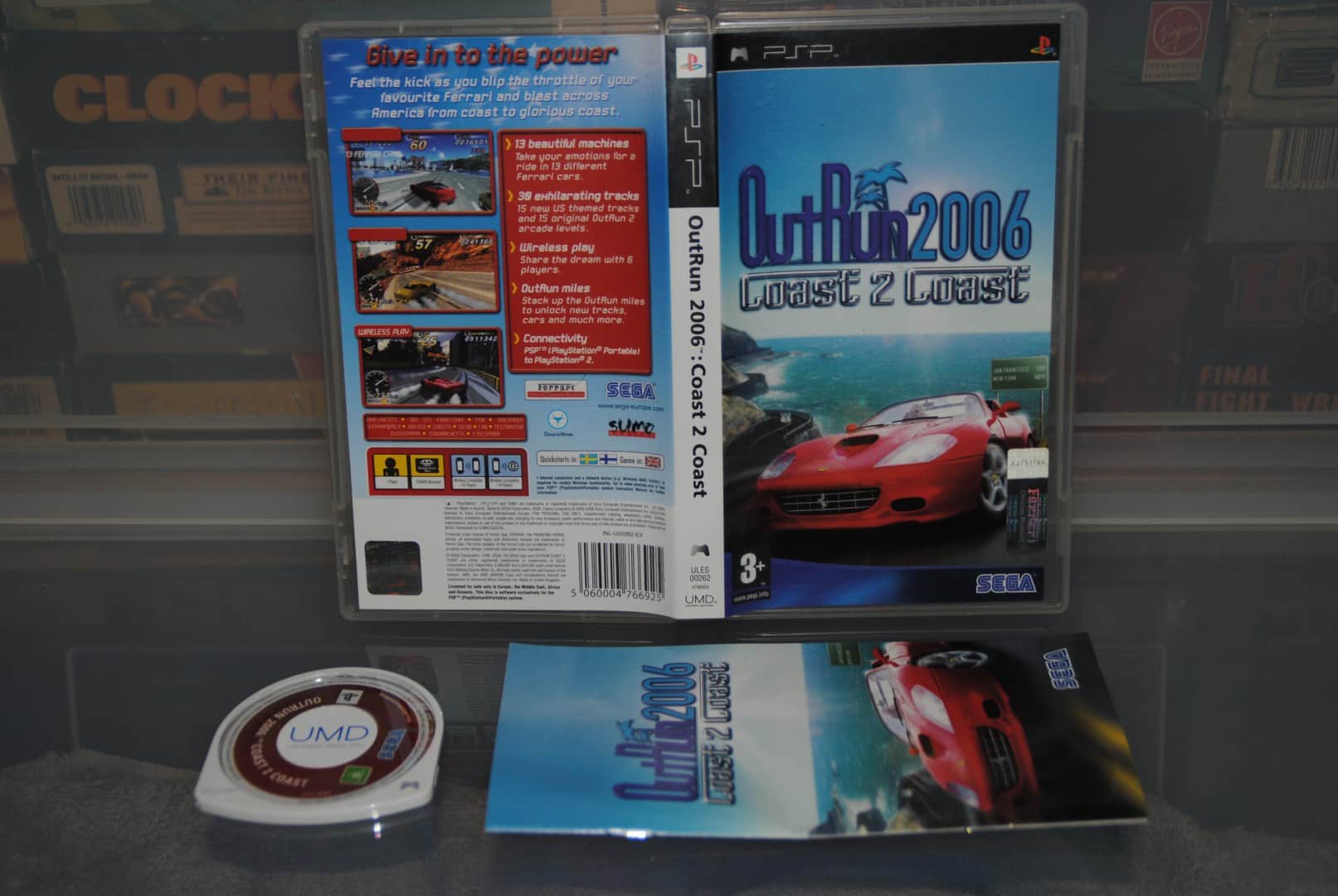 The PSP version was released at the same time as the PS2 version and i had heard so many good things about it that i just had to get that game too, one problem though, i had no Playstation Portable!. OutRun is a system seller for me so naturally, i just had to buy a PSP and the game.  Never regretted that and i have used the PSP quite a bit for other games too.

The PSP version had some exclusive stuff although not all that much there was a crossplay function (by connection to the PS2 version) where you got extras etc. 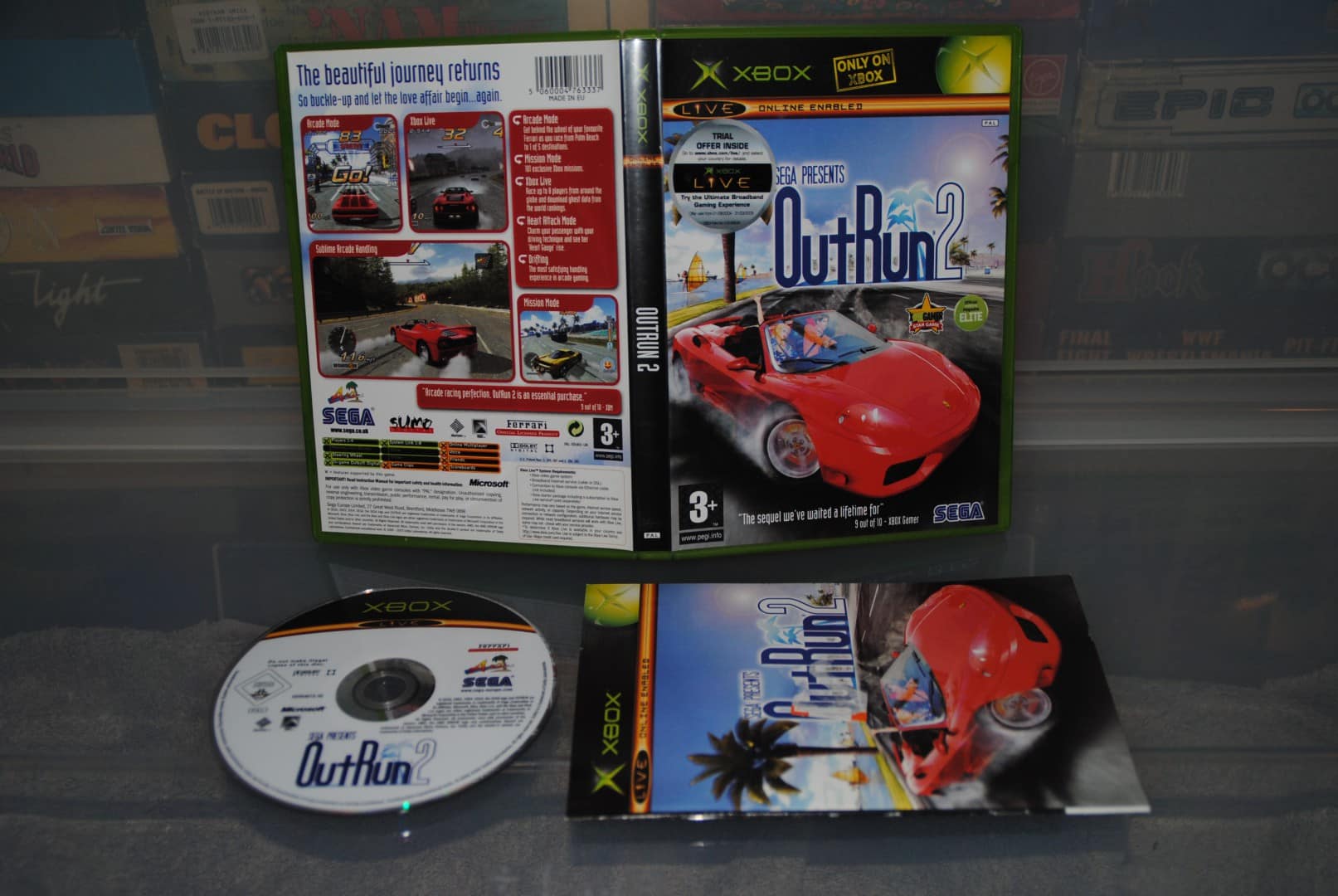 Xbox !, in my collection??? What the hell? , yup i got an Xbox for free some years back (5?) and it came with a gazillion games on an HDD but i never bothered with them as i just wanted one thing and that was OutRun 2, this game is exclusive to the Xbox and no other versions is out there (except for the Arcade version of course).

I was really excited when i went to the shop and bought this game, finally a new OutRun game and while i knew it was quite similar to Coast 2 Coast and its SP version and so on, my expectations were sky high.

Everything about the game was great but the controller ruined it for me, that Xbox controller was not made for normal hands. I had the pleasure to see the game and play it and i did see how similar it was to the PS2/PSP C2C game so i took it not as bad as i could have in regards to the Controller. 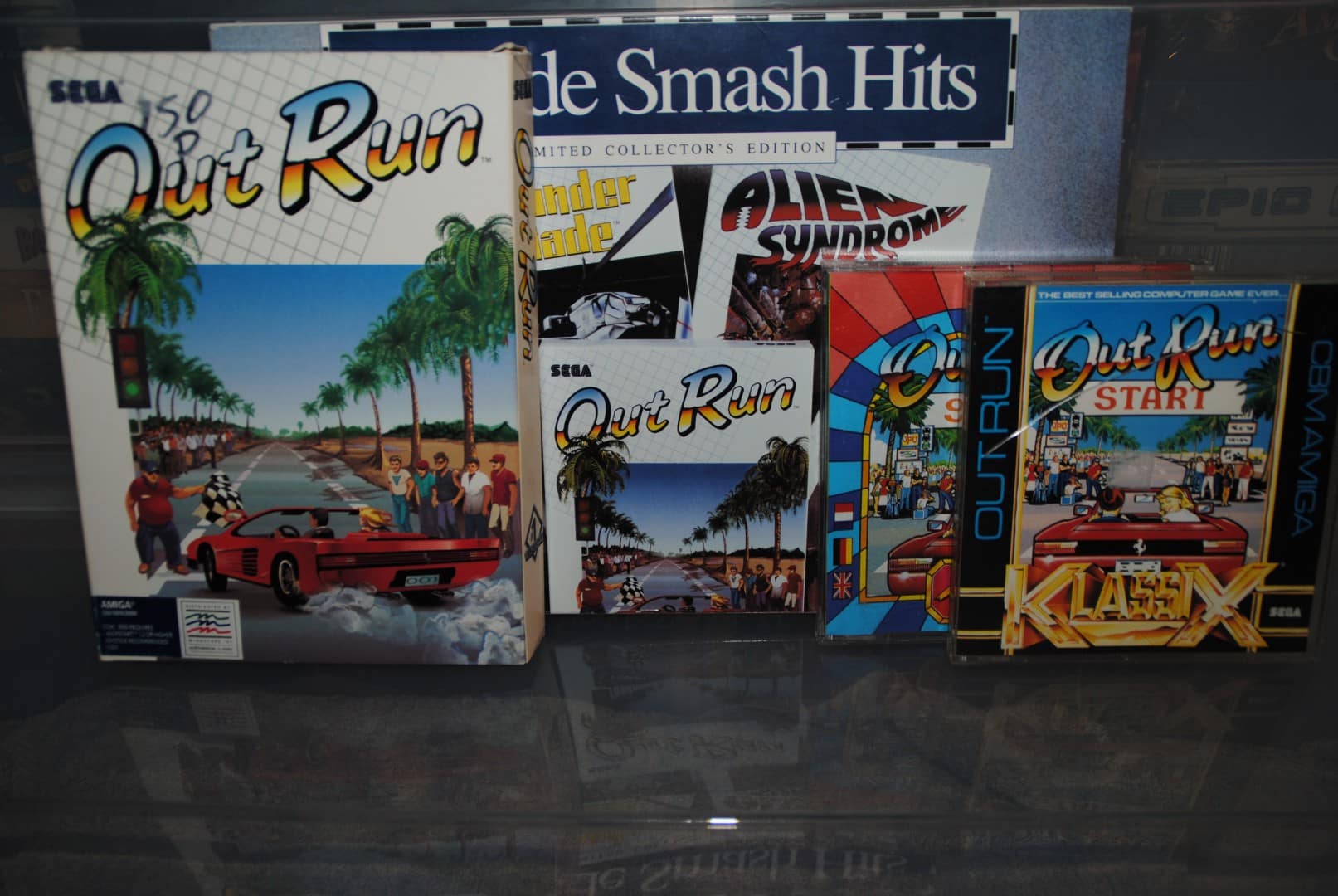 I also got a version of Coast 2 Coast on the PS3, this game was never released in America for some reason, it is called OutRun Online Arcade and it is a great port albeit very cut down and why it was that is beyond me. Coast 2 Coast as a complete game on the PS3 would have been a perfect match even today. 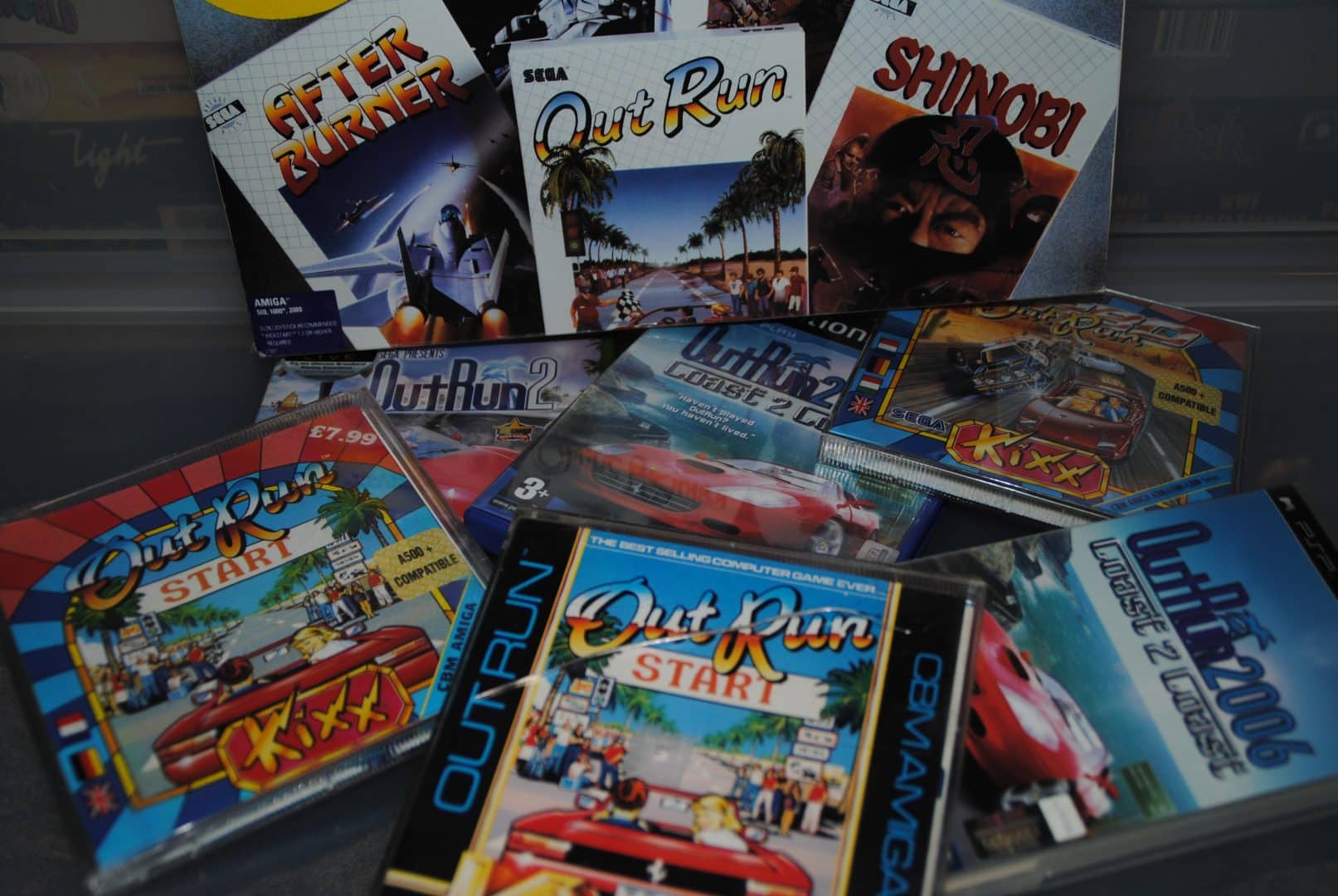 Follow Us... Inspire Us To Get Better... Keep The Flame Alive
Sackboy Gone Sour? – Run Sackboy! Run! D.I.C.E. In The Middle. Liquid On Top – Pinball Games On The Amiga –

7 thoughts on “Crusing With The Top Down, Stereo Turned Up Loud With A Fat Sound – The OutRun Franchise –”