PlayStation VR for me has to be one of the best things that have happened in the Gaming world, I love it to bits and i simply can’t get enough of it but there is one problem with it, VR in general, is really hard to review and talk about and therefore have ended up being something I talk very little about (compared to my ongoing hype everywhere else) here on the blog.

There are loads of fantastic PSVR games out there but the time has come to talk about the latest game from Archiact called EVASION.

You might recall the developer name from other rather good titles like Smashbox Arena, Darknet and Blasters Of The Universe to name a few. 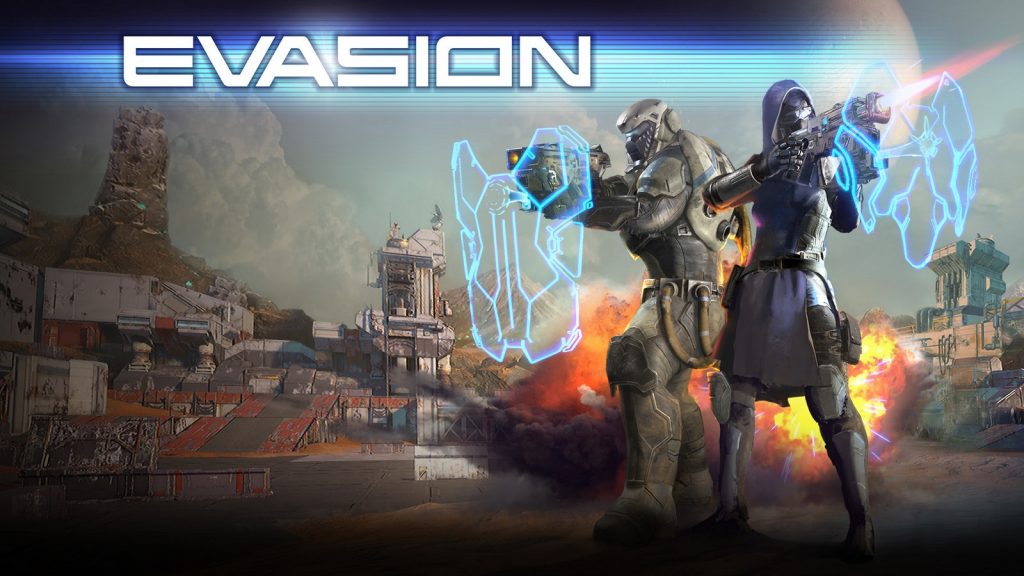 The first thing you will notice with Evasion is that Archiact has taken things much further, everything feels like a proper AAA title in terms of graphics and the overall presentation. Long gone is the simplistic look of Smashbox and the teleportation mode from Pierhead Arcade is stashed under a rock for good (hopefully).

AAA titles for PSVR are not a very common thing sadly as it is simply too expensive for most small teams out there, developing a brand new VR engine is one thing but the other main thing is the time and tech knowledge needed to fulfil the hardware limitations, keep in mind that all VR games have to be a minimum 60 FPS per eye, framerate dips are another thing that ain’t tolerated.

The thing with Evasion is that they have nailed the stuff we loved in their older games but also added things that help to raise it to a new level, the online CO-OP is as streamlined as imaginable, everything in the game is possible to do in CO-OP which also makes the game feel much more complete.

Not everything about Evasion is good though because if you start with the wrong class then you might end up hating the game, the reason for this is because of all four classes are very different to each other and yes, one of them is rather sucky, to be honest.

So, make sure to try all classes before screaming out that the game sucks or whatever. 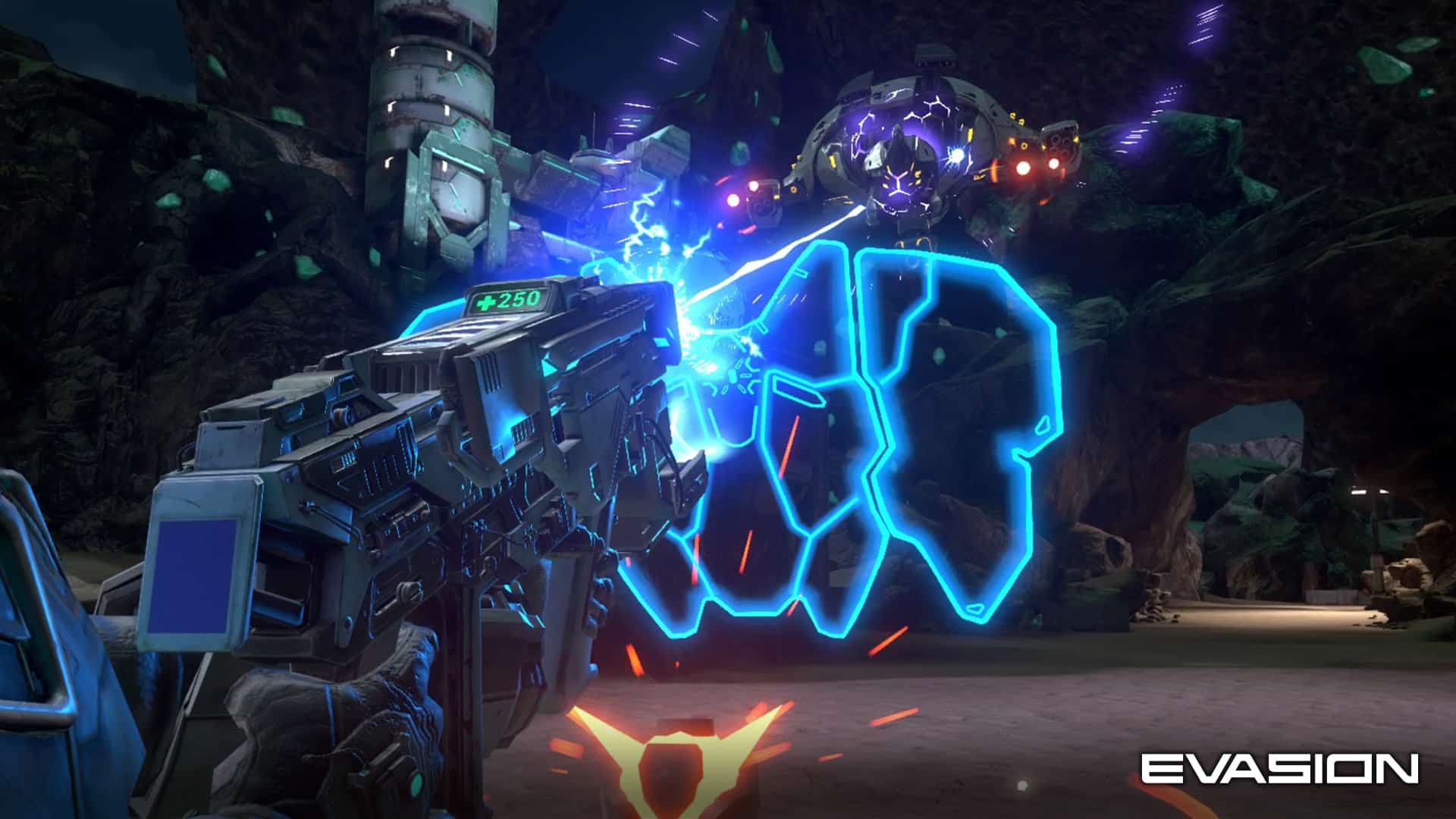 I have completed the whole game in CO-OP now which also includes not only the pretty decent sized Campaign but also the Survival mode, the game ain’t all that hard really but then again we did play on Normal difficulty level but we do plan on playing on a higher difficulty later on if time permits it.

There are huge boss fights that do indeed drag out a bit but nothing that breaks the game or anything.

The variety of enemies is another big plus for this game as unlike many other VR games up to now there are actually quite a few different styled ones here with quite the different A.I. too.

The whole class and weapon system is actually pretty good for most of the time, you also got a shield that is always activated but as soon as you use your Class skill or something called lashing, tethering, healing and so on then the shield will deactivate which means that you are pretty vulnerable when using your “skills”, it actually adds a bit of a tension and helps to keep you away from just using your skills all the time(which makes it much easier in general). 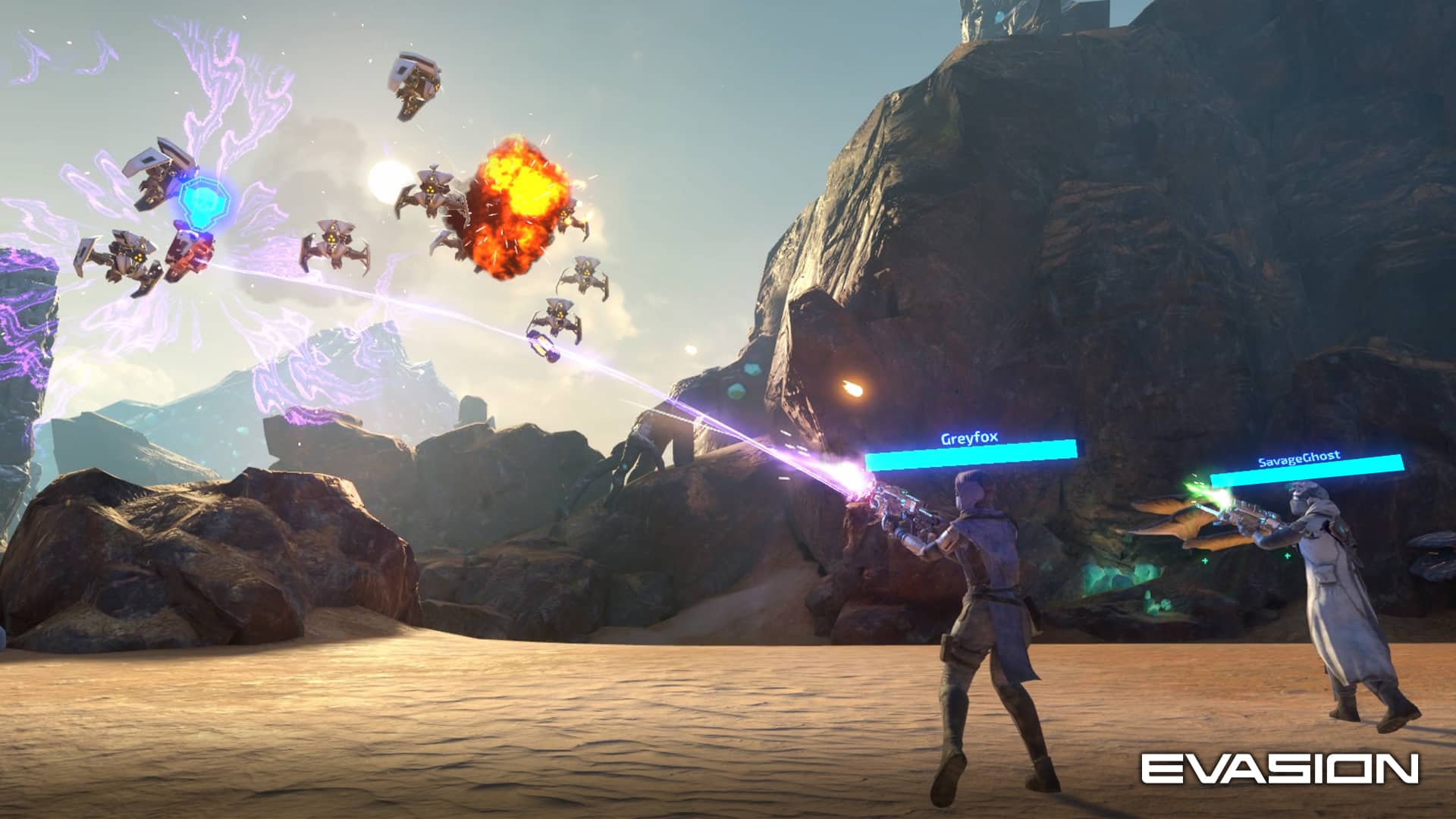 Evasion does fall a bit on its arse with its comedy approach, I mean, yes it can be funny sometimes but most of the time I asked myself if maybe they could have just spared us the effort.

The tear-dripping story nor the detailed backstory from Farpoint is nowhere to be seen in this game and while the graphics, mechanics and some of the shooting does feel familiar it must be said that Evasion never tries to be anything else than a chaotic shooter with lovely graphics. 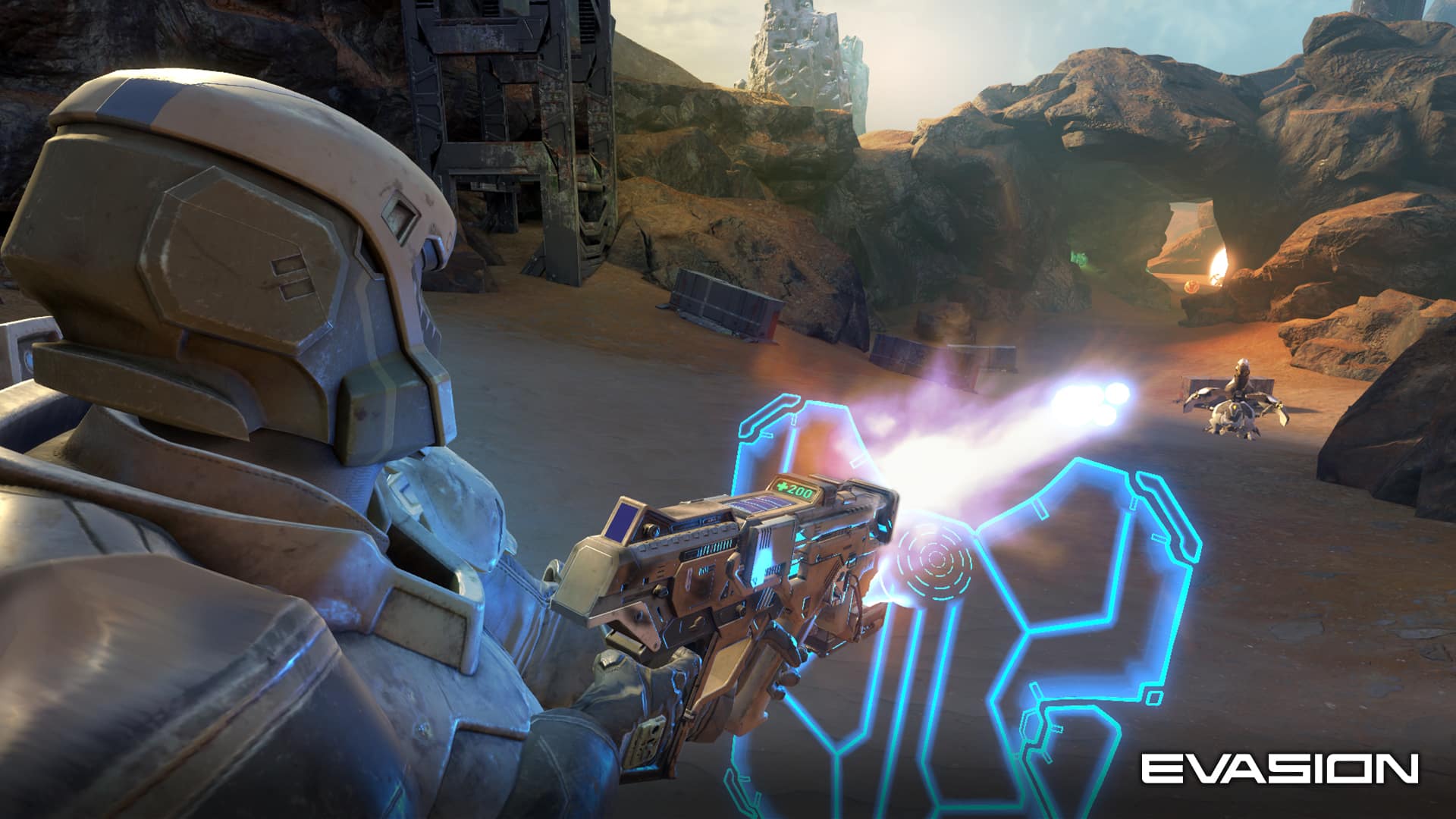 Its all in the details, your weapon is full of small details and like most people that play VR games know by now, it may look dull and flat in pictures and videos but once you put the VR set on then EVERYTHING CHANGES.

All of a sudden everything feels real, incredible and super immersive, well yes this is true for quite a few titles indeed but not everyone, luckily Evasion is one of those good ones that will make you feel like if you are there, especially if you are using the AIM controller, with that said the Dualshock 4 controller ain’t bad either.

The colours, sky, location, as well as the visual effects, got all sorts of small details and while this is still far from the quality of top-notch flat AAA titles this is damned impressive for a PSVR game and just shows how much potential there really lies in the now 2,5-year-old visor and yes, a 6-year-old console. 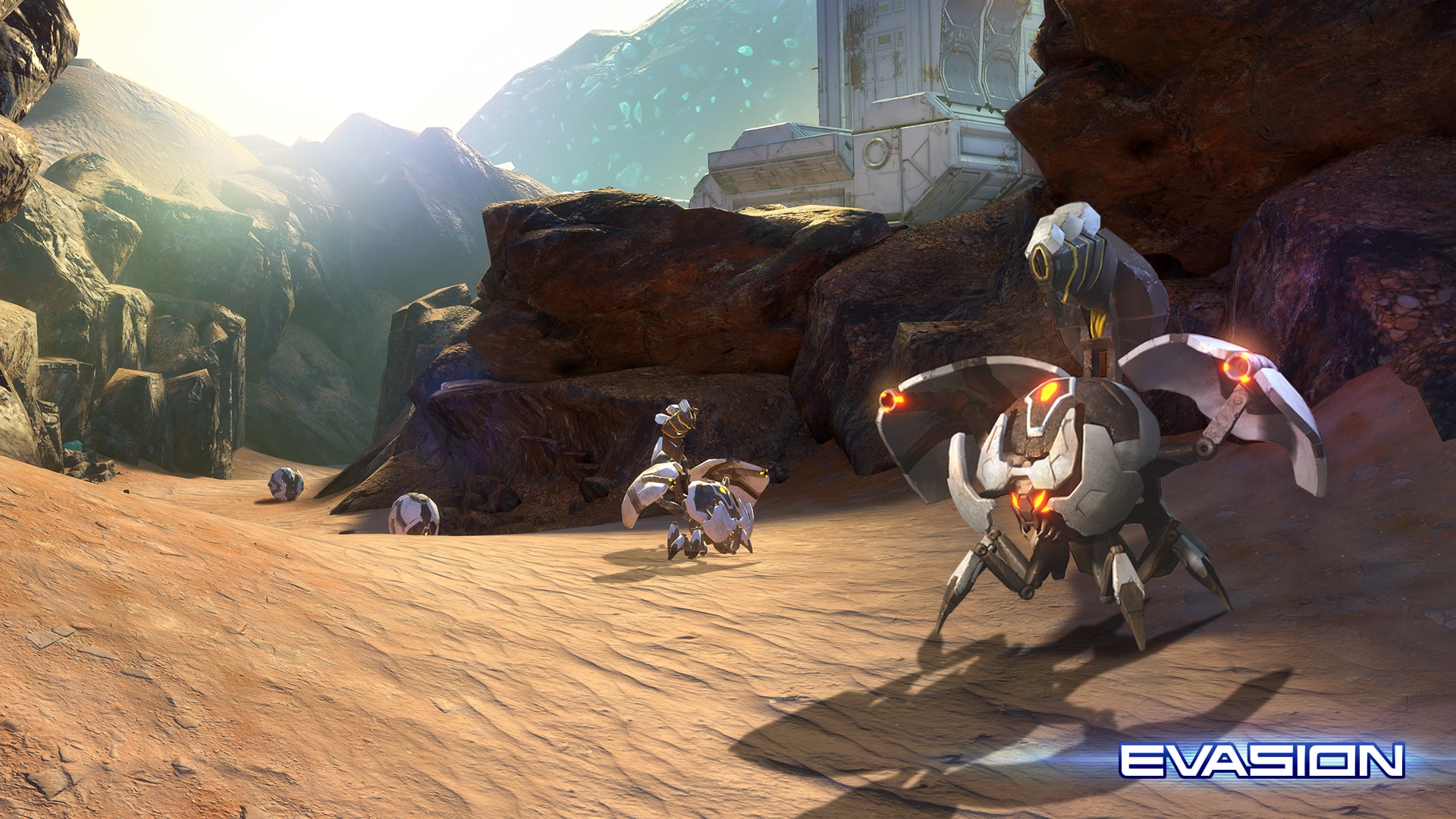 Archiact managed to pull off something totally unexpected with Evasion really, yes I did expect a much better game than their older ones, but I must admit that this was much more than I had ever dreamed about for a game from them. Evasion got its flaws for sure and one of them being a really sucky class, but beyond that and a few minor problems, there ain’t much to complain about really. This is YET another must buy VR title and most definitely one of the best co-op FPS games i have tried in VR.

Where will the road go from here then? If their next game is another huge step up as this one then I have a strong feeling that we are talking about a system seller (in this case a VR system as they are multiplatform developers) here. Archiact got my support for sure, and I just have to say that I hope YOU will take a chance on this too, support the VR developers and the community around it all!