It had to happen right?, my gamer blog has come to a new era and that is books!, Nah i am only joking but i have decided to do an article about this “new’ish” book that i finished reading a couple months back, it’s called THE FUTURE WAS HERE and it’s written by no other than Jimmy Maher http://www.filfre.net/about-me/ and it is a book about The first few and most dominant times of the Commodore Amiga. 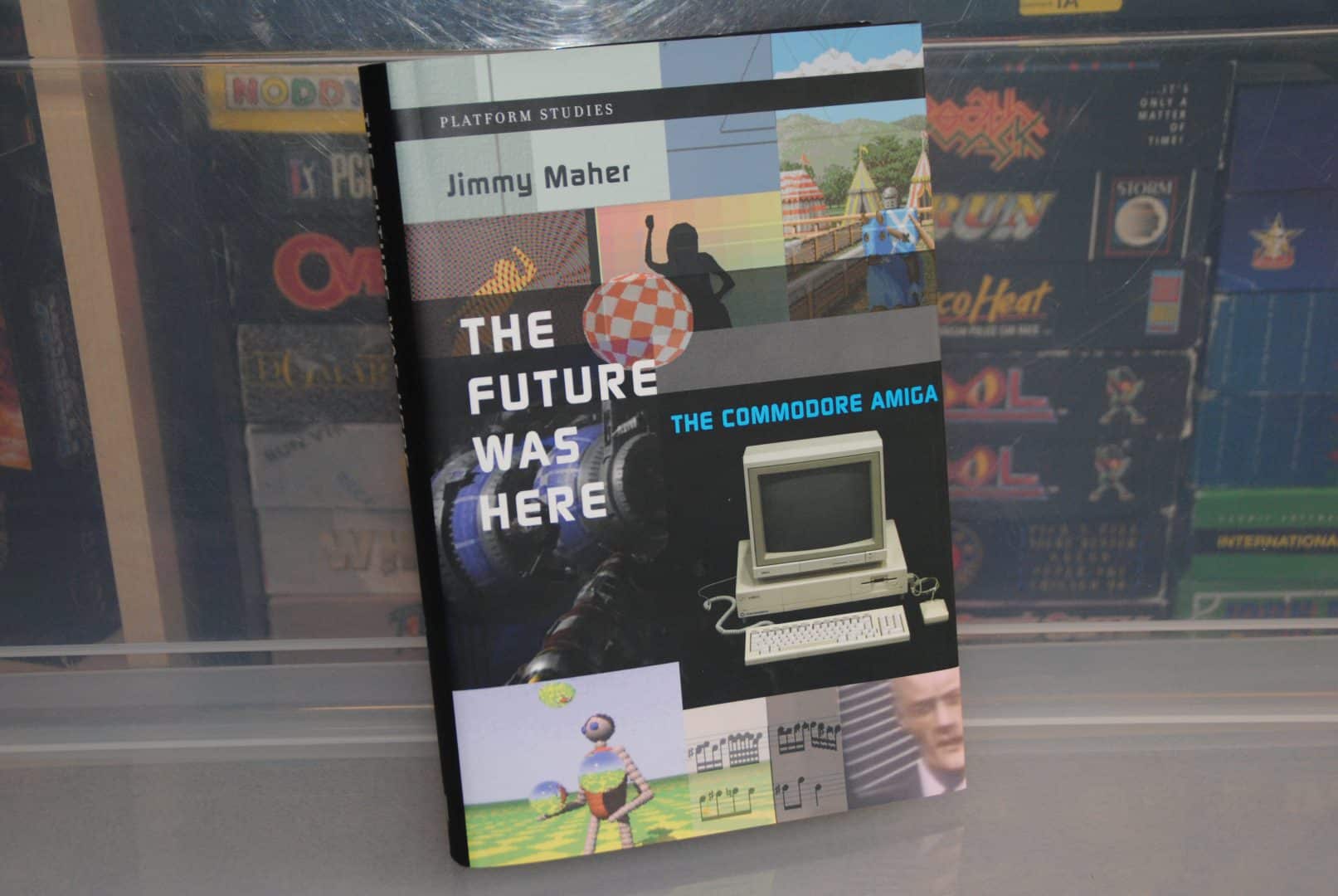 The book has gone deep into the technical software stuff like the famous Boing demo which was one of the most impressive things and one of the things that sold a shit load of Amiga computers to both developers and customers. 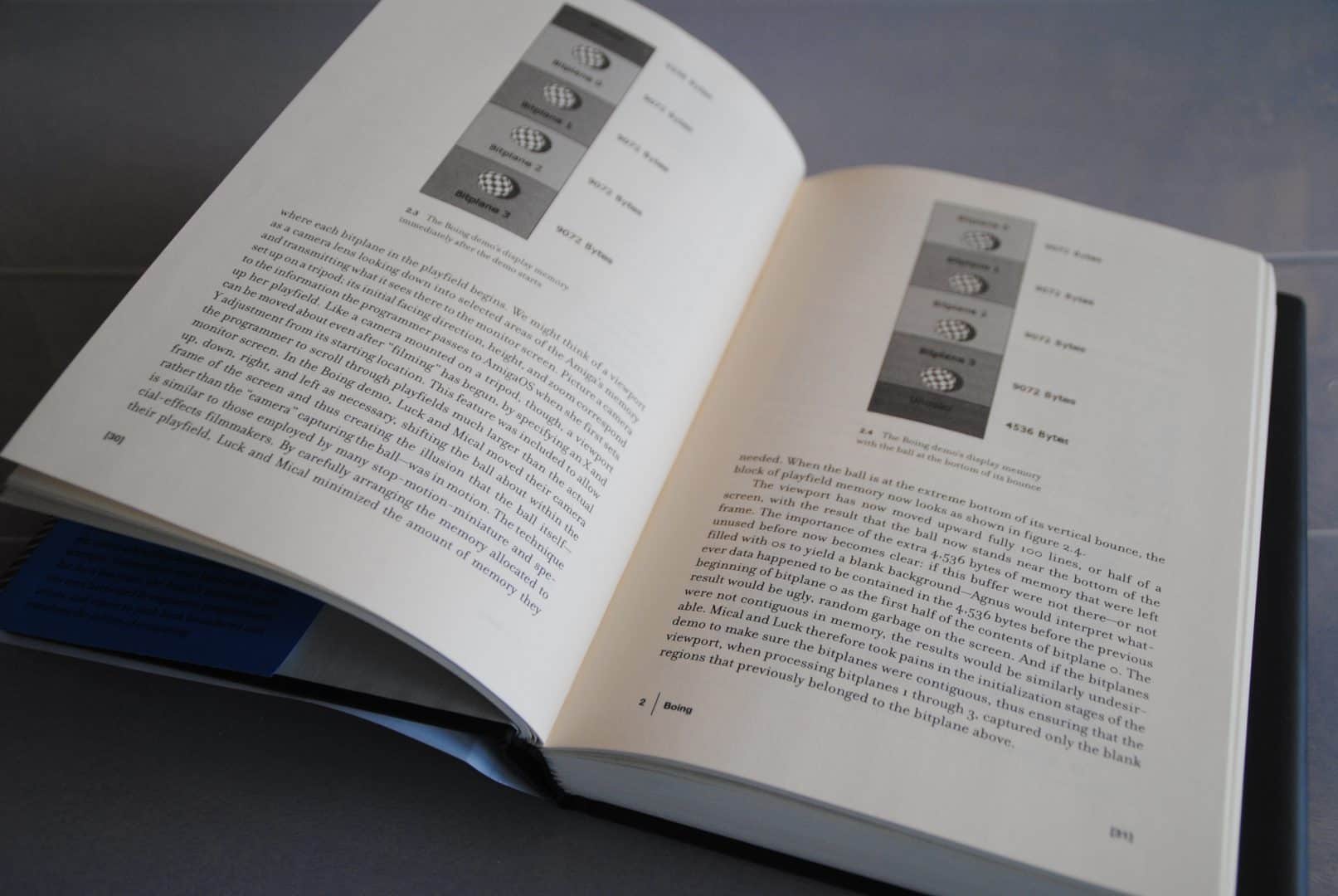 A huge part of the book is about software like Deluxe Paint and it covers the series all the way up to the last one in the mid 90s, loads of details that most people didn’t know about and lots of comparisment to what was available on other platforms at the same time and it’s safe to say that the Amiga obliterated just about everything else in its path for a whole decade and it was used in game console development for consoles like the Sega Saturn, Playstation, Playstation 2 (200/1) and the Dreamcast (2000) which was an amazing feat as the Amiga was totally out of the loop as the market dried up after the demise of Commodore back in 1994. 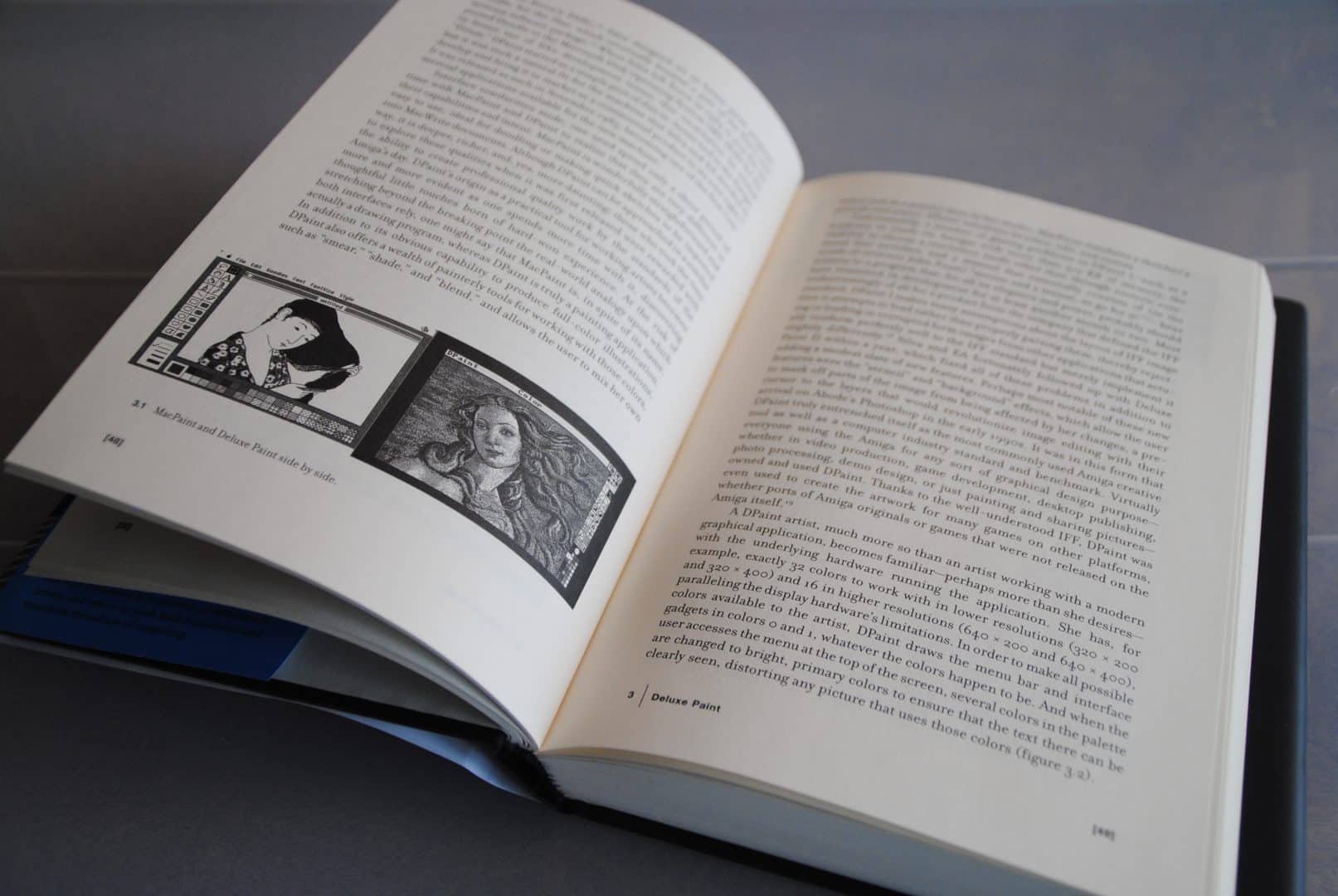 The book also goes deep into the power of the graphics chipset(s) of the Amiga and explains a lot about and how HAM modes etc worked and how it was possible to achieve 4096 colors on the first chipsets (1985 and up) and 16million colors on the AGA chipset which came 7 years later in 1992. A very interesting read actually and it revealed a few things i didn’t know. 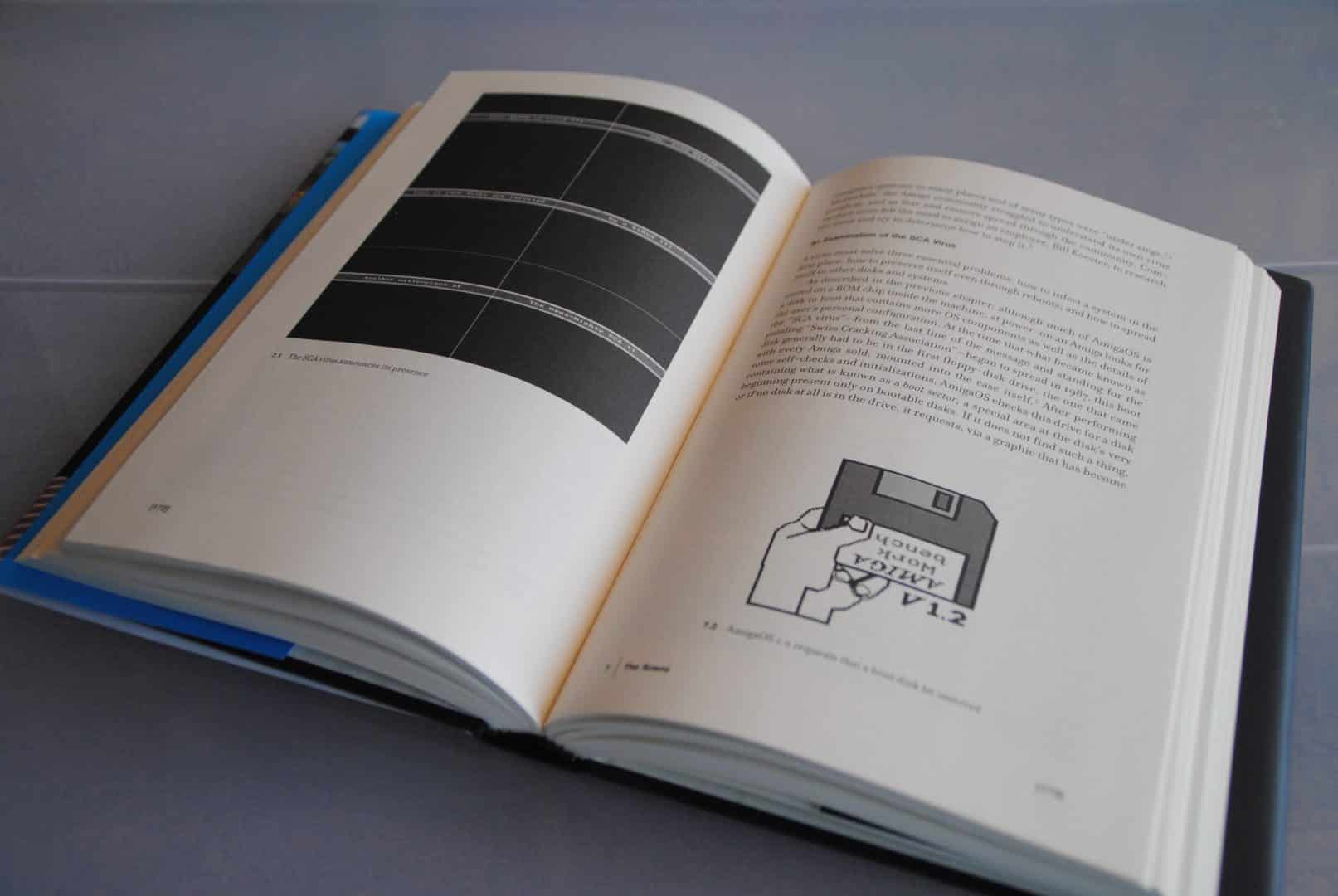 The book also covers the Piracy and cracking scene and explains all about how it went from unserious to serious over the years, it also explained the details about the very first Amiga virus and where it came from and why. 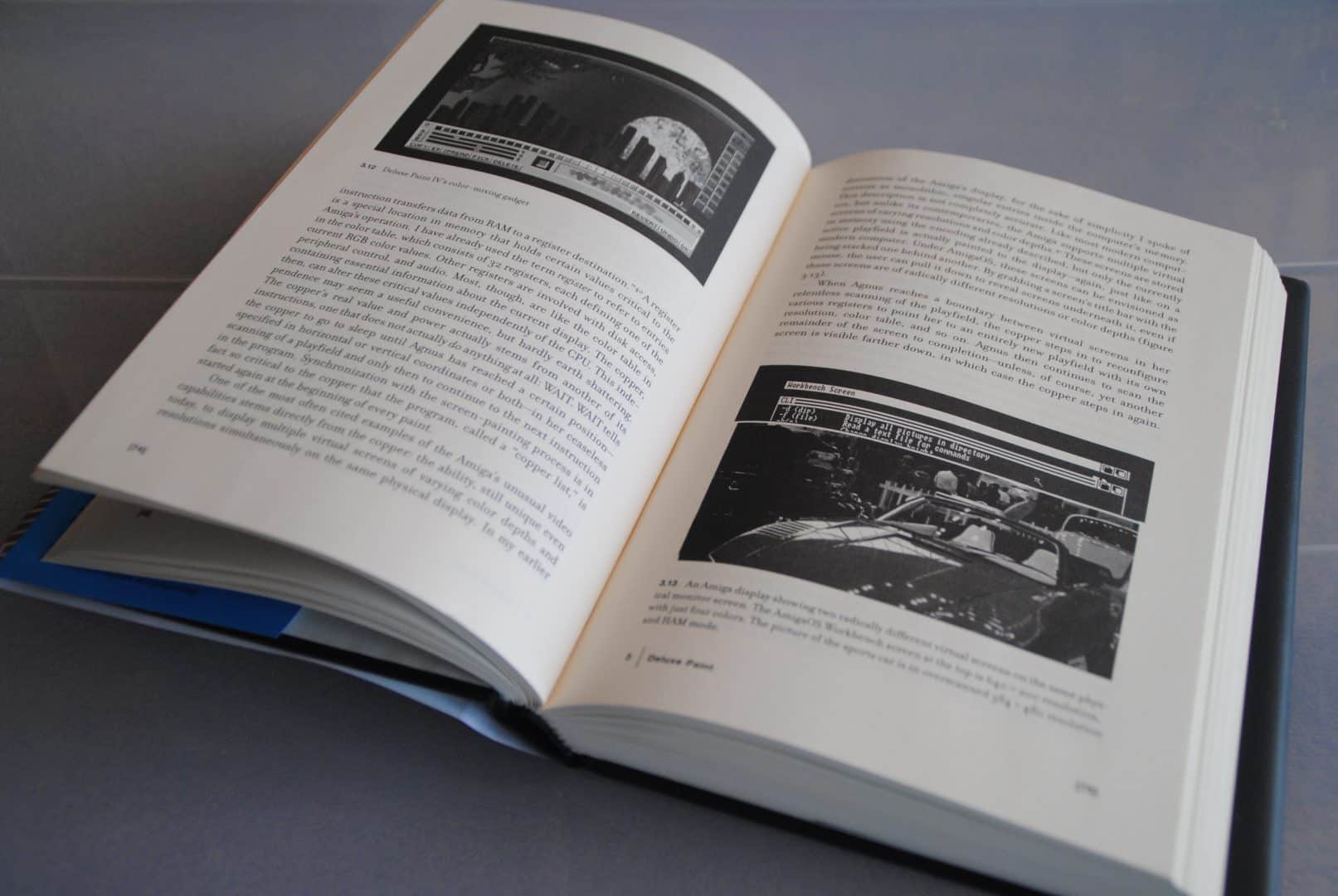 From piracy and virus’s to the serious scene, came THE DEMOSCENE, this is where the guys with talent went after creating small signature text/intro’s for the game cracks , these Crack-intros got so damn popular that eventually, they decided to start something called the demo scene where people competed with code/music and design skills instead of cracking games and such and as many might not know… the demoscene on the Amiga (and many other formats like the spectrum and c64 etc) is very alive and kicking even today while the cracker scene is gone even when new games come out for them (yes, there is new games being released on these machines still…). 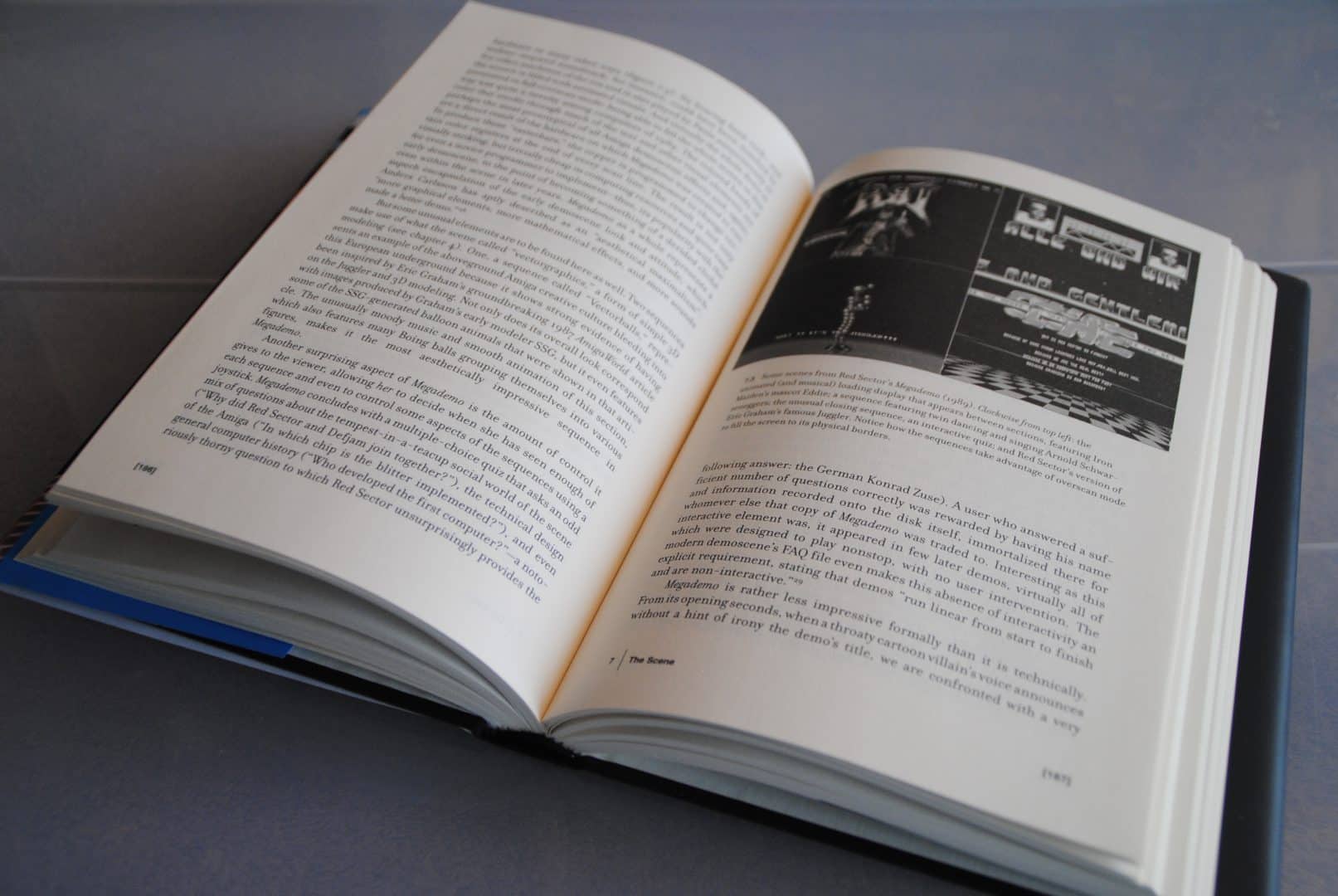 3 of the most known scene demos from the early days of the Amiga Demoscene is covered in the book, demos like RED SECTOR MEGADEMO and Spaceballs ‘ State of the art’ and i think it was very cool of Jimmy to put these things into his book although i wish he’d put in some comments and details about the later demos and achievements where the old Amiga’s still beat and / or could compete with today’s PC’s. 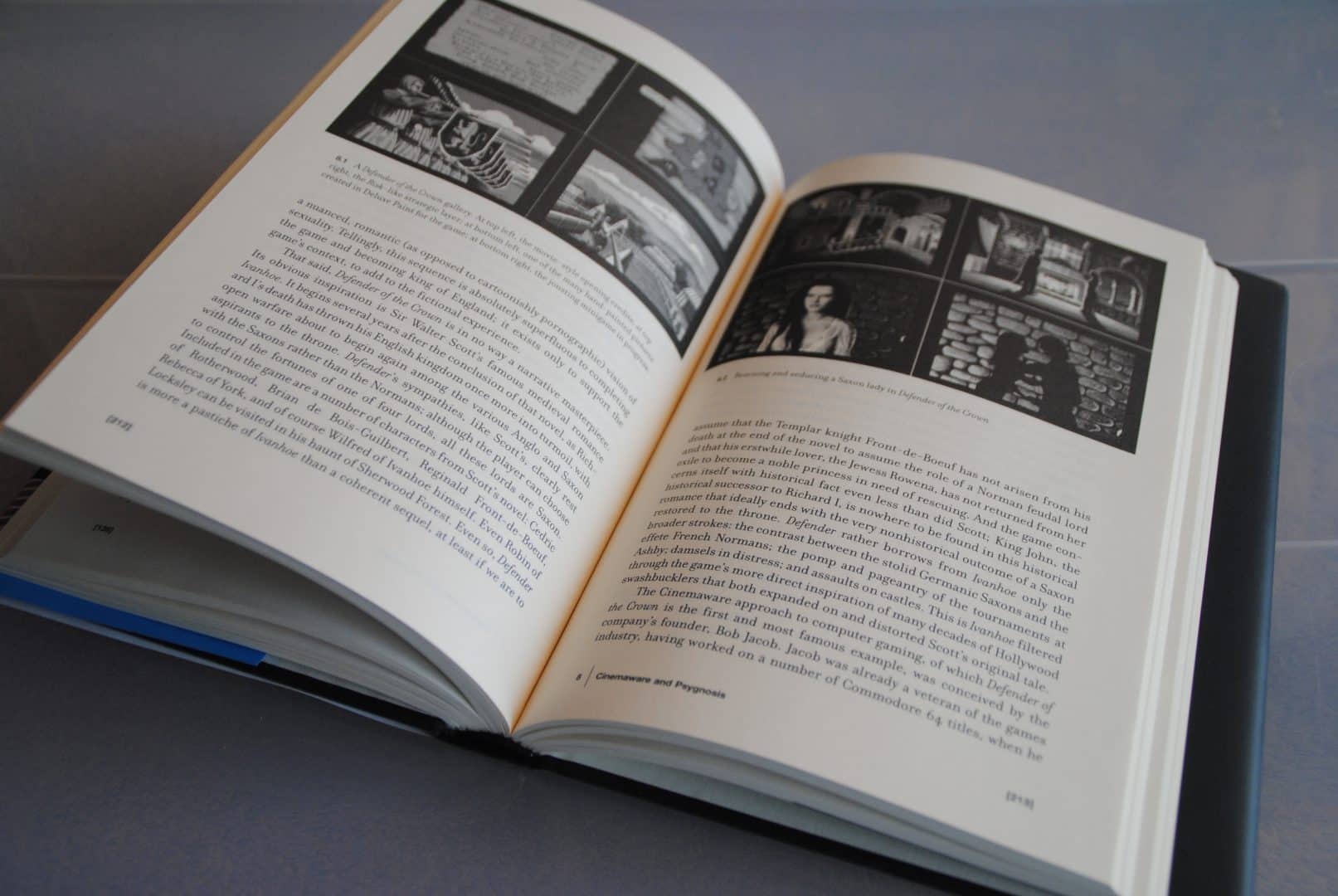 Games from Cinemaware and Psygnosis is also covered in the book and of course games like Defenders Of The Crown is mentioned and yet again it explained how it all was possible and what those games did to the whole gamer world.

Btw i should mention that Defender Of The Crown was the reason i bought an Amiga and i can totally relate to why exactly this game was covered. 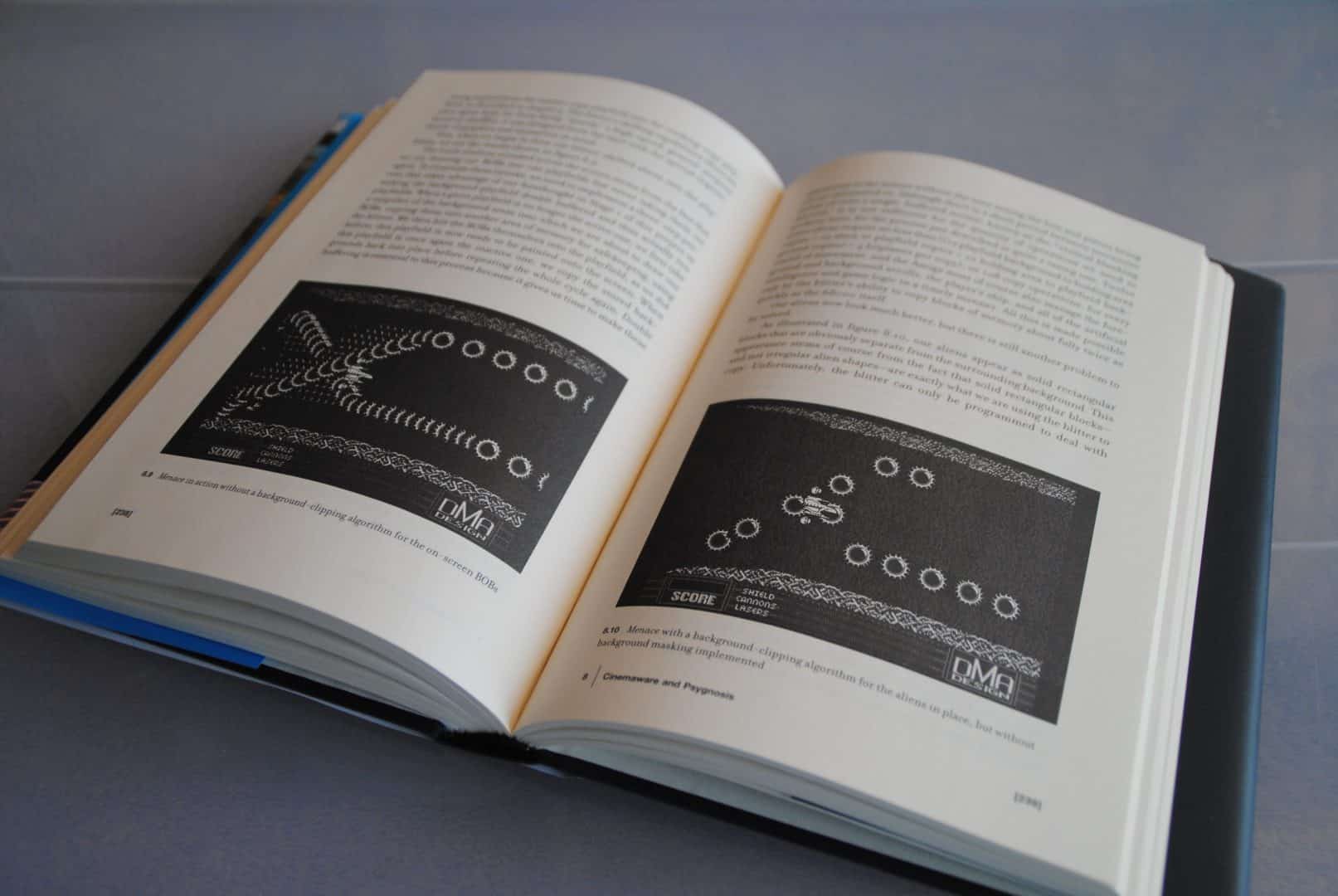 Psygnosis (these days they’re known as Sony’s Studio Liverpool)was an Amiga publisher/developer whom eventually got the reputation for being the number 1 of all Publishers around the world and how their graphics/Sound/Playability and games was way ahead of everyone else and that was true up till around 1993 when all of a sudden most games they released was utter shite (Cliffhanger?????? The last Action Hero??? WTF!), The game the book goes deep into is Menace by DMA Designs which was an incredible advanced game for it’s time.

Psygnosis managed to save themselves from a total disaster by publishing some awesome games after those extremely bad games (Cliffhanger, The Last Action Hero etc) with killer games like Wiz’n Liz (Bizzare Creations) ,Brian The Lion (Reflections) ,The Misadventures Of Flink (in-house by the games behind Lionheart etc) and Lemmings 3 (DMA Designs aka Rockstar North!).. 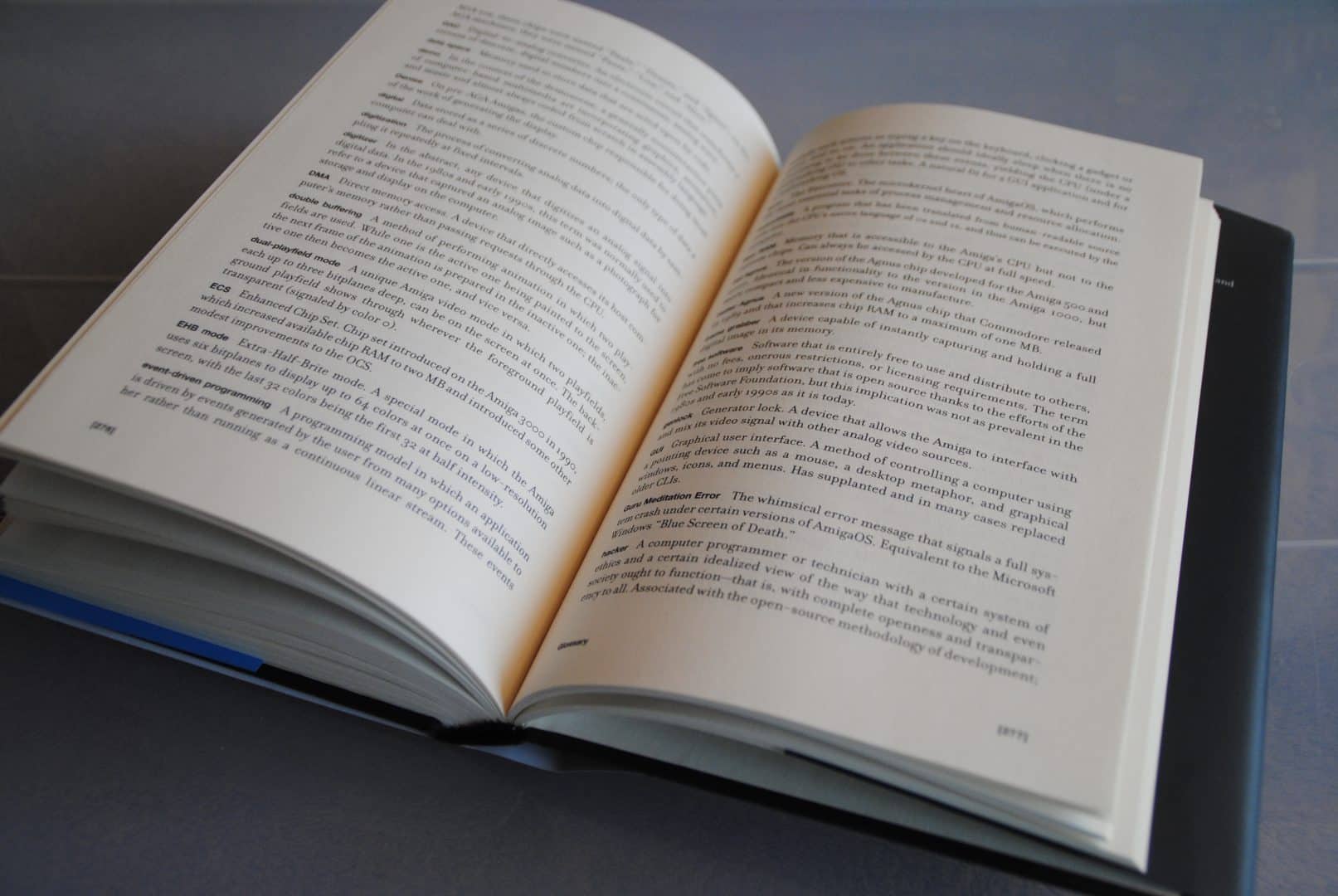 The book also has a full “dictionary” about all Amiga chips, names and abbreviations, acronyms and so on and most of them is totally common in Amiga circles though there are some Amiga.inc and ex.gateway/Viscorp people that should have a closer look at these pages….. as those Q and A sessions on various forums over the last 10-15 years clearly shows that the owners of the actual IP have next to no knowledge about these things while they claim differently… 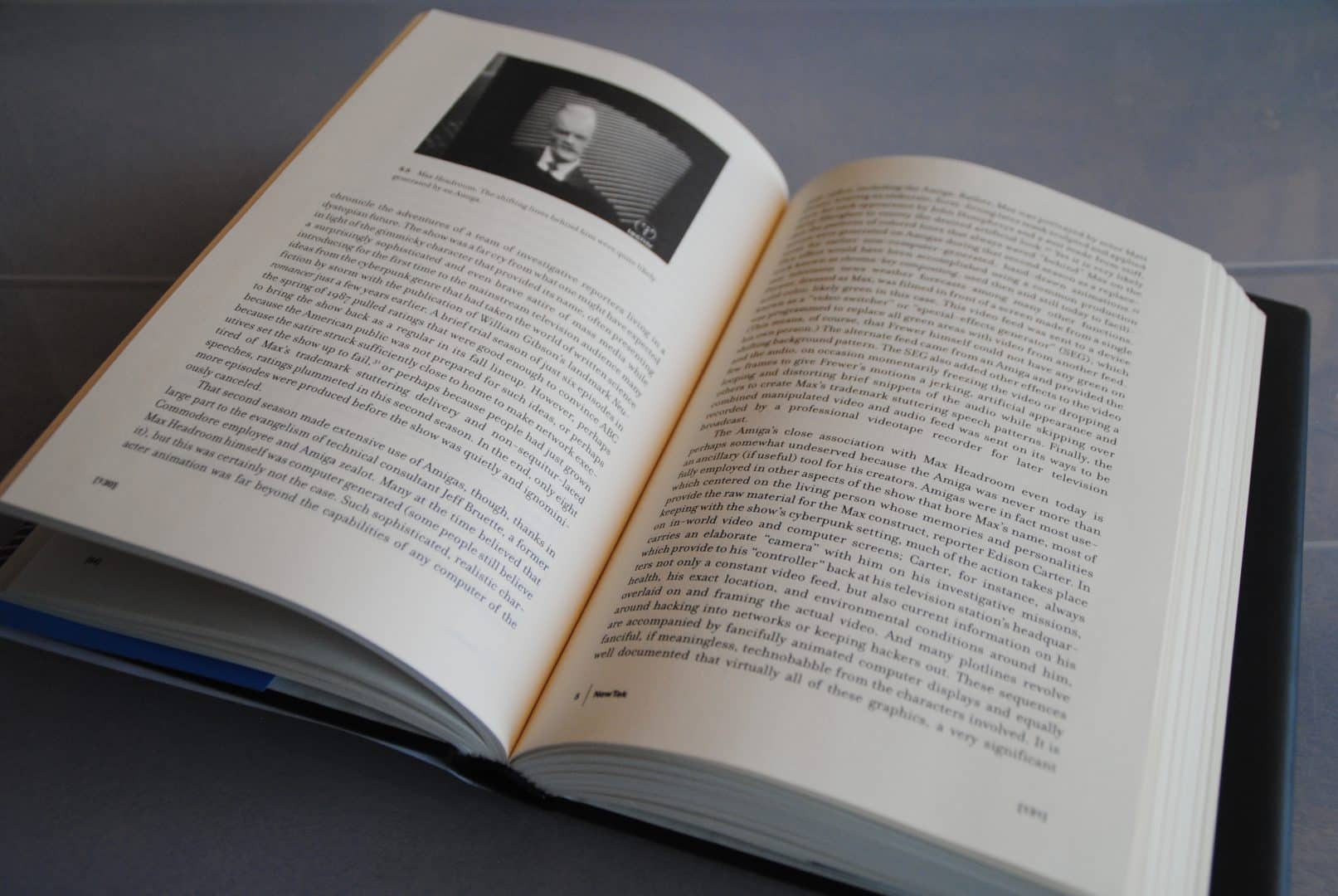 AAAAAAAH, Max Headroom..funnily enough the book fails to actually confirm that it was an Amiga that produced/played that background while after a few minutes i managed to find magazines (i cheated as i knew approximately when the article was written and which magazine) in my house confirming that it was an Amiga with a genlock with animated and pre-rendered graphics and stuff on top of it.

I also managed to find info via amiga.org too. 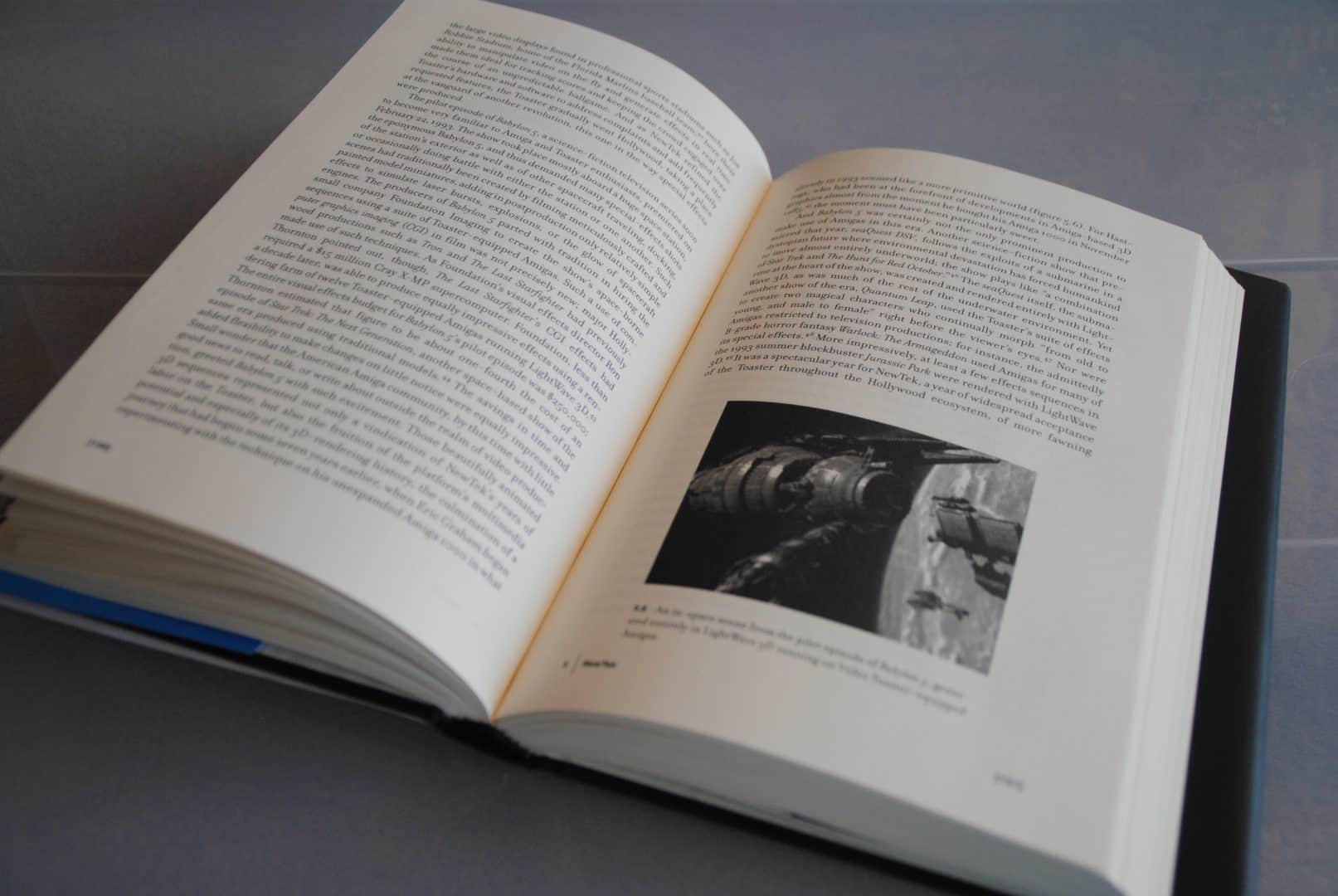 Another big part of the book is covering the world of 3D animation, namely Newtek’s Toaster hardware and their software Lightwave. Lightwave was an incredible milestone in computer animation and thanks to Newtek it was now possible to use the system as a workstation for heavy 3D animation, a lot of movies in the early 90’s used the Amiga for lots of stuff but who would have guess that some of the 3D animation scenes in Jurassic Park (the movie!), Terminator 2 and GoldenEye was produced on the Amiga that by then was a very “old” computer but still beating “pics and mac’s” on many eras’s.

The book is a good read, it has some flaws and inaccuracies but on the whole, it is one that i would recommend to any Computer or gamer fan who wants to know more about the roots of Gaming and how one piece of hardware turned the whole industry on its head.

Follow Us... Inspire Us To Get Better... Keep The Flame Alive
The Love Clown : Gremlin’s Harlequin The Pirates Have Risen , Again! – RISEN 2: Dark Waters

12 thoughts on “The Book Of The Future. – The Future Was Here”