Astebreed is one of those games that have been sitting on my hard drive for longer than i can remember really, for some stupid reason i had to get it at a sale and as with most sales… you buy too much stuff and forget all about it… until the day you need to free up some space on the HDD and start doing the backlog thing again. 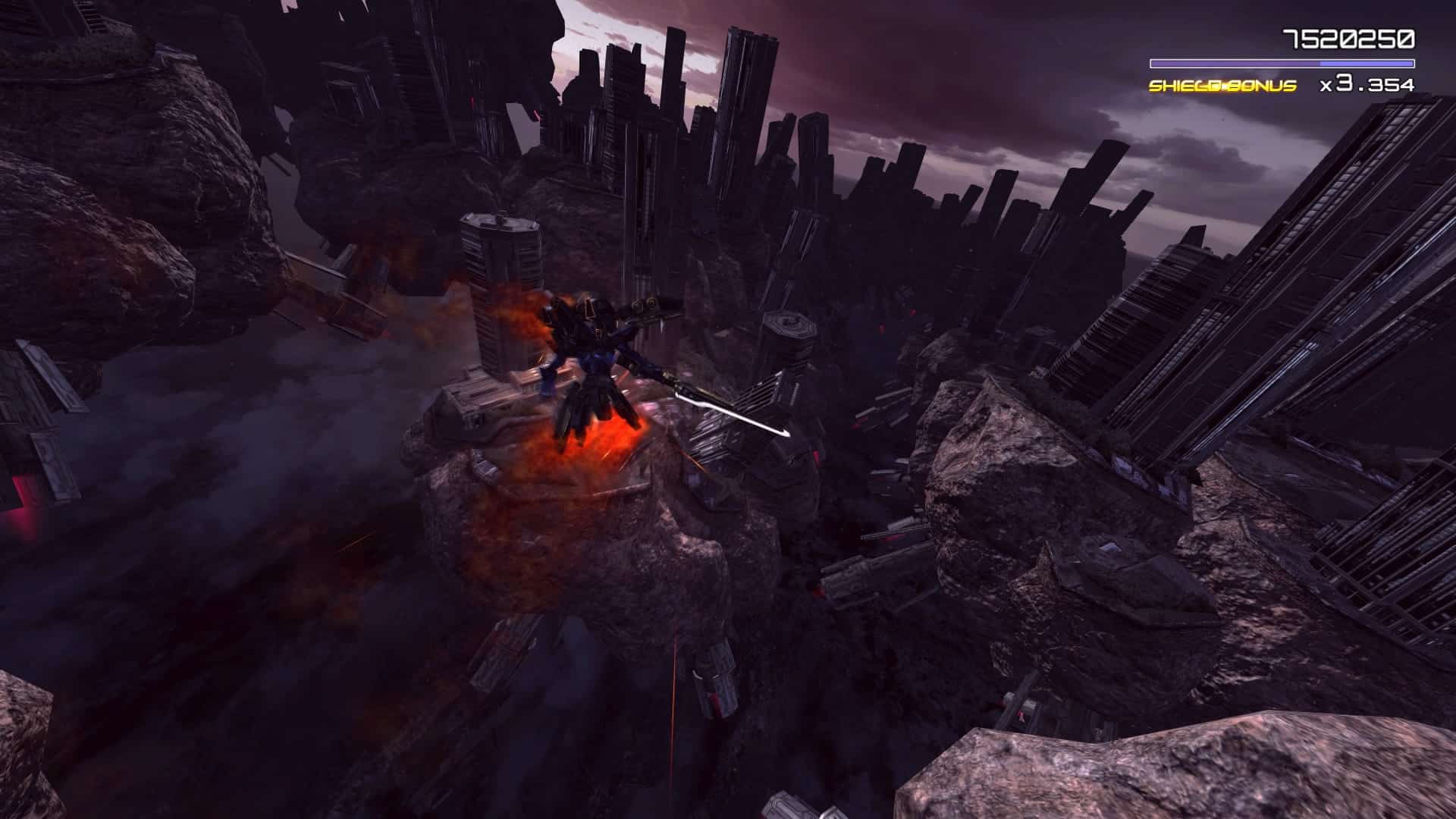 Astebreed is one of those ” hybrid shoot ’em up ” that have gone for all the classic variations of old-school shooters and put em into one game, yes it is a Railshooter, horizontal scroller, vertical scroller and a pseudo-3D mode ala the legendary Space Harrier and such.

The game features a pretty deep tutorial which is recommended to play through at least once due to the ranking system and the heavy use of how the weapon system works, you got skills like enemy tagging, close combat moves with a sword and so on. 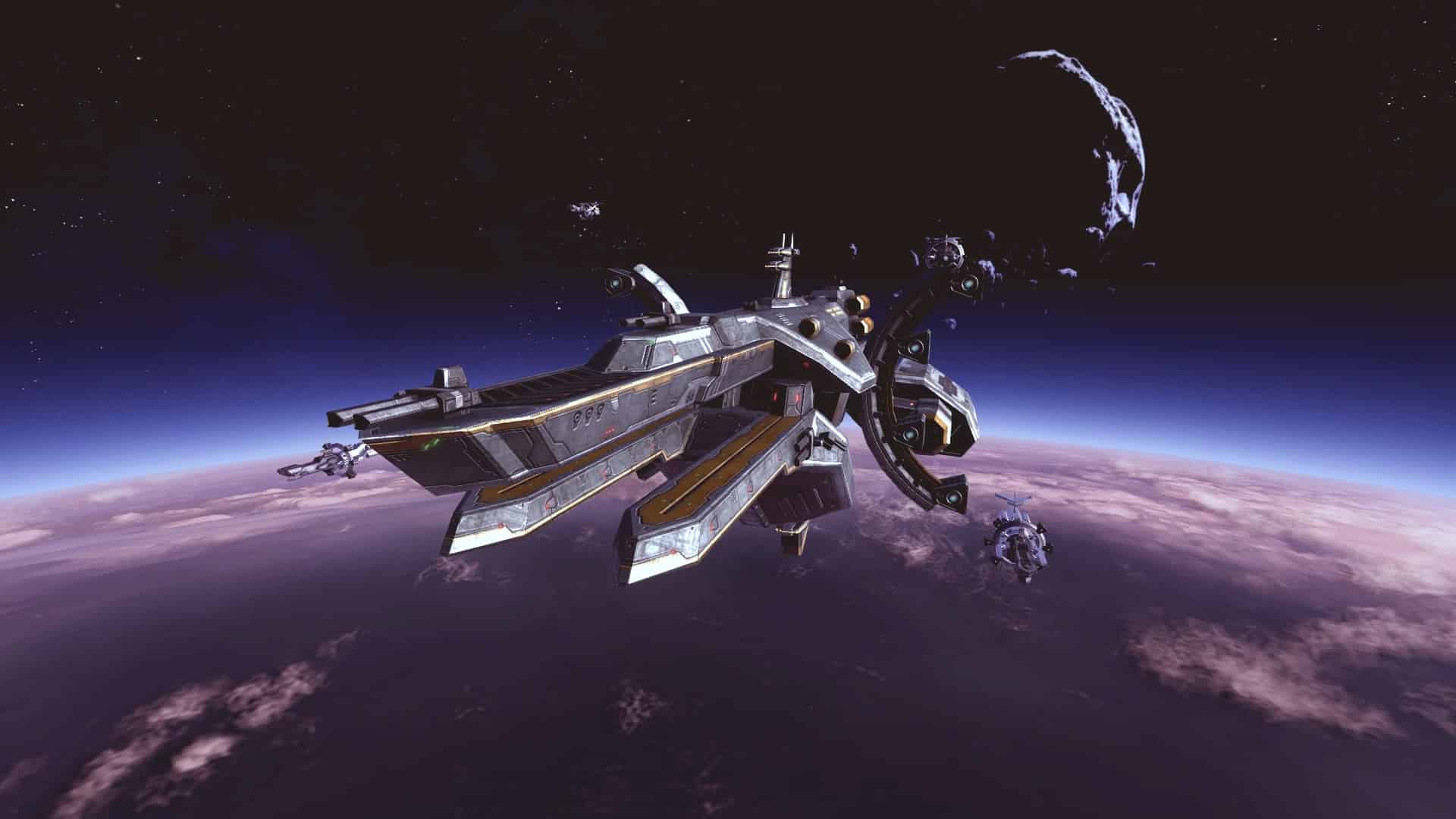 The first thing i thought while testing the game was, oh it looks rather good but i had skipped the tutorial so i played the game like a normal shooter and it didn’t take long before i was getting bored.

At this point, i had no idea about the right analogue stick TAG system and same went for the sword skill that you use to destroy projectiles with and so on, i actually went as far as completing the game and i was ready to delete the game and never look at it ever again…

Luckily i gave it a final try and this time i decided to try the tutorial too as i noticed that there was a trophy for playing through that (umm, yes i am being serious hehe).

My whole perspective on the game changed after the tutorial and i decided to play through the game once more and this time with the “new skills” that i had learned and even better, on a higher difficulty level. 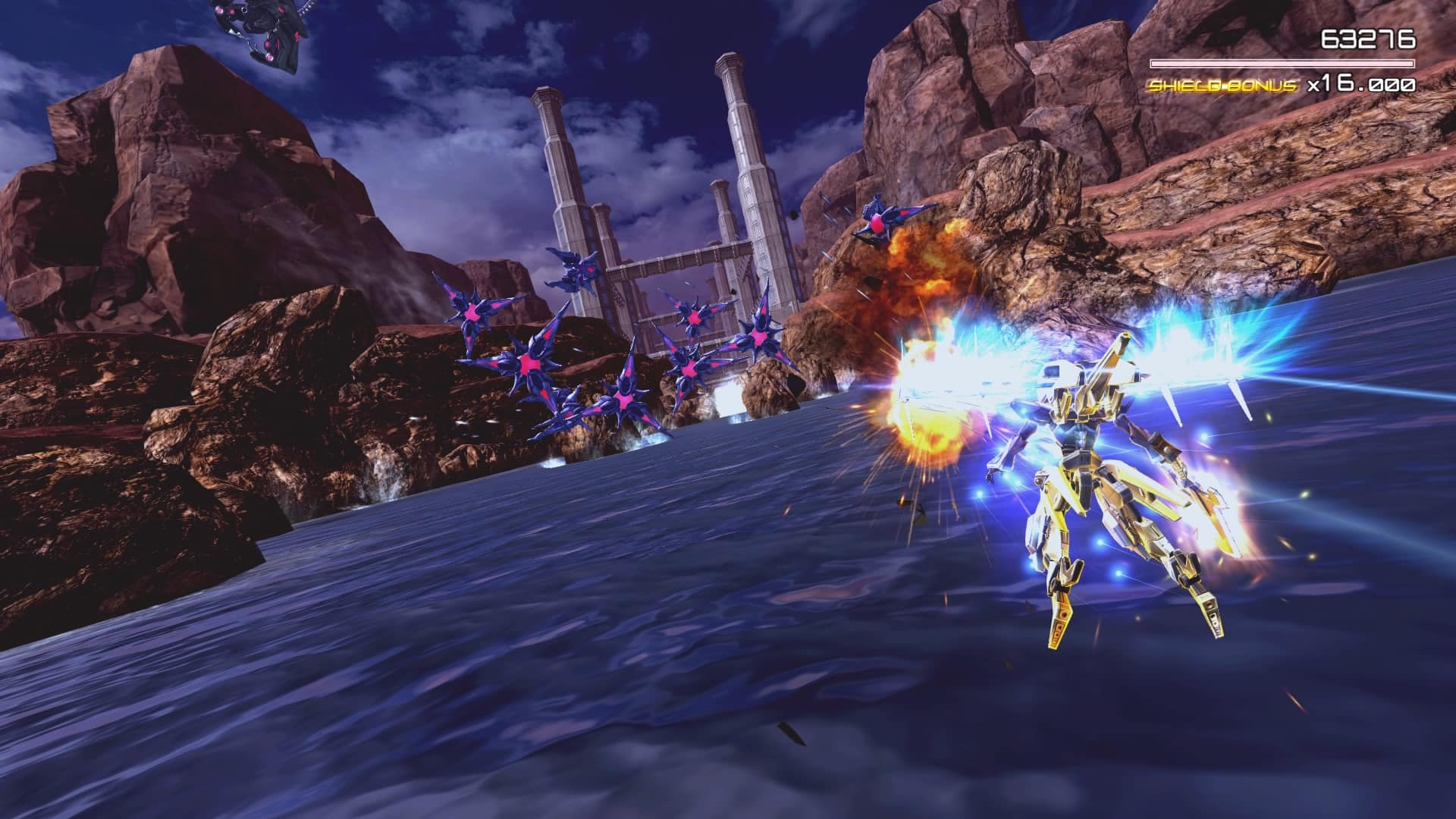 Here you can see the 3D Mode in action, there is proper scrolling and 3D here and it does work really good too, but like with games in the same genre… it’s just a video in the background basically and everything is on rails here.

The problems of Ikaruga, Radient Silver Gun and so on are present in this one too when you are deep into the action and all of a sudden the background starts doing crazy stuff like spinning, rotating and so on without it actually meaning much to the player or enemies at the screen.

The amount of action going on is pretty intense and somewhat too much at times. 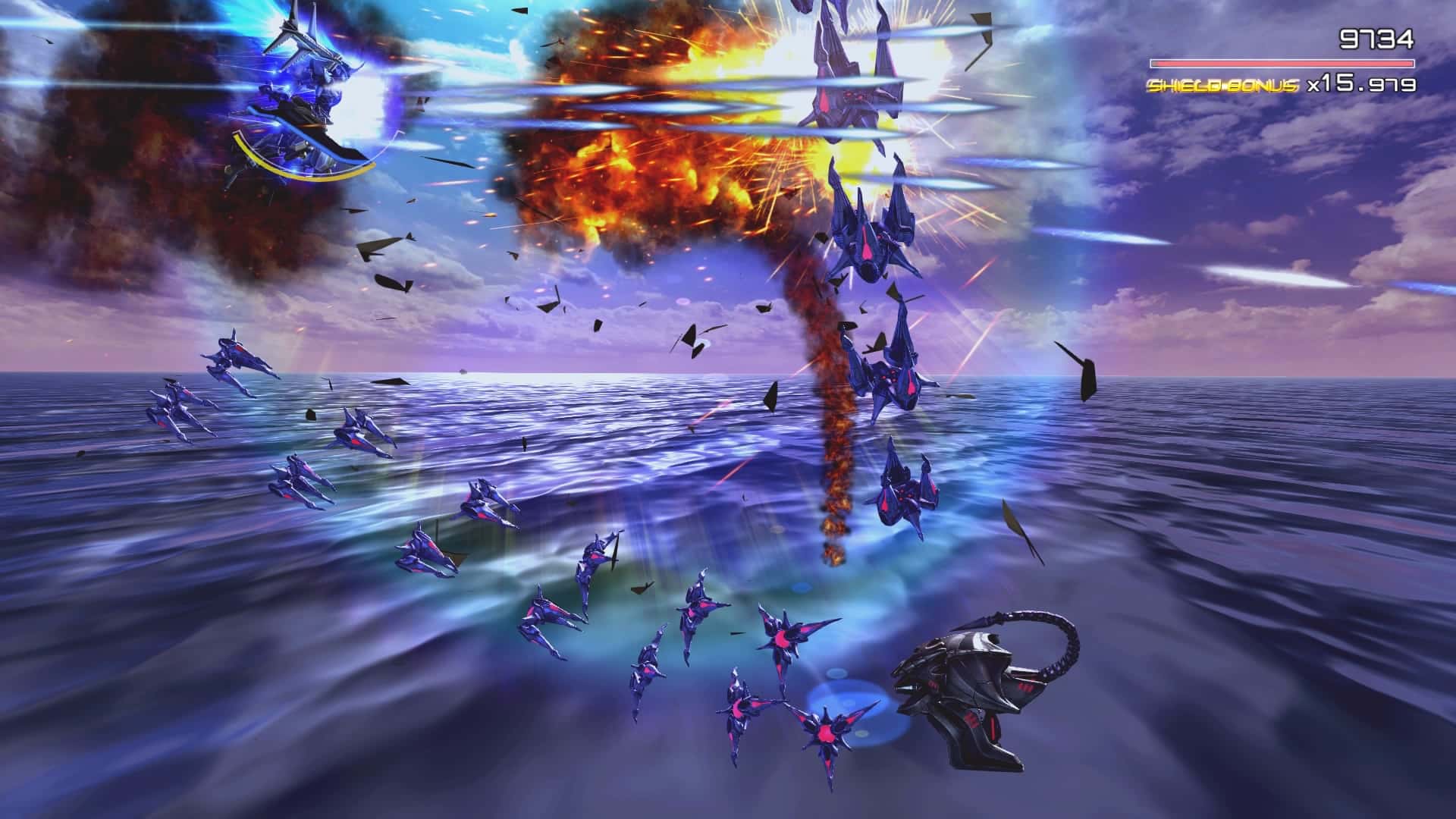 Here is the Horizontal scrolling mode in action, it looks really good right? well, not every level is this good but yes the use of colours and themes is often brilliant and easily desktop theme material if you ask me.

There is never any frame drops or clipping and from as far as i can tell the game run in 60fps(?).

The levels never drag out and one of the reasons for this is the dynamic switches between the different game styles. 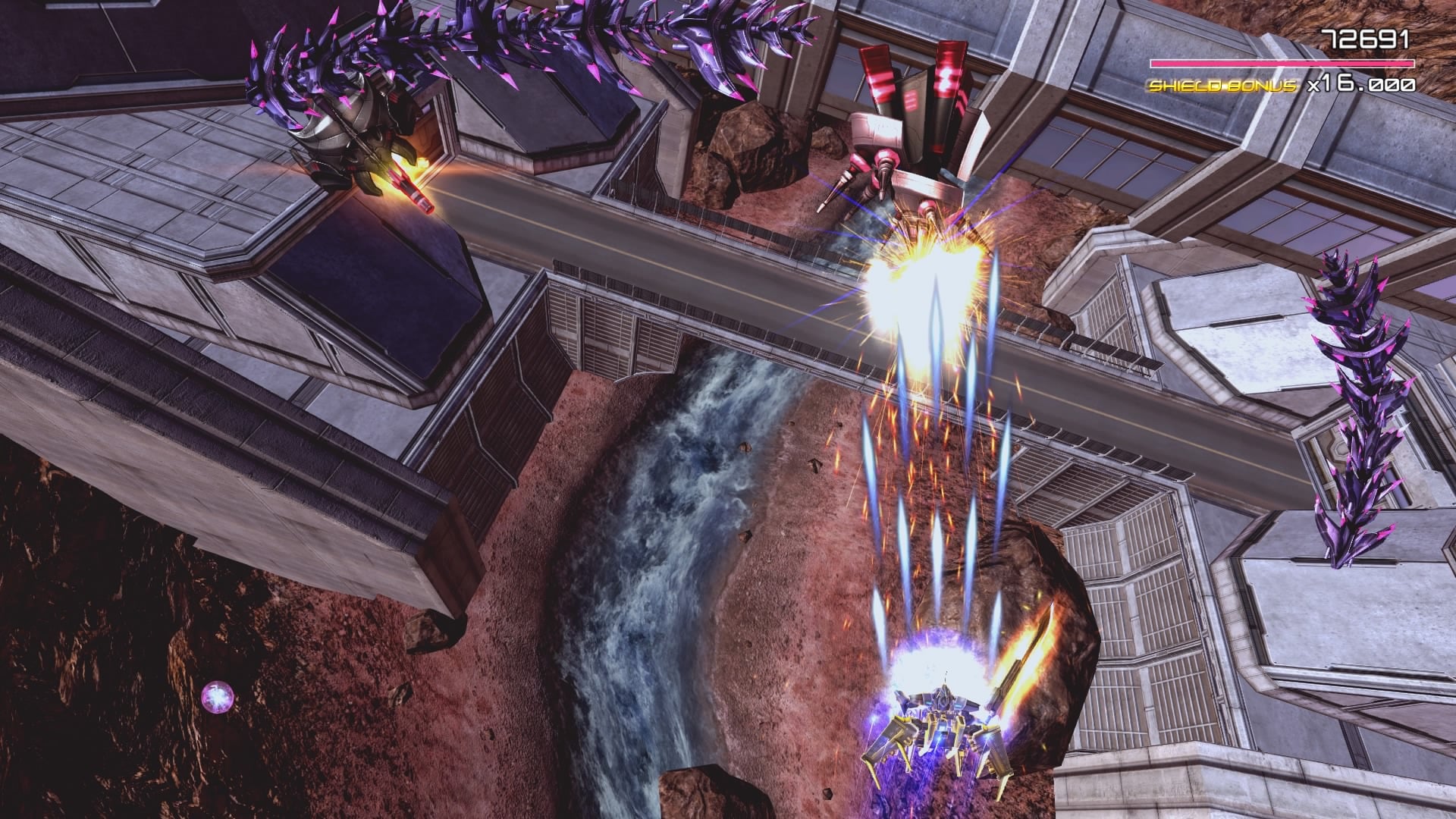 Here you can see the vertical scrolling section of the same world as the two first pictures, it works better than expected really and while this can be the most difficult part of the levels it’s still fun and it all becomes clearer once you figure out how to use the sword and tag system.

Even the boss fights changes dynamically between the playstyles, northern lights look like a tunnel in one of the modes but it ain’t that really.

Boss fights tend to be a bit – I don’t care if i die – due to the bullet hell, but i learned towards the end of the game that there is a pretty good system to it all and all you need is basically just to swing your sword all the time (hold the button) and then most projectiles won’t hit you.

The graphics and style changes frequently in the game, some magical colours used from time to time. 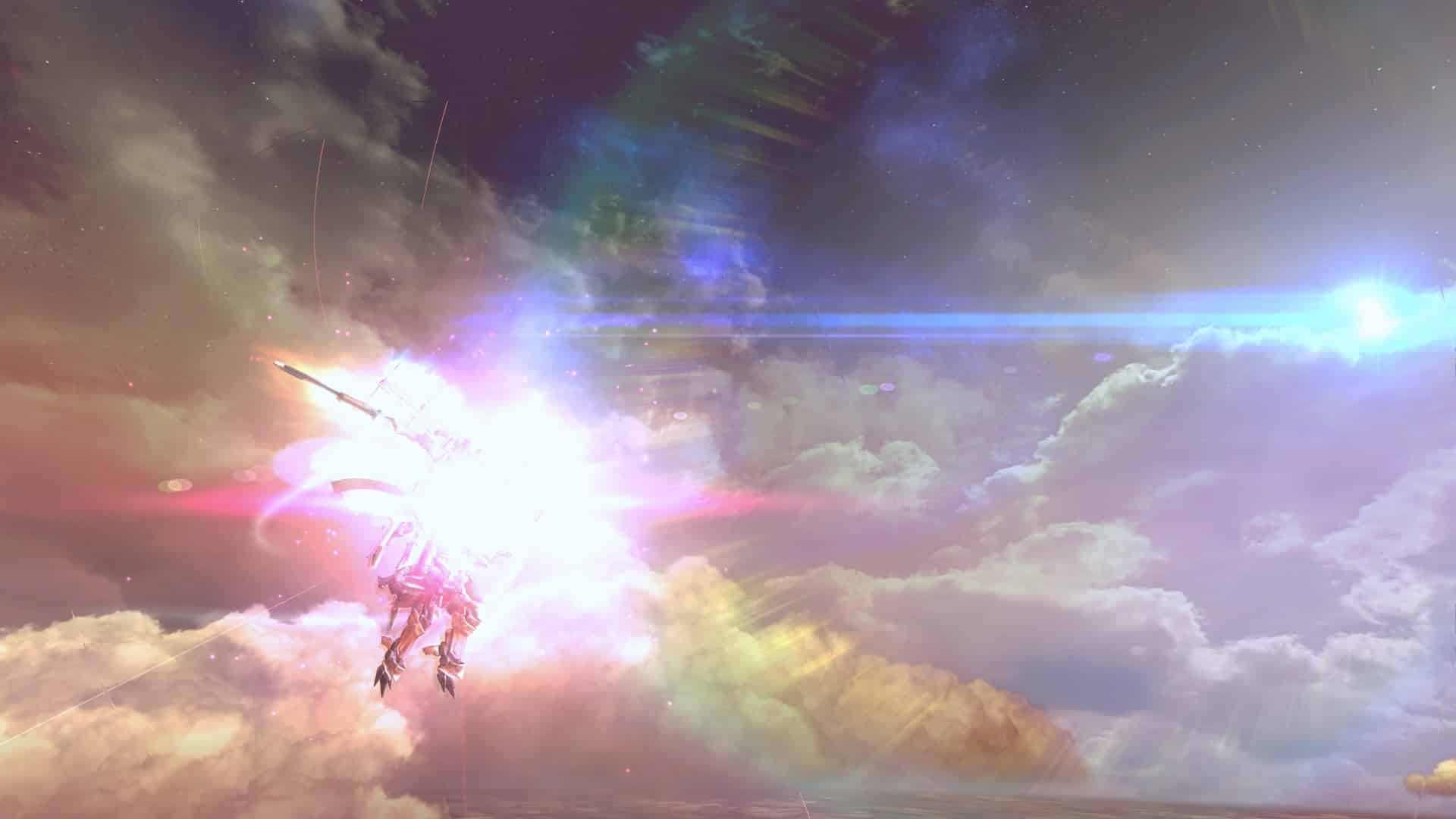 This picture is one of many examples, this is just a normal in-game shot really, it looks incredible. I ended up with doing a crazy amount of these shots while playing the game and my OS4 background selection has grown quite a bit now.

You got a million shades of brown, green and purple in the game, just about every colour is used and i can’t really complain about it either as it keeps on looking good and flashy.

The soundtrack in Astebreed tries too hard to be something special and right now i am having a hard time to remember any of it, a shame really as we need more killer soundtracks in games like this. 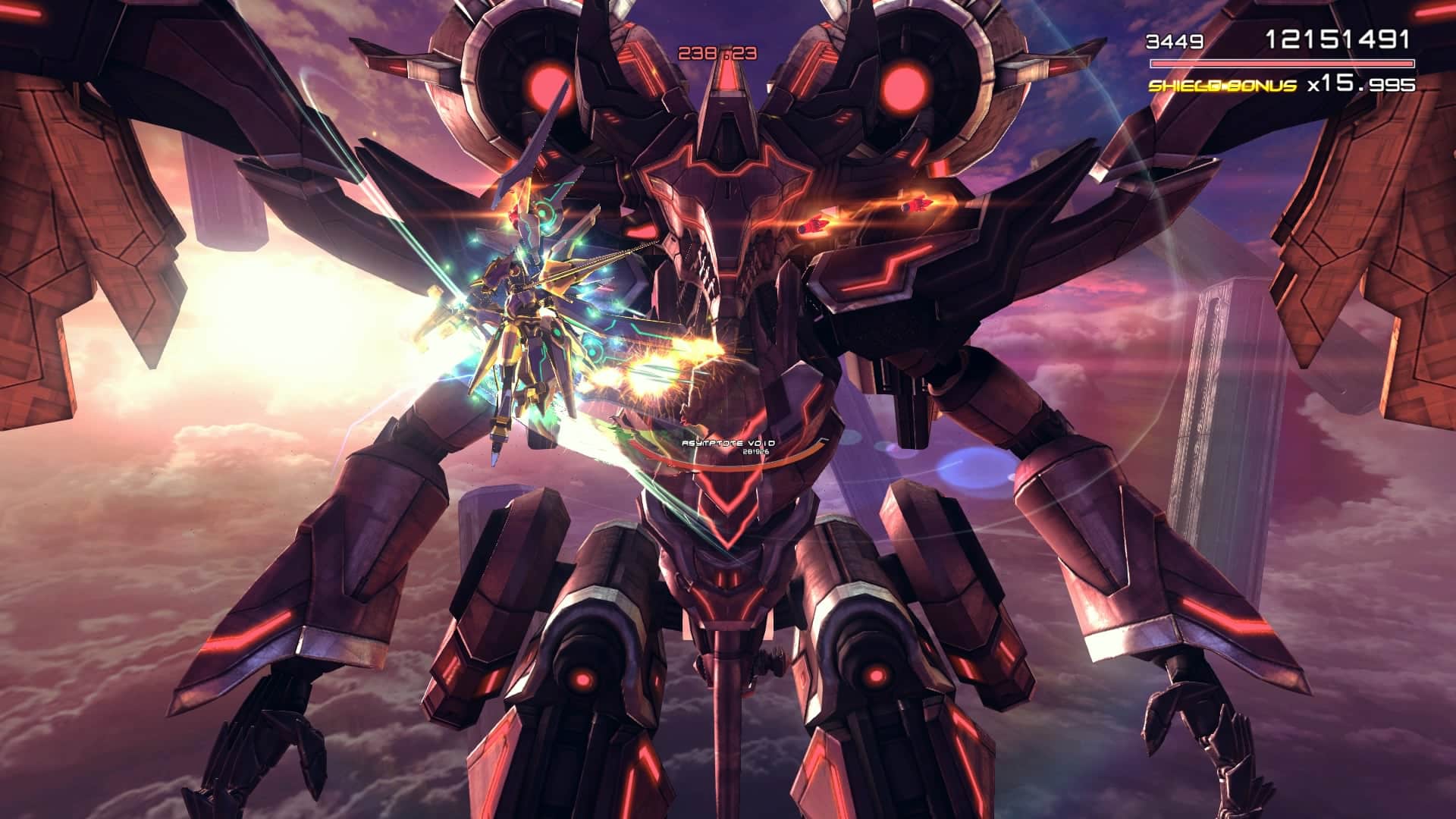 The boss fights will always make you feel small and useless.

Astebreed started as a PC game and i always thought that it looked a bit too much western for such a game, little did we know that the game turned out to be something quite different once i gave it a good and long try.

It ain’t a brilliant game and it’s certainly not one of those that every retro shooter fan out there should get either, Astebreed can be a bit too much of the good really and in the end, it breaks the game by design as it becomes sterile and too clean for most.

When you compare this game to Stardust Galaxy Warriors, Ikaruga or even Sky force Reloaded is when you realize that Astebreed is somewhat lacking and a bit soulless at times.

A good game all in all, worth your time if you’re into shooters for sure.

6 thoughts on “A Little Bit Of Everything & Nothing – Astebreed”