Good vertical/top view shooters are many, way too many to mention and i am sure i will trigger some emotions when i say that my favourites of all time were mostly from the late 80’s era.

1942, Raiden, Twin Cobra, Banshee and Flying shark being the ones i like the most and to me they all count as both fantastic games and some very good childhood memories.

Sky Force Anniversary is the new king of retro shoot em ups, yup it beats just about every retro vertical shooter out there, and here is why… 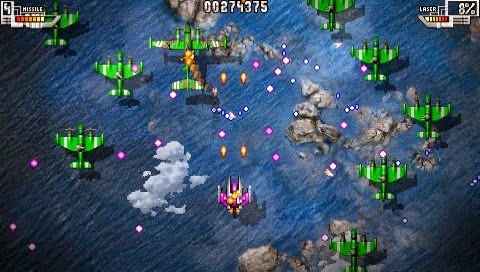 Sky Force is actually an old IP by now, over a decade old to be exact. It was actually ported (from PC) to PlayStation Portable (MINIS) half a decade ago but due to the format i somehow managed to let it fly by unnoticed.    – Pretty standard game by the looks of things. 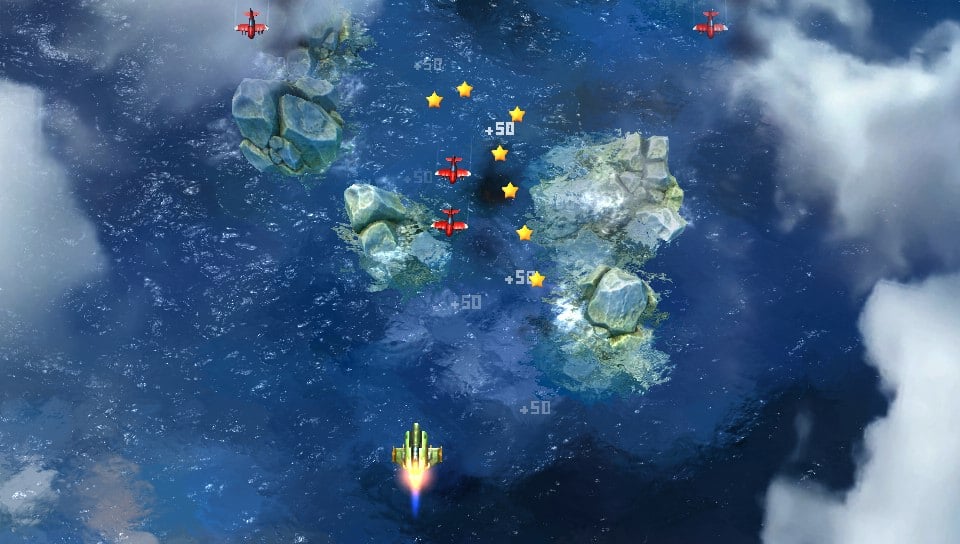 Sky Force Anniversary ain’t the same game, its gone from 2D bitmap gfx to 2D with 3D polygon gfx, they updated and rehashed most things but unlike most other new retro shooting games they didn’t add a gazillion effects and annoying concepts to try and make the game appeal to “new gamers”. 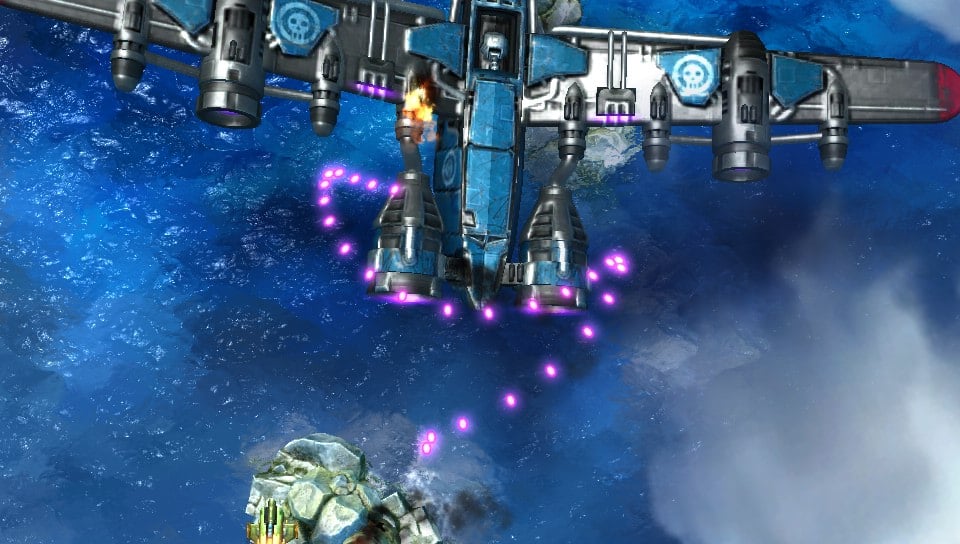 The huge bosses in the game almost feel like if they came straight from the very same cauldron that every good shoot em up developer in the 80’s and 90’s used, hell i won’t go into details but everything feels very familiar here.

The boss fights are solid and good fun, i don’t care if it feels familiar because it works so remarkably good. If everything is copied from somewhere then i just have to say that they did wisely in doing so as to why fix something that ain’t broke?. 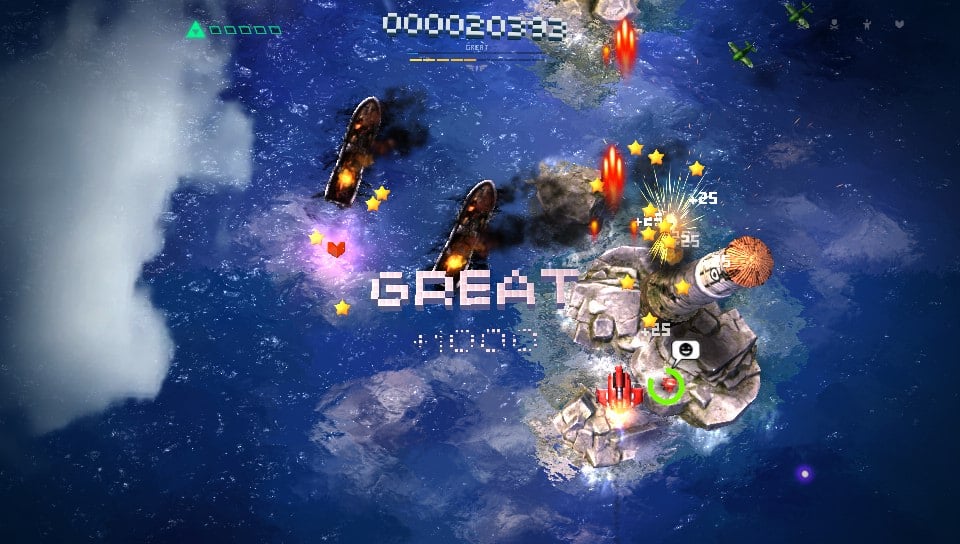 The first thing you might notice with the game is how “slow-paced” it is, this won’t last as the game build up is more aimed at having fun than wanting to destroy the fun by punishing the player.

The strange thing is that while getting harder it never goes like most games in this genre goes today – yes, into bullet hell.  Sky Force Anniversary never hits “bullet hell” status, not even on the highest difficulty level although it has to be said that it is a nightmare of a difficulty level.  – Bullet hell is to me when the screen is constantly littered with bullets in various patterns, dodge and shoot and dodge and dodge etc. 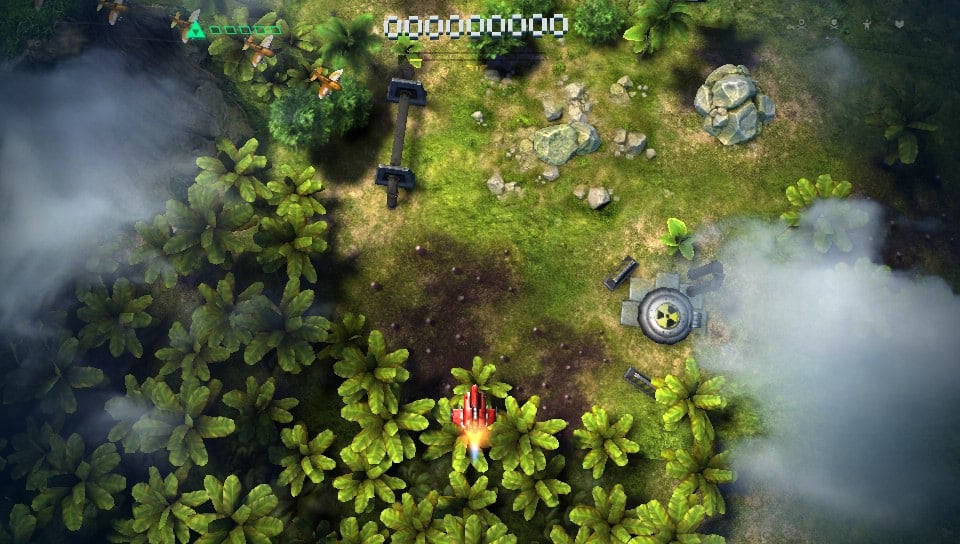 There is a neat upgrade system in the game, this system might be a bit too much of a grind for some people at first, but you earn upgrade “stars” as long as you play the game which will lead to better upgrades.

There are quite a few things to upgrade like the main weapon you upgrade these with stars in the hangar menu. Upgrade once and you have it forever.

Then there are the 3 sub-weapons like a shield, laser and a smart bomb which sounds like awesome weapons and upgrades, well yes they are but they cost stars to “fill up” before you start a new game and even worse is that if you don’t use the weapons then you lose them when you die. 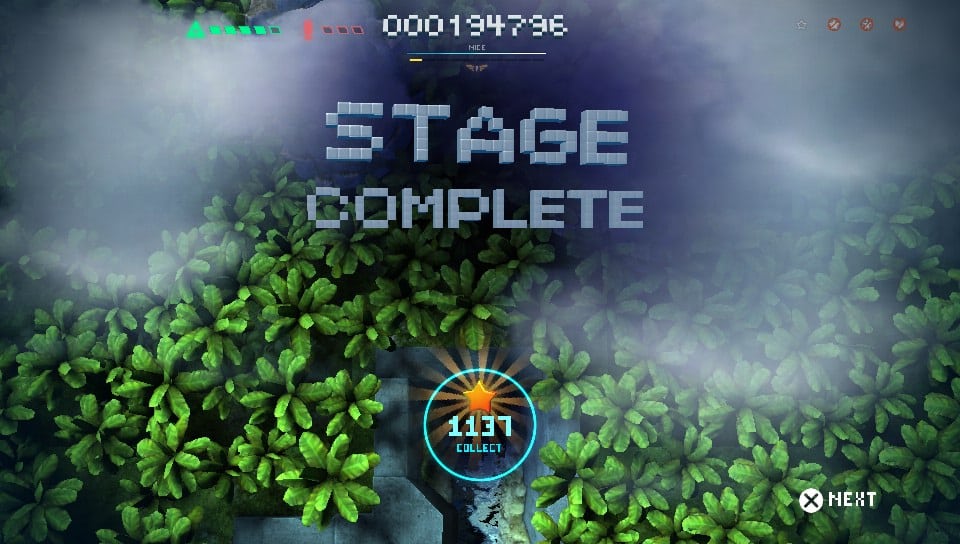 The more you progress into the game the larger the number of stars you get, i found out that Level 2 was a perfect “boost” level, especially so when i unlocked the higher difficulties on it.

I eventually found a hidden bonus card (more about those below) which awards me the double amount of stars, now i get over 2000 stars for just completing level 2. 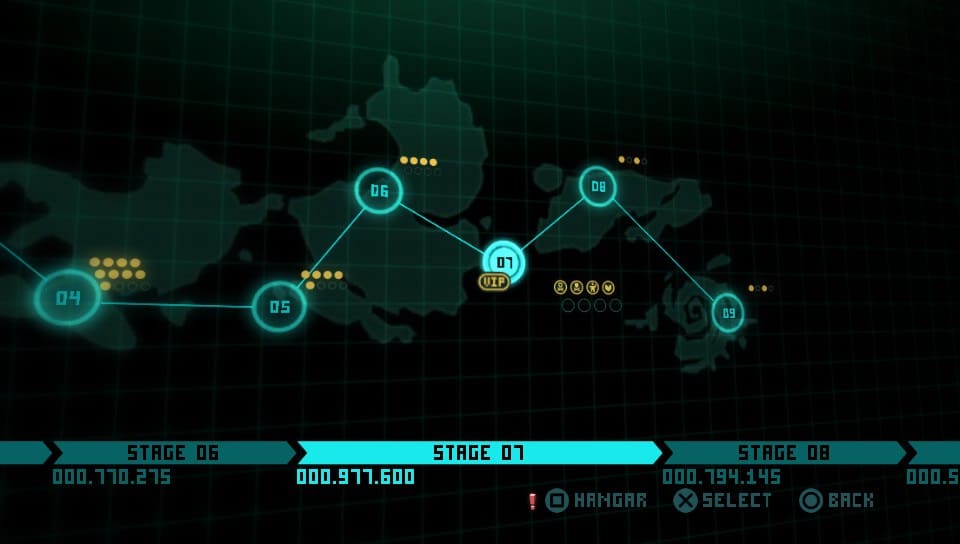 Sky Force Anniversary got 9 levels in the game, it might sound little but it is actually quite a lot when you look at how the game is built up…

You have to complete a level to unlock the next one but you also have to make sure you have enough level points too.

Level points are small tasks/milestones like “save all men”, ” kill all enemies” and stay untouched the whole level etc.  Each level has 4 milestones and if you manage to get all 4 of them on one level then you unlock a new difficulty (Normal, Hard, Expert etc) and with that comes 4 new milestones too. 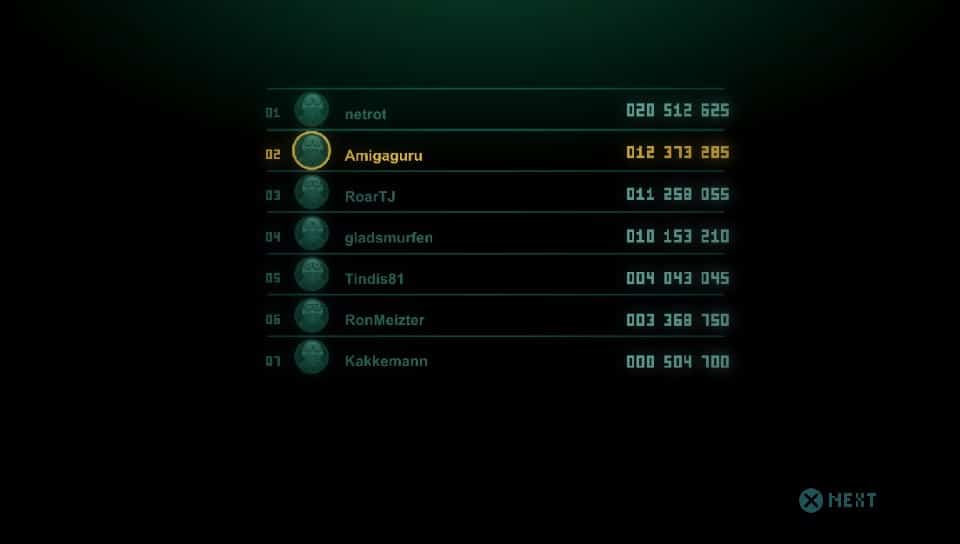 These things work wonders for motivation. 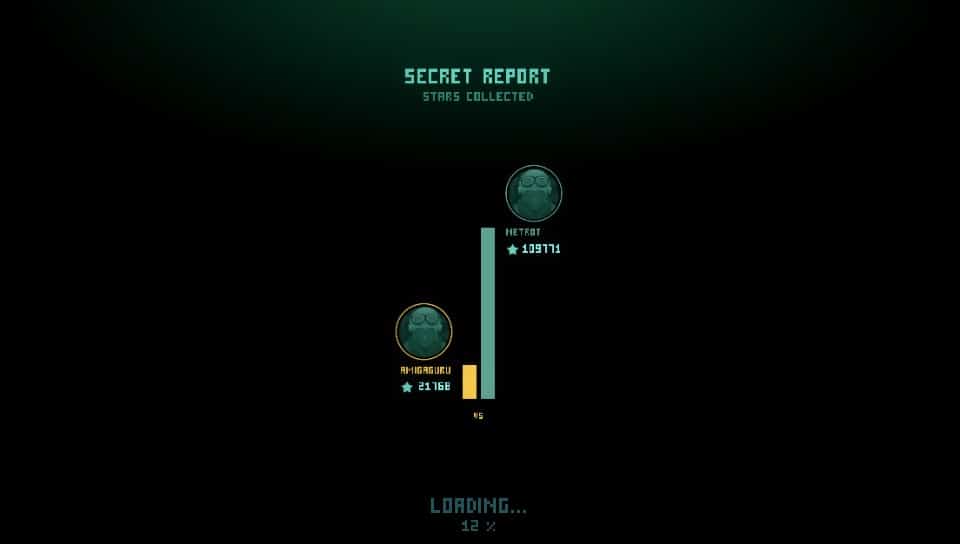 Nothing beats staying on top of a scoreboard, but beating people like Netrot (hello :D) sure requires skill and patience.

When talking about the social part of the game there’s one thing i have to mention and that is the 2 player mode.  There ain’t any 2 players online mode in the game, only couch play (PS3 / PS4) but if you got a PS4 then you can use the “SharePLAY” feature to enable the game for online play, and yes it works great!. 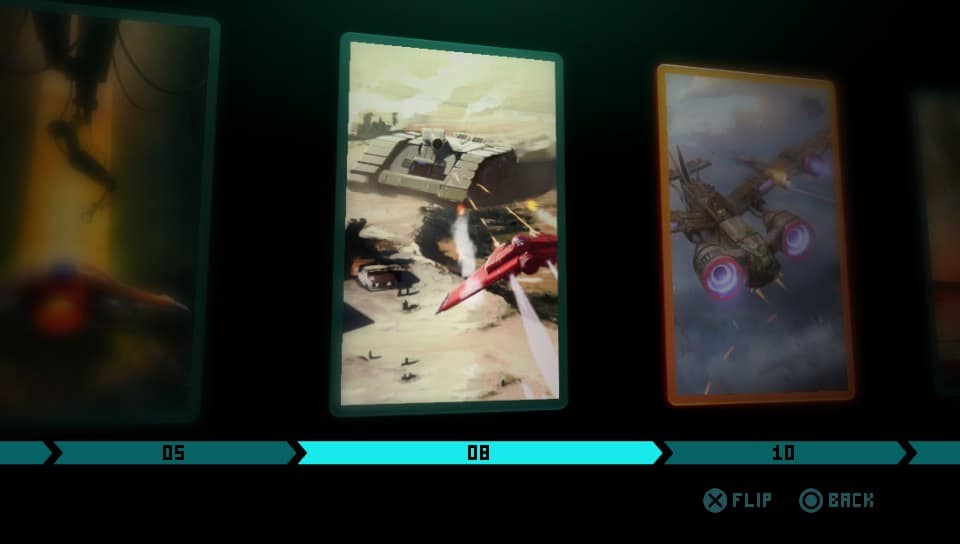 There is hidden stuff in the game too, these cards are hidden bonuses you find while playing (and doing special tasks?). They unlock various gameplay tweaks like more efficient weapons or double score, pods etc,  you only unlock these once and they will stay with you forever. 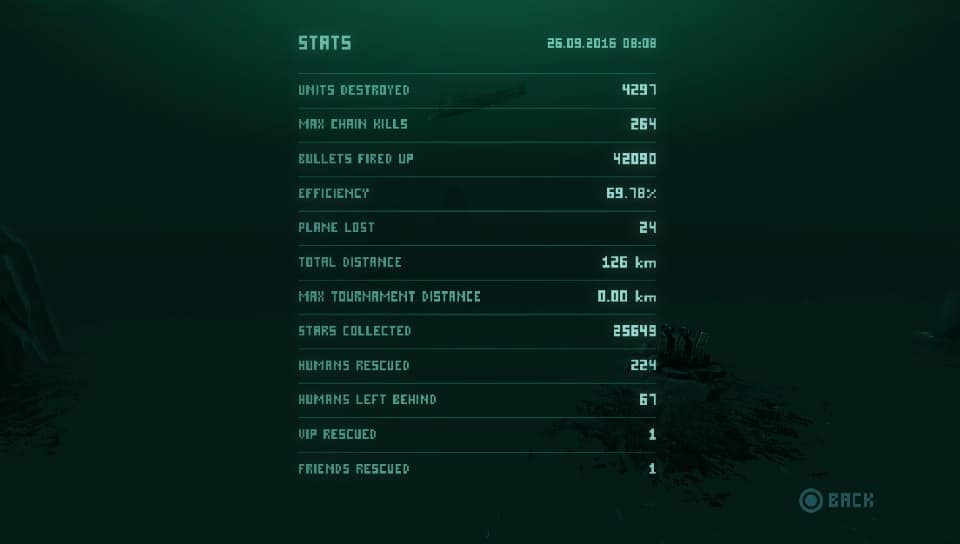 The only sad/buggy part looks to be the stats screen, these are not in the cloud for some reason, the stats above are from my VITA and it is the least played version so it was easy to spot that the stats ain’t showing the total of all versions of the game.

The game is cross-play, cross-save and cross-buy which means that you can play it anywhere and everywhere for the price of one($10 USD/Eur). The best one is the PS4 version but both PS3 and Vita versions are fantastic too.

Sky Force Anniversary is the best retro shooter i have tried in a long, long time.

11 thoughts on “A Look At Sky Force Anniversary”