When I published my article on A Cyberpunk Trilogy, I left you guys with an open question about the PSP version of Ghost in the Shell, the reason being the lack of hardware necessary to test it.

Luckily, a few weeks later, a northern Europe tooth-fairy blessed me with the game AND the appropriate hardware, so here I am, completing my review. Since I have no experience of hand-held consoles in general nor of PSP in particular, some of my considerations might not be completely accurate.

For this, I apologize in advance. Nonetheless, I’ll try to report my honest feelings about it. Keep your fingers crossed……

The game, obviously based on the famous anime/manga franchise (manga artist Masamune Shirow and anime director Mamoru Oshii) is a PSP version of the action-adventure game produced by Sony Computer Entertainment in association with Production I.G. Probably due to the technical constraints of the console, the developer elected to produce a “futuristic” first-person shooter instead of using the platform-adventure-shooter formula of the PS2 game. 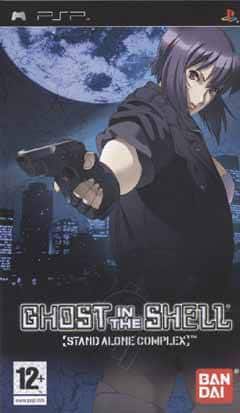 The gameplay is rather simple: using Motoko’s agility, Batou’s strength, Togusa’s stealth or Saito’s sniper skills, you have to take out a terrorist cell responsible for various crimes, such as bombing, kidnapping or illegal access to crucial governative installations and/or information. To fulfill your mission, you can train and customize your Tachikomas to assist you and hack into enemies to obtain vital information. The game also features wireless battles and communication for up to 4-players (which, by the way, I haven’t tried). 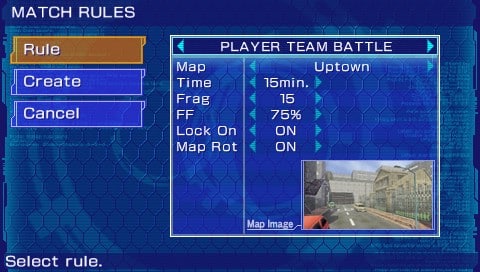 The story-line is written in a way that closely resembles an episode (or group of episodes) in Stand Alone Complex. The game doesn’t really have a “real” ending and there are a lot of loose ends. The web articles I scanned the report that the story works better this way and, personally, I agree with them. Ghost in the Shell is a constantly evolving and continuing series, so there is no point for closure. As a matter of fact, GitS full-length movie#3 is due soon, so…

As written above, you can choose from 4 different characters, even if each of them basically plays the same with minor differences (hit-point levels and character agility).

Some characters are better with certain weapons than others. Each character can hold 3 weapons at a time. For what I learned, the default control scheme is the “standard” FPS layout on the PSP – directional pad or analog nub moves your avatar while the buttons allow for a look around. Finally, R trigger shoots and L trigger jumps. In my experience those controls work out very well, so nothing to rant about, this time. There is a “lock on” feature to target enemies automatically, but I personally could not make good use of it.

The action gets packed pretty fast and since the levels are rather small, you will be soon very busy in shooting and running. Most levels won’t take longer than 3-5 mins to complete, even though it sometimes took hours to me to do it since I’m not very good at FPS and I’m absolutely not used to this kind of controls. The number of enemies is generally high so, even if the AI is pretty dumb, you can be overwhelmed rather quickly. The level design is fairly good and non-linear enough to keep you from feeling you are playing “on rails”. The action consists mostly of running and gunning with some focus on “key gathering” or “personal protection”. 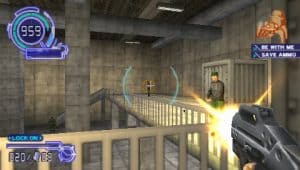 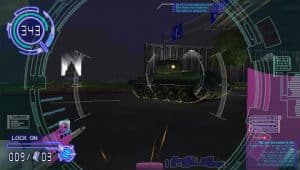 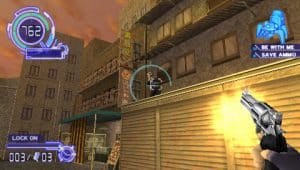 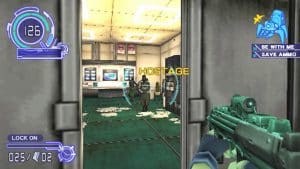 At times you will need to disable an enemy and then hack into him from up close while still under enemy fire. Probably one of the coolest features in the game is the Tachikoma side-kick that follows you around through most of the levels. There are 4 different personalities to choose from – Average, Humorous, Intelligent and Aggressive. You can equip them with a wide variety of weapons before missions.

In combat, you can issue them basic commands. Their AI is, surprisingly, pretty smart and fun to use. They can easily back you up when you’re in trouble, even though sometimes they get all hyped up and try to fight when they’re too low on health. Best of all, most of the time you can jump into the Tachikoma and drive it. They jump higher than your character does and have more health points. Their weapon loads out is generally more powerful than what your character can carry as well. Sometimes it’s necessary to use them to get to areas you can’t reach. 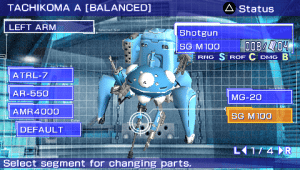 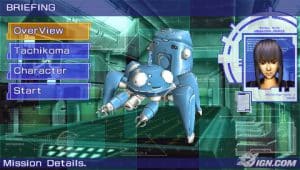 As far as the technical compartment goes, I believe GitS has a decent graphics and a very nice sound. Although un-detailed, the backgrounds transmit the same feelings you can get from the TV series while the techno soundtrack fits perfectly in the game, even if it is repetitive in the long run. It really has a mid-90s anime feel to it and the music matches the action most of the time.

As said, the game supports multiplay for up to 4 players. I haven’t tried this option, but from what I read you can play as Tachikomas or as humans/cyborgs from single player. 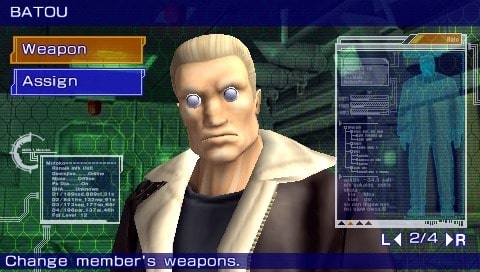 There is a 5th character (Aramaki- chief of Section 9) who is only available in multiplay. You can use the weapons you’ve collected in single player.

In the end, I think that this game is a fair one that will keep you busy for a while. It looks well done to me, even if it is frustrating at times. Most levels are quite large, with a variety of tight tunnel crawling and open field action to mix things up. 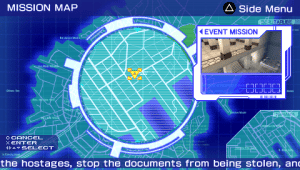 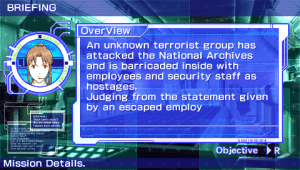 You have a ton of mission types, too, ranging from capture and save to escort, and total action, and the AI people you escort or fight alongside almost never get in the way or walk to their death like they do on so many FPS. GitS also has a decent replay value, since you can go back through the levels and collect all the weapons/enhancement parts you missed during your first playthrough. You can also complete each mission with every one of the four characters. 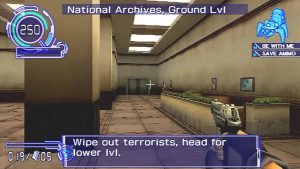 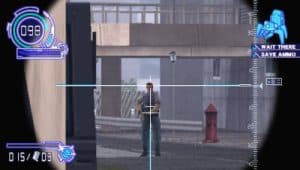 There are not many games around like the Ghost in the Shell saga, so if you are a fan I suggest you not to miss it. Unfortunately, this saga never made it on PS3, although our beloved console had excellent Cyberpunk installments – the best one being “Deus Ex – Human Revolution” (IMO). In addition, a few months ago Capcom came out with the controversial “Remember Me”. Expect a report on it in the near future.

CYBERPUNK IS NOT DEAD! 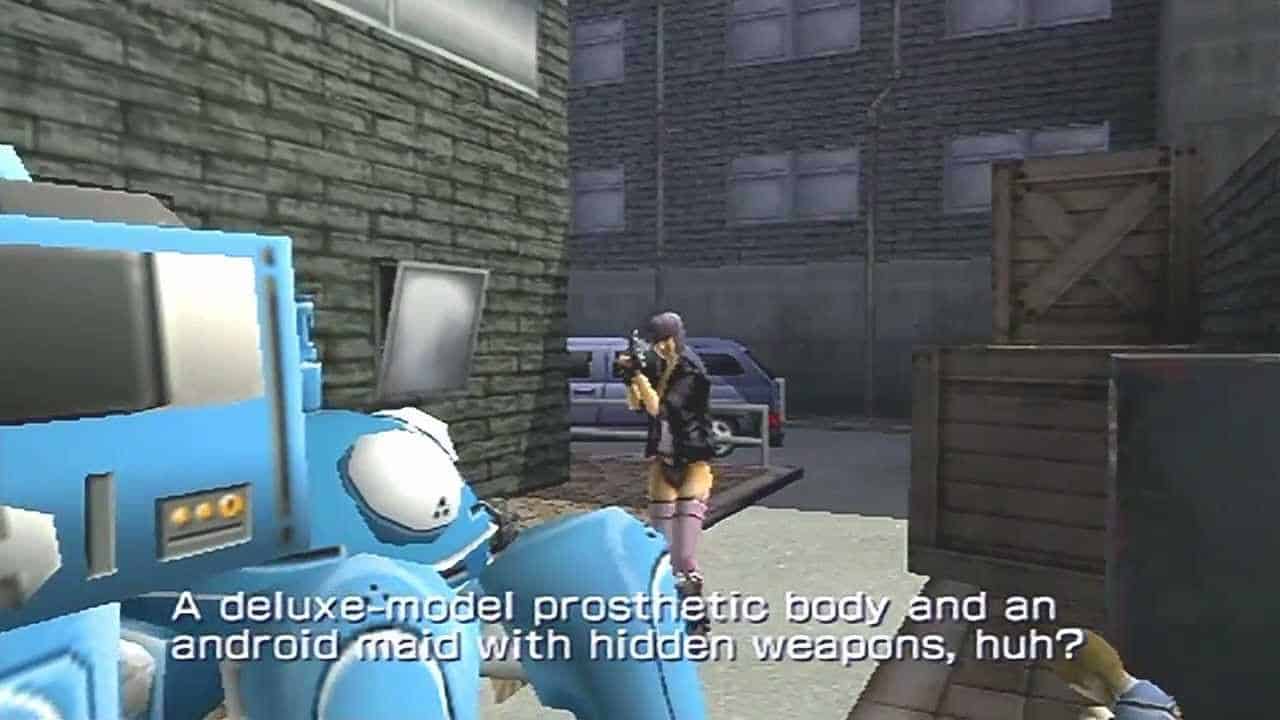 Otaku’s corner: I recently found out a new cyberpunk anime called “Mardock Scramble”. Although far from the excellence of Ghost in the Shell, it might worth a try… 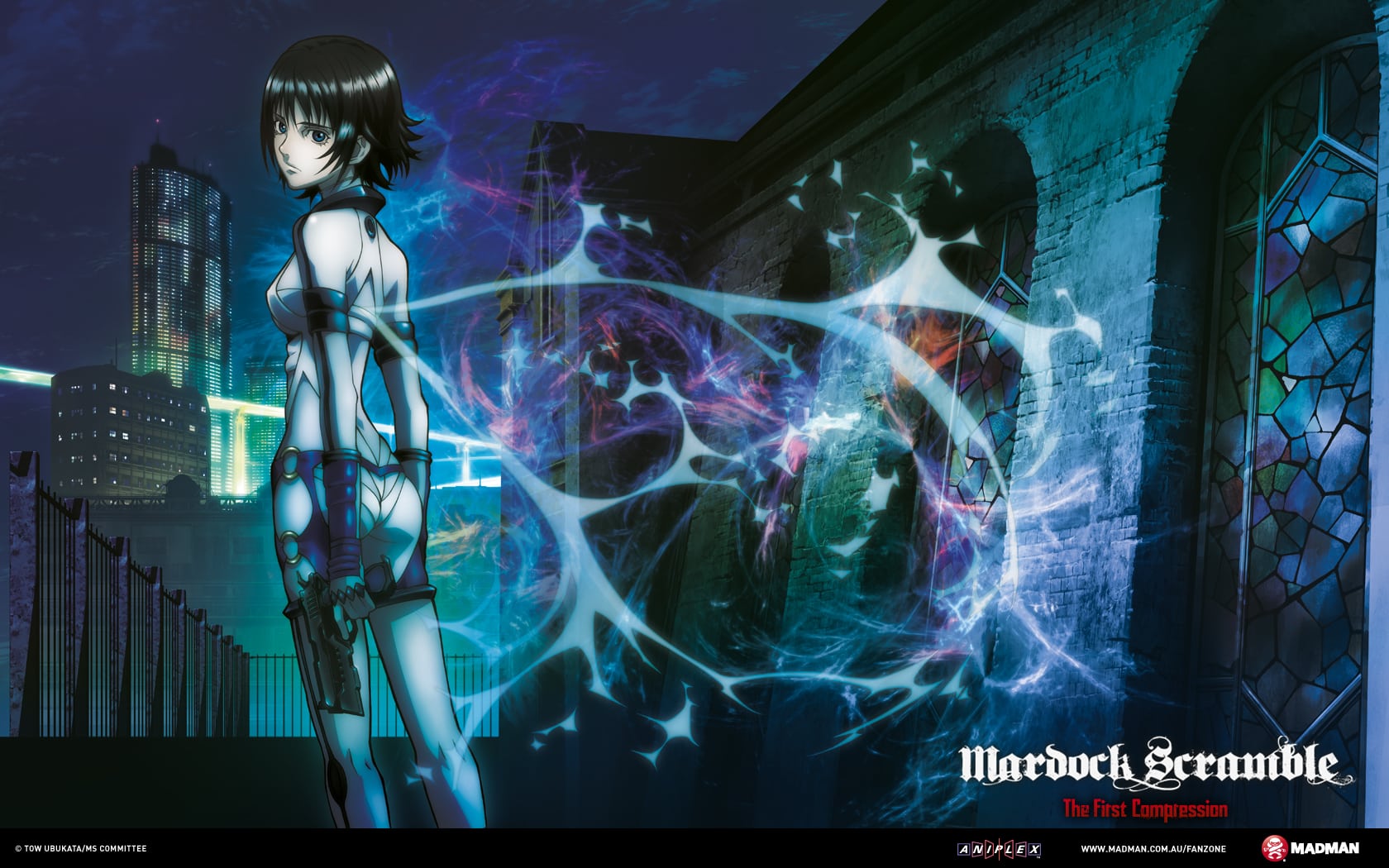 Follow Us... Inspire Us To Get Better... Keep The Flame Alive
Tags: cyberpunk, psp, PSPWednesday

2 thoughts on “Cyberpunk, take 3 – Ghost In The Shell PSP”