I have selected Sengoku Cannon for my #PSPWednesday article this week and the reason for that is pretty simple really, it is one of those games that just keep on being ignored by the community in general, why this is happening might be down to the fact that it was never released in the west at all, oh and yes, it is yet another 2D Horizontal retro old school shoot’em up. The developer and publisher are one of those that just vanished from the face of the earth when the last few arcade machines stopped popping up, PSIKYO /XNAUTS screams quality to most fans of the genre and it is hard to understand how this company went under with such a huge following.

As with most Japanese companies, it is a bit hard to dig up all details to why they went under and when exactly, but it does look like this was their last game before going bankrupt in 2005.

If this is where you go… Who? never heard of them, well, they made one of the best shooters ever made and yes that was a Dreamcast game indeed, nope not Ikaruga (Treasure) as it was GUNBIRD 2/Mobile Light Force 2 (review soon…). Sengoku Ace (also known as Sengoku Samurai) is actually a very old series that originates from the golden days of the Arcades, the first game came out in the early 90’s and that one was a Vertical shooter, the sequel Sengoku Blade was released on the PlayStation 2 a decade or so later, the fans gave it rave reviews and everything looked bright for the franchise and this is most likely the reason why the third and final game in the series came out for the PlayStation Portable a year or so later. The odd thing about this game is its engine, Sengoku Cannon is powered by Criterion’s RENDERWARE engine which was first and foremost an engine created for 3D games and often seen as PlayStation’s answer to DirectX.   Why is it odd again? , well Sengoku Cannon is a 2D shoot em up…

Sengoku Cannon got that typical PSIKYO look and you will come across some pretty familiar faces if you’re into these type of games. The style is clean and very typical for its age and nothing is ruined because of them trying to do a 3D thing out of it or whatever. This is from the first level of the game, doesn’t look like a typical game for the worlds first proper 3D handheld right? Well, I’d say its a perfect fit for the PSP and for the first time on a handheld you got proper framerates and a good sized screen too, keep in mind that this was before that fantastic OLED VITA screen (and various smartphones/tabs etc). It feels like a fit albeit very simple and not exactly mindblowing or flashy.

The further you progress into the game the more bullets, enemies and umm backgrounds you get.  The background can be lacklustre sometimes indeed and especially so in the screenshots but when you actually play the game yourself and are totally into the action is when you realize that the action going on and the gameplay mechanics in the game works tremendously good for such a title, especially so for a handheld title.

Huge bosses, lots of action going on and a pretty cool story with multiple endings to boot certainly make this one a must for every shooter fan out there. The game is fully playable and enjoyable for most gamers out there thanks to the self-explanatory gameplay style and mechanics, the usual tutorials are in place but as seen above… no English to be seen. The story is a different thing as this is just text and well, let’s just say like I always say when it comes to story-driven shoot em up’s – WHY IS IT EVEN THERE?

I love the pictures and the art style a lot, but the text boxes not so much.

Every boss battle got its own story thingy and with those, you get some fantastic art and a lot of (fully skippable) text boxes.

I haven’t included all the bosses in this article as i know i got a lot of fans reading these articles and i really don’t want to spoil the fun even though the game is 13 years old by now.

Loading times have always been a bit of an “issue” on the PSP for me, most of the games come with black loading screens where you sometimes will go like “hmm, did the game lock up on me now or ?” , Sengoku Cannon ain’t one of those thanks to awesome loading pictures. 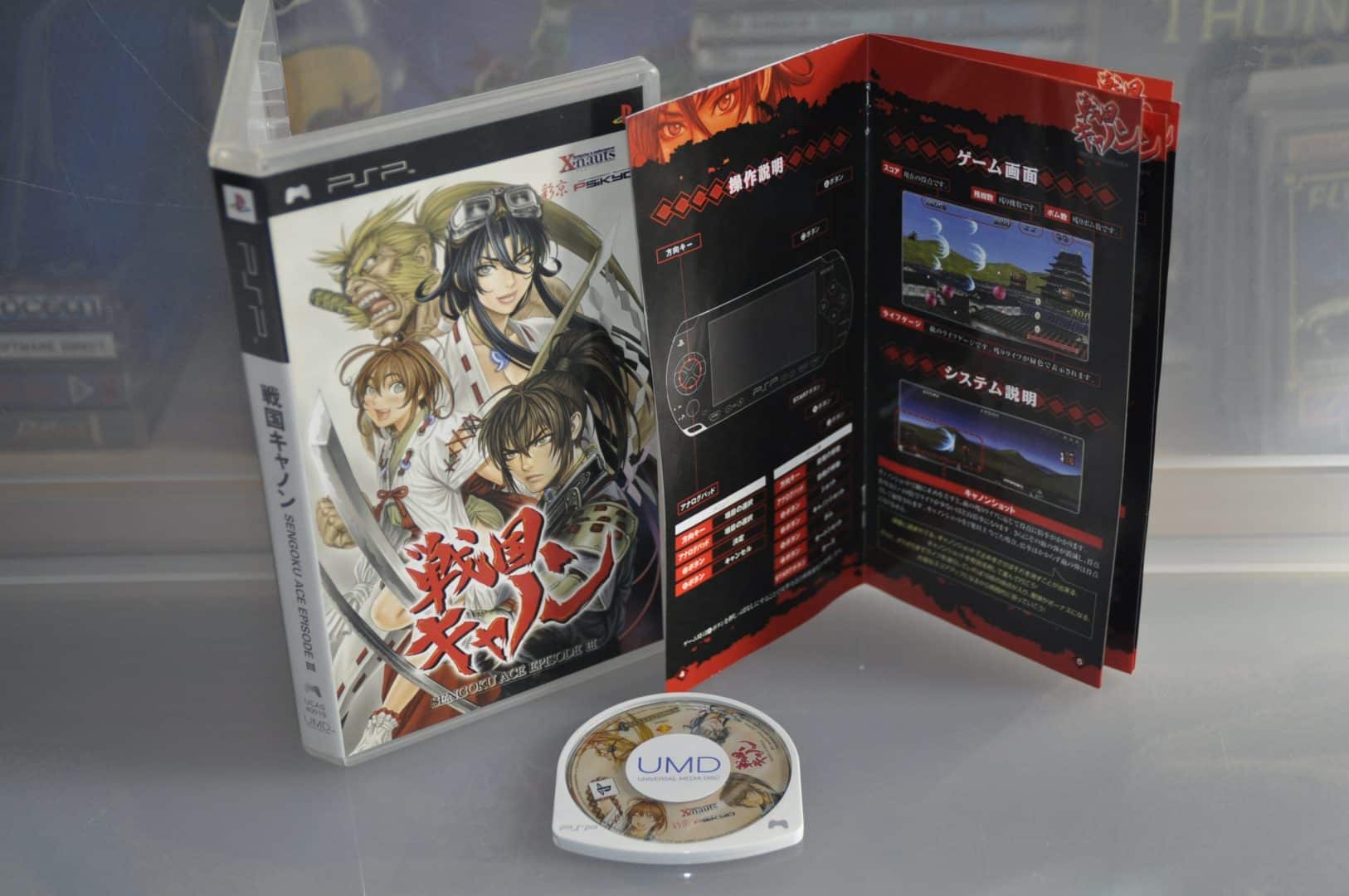 I finally fixed my camera yesterday so there will be an update soon when i get around to upload new pictures soon but for now, you will have to settle with these dark and sometimes blurry cover shots.

Pretty cool to see that this game came with a full manual in colour and four of the pages are actually in English.

Sengoku Cannon is one of those games that brought very little new to the genre but everything that it does is really polished and good. It feels like a true arcade shoot em up from the very first second and it got that thing that makes you want to play it again and again and again and again and again……. Endless fun to be had in a very simple way without going crazy with effects and graphical brilliance. A true gem and a must-have for every PSP gamer and collector out there. 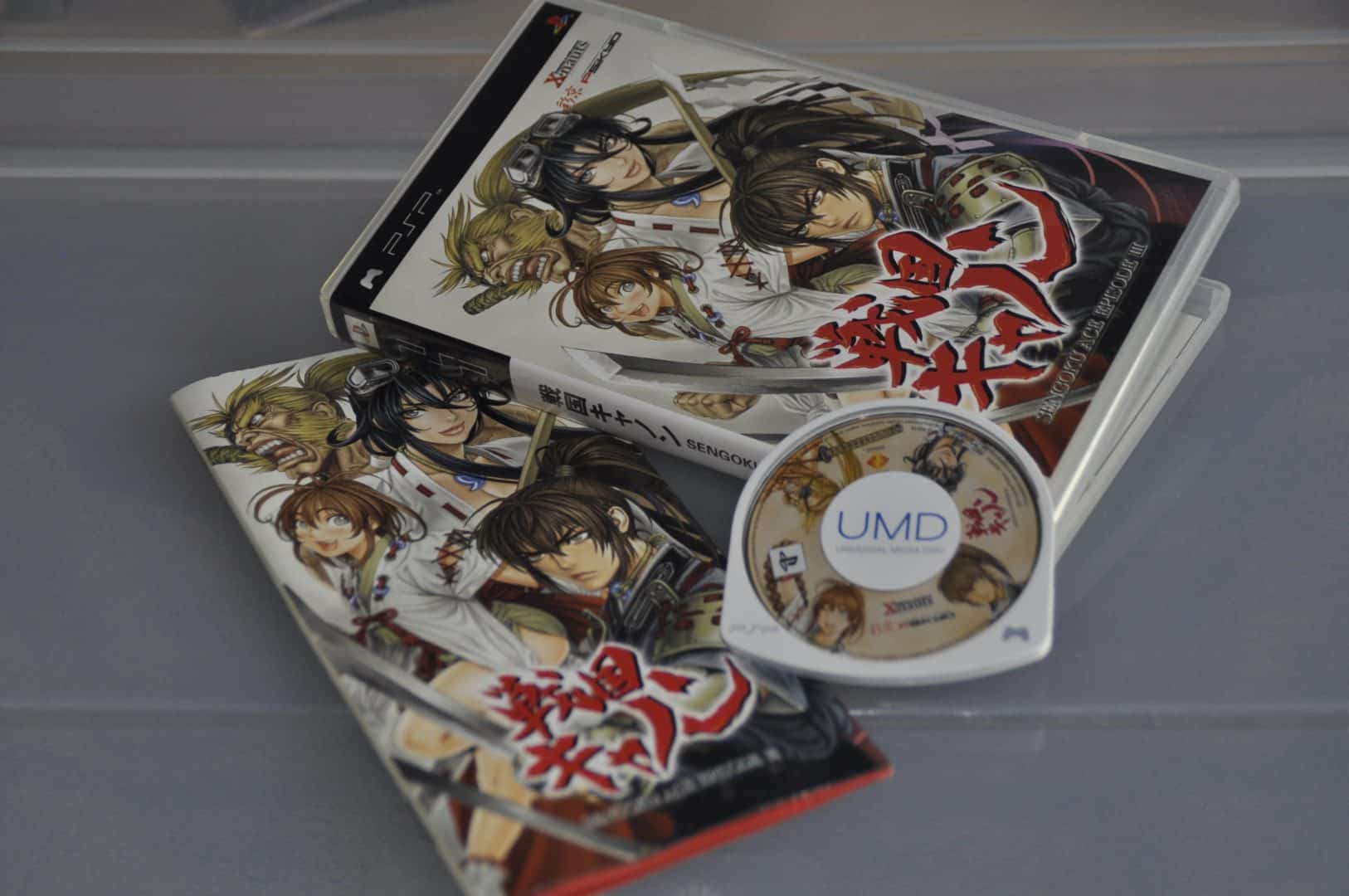