Wendetta 2175 always comes up as a wildcard when I show my game collection to Amiga friends and it somewhat still baffles me that so few people actually managed to secure themselves a copy of the game.

No, this ain’t one of those rare unknown games that are crap and never should have seen a commercial release.

Wendetta 2175 is actually a rather good game that was released at the wrong time.

Wendetta 2175 came out in the summer of 1996 and was from a Hungarian team called Vortex Design and it was their only Amiga release by the looks of things.

I had followed the progress on the game through friends and connections in the team and the hype had been through the roof for quite some time before it released, sadly the game got out on the BBS’s before my pre-ordered copy arrived and I seem to remember a certain .nfo file stating that this was the sequel to SUPER STARDUST, if that was the hype-train then this is most likely why the game is so rare and unknown today as it bears very little resemblance to that series except the tunnel sequences.

Wendetta 2175 is a 1 or 2 player co-op horizontal shoot ’em up title at heart but it decides to grow into a tunnel shooter and a Space Harrier type of game as it progresses further on with game mechanics and styles changes drastically between levels, the co-op element works good and the shooting does feel rewarding and fun.

Wendetta 2175 ain’t a typical showcase title but what it does it does with a pretty good effort thanks to the hard thumping techno/trance (some pop too) music by Dénes Nagy (+ SFX at the same time) and its pretty fun to play too if not a bit too chaotic for some.

If this game had come out 2-3 years earlier then it would most likely have had quite a few fans out there (and better sales for sure) but instead, it ended up in this “The Games We Never Talk About But Should” category which I hope will make more people aware of some of the more unknown games out there.

Wendetta 2175 has also turned into freeware too which means you can finally also download it without any hassle or whatever, you can download it from these places:

Wendetta 2175 is smooth, technically advanced, frantic and downright mental at times, the amount of objects that are thrown at you is most likely the most you will ever see on the Amiga and best of all is the variety of weapon upgrades that help make the game feel less repetitive.

The game design in terms of objects is questionable as it is very random and utterly bizarre at times, you will see cogs, stuff, yellow mushrooms, cheese(?), bones, asteroids, spaceships, crabs, statues, skeletons and whatnot in space but for some reason, it is ok, as it works because of there’s just so much going on at the screen and it is so blistering fast without ever seeing a slowdown. 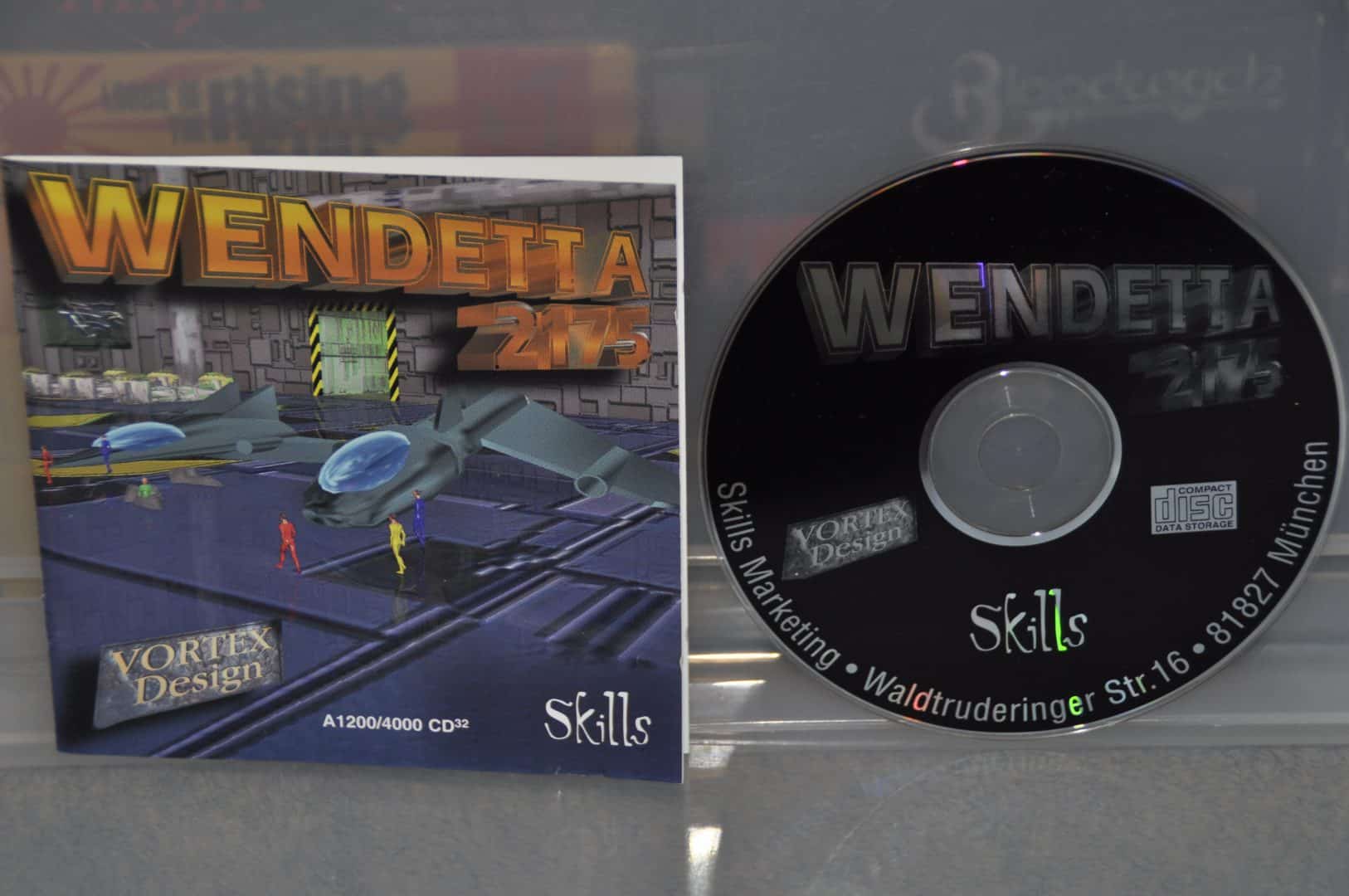 Wendetta 2175 is one heck of an impressive Amiga CD32 game, there are a bunch of hardware trickery going on but maybe most of all is that it is both a visual and audio feast for the fans of the genre. The game tries nothing new in terms of game design and whatnot but it manages to entertain you nonetheless and there is something for everyone here as the game got a password system (for levels and cheats) and that 2 player co-op certainly helps for people that ain’t too keen or skilled to play these type of games alone.

Thanks to Hall Of Light for the screenshots.  The box shots are from my own collection as always.