Today’s game is one you most likely have heard a lot about but never really given it the chance it so very much deserves, yup, welcome to another The Games We Never Talk About (But Should) write-ups, the game I’ve selected this time is no other than Sensible Software’s highly critical yet never talked about Wizkid from 1992.

The clever weirdness kicks off as soon as the game starts really with a really fun intro where Wizkid conducts a music piece timed together with animation.

“Bleurgh, I tried it once and it gave no meaning so I switched it off“

The critics loved the game, the reviews ranged between 75 and 94 across a very huge list of reviewers of no less than 14 magazines which is rather unusual for a game released in 1992, the META SCORE for this game ended up on very good 89 out of 100%.

So one gotta ask, how on earth did this game end up being so obscure?

The training section might be partly the reason why people switched the game off after a while, B.D Snail is a pretty good as a piss-take (on you probably know who), and the whole “learn how to play the game” thing works for about 3 levels in when it turns into an adventure puzzle game with minimal clues to some really big off-beat humor stuff which requires the player to think out of the box more than ever before.

I have no idea what Sensible Software’s Chris Yates was thinking when he made this game but I have an odd feeling that the team sat around a table at the pub saying random shit to each other and taking notes, by all means, the game is brilliant but they could have included a few examples in the training (IS THAT TOO MUCH TO ASK FOR? HAHA).

Another brilliant early puzzle (with no meaning at all, mind) before you solve it is they get enough money to buy a carrot + stick (from a flying balloon shop) to feed it to the mule so that you can ride it and jump to clear a gap to reach a gumball machine on top of a ledge (and that needs a token btw.. ARGH!).

Seriously, who or what came up with these ideas? Must have been some brilliant minds for sure.

It all makes sense in an obscure way when you think about it, but oh boy does the game mindfuck you a lot while it pesters you with puzzles that you haven’t even got a clue that it is even a puzzle, to begin with.

Seriously this game is so out of the normal loop of games that once you get the hang of it, well to put it simply, there’s no game like it out there and that is just sad as this should have been a whole series of games really.

The thing that I struggled with at first was that I had to buy stuff from a shop (a balloon) that only appears every now and then, so you have to complete levels to get coins to buy stuff with and the stuff you buy will help you on your quest (if you buy the right stuff anyway…).

A small hint that will help most people out there is a glitch(?) that can ultimately give you infinite money, just buy stars with your money and once you reach max stars (5) then you will make money by continuing to buy stars (if that sounds familiar, yup just like a certain money glitch in Moonstone).

Seriously, Wizkid is so out of this world that it has to be played by everyone and that is even if you play it with a god damned walkthrough.

Everything with Wizkid is excellent in my opinion, the laughs it gives repair the very few niggles and annoying puzzles you meet, it may not be all that logical to most but once you figure out that the game is supposed to screw with your brain is when you start to think out of the box and maybe most of all relax a bit more and enjoy it for what it is.

One thing I always thought was that Wizkid was an Amiga exclusive, dunno but I probably knew but always thought that such a weirdo game had to be only for the Amiga, but Nah, it came out for the Atari ST and the PC too (WTF?).

It is far between games like these, it was an AAA production for its time and they managed to make it into a proper cult classic which sadly never managed to sell to the expectations, heck it didn’t sell enough to get a widespread Hit Squad release it seems, I have only seen the Atari ST box and my google searches have found no Amiga version of the Platinum Hit Squad box either, but yes I’ve been wrong before.

I agree with the advert in so many things, WIZKID THE ESSENTIAL PURCHASE is one of them.

A young me never did understand why there was a woman on the in-game, I wonder if anyone of you did :p

The most refreshing game in years / Amiga Power.

“Handle With Care – Kidz On Board”

The advert for Wizkid is just as loony as the game, well done to OCEAN for pulling that off.

Wizkid is not just funny, it is innovative and tries to do things differently and it succeeds in just about everything it tries to do.

How Did I End Up Loving The Game So Much Then You May Ask? 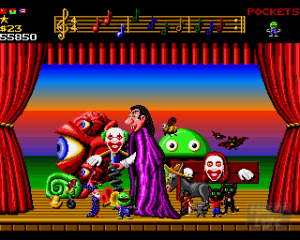 Well, I have always loved the game but I never managed to finish the game until I met my current fiance, we played this game after Super Methane Bros (which I blogged about a few days ago), and as you may have read that was 21 years ago, she loved the game from the first second she saw it and while it was not a multiplayer game we still played the game on turns as we progressed through all the puzzles and action parts.

At the time we also watched a lot of old English comedy stuff like Red Dwarf and Monty Python which fit perfectly in with this offbeat game, to be honest, we managed to get past the place I had been stuck before (a puzzle naturally) and at the time I thought that I was close to the end proved to be wrong, very wrong.

We must have played it for months really and I think it was just as funny all the way through with a quite bizarre ending.

Who would have thought that I and my fiance would end up playing an Adventure / Roleplaying arcade puzzler romp together?

What do you get if you send all of your team to the local pub while still being at work and offer them free beer for every silly do-able thing for a game idea? Wizkid of course.

Wizkid is easy to play and hard to master, the puzzles will mess with your brain but in the end, you will just love it, not only for its crazy out-of-this-world humor but also for its innovative game mechanics, puzzles, graphics, and music. Wizkid is a proper cult classic that could have benefitted even more being an Amiga exclusive so that it had used more of the special hardware but all in all there is some brilliant technical stuff too as well as remarkably well-polished stuff that will please most of the gamers out there. Wizkid is probably one of a kind, I have never seen anything like it before or after it and it is one of the games that you just have to play, that is even if you are not into roleplaying/adventure/action arcade platforming games. Think of Wizkid as half Dizzy, a little bit of Monkey Island, and the rest is a crazy platformer-inspired game.  Don’t dwell on this one, go get it right away!

Thanks to Hall Of Light for the Screenshots.