First of all, I have not received my A500 Mini yet which means I had to get help from others to do a hype article for this machine that hits the market in just 8 days! , Yeah I know, but I had to do something.

This time I had to grab some pictures of “The 8-Bit Guy” awesome review video on YouTube, I recommend you give him a like and subscribe (after reading my little article here, naturally :p), I hope he got my message about permission and that he ain’t too pissed at me right now. 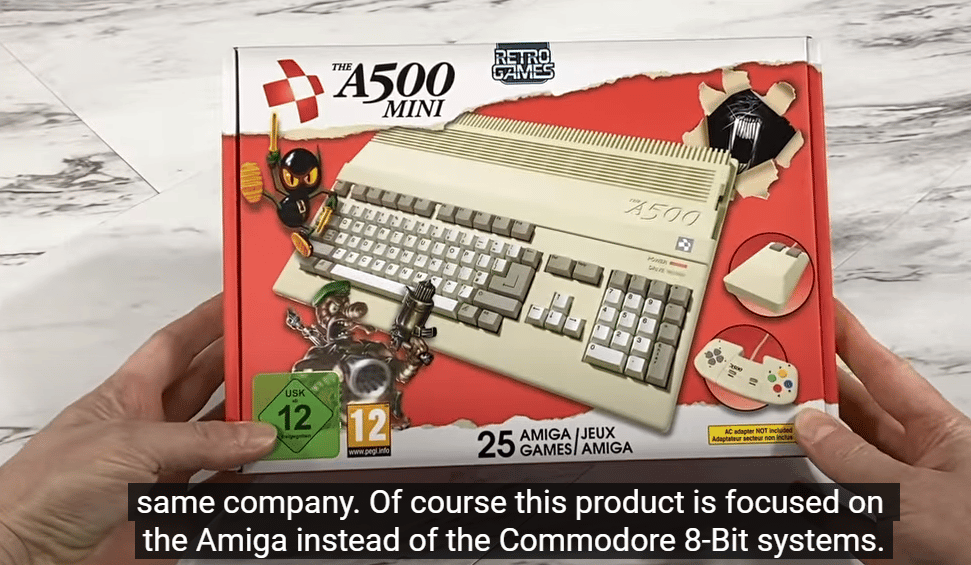 The Amiga is finally back in the mainstream shops, yes it might only be an Amiga Mini but if it has the same impact that the C64 Mini/Maxi had on the actual market and communities then this will be a very positive start of something much bigger for sure.

The A500 Mini comes in a pretty awesome box which to me at least looks like something I would put up on my shelf just for bragging rights.

“Awesome box for the collectors” 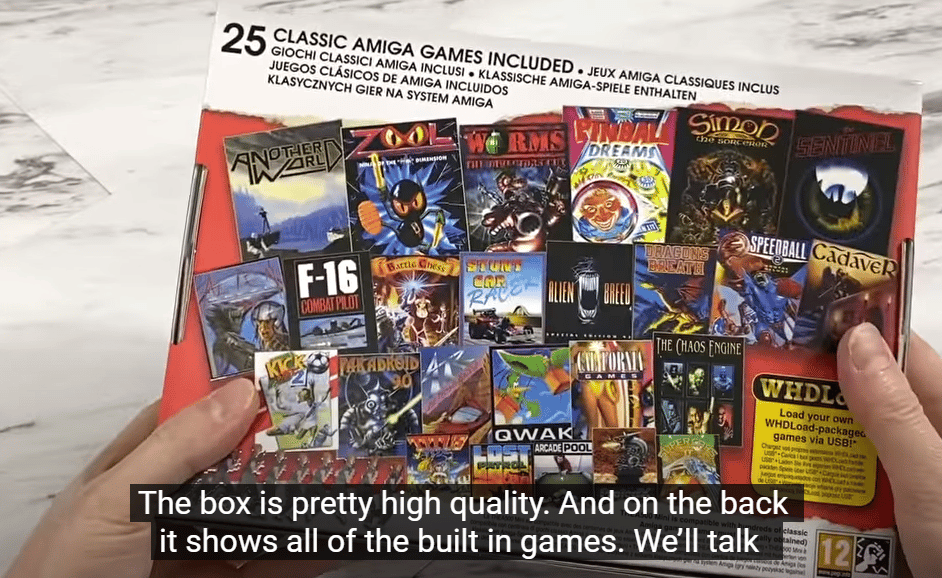 Here you can see the backside of the box and yep, this is all the included games too. Notice how it says Whdload on the right-hand side there, yep the A500 Mini supports Whdload *.lha archives directly from a USB drive of your choice, more about that shortly as first we need to talk about the Mouse and controller included.

“The A500 Mini supports Whdload archives out of the box” 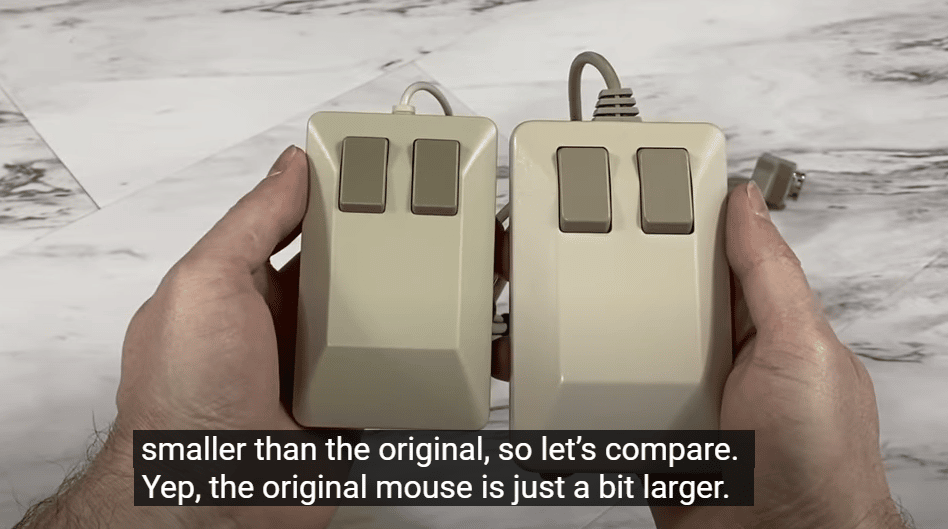 The mouse included is a TANK USB mouse and as you can see it is a bit smaller than the original A500 Tank mouse but other than that it is pretty much the same, the best part is that it is also fully useable on your USB enabled device like your PlayStation 5 or PC or whatever.

Oh, one more thing, have no fear, this new mouse doesn’t have that Ball that you have to clean a million times a day as it has an optical light instead :p 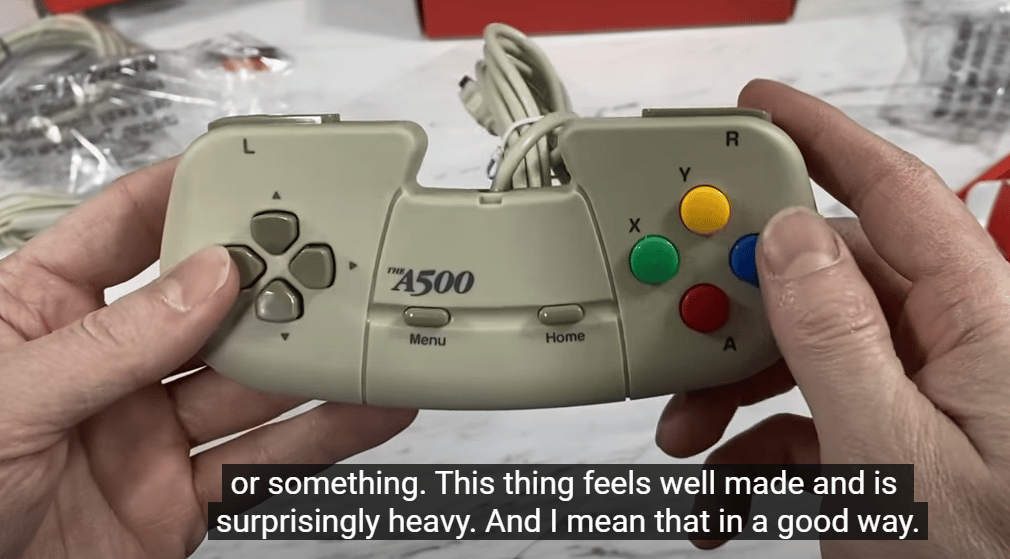 The controller included does bring back some memories (CD32 Pad), it looks great, and hopefully, it lasts longer than the shitty joystick that we got with the C64 Mini a few years back.

Sadly, I have no idea how it works this one but when I do a review then I will go deeper into the build quality (after excessive testing first of course).

“Both the Mouse and Pad can be bought separately” 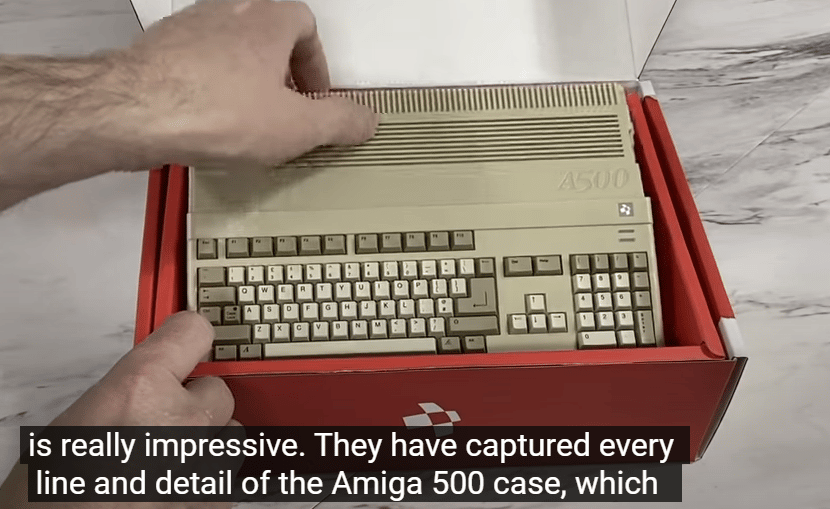 Look at that beauty, the only bad thing is that the keyboard doesn’t work. The attention to detail looks to be totally worth it though. 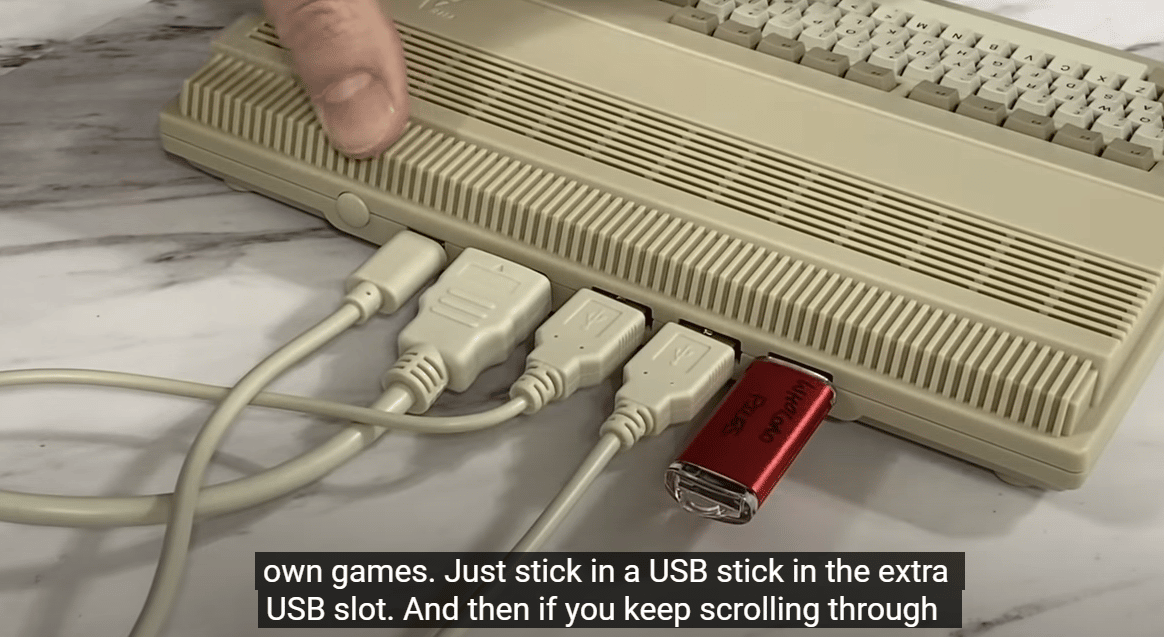 Here you can see the backside and how the 8-bit guy has connected his USB pin (not included in the package btw), the other stuff connected is Power, HDMI and the two USB connectors are the Mouse and controller Pad.

I have no idea how this works with Saving games/high scores and such (yes, Whdload supports that now), but I will test this closer as soon as I got one of these Minis myself.

“No USB Stick Included In The Box” 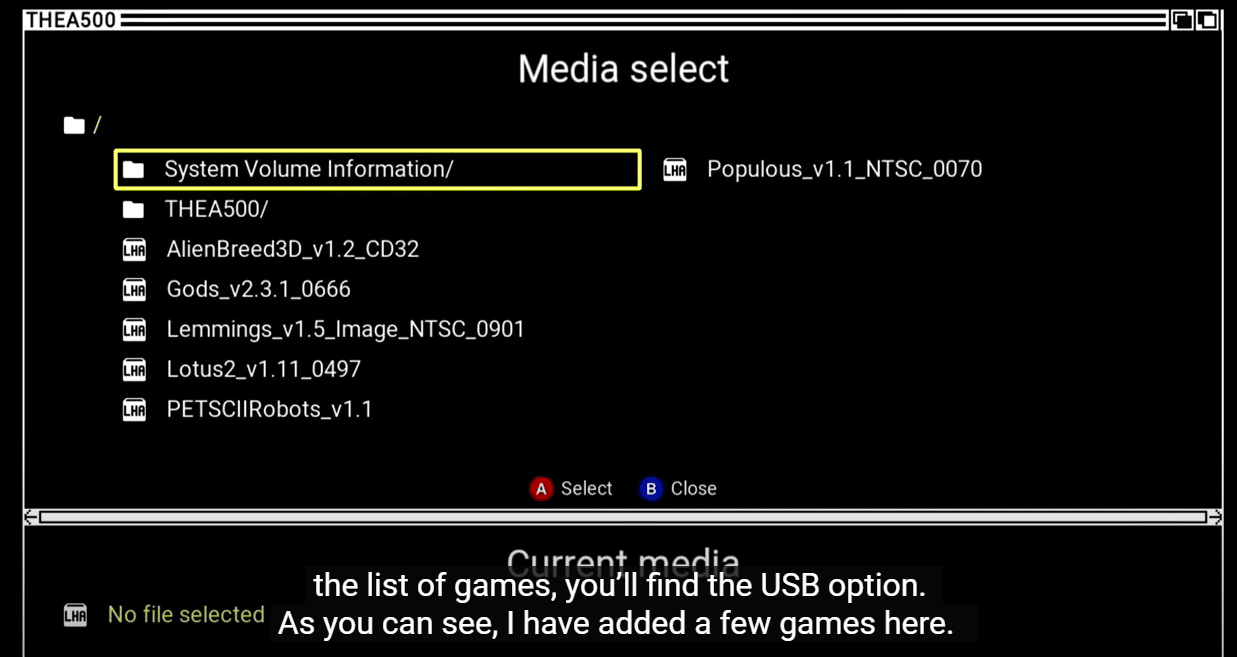 This is what the USB Menu looks like if you use your own games via a USB unit, alas nothing like the rather smooth-looking game menu that follows the included games that comes with the A500 Mini itself. 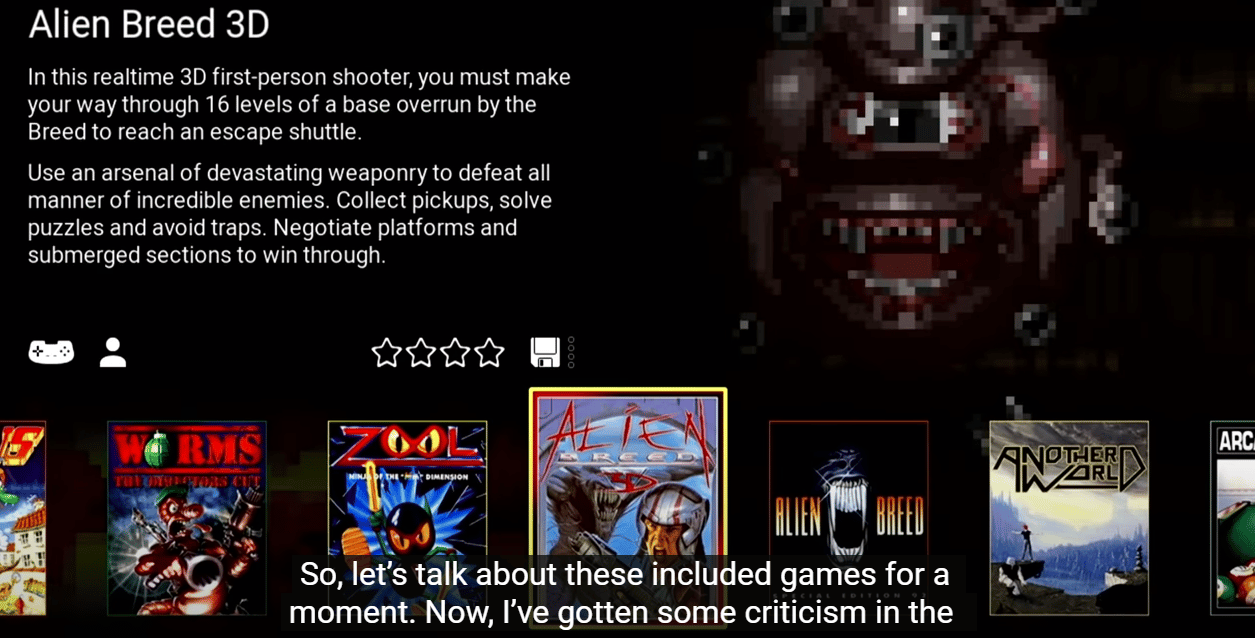 This is what the main game selector looks like, in my opinion, it is a least very cool and I would have wished we could have done such a menu for our Whdload games too.

A nice feature is the controller needed icon as well as how many players the game is and you even got a rating system.

“25 Awesome Games Included In The Box, Including The Best Worms Game Ever Made – WORMS DC” 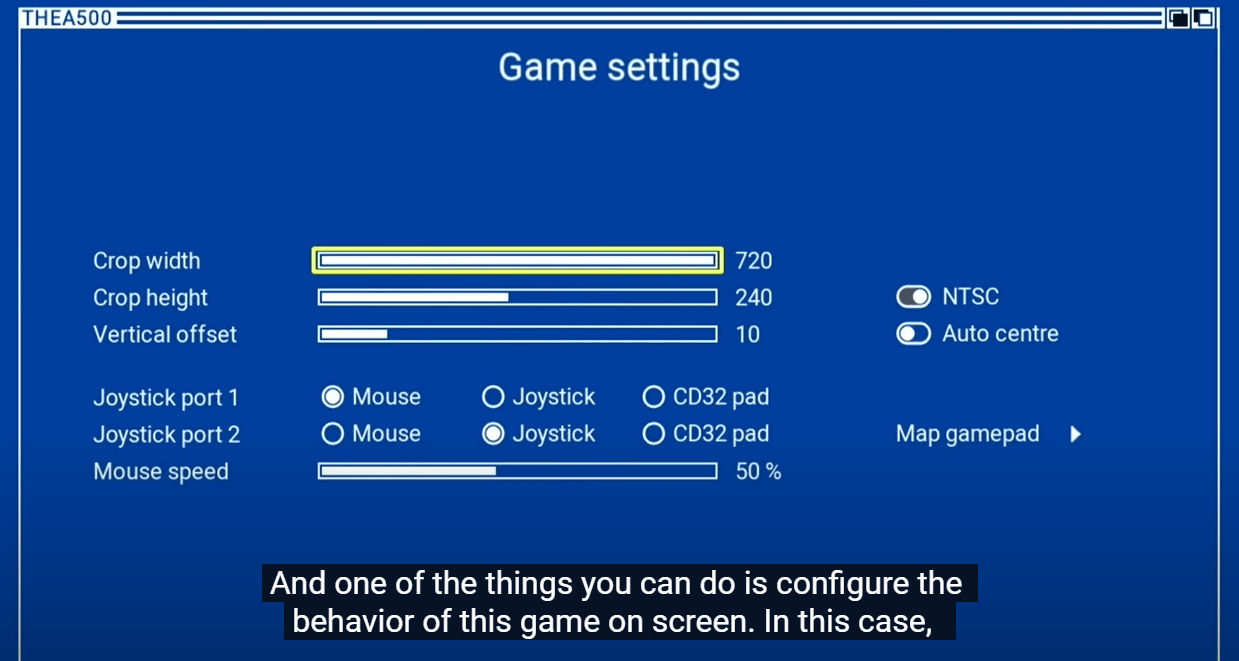 There’s a menu for display and joy port selector etc too, you can also configure the buttons on the pad itself which helps a lot for me at least as some games are a pain in the arse with the CD32 where you have to use the top buttons for stuff you use often, etc which is very tiring on my old fingers/hands. 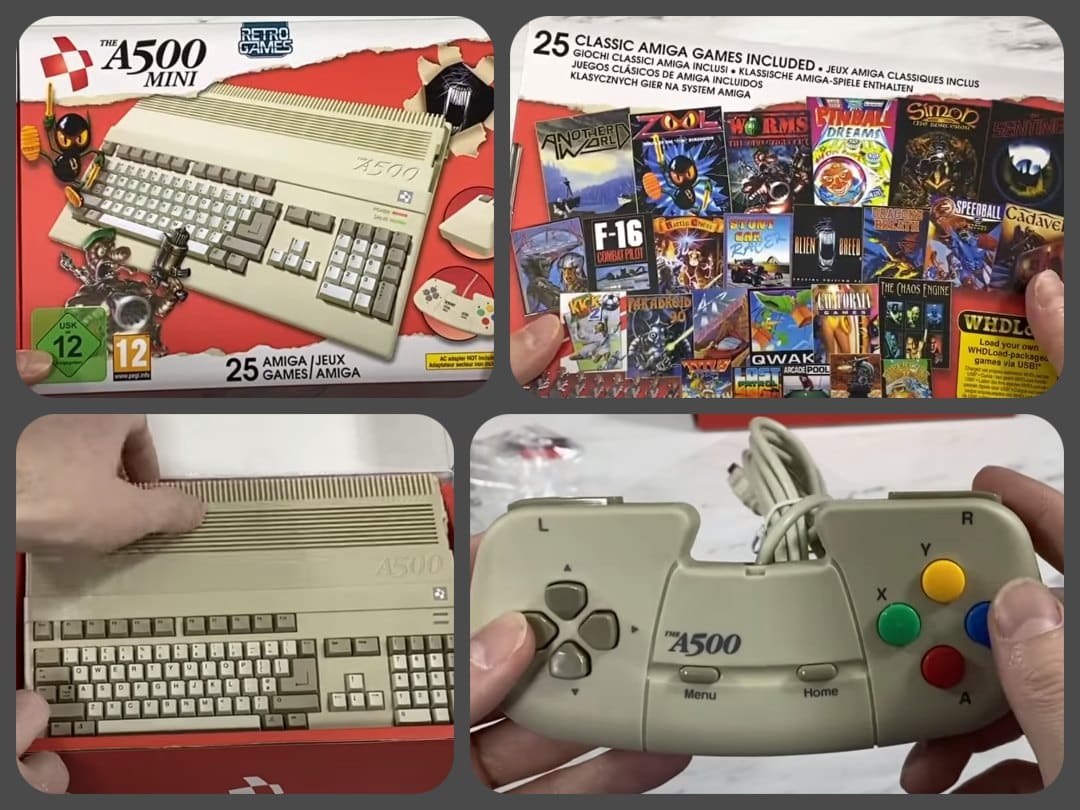 The market for the A500 Mini ain’t really for the Amiga nut per se as most probably got a PI or a PC with WinUAE by now but I just want something right out of the box that is complete and something you just hook up to the TV and it works.

The Amiga Facebook groups have been glowing for a day or so now, people bitching about the price and others complaining about the games, others complain that all these games are free downloads anyway so why should we pay license fees in this box, etc, seriously guys, this out of the box experience ain’t for you, it is for everyone and people that don’t pirate stuff or whatever, just get over it.

That’s it for now guys, below is the video that I loaned pictures from and as said earlier they come from the wonderful “the 8-bit Guy” which I can easily recommend you all to check out.