We have blogged about RESHOOT-R a few times already now and that for a reason, but now the time has come to write a few words about one of the 3 editions available to buy now.

If you want to know more about the game itself and what we here at AmigaGuru’s Gamer blog thought about the game then feel free to check out this review.

I got a review copy a few weeks before the game released but that was “only” a digital download which mean that I never did do a box review of any kind for the game itself, in good tradition I went out and grabbed a copy of the game from Amigashop/APC-TCP  to show my support (but also to secure myself one for my collection) the RESHOOT-R SIGNATURE Edition of the game. 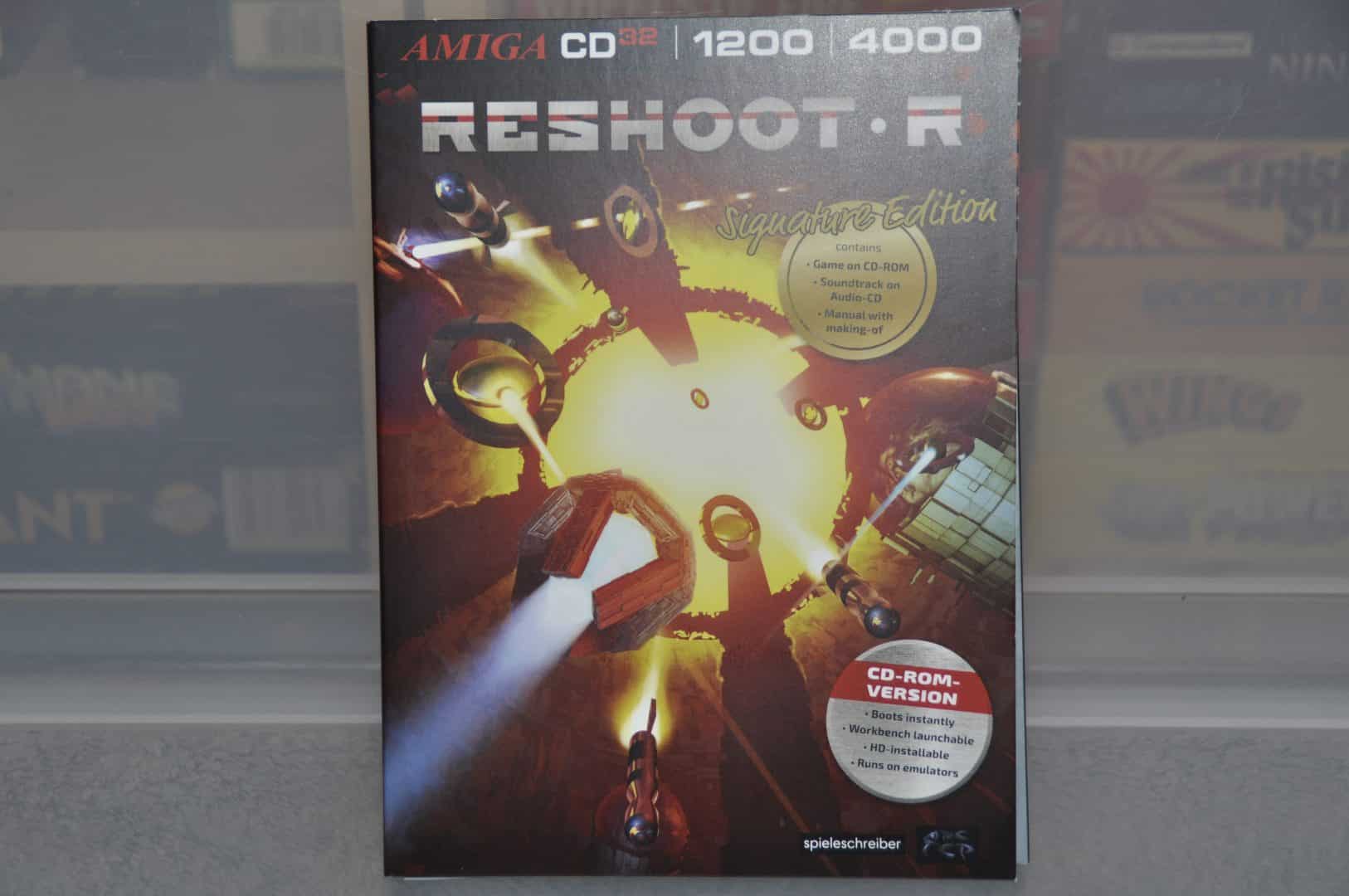 There might be a review of the other versions here on the blog sometime in the future as i plan on getting those too.

Ok, Over to the unboxing then…

The Box itself is rather special as it is made out of cardboard and it is the size of a DVD case although not like those traditional paper cases seen on some of the movies out there.

The art used on the front is the same as seen in-game and it has to be said that it looks amazing out the printed box, it screams LOOK AT ME! 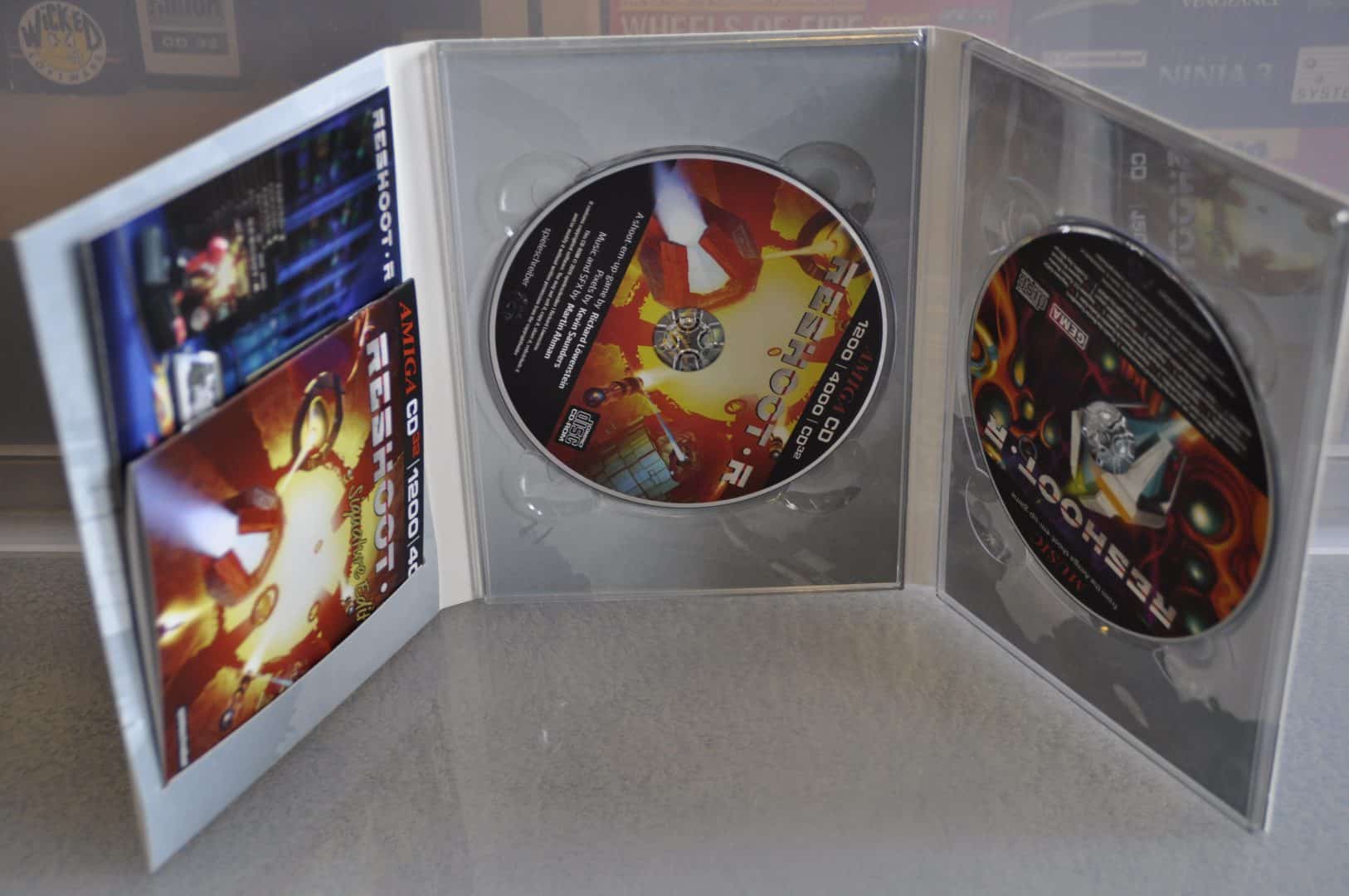 This Signature Edition carries 2 CD’s as well as a compartment for the manual and a “signed postcard”.

The use of colours on the inside of the box really shows how much thought has been put into it all, more about this later on.

When I looked for pictures on the web it looked like this was a CD32 sized cover and to those of you who thought the same, well, AmigaGuru’s at the rescue yet again. 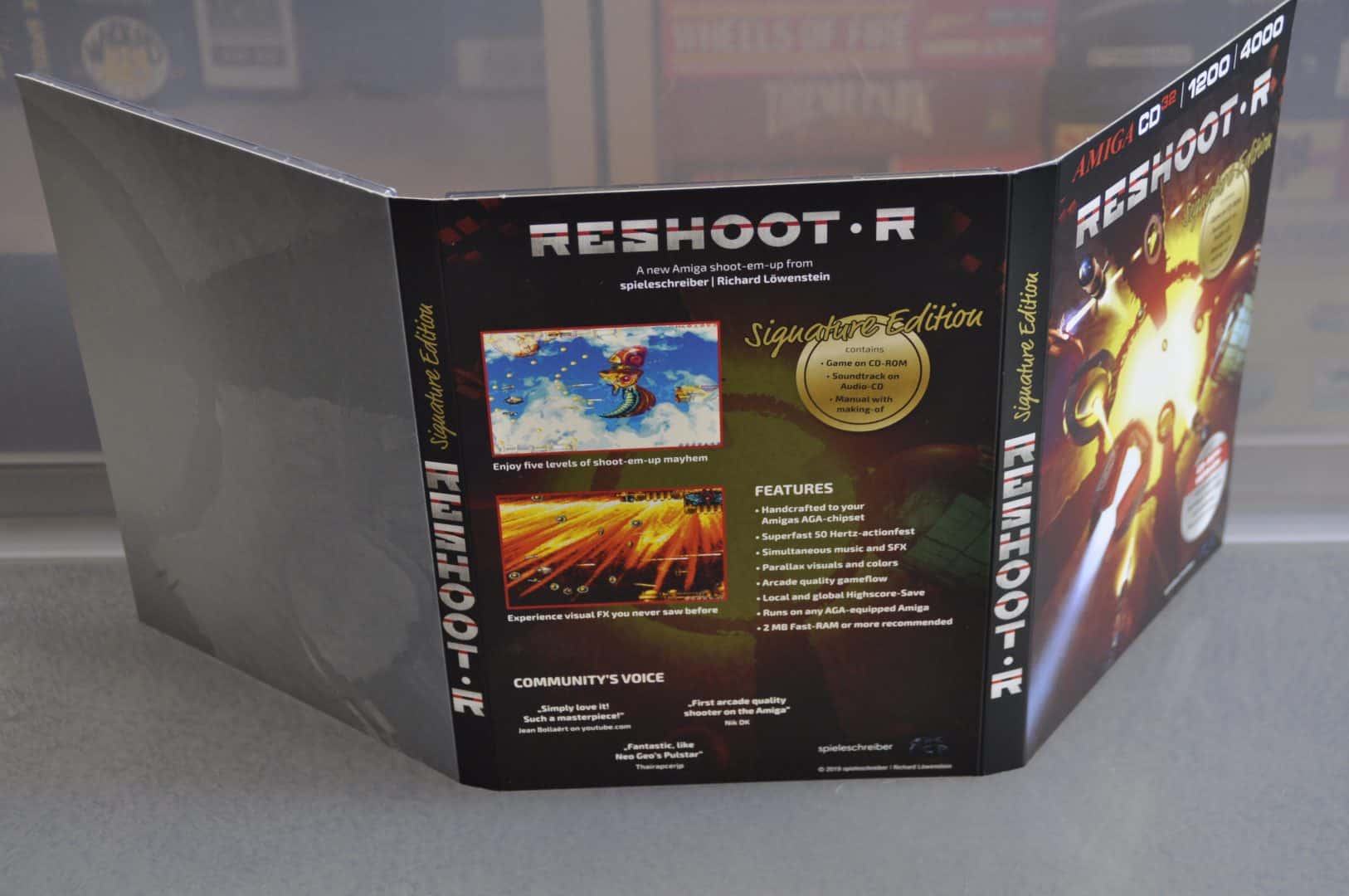 Here you can see the front and the back and the innards, everything down to the spine looks fantastic and needless to say – APC-TCP and Spieleschreiber have done a fantastic job together here and produced one heck of a cool box. 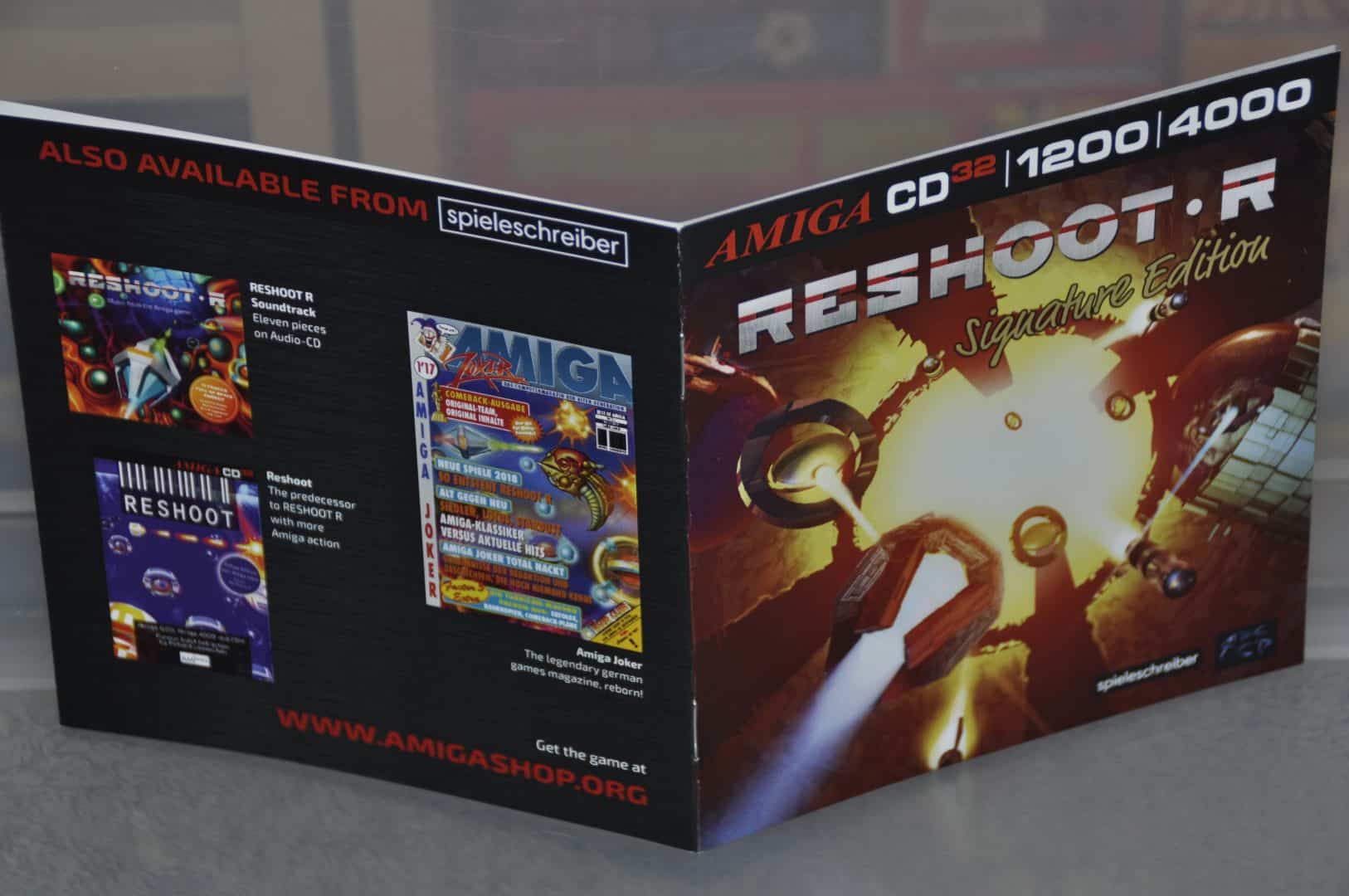 There’s a full manual included too, 16 pages in full colour with some rather nice things (more about that below).

The manual is printed in good CD32 styled tradition, it would fit in a CD Jewel Case but thank god that they went for this paper styled DVD case instead.

The manual is full of pictures and the print quality is really good too, the layout is professionally done as well.

There are some rather nice details about “the making of Reshoot-R” in here too, there is stuff about the community and also about things like “banging the hardware” and most (if not all) are well worth a read for pretty much every Amiga fan out there. 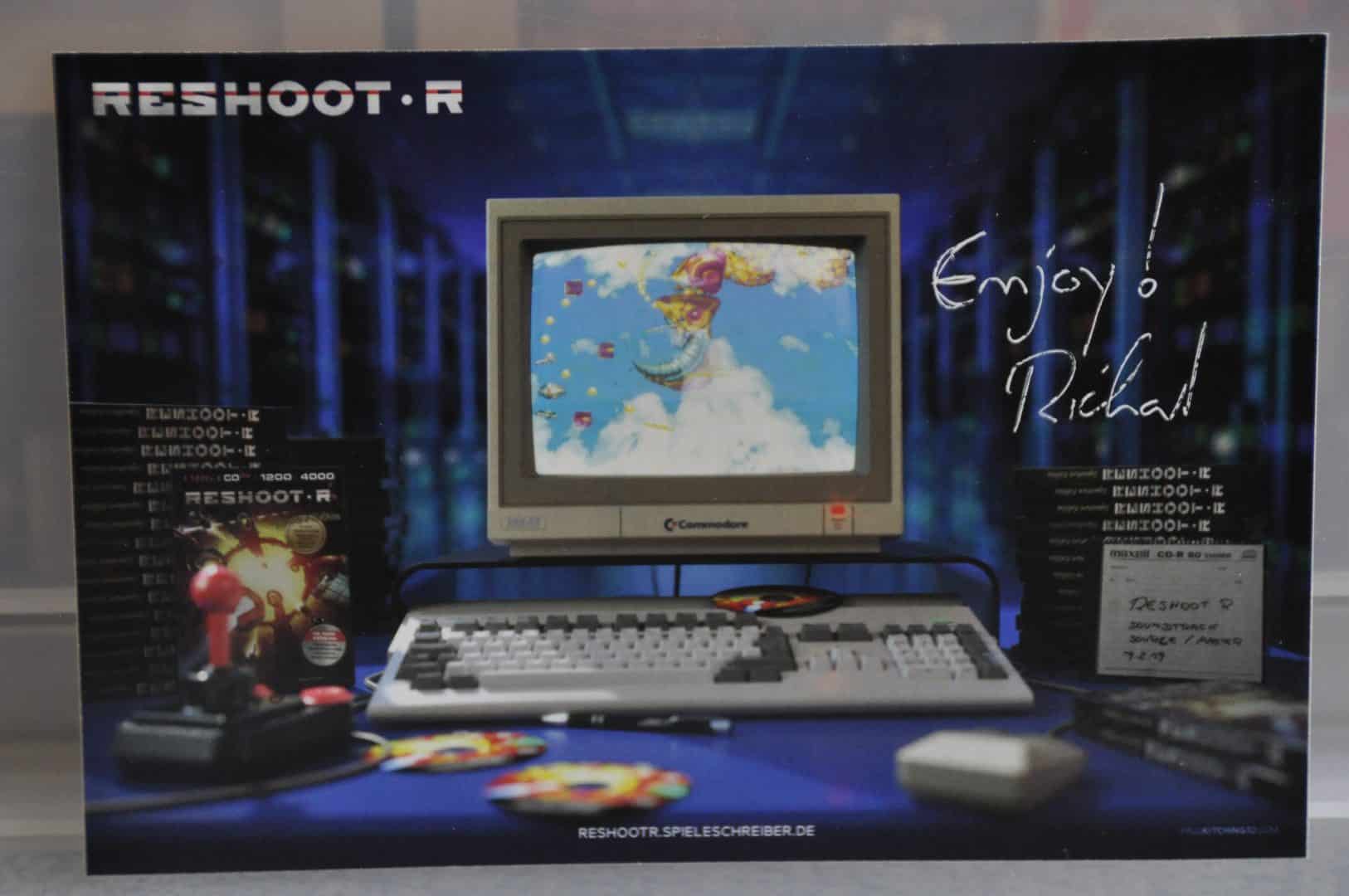 This postcard is included in the box too and I have to admit that I am a bit miffed that it wasn’t signed “TO ME” but then again, Richard haven’t got the time nor resources to do that personal touch to everyone, but with that said, I’d love one nonetheless Richard.. *hint*hint*. 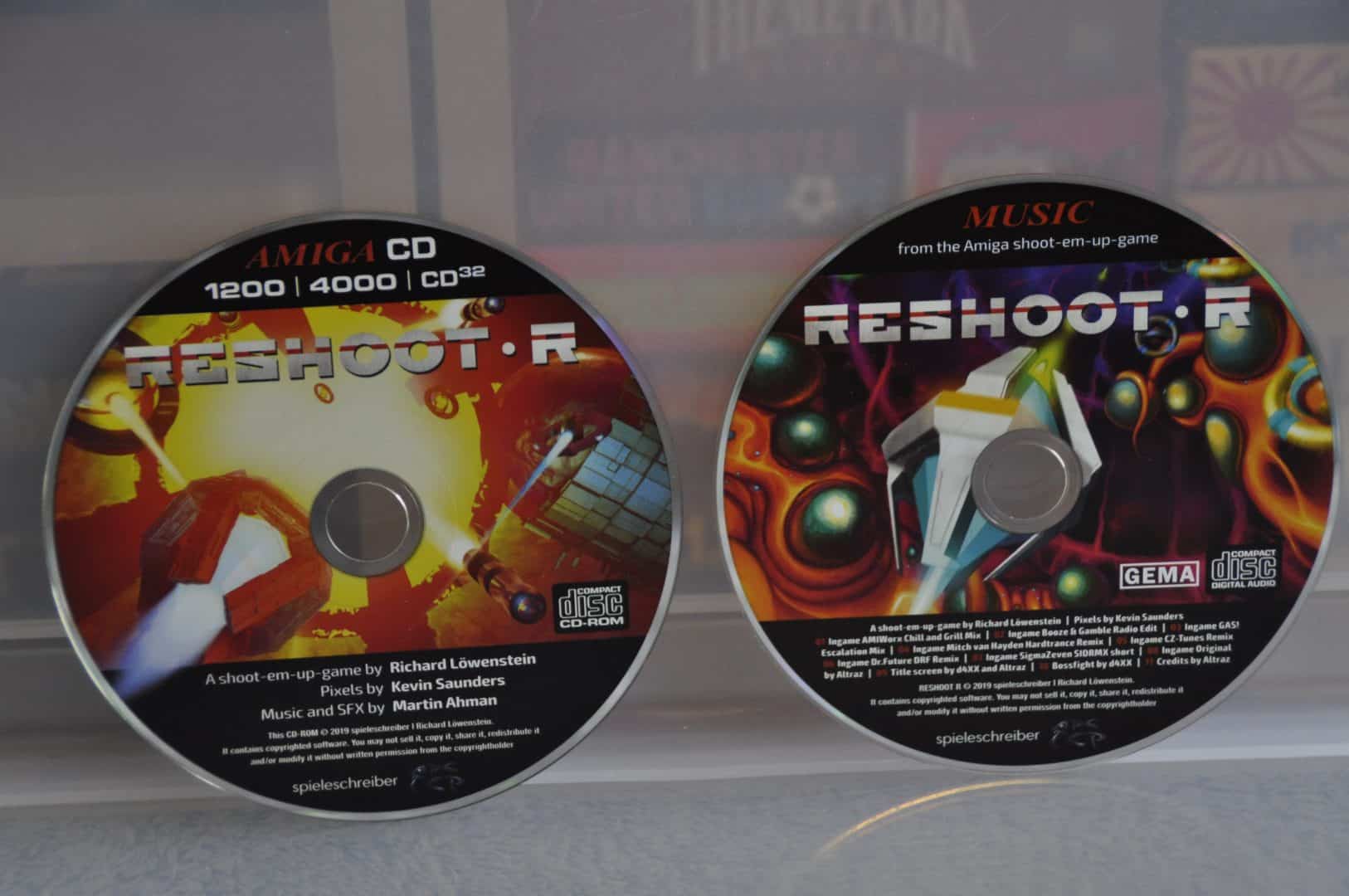 Two beautiful CD’s are included in the box, both are professionally printed and I love that they went all the way through here with doing two different looks for them instead of slapping a SOUNDTRACK label on one of them and GAME on the other.

The game comes on 1 CD and that auto boots on the CD32 and that also holds the other versions of the game if and when loaded in a CD operated Amiga/Emulation system.

The second CD is a music /OST/ Soundtrack CD for those of us who love playing music in our cars or whatever, the quality is flawless and well worth it over some *.mp3 files. 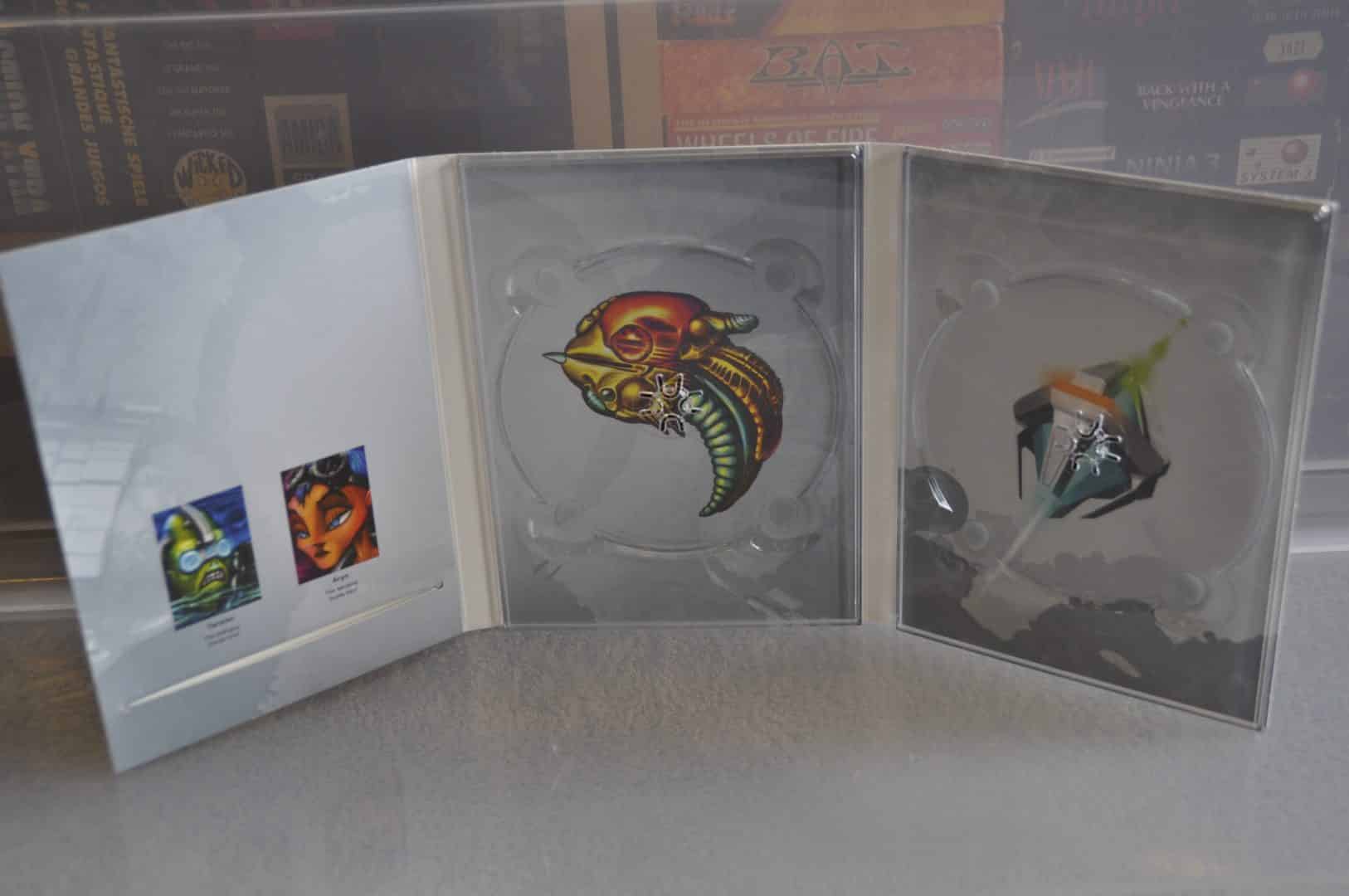 After you take out the CD’s you get to see the beautiful innards of the box, excellent use of colours yet again but most of all is the actual style and how good it looks.

APC-TCP,Alexander Wagner and Spieleschreiber have done a wonderful job here at doing a box that delivers the same top-notch quality as the game itself, everything is put together in such a way that it screams buy me and one that many collectors and fans will have a hard time to ignore on the shelf. If this is not a perfect reason to buy the game then I do not know what is, If YOU decide to wait for the PURE edition review then be my guest to do so, but please do not bitch or complain when the signature edition is sold out everywhere and only available at insane prices on Ebay or whatever and whenever you get your finger out of your arse.