XP8 is yet another of those late Amiga games that didn’t get the attention it deserved and therefore I decided to spread some more XP8 love here on the blog.

Weathermine Software had a short lifespan on the Amiga sadly, their first game was Bubble gun and their final game was XP8, both of them was technically good and offered things no other games on the platform had done before.

XP8 came in two versions, an ECS version and an AGA version and needless to say that the latter was superior to the ECS one with some really good tweaks and adjustments that made it the much better version.

The AGA version has a two-player simultaneous mode as well as 128 colour onscreen with shadows to boot, all this in a beautiful solid 50 frames per second which is the main differences between the AGA and ECS versions, with that said both versions play very similar and neither struggle technically and both look and play impressive on their respective formats.

Effigy hopped onboard as the publisher after Weathermine had tried to do some self-publishing without much luck. If the sales went any better with Effigy behind the wheel is unknown but Pinball Prelude remained quite unknown for a long time due to bad sales and they even reused the assets on consoles (a PlayStation 2 Pinball game) without people even noticing it, so we can only guess that Effigy didn’t really push all that much copies out on the Amiga over the years.

It is quite sad though as XP8 deserved to sell more than it did and it certainly belongs on more lists out there, but yup it was 1996 and everything and anything Amiga had problems due to the PlayStation stealing all the attention.

Superfluid gameplay, 50 frames per second, raytraced objects, lots of upgrades loads of boss fights and huge levels certainly made me love the game for what it was, it looked insanely good and fast but yes, the gameplay had issues with repetitive mechanics, sound fx and little to do beyond holding a button and trying to kill everything on screen.

The only negative thing with the game is that you can’t have music + sound fx at the same time and that the graphics don’t really make the game shine, the typical mix of genres (pixel and raytraced) for the era is obvious and it sadly destroy some of the wow factors, a full 2D old-school look would have been better for sure.

The boss fights may not impress today but back in 1996 this was state of the art when it came to Amiga stuff, there certainly was better attempts but never in the same scale and style as in XP8.

The amounts of bullets, the patterns and maybe most of all the super weapons and upgrades on your own ship took a lot of raw CPU power which means that it is even more impressive to look at when both you (and even your co-players) and the boss are shooting like crazy without a single slowdown in sight. 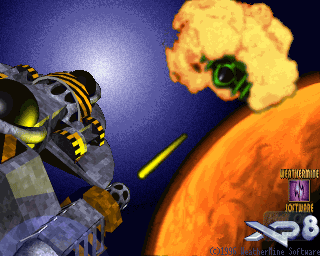 Screen shaking, huge explosions and an insane amount of bullets, 50 frames per second, 128 colours on the screen, shadows, overscan horizontal scrolling with locked vertical scrolling, loads of objects on screen, even morphing ones and many different sized enemies on screen at the same time make this one heck of a technical ride.

Oh and before I totally forget, the game features one of the most customizable options list ever in an Amiga Shoot Em Up game, you can adjust everything from the number of shields,auto weapon upgrades, controllers (including CD32 pad) and keys,your bullet strength, how often upgrades appear and even if you want to choose easier objectives instead of the already defined ones by default.

Another nice addition is that when you complete a level/mission then you will get a code and this will give you a new full set of lives/shields and the option to start from the next level at any time you want, even better is that you don’t have to use this code if you want to play more before switching it off so it is kind of like an infinite lives thing, at least by 199x’s standards.

A rather interesting thing is that if you play the game on a real CD32 then it actually looks for CDDA tracks (it plays and seeks through track 2 in the main menu among other things) which means that there most likely have been a CD32 version in the works at some point, i guess it is time to contact the developers to see if they have some information. 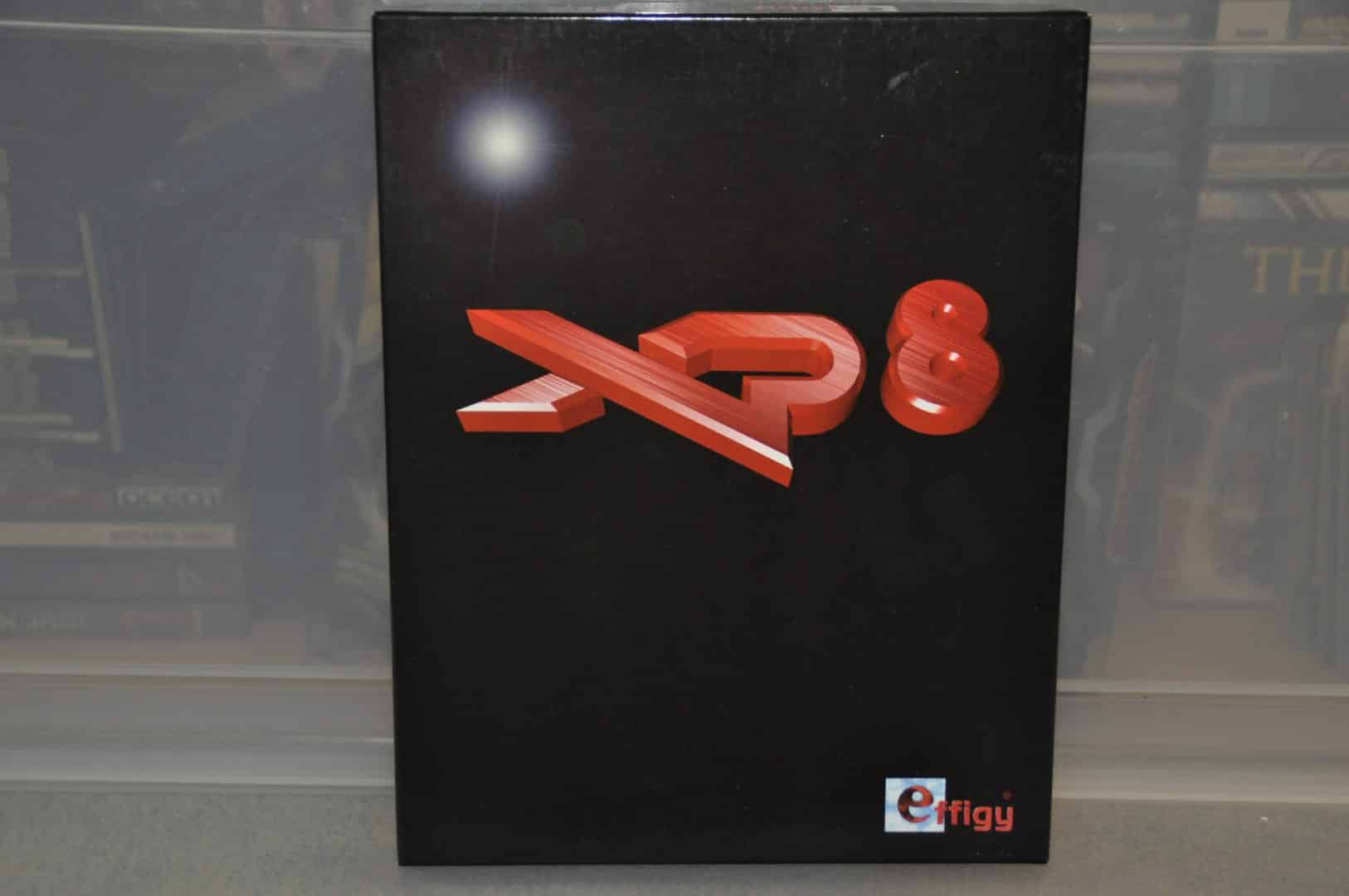 The version I got is the Amiga 500 box and I have been looking for the AGA version of this game since forever, i bought the AGA version from ISLONA in late 1999 or something and there was no box nor manual with it, just some floppy disks that looked like bootleg copies inside a CD cover…  I will check one day if I still have it, I sold a lot of fake copies to a guy in Germany many years ago and i fear this might have been one of them.

The A500 box does look great though, a huge black box with a really nice logo on it and that’s about it. 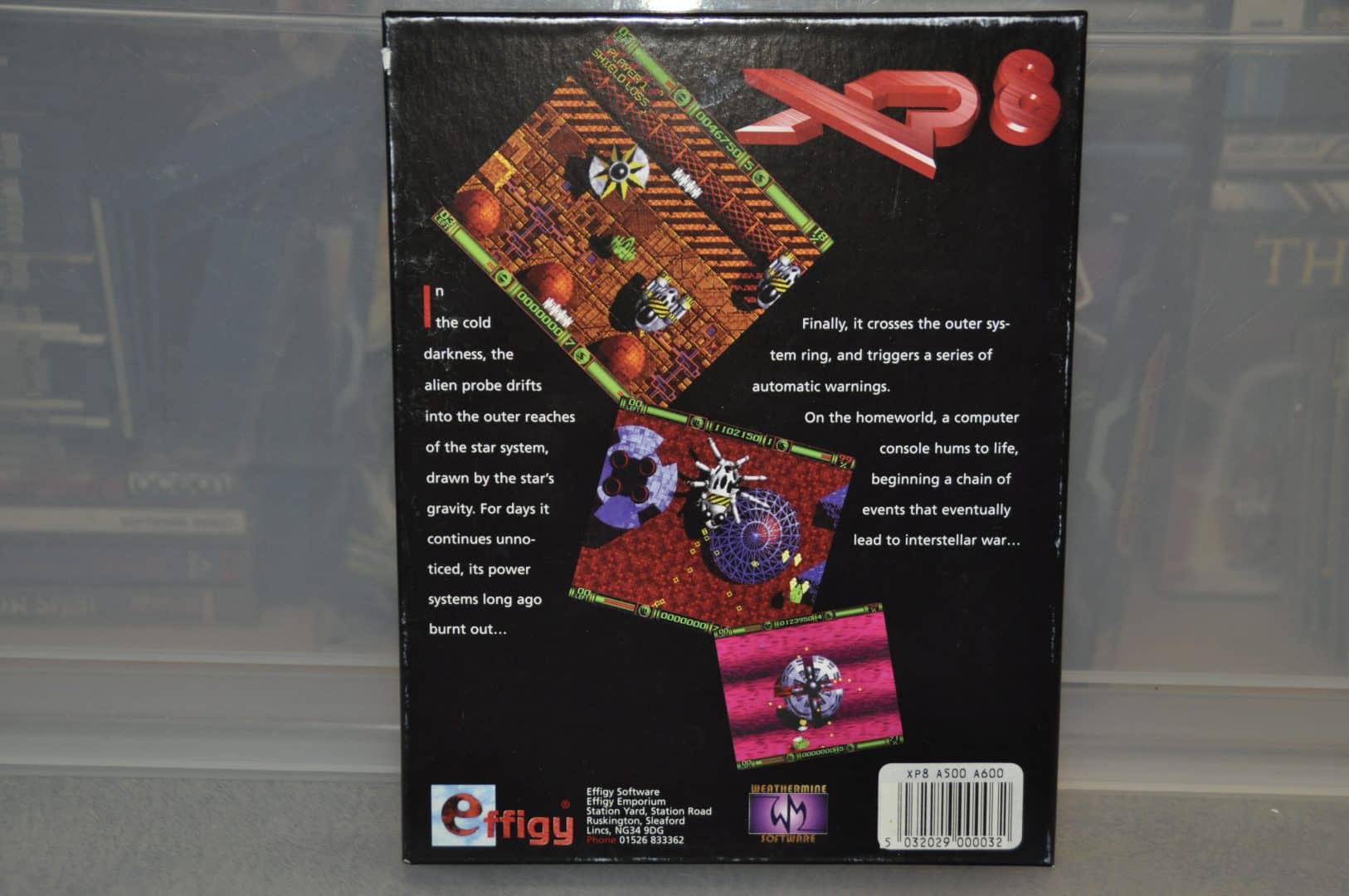 The backside of the box is also no letdown, funnily enough, two of the screenshots I used in this article is also on the box (well, the location anyway).

This was one of the last big box games for the Amiga, at least for a while…: SAD PANDA FACE:

The manual ain’t no looker and it is very clear that they wanted to save money on it.

It does the job and tells a few things the Cracked version or whatever won’t tell you (like they keyboard controls!) but that’s about it. 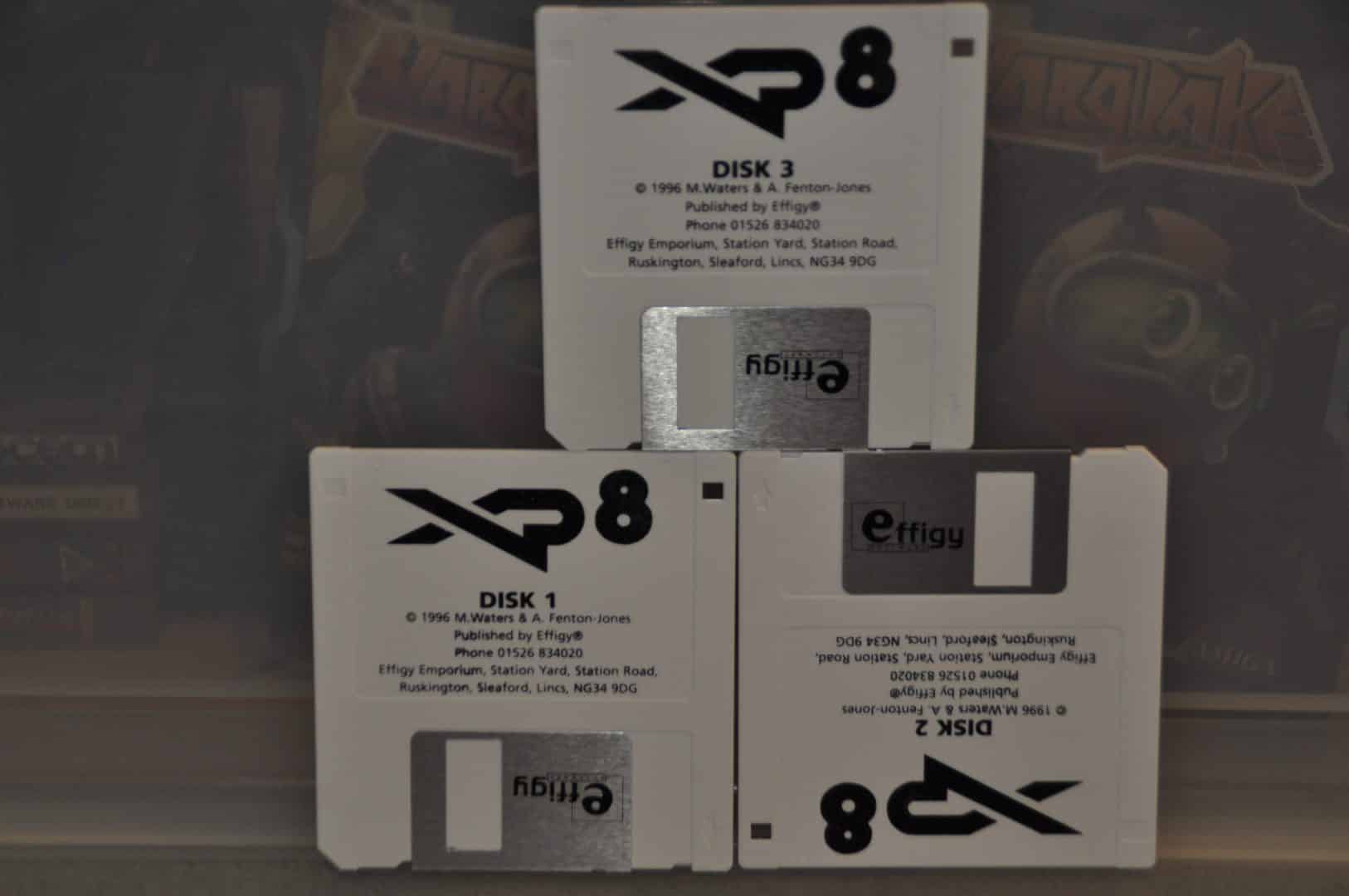 The floppy disks do look awesome though, the logo and design are excellent. 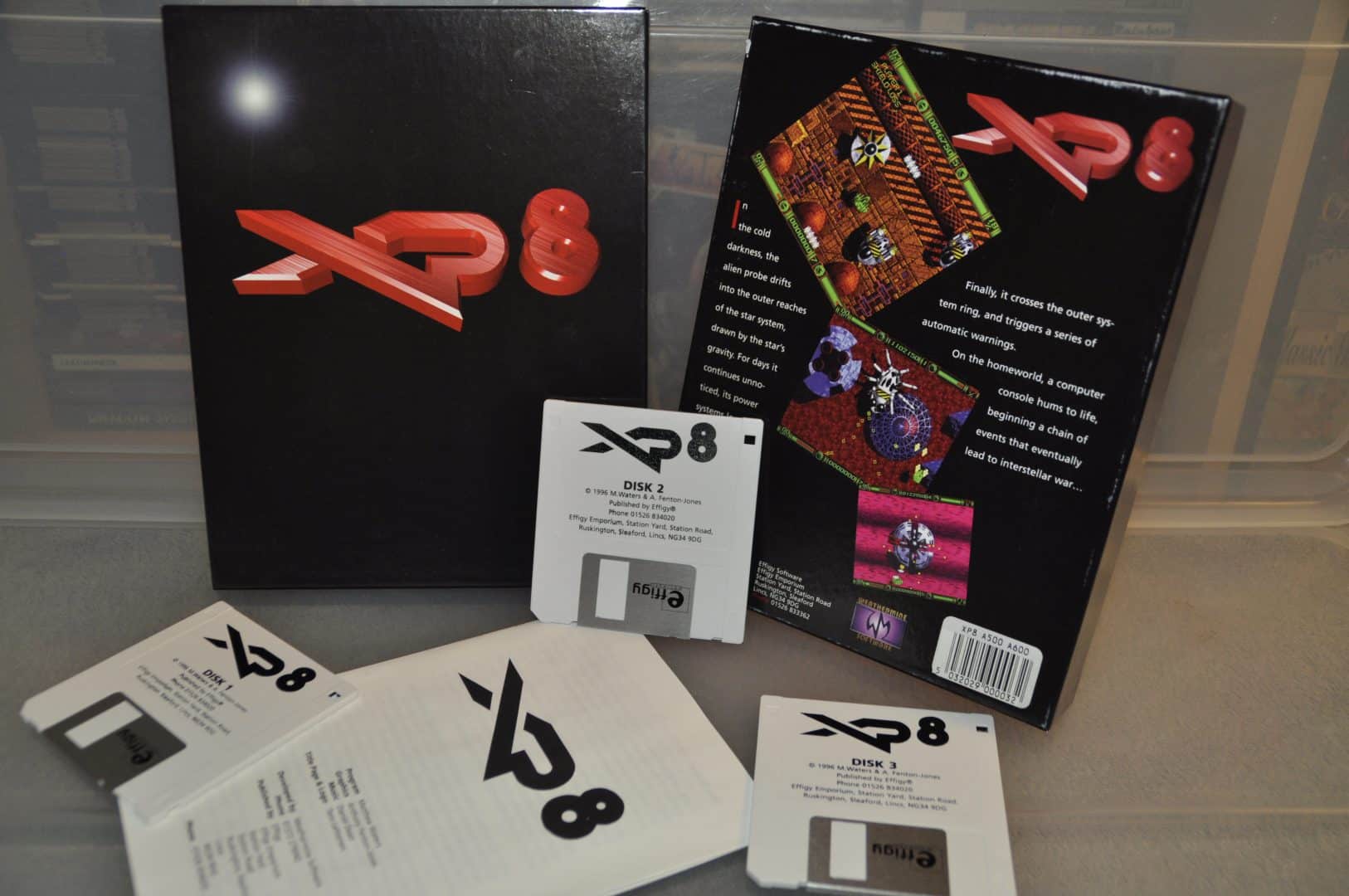 This is all the stuff that came in my box, not all that much but still worthwhile and a pretty rare game to find today, i am really happy that i managed to snag it back in the day as i have not seen anyone ever since then except for the AGA version i mentioned earlier. XP8 belongs in every shoot ’em up fan’s collection for several reasons but mostly because it deserves to be there for trying so bloody hard.

Screenshots are taken from Hall Of Light and box shots from my own personal collection. 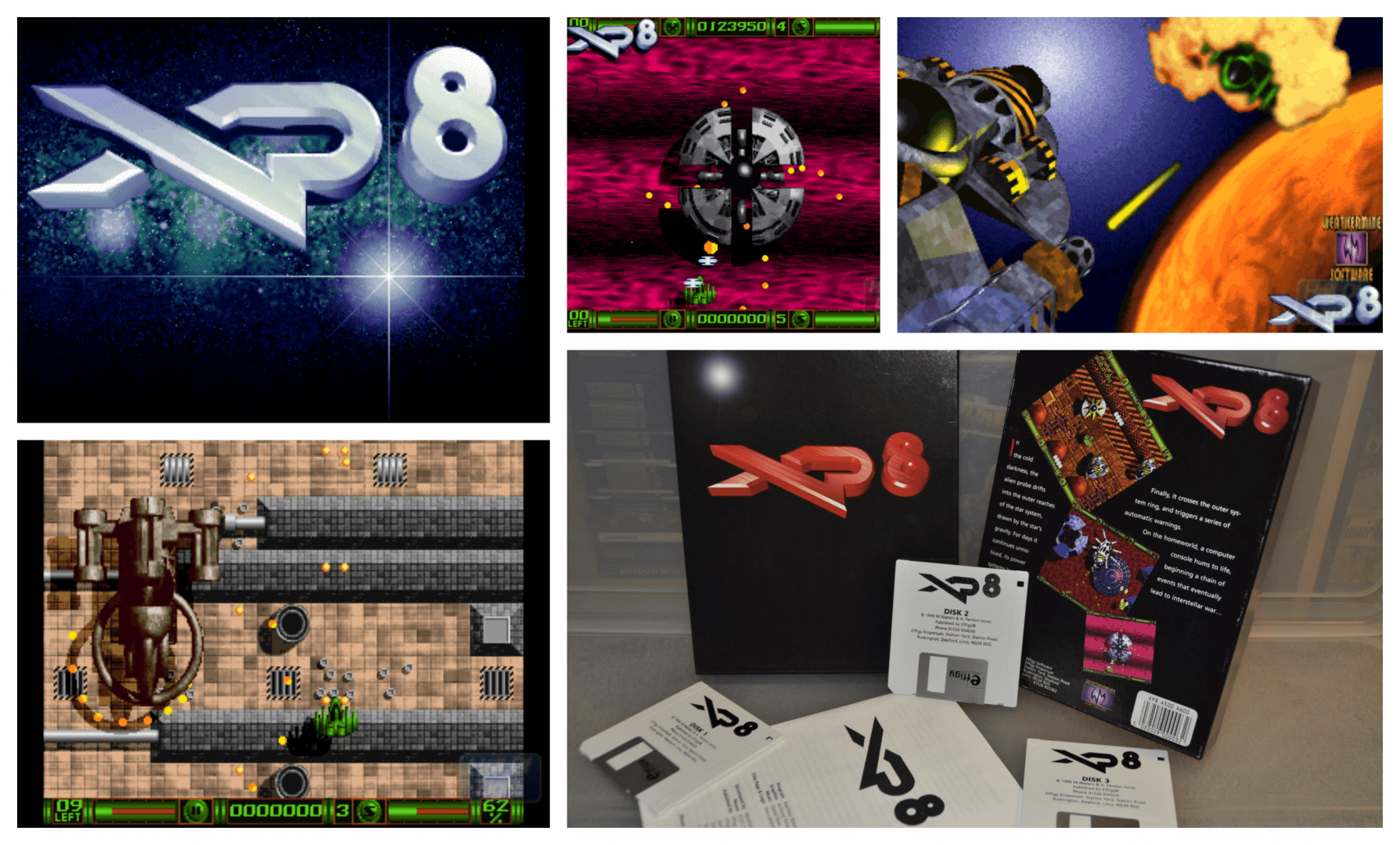