Chris Wilkins did it again, yes he managed to write yet another “must have” book for the retro scene.

This time it is about the Commodore C64 and what it had on offer compared to its competitors, and maybe most of all it shows why the “breadbin” won the 8bit generation. 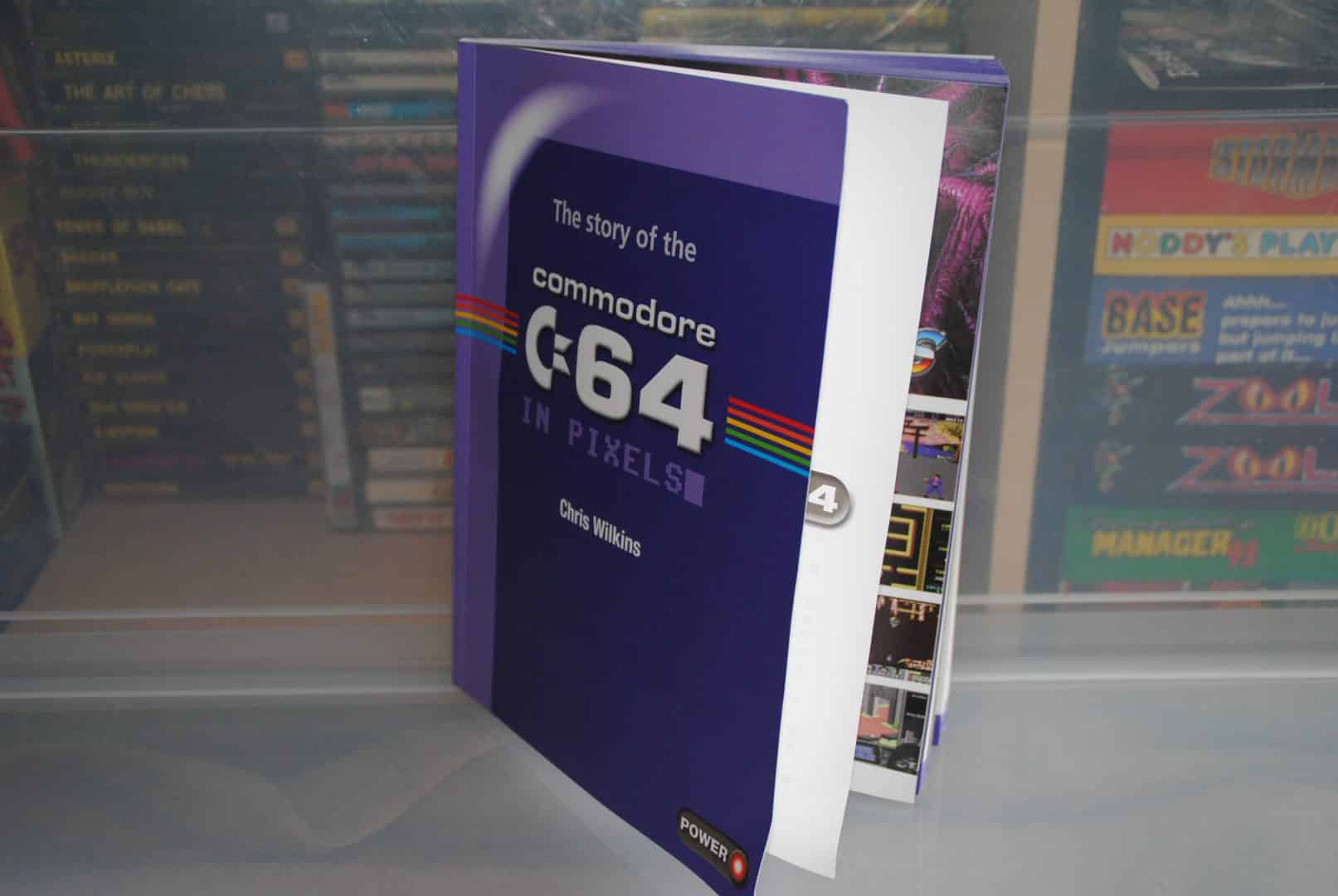 The book started out as a Kickstarter project, and like many, if not all retro book projects so far it got funded in a very short period of time and that meant lots of freebies for the pledgers, more about these later on.

The book version i opted for was the standard one (no hardback this time around either), i have no idea why i did that but i tend to click pledge a wee bit too quickly sometimes when it comes to “Amiga/C64” related stuff.

The quality of the binding and cover is fine, smooth with embossed logos etc. 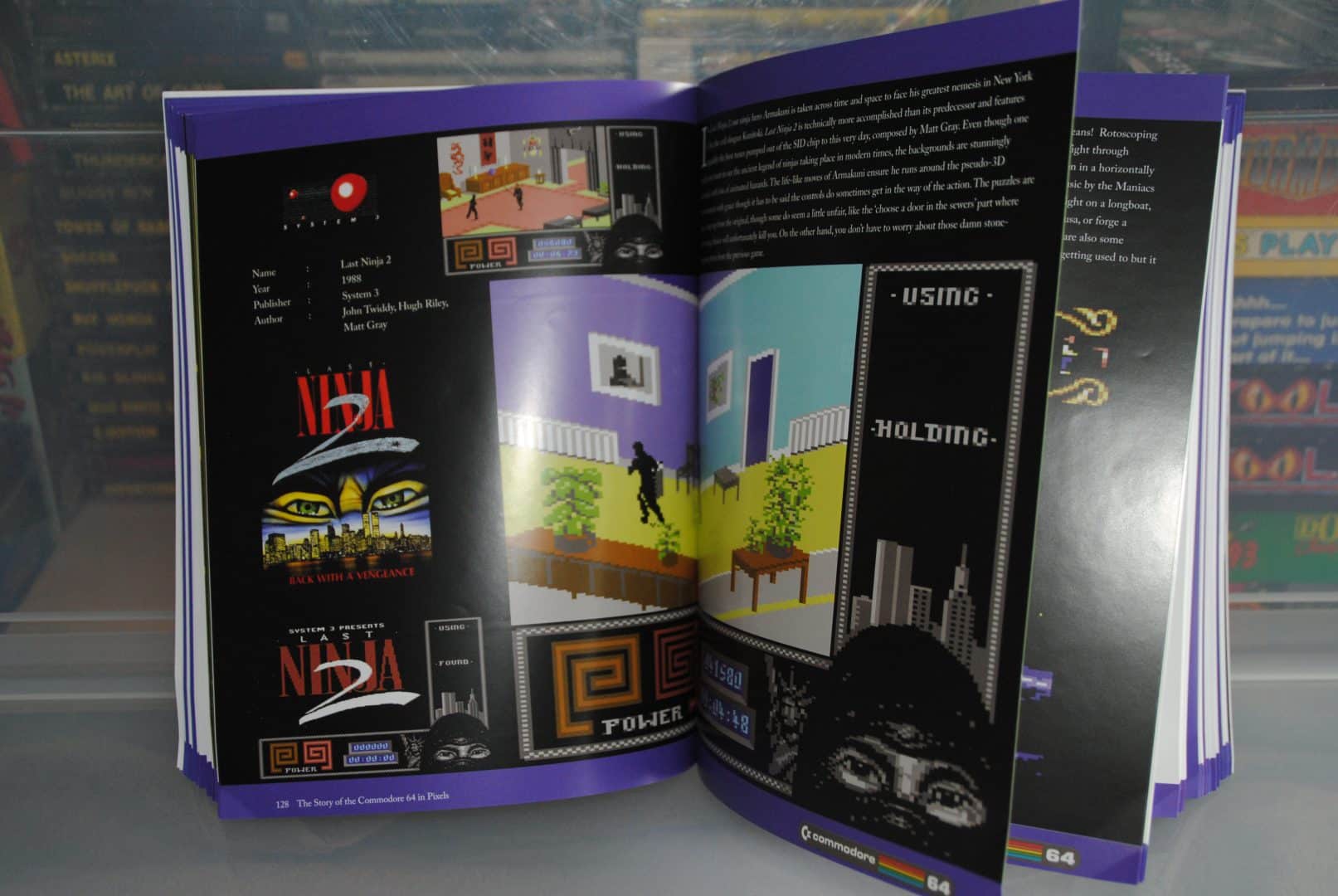 In Pixels is one thick book, 260+ pages with games, music, interviews articles and so on which makes the book stand out from other c64 book projects.

Most core gamers of the past will recognize most (if not all) games in the book, the usual ones are covered of course, although Chris has managed to include some titles that i had not seen nor heard of before i opened the book. 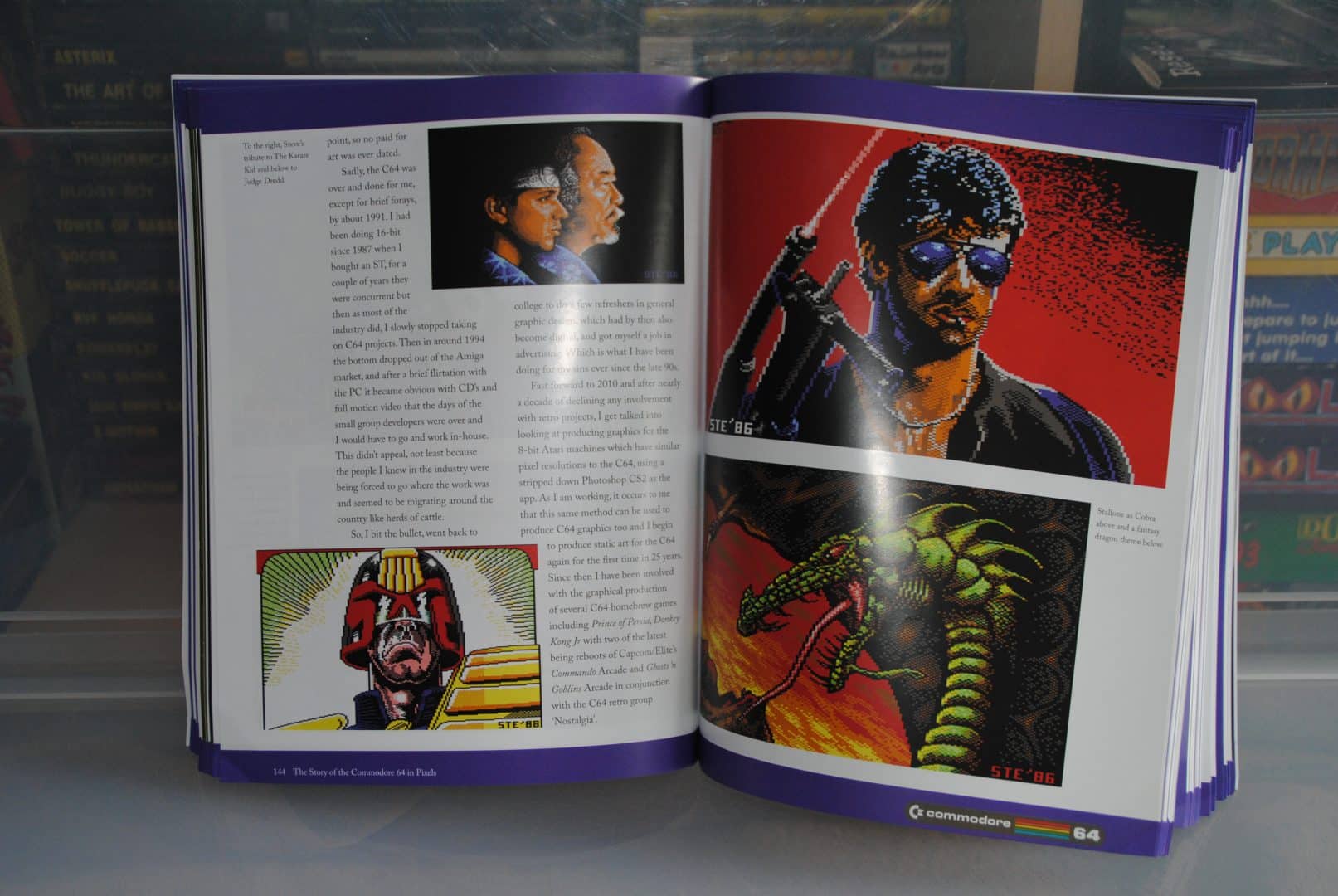 The print quality and paper quality is pretty good and like i wrote in another retro book review some moons ago was that i am impressed that these game screenshots scale so well up. They look just like i remember them from the past.

Carefully selected games and screenshots, as well as some interesting text next to it, makes the book quite fun to read.

Interviews\comments from various artists of the past (and present) is one of the things i like the most with the book. 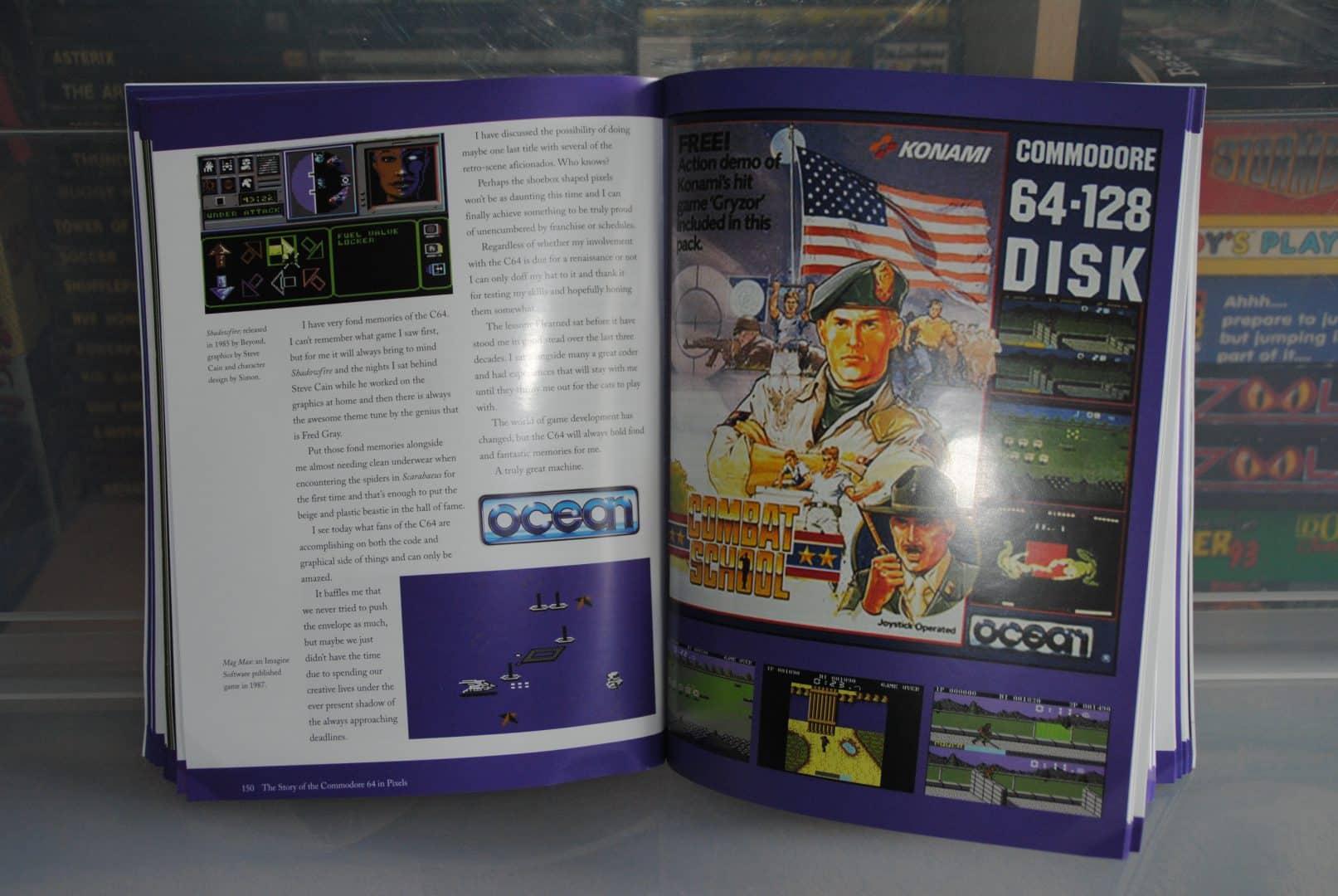 The book got some adverts in it, one of them being Combat School, a game which is in my top 50 of all time game list.

The C64 version might not be the best version out there but i still love it to bits, i like it so much that i actually play it and 1942 quite a few times each month or so in the C64 emulator VICE for AmigaOS4. 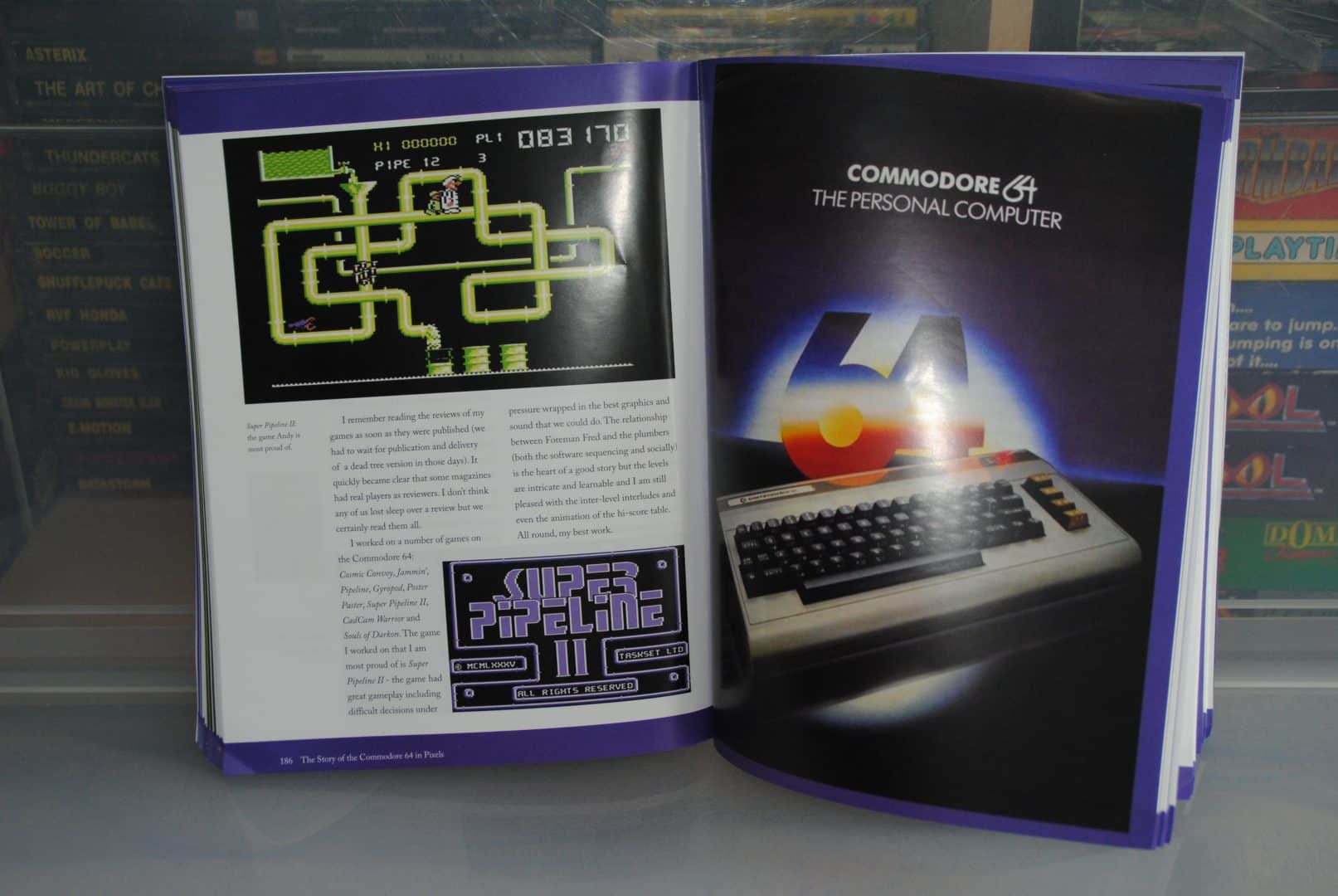 Quite cool to see that Super Pipeline is covered in the book.

Huge fan of both games, the first one was one of the first games i stayed up all night playing. I have not tried these in probably 20 years or so, but i have very fond memories of them and i guess i should fire em up and see if i still like em as much as back in the day. 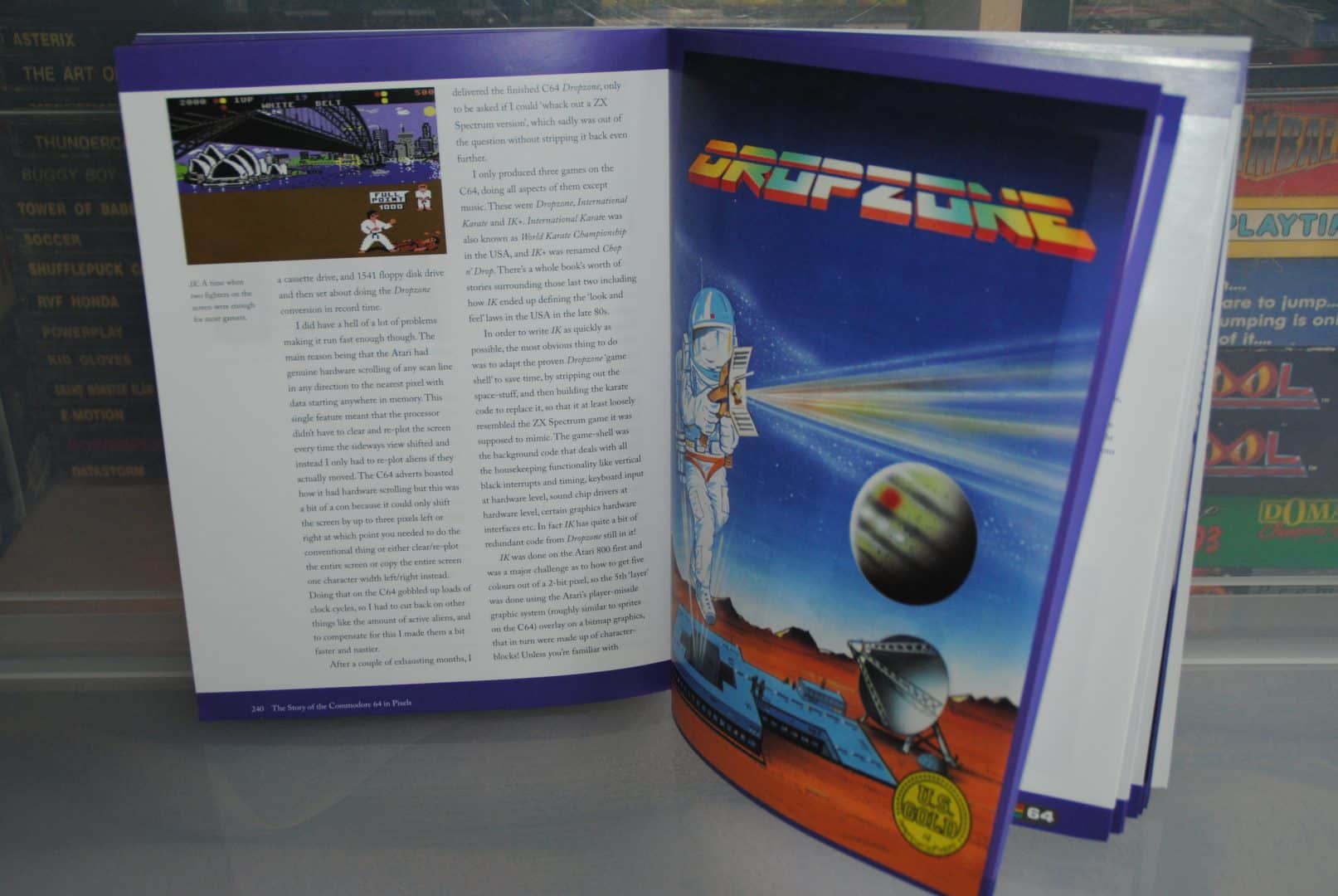 International Karate, now there’s a classic. I must have played this game thousand hours or something.

Reading the article and looking at the pictures sparks memories, both good and bad.

The bad one being me trying to impress a girl with my karate moves after trying this game, that did not go to well down and i can safely say that it was quite the embarrassment heh. 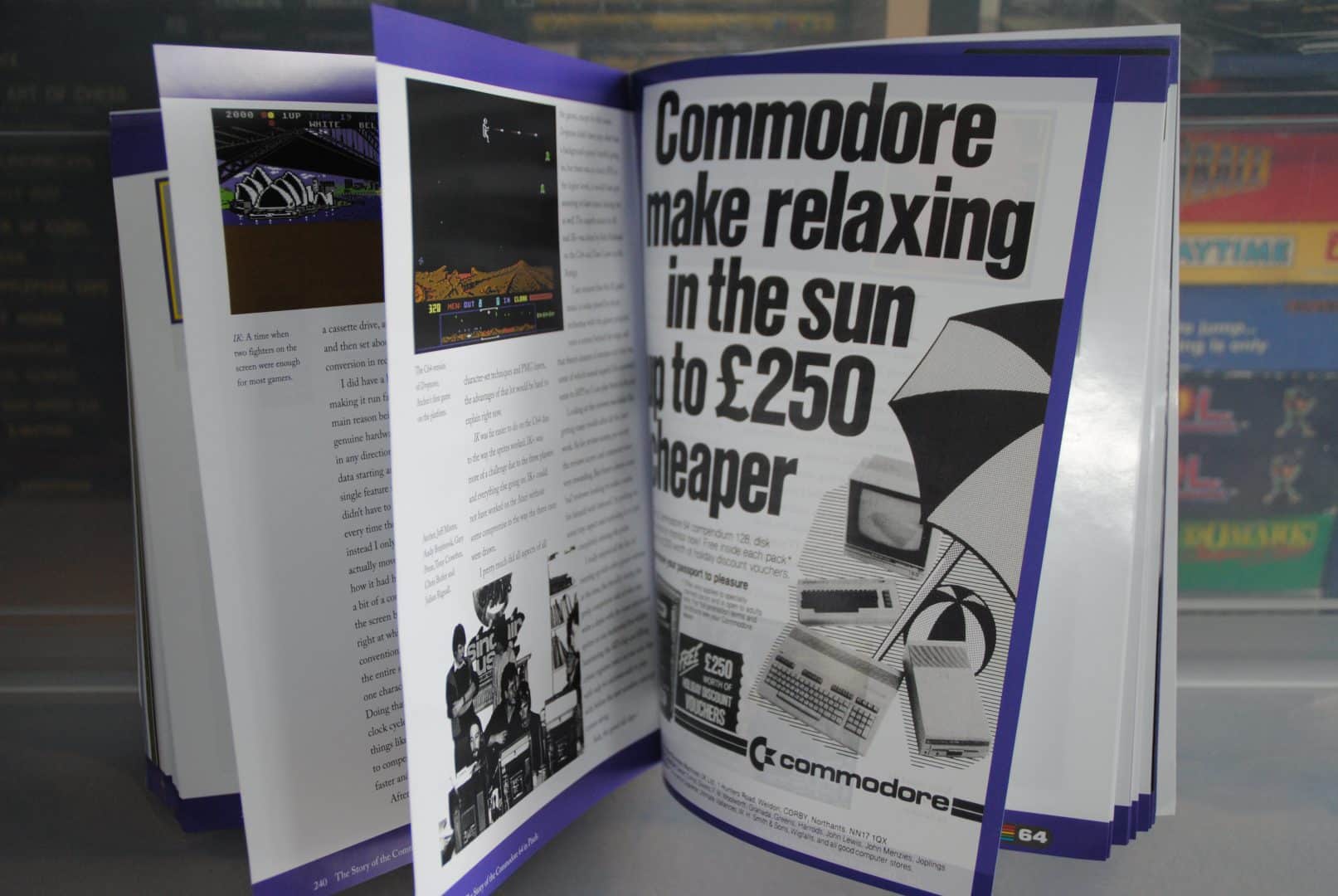 I could say that you should buy the book just because of the interviews but that would have been wrong as there is more to the book than that, that said, they certainly help to reach that little extra needed for something to be special. 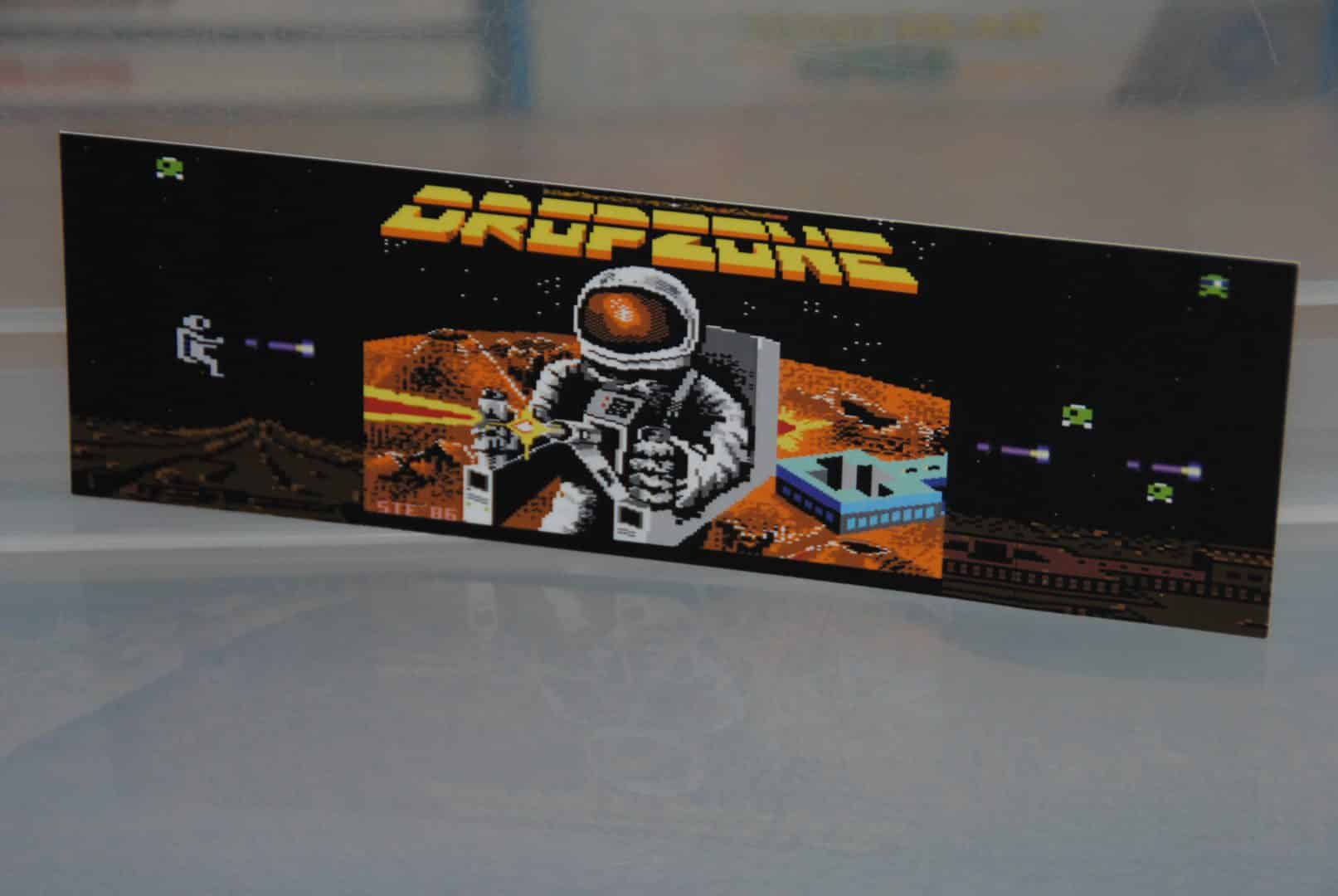 Ok, so time to talk about all the extras/filler or perks as it is called.

This time around i got a lot of stuff, and maybe best of all is that it is good stuff too.

A neat Dropzone bookmark, every book should come with a bookmark right? – so why not do it with style? 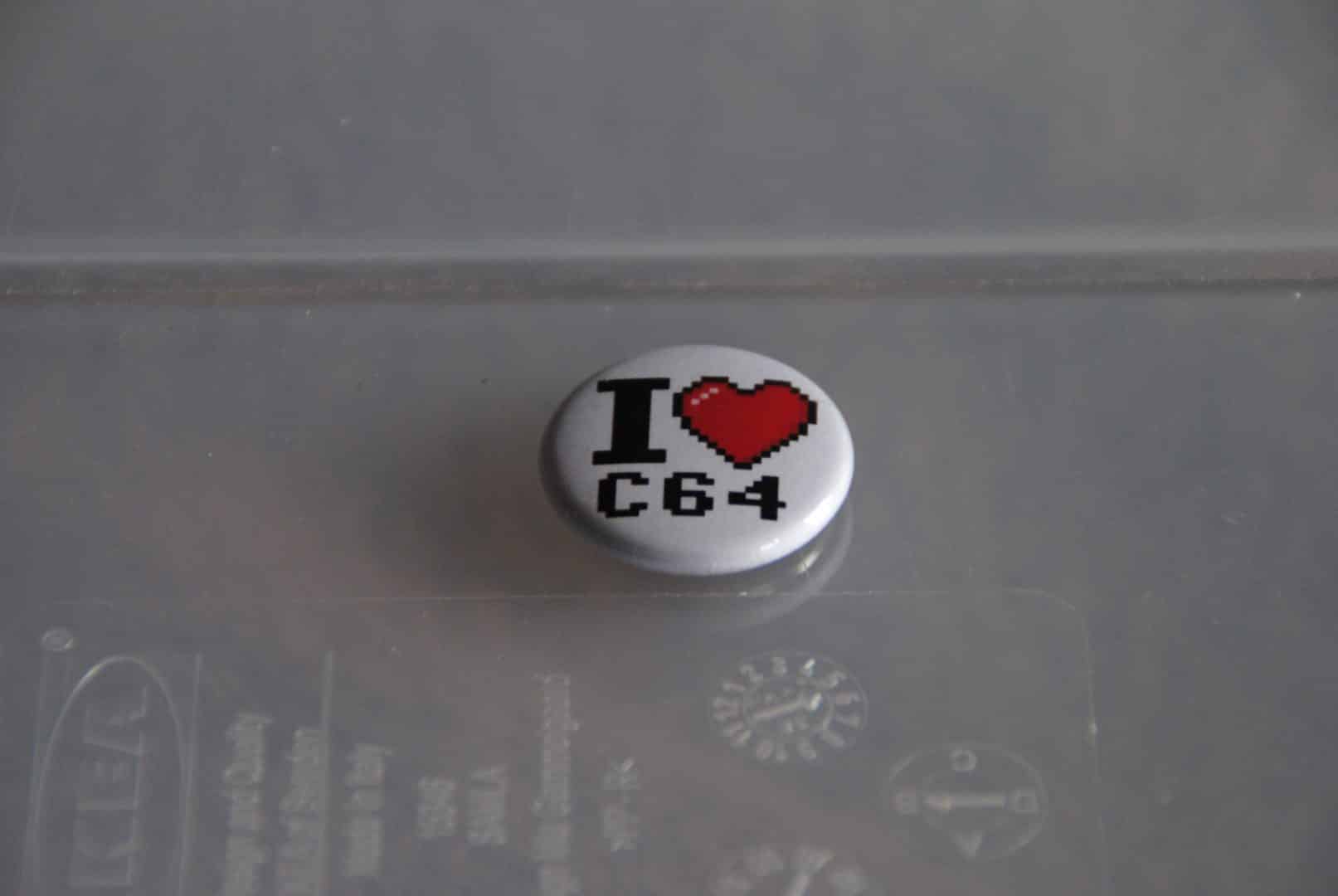 Refrigerator magnet which says I love C64, mandatory if you ask me.  Awesome of Chris to include it. 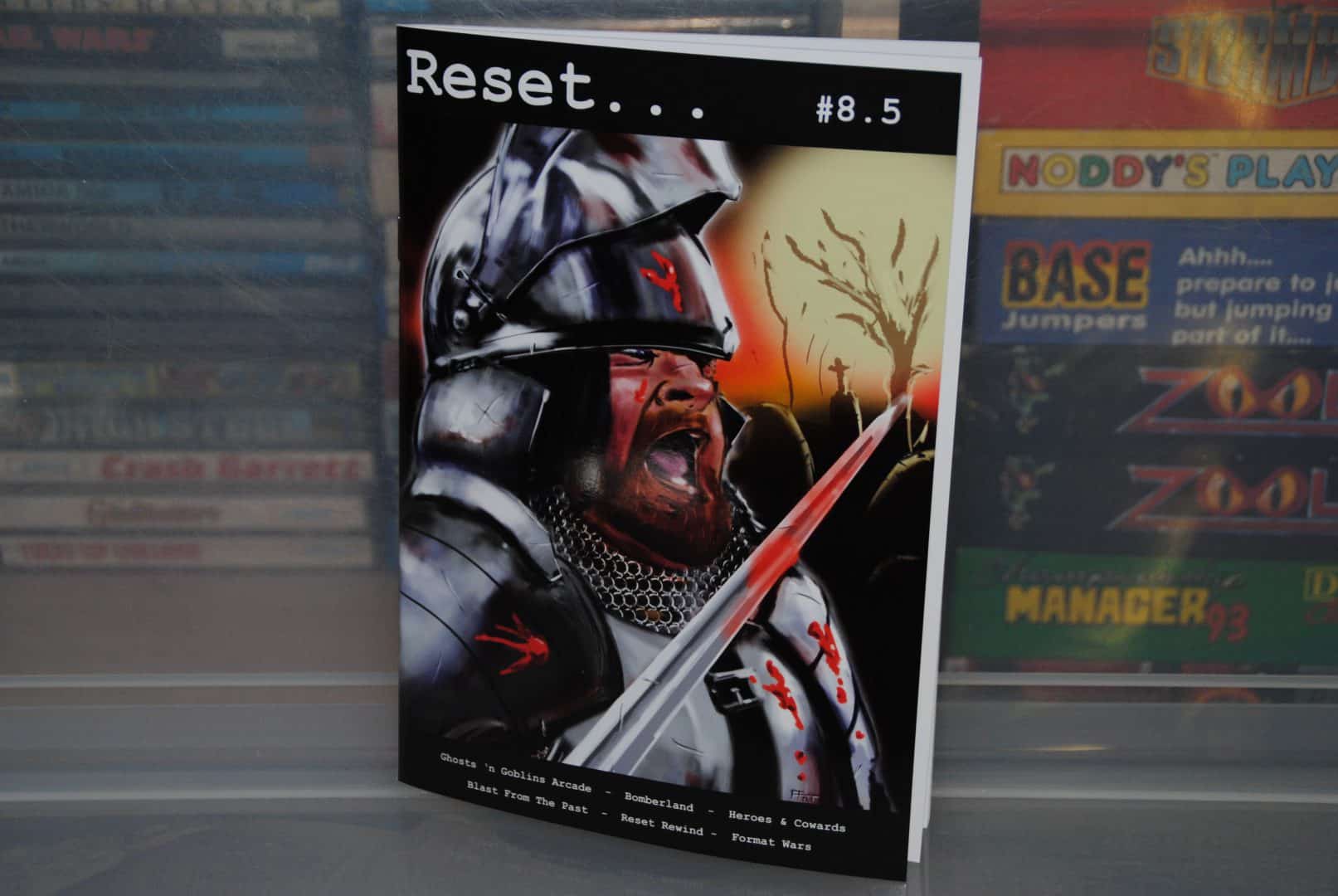 RESET, a retro magazine. Interesting choice and one that solved one of my childhood puzzles, i have been trying to figure out the name of a game for over 30 years and this magazine managed to do it – thanks!. 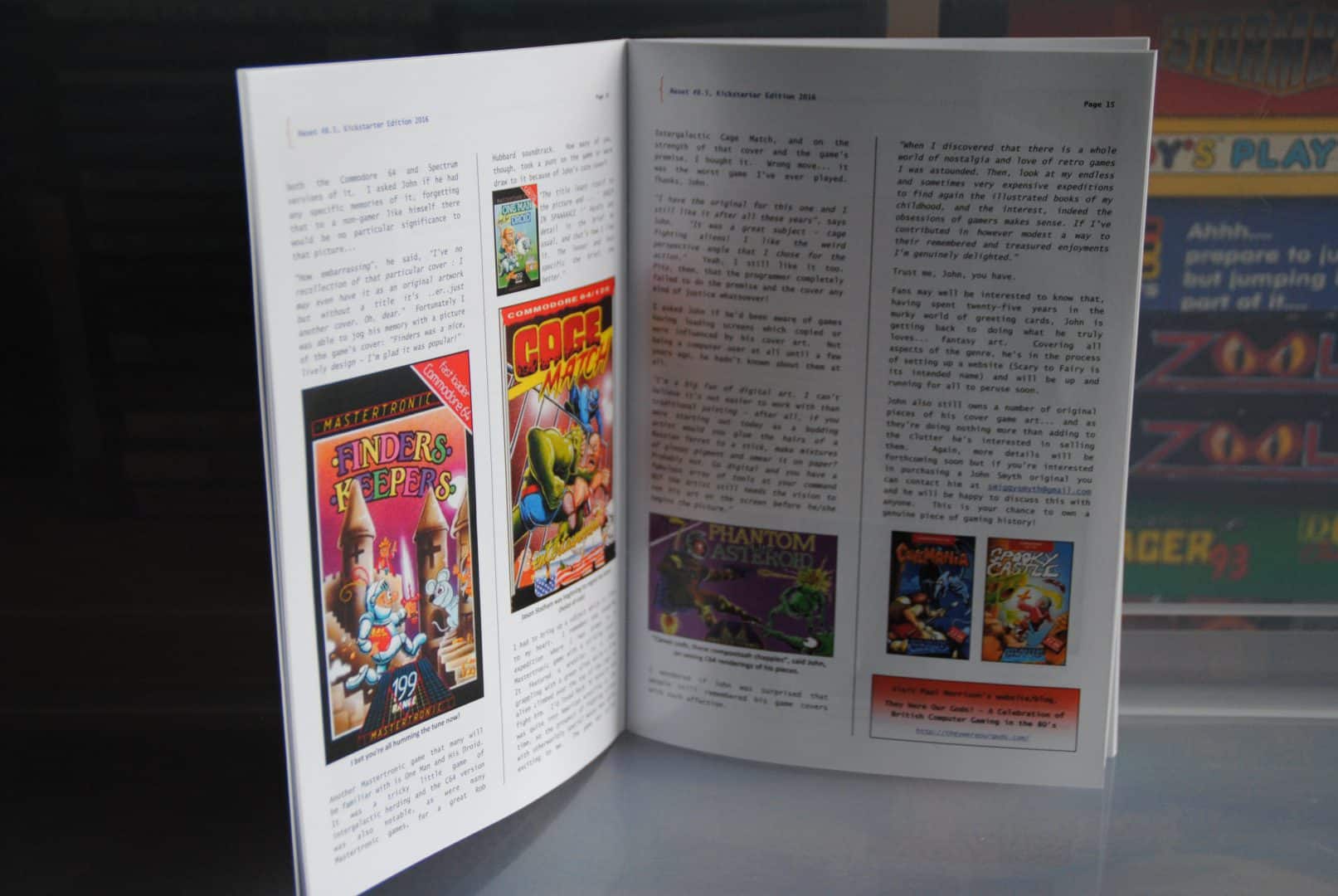 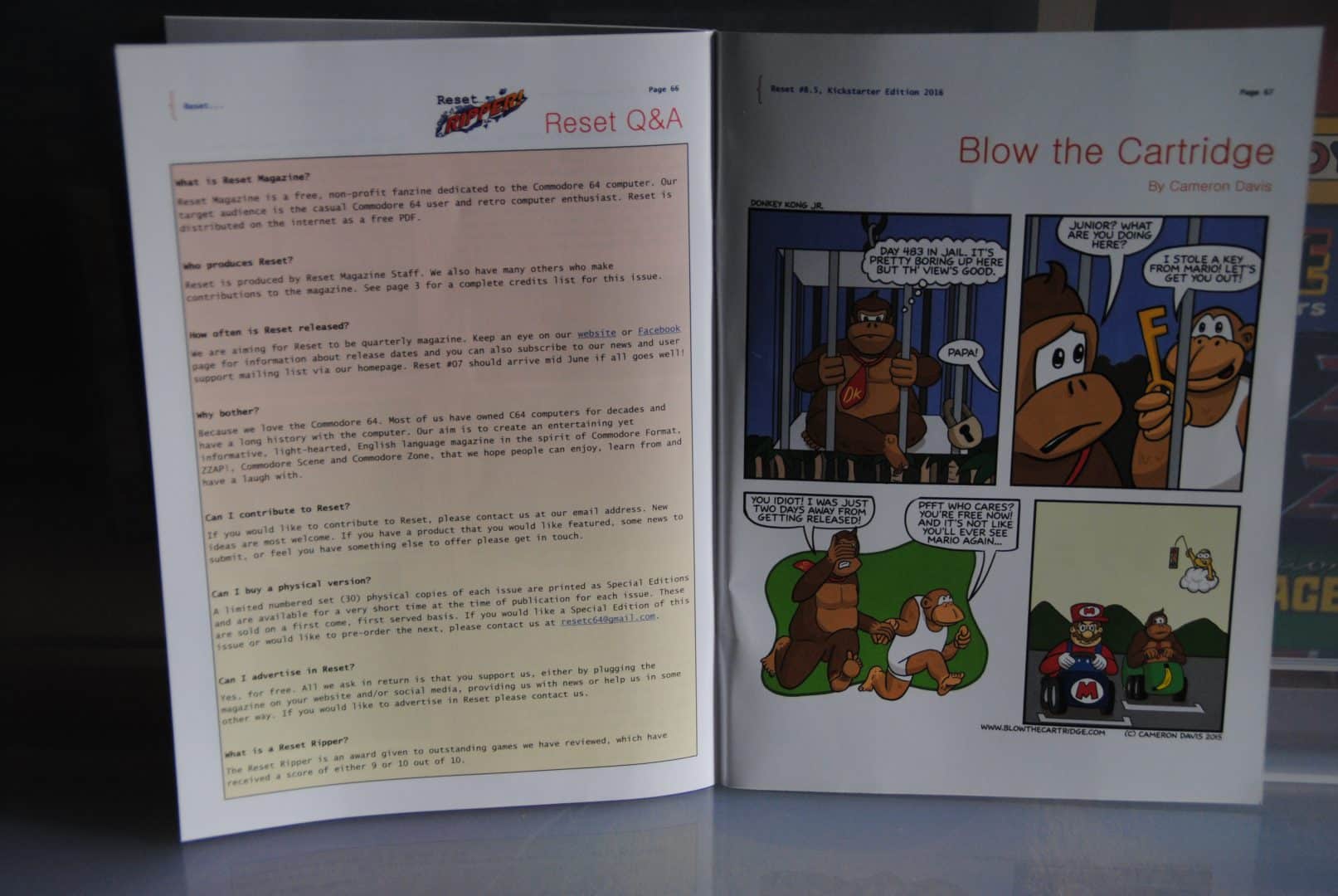 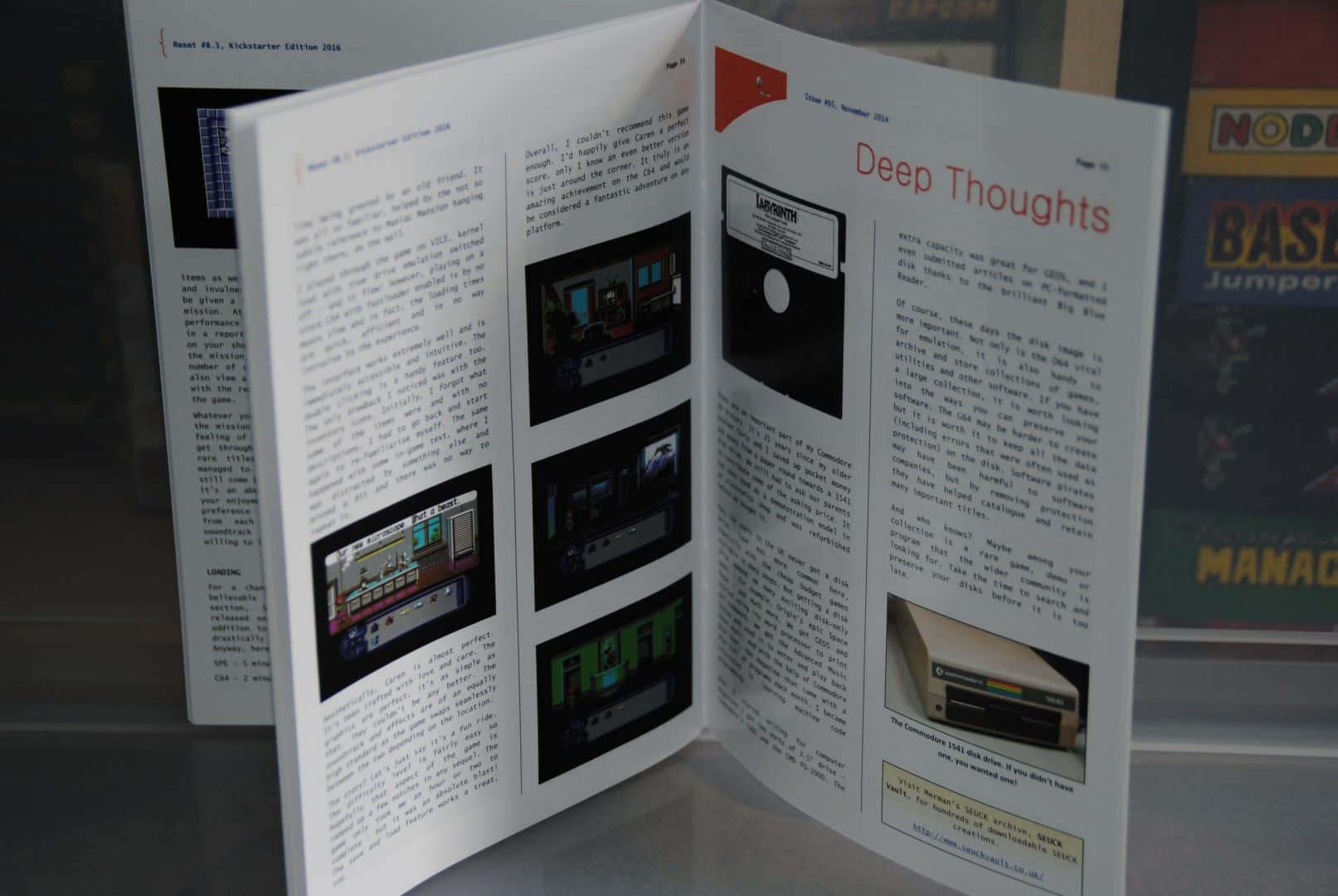 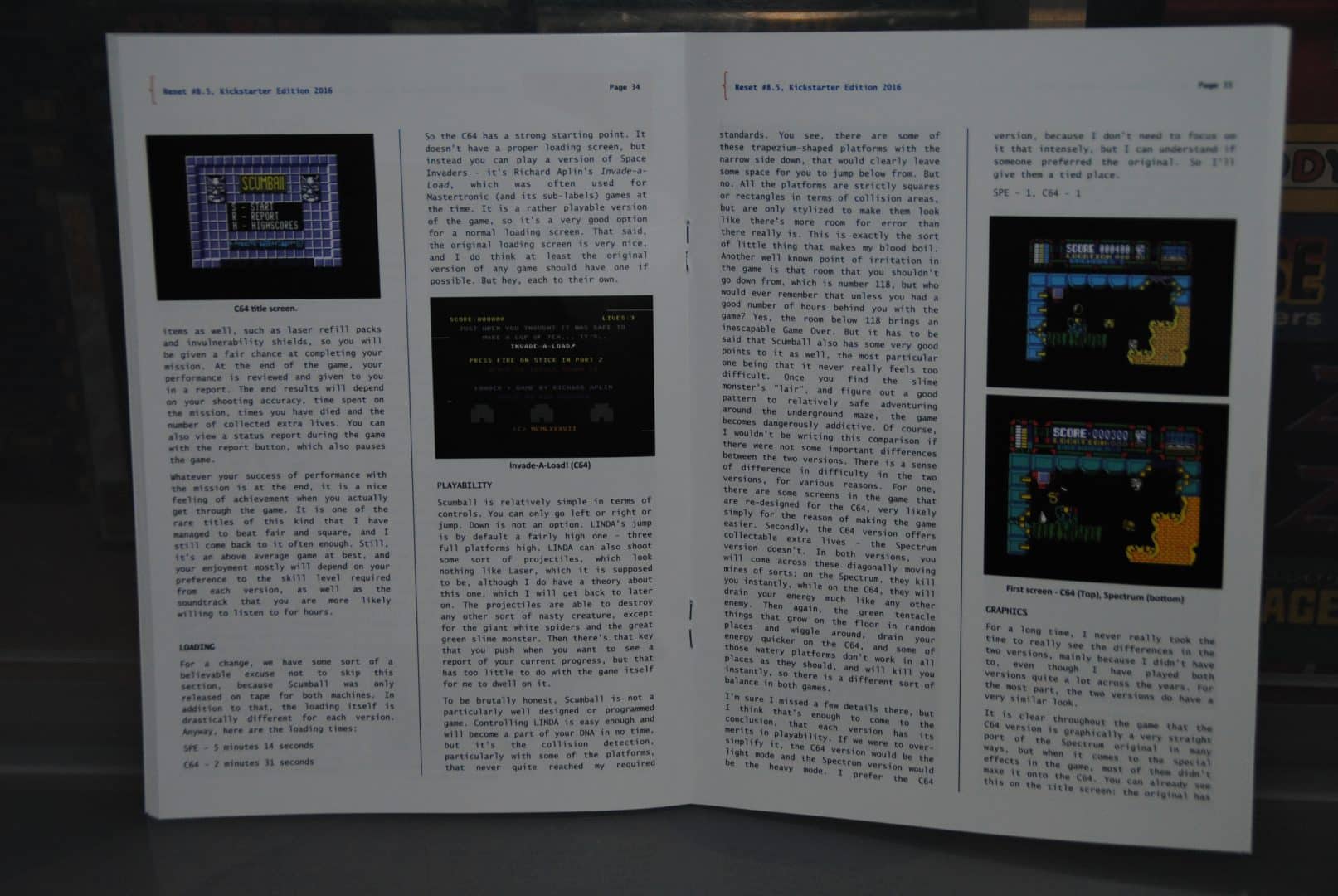 I guess i should dig up a subscription of it or something and i guess i will at one point although i am not sure if it would do much more than collect dust due to the fact that i am not into the C64 scene anymore -or have been since 1999 or so.

There is also a very interesting story about CAPCOM’s MEGATWINS game in it (The C64 story). 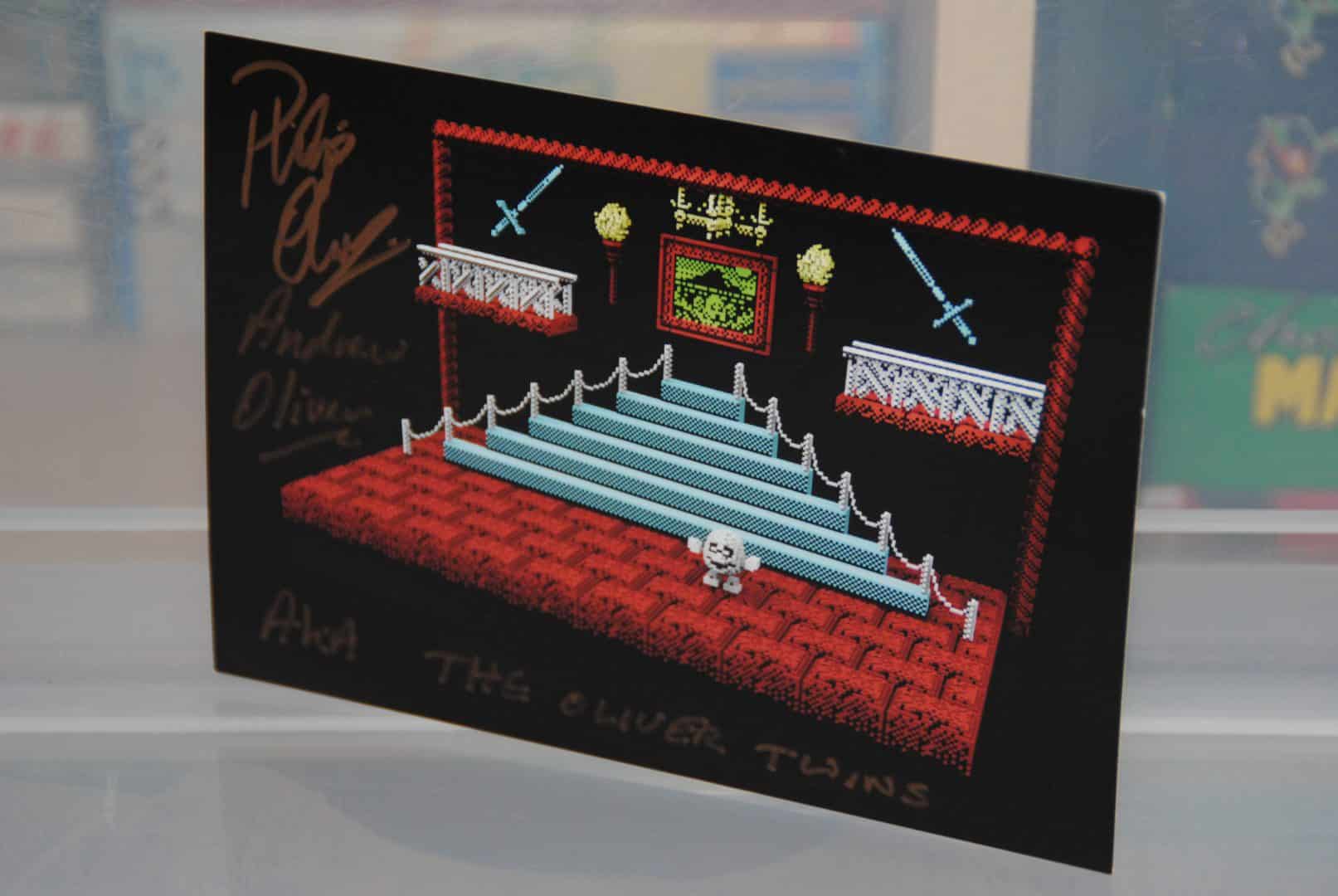 I pledged for a special canvas and 3D card package and here you can see the first one of the 3D cards, i must admit i thought these cards would be in “3D”, you know, those sparkly glittery kinds of things that you move and it shows 2 images changing between each other.

It looks really cool though and it is even cooler with the signatures on it. 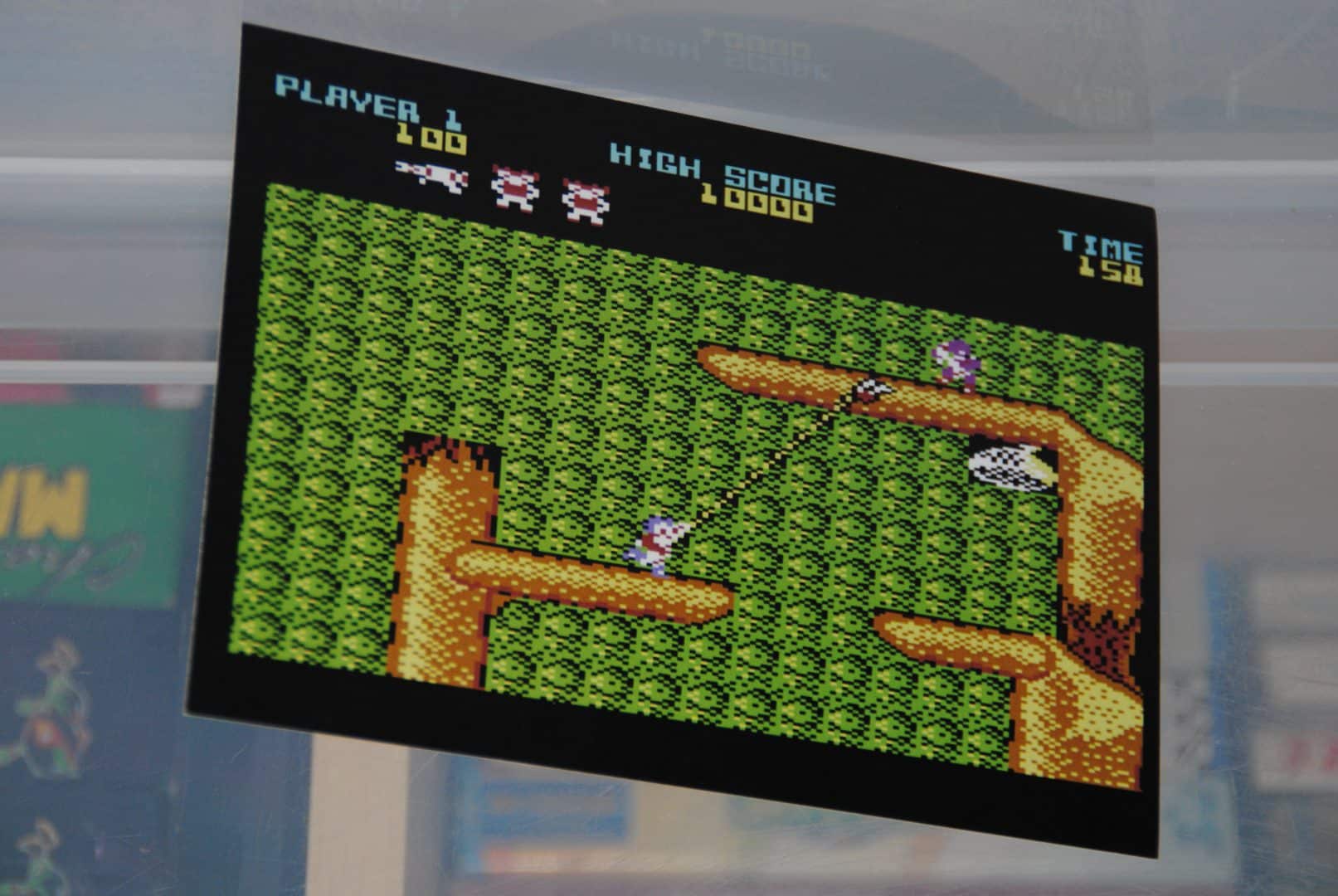 Yup, it is Bionic Commando. I must admit that i never liked the C64 version and that goes for the Amiga version too.

Oh and yes, the picture was done upside down, one does odd things when you are in a hurry (sorry). 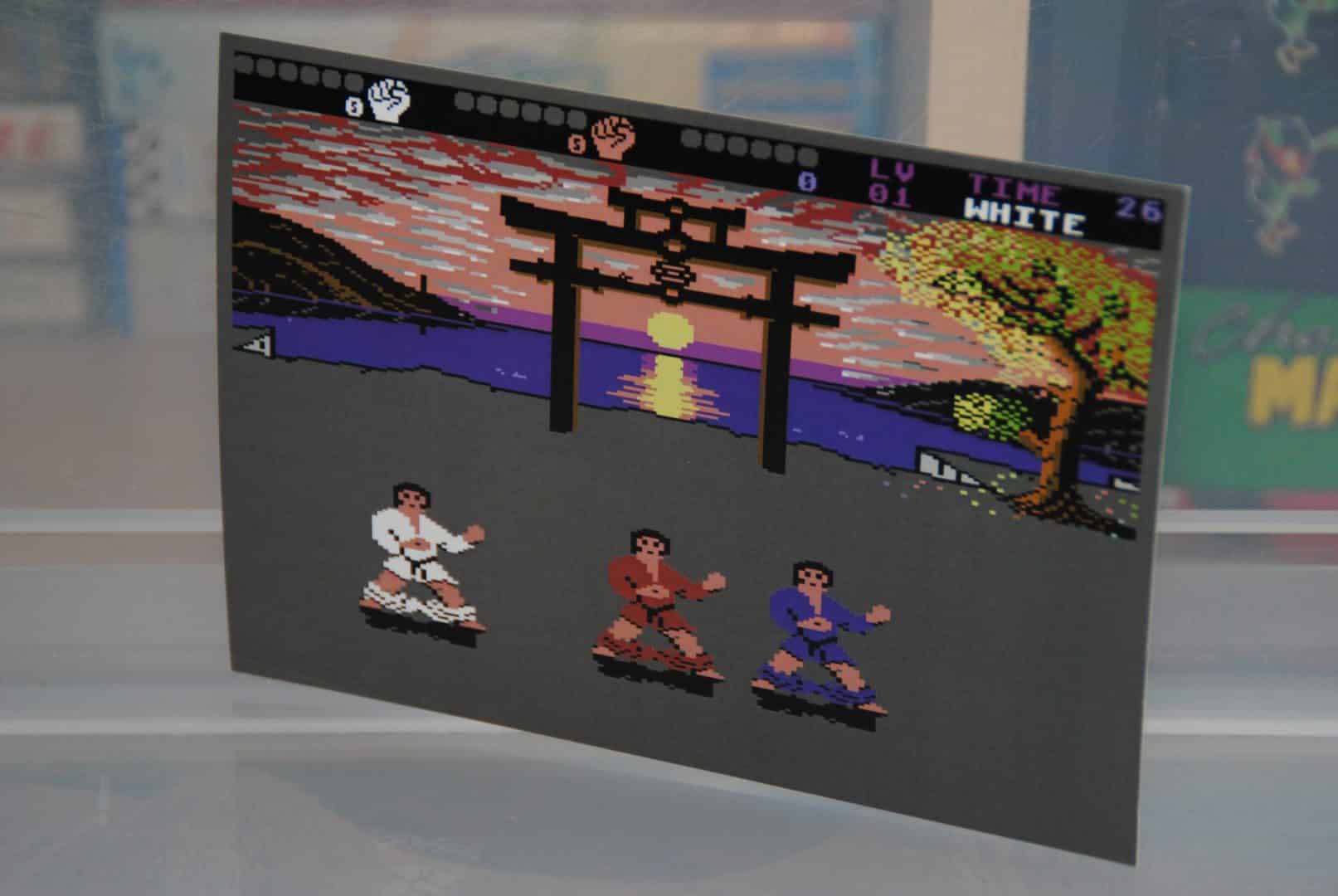 I remember the first time i pressed “T”, it feels like it was last week. 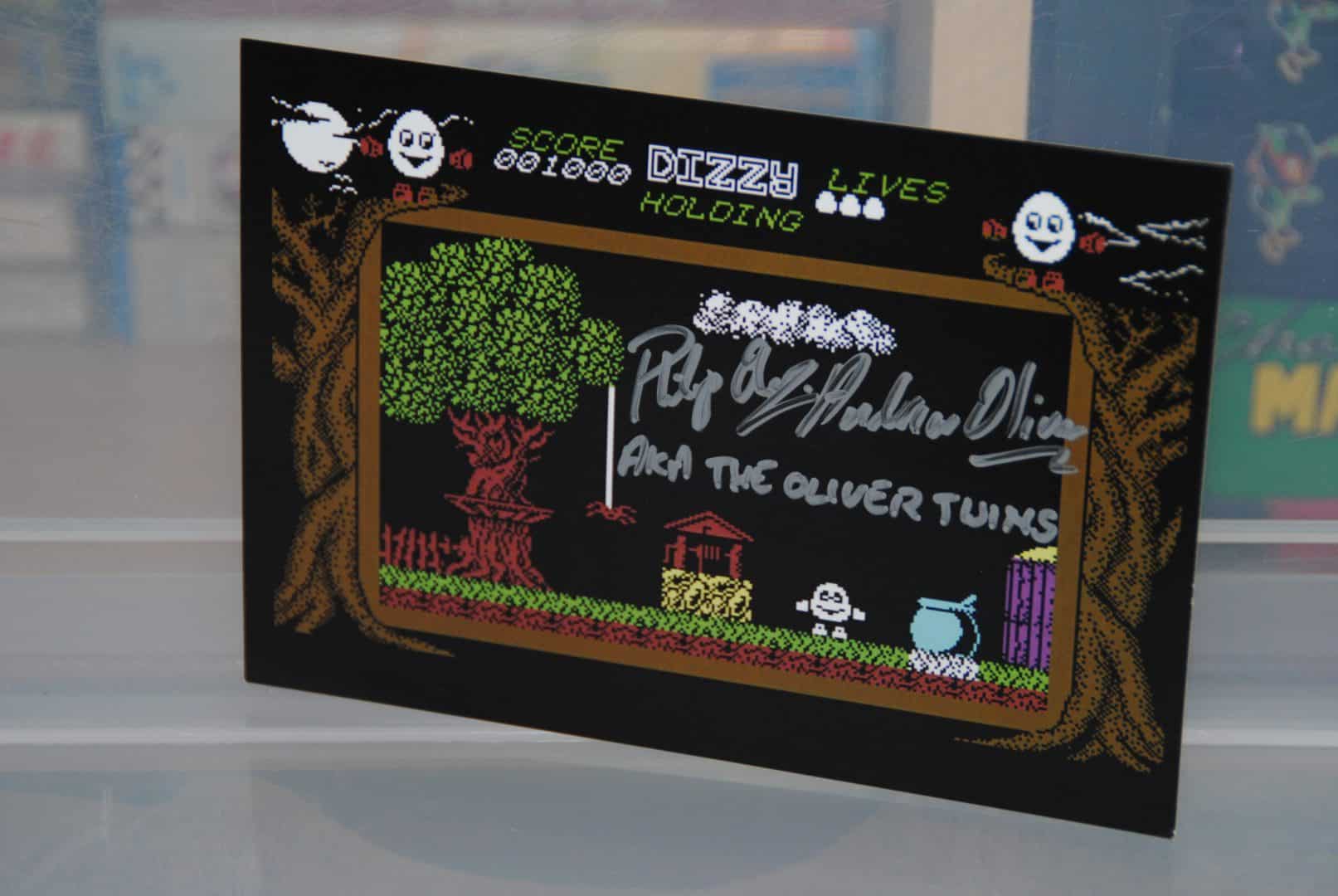 More Dizzy stuff, i got one extra due to Chris being extra nice to me.

I know there are some guys out there in the Dizzy community now that are pretty envious. 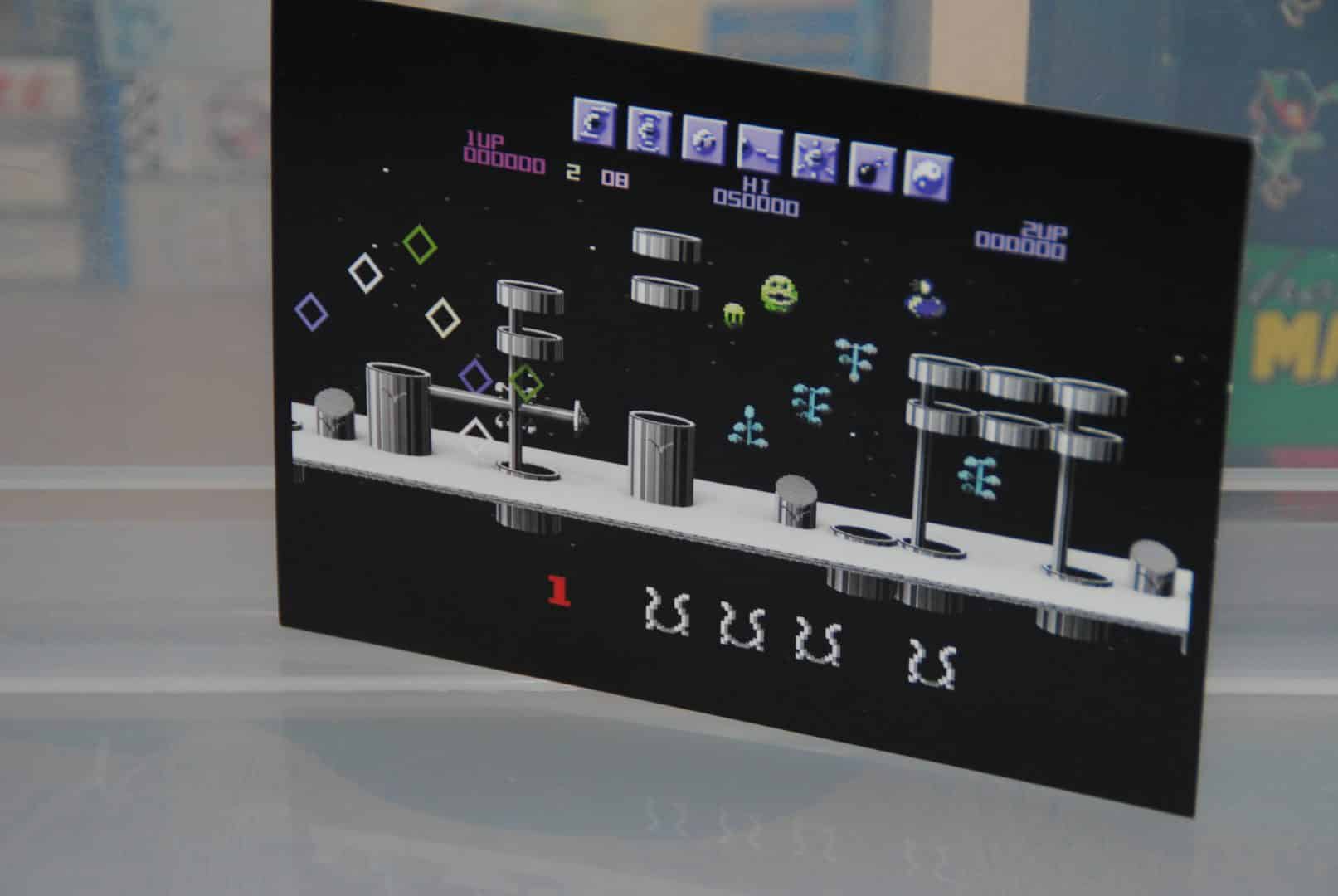 Another classic – Wizball, awesome game this one and one that i could not figure out at first.

I am also one of those who love the sequel – Wizkid, a game that never managed to reach the kult status of the first game. 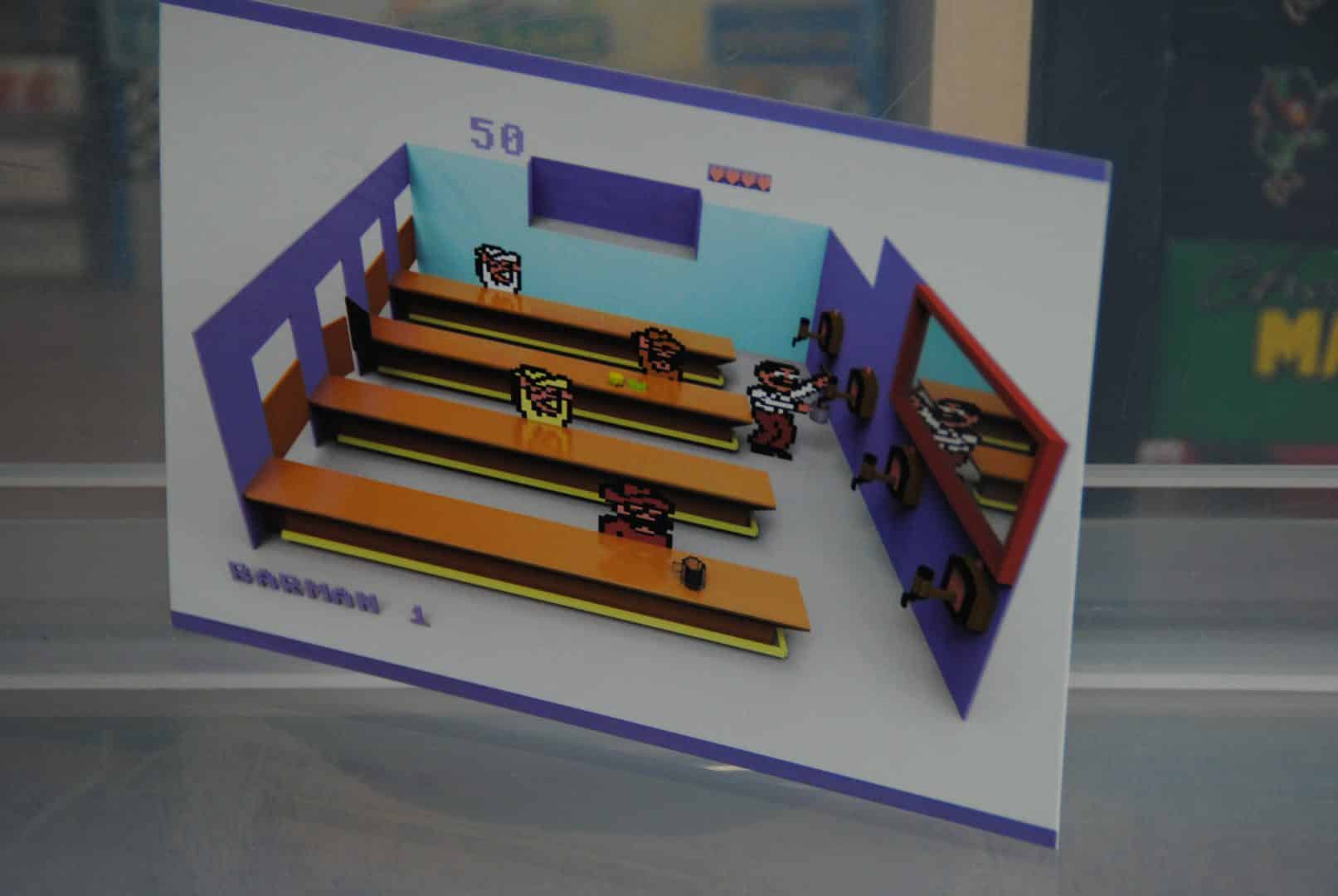 Tapper! , a really good looking 3D card, definitely the best looking one of the lots. 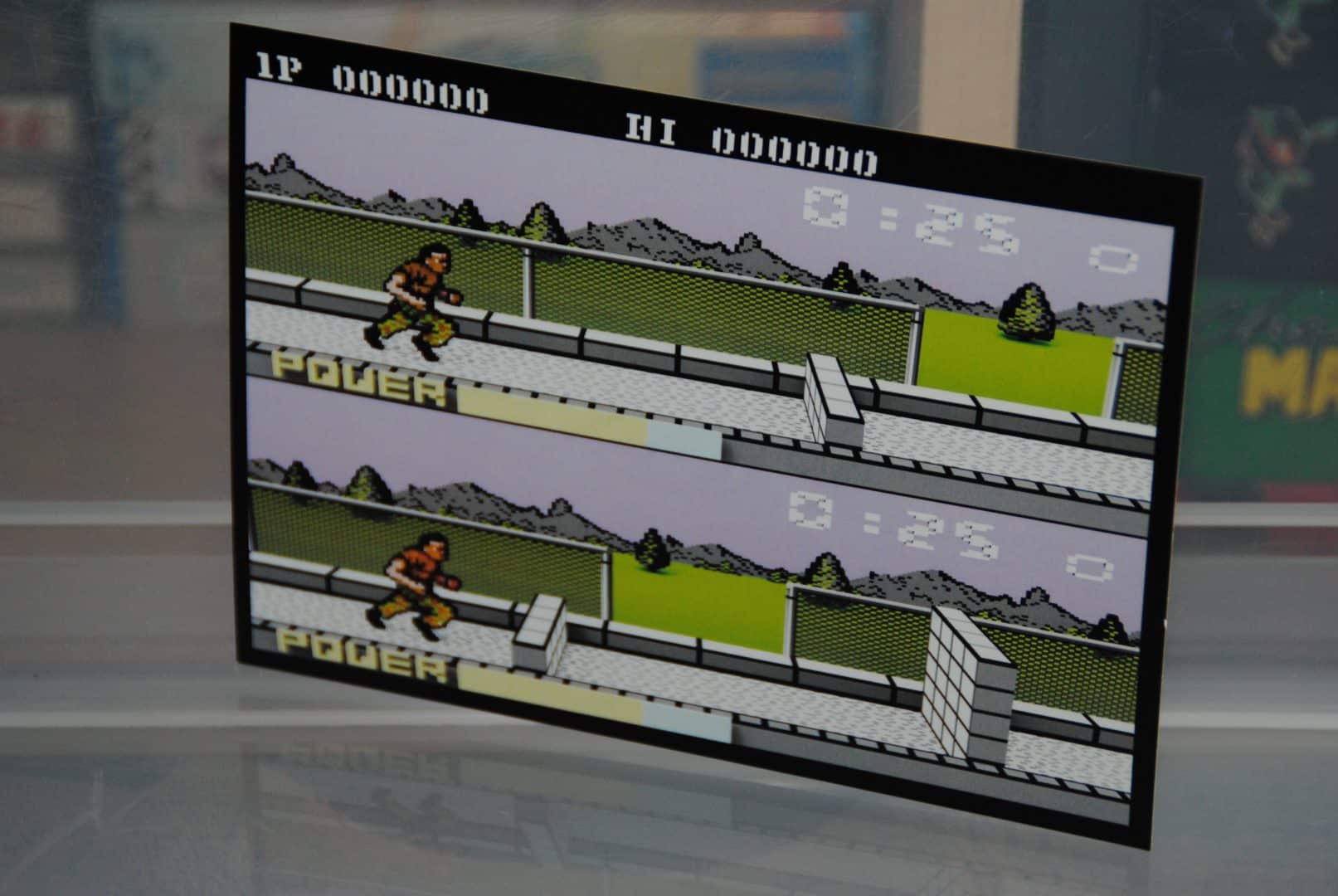 Combat School, i must admit that i kick ass on this game – both the C64 and Arcade version rules.

So many good memories. 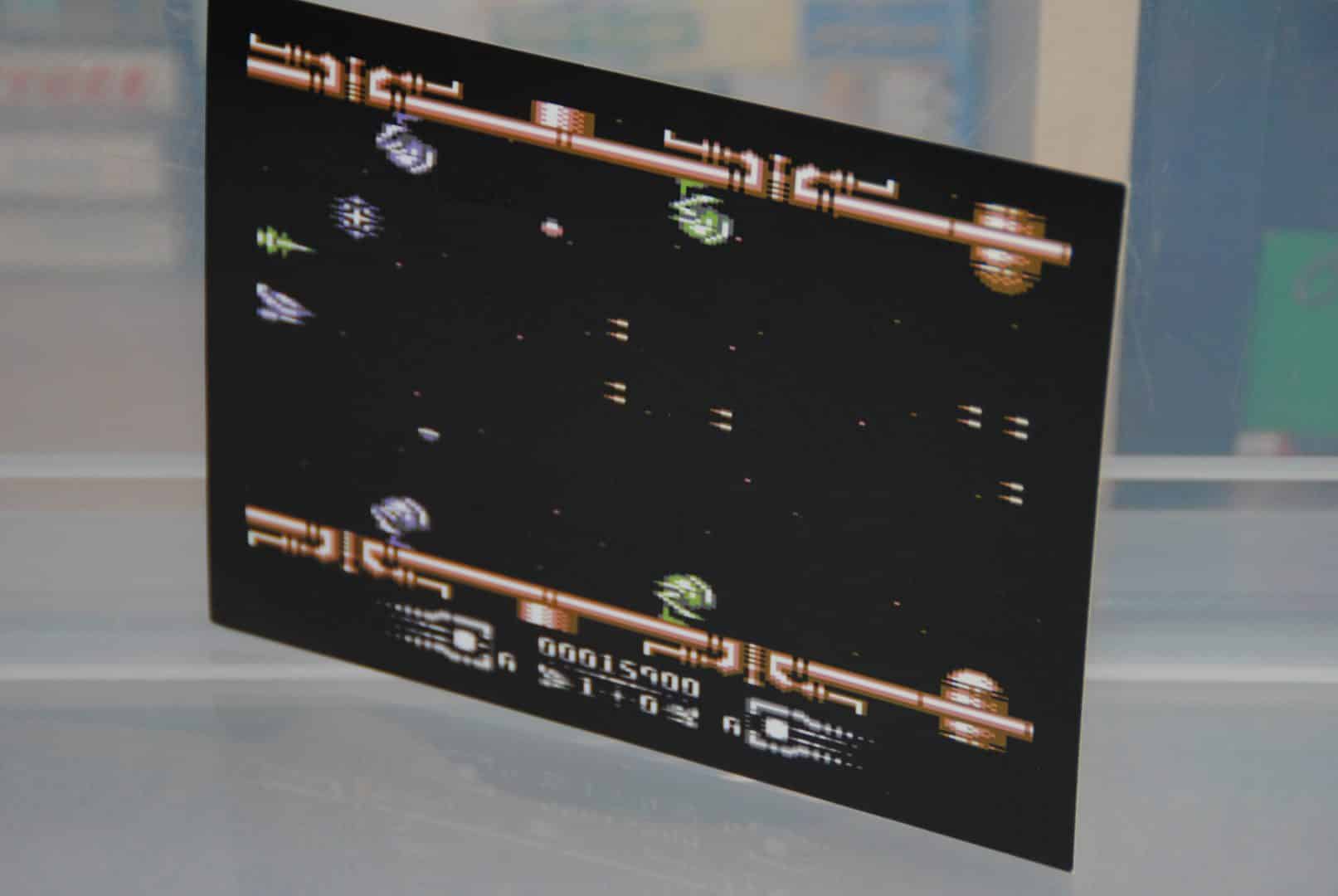 Armalyte, i never got to enjoy the C64 version all that much back in the day. I had already moved onto the Amiga and met other shooters there and somehow managed to think this game was the same as the Amiga version. 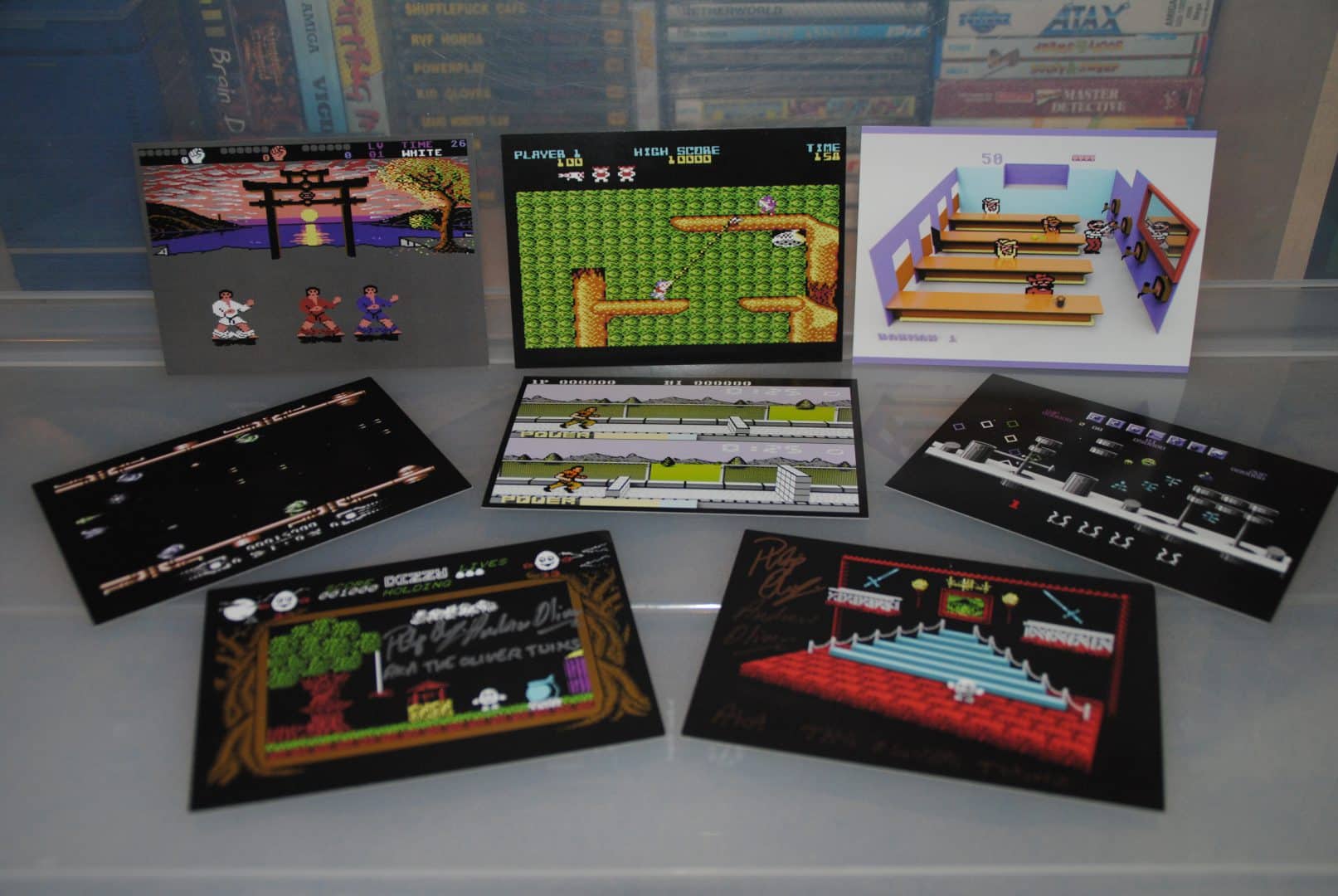 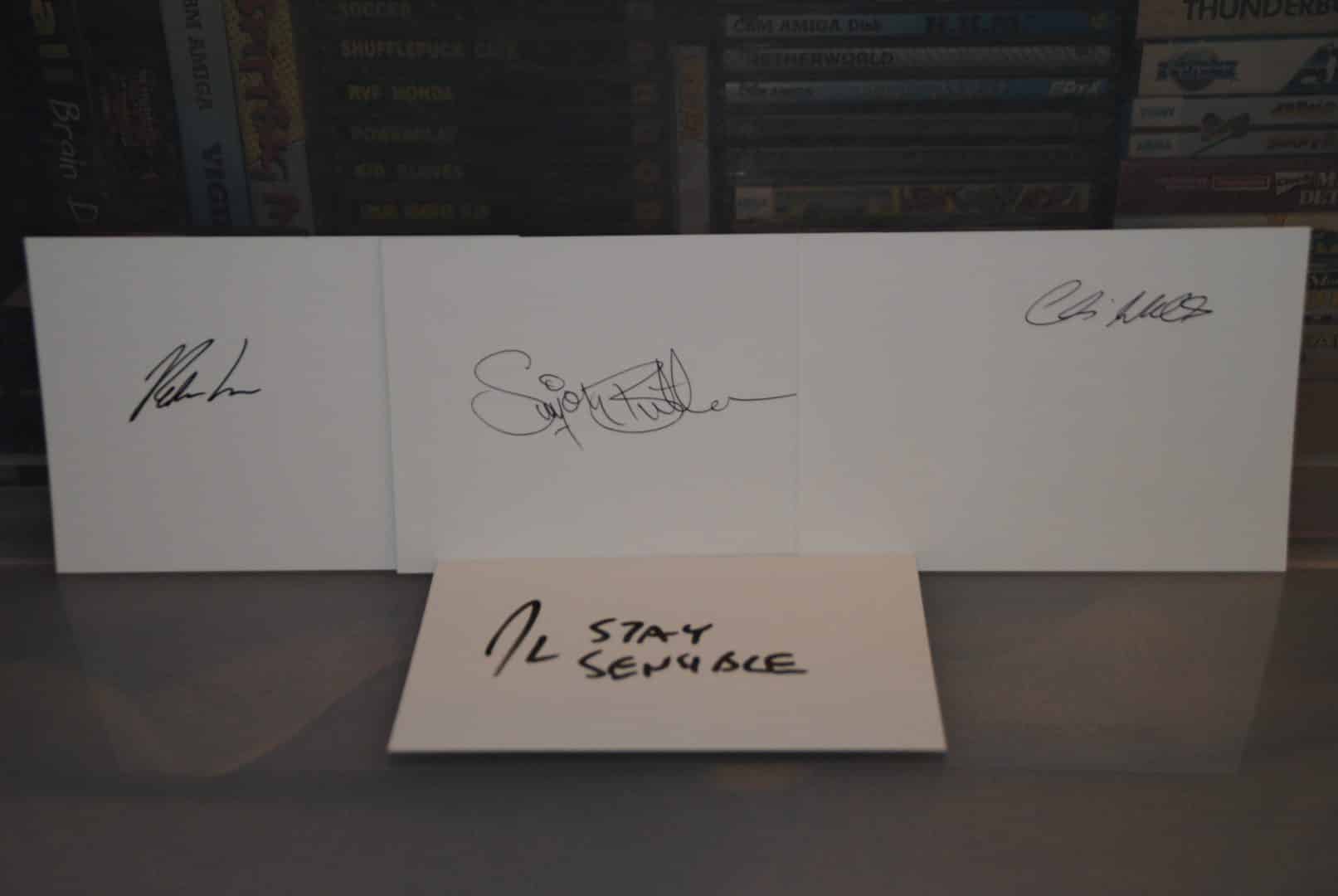 Yup, some of them are signed on the back instead of the front.

So what to do with these cards then? well, i will put them into a box for safekeeping for now as i got no display cases for them/nor room for one.

My house is getting too small for my collector habits sadly. 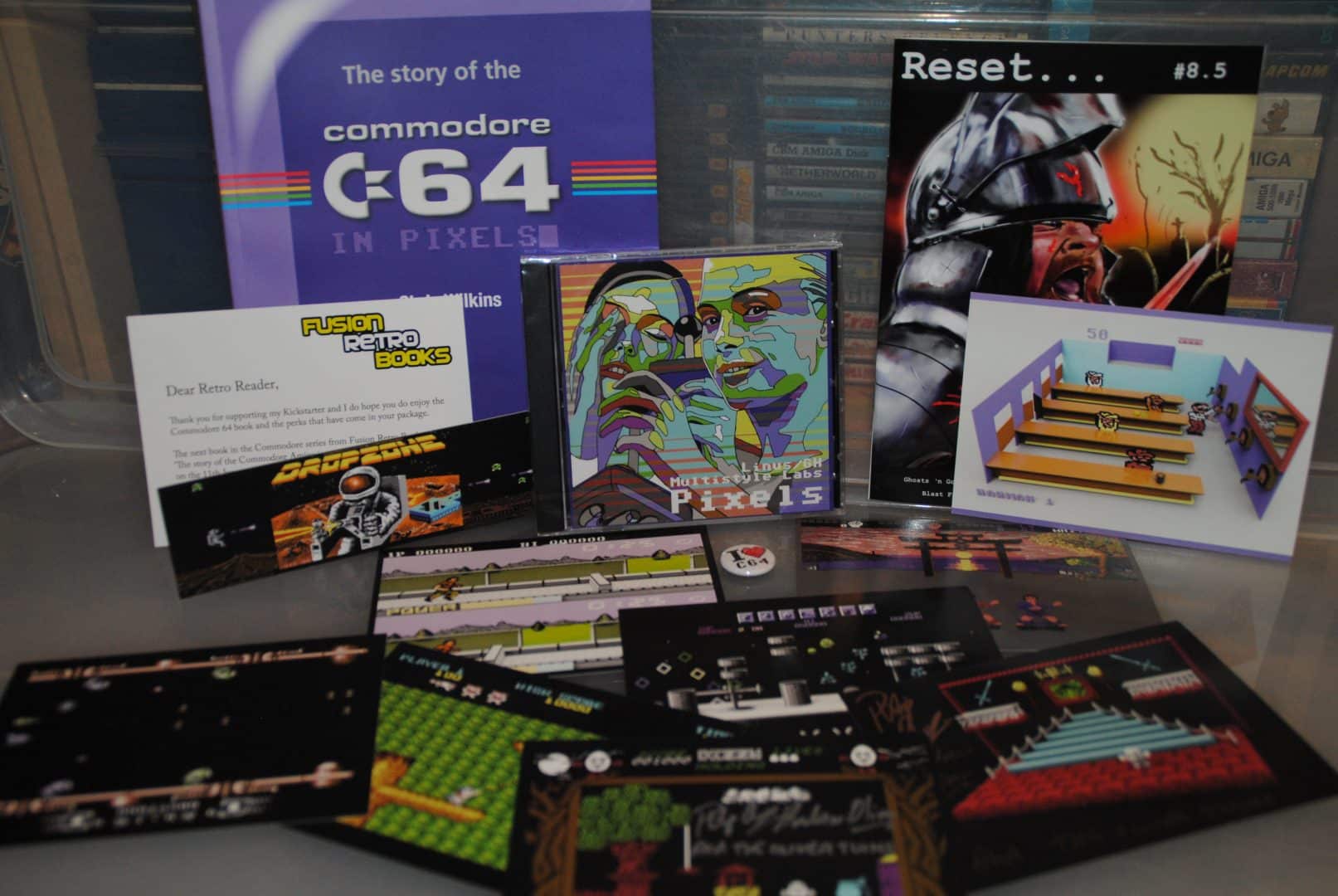 Here you can see all of the stuff i got from the Kickstarter, well worth my money.

The story of the Commodore C64 in pixels book is a fine book, it holds some new and interesting facts and stories, but! that is not the main reason why you should own the book. The reason you should own this book is that of the time travel feeling, it didn’t take many minutes for me before i was back in the early 80s looking through my neighbour’s cassette shelf for classics – things i had totally forgotten about popped up, good and bad memories too.

A simple yet awesome book which every retro head out there needs to have.

8 thoughts on “Book Review: The Story Of The Commodore C64 – In Pixels”