Remember that beta test i was talking about earlier in the week/last week, well this is the one and while i had hoped to put this article up last night when it was released..well i forgot to update myself on the release and i really didn’t want to spoil the release for the developers and the team involved.
Ace Of Hearts is one heck of a sexy game, everything is as polished as it can be for a game of this type and while this game is just a Casino card game, well i think that the presentation makes it a bit more than just another casino game.

The game will arrive for many platforms, Windows, MacOS, Android, iOS and so on and of course, the pricing matches the type of game it is and it comes with a rather good demo too. 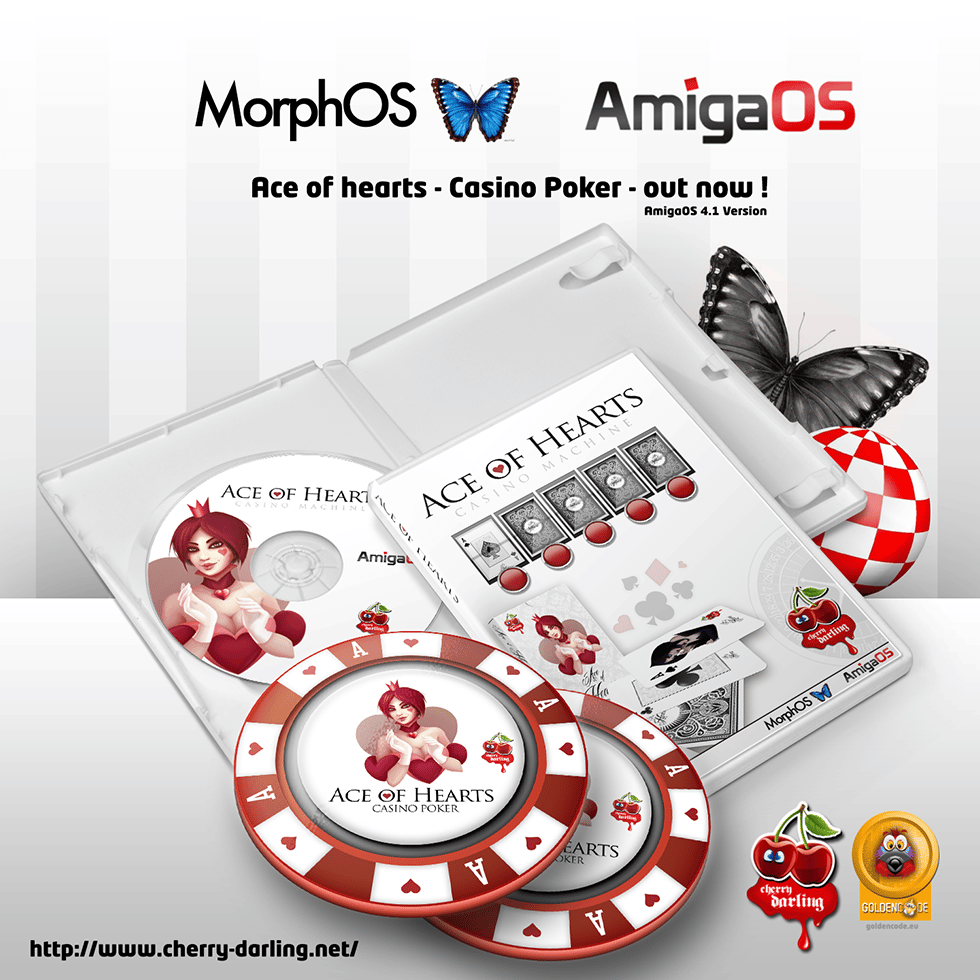 Picture Above: This is the Amiga and MorphOS advert, looks awesome no?

hope to see the CD based release soon as downloadable games ain’t really all that special in my collection, it is very nice to see that the Amiga is beeing more and more supported with stuff and especially when it with design and quality like this one. 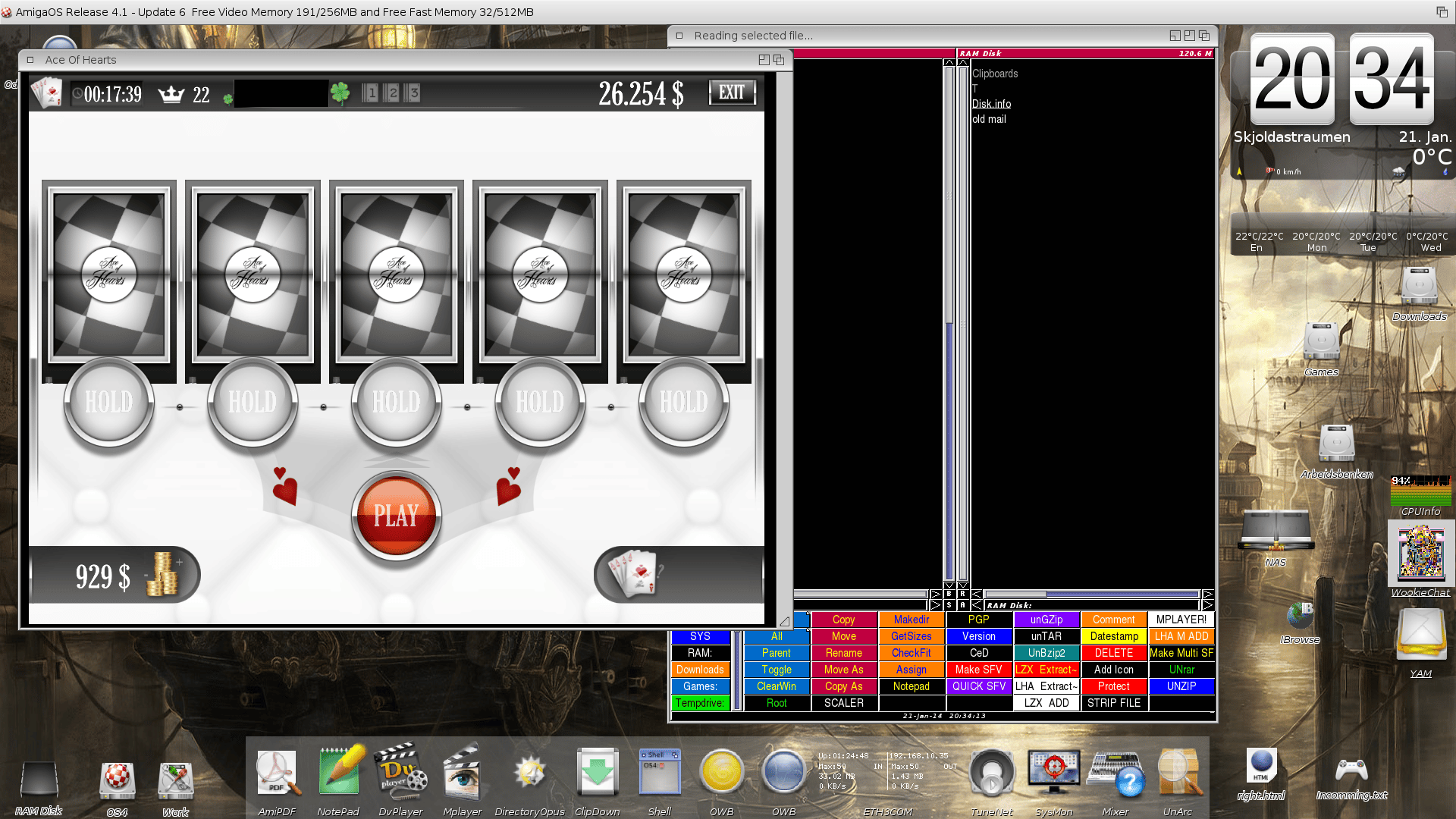 Picture Above: Ace Of Hearts running in window mode on OS4.1, it is fully scaleable but here i am running it in a “small” window as i like to do other stuff at the same time.

Many like to play games in fullscreen and so do i but games like this i prefer in a window mode even if screen switching is ultra fast on Amiga.
Ace Of Hearts run very smoothly on the A1XE here and while this is not the slowest OS4 machine out there it is still very likely that the game will run pretty good on all machines, that said i am not sure if the game works on the X1000 yet. 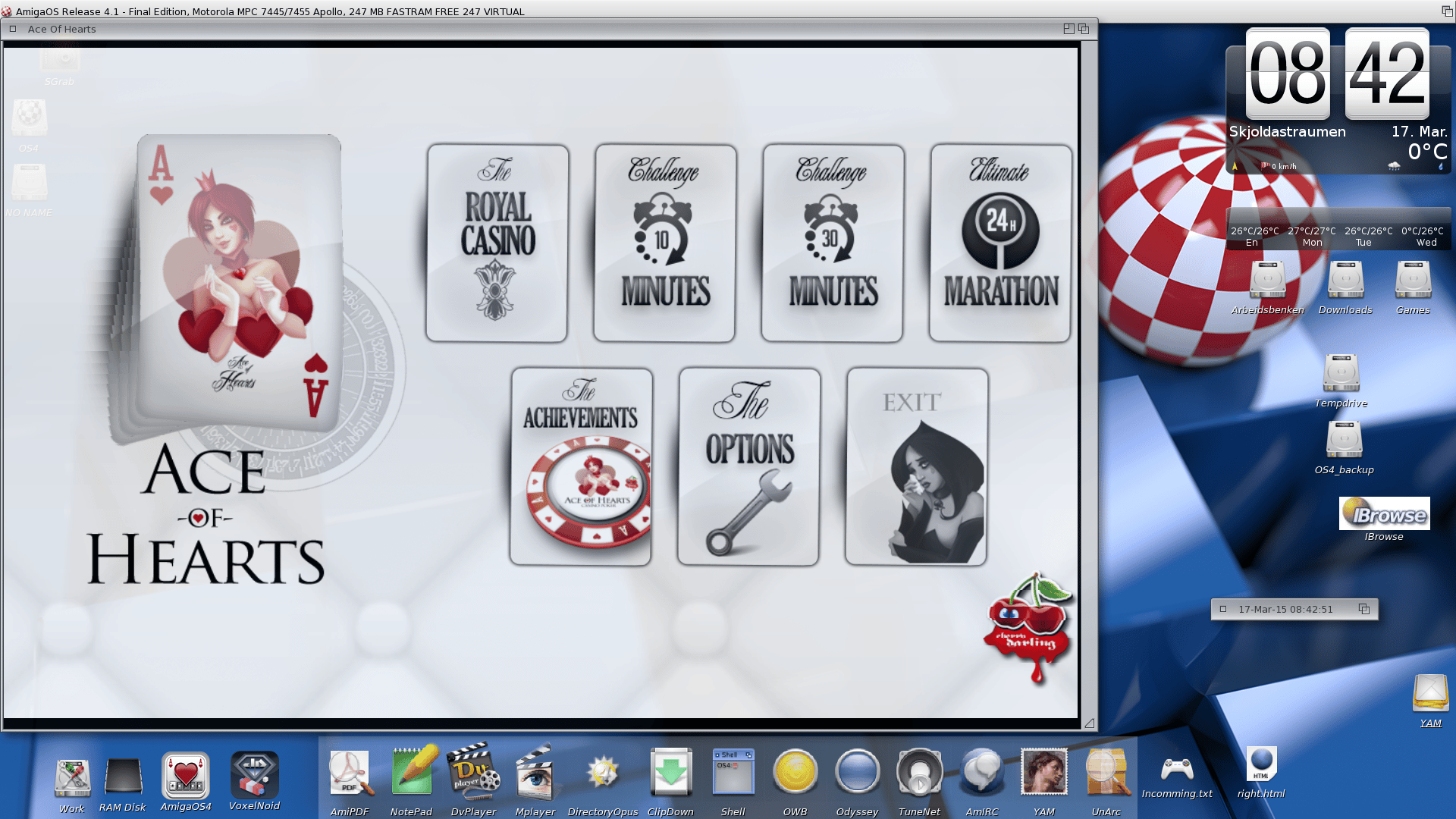 Picture Above: Main menu, slick and great to look at.

Not much to say really, the game is clean, very clean and that is consistent throughout the whole thing, i have yet to see any bugs in this final version but i am certain that if there are any new ones found then they will fix it really quickly. 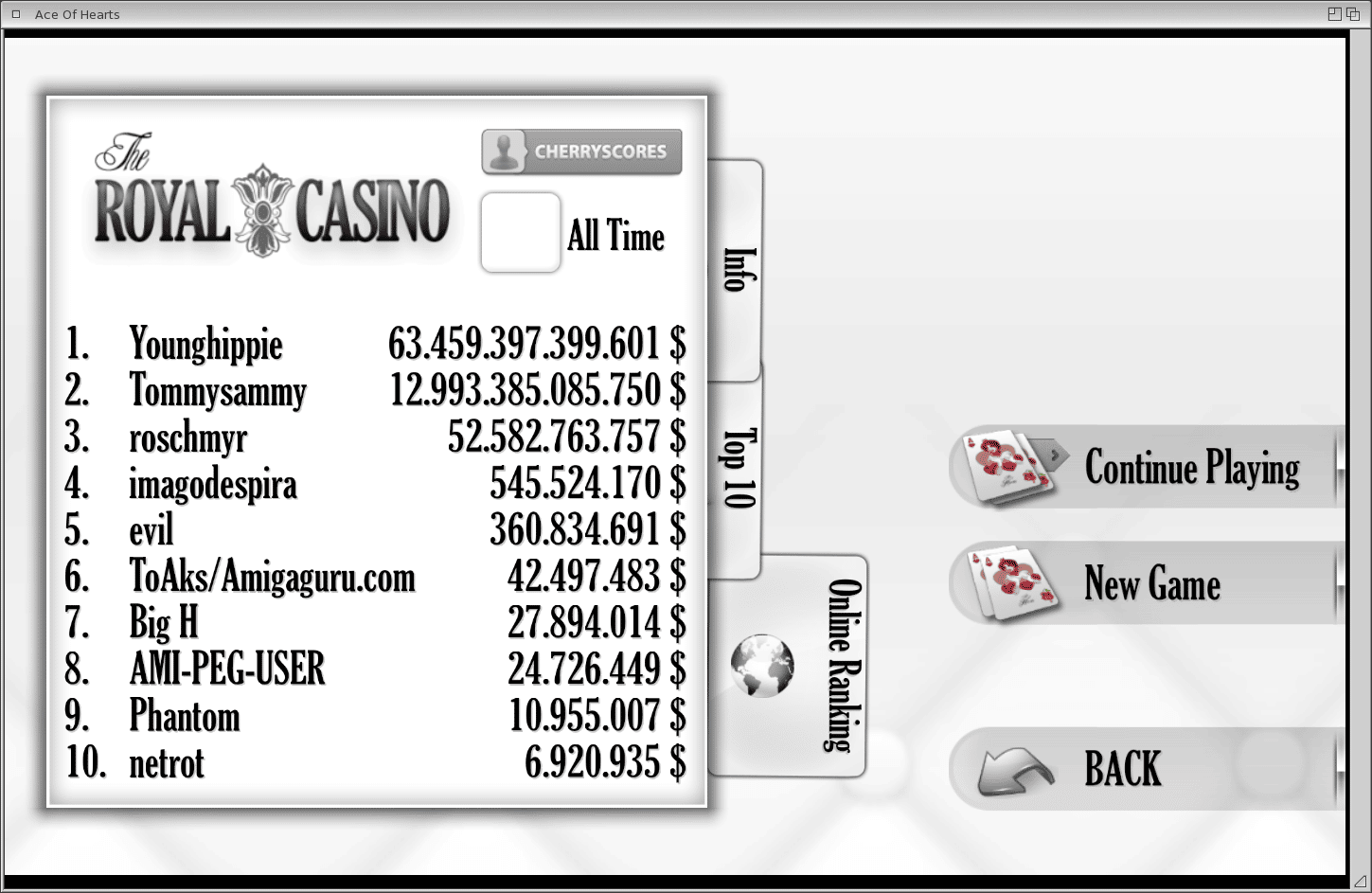 Picture Above: Every game mode has its own high score table, online of course! YES!.

Highscore tables can be quite dangerous…they could wreck lives as its all about being on top, we will see who can stay in the top spot but i bet i won’t be able to keep up but right now i have the first place…oh wait! second now!… ARGH!.
Can’t even think of how quick these lists will jump when the game is released, it is released now indeed but i expect people ain’t fully aware of it yet. 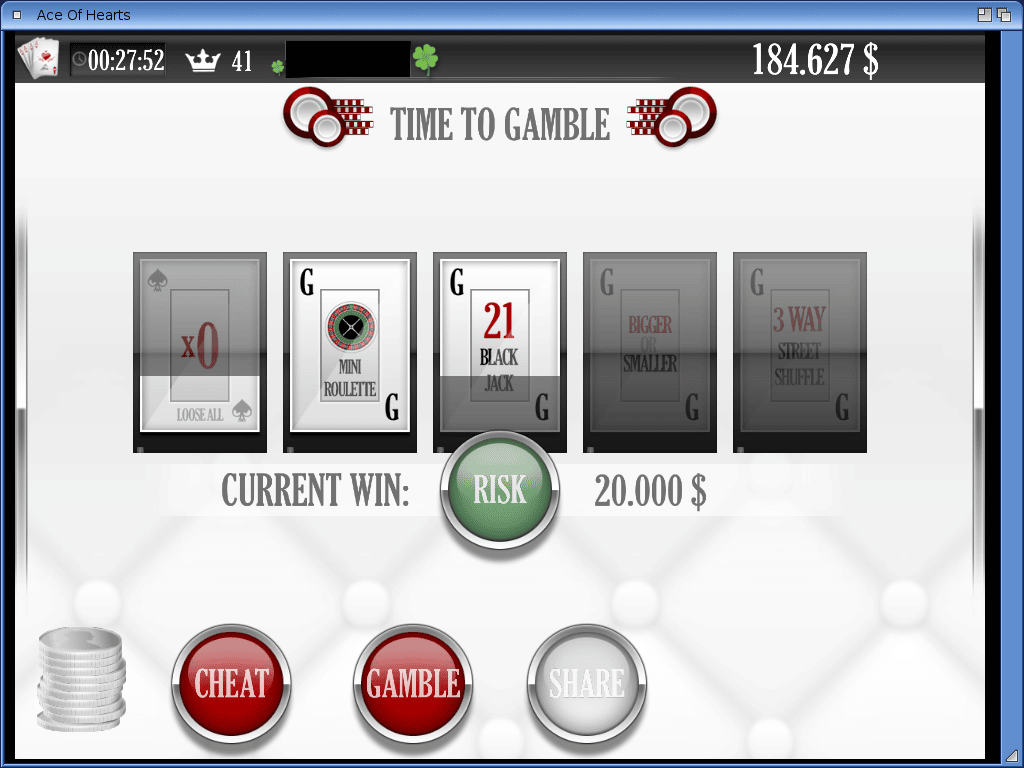 Picture Above: Sadly not every screen is grabbable… anyways..the Cash in and Risk menus are fully shaded and colored.

So the game is a typical slot machine card game and when you win you will get the option to risk your money by play various mini-games. there are 4 mini-games along with a ladder system. 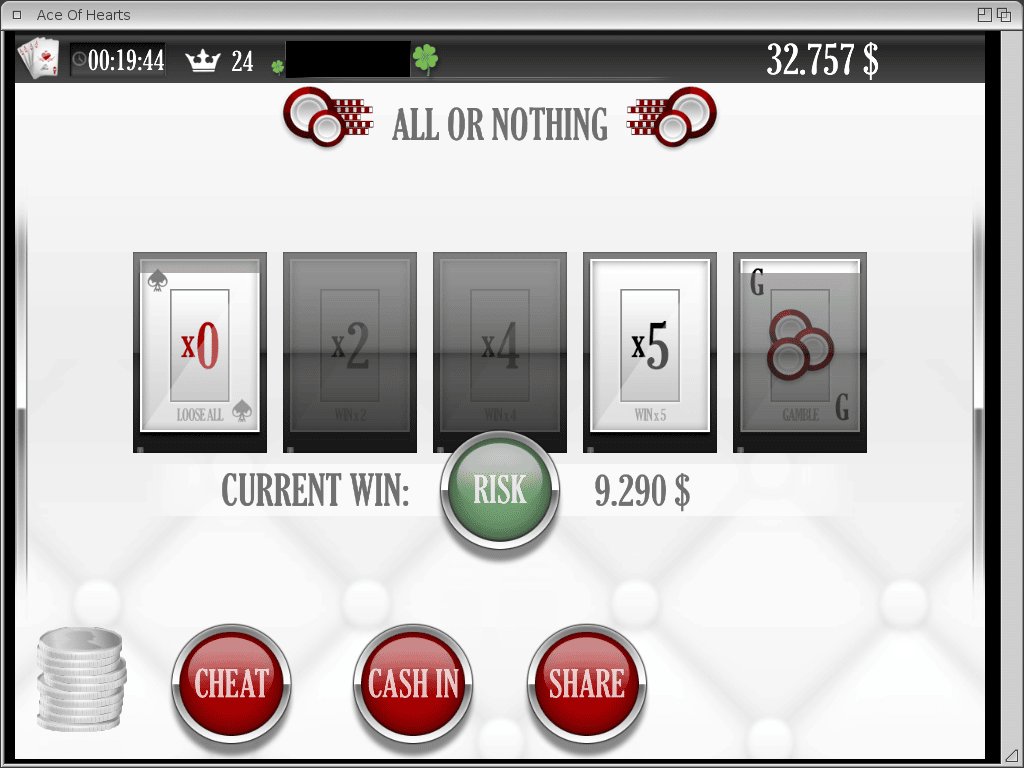 Picture Above: here is the ladder system which i spoke of earlier.

The system works like this, it jumps between Loose all and 2x, if you win 2x then you can cash in those and quit the round, if you want you can risk the 2x and try for 4x and so on…eventually you will reach the end of the ladder to the gambling menu, and this is where it gets fun. 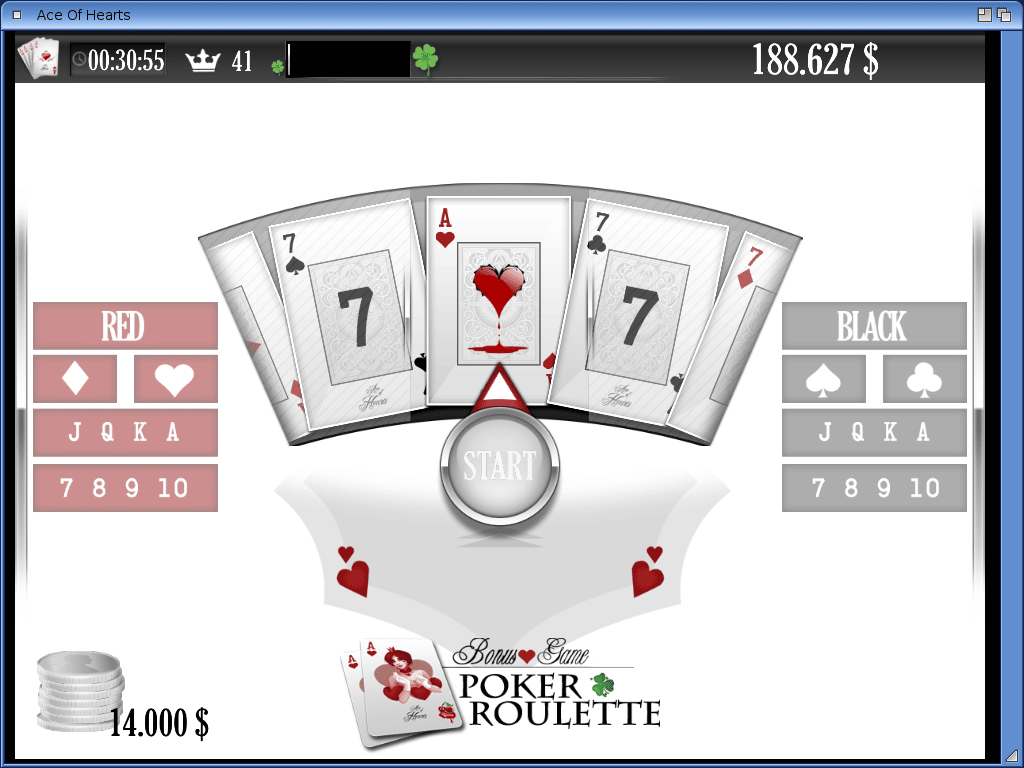 Picture Above: Same type of ladder as above but this time it is about which mini-game you want.

I prefer the 3Way card Shuffle but i am sure others like blackjack or whatever more, it’s all about taste and every one of them are hard to win anyways.
That cheat button is not in the game, it is only part of the developer version so stop looking for it already!. 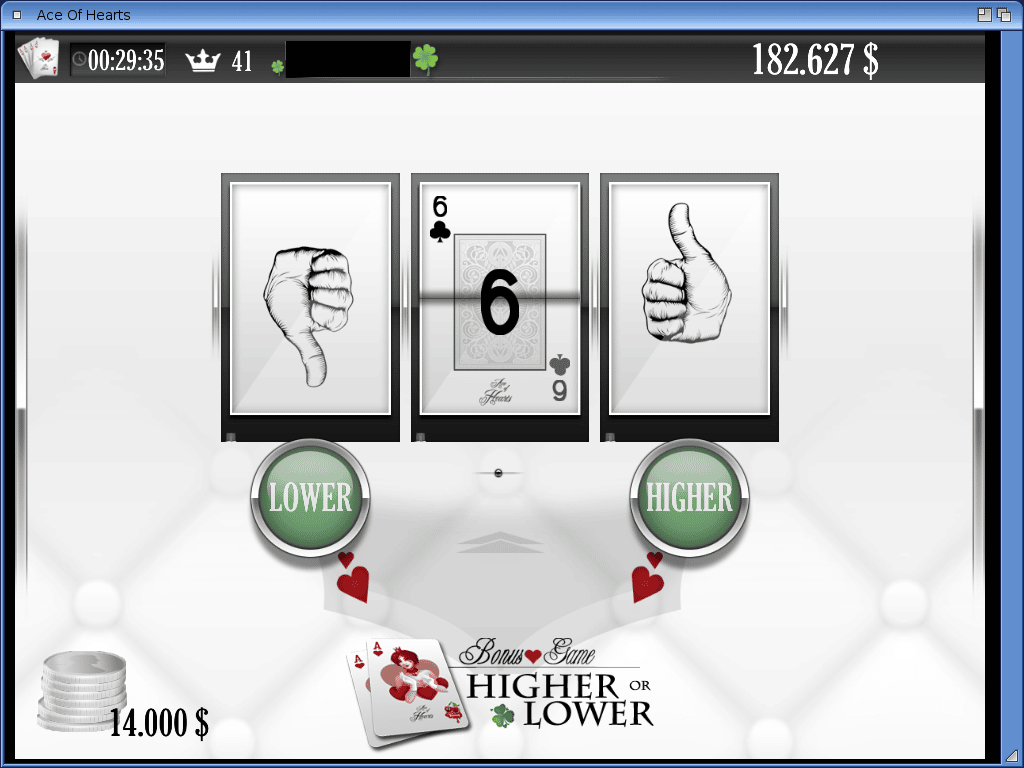 Picture Above: Mini game in action, this is high or low, standard fare.

Not much to say really as this one is self-explanatory but anyway if you lose then all the money from the complete round is gone (14.000 in this one).

Picture Above: another mini-game, this time the roulette.

Ok so this is it, the game as you can see (there is more too but i think there are enough screenshots for now) is very good looking and it is so in Full HD too, the game offers Achievements, loads of them actually but yet again they are not using the Amiboing system so there’s no way to compare achievements with others in the game…for now.

The game is cheap so there’s no excuse to not buy it and if you don’t care for these type of games then you should at least try the demo, these guys need your support and we need them to stick around on the Amiga too.

You can download the demo, buy the game or just read more about it at their website located here.