More free stuff?, yep another Loot Crate arrived at Christmas 24/12. This time it is the December 2015 one, i wrote about one last month and that was the November 2015 crate. The theme this time around is Science Fiction/Galaxy and that ain’t all that surprising really, you know, being the month of Star Wars – The Force Awakens. 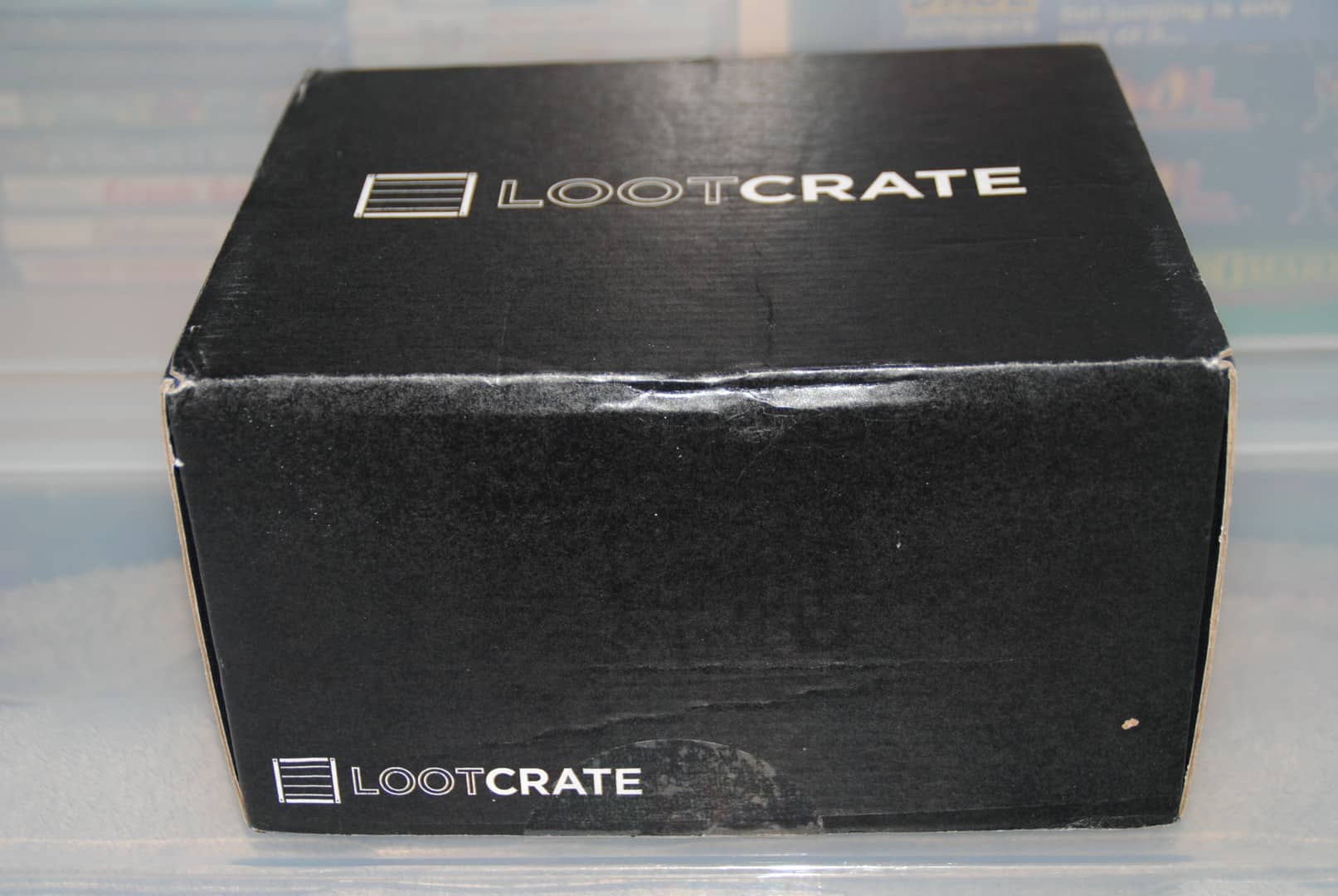 This time around the box is double the size of the one i got in November, so far i have not looked inside the box and i will try and share the experience with you. I hope there are fewer stickers this month, while those from last month was cool, i still won’t ever use them. Oh well, time to pop the hood and have a look inside. 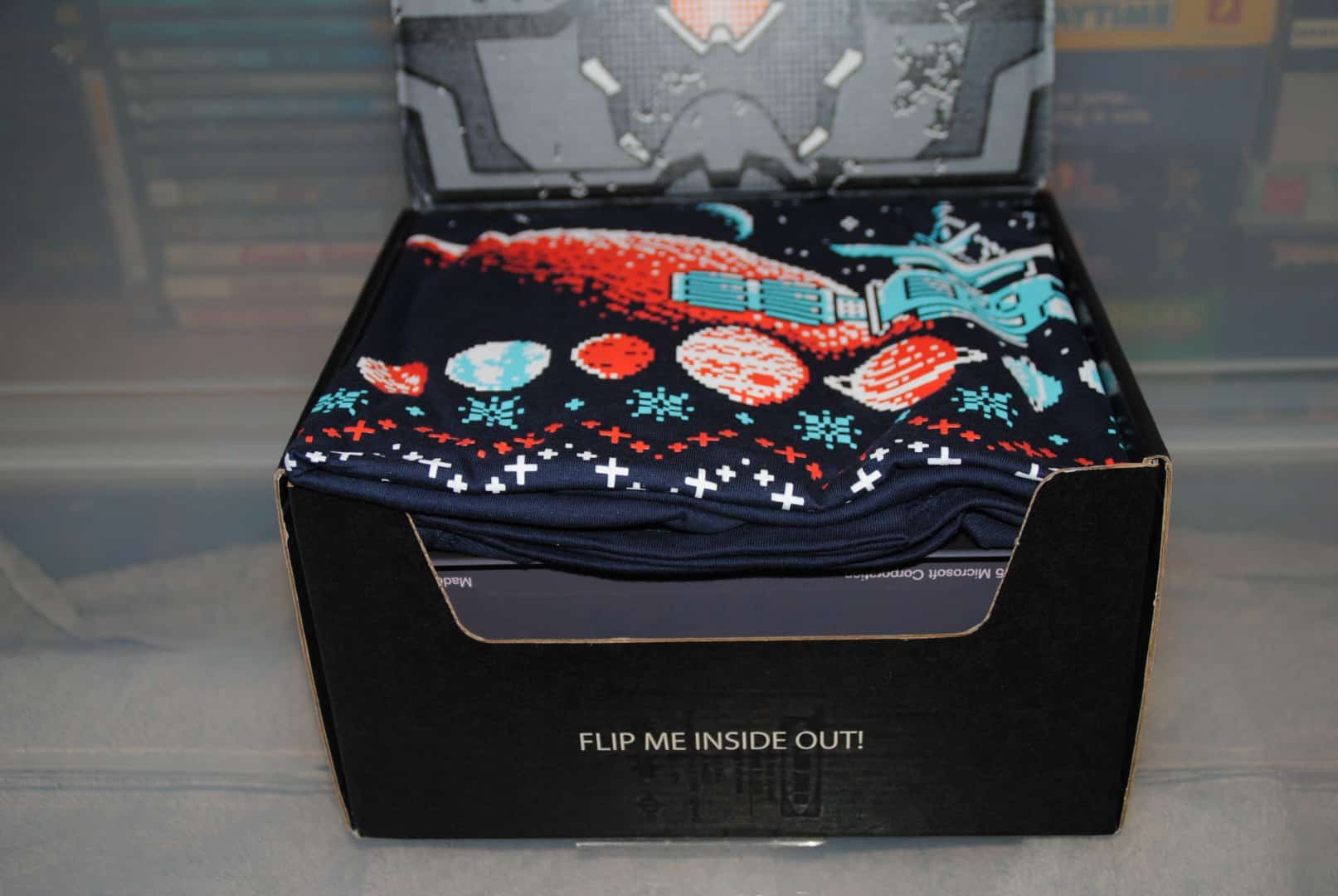 What on earth is that? looks awfully retro and umm colourful. Is this my first LootCrate T-Shirt? is it a tablecloth, is it a skirt, a curtain perhaps?.

One thing is for sure, its colours make me quite certain that this might not be something that i will put up on the wall/over the window or even on me. 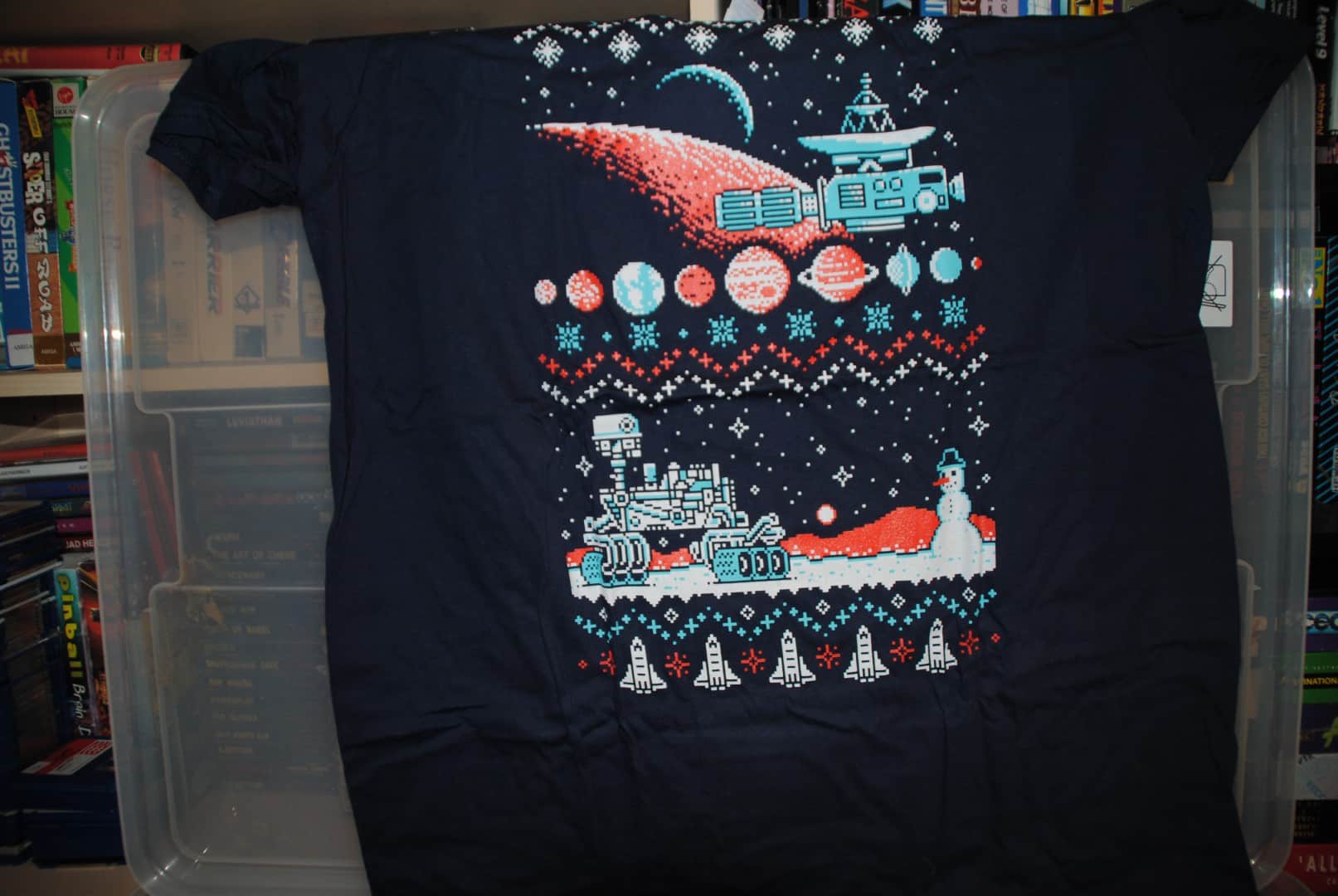 Taa-Daa, it is a t-shirt, i have no idea wherefrom the image comes from, it might be a game or a movie or whatever.

A snowman?. 5 spaceships? a rover, what the hell is this.

I must admit that once folded out the t-shirt looked better, i will wear this for sure even though i know i will piss off my girlfriend. 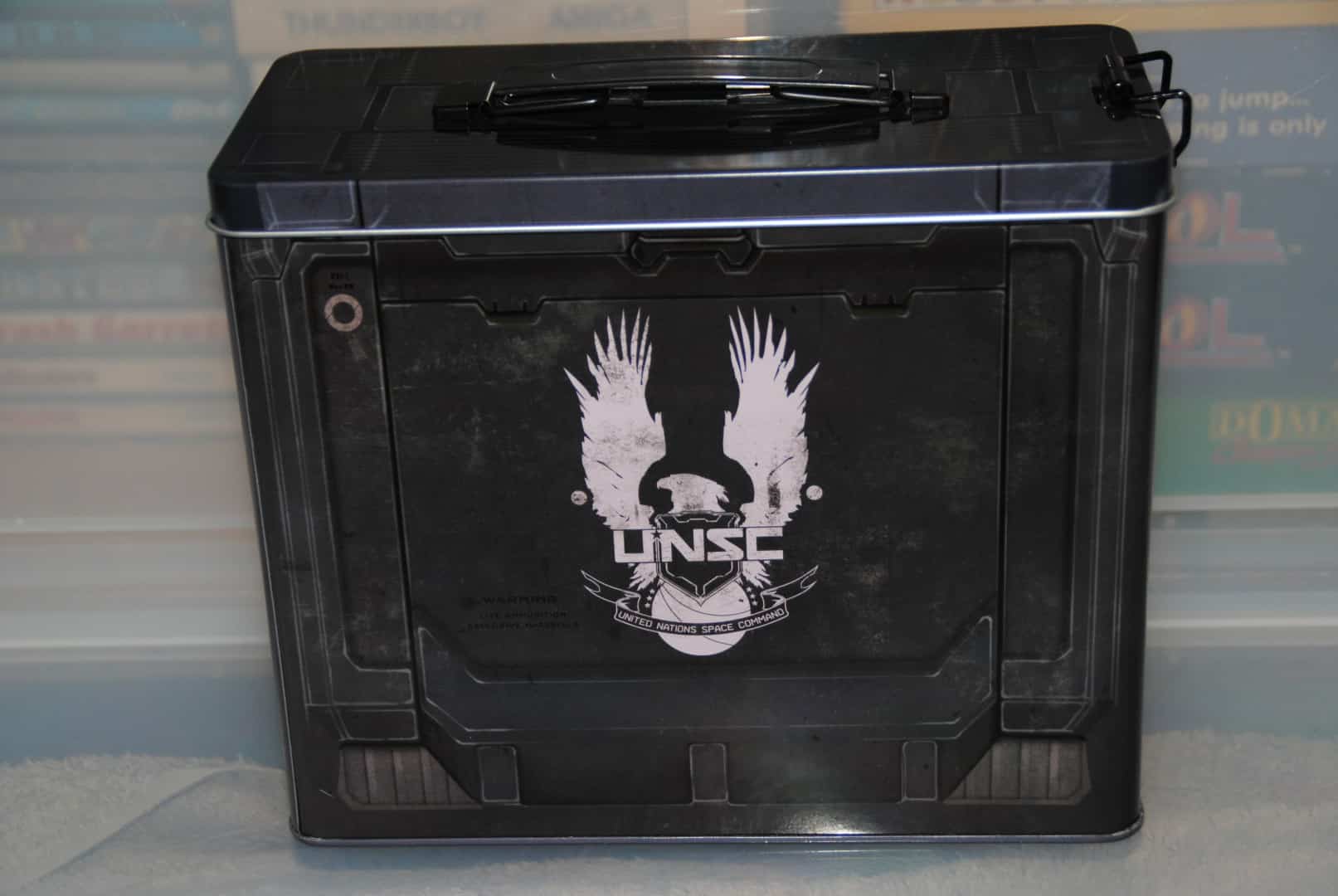 Underneath the t-shirt was this box, tin-box/metal or whatever, looks awesome and totally unexpected, feels like something is inside of it.

For Microsoft gamers out there this box is probably a proper collectable as that UNSC logo means the box comes from none other than the HALO franchise.

Time to look inside. 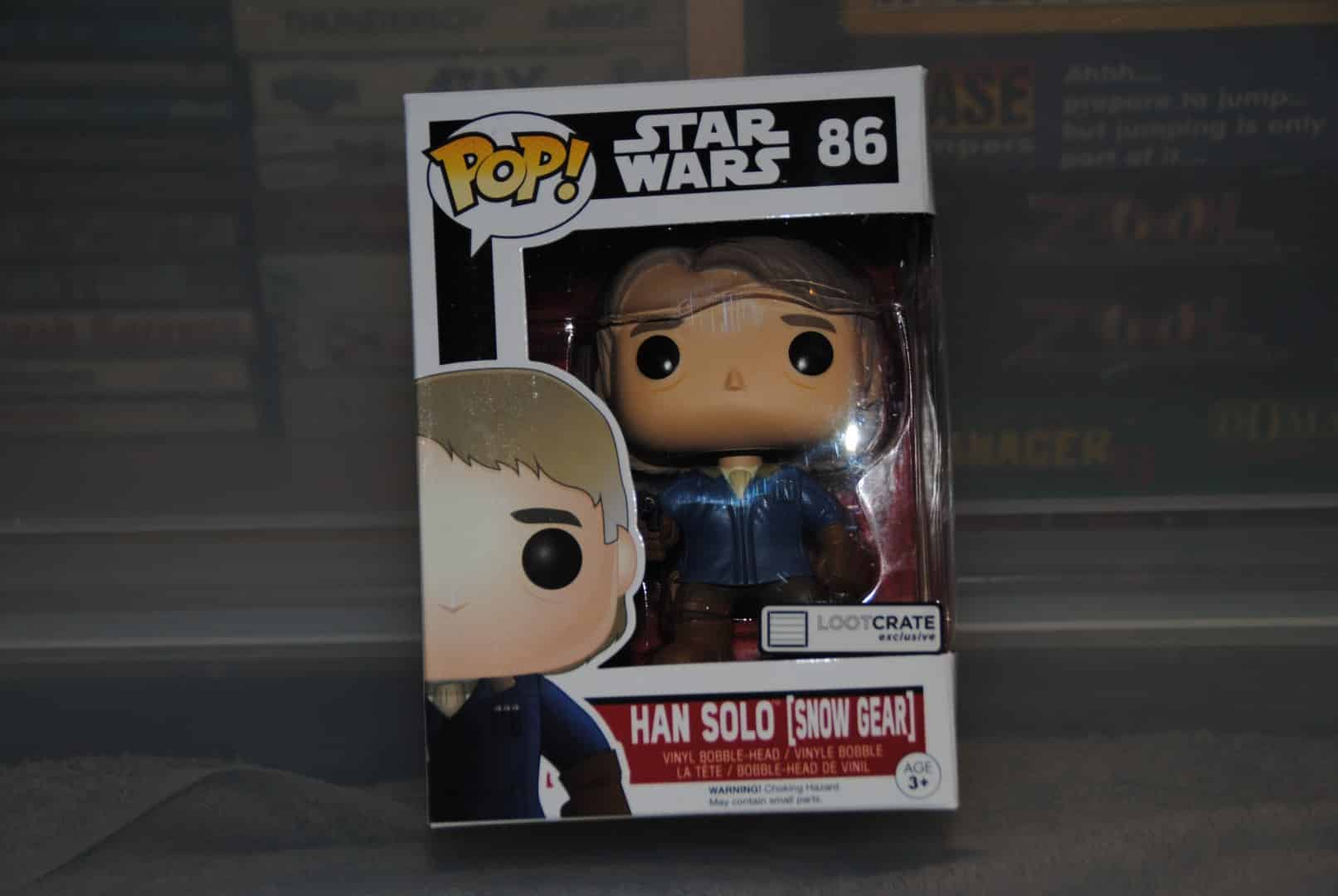 Bubble Head time, a figurine from the PoP! series and of course it is a STAR WARS one. Han Solo in a snow gear and the figurine is exclusive to LootCrate. 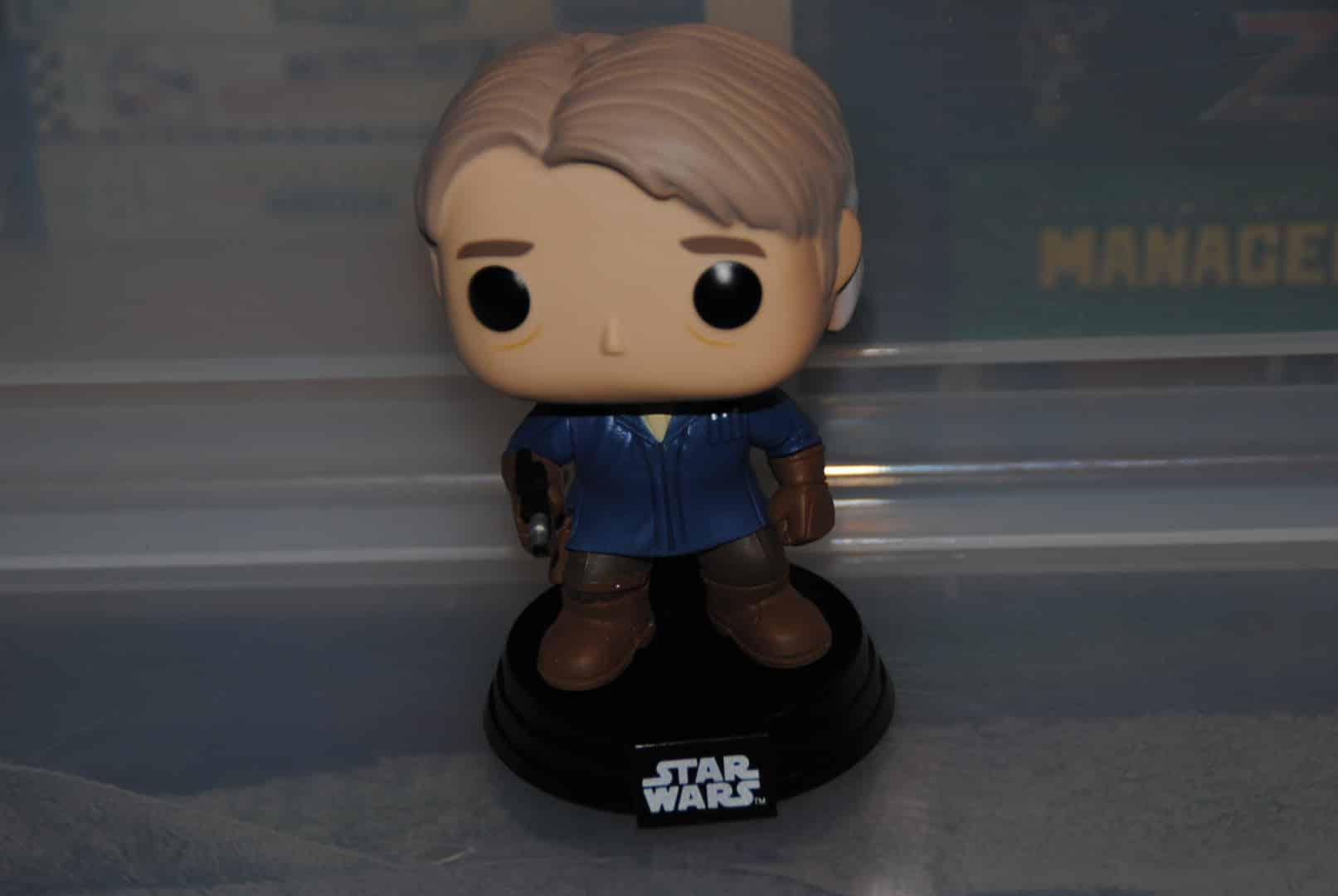 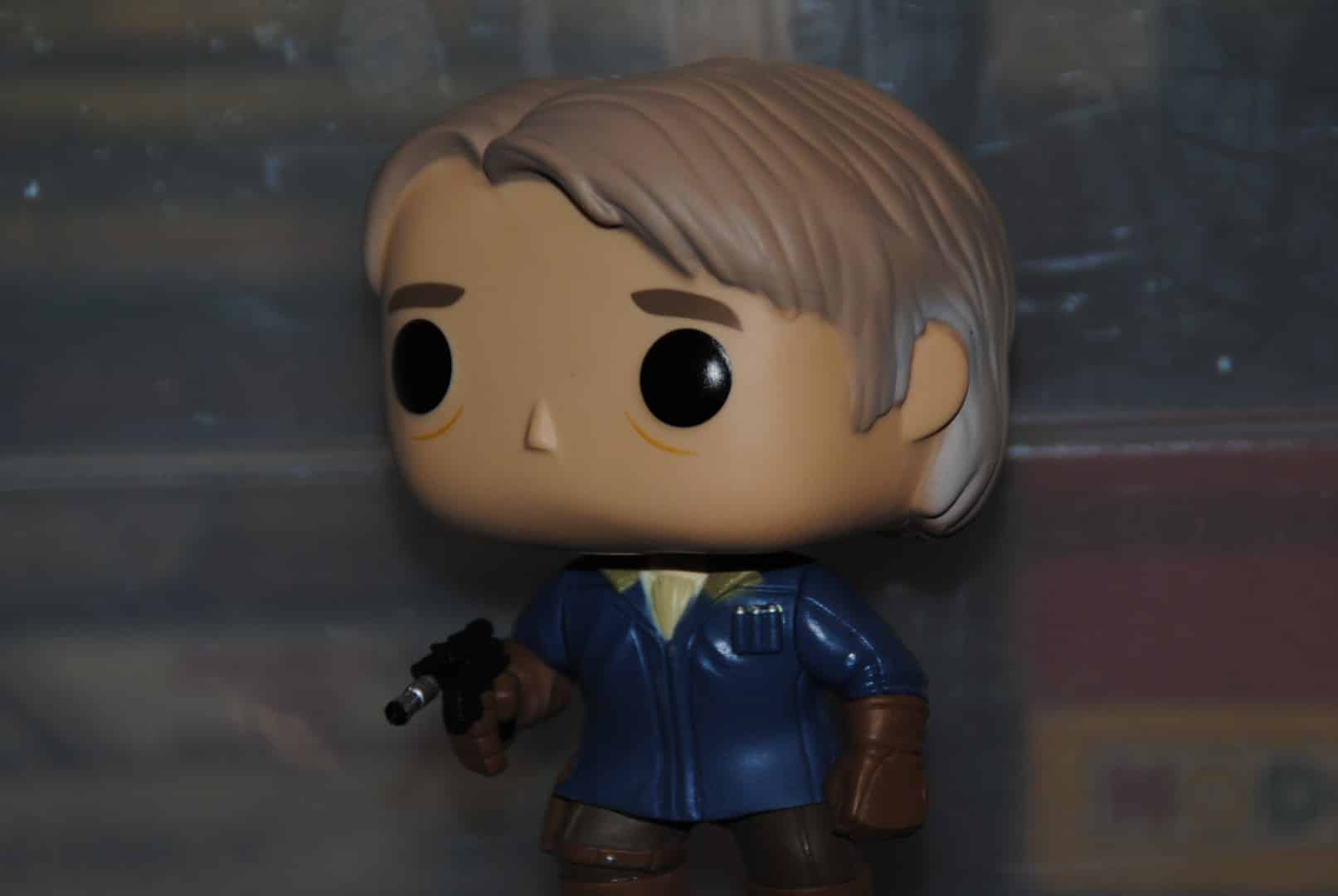 I have no idea about you guys, but this thing looks nothing like the real deal if you ask me. Is that the point? , i am not into these type of things so i honestly do not know.

Unlike the Fallout bubblehead from last month, this one looks strange, boring and not really something i would want on my shelf.

Time to move on to the next item. 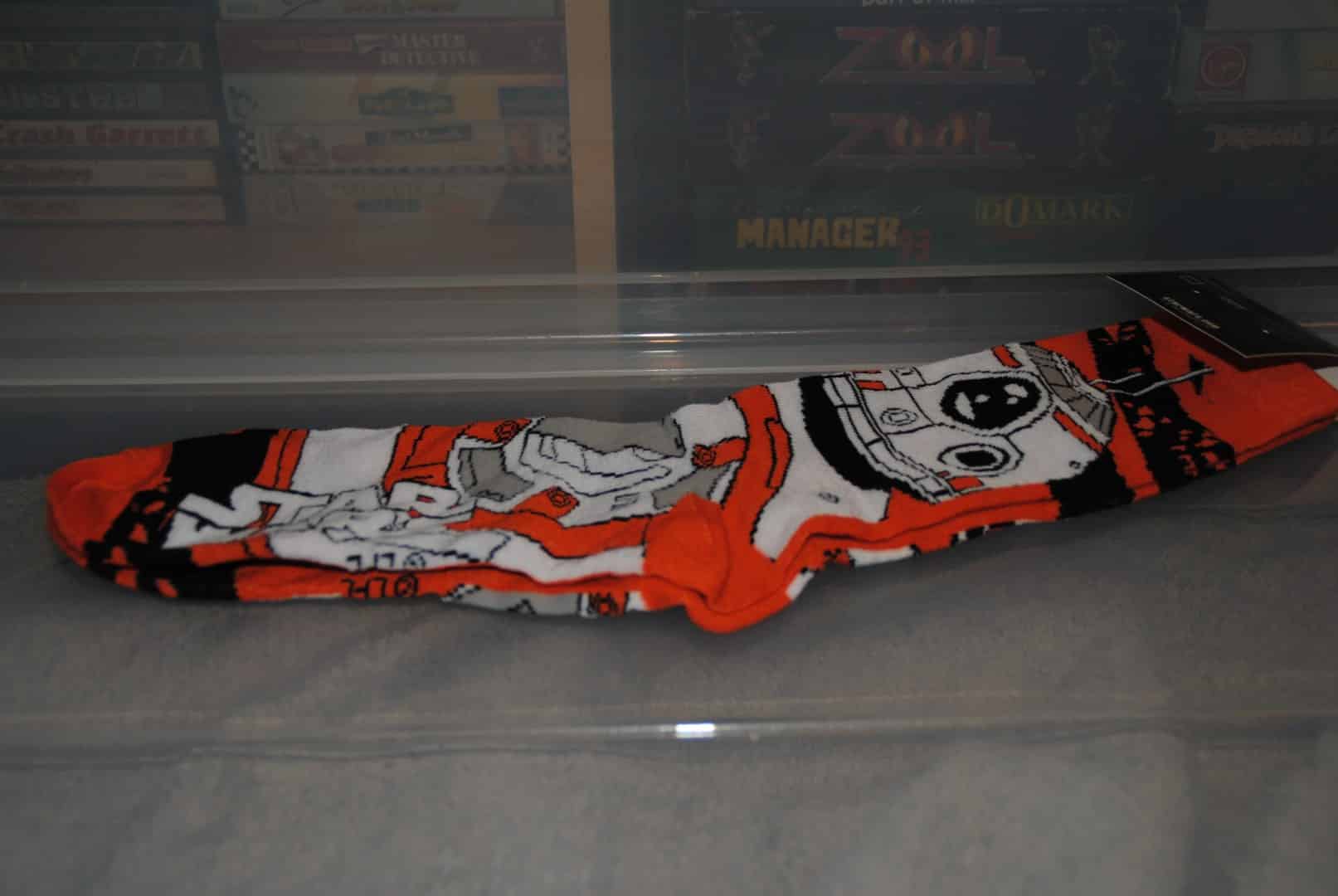 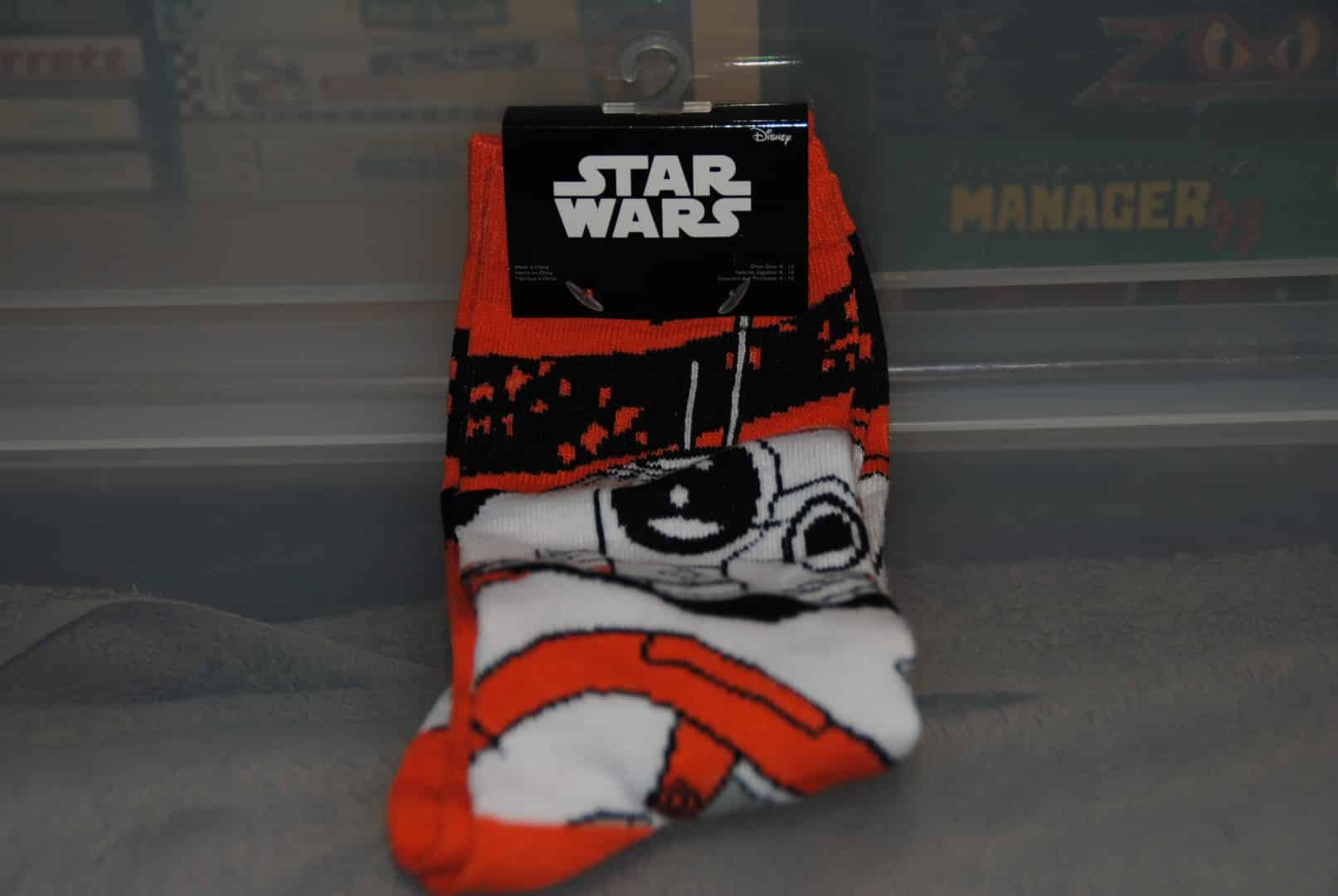 Woohoo!, socks!. This is my first pair of socks for Christmas in 20 years or something. and do you know what? i love them!.

Orange is “so me”, i will most definitely use these whenever i can. Size 45 too, perfect. The colour will not go down good with my girlfriend but hey, i love orange and yes i will risk it. 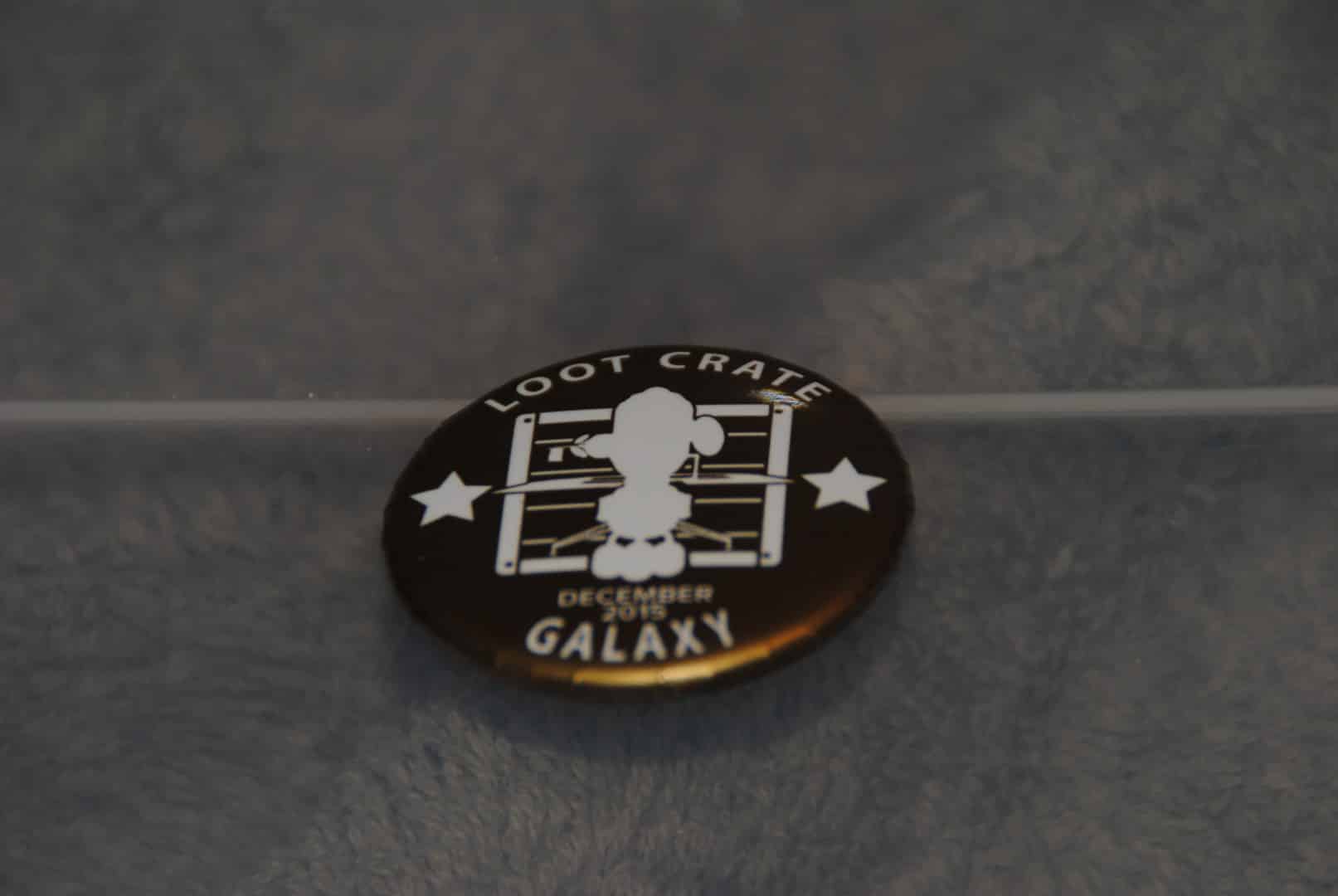 In last month’s article i mentioned that i was unsure if there was a pin in each box, i guess i got that confirmed now. I guess i really need to get a pin/badge wall heh. 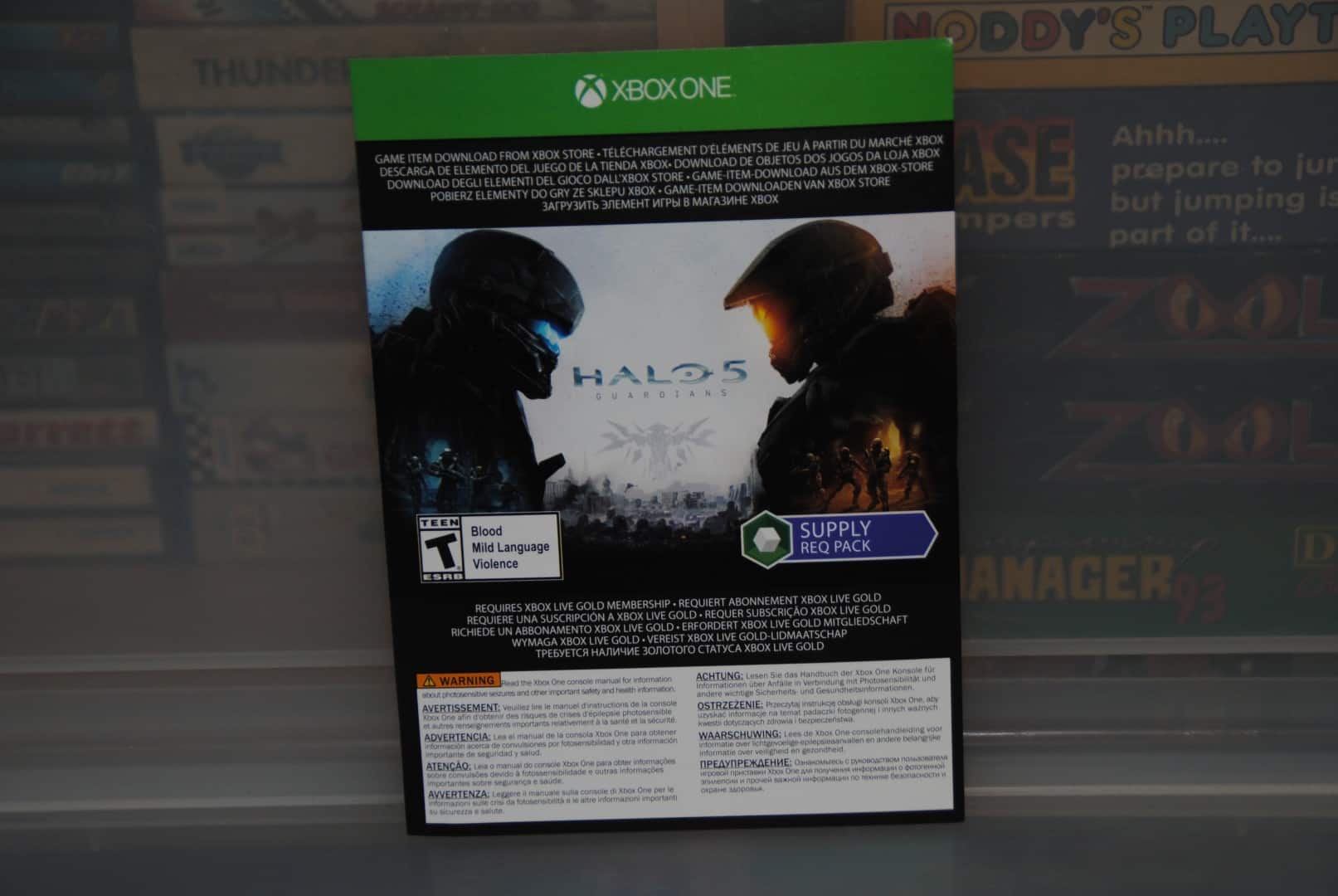 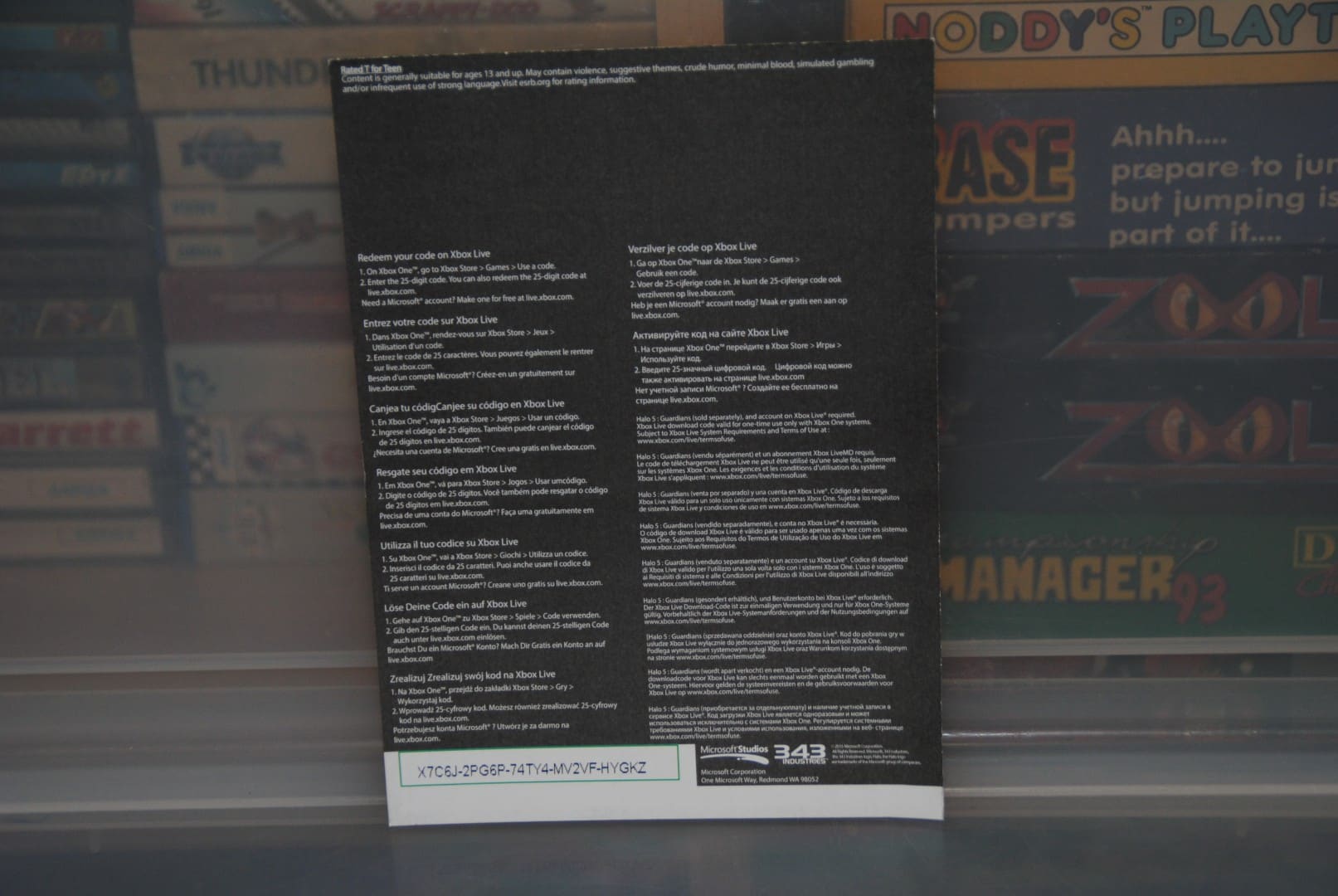 HALO 5 time, the flyer has a DLC code on it and as usual, i never use the codes myself so this is up for grabs for the first guy that use the code on XBL.  Enjoy.  I hope i will hear back from the gamer who got the code. 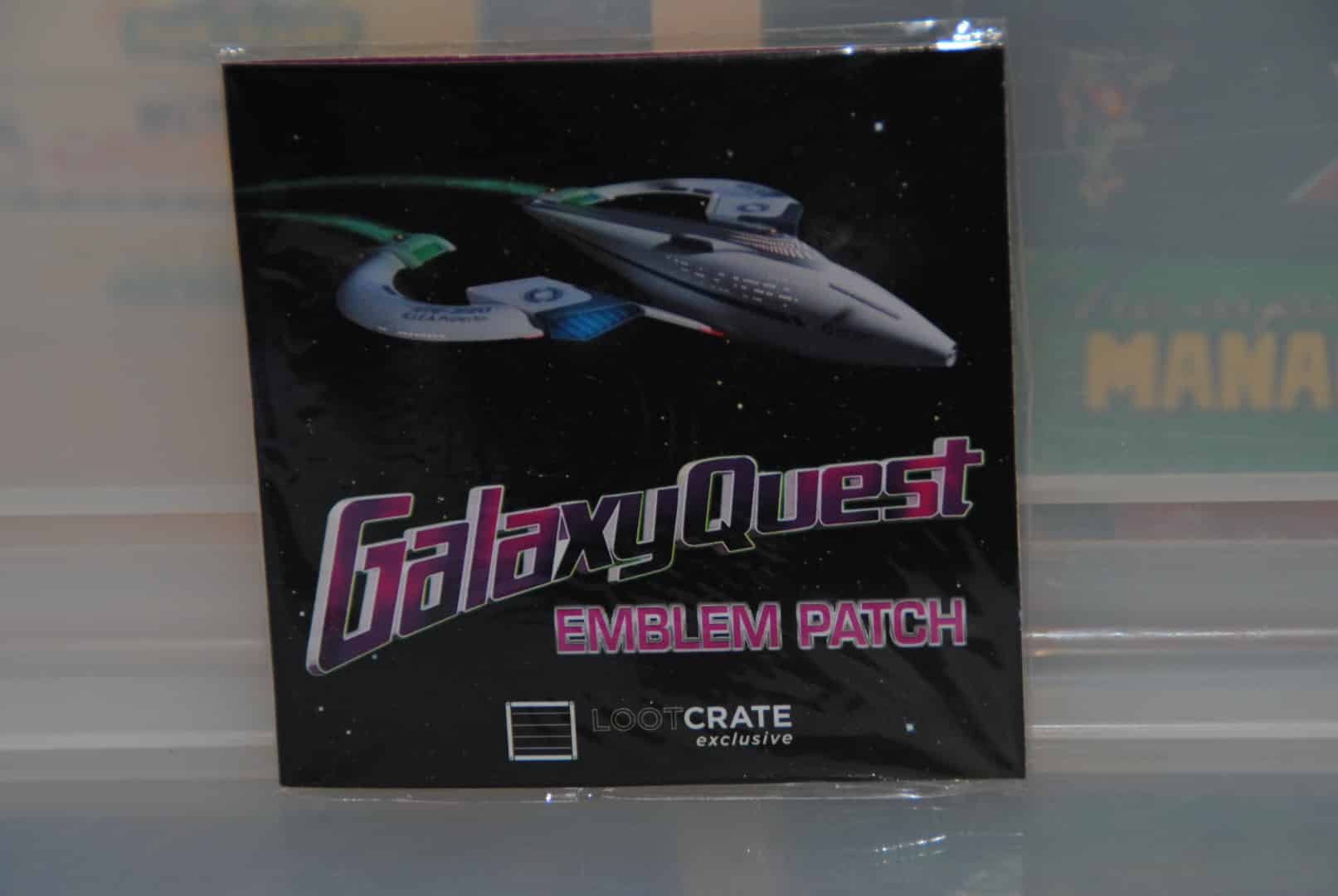 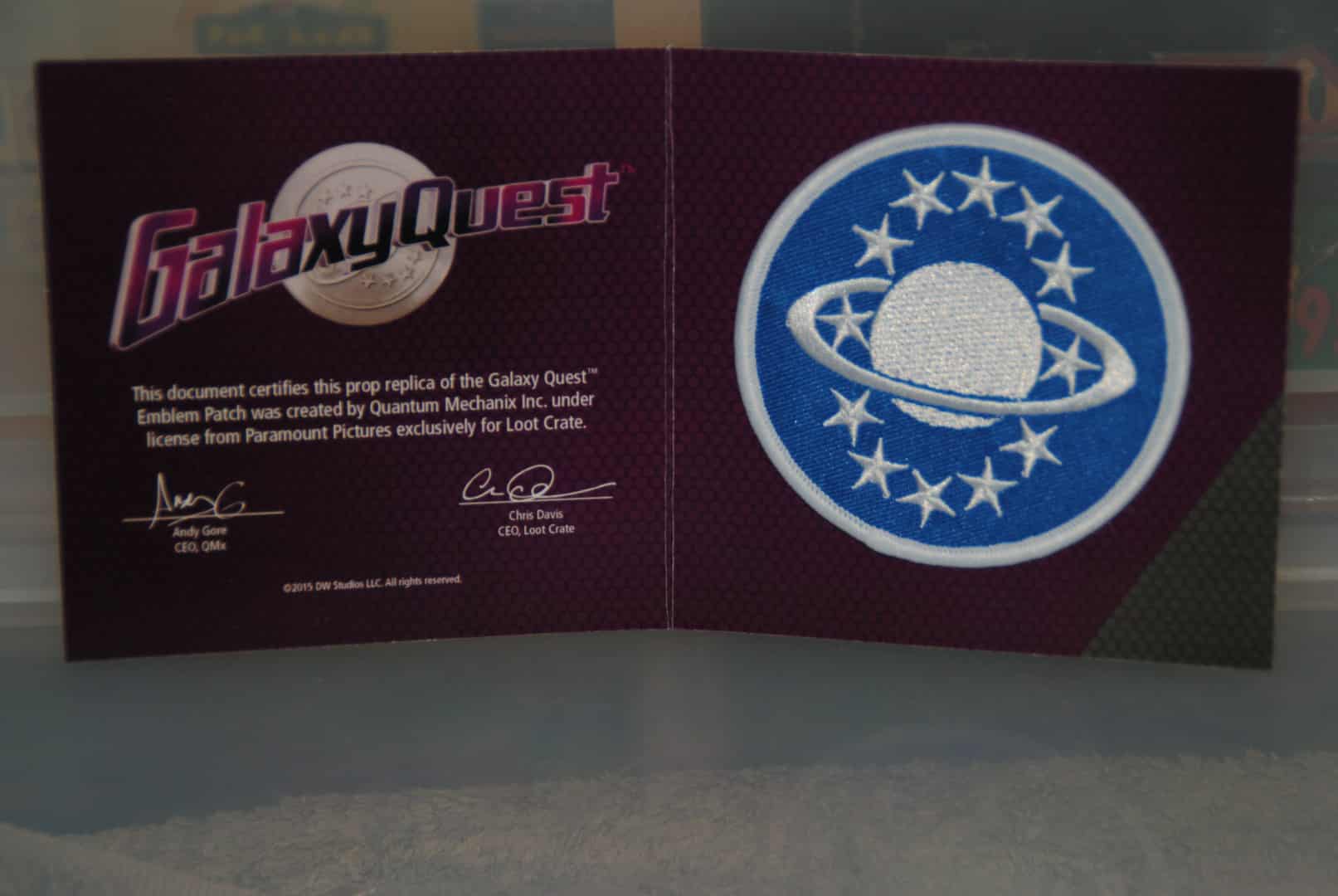 Cool, i thought this movie had been totally forgotten by now… Galaxy Quest is one of my all time favourites, and one that i do not understand why there never came a sequel to.

This month’s crate comes with a Galaxy Quest Emblem patch, you know… those things that you have to iron onto your clothes or whatever. Will i use it? never, but it is certainly cool. 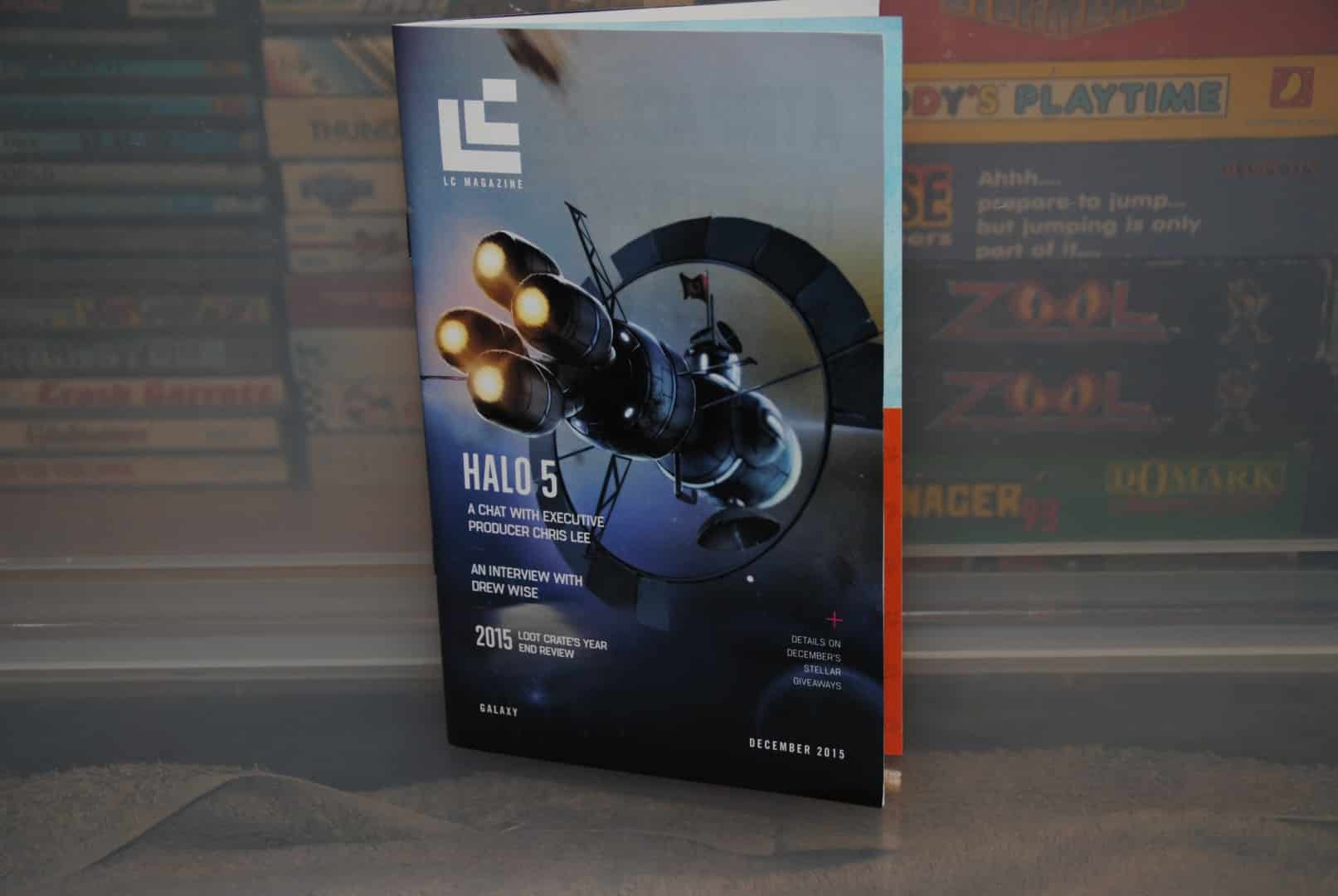 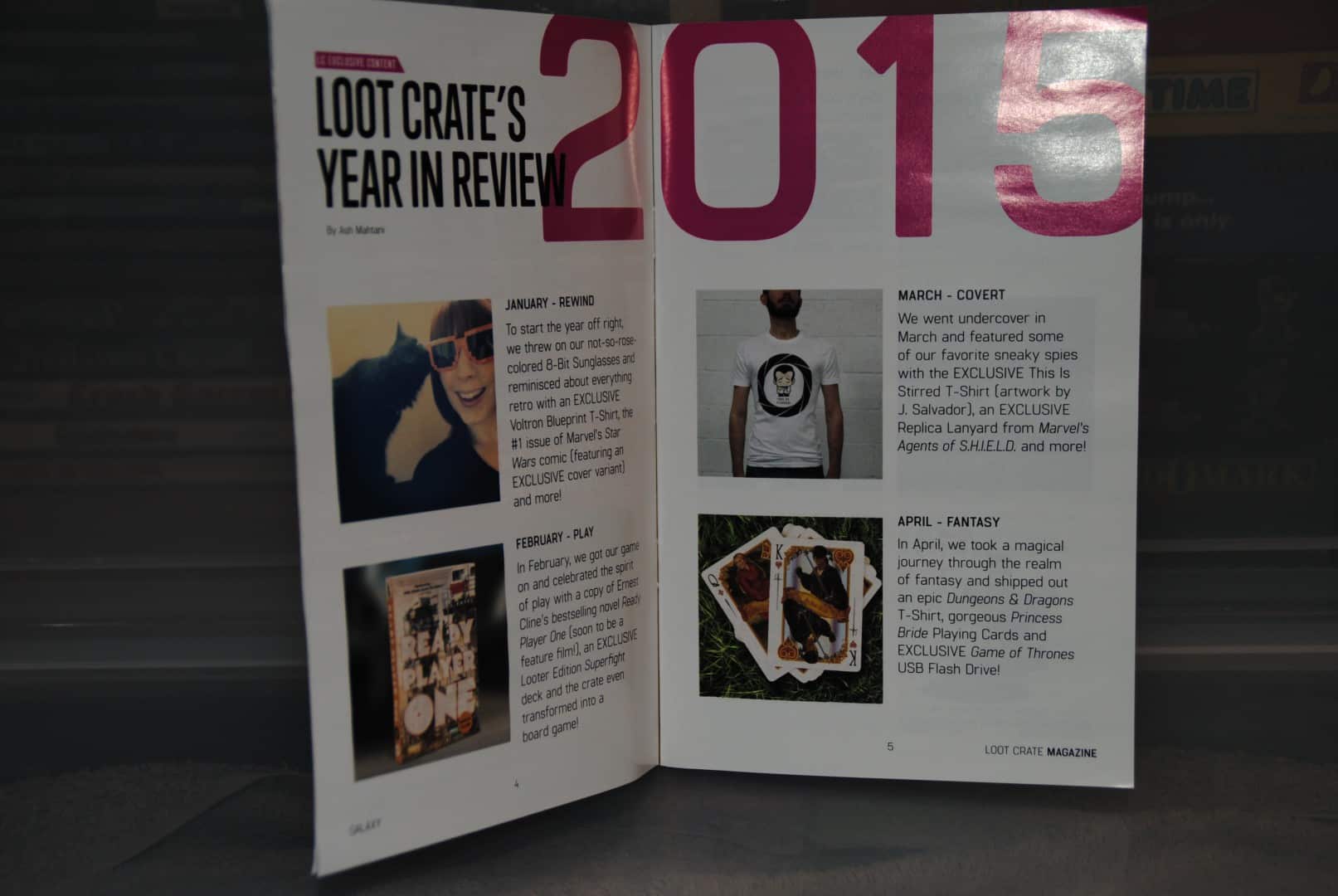 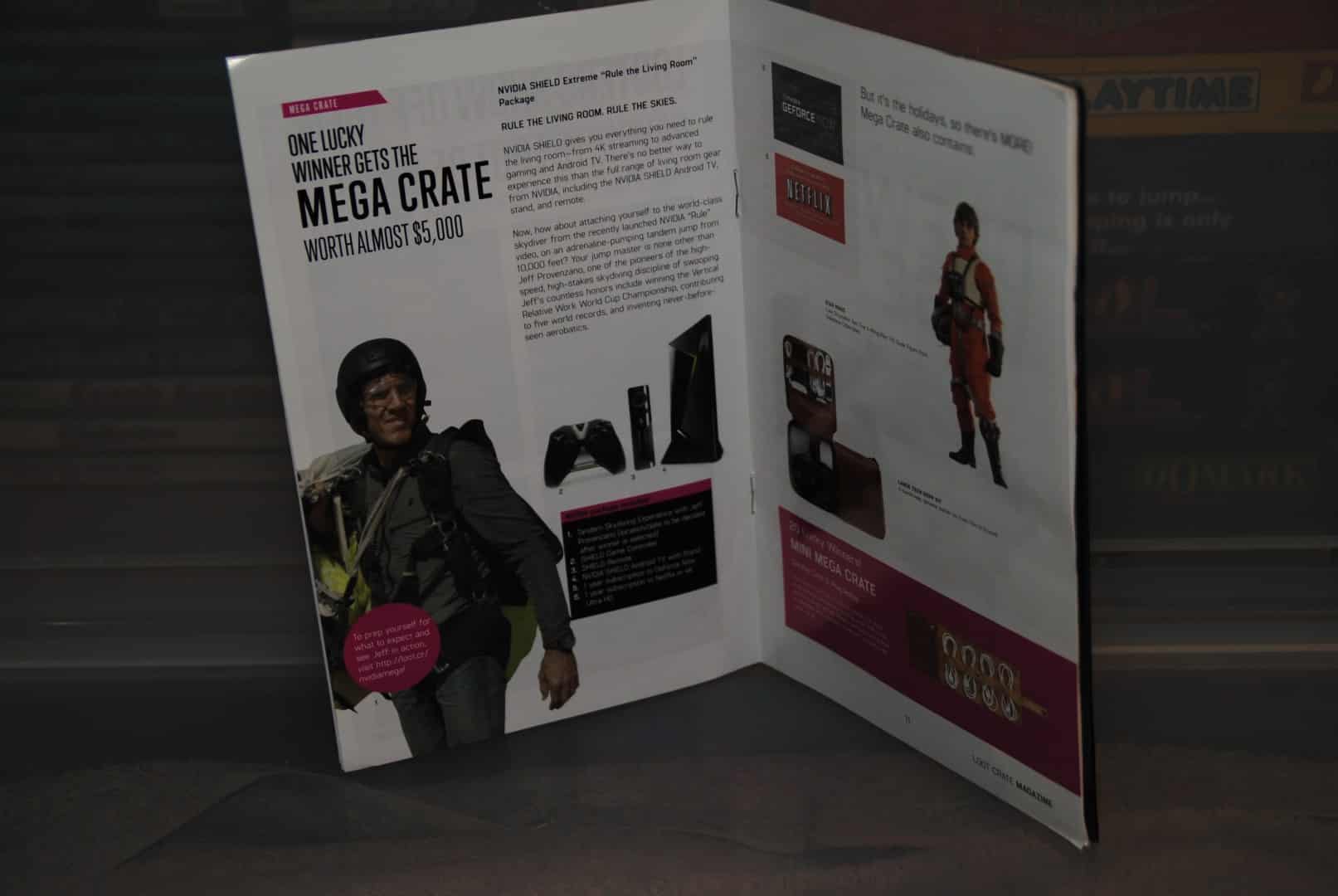 The booklet/leaflet is like last month (probably every month?) a description of everything included in the LootCrate and why. Great quality and the design is quite above the norm you would expect from these things. 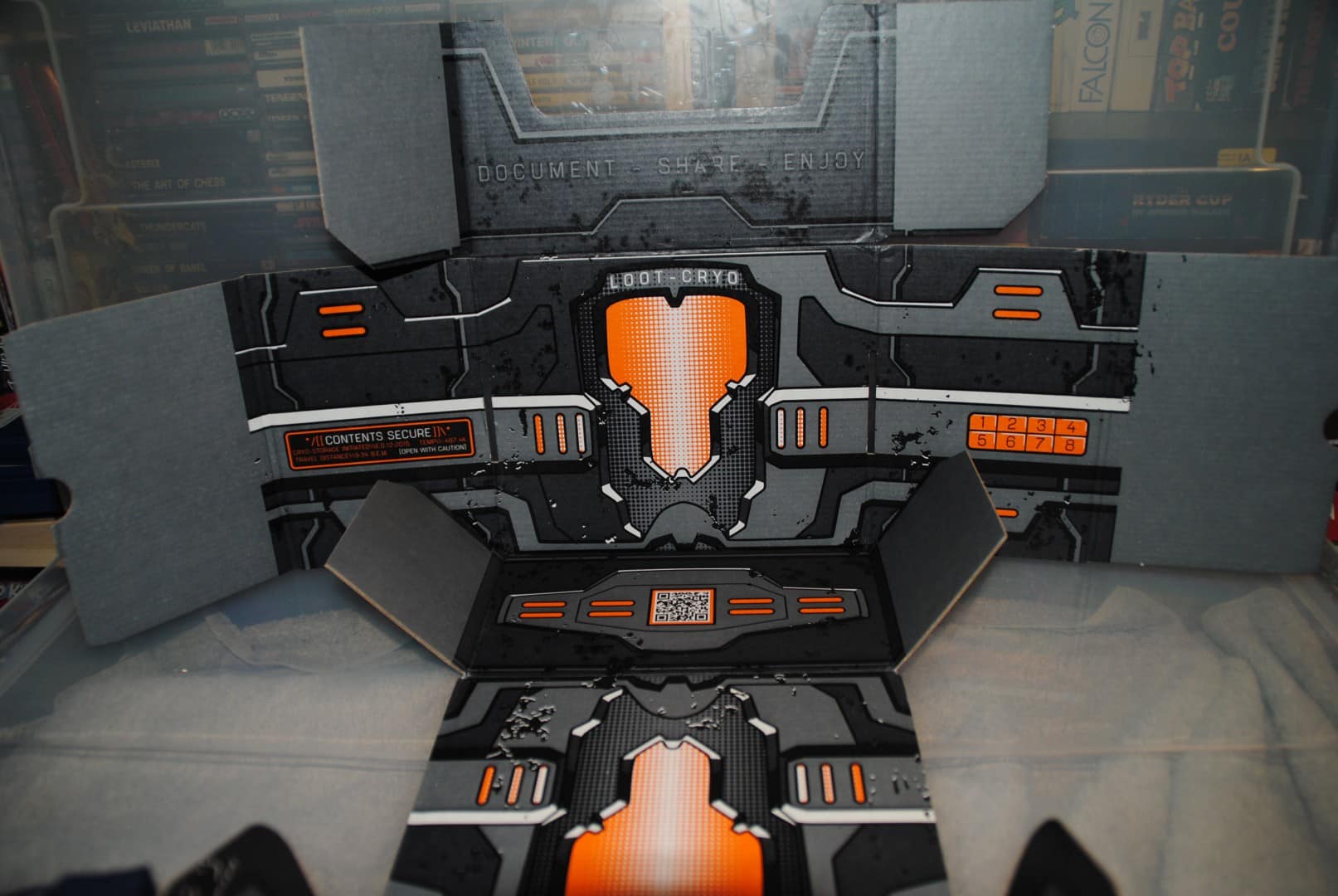 This is the actual box folded out, same box design as last time.  This months picture looks like a Cryo chamber, cool looking and all, but i think the one from November was much better. 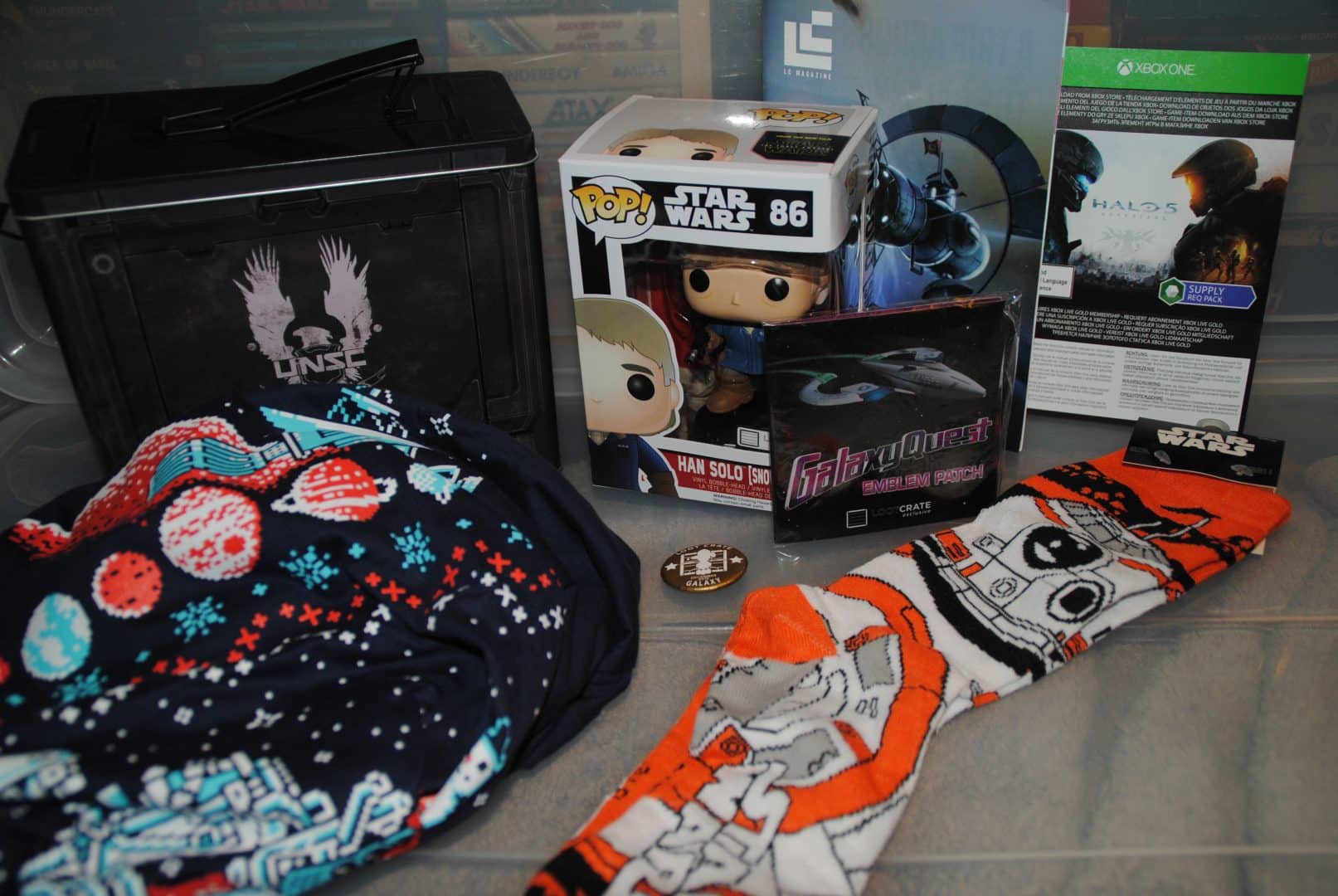 So that’s it, again one cool box and so far the one i like the most. Socks and T-Shirt certainly made me happy and i am keen to see if i get more of these boxes sent in the future. I have still no idea where and whom they come from and i have to thank the person/company who decided to support my site with more stuff.

I have decided that i will start various compos where i will reward some of the participants with merchandise, that is if this things (various gifts from Sony, Nintendo etc)will pop up more in the future.

Thanks for your time and hope to see you soon.