Aaero is one of those games that have been staring at me for ages on the PlayStation Store, it’s one of those titles that ticks every box in the book. Yet, still, no one talks about it and i have yet to see anyone play it.

The Summer sale opened up another possibility to look at this game now and due to its low price i decided to finally get it. 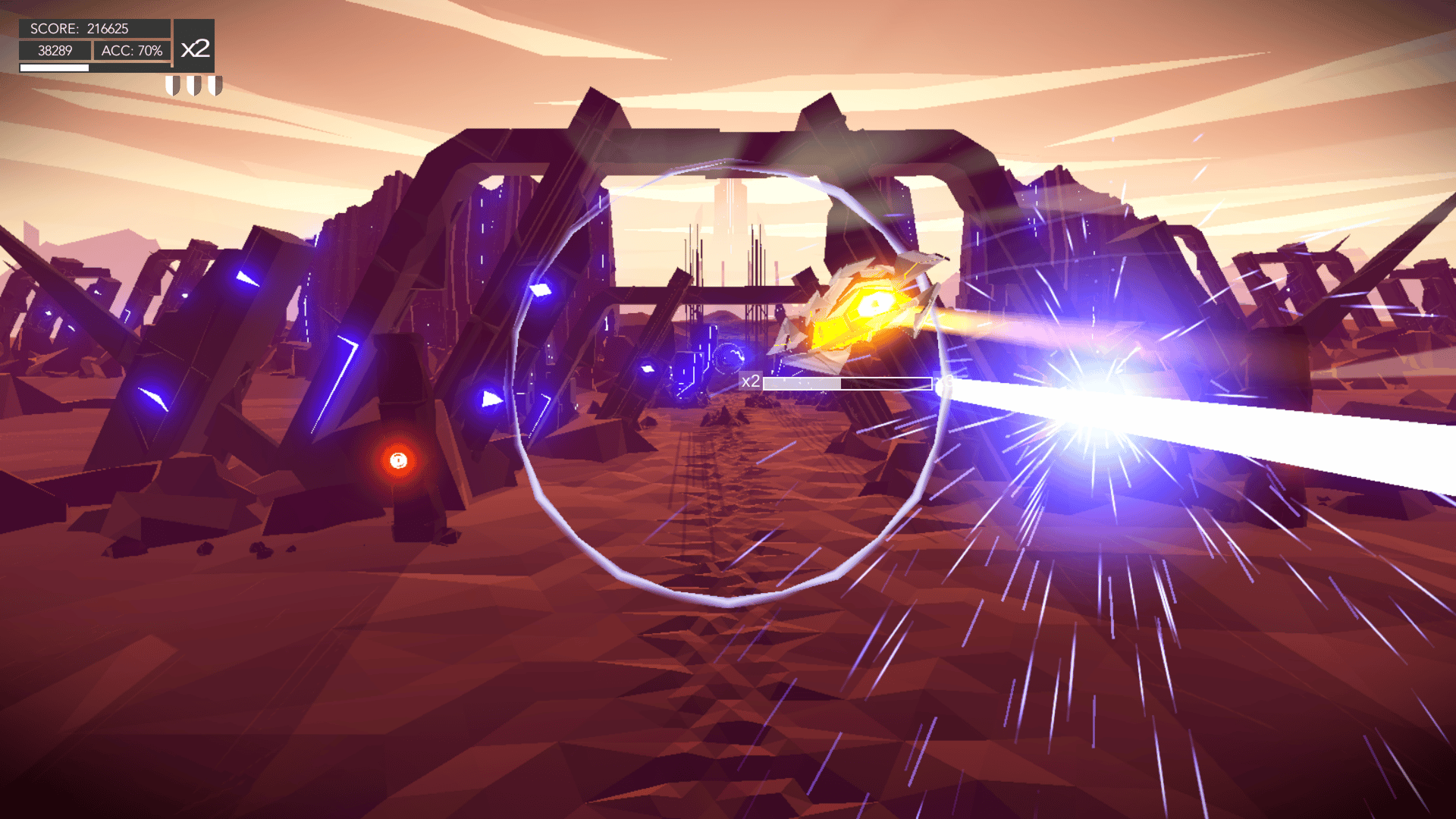 Aaero is yet another music-driven rail shooter shoot em up game right? well no it’s not just that but it’s clear where they took the inspiration from indeed although while it may feel like a REZ, Thumper,  Amplitude or whatever type of clone it still adds more than enough to keep the game fresh and good.

The first impression from the trailer was very hard to get out of the way, the trailer screams awesomeness and at the same time, it said very little about the gameplay in order to protect itself from bad sales most likely.  – Trailer below.

Gameplay wise it is all about shooting down enemies and dodge stuff on screen, but the game is driven by riding on a line which is actually the music stream and one of the requirements to complete the level/scoring system.

Easy right? wrong, which brings me to the only problem with the game  – the controls. Everything is mapped out logical but it simply doesn’t work like it should due to the analogue sticks code feeling “off” leading both steering (Left Analog Stick) and aiming (Right Analog Stick) to feel too loose and broken. 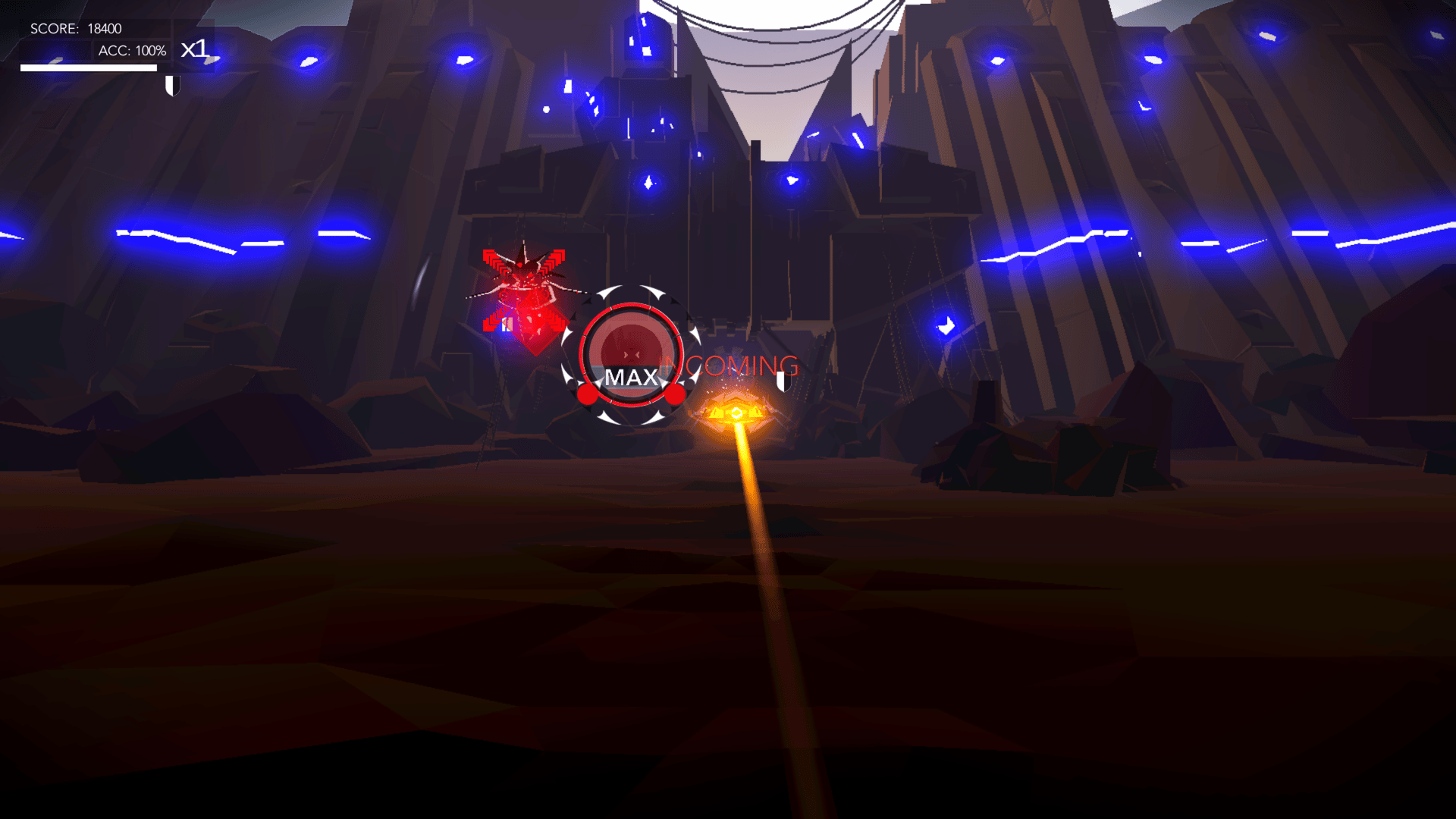 The problem with the controls is that it gives no feedback, for instance when you got an enemy on screen and it shoots out heat-seeking missiles at you, they are hard to see and due to the thumping track and fantastic graphics everywhere means that you most likely won’t notice the rockets before it’s too late.

In order to take out that rocket cluster requires you to move your crosshair with your Right Analog-stick over the rockets (and enemies) and hit R2 to fire your missiles, all this at the same time as you’re moving the ship with the Left Analog-stick.

It sounds a lot like REZ right?, yes it does indeed although in REZ you get player feedback with sounds and graphics that tell you that you managed to tag the enemies and what not, this system doesn’t work all that good in Aaero sadly.

As the player of the game, i want to get clear signals if i managed to mark them or not and with the controls being too loose even more so, everything feels like if it is just a video playing in the back and that the foreground was added afterwards.

The game that reminds me the most of this problem is actually Microcosm from Psygnosis on the Amiga CD32.

Over to the fantastic part about the game then, the graphics and music.

The game is divided up in 2 types of gameplay sections, inside tunnels and outside in open landscape.

Aaero certainly looks incredible, the style of the game is very special and it feels very fresh together with a very dreamy type of look, the tunnels, for instance, manages to stay fresh throughout the game and the open sections never stop to amaze me. 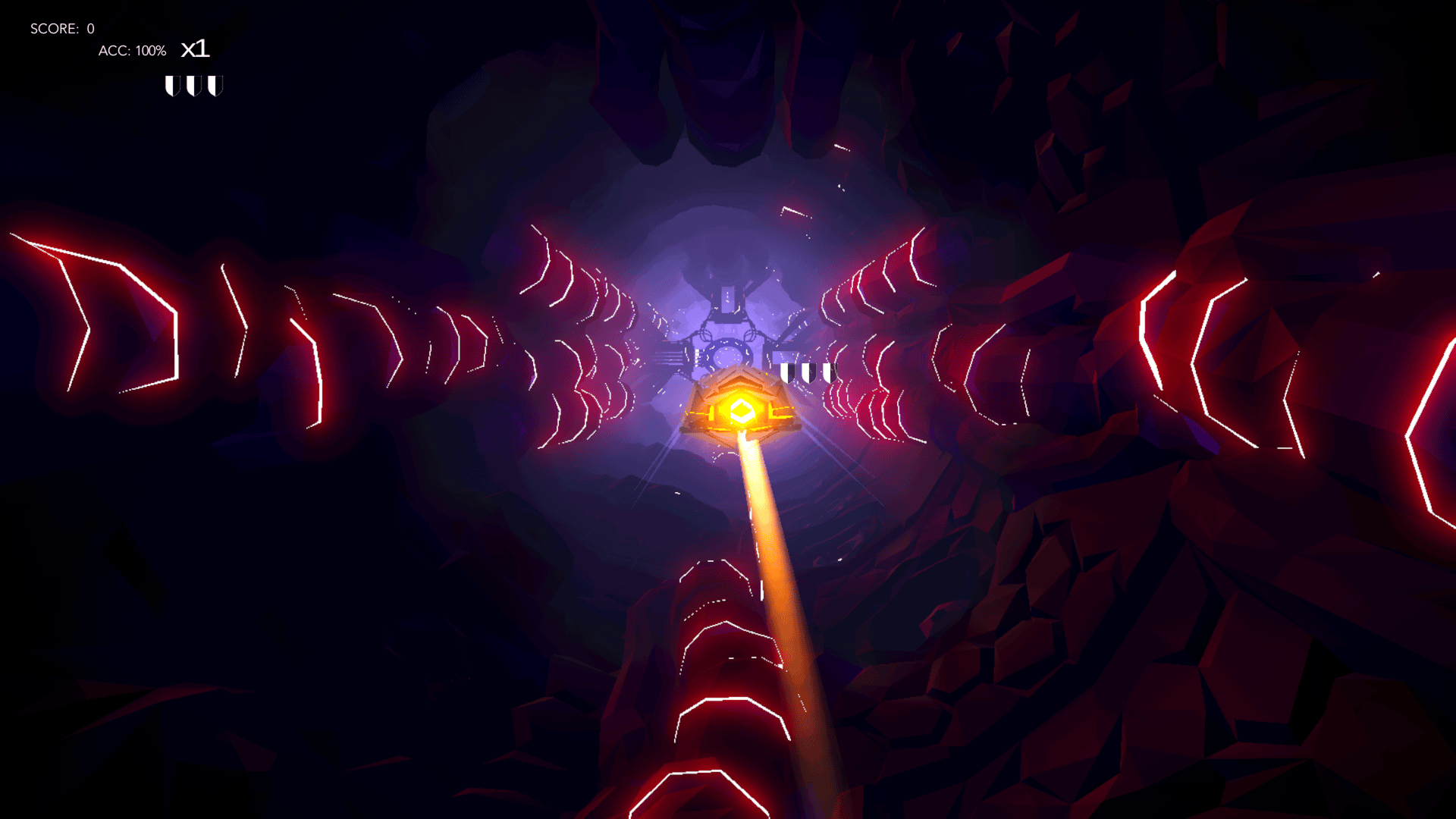 Some games are hard to do proper screenshots of, Aaero is one of them due to its speed and gameplay mechanics.

The gameplay mechanics are mostly about following lines with your ship to create music and this is often while the screen is rotating one way and several other things happening at the same time like collapsing tunnel walls or stuff you need to dodge or shoot. 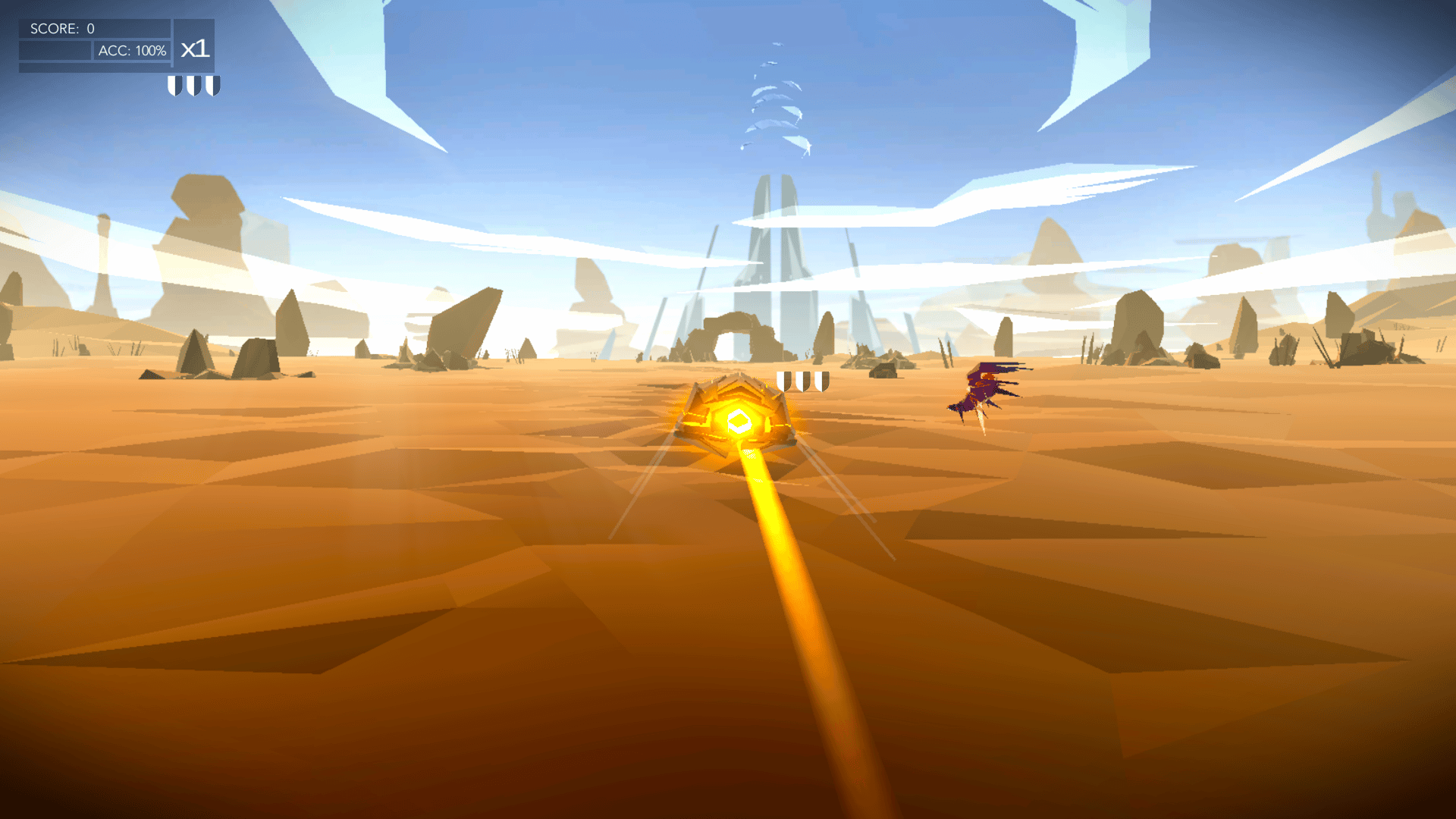 The graphic is very clean and the high frame rate (60?) makes this a proper eye pleaser and while the game got both dark and light styles it still manages to make it feel like everything is a perfect match. 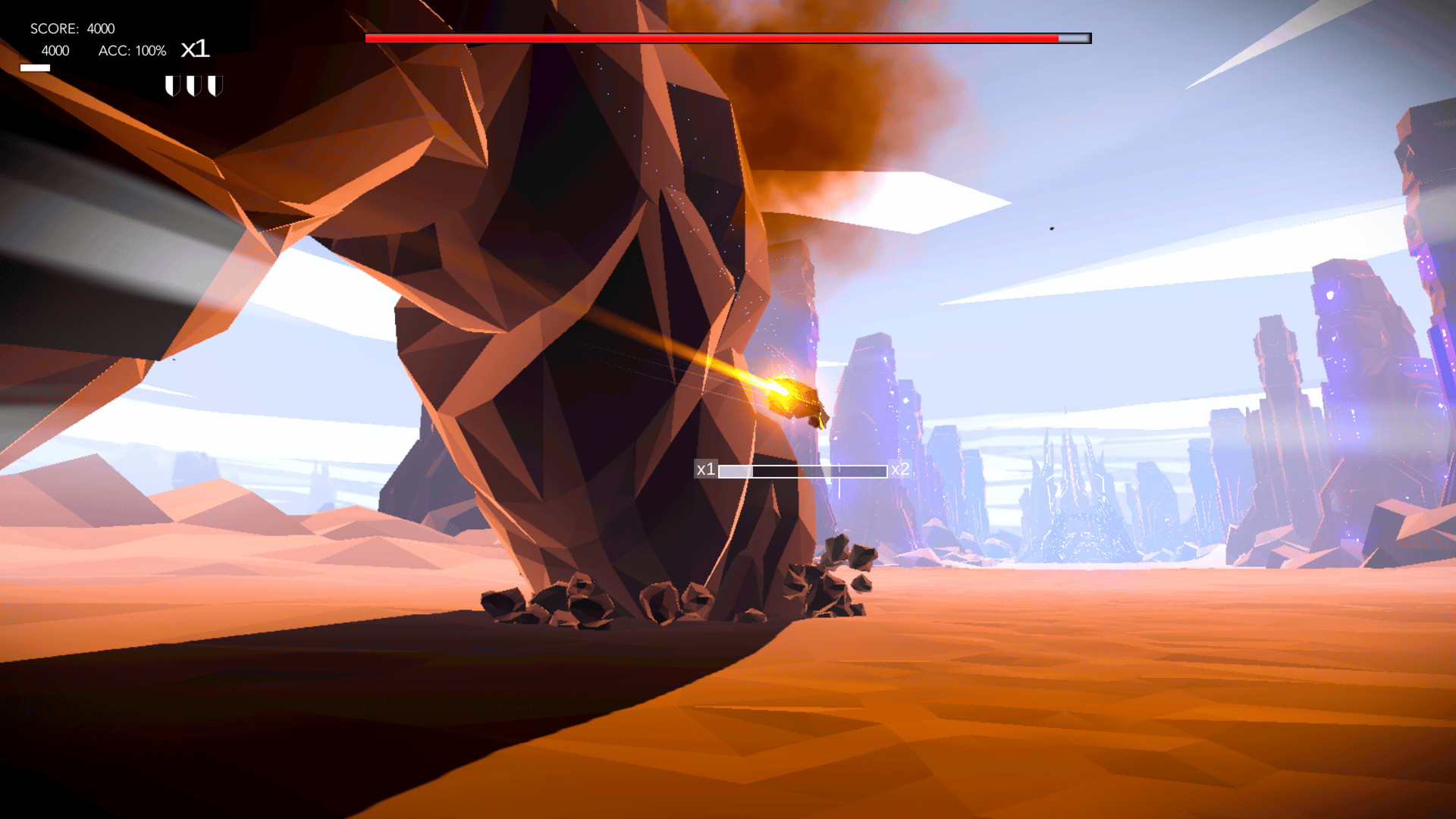 The first boss fight you get to in the game is a sandworm thingy al’a the one from DUNE, and it was in this section that i realized that this felt like a VR game and that this is maybe the closest one could get to how it feels like playing a game in VR.

It’s very clear to me now that this game should get an VR update and with that they could even patch the controls to use head tracking for aiming or what not, i have decided to let the developer MadFellowGames know about this for sure. 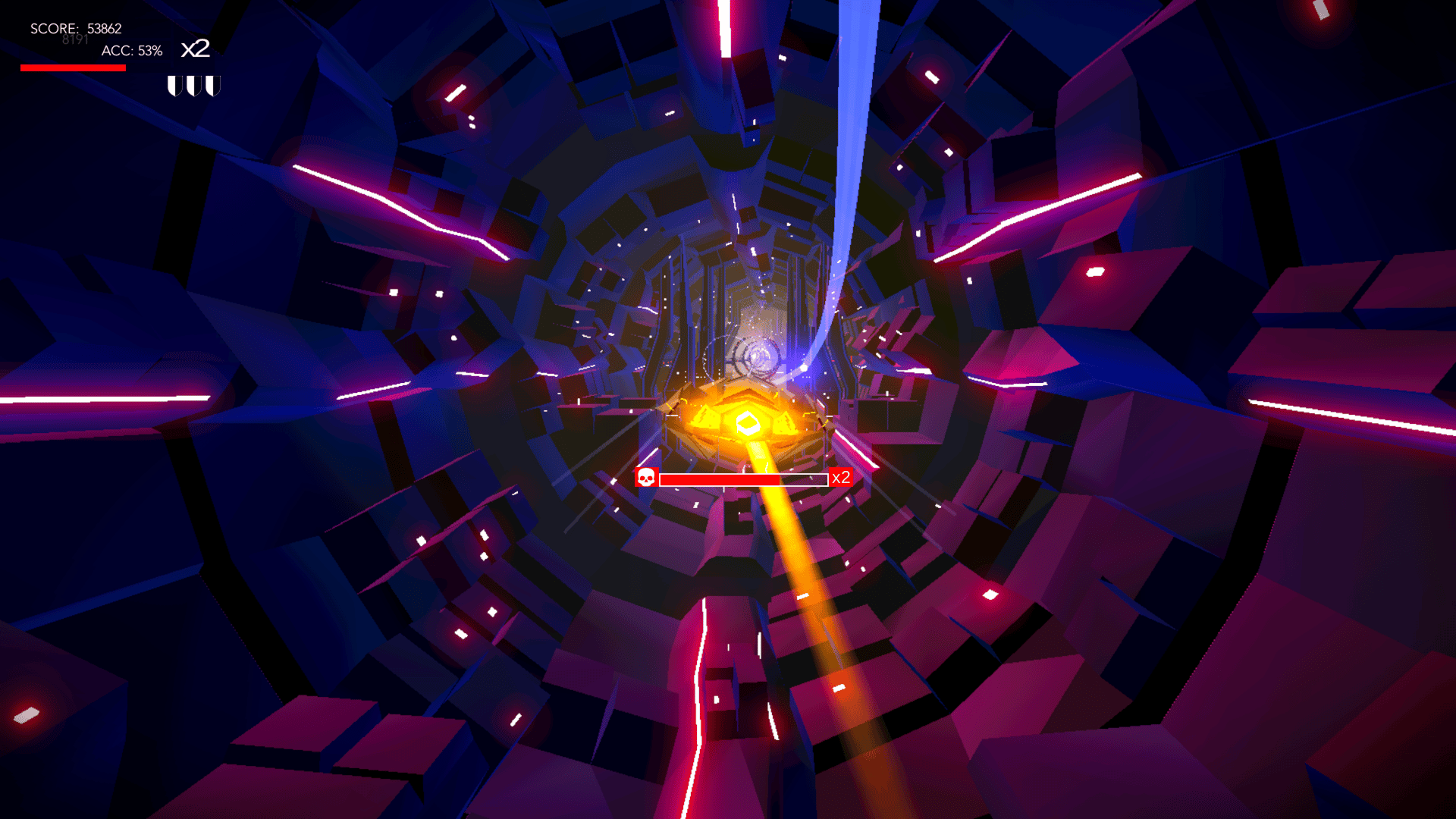 Stay on the music line to get the music playing and the multiplier going up to gain a good score, the higher the score the better the level rank (1 to 5 stars).

See that blue line ?, well, it is actually white(?) but this is where you should place your ship and this is why my multiplier line underneath my ship is red (and going down).

Now imagine the super fast graphics, the lovely design and those colours!. 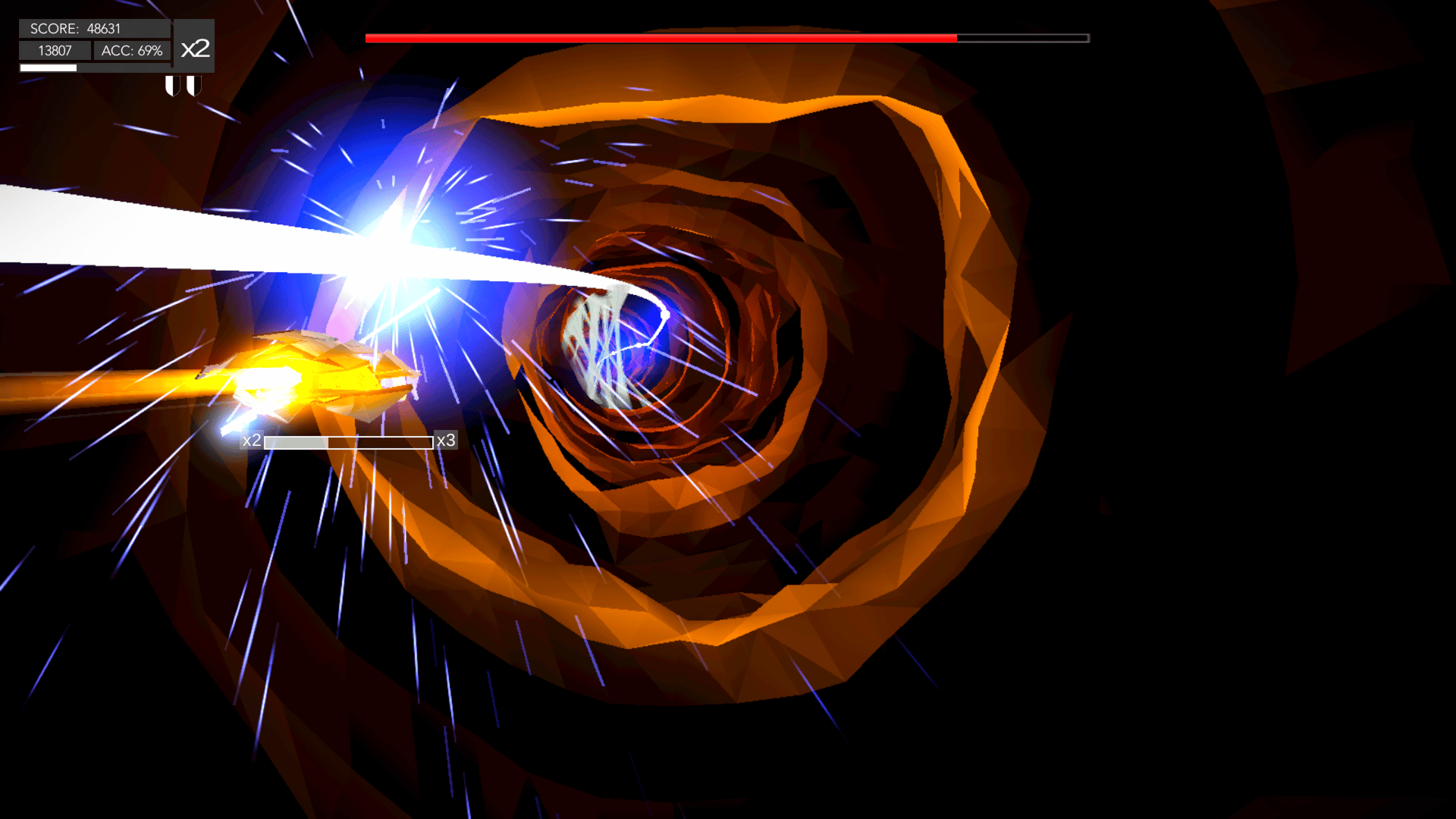 This is actually inside the first boss, great idea and awesome design choices all over the place but it is also damned hard and frustrating at times. 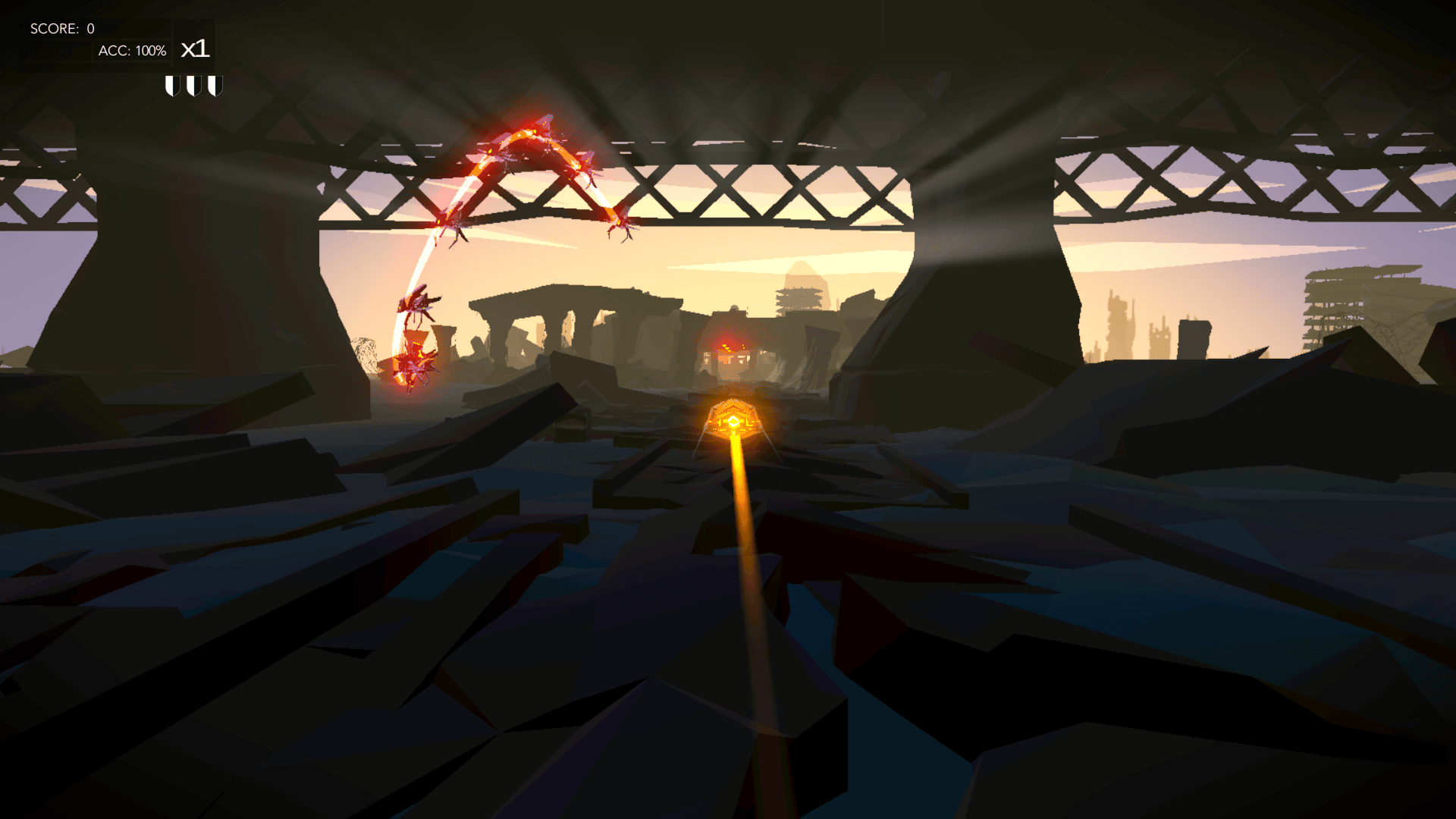 This is one of the darker levels, a proper industrial look and it works remarkably good too.

One thing is constant with Aaero and that is the artistic vision of it, i have not completed the 2 last levels yet but i think i can say with ease that there’s a picture opportunity in every level of the game, and with that i mean a picture i could print out and put on the wall. 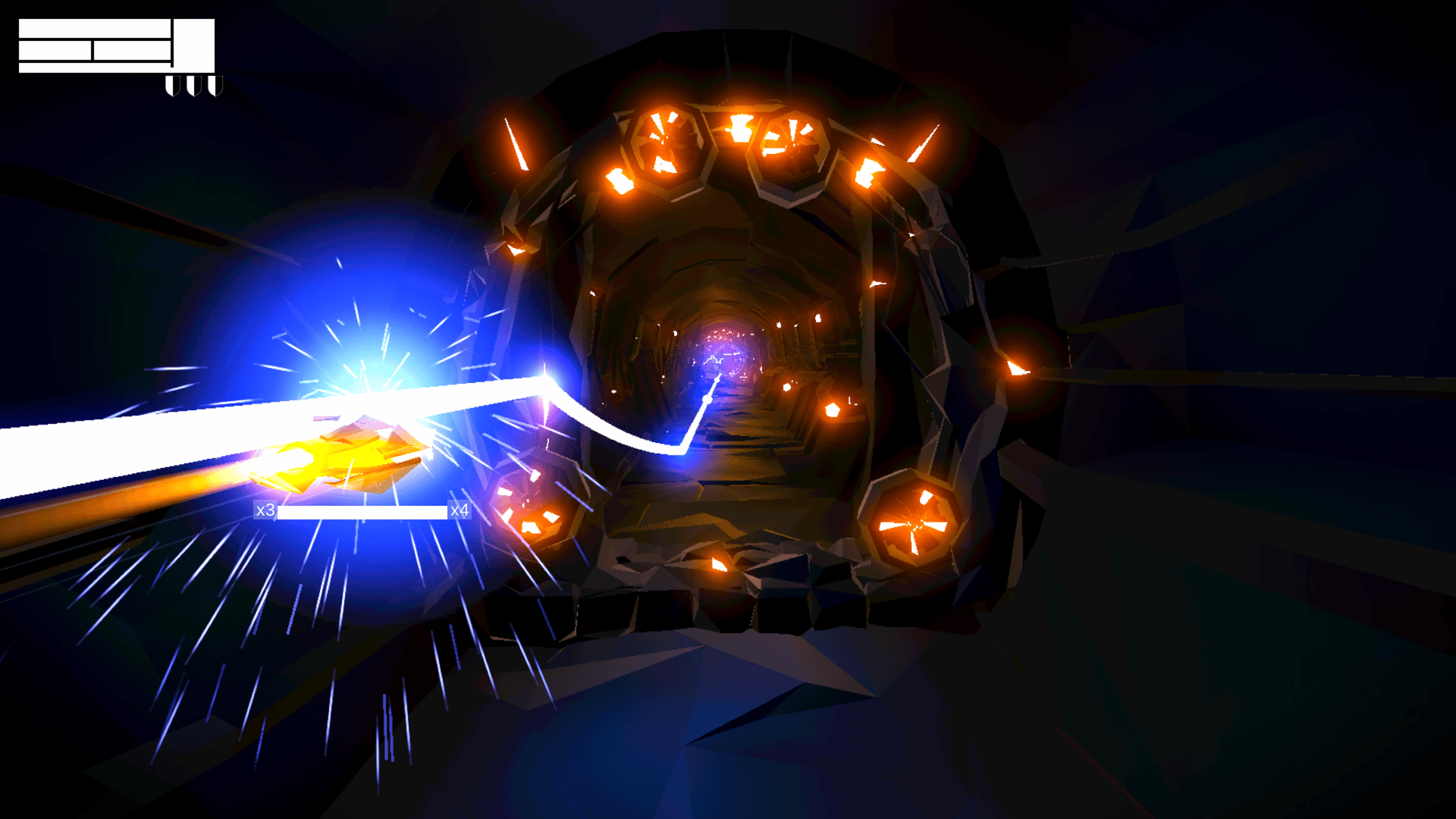 The darker styled tunnels are also incredible, there’s something about the colour usage in them that just screams “hope” to me, oh and yes the silky smooth transitions and excellent use of shades completes it all with such a finesse not often found in games these days.

How to make something dark without making it gritty and unclear for sure, there are a few other games out there with a similar approach and by now i guess you know which ones that would be? 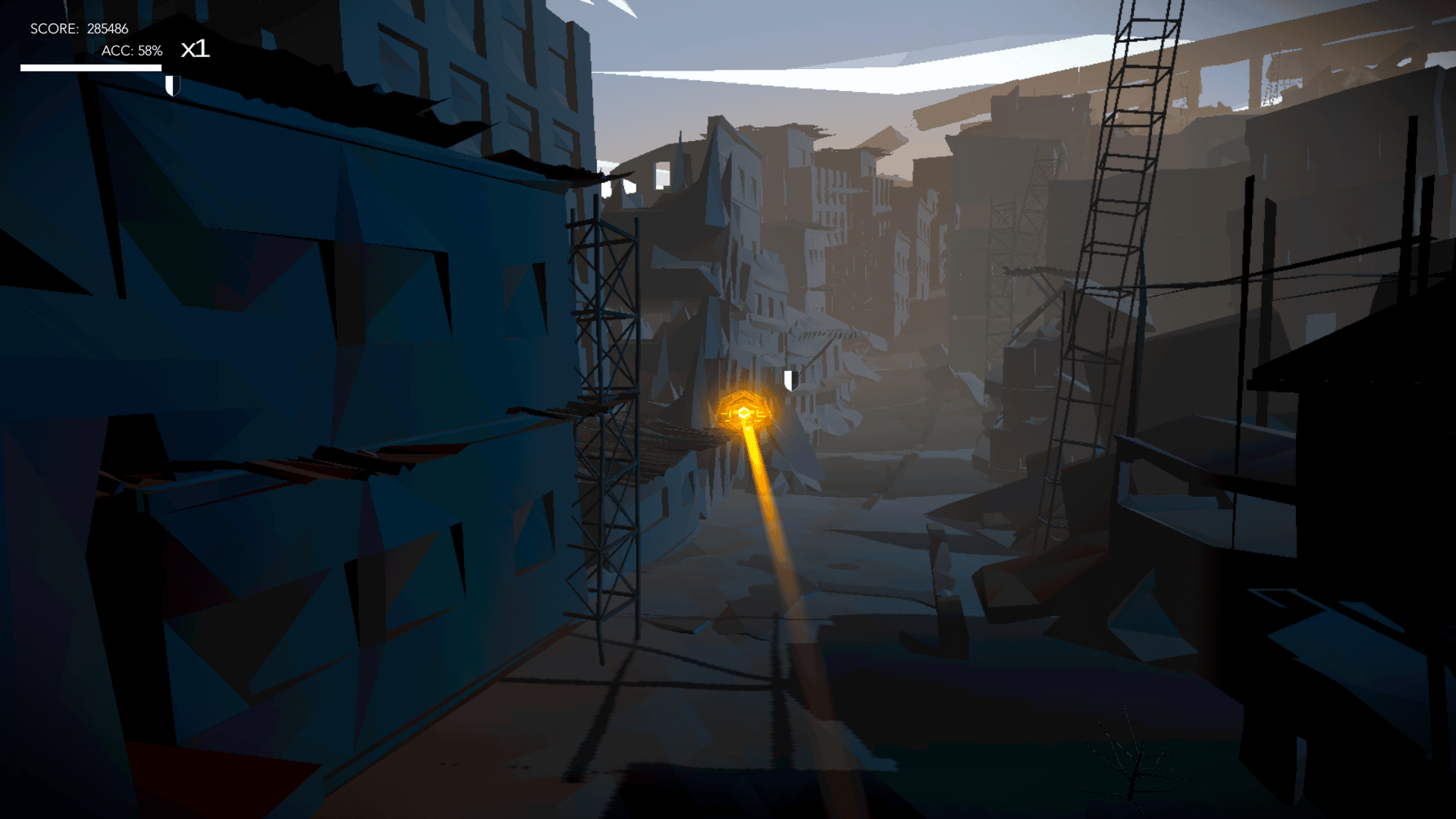 No? , well, what if i mention Rime or Journey?

Naturally, those games play more on emotions and storytelling and are in a totally different league of gaming than Aaero, but the graphical style is similar in many ways. 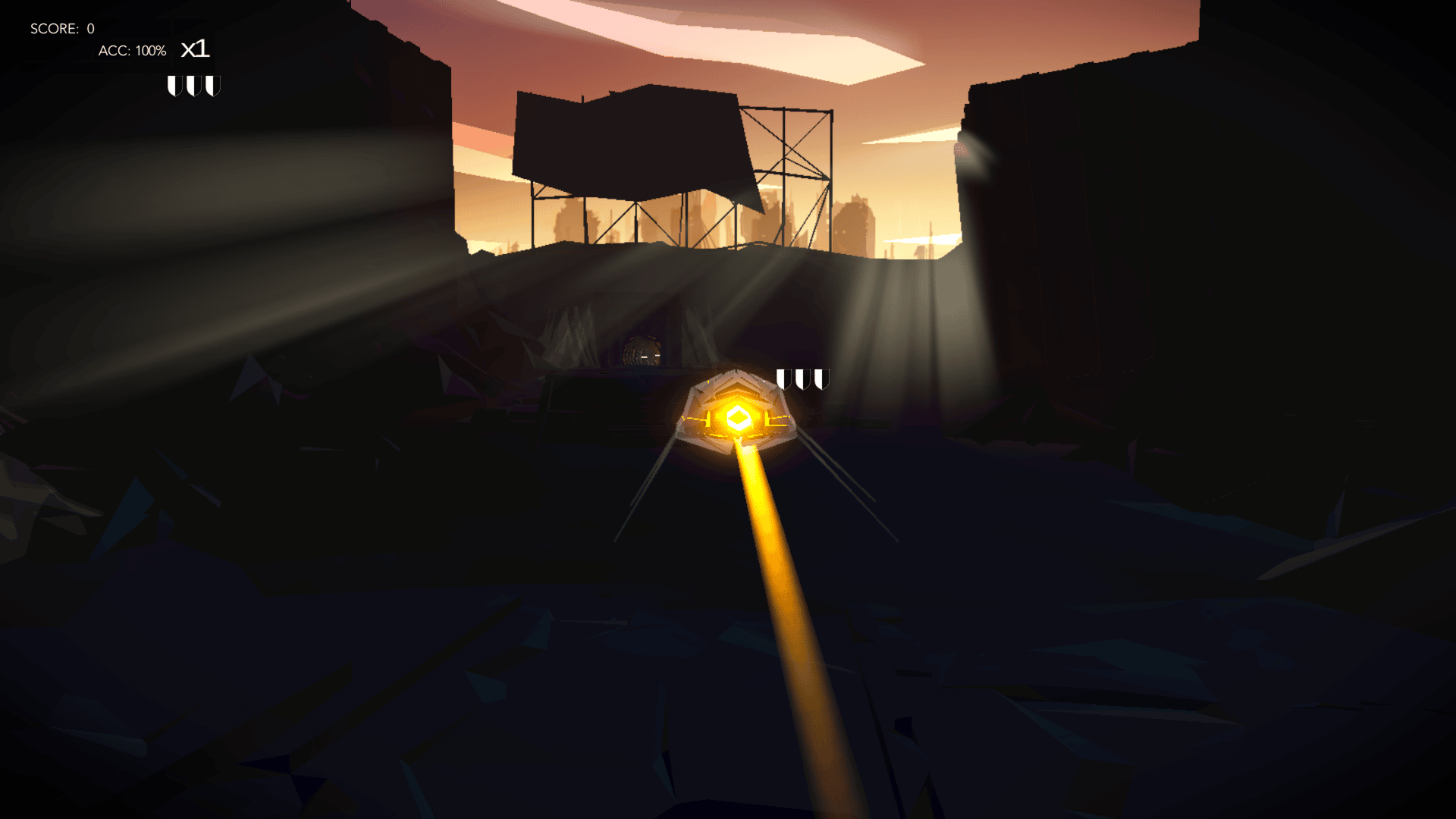 Aaero reviews out there indicate that it might be a bit too short and that people have completed it in one sitting, well the first bit of the game goes quick indeed but i have been struggling in the later levels so i found it ok for now, and the replay value lies in the high score tables and ranking scores for sure. 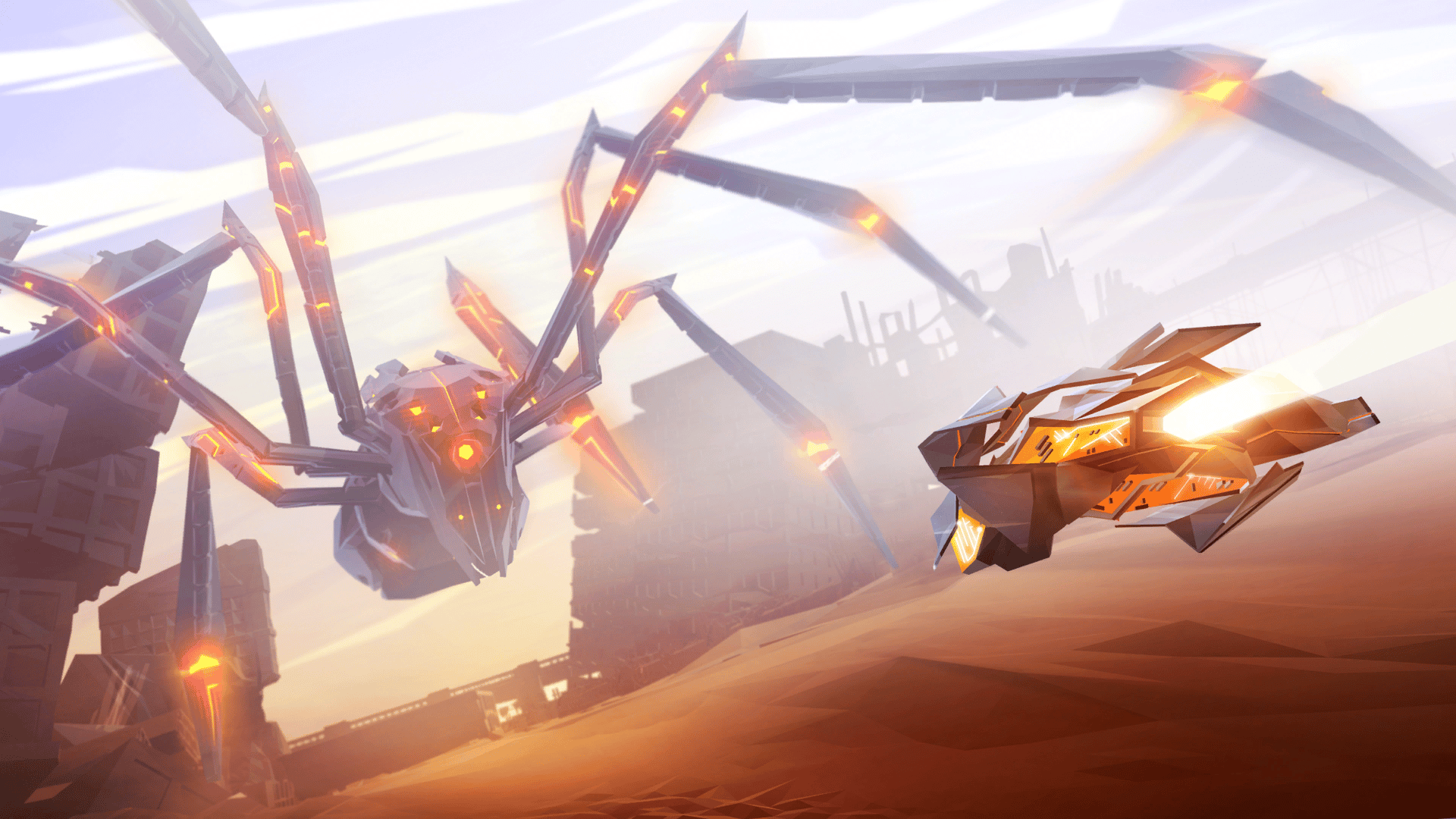 So, this is Aaero indeed, a techno music drove twin-stick audio-visual shooter extravaganza al’a REZ with a very special art style that could have made it to the top of the ranks had it been a bit more controller friendly. A few adjustments and tweaks here and this could have turned into a really memorable game/experience.

Do you like REZ or anything in the same style then this game is for you and one you need to grab right away before the sale is over.

If Aaero would have been better in VR is naturally hard to prove as it all lies in the implementation but based on what i have seen of the game and how well other similar games work in VR screams for an update of this one.