As a third title in the RetroMagazine series I’m here to introduce you a 2019 Commodore 64 game, made by the Italian coder Leonardo Vettori and originally reviewed on the magazine by Francesco Fiorentini. Once again, thanks to the now established partnership, I am pleased to provide you an insight into the game as it originally appeared on the e-zine a couple of months ago. 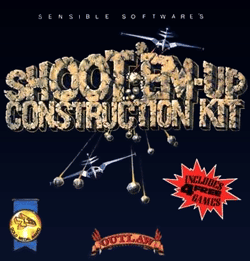 Nucleo 447 is a vertical scrolling shoot-em-up developed with the mythical S.E.U.C.K., the Shoot Em Up Construction Kit created in 1987 by Sensible Software for the C64, the Amiga and the Atari ST platforms. A thorough review of this framework is out of the scope of this article but just let me say that it was an integrated development environment that allowed for fairly easy creation of games even by a non-expert (even though, back then, we all kinda were…). Also, please let it be known that the present software was developed for the 2019 SEUCK Compo event, as you can notice from the picture embedded in the features image. Nucleo 447 is set in deep space and it sees our hero traveling across different alien-infested landscapes on a laser-guns-equipped starship. The purpose of the game, besides surviving (LOL!) is getting to the final stage to unveil the secret hidden behind the alien mind who controls the Universe. The game sports four full-fledged parallax-scrolling levels, each of them having a different and peculiar set up. And so we will travel across an icy planet, a green and forested one, a rocky planet and … a fourth one that I will not reveal to avoid spoiling the fun.

Graphics and setting are the positive notes of the game: the levels are laid out with passion and plenty of details; the tortuous paths, embedded in every level, require your full attention if you don’t want to end up in a dead-end or crash and die against an icy rock. One of the original limits of the SEUCK engine was the limited amount of memory available, and so many games of the era ended up being graphically poor (with dull or empty environments) or rather simple in nature since it was difficult to include a refined enemies AI. Leonardo avoided these problems with a clever layout of enemies and landscape features: fixed enemy posts have been scattered close to the mandatory paths to increase the game’s difficulty but, unlike other games out there, we are dealing with intelligent design and not with gratuitous sadism (Sekiro, anyone?).

As usual, every end of a level will put you against a boss, who actually represents the bad part of the game since such bosses, although well-conceived and well-drawn, are pretty easy to defeat, thus spoiling part of the fun. A higher difficulty level on those parts of the game would have probably given more justice to the entire affair. And what about the music and the special effects? Sadly, a missing soundtrack is another one of SEUCK games limitations and Nucleo 447 makes no difference here, while the sound FX are right on par. Playability, on the other hand, is a notable point: the game is fun and it lets you easily play it, stimulating the gamer to try again to improve his/her performances. The difficulty level, final bosses aside, is fine-tuned so the learning curve never gets so steep to frustrate the gamer to the point of abandoning the game.

Once you get the hang of it, though, the experience will soon be over and since the enemy logic doesn’t change the replayability level is pretty low. Longevity, therefore, is another weak point. Despite all of this, Leonardo did put all his heart in its creation and at shows. It’s easy to tell that the engine was really squeezed to the maximum to reach peak performances so the final verdict cannot be a negative one. Leonardo might easily be one of the last bedroom coders, but were this product be out years ago it could have easily competed with most budget titles we used to play in the ’80s. The game (both in disk and tape format) can be downloaded HERE for free. Enjoy!