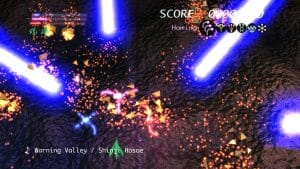 Having access to the Jap PSN store is really handy these days, loads of nice stuff there that is and most likely will stay exclusive to that region for years to come.

Prismatic Solid is one of those games, a Vertical shoot em up in the style of all those classics from the past, Raystorm, Raiden, Banshee and so on.

Today’s vertical shooters have one thing in common and that is the difficulty level, they seem too difficult at the normal settings but when you adjust it down to easy or whatever then it’s too easy. I guess i suck at these type of games now that i am getting older. I used to kick ass in these type of games (Salamander,1942,1943 and Banshee etc) back in the 80’s and 90’s. 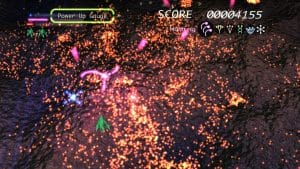 The first thing that struck me when i fired up Prismatic Solid was how ” old ” it felt, graphics were nice and all but it felt like something from the late 90’s albeit with a shitload of extra stuff. For today’s age all games like these feel ” Indie ” i guess but that doesn’t mean it’s bad, just check the video at the end of the article.

After a few seconds of research (Gasp!) i found out that this game was actually part of the Xbox live 2010 Indie crap channel or whatever what it was called, you know, the place where there was a lot of awesome games but due to the system and the amount of stuff it all turned into a huge pile of crap that made it hard to find a gem or 2 in there….

Prismatic Solid may look oldish but it works great and the design might feel flat but it works great together with everything else so the whole thing turns out pretty darn flawless and of course that framerate, 60fps, certainly doesn’t do it any harm.

I have not had many hours in this game yet, actually, i have only played it a few times so far as i have to finish up some other games first.

Check Video below to see more of the game.

2 thoughts on “Only In Japan – Prismatic Solid –”