I can safely say that 2013 was an amazing year in terms of PS3 quality games but it was also the first year for me where i found several crappy games and with crappy i mean really crappy/bad/trash or whatnot, simply so crap that one really have to ask if the developer really want such a title on their Résumé and WHAT THE HELL were they thinking releasing a product in such horrible state?
I will mention 5 boxed releases in this series but i have only tried 3 of them so far and right now i am afraid of even considering trying the two others.

First Title and maybe the most interesting of them all… RIDE TO HELL: Retribution 1%.
Ok, it took a while before i realized what the title meant but now i am confident in that it means nothing more than the 1% means the score it deserves and the Ride To Hell one means, yup you guessed it.. the experience of the game will be like a ride to hell.
You know, this game had potential to be something special, well not really anything more than an average game but at first glance, the game feels and looks like the PS2 game “Ghost Rider”, a title based on the Nicolas Cage movie. which i personally did not hate.
So Just like Ghost Rider this game is half Button Masher + QTE’s and rest of it you are riding a motorbike and that’s where the similarities end. 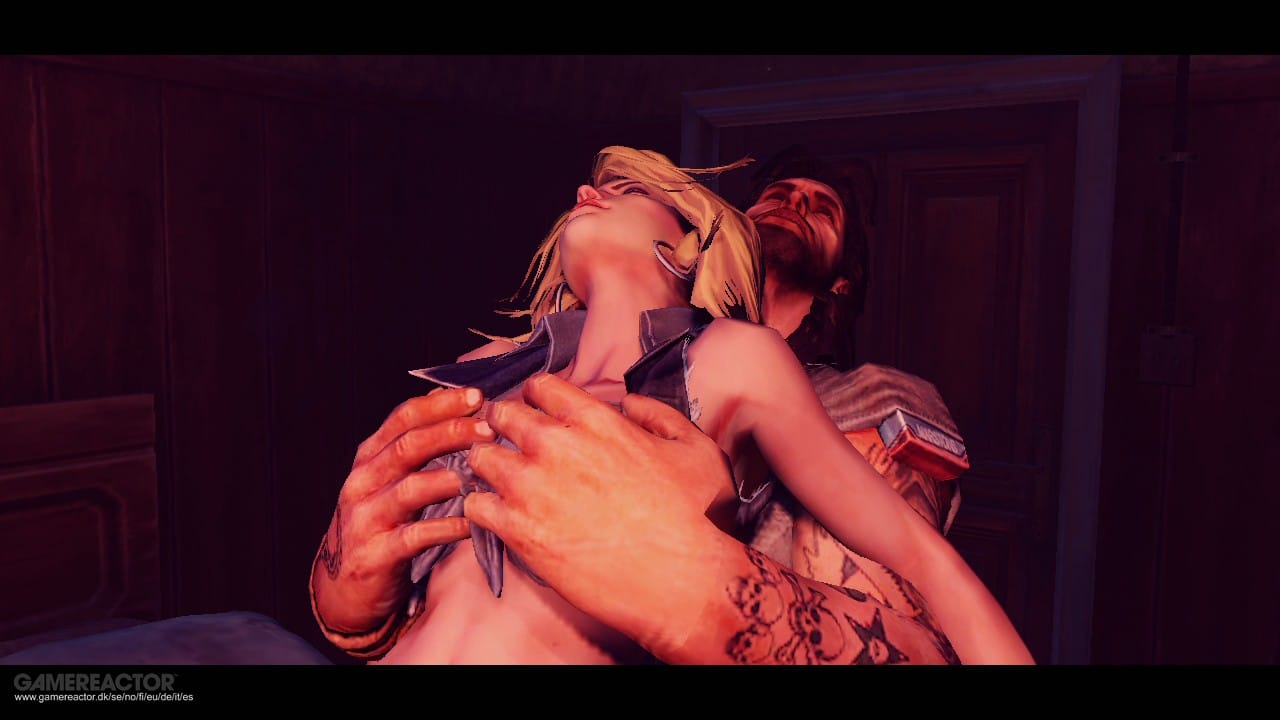 So they have a piece of crap game, how can you sell something this crappy?, it is not a licensed title either and no trademarks or whatever the public can relate to, yup they went for the SEX – DRUGS and OVER THE TOP KILLING solution, the game is littered with sexual references, the thugs you fight drops drugs for you to pick up everywhere which you, of course, will sell to a dealer… and then there is the fighting… Stabbing people with a knife in the back… screwdrivers… and so much more and of course littered with QTE’s so that the whole thing will be much more dramatic. 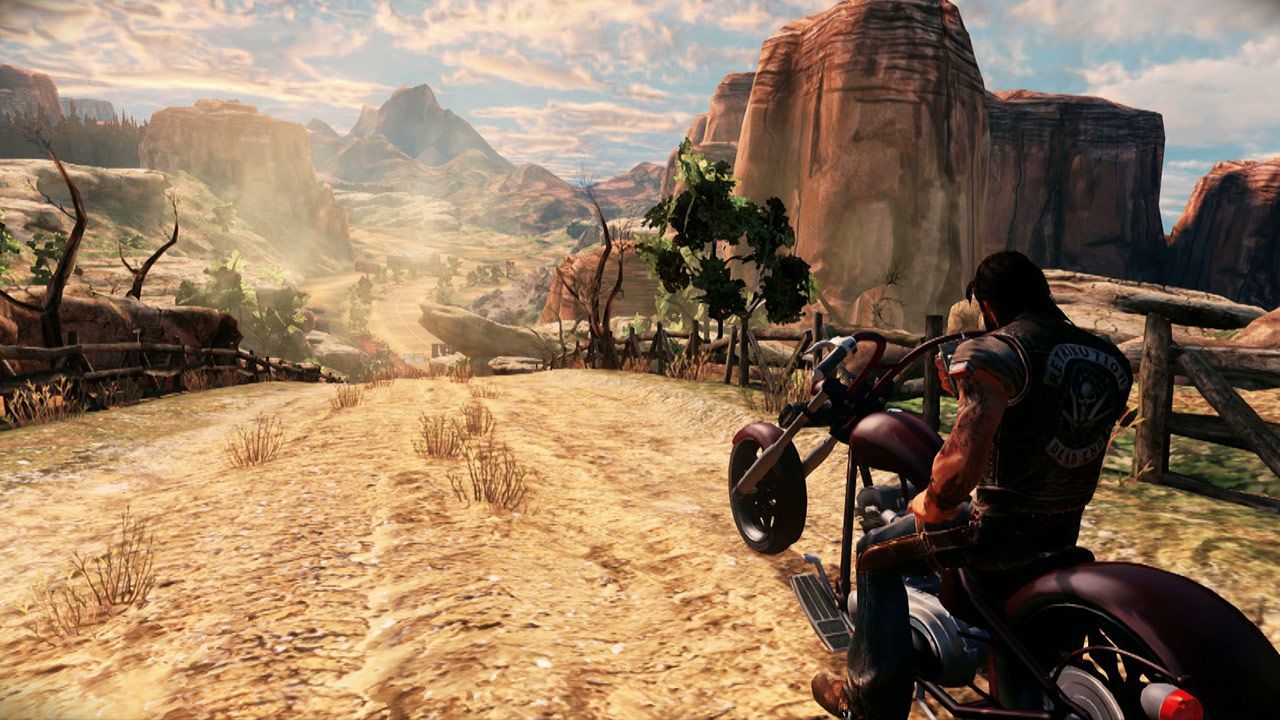 The picture above: it actually looks decent enough in still shots…. or does it?

You have various weapons in the game and the first thing you do in the game is mounting (umm..) a turret gun thingamabob, look at the caption.. aim accurately, i think
the developers tried their best with this line as the game is extremely laggy, choppy and the fps is absolutely hysterical as it can drop down to 1 FPS…. how the hell can one aim accurately?, sorry but i will have to use the F-word here… THE CONTROLS ARE LIKE HELL!. (hey i managed to stay away from the F-word… hell is sort of an F-word …so.. maybe it should be FELL? ..ugh…FUCK IT!. 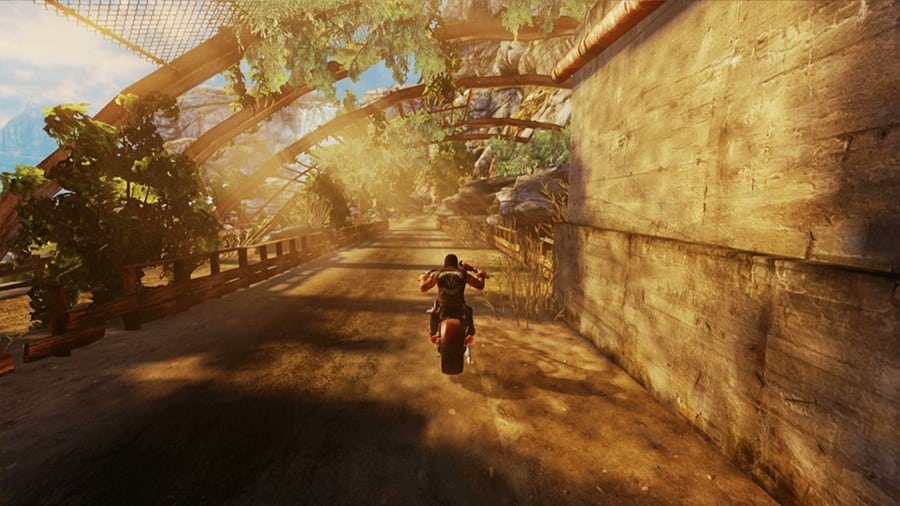 The picture above: looks awesome right? not when it moves!..well, when it moves the frame drop is so bad that it almost looks like a slideshow at times.

Ah, the driving sections, why does every motorbike more or less have to suck?, controls are all over the place, tracks are hilariously badly designed (if one can even call it that…) and it is impossible to see what you should do before you have crashed…. there’s also supposed to be some stuff to pick up here and yes i have got a few of them “playing cards” but they’re impossible to see until you actually picked them up…or that is how it feels.. In other words…. the biking stuff simply sucks!.

Picture above: the button masher part works pretty well but popups in the graphics and missing sound tarnish the whole “game” and it just ends up looking like a total stinker, seriously some of the textures can take 30 seconds just to pop up… and a later level in a boss battle next to an airplane, it played ok enough but when i was done killing everyone and was supposed to move up and kill the boss, 20+ enemies popped up in front of me and one of 3 actually popped up on me in such a way that i was stuck and could not move around so the only thing i could do was…getting beat to death and restart the level.

So , look at that picture… if you’re an old gamer like me then the first thing you should think of is “ROAD RASH”, you know , the EA game series from the 16 bit and PS1 game period, a game series we have been praying to get a remake/reboot of since the late 90’s, seriously i just had to get the game because of these shots and while i knew the game was an utter disgrace i am still determined that i will complete the game.

And now for the most surprising thing…

This game was not created by n00bs, this is a developer from the 80’s, they’ve made a gazillion games by now and while many of them were “budget” Amiga/C64 and such titles but eventually they went on to make a few really solid games…
i don’t know about you guys but i did play a lot of Arnie 1 and 2 back in the day
They used to be called Zeppelin Games and they created games like Arnie 1 and 2 and a bunch of other budgets release titles, eventually, they changed the name to Merit Software and then when the PS1 game they named themselves Eutechnyx and that’s the name they still go under with…

Trivia:
The funniest thing is that they REMOVED all pictures and info about this Ride To Hell: Retribution game from their website and yes i understand why but there is more to it than meets the eye, the game has been slated by the media and got the award – one of the worst games ever made! , rude? dunno, i have seen worse but opinions… yep.


Follow Us... Inspire Us To Get Better... Keep The Flame Alive
Tags: Amiga, Eutechnyx, ride to hell, RideToHell, stinkers, zeppelin