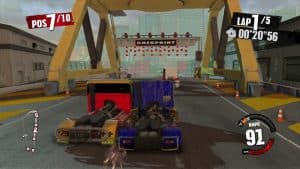 Truck Racer is one of those games that i just happen to buy without hesitation, i mean it’s because it’s something different as in that i have no other games like it on the PS3 but yes most of these “blind jumps” tend to be games i will never play more than 2-3 times as they’re shovelware Deluxe 3 SUPER TURBO NITRO NOS MEGA GIGA AMAZING WORLD crap.

So the real question is… is the game shovelware and just useless data taken on my hard drive? well, it certainly ain’t an amazing game. I will try and explain more right away, the game is developed by Kylotonn and published by BigBen, Kylotonn from Hunters Trophy series and BigBen from WRC 3-4 fame so all in all it could be a semi-good title just because of that… 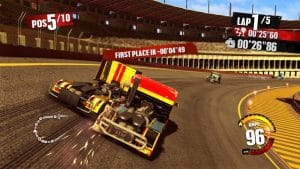 Graphics are good enough, nothing too fancy and it does the job just fine, framerate is steady too, the sound is brutal just like trucks sounds should be!.

I have done a very nice Video Recording myself which shows everything better than explaining it here.

Truck Racer was my first proper Vblog , i wanted to publish all of it here but my programs on the Amiga for these things…well .. are quite outdated and to be honest , far from today’s workhorses software (1 encoding with multiple sound layers took 6 hours to “join”) which means that i will have to tweak more and learn more without doing the Video blog for now and just stick to Unique footage like i have shown above.

Added an “illegal” jingle too, yes it is supposed to make your eyes pop.

The video shows me using a medium upgraded vehicle, i have upgraded some spoilers and such and i also upgraded the engine to max level but with everything else pretty much at standard settings, the truck is handling like a bitch but i somehow managed to do 2 races in 1 go without a crash and burn…as in… 1st place, just in front of the finish line… crash a little and then 9 other racers pass so i get 10th place in a matter of seconds. 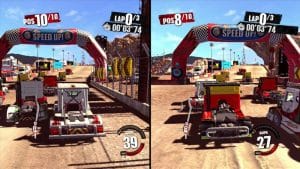 Just as described above..this game can be fun until you do a small crash as then everyone will pass you and you might as well just restart the game…that is… unless you upgrade your truck heavily and then you might have a chance to get to the first place again.

Truck Racer is far from a game better than Average, the drifting doesn’t really work, turns are not optimal designed, there is no cockpit view but there is a bumper view, it is a typical trophy hunter game i suspect as in a few hours gameplay i have reached 47% without even trying to get one of them, i suspect the game was too easy at first so they decided to make the controls a bit stiffer to make the game last more than just a few hours..

I seem to like average games, i am not saying i am loving this one but i find it fresh and fun for a few goes between Defiance and WRC4 and i rather play this than some AAA games out there, yes i know.. I AM CRAZY!

what else is new?

PS: let me know what you think of the video.