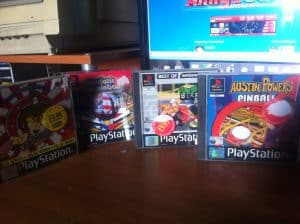 Finding games with retro games is always fun but over here it can be a real hard job to find shops with pre PS2 games so it was really cool to find one in Sweden where they had just about every format out there….except for Commodore-based machines (AAARGH!) but i did find lots of Saturn, Dreamcast, Megadrive, Snes etc but sadly i had most of the ones i wanted and the rest was overpriced…way overpriced…
I found a few interesting PSone titles though, always funny to find games that were released after the PS2 came out by then most major titles had gone away and all of my friends and so on never used their console anymore so they didn’t bother getting new games either.
I found lots of games i should have bought really but the prices made me quite annoyed and i just ignored the games… but i should have bought them!… more about that soon.

Ok so these was the only games that i bought… 4… they had hundreds..and i bought 4, why? well..the prices!, they had pricing as high as 10 Euro a piece and when i had to go (family was waiting outside) i just brought the games i had in my hands and went to the cashier. According to the pricing i would have had to pay 30 euro and i was about to comment it until the cashier said, the pricing is off, sorry.. they are 0.99 euro a piece, the total was 3,50 euro (one was cheaper)… i went..what? are all games priced like this?, the guy said, only two PSone shelves and he pointed at the 2 largest rows (probably 150 titles?) but the third one the games start at 20 euro a piece…
Then i just replied.. ok, damn!. i wish i had more time!.. he just said, visit us another time then, we ain’t going anywhere lol..

Sure there were no real gems there…or maybe there was but in the cheap sections there was most common games, games that go cheap most places(eBay etc) but not 0.99euro though, i will return there soon i hope…. shame it is a 13hour drive though.