Shadow Of The Colossus is a rather hard game for me to write about as this is, well, this game is actually in my top 3 games of all time list and yes they have already released the game 3 times and every single time it blew me away in ways no other game has ever done before.

I guess your reaction after reading that goes a bit like, uh? but if you’re such a huge fan then you would write endlessly and passionately about it, right?

Well, that is indeed true but it’s more that I want to write a proper article with some Amiga connections too and not just some review. 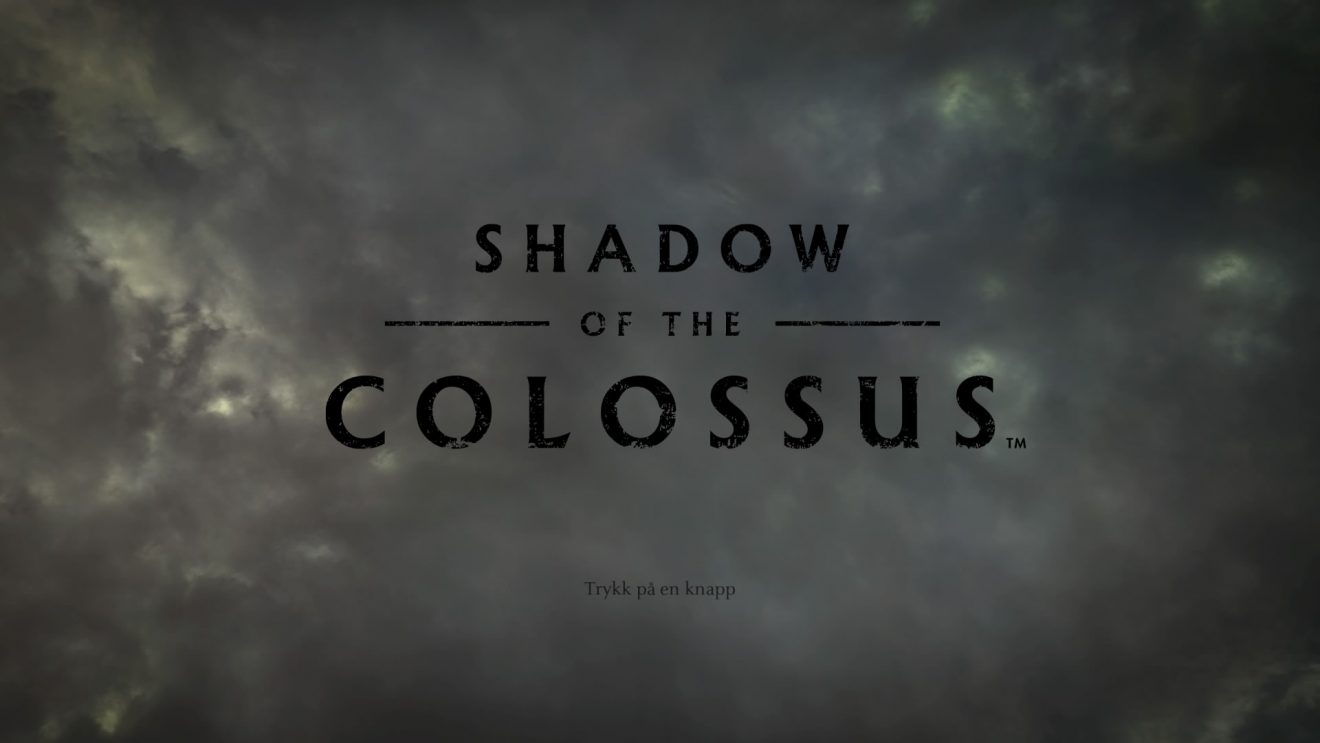 SOTC is one of those games one either love or hate according to various internet sites and this I can somewhat relate to as this is one of those games that is more of an art piece than a game and maybe most of all are that this game has to be played with all senses switched to on, everything in the is meant to be felt and not just watched.

If you don’t like the game then it is most likely down to one thing, you aren’t open to emotional games where you have to give some of yourself to be able to enjoy the game. 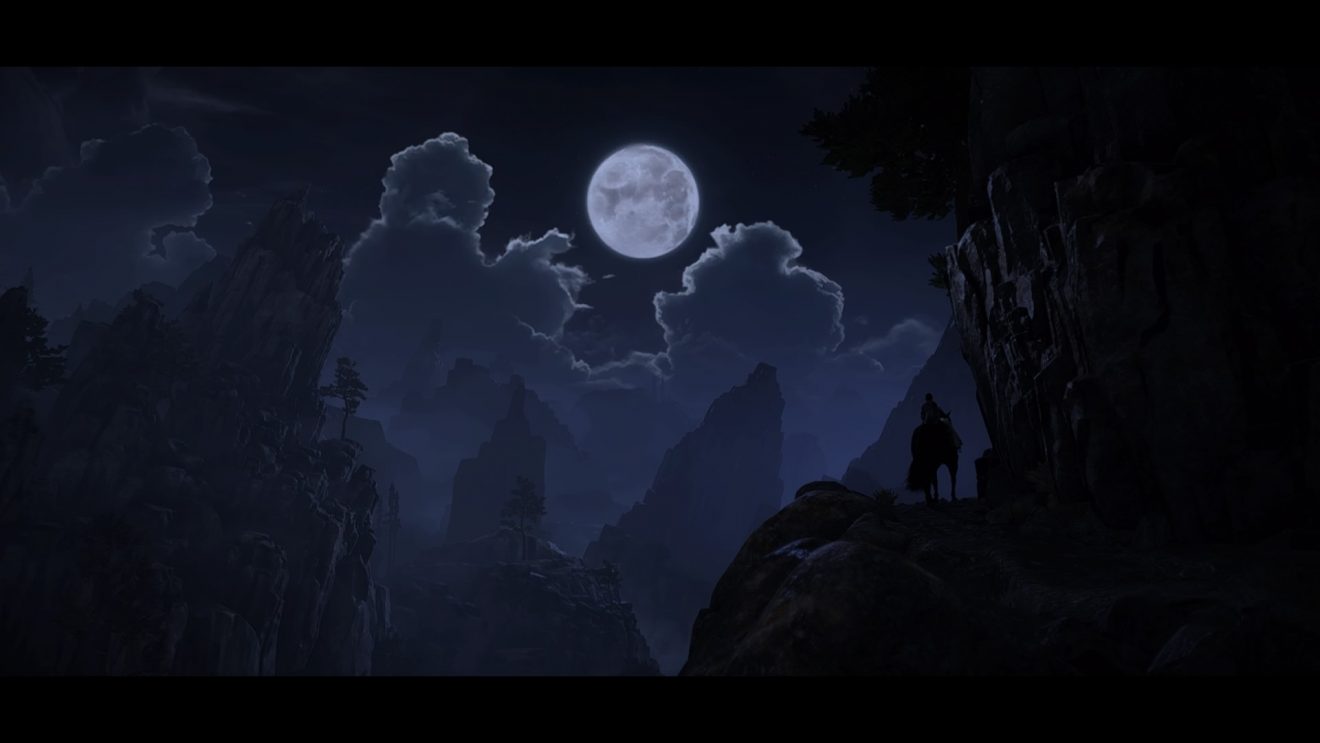 The thing with SOTC that strikes me the most is that everything in the game looks like it was taken from an art book or such, in the original PS2 version everything was far from as crisp looking like the PS4 version we are looking at here but it had something no other game before it had and while the framerate was awful at times and the controls certainly left you on the brink of a breakdown but you still ended up praising it and yes for me it was THE BEST GAME EVER MADE. 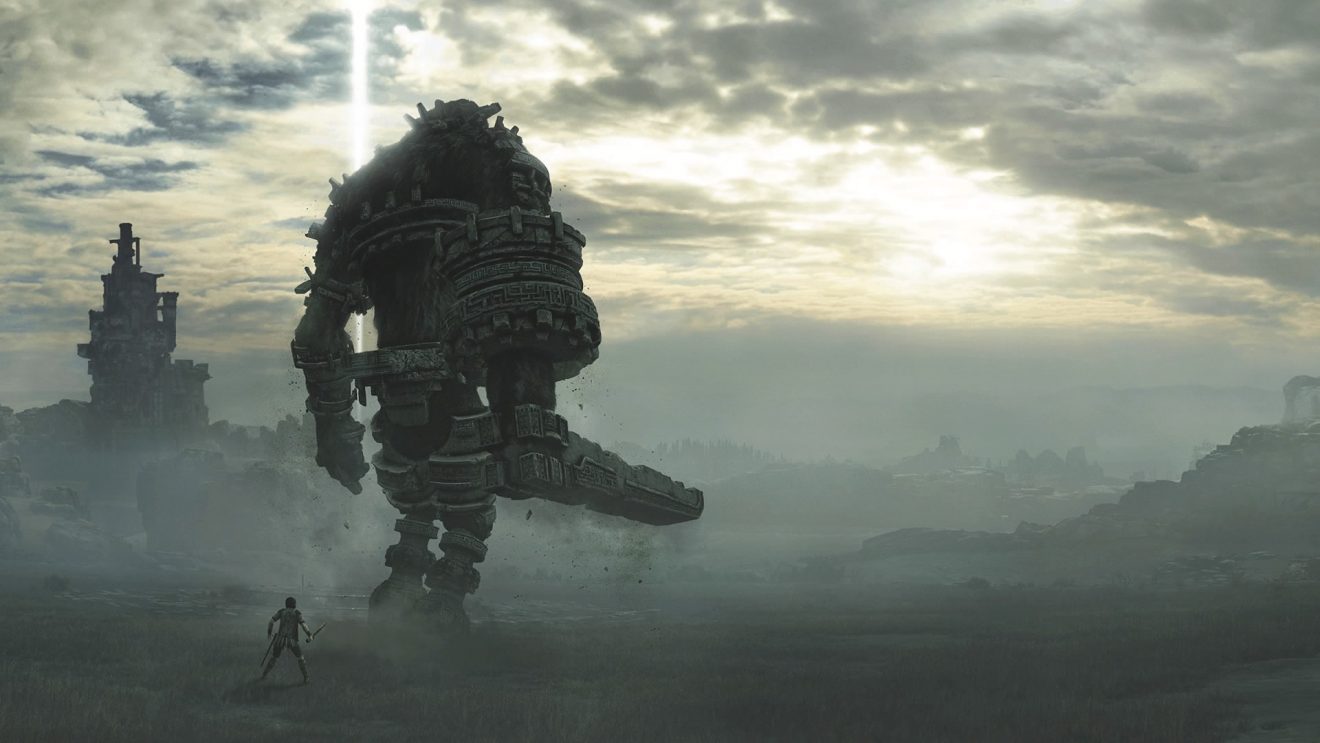 SOTC is nothing more than a huge map with 16 Colossuses scattered around it that you have to find and kill, there are vast landscapes with barely no life at all but it still feels so alive thanks to the wonderful setting but the emptiness will make you even more open to the feeling of being alone and scared. 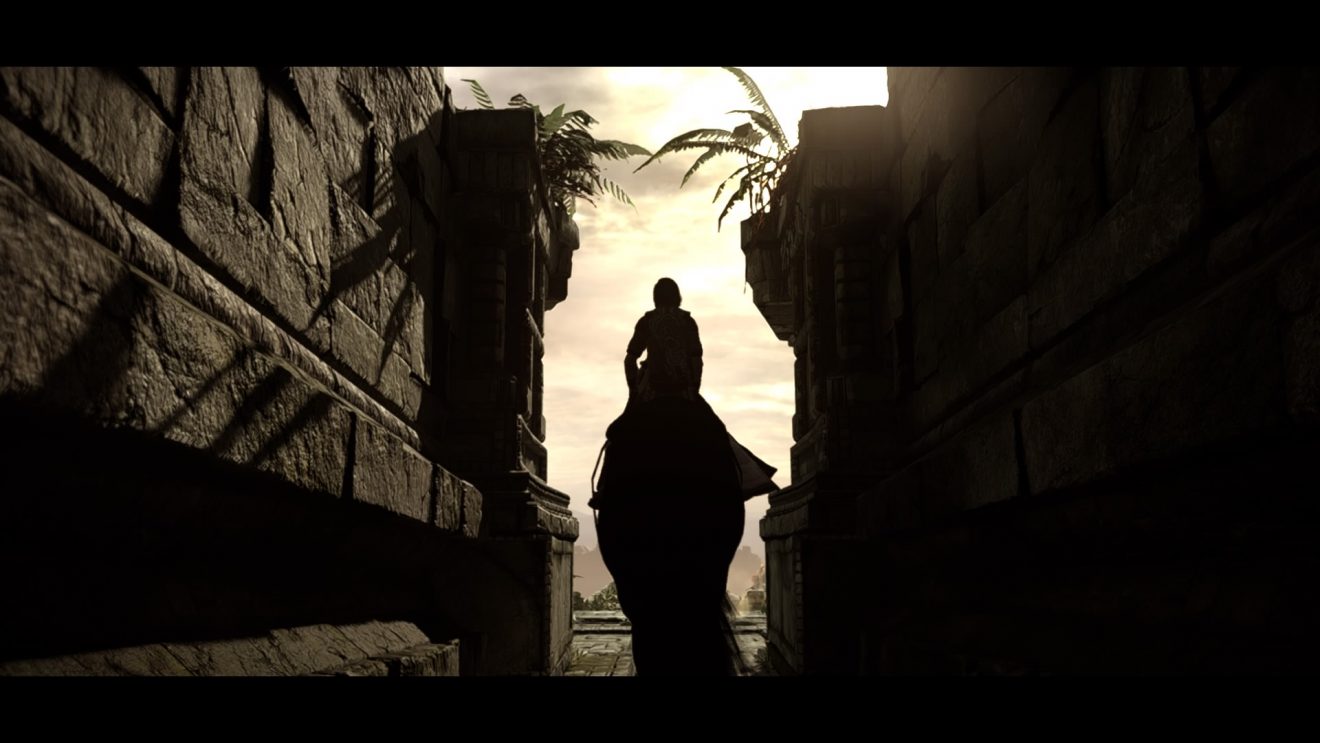 SOTC is a typical Japanese game in many ways and it ain’t afraid of trying new things which work for most of the time but it’s clear early on that this ain’t a game that will follow the traditional game styles we are so accustomed to these days.

I personally think that it was the style and music in the intro that pulled me into the game like no other before it, the story of a boy, a horse and a dead girl and the only thing we get told is that you have to kill all the colossuses in order to save the girl.

Normally such a story wouldn’t mean much but the way Team ICO made this intro meant that I couldn’t switch the game off now! 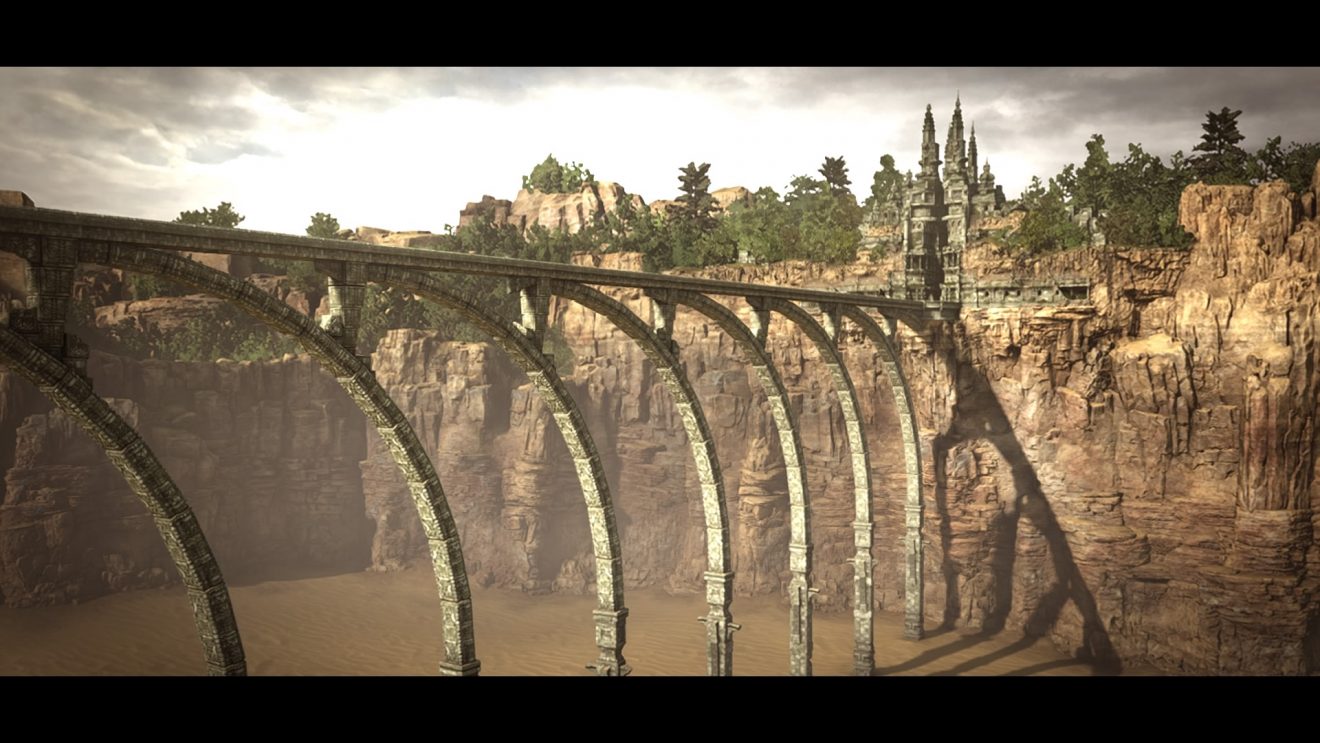 Amazing graphics, stunning locations and almost like if it’s a dream and now thanks to the PS4 version the game is fully playable too with redefined controls and better framerates. 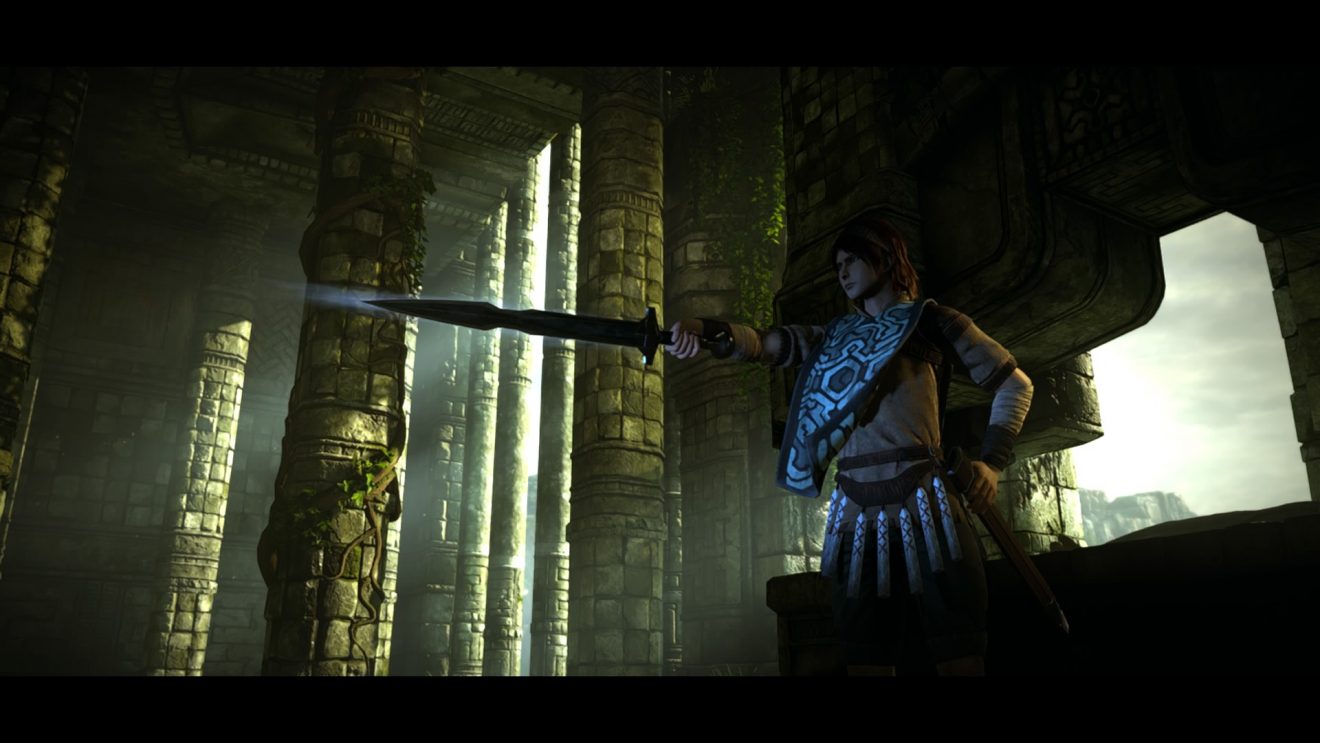 Meet Wander or Wanda and his sword, the sword has the ability to show weaknesses and the only weapon to slaying the colossi of the land.

Wander raises his sword in sunlight to cast a beam of light to find the location (err.. direction) of the next Colossus, there are no upgrades or such for the sword and same goes for the bow and arrows that you also got (but mostly never use), the only upgrades you get in the game is the stamina and health which is got by picking up apples and lizard tails but they are hidden well and there certainly ain’t many of them, luckily you do get upgraded when defeating a colossi but only way to replay those is by completing the game and start a new game (stats carries over). 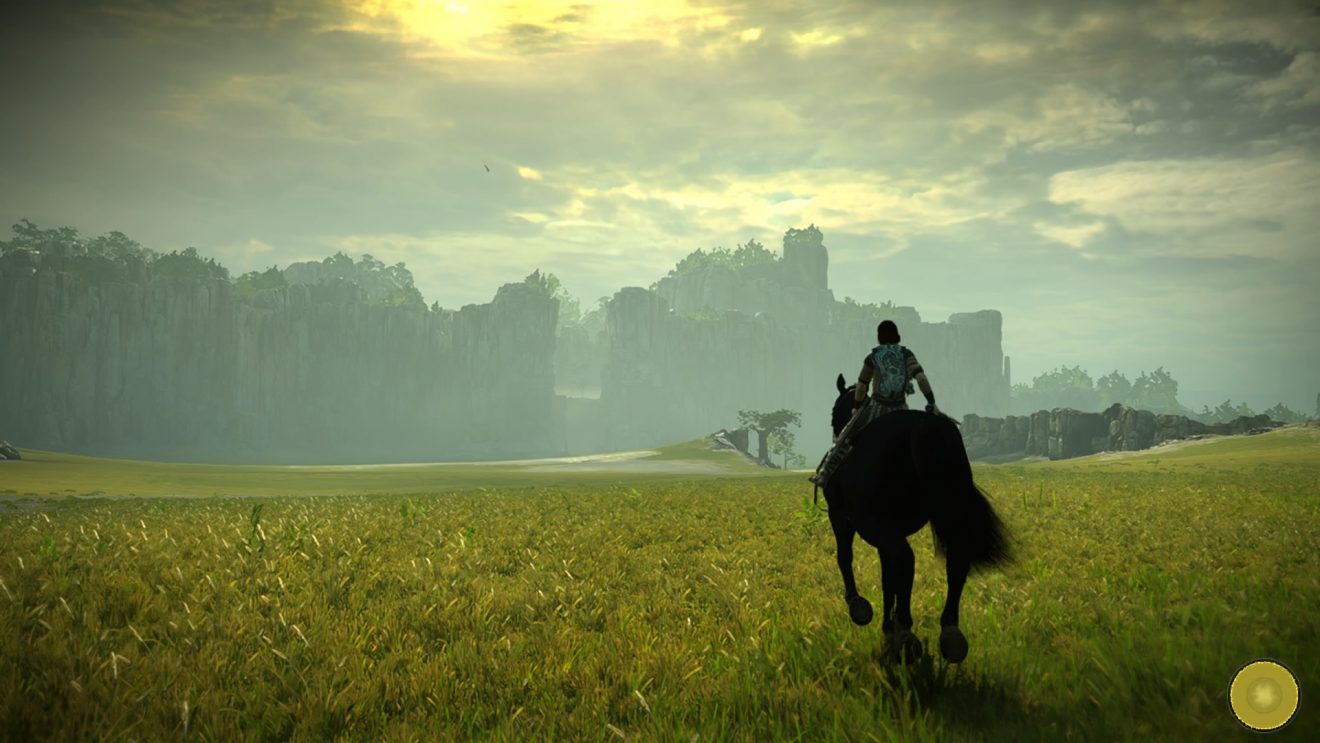 You have to use your horse Agro quite a bit in the game, not only because of the vast open landscapes that take ages on foot but also because there are places where only Agro can pass, there are also boss battles where you must use the horse too. 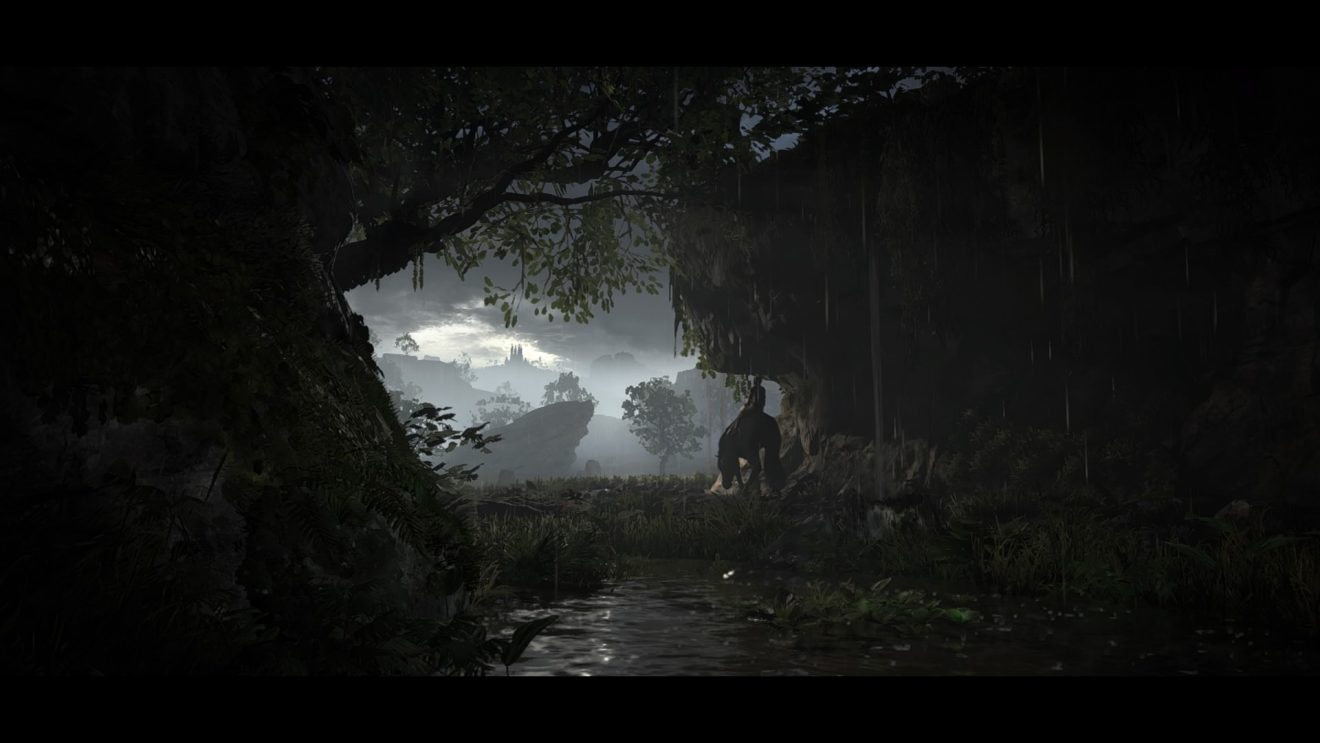 Amazing looking locations, seriously this has to be some of the best graphics ever in a game right?

The best part of all is that it looks even better in motion, everything is moving and the sound plays a huge role too. 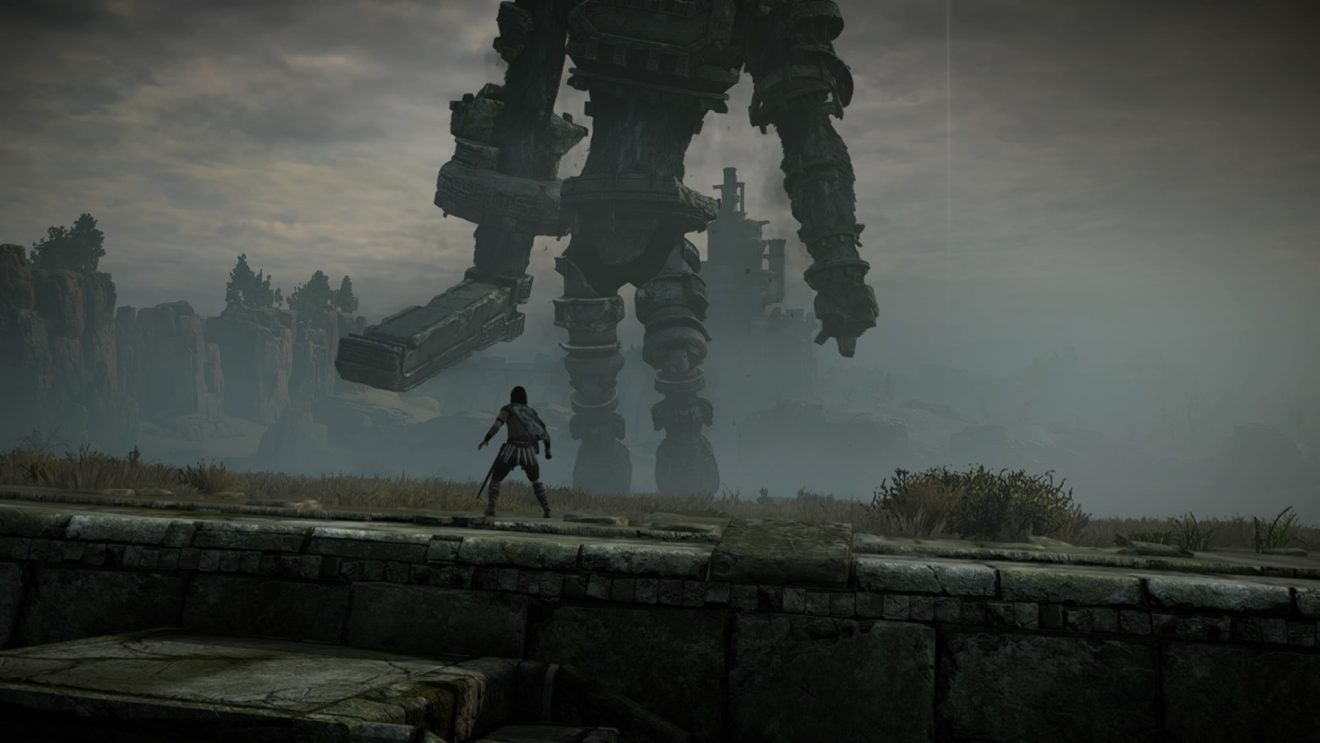 The mission is simple, climb all the way up to the top of the colossi and find his weak point and then use the sword on it.

That might sound simple but finding the way up (there are multiple ways for every colossus) can be a very demanding task as the colossi will do everything he can to kill you and to make things worse you can’t hang onto it endlessly either because you consume energy by holding onto/climbing the colossi which means you need to find places to rest while you climb it. 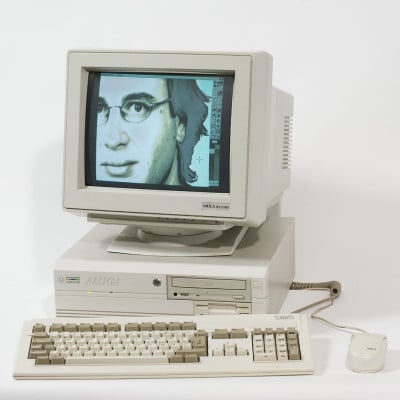 So how can we thank the Amiga for Shadow Of The Colossus then?

Well, the director of the game (and ICO+TLG) Fumito Ueda started out on the Amiga and he chose that machine because of the graphics capabilities and animation, he also mentioned that he had seen a popular Amiga Tech demo called “MEGADEMO” earlier which was, in fact, non-other than the scene demo RedSector (RSI) MEGADEMO.

He then created several things on the Amiga for both TV and future projects but he eventually sent a CG animation to a company called Warp which was a company that wanted to do cinematic games (most known for their game series “D” ) and that is how his career as a game developer started.

He continued being an avid Amiga user and gamer and took inspiration from European game design like Another World and Flashback (he even used some of it in SOTC) but he continued doing art and he eventually grew tired of working at Warp and contacted Sony where he presented his first own game idea, a game most gamers our there know by the name of ICO. 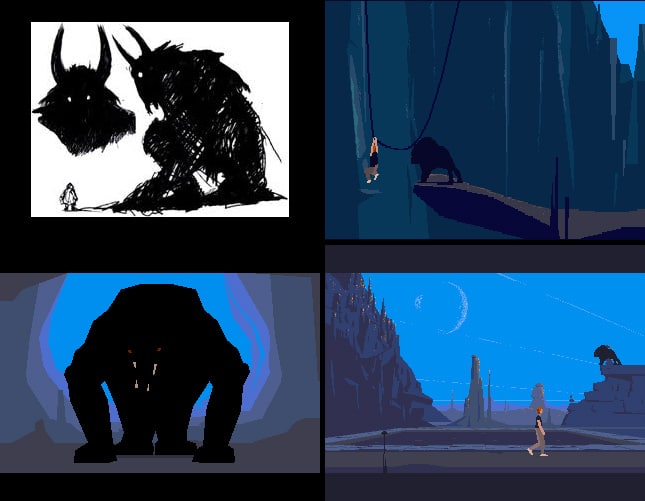 Here are some of the art and inspiration from where he got it, yes this is the Amiga version of Another World and yes Ueda was an Amiga nut.

Want to read the whole interview? have a look here, there are more resources out there but this one is a good read and worth your precious Amiga time.

The interesting thing about this story is that Amiga was actually a thing in Japan for some years, several TV shows were made entirely on Amiga, several huge 3DO and PlayStation games (Parappa The Rappa anyone?) were made on Amiga and while we do know that there are a lot of Amiga love in the world it’s always fun to read that the European Demoscene sold Amiga’s in Asia. 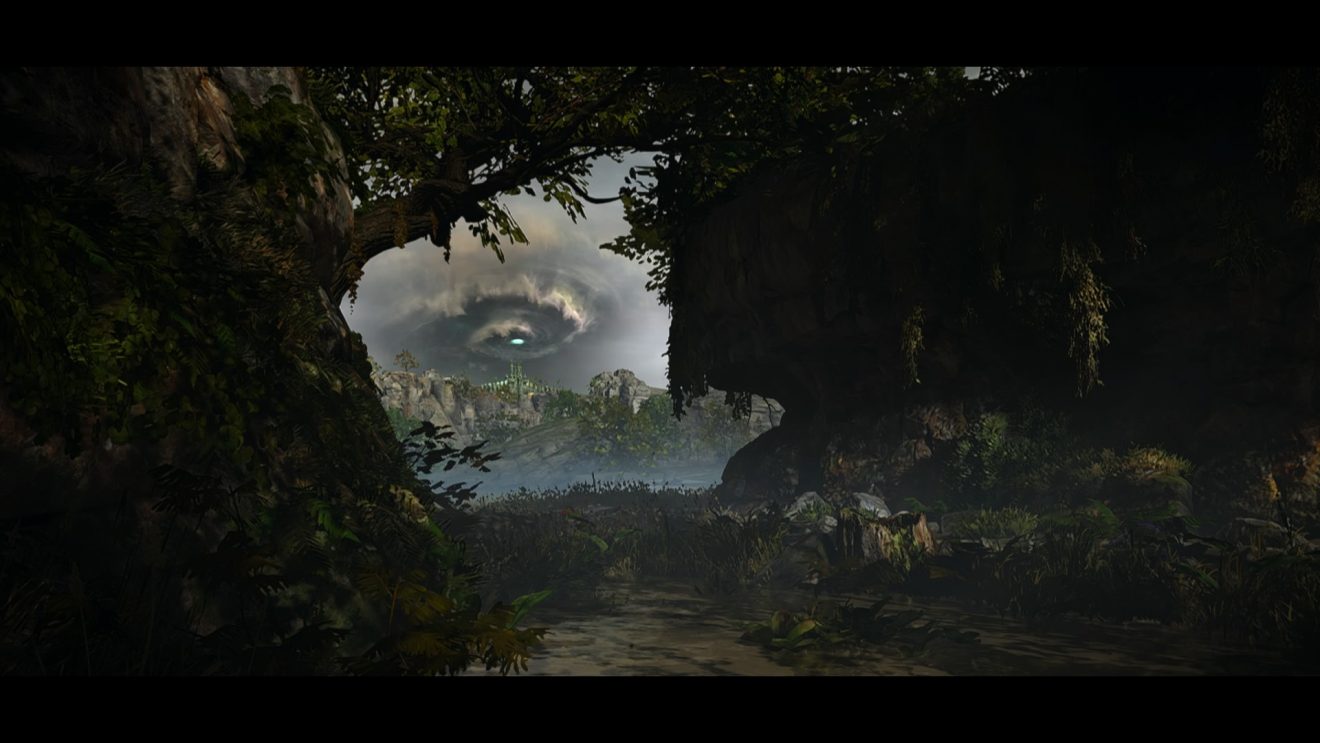 Bluepoint Games first remastered Shadow Of The Colossus in 2011 for the PS3 and that version was more than good enough and my first reaction to when they announced a whole new remake in 2017 was 50/50 split between OH MY GOD and WHY?

A little over a half year later, I was playing the new remake the only thing I said was OH MY GOD!

I have attached a small video (FULL OF SPOILERS!) which shows the differences between the three versions.

The new remake fixed everything that the critics had complained about, the game felt streamlined now with no fog, motion blur, low polygon count, broken controls and bad framerate throughout the game, it felt like the exact same game just cleaner and it worked without destroying both the original and remaster.

But, yes the mystery feeling from the PS2 version is gone now and I somewhat miss that, the draw distance was so “bad” and the graphics were so demanding that everything had a very dreamy look, well at least how I picture my dreams anyway.

The new remake looks downright amazing and without doubt one of the best looking games ever made, the attention to detail is impeccable and everything just screams art but i really can’t recommend enough that the fans should be playing both the original and this new remake.

This is the original PS2 European release, a rather nice and colourful slipcase. This was my first proper collectable on the PlayStation2 and yes this game was one (Prince Of Persia and God Of War was the two other reasons) of the reasons why I got the console again back in 2005 (I also had one in 2000/*2 but I sold that at one point).

The stuff inside looks just as good as the front box, epic is the best word I can think of.  The art cards included are some of the most special ones that I have seen for games of this generation (PS2). 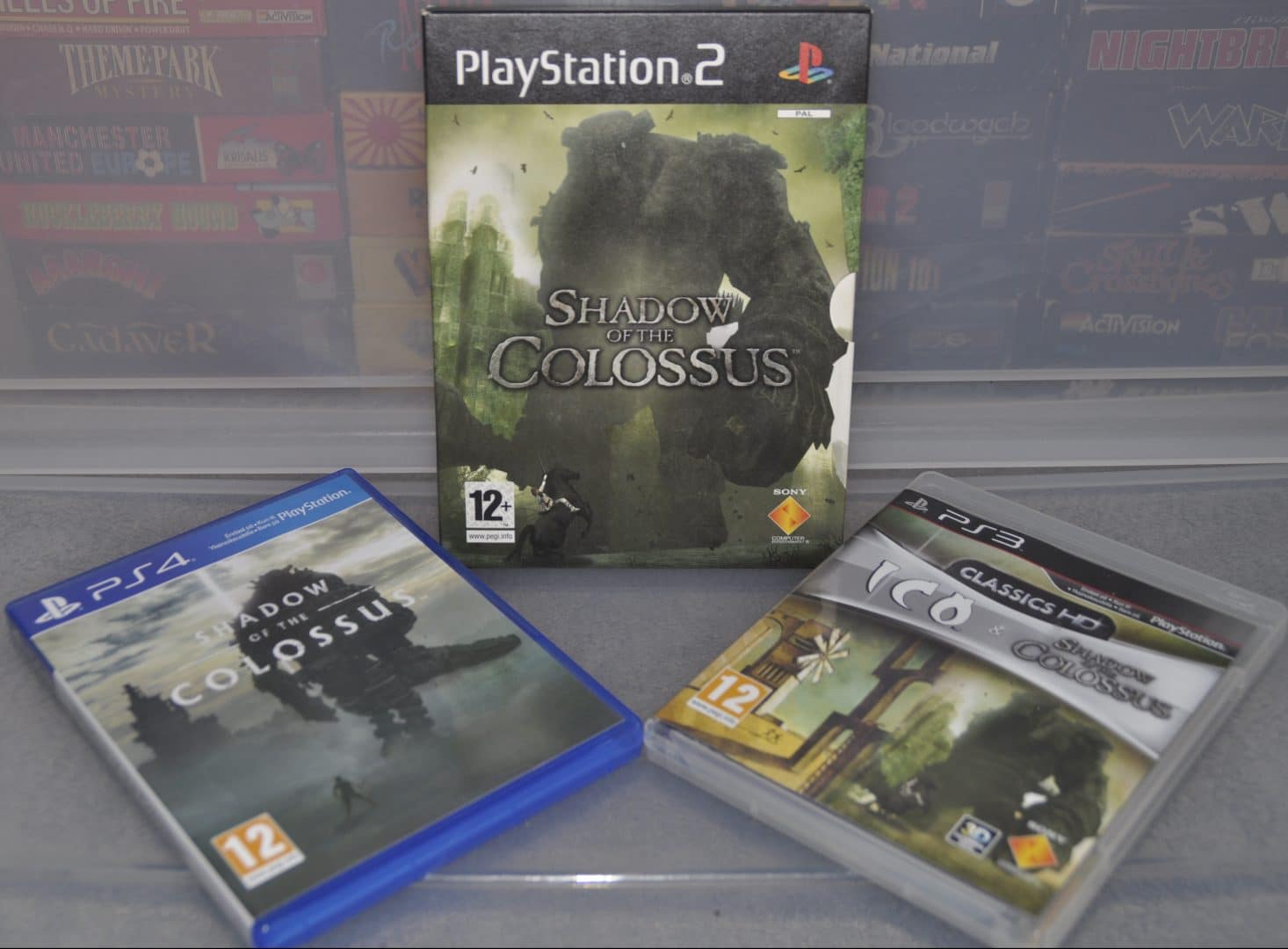 All three versions of the game shown above, I always wanted some special edition box or whatever for all versions but I never did come across them, there was a really nice review copy sent out to some sites and magazines for the PS4 version but I just got the standard one as this ain’t a super-duper special PlayStation site 😀

Shadow Of The Colossus is a fantastic gem of a game, it is among the best games that I have ever played and it was that for a very long time only to be beaten by last years GOD OF WAR (2018).

Not played Shadow Of The Colossus? Well, then go grab it right now and give it a chance, if you got a “PlayStation Now” subscription then you can also find it there too now.