Star Soldier just had it’s 30th Anniversary a few years ago and for some reason, oddly enough no one hyped that up with a re-release or anything.

The franchise started on the Famicom/NES and then eventually moved on to the TurboGrafx-16 and after that, it took years before it was revived again.

OK, yes there was a Nintendo 64 version indeed, but the less we speak about that the better right?

Star Soldier came back in the early 2000’s for the PlayStation 2 and GameCube format and this is where this PlayStation Portable version originates from, ported and enhanced but based on them. Hudson went into liquidation back in 2012, how such a strong name managed to do that is beyond my understanding, but then again most old-school companies just can’t stay afloat in today’s market sadly.

Bomberman, Adventure Island, Bonk/BC/PC Kid, and the instant Amiga hit Yo! Joe! – Beat The Ghosts – is just a few of their classics. The quality they showed over the last 30 or so years means that Hudson will be remembered by both name and game for sure, may they R.I.P.

”In January 2011, Hudson Soft Co., Ltd. was acquired by and became a wholly owned subsidiary of Konami. The first thing that you see in Star Soldier on the PSP will most likely be this screen, yes it’s actually a warning that you have to turn the handheld into “TATE” / vertical mode.

The word TATE might not be the most used word around here but its basically the Japanese word (tah-tay) for Vertical screen mode.

Yes, Star Soldier is one of those few PSP games that indeed use this mode, others that support this mode is some Pinball games from System3/Farsight Studios.

Playing while holding the PSP vertically does feel weird at first for sure, but it won’t take you long before you forget it and that’s when the fun starts.

Star Soldier comes with a lot of options and game modes, Auto fire being the most pleasant one due to it being a handheld game and all, that said, it can be switched off for those of you who want it more brutal.

The difficulty settings certainly help the n00bs out there and for first timers of the game, it is recommended to start at easy just to get into the gameplay mechanics.

Once you complete the game (10 stages) is where the fun starts, you unlock new game modes and a newgame+ mode too, you will find a proper challenge here for sure.

There was also a leaderboard website on the internet where you could input a randomly generated code that was acquired when completing the game.

If this website/service is still operational is unknown for now (can’t find anything on google sadly).

There are 3 ships to chose from which means that there’s something for everyone here, the middle one (ENIGMA) is the most brutal one, the game will get too easy once you fully upgrade that one, that said I always prefer the first one (A.CAESAR) anyways as it moves faster and its just more fun to play with.

As with all shooters, there’s always one ship that I suck at…  Yup, you guessed it…

Oh and, yes you can unlock a bonus ship although that can be hard without some idea how to do it, I’ll give you a hint (thanks Mosaic / GameFaq!):

Attack the level-8 crab boss until it transforms into its ship form. Do not destroy the boss. Instead, avoid its bullets until it leaves the screen. You’ll unlock the fourth ship for your trouble. Using stage select to warp directly to level-8 is OK.

This remake use 3D Polygons instead of sprites and 2D graphics in a way that doesn’t ruin the fun at all, the speed (as with all SS games) can be a bit too quick for some but once you get used to it, well you wouldn’t want it any different.

The upgrading system can be really brutal, it’s easy to find them but actually picking them up can be a different story as they fly out of the screen quickly.

I have yet to see any slowdowns or whatever in the game and that’s quite a feat for such a title with so many objects flying over the screen at the same time as the background is scrolling at 60 frames per second.

The graphics fit perfectly on the PSP screen and this is most likely the best version out there due to the TATE mode and the small/long screen.

The music is as retro as should be, a really strong soundtrack which will make you want to play it more.

Boss battles are one of the things that Star Soldier does best, humongous bosses that throw thousands of bullets at you and the only way you manage to stay alive is due to the brilliant battle music which manages to zone you out of the real world and into the game, you will become one with the game in a heartbeat.

I have included a pretty damn good video of the game here but let me suggest that you try the game yourself instead of watching this playthrough as this is one of those games that YOU just have to play and enjoy to get the maximum effect out of. 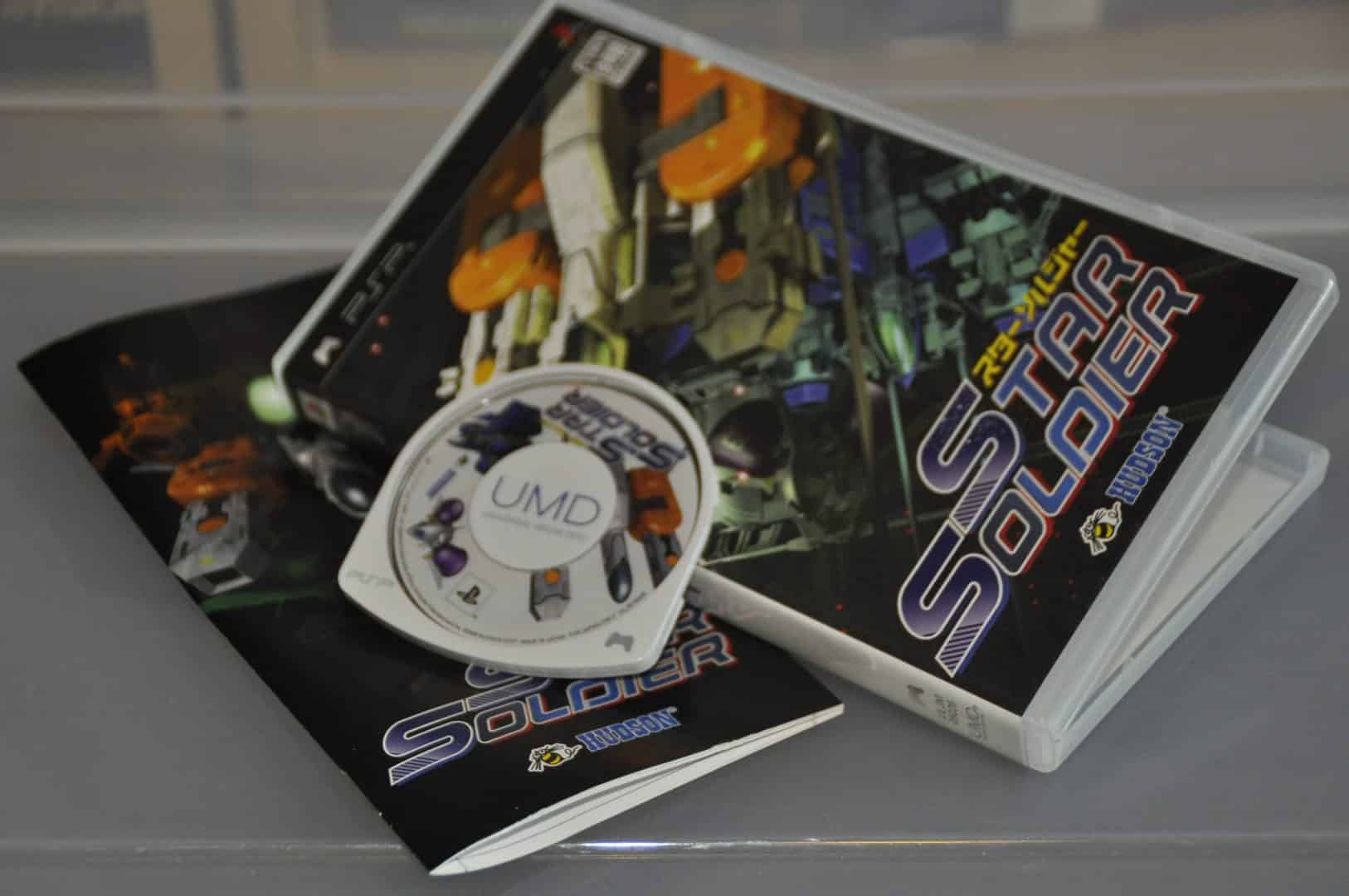 Like many other excellent Shoot ‘Em Up games Star Soldier Portable never came to the west, the only version available is this Japanese version but thankfully the PSP is region free so getting the game to work ain’t a problem either, oh and one more thing, there ain’t much text in the game either, all important stuff like menus is in English.

Star Soldier Portable goes down into the history as one of the better Vertical Shooter games out there, it is definitely the best PlayStation Portable shooter out there and one that every shoot ’em up fan out there need in their collection. An instant classic, finally a remake that beats the living hell out of the original. The game ain’t a technical achievement nor is it full of special effects to use as a showcase title for the hardware, the only reason to hype this game up is for the exceptionally good gameplay mechanics and how well everything is put together to make it one of the best out there. TATE Mode FTW!