Time Crisis was one of those “MUST HAVE/OMG” titles on the PSone,light gun games were pretty “in” back then and every console got one Light gun game series of their own…well except for the Commodore CD32 where the light gun game was cancelled when the market for cd32 titles vanished…

Time Crisis 4 was already an old game when it hit the PS4 in 2007-2008 and while i was pretty hyped for the game it seemed like i was alone ..well except for 1 other guy on my friend’s list… It was pretty clear already then that the TC series had reached a low …very low point and at the time of the release i became pretty sure that there never would be another one released. 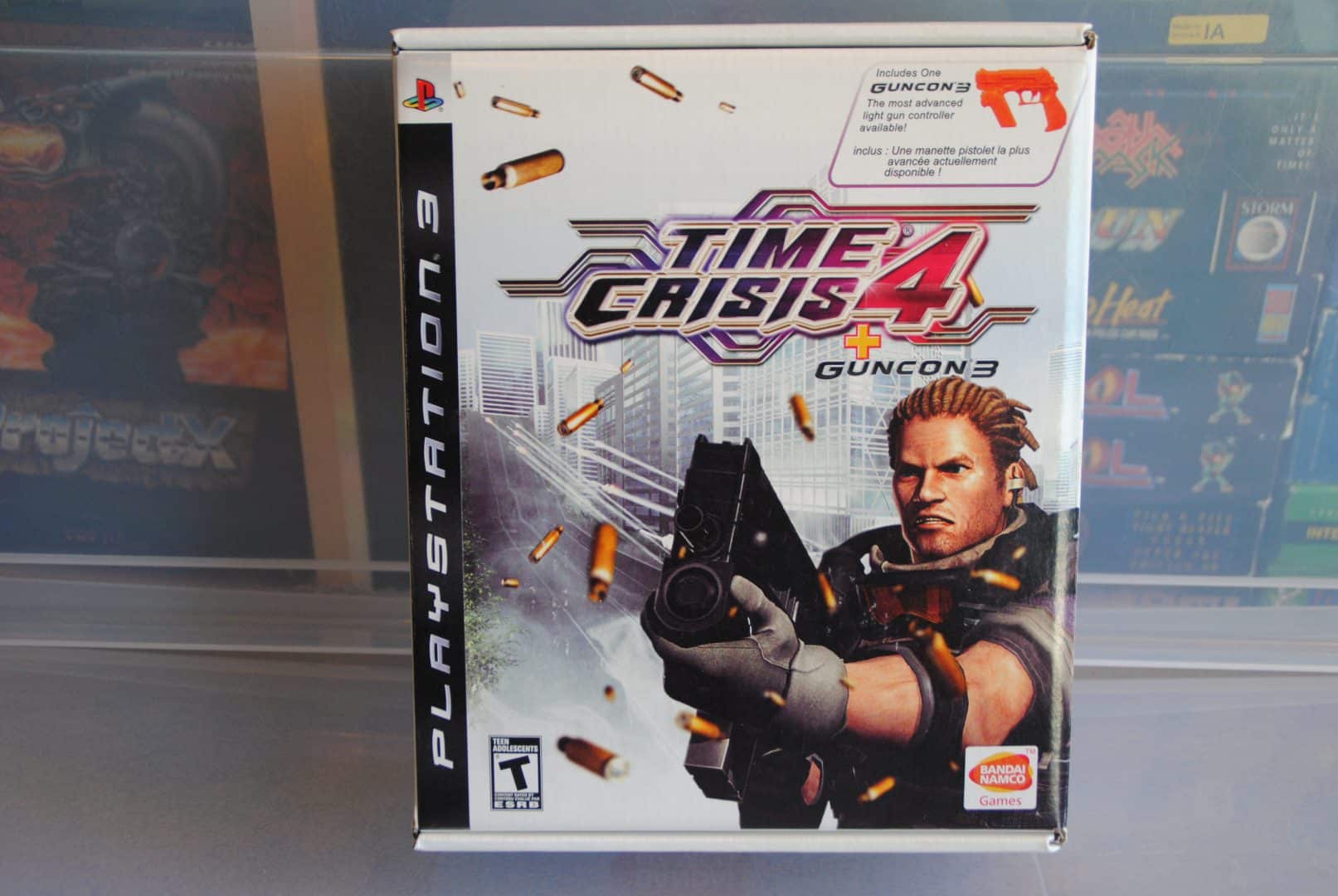 Just like all the other first TC games platform releases this one too came in a big box and also this time around it came with 3 very different boxes, one for each region and i bought 1 US and 1 EU box as the game supported 2 light guns and there was not a separate light gun addon produced/sold, oh and i got it also because the game came out like 6 months earlier in the US and when it came in Europe it had a totally different box design (and box) so i decided to get that one too…for both collection purpose and for 2 player light gunning… 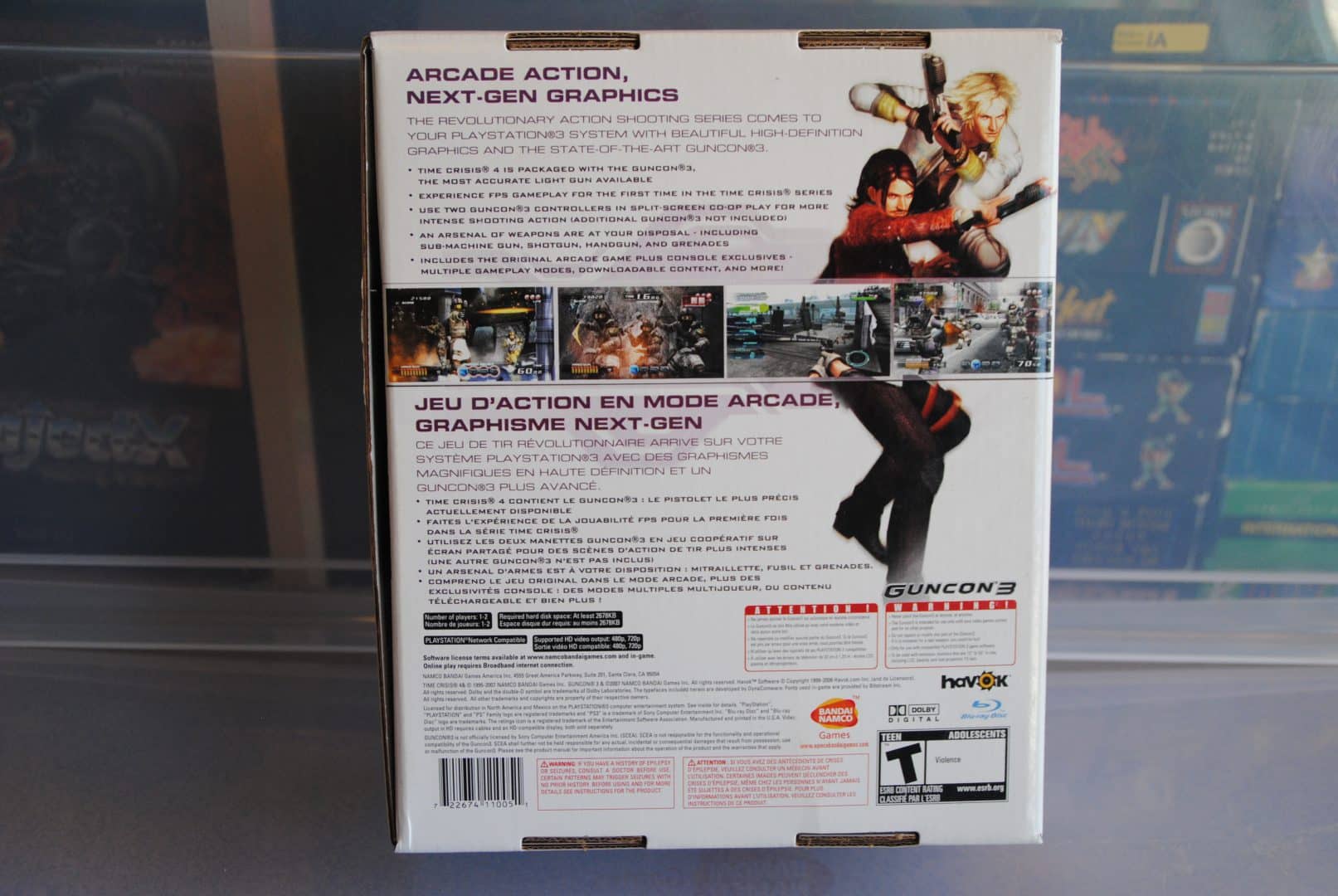 I sold-/traded away my European version to my good Scottish friend MrBubbles, i kinda regret it now but it’s not like i will go looking for one as it was a totally meaningless game to own 2 versions of… in my opinion anyway as the game was rubbish in 2 players and to be honest it wasn’t a good game in 1 player either…not even in the arcade version of the game. 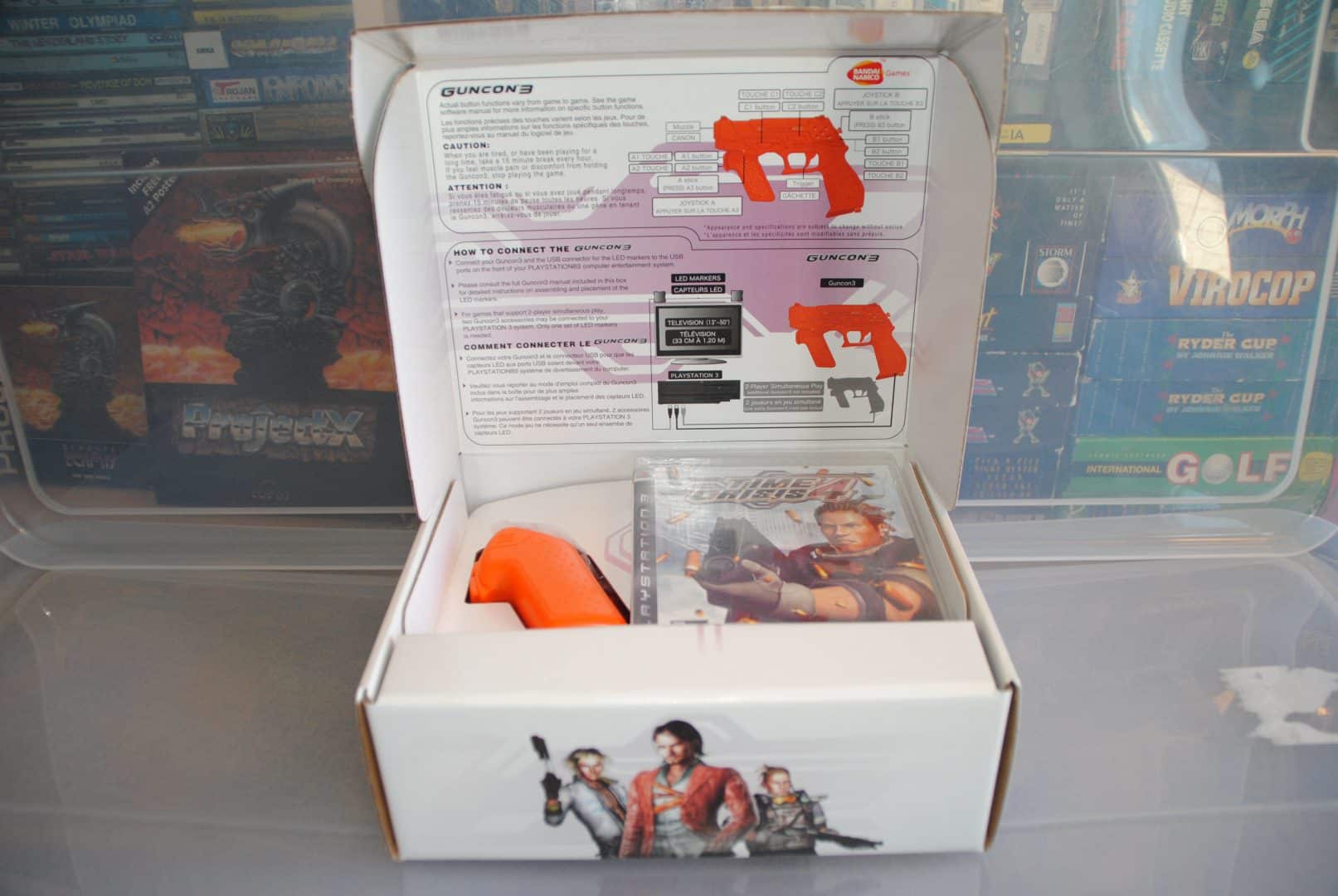 Stiff cardboard box, great quality, and quite a looker but sadly they seem to have spent more time on making the box(es) than on the actual game, at least for the PS3 lightgun specific story based game which btw is not the arcade version but luckily you get both versions here… 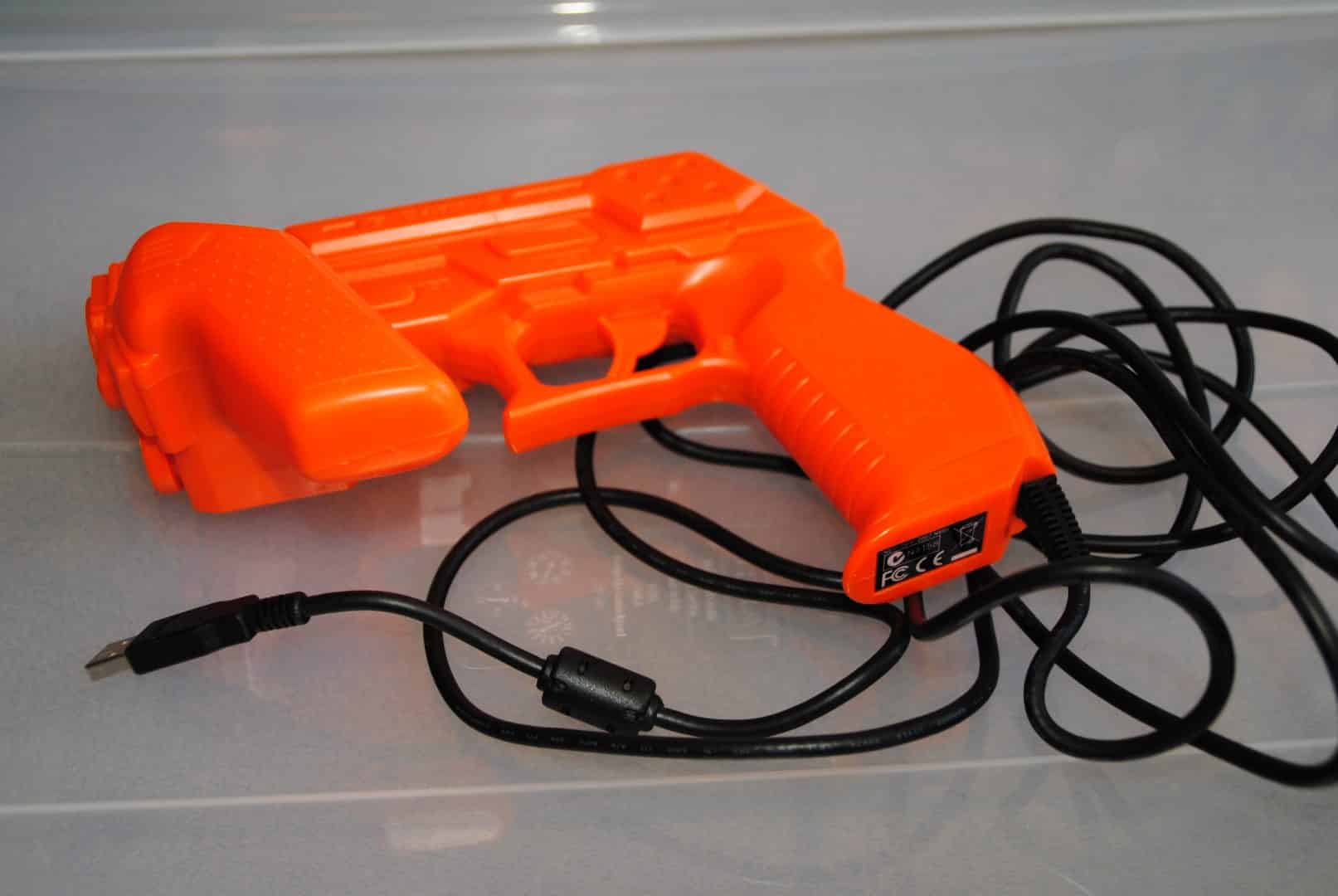 So, the lightgun, quite advanced, lots of buttons, 2 analog sticks and yet it looks absolutely…orange, they had to make it orange as kids these days ain’t allowed to carry a black pistol around…not even if it has a 2meter long cable attached to it….or maybe it’s the cable that is the reason for it as when i go to the local Toys’R Us i will easily find black or grey guns there..

The game.. the gun and game is specifically made for each other, the game includes a First Person Shooter game, with a story where you move around like in any FPS game (quake, Killzone etc) and while the idea and the gun could have been a winner it ends up being some of the most pathetic shit you will ever get to see on the PS3, there..i said it, it’s totally garbage and the only thing the gun will give you is sore thumbs and pointy fingers as it’s far from being good to use over a longer period of time but the game itself is so rubbish and hard to control (unprecise) that you end up doing 10 more moves than you should have.

The Arcade version is on rails like all other TC games so that is fine with the gun but what is the point with the gun there… sure it’s fun but the gun is so “big” that it all feels wrong. 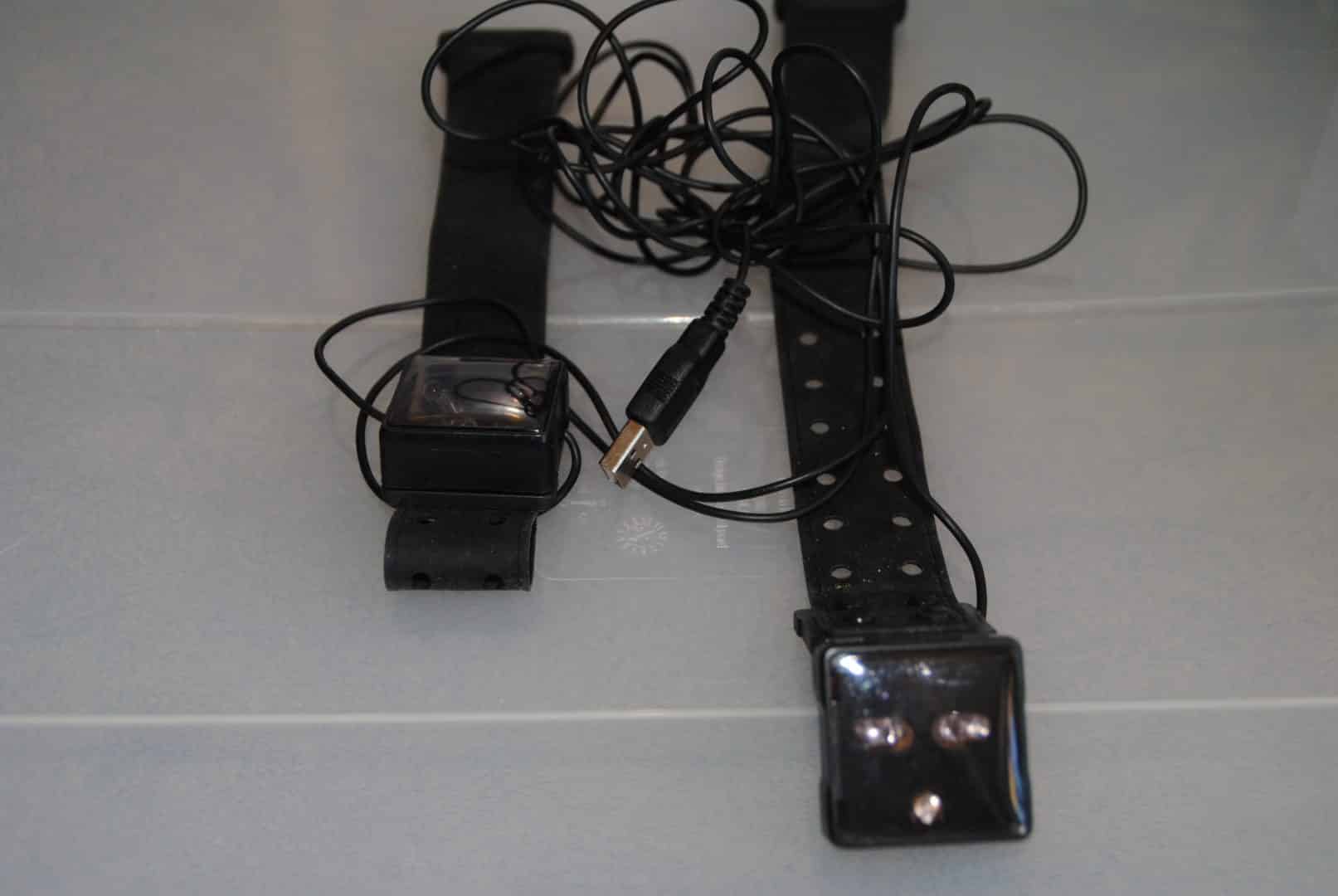 Umm, see those?, yup sensors, they’re required as today’s TV’s can’t use a normal lightgun so these “Wii” tech sensors will do the trick… they’re ok enough and they sit well on top of the TV due to the weights they’re attached to (great idea actually).

See that cable?, yup its USB , just like the gun… so to be able to play the game you will need 2 USB slots and if you want to play 2 players you will need 4 USB slots… only 1 ps3 model has more than 2 USB slots…. oh and it uses so much power that if you use a HUB and 2 guns and sensors the PS3 USB system will start power itself off and on making the guns even more unresponsive even if it’s just micro/milliseconds. 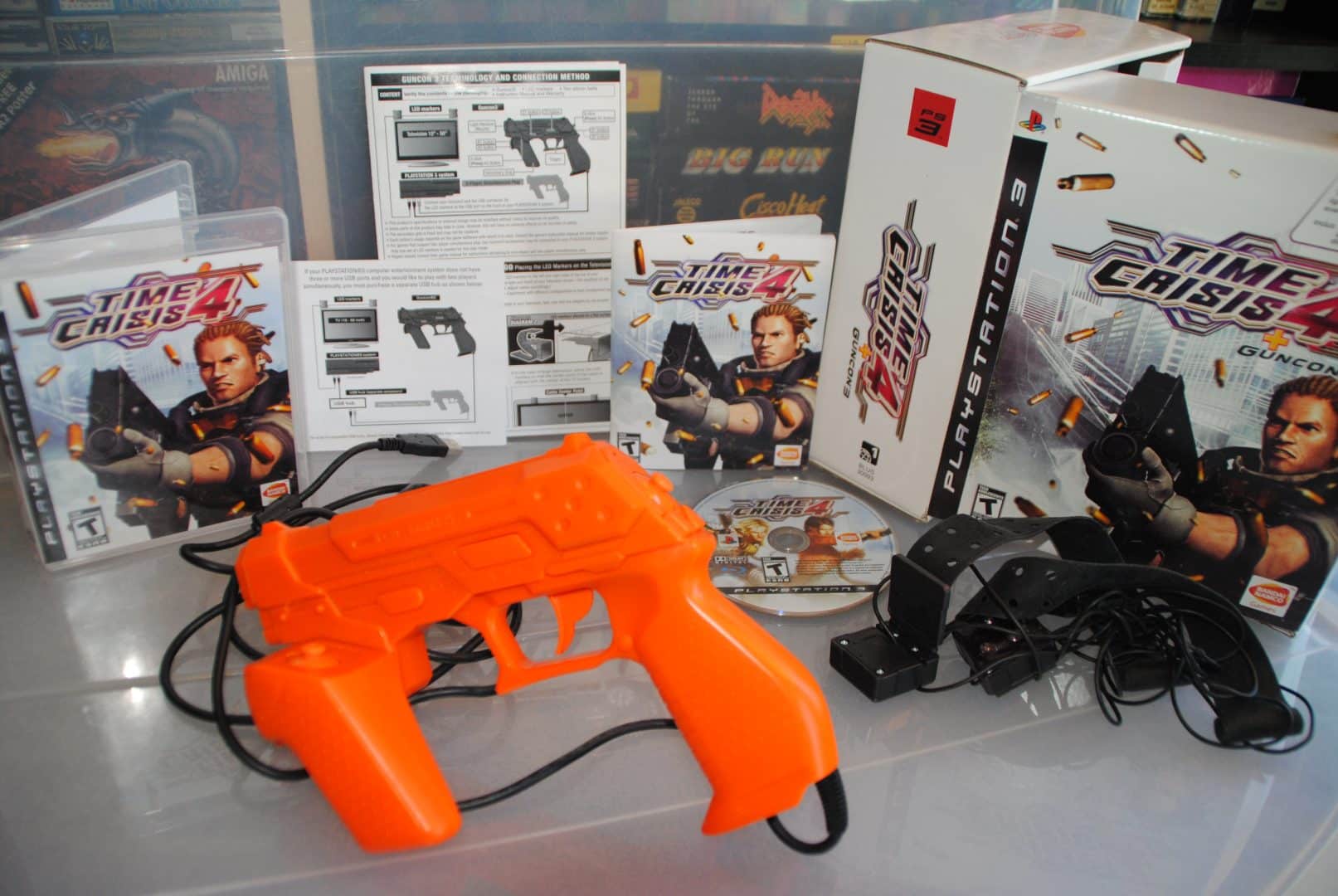 Here’s the full package, and it’s a good one but shame about the actual PS3 specific stuff, 2 years ago they re-released the game without the story/ps3 mode and while it supported the gun they still didn’t sell it but luckily they decided to add both Trophies and PSMove Support to it.

The re-release was a PSN game but it was also bundled on Bluray with the horrible Time Crisis Razing Storm although it also included a very good 3rd game which was called Deadstorm Pirates and that game alone was well worth that Bluray but then again it also came as a standalone game on the PSN store too.