When I started writing on this blog, I told myself that I would never review a game without completing it first.
Even when I incidentally did, I was already beyond 70% in the game and I kept updating the article with my progress and impressions until the very end.

After careful thinking, I’m partially going to break that agreement today, reviewing an Atlus product. Here is why:

1) we will be talking about an old game that likely not many of you have played (and probably never will!);
2) I played the game long enough to develop my own opinion, which was comforted by a number of critics and gamers reviews. I’m therefore pretty confident that what I’m going to write is, to the best of my knowledge, true;
3) Even if flawed, I thought that the developers showed great courage in trying to create something new and totally different, and I believe we should give them credit for this;
4) as stated on their website (www.atlus.com) Atlus got acquired by SEGA SAMMY. According to Naoto Hiraoka – President and CEO – this agreement will be effective starting from November 1st, 2013. I thought to write something about an Atlus game while Atlus is still the company we know;
5) I recently promised you more Atlus contents and I’m going to keep this promise regardless of anything else! 🙂

I’ll start by saying that the original concept for this game was developed by Japanese software house StingEntertainment, who actually produced and sold it in many different forms (and for many different platforms), before handing the product over to Atlus for the PS2 release.
Sting developed Baroque for the Sega Saturn first (1998) and PSOne afterward (1999). 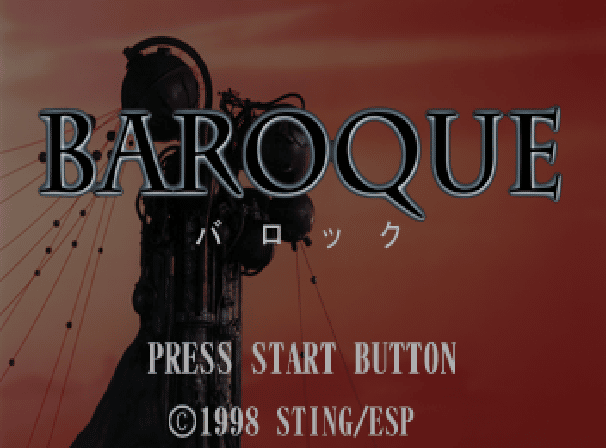 In 2000, the series got larger with the introduction of Baroque Syndrome, which played like a visual novel and served as a prequel to the game. 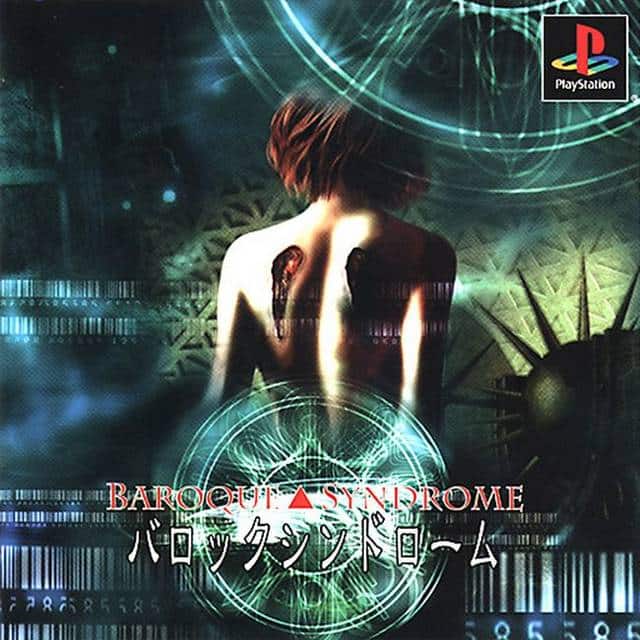 Sting also developed and released a scrolling shoot ’em up, Baroque Shooting, and a typing game, Baroque Typing, for Windows, in 2000 and 2002 respectively. These games were released only in Japan. 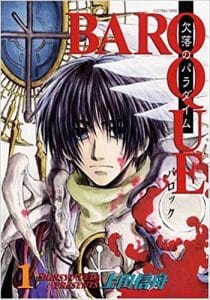 Finally, after reaching an agreement for a partnership with Atlus, Sting recoded Baroque for PS2, this time using a third person view (the original one was an FPS). Baroque (PS2) was then released in Japan (2007) and finally in the US and inside Europe (2008).

The story was also turned into a manga which was published by Square Enix in Japan between 2000 and 2001.

Despite its initial released with a different mechanics in mind, the PS2 title was positively influenced by the change in leadership and all the character (and the dark and oppressive atmosphere) turned Baroque into a true Atlus product (IMO, at least).

Baroque’s story takes place following a world-altering cataclysm called “The Blaze” that took (will take?) place on May 14, 2032. The world, now existing in a twisted state, is populated by Meta-Beings, creatures that were once human but that have lost their hearts and minds to the Baroques inside them.

The player’s goal is to reach the bottom of the Neuro Tower, the former home of the Order of Malkuth, a religious organization seeking to save God.

At the beginning of the game, the protagonist is told that by purifying the Meta-Beings within the tower and purifying the being on the bottom floor, he will find redemption for sins committed that he cannot remember. 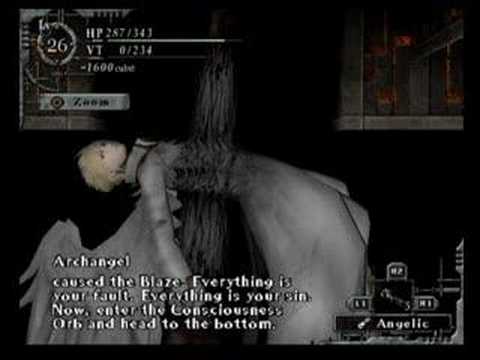 Apparently, the entire cataclysm was his fault, and he is the only one that can, eventually, put an end to it.

Randomly generated, the majority of the layouts of the Neuro Tower’s floors change each time the player ventures inside.
Portals found on each floor of the tower will transport the player to the next floor. 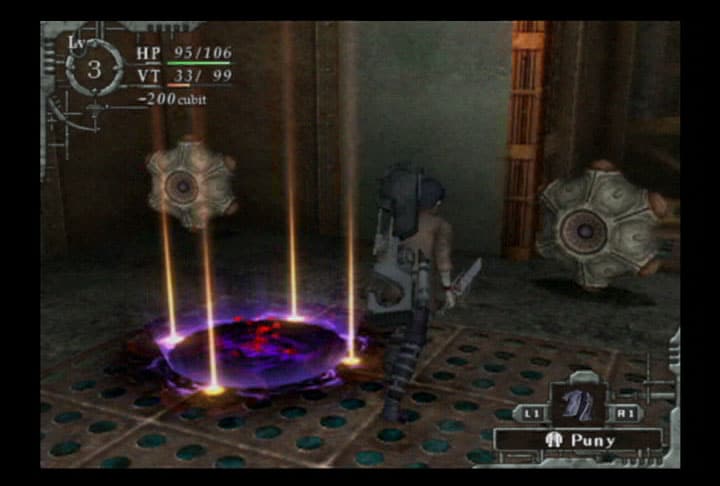 Death in Baroque does not result in a game over screen, but advances the plot, unlocking cutscenes, new areas, and comments by the non-player characters since the Neuro Tower expands after certain conditions are met. The player character begins the game outside of the Neuro Tower with no items or experience points. Before entering the Neuro Tower, the player is presented with an Angelic Rifle, a special weapon that can destroy any monster with a single shot. However, the rifle has an ammunition capacity of five shots. The player can find items, swords, and equipment scattered around the tower at random and by defeating enemies — which also grants the player experience points, allowing the player character to gain levels and become more powerful.
However, should the protagonist die BEFORE reaching the end of the dungeon, the player will be returned to the starting point outside the tower and will lose all items, including those equipped, and all gained experience points? By throwing an item into a consciousness orb, the player can retrieve it from one of the non-player characters on the next play-through. Up to five items can be saved in this manner at the start, but the number can increase if certain conditions are met.

The most popular complaint focused on the game’s extreme difficulty curve. Magazine RPGFan explained that “…it is not for everyone. Only those who truly appreciate rogue-like RPGs will be able to get the most enjoyment out of it.”

Believe me, this statement is so true that, in the end, I had to give up: I decided the experience was way too much time consuming compared to the little spare time we all have. Nonetheless, in a different world, I would have pressed on, since I believe that there was much more than met the eyes here.
Sure the game was difficult; sure wandering around in such a harsh environment gave me a sense of nausea and dizzyness (or was it the ramen noodle I ate that day to save time while playing?); sure the plot is, at the beginning and for a long time, extremely cryptic, but somewhere deep inside I felt (and I still feel) that all my efforts would have been fully repaid. Baroque is a game of life and death. You start the game with no hint, clue or whatsoever. You will enter Neuro Tower and you WILL DIE.
But if you continue in your desperate fight, you WILL win and get your – well deserved – reward. Too bad a day has only 24 hours in it… 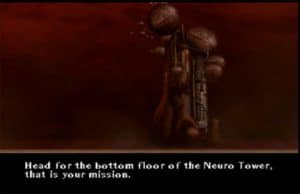 Pictures were taken from www.gamefaqs.com
The text was partly taken from en.wikipedia.org

1 thought on “Of Life and Death – Baroque”