I’ve been joking a lot about the PS4 being the master of remakes lately and guess what, i actually meant it too albeit not in such a negative way as many would like to think it is.

There’s been loads of good remakes and ports for the last couple of years and i welcome those like butter on bread, it is the bad ones and quick money grabs that i hate – oh and of course if they’re blocking new games to come out.

Wonderboy – The Dragon Trap was one of the titles that popped up on pre-order at the PSN store a while back and i have to admit that i got very happy right away although very sceptical too. 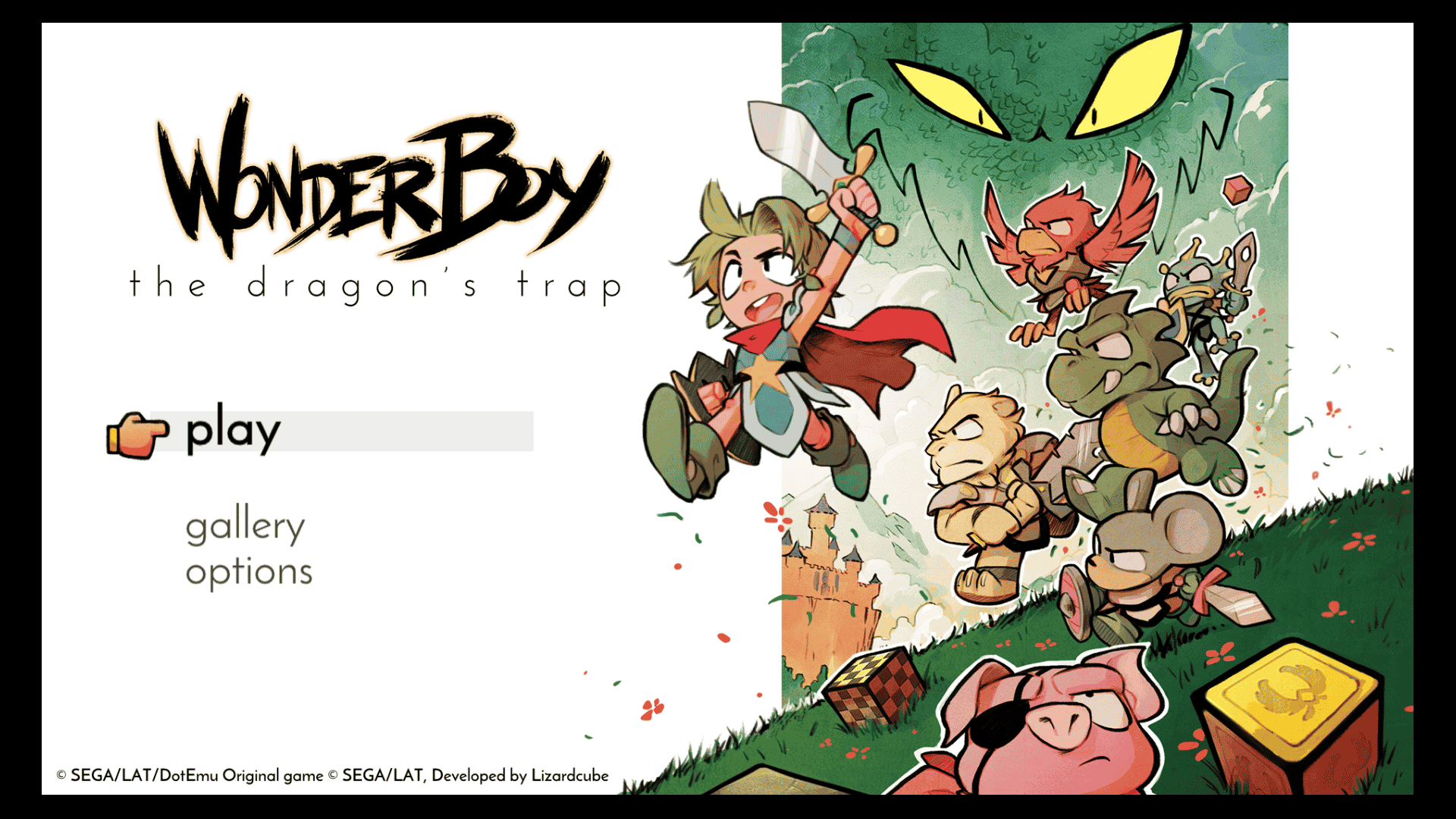 So the build-up towards mega hype started, the trailer looked incredible and so did the gameplay too, but the question that kept popping up in my head was “will it be good enough to not destroy the classic game”.

So what do you do if you are going to remake one of the best games out there?… 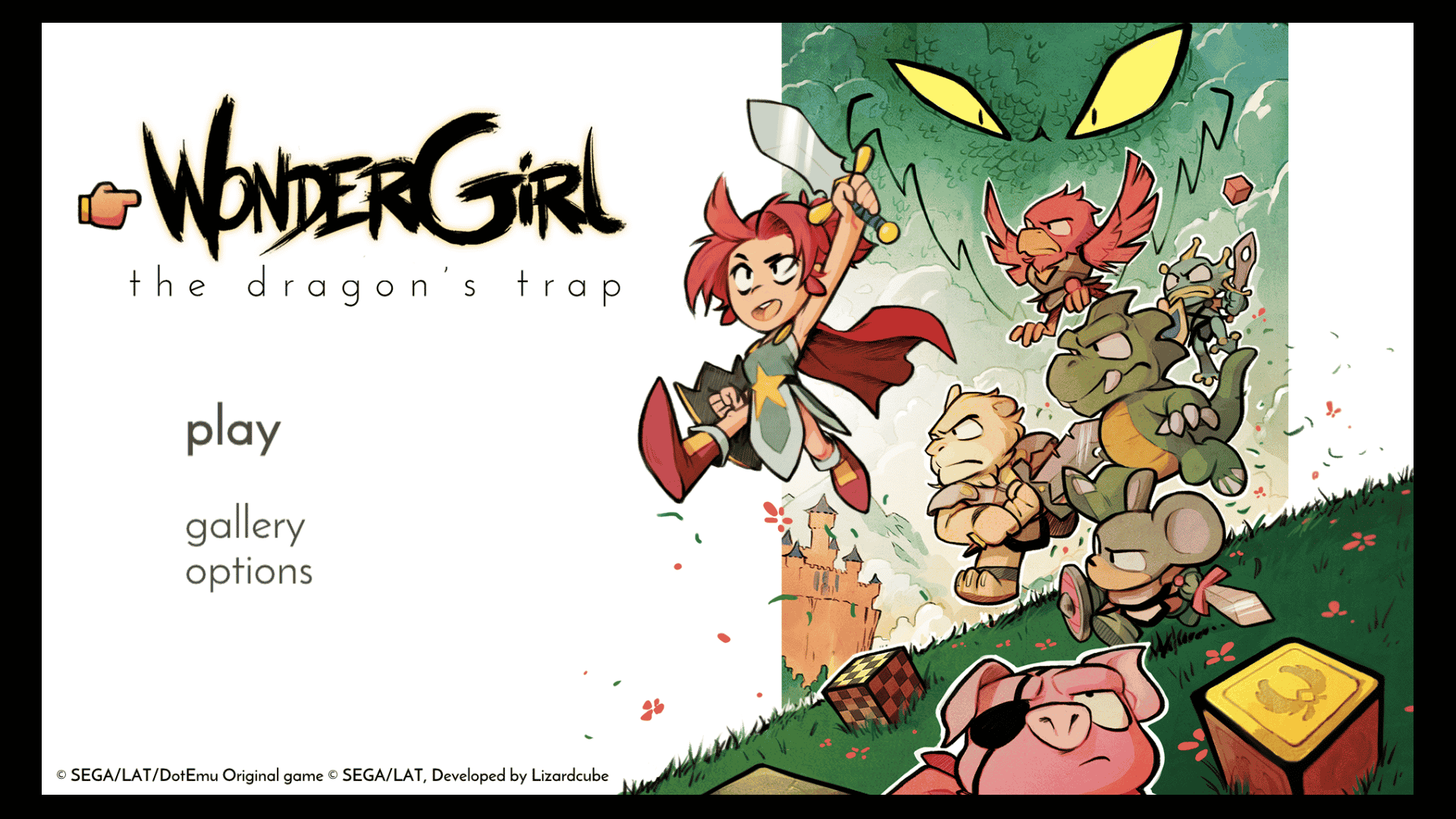 Well for starters they added a new feature, WonderGirl.  Did anyone, i mean, ANYONE ever wants this?.  I mean, yes i have that guilty pleasure of always selecting a girl/woman in a game if there is such an option, but come on?… Wonderboy ?… the name WONDERBOY… what is this female WONDERGIRL… I SHALL CALL IT WONDERBOYGIRL from now on. OK!.

That said, the graphics on this new girl thing is absolutely gorgeous, and believe it or not – I LIKE IT!.

Should i go for a boy or a girl for my first playthrough? , a boy, of course, she was too young for me you know.. 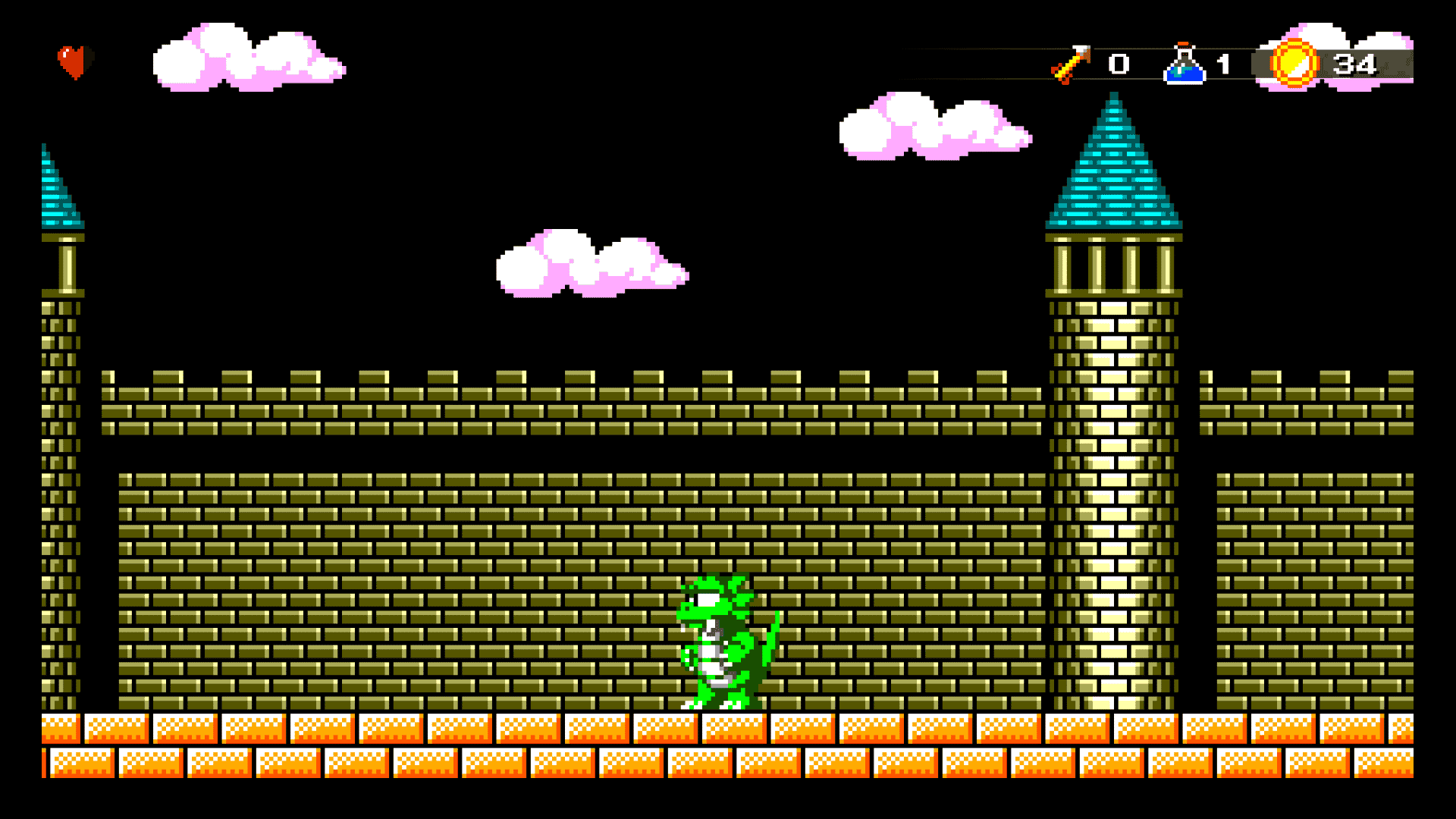 Over to the game then, one of the best features of the game is that you can play the original game anytime you want, a button press and you switch from 8bit to current gen version.

The game looks really good in its 8bit gfx style too, so it’s not like you won’t ever use it or anything. 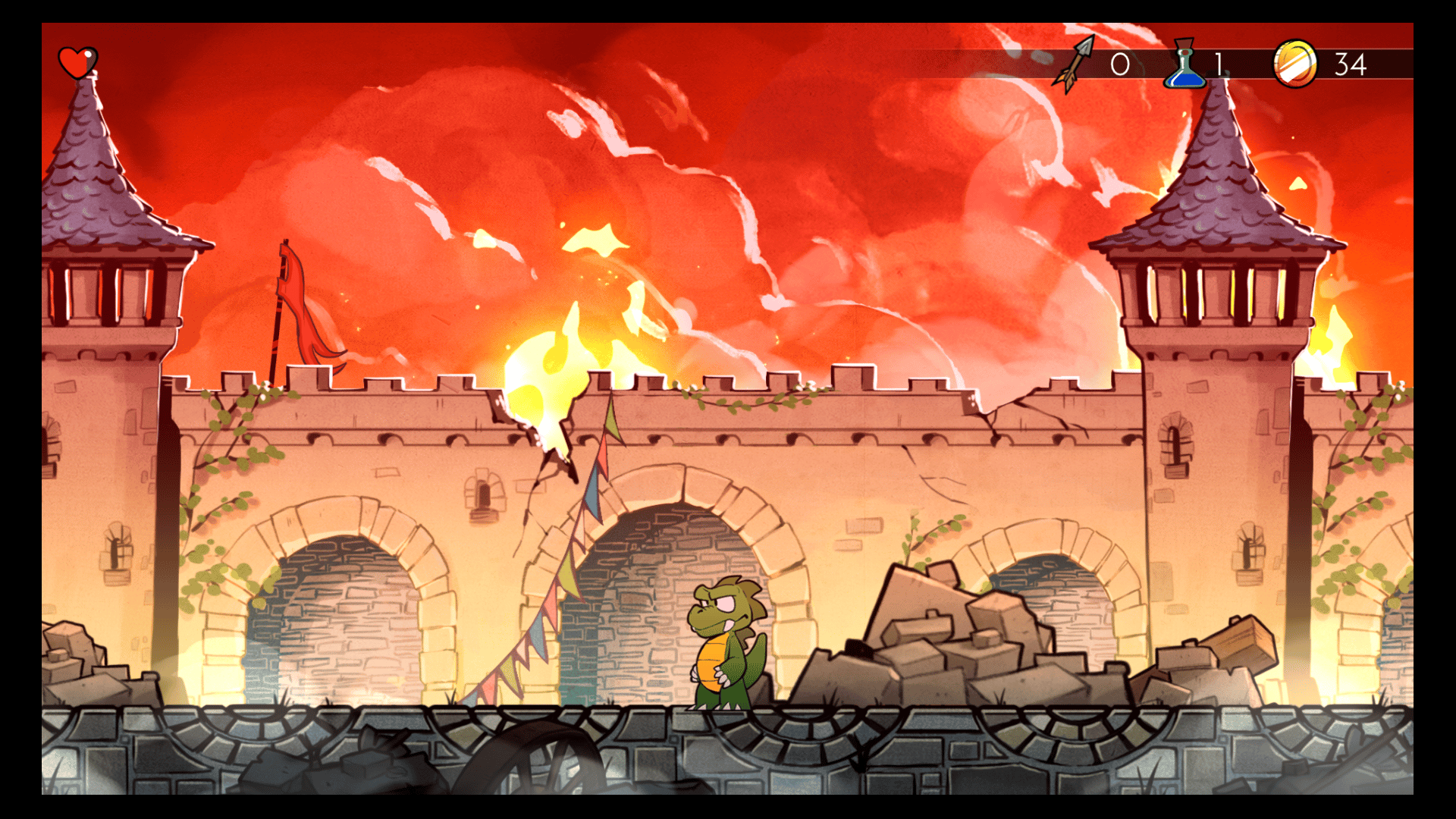 Here is the same location as above, i just hit L2 (on my controller settings) and it took less than a micro-millisecond to switch all the graphics into this awesome looking stuff.

The gameplay and movement and so on are intact and exactly the same in both graphical modes and i have to admit that i never expected such a fluid gameplay in both versions really, what a fabulous job they have done here.

So is it just a re-skinning? 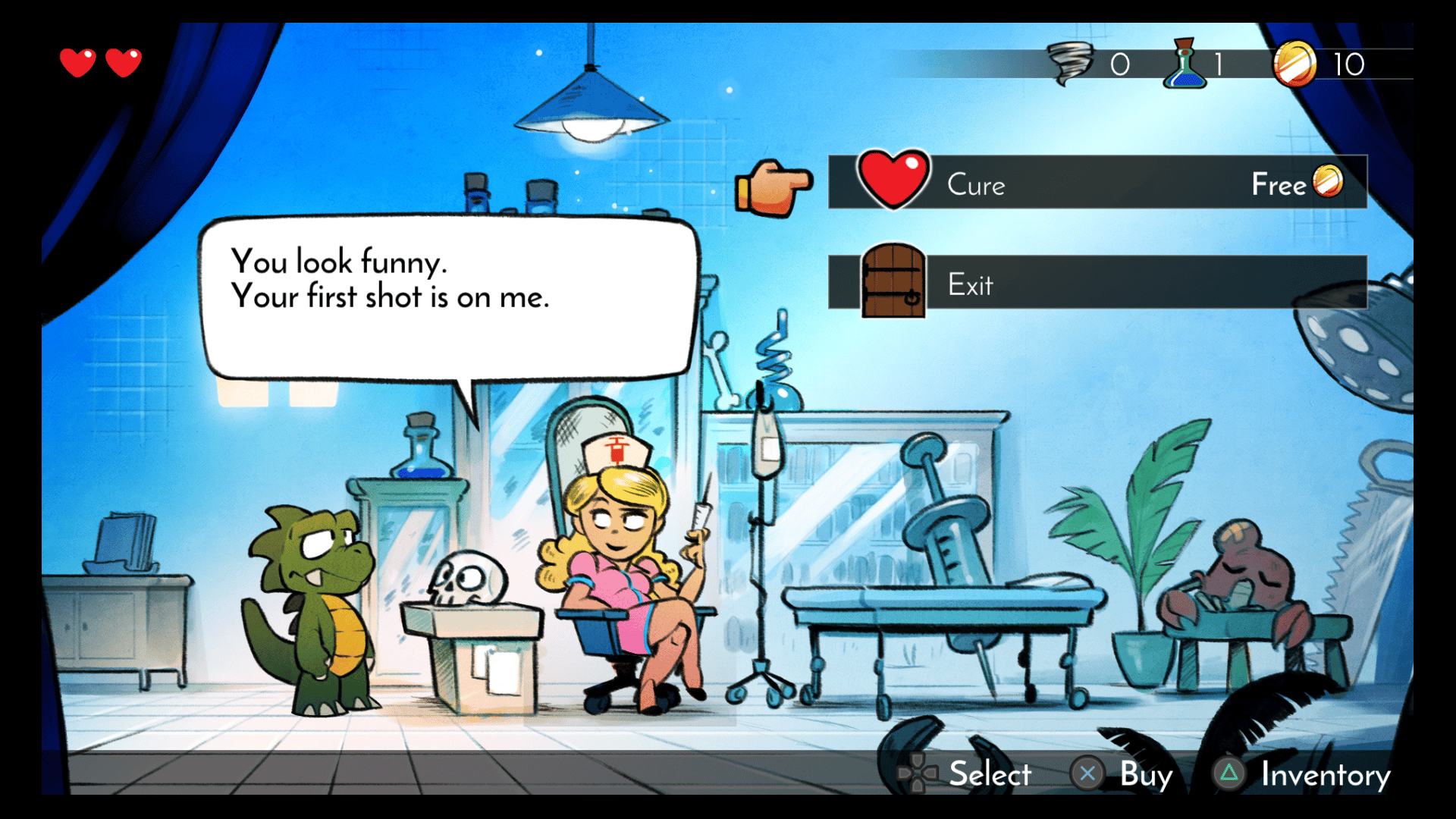 When i got to this place i was like, hey… i gotta check this one out in the 8bit mode.

I know i remembered how it all looked in the past but for some reason, i just kept flicking that L2 switch all the bloody time that i played the game. 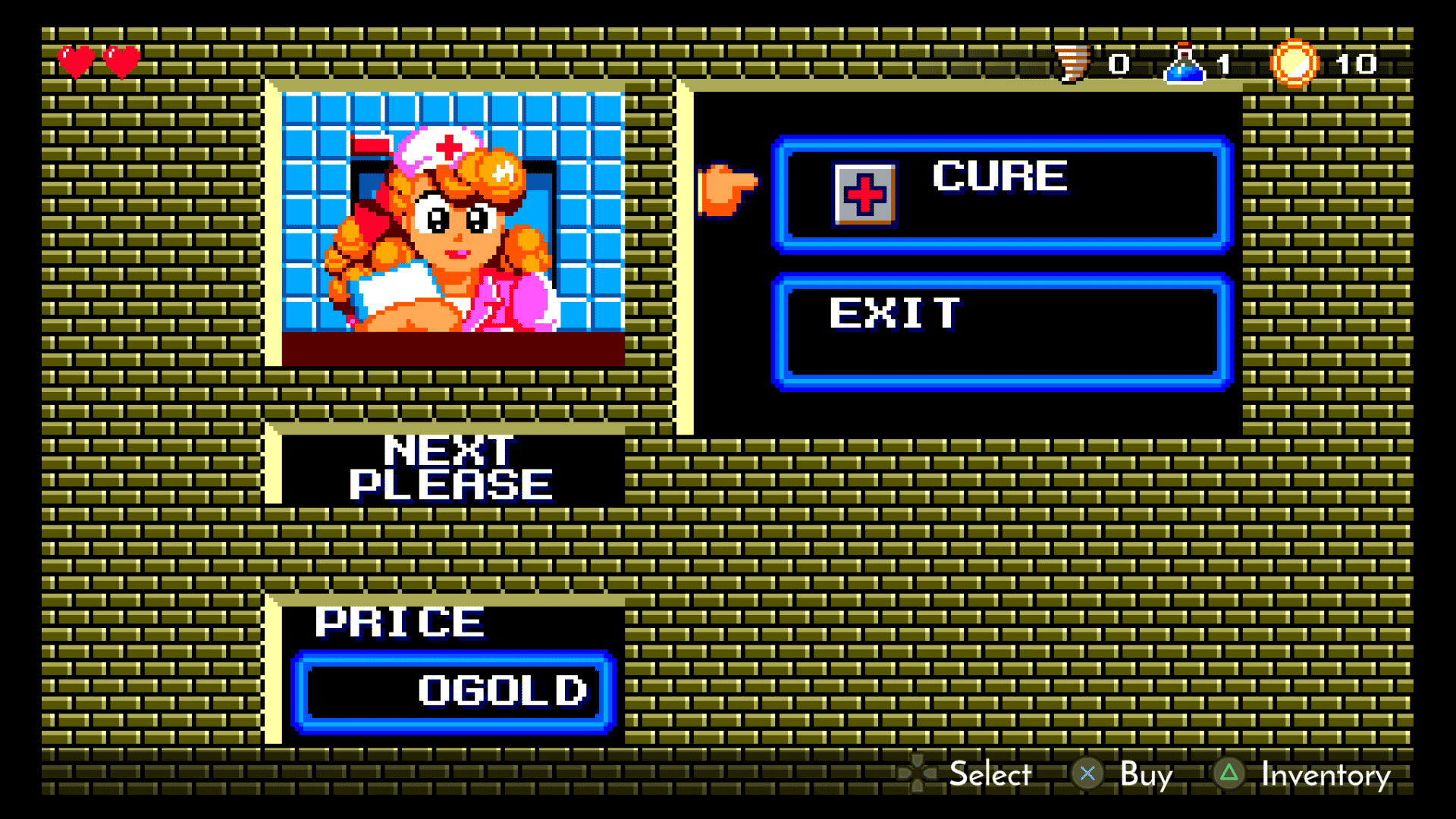 Yup this is how the nurse looked like in the original game, the style is like burnt into my iris but yet i had to check in this new version.

I love the old graphics style, but i have to admit that the new style is even better as it just works wonders with animations and style. 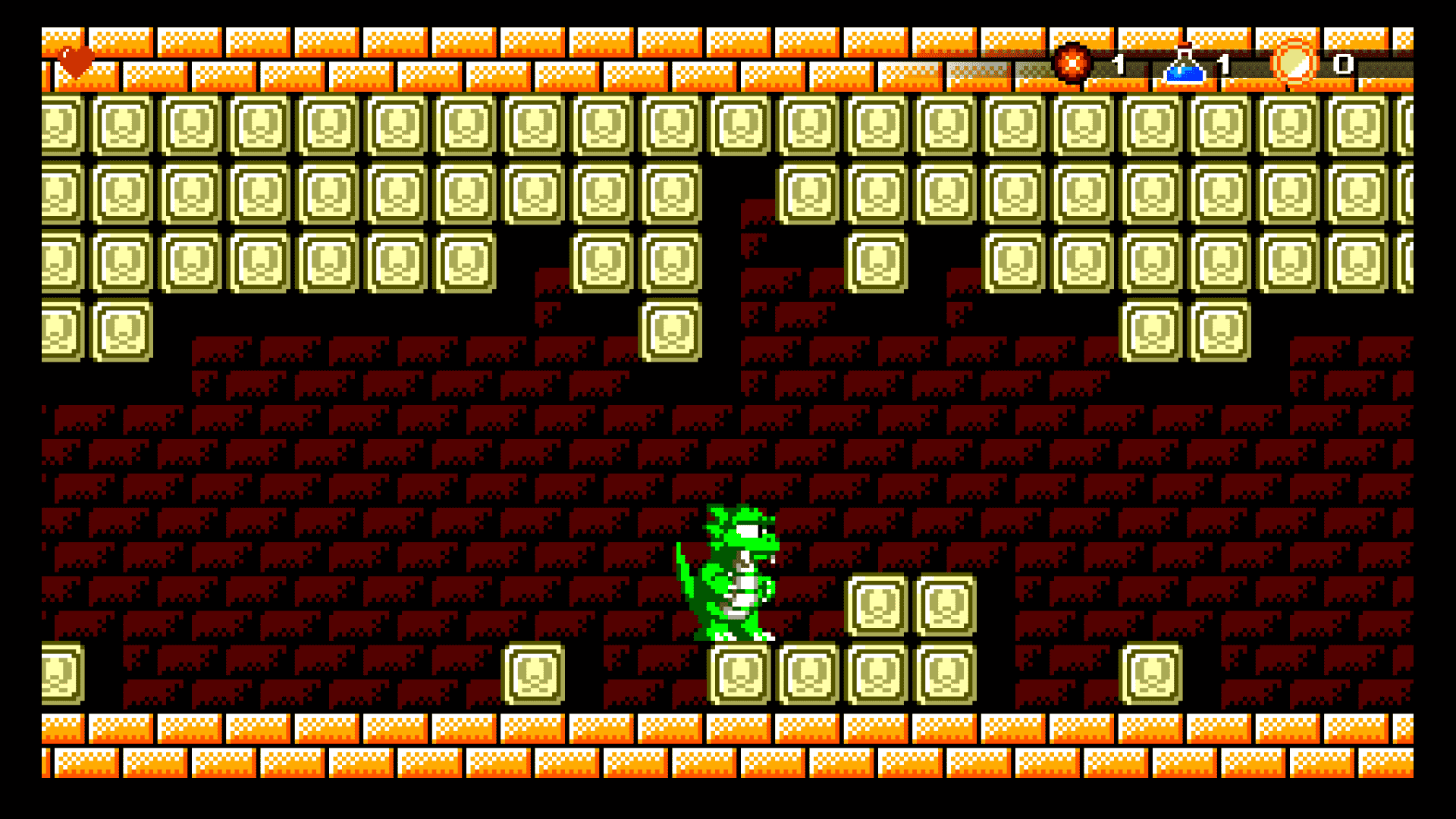 For some reason i only did dragon shots in retro mode, i thought i had lots of others too but these will do for the comparing between the 8bit and the new style.

The original game was and will always be one of the best games of the 80s, the style and gameplay were way ahead of its time and i won’t ever speak badly of that,. 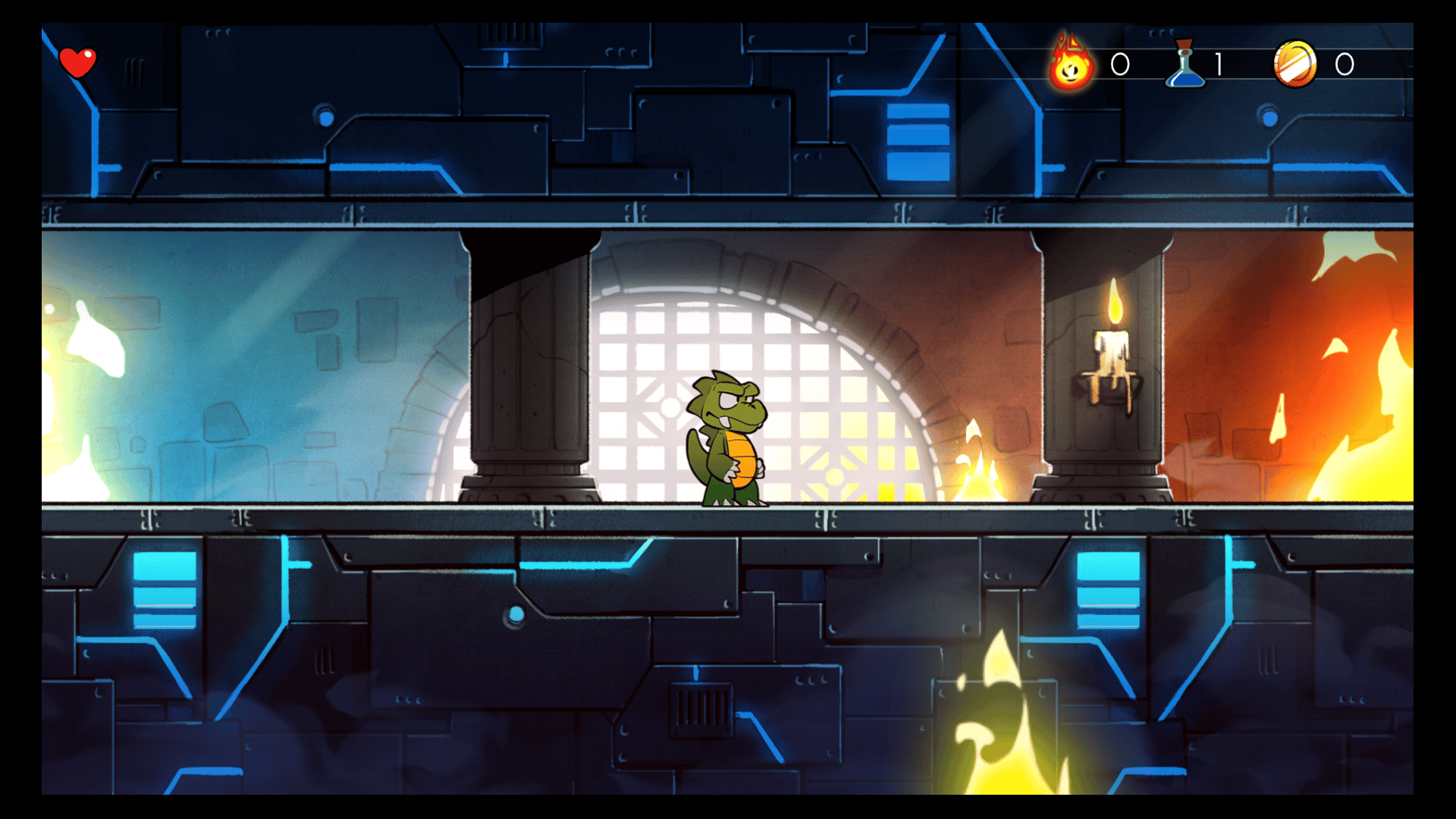 This is how the shot above looks like in the new version, the boxes are missing indeed, but the way it’s moving and the attention to detail is just fantastic, it is almost like if they wanted to prove something with the style.

Ok, let’s look a bit closer on the new version only. 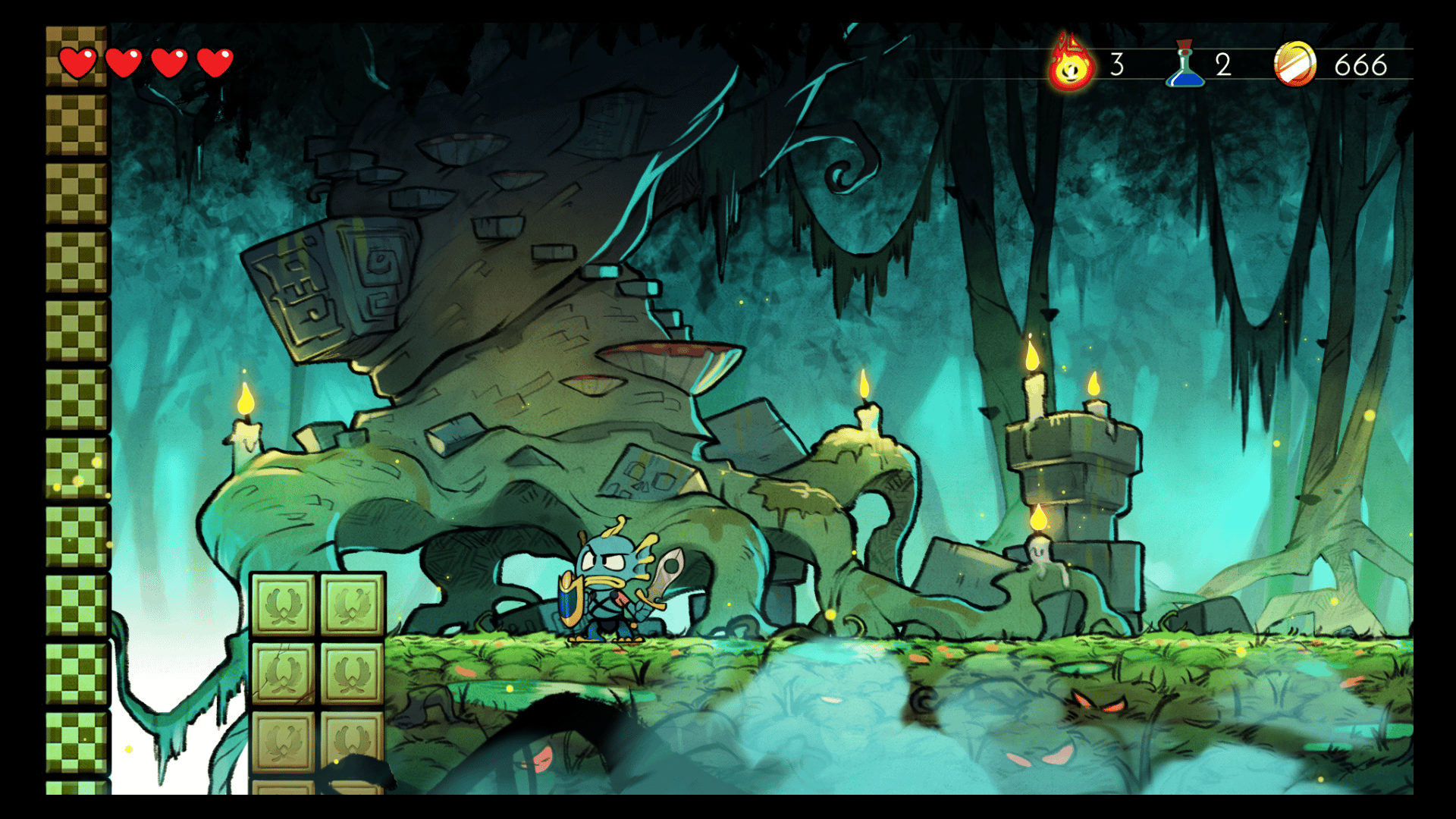 The graphics in WonderBoyGirl is very varied, to say the least, the more i played it the more i wanted to see all of it, the various gameplay mechanics offered by the various characters you unlock helps to make it even more intriguing. 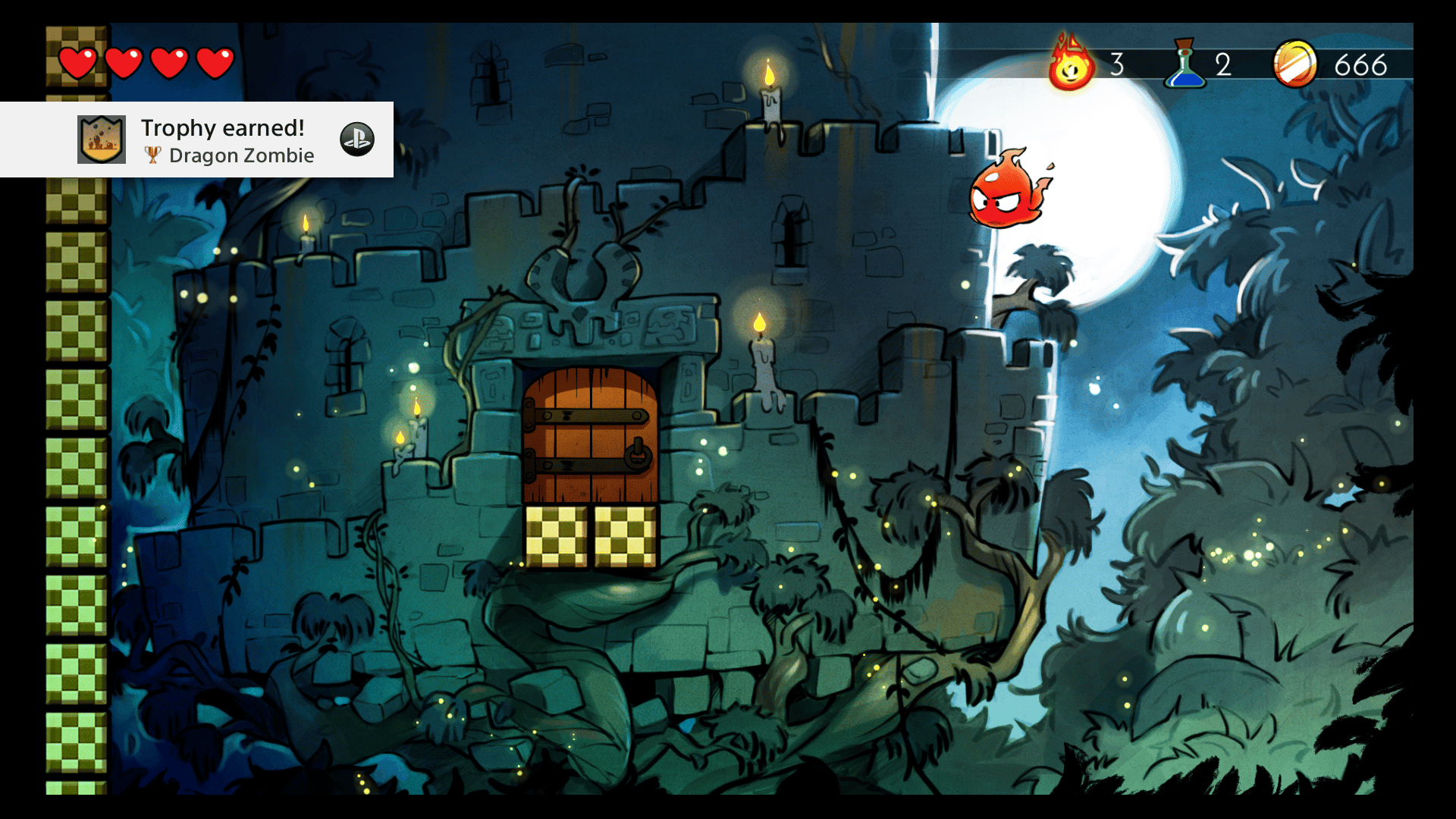 Just had to include this one, it is from exactly the same location as above but only one frame/level above it. Imagine if games had looked like this back in the 80/90s…

By the way, this is a boss door.  you climb up being a mouse and once you beat the boss you turn into a new creature (this time it was lizard thing creature whom can breathe underwater(?)). 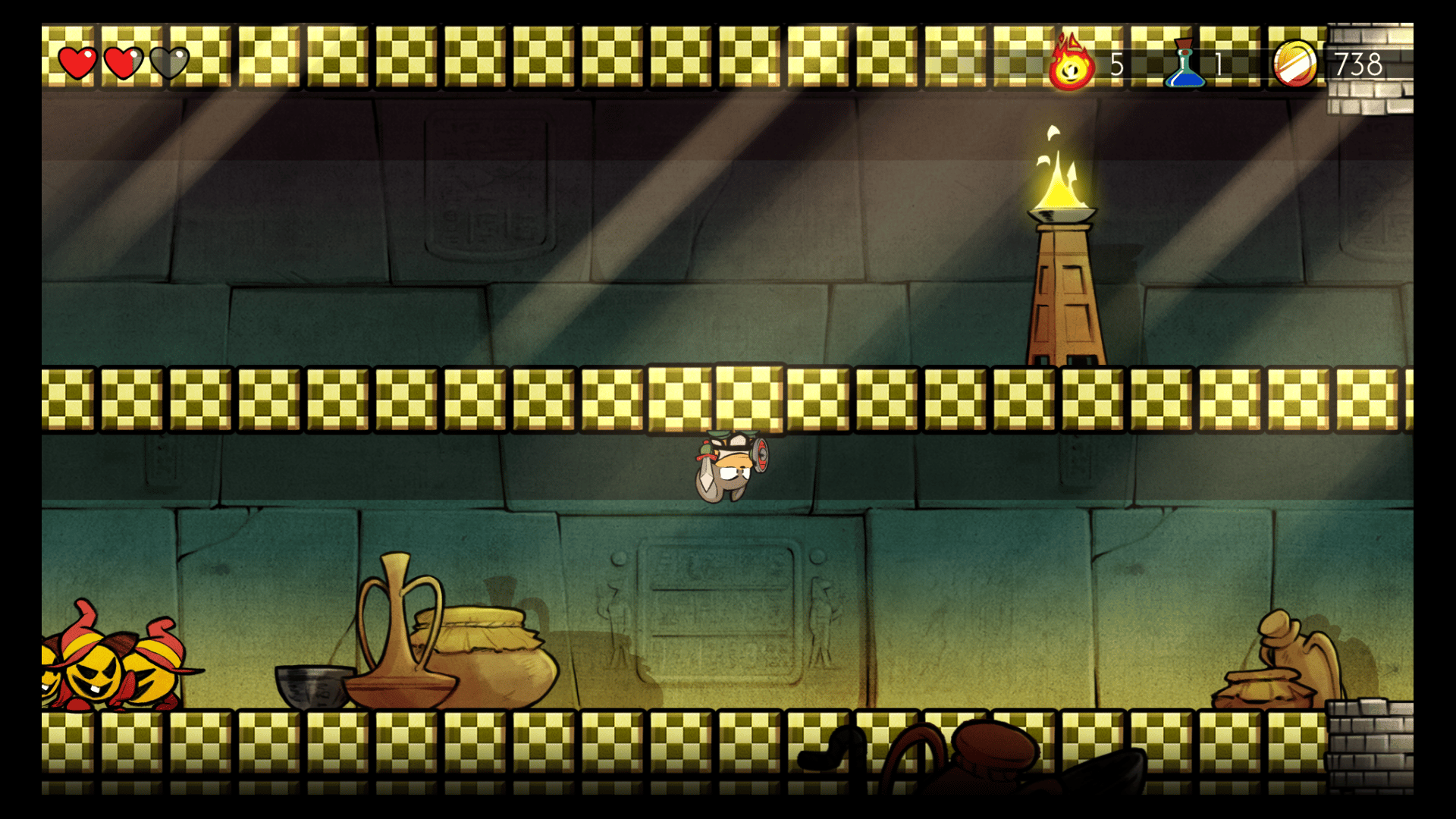 The pictures are mixed and tossed around here a bit, but here you can see the mouse in action, he/she/it can climb walls, upside down and so on and this is one of the gameplay mechanics of the game that really works wonders.

The mechanics work basically like this, you get to a boss and unlock a new character to be able to progress to the next boss, you can change the character if you want to but this can only be done in the hometown/*starting point – a hub of some sort.

If you change to something else then you most likely will hit an obstacle that will block your path to the next boss as the whole point of the game is to play it with the given character and so on. 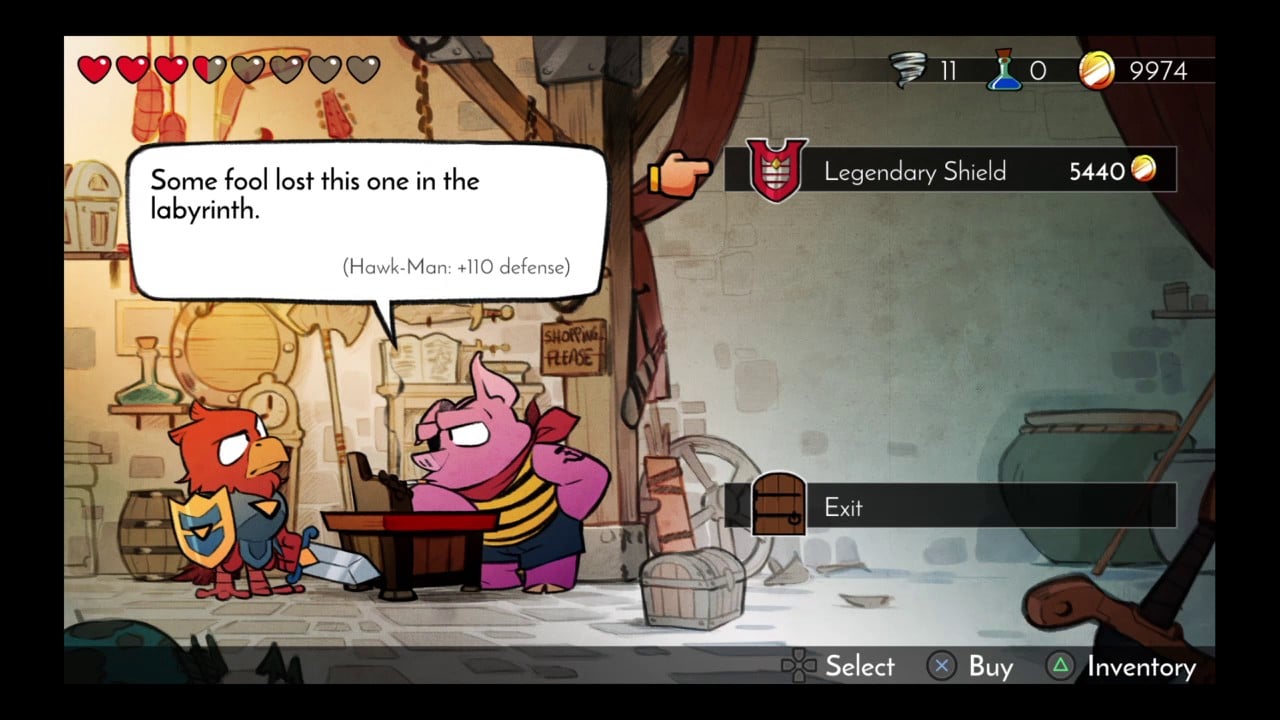 The game offer upgrades of various kind, weapons, shields and so on. These type of shops are spread out in the game although most of them are in the hub or right before a boss fight or such.   Potions and life upgrades and such are often possible to buy before a boss fight if you can find the location.

This type of gameplay wasn’t standard back in the 80’s really, i know this system was also in Super Wonderboy in Monsterland on the Amiga, but i really do not know when or which game it was that had this type of gameplay first (not thinking about WonderBoy only here, i mean generally speaking).

I will leave the PS4 trailer here, it shows some spoilers but it is a well-made trailer and worthwhile your time if you’re interested in getting the game.

So, that’s it then i guess?

The trailer shows a lot of stuff that i have not seen as i am kinda stuck at the moment, yes it is not a hard game but i somewhat got stuck and took a small break which has turned into 2 weeks now.  I will pick up the game again tonight for sure.

There is one thing that i haven’t talked about yet and that is the music and sound fx, i have no preferences here really but a friend of mine (hello Erik) loves the original music and play the game with remake graphics.  So yes, you can mix old and new in the settings as you wish which is a huge plus.

I had to check around a bit with Erik if my gut feeling was correct with this game, i knew he had played the original a lot so i decided to ask a lot of questions about his experience of the game and he more or less said the same things that i was thinking about,  the only negative thing he came up with was that the boss battles were still very bland and that not much (if anything) was changed throughout the game.

So, in the end, this is not a remake but more of a re-skinning by the looks of things, all the good stuff is still in here and not much has been changed either, but in the end, it’s all turned into a brilliant retro title in 2017.  A proper must-have-title with amazingly clean and smooth graphics, the bleep’s and bloop’s of the 80s is still here too, but the new sound is also pretty good too.

PS: How about a remake of WonderBoy III Monster Lair now?

Follow Us... Inspire Us To Get Better... Keep The Flame Alive
A Look At Dark Souls III Collectors Edition A Dream Come True – Going To Japan – Part 1