This beauty of a thing ain’t new indeed but i forgot to write about it when i got it last April. I have been like waiting for an excuse to finally do a little article about it actually, the newly released DLC and an announcement of the GOTY edition is as good as it gets i guess. 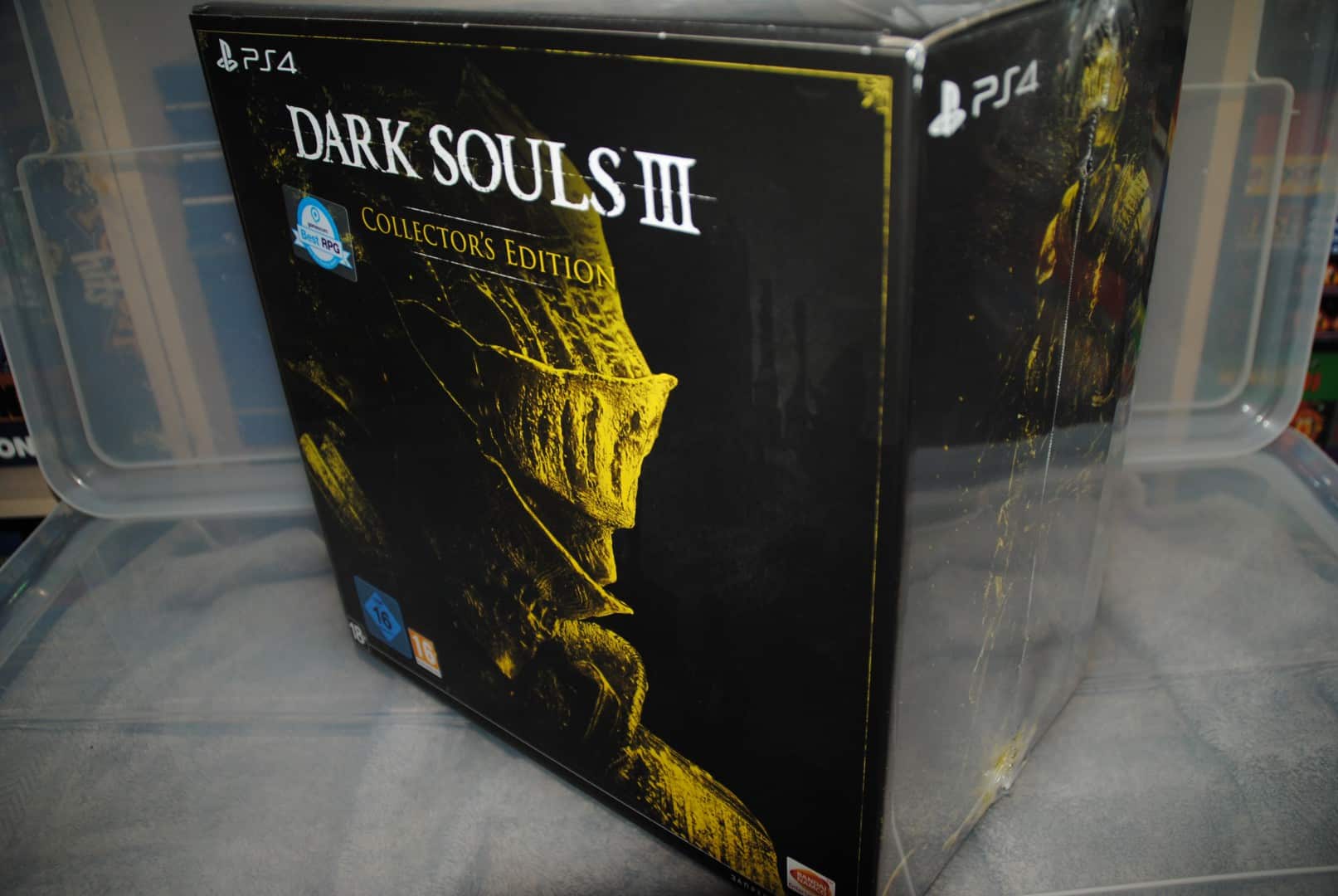 The Dark Souls III Collector’s Edition box looks pretty darn good, its box design is simple and flashy with a lot of small details that you won’t notice at first but once you do, well it certainly won’t make you like it any less. 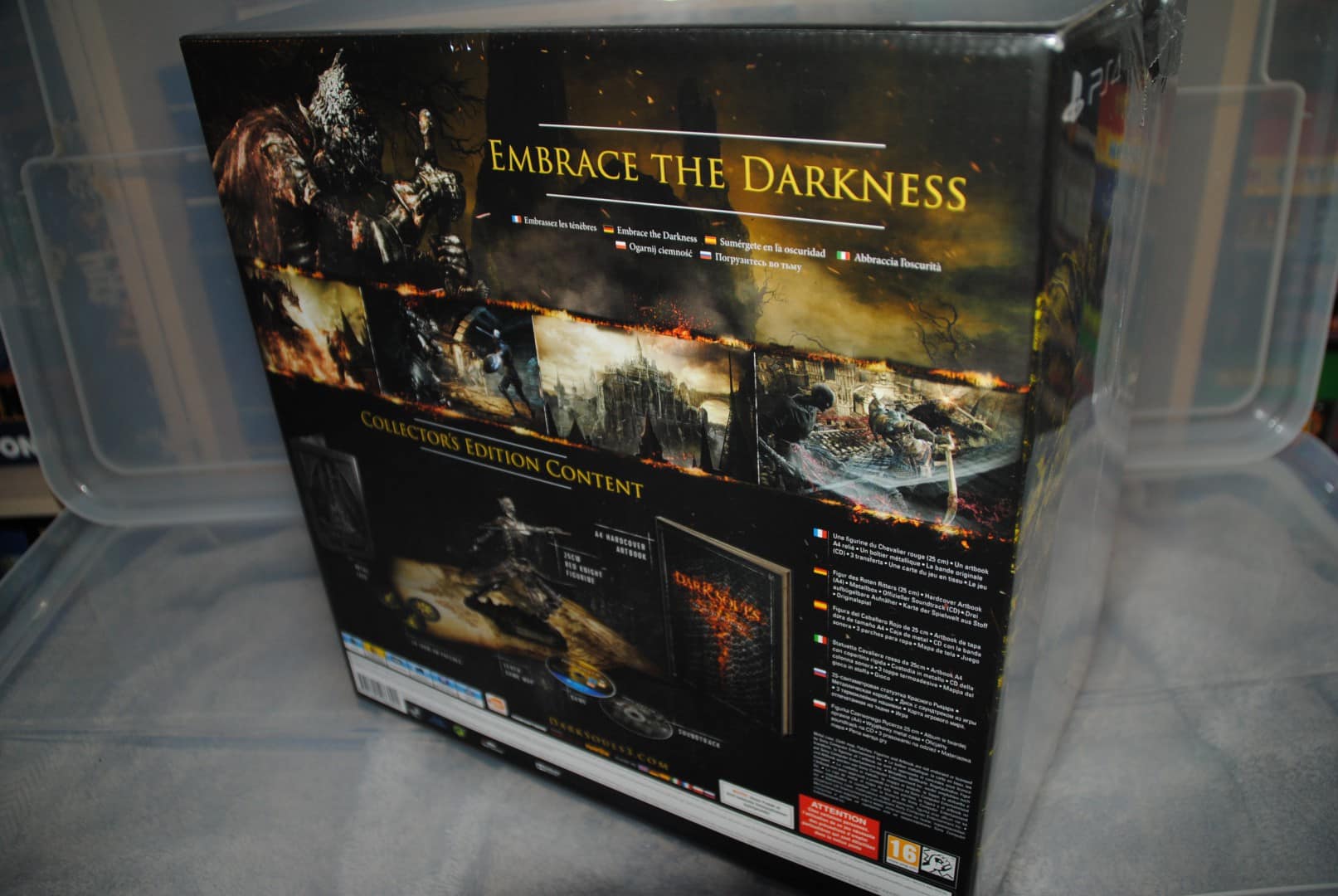 The backside of the box carries a much heavier design, it looks pretty good and all but the clean look is gone here and it is almost like if it was a totally different box.

The size of the box makes it hard to do proper pictures of it, at least 1 shot pictures. I guess they will do for now. 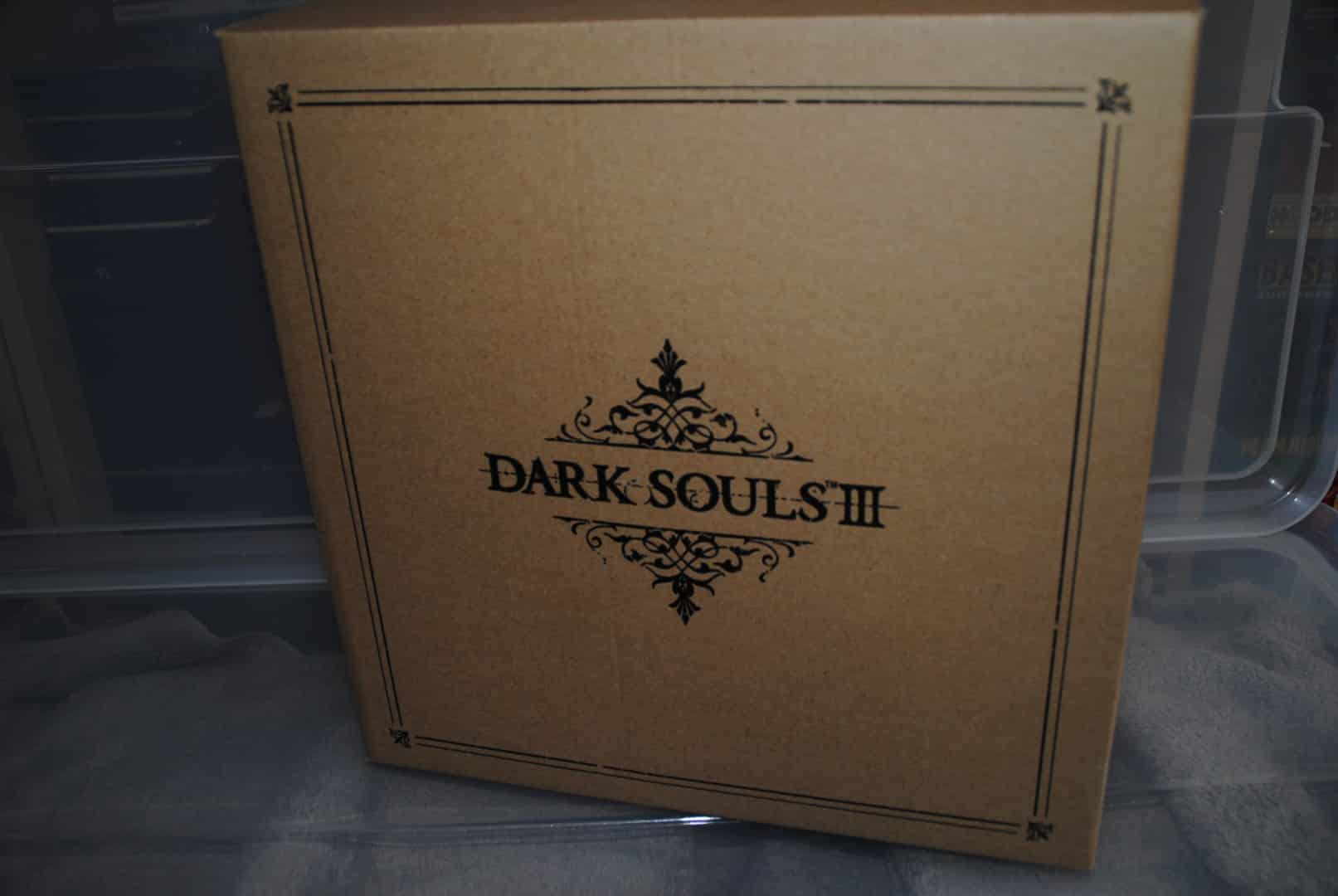 Inside the box is another box, this time a standard cardboard box with a Dark souls III logo and emblem on it.  Very slick and effective for such a limited look.  Have to love when they go the extra mile to make these Collector items more collectable.

Such a huge box means that there’s something huge inside too right? 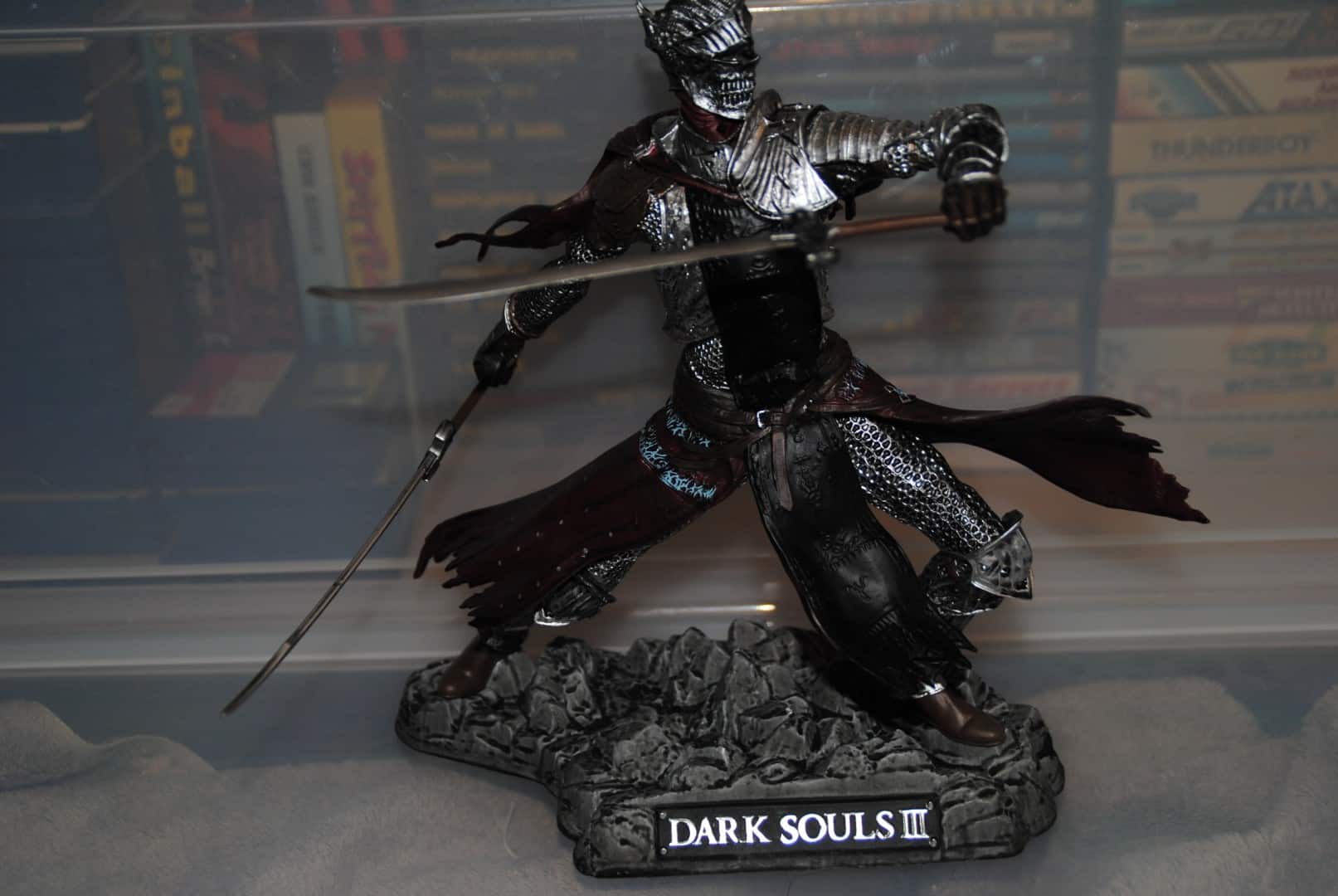 Yup, look at this gigantic figurine. The size of it makes many of today’s C.E figurines look like miniatures.

The details, style and look of it scream “SHELF CENTERPIECE” out loud, it is scary, cool and magnificent at the same time.

The attention to detail is impeccable, it is almost like if the god damned thing is real.

The only thing that makes this one not real is, of course, the swords, they ain’t sharp sadly.

As many of my readers know by now ,i normally never unpack my stuff unless it is for a photo session or such and that most if not everything sit in their boxes forever after, well this is one of those items that i really want to put on display in an unboxed state, sadly that won’t happen anytime soon due to space constraints. 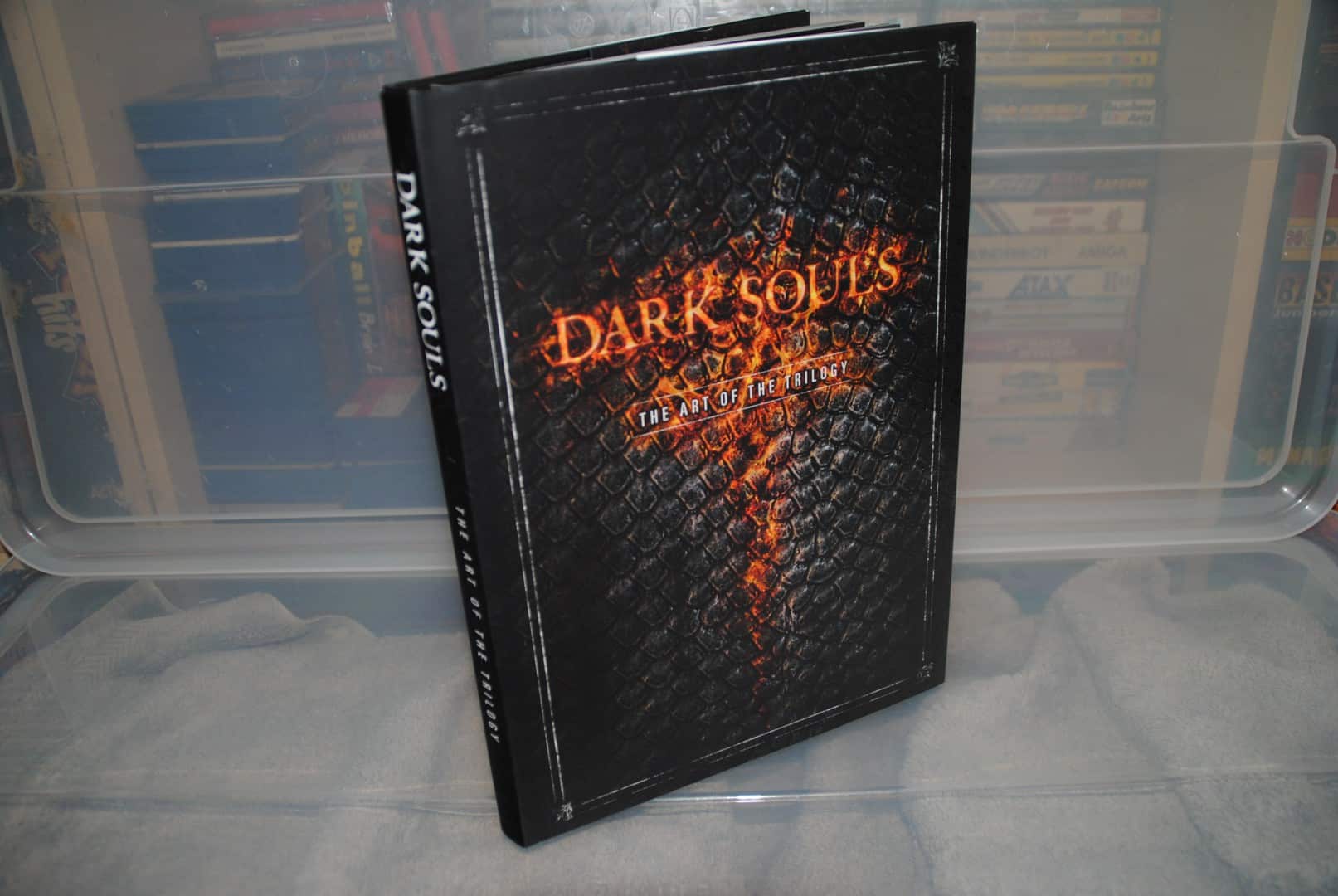 A Hardback artbook! , None of the C.E artbooks for the SOULS games have been bad until i saw this one.

This art book covers the whole trilogy for some reason, it looks and feels like a proper book with hundreds(!) of pages and if i have understood some rants on the internet, a much better artbook than the one released in USA and ASIA. – I like this hardback artbook quite a lot actually.

The book covers quite a few things pretty good although if there is one thing that is missing in it then it has to be locations and environments, yes there are some indeed present in the book but nothing like the amount one would expect from a game with such a distinctive look as a Dark Souls game. 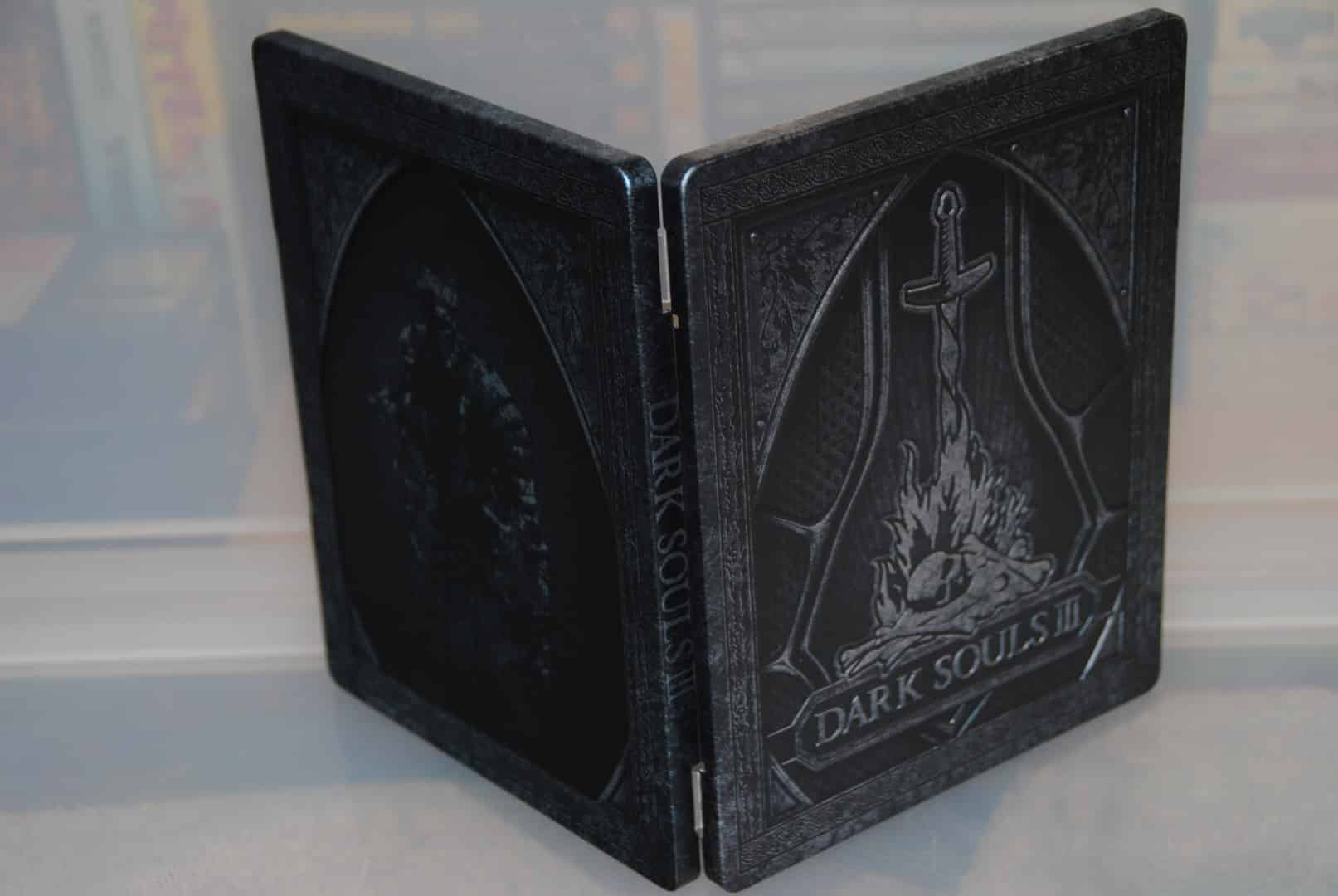 Here is yet another special item, the steelbook. It’s heavily embossed and very detailed for a steelbook really looks incredible.

The reason why i haven’t done better pictures is due to the flexibility of the cover, i really didn’t want to put too much of a strain on it, it is not like if it is about to snap or anything but it just felt very wrong when i tried to open it more.

I might be able to do a better picture now since i have actually used the box a bit, might be more flexible now… 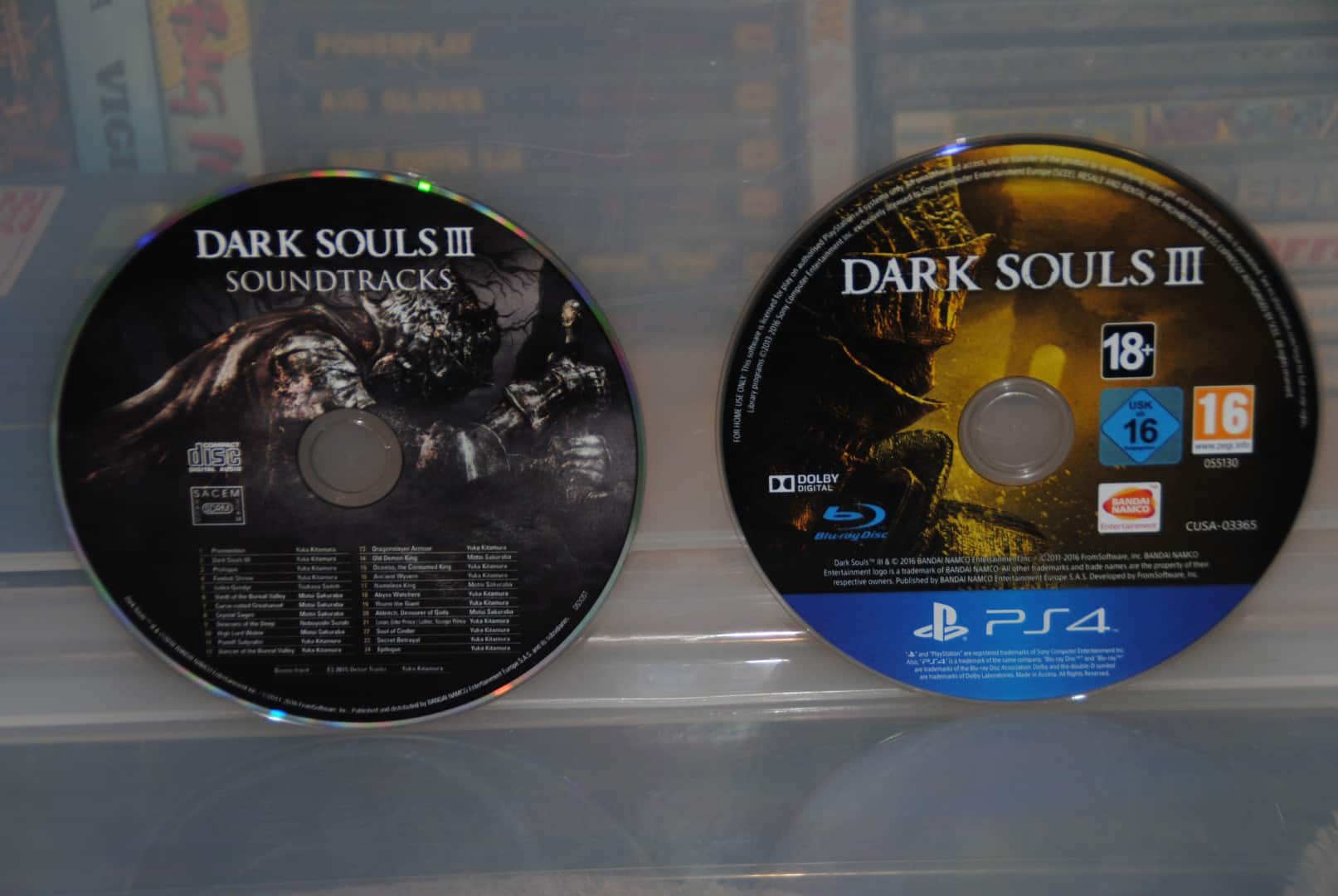 There’s a soundtrack CD too included in the box, and while i can’t say that i remember much of the music in the game i still have to say that it was never annoying or anything and i guess i should fire up the cd and “hear” closer…. would have been perfect to do that while writing this article i guess…

The game disc is awfully boring looking, i mean… it looks like if they just took some art and put on it, yes i know it is from the box design and all but it just doesn’t work on the disc at all. 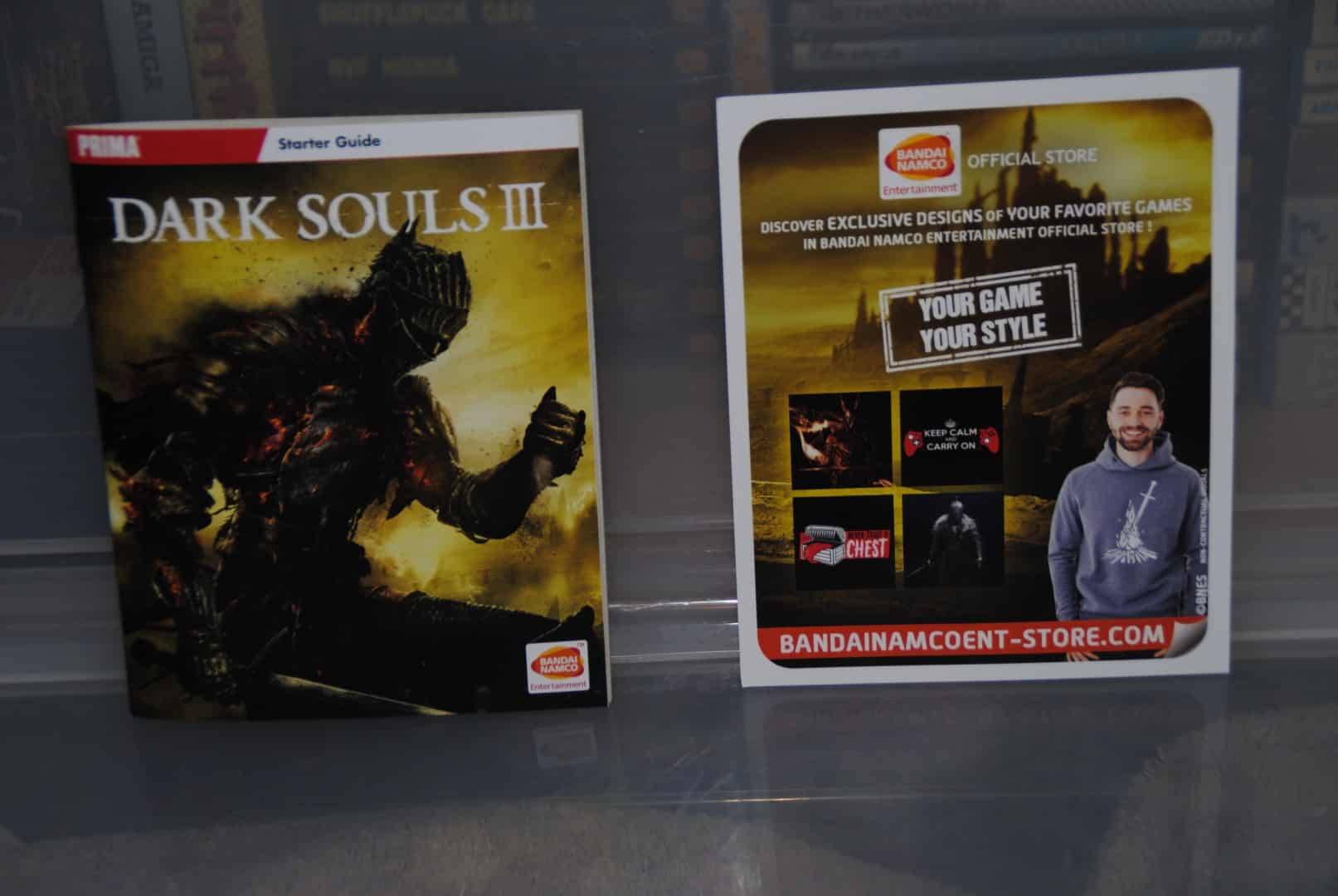 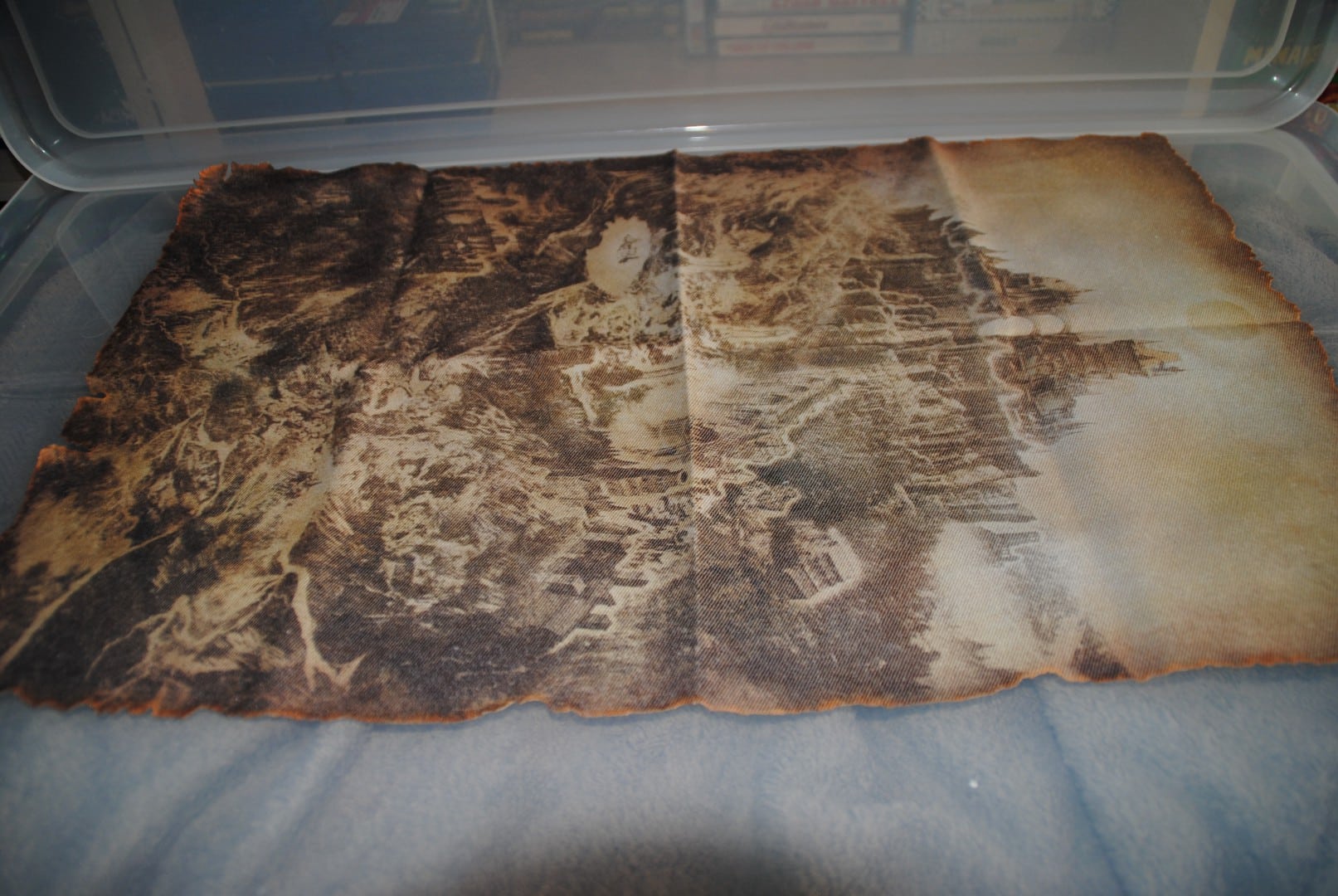 A pretty cool cloth is also part of the C.E, it feels very – very delicate and like if it was about to fall apart just by looking at it, well it only feels like that really. I won’t use this for anything else than gaze at it and dream about it all…  – well, it is definitely a proper cool item. 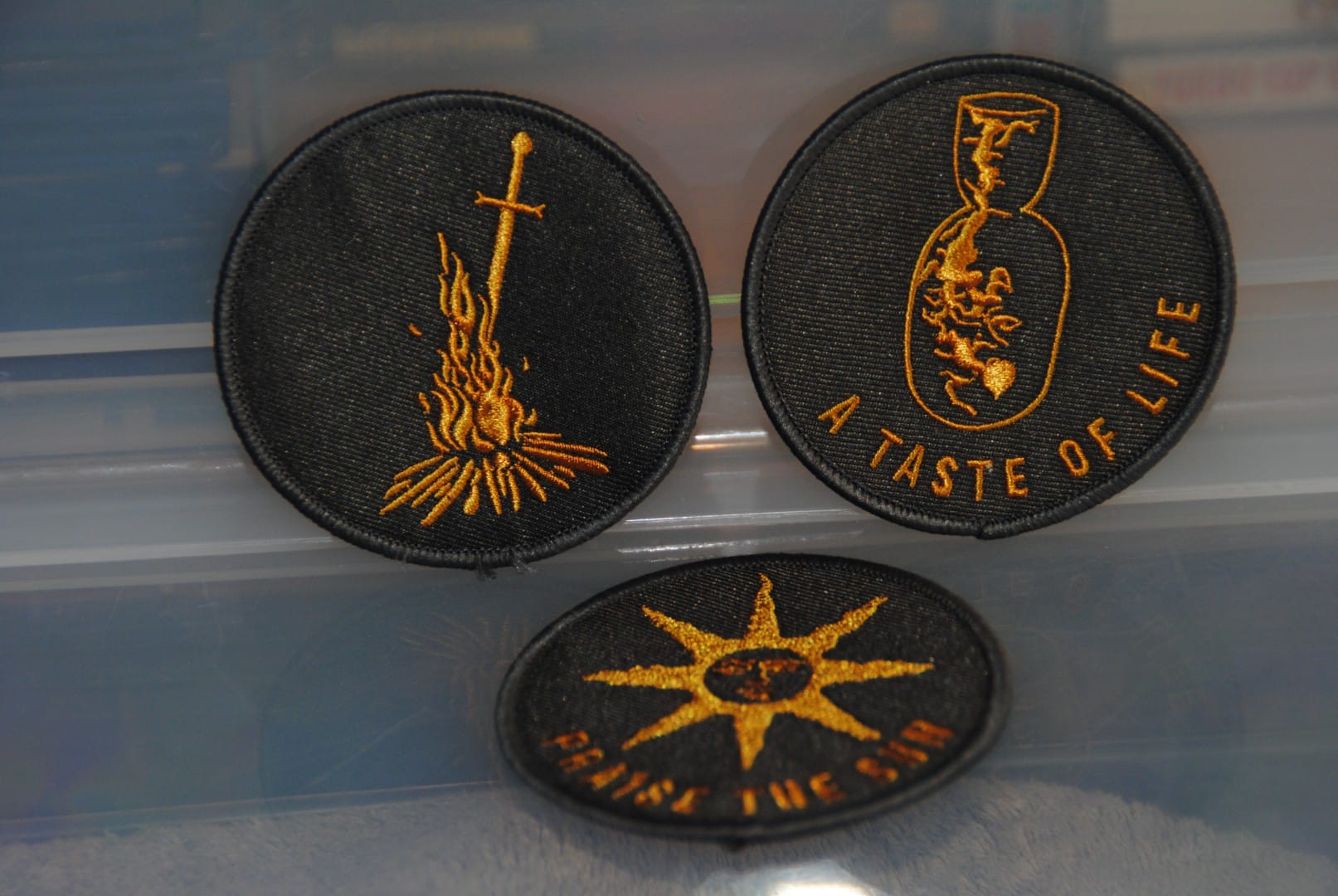 Patches!, iron patches actually, who the hell use these things anyway? i mean… I had a jacket back in the 80’s which screamed for these iron patches thingies, but as for today, nope i have no idea what to do or even what to wear it together with.

Ok, enough of this.. that was the last item in the box actually… 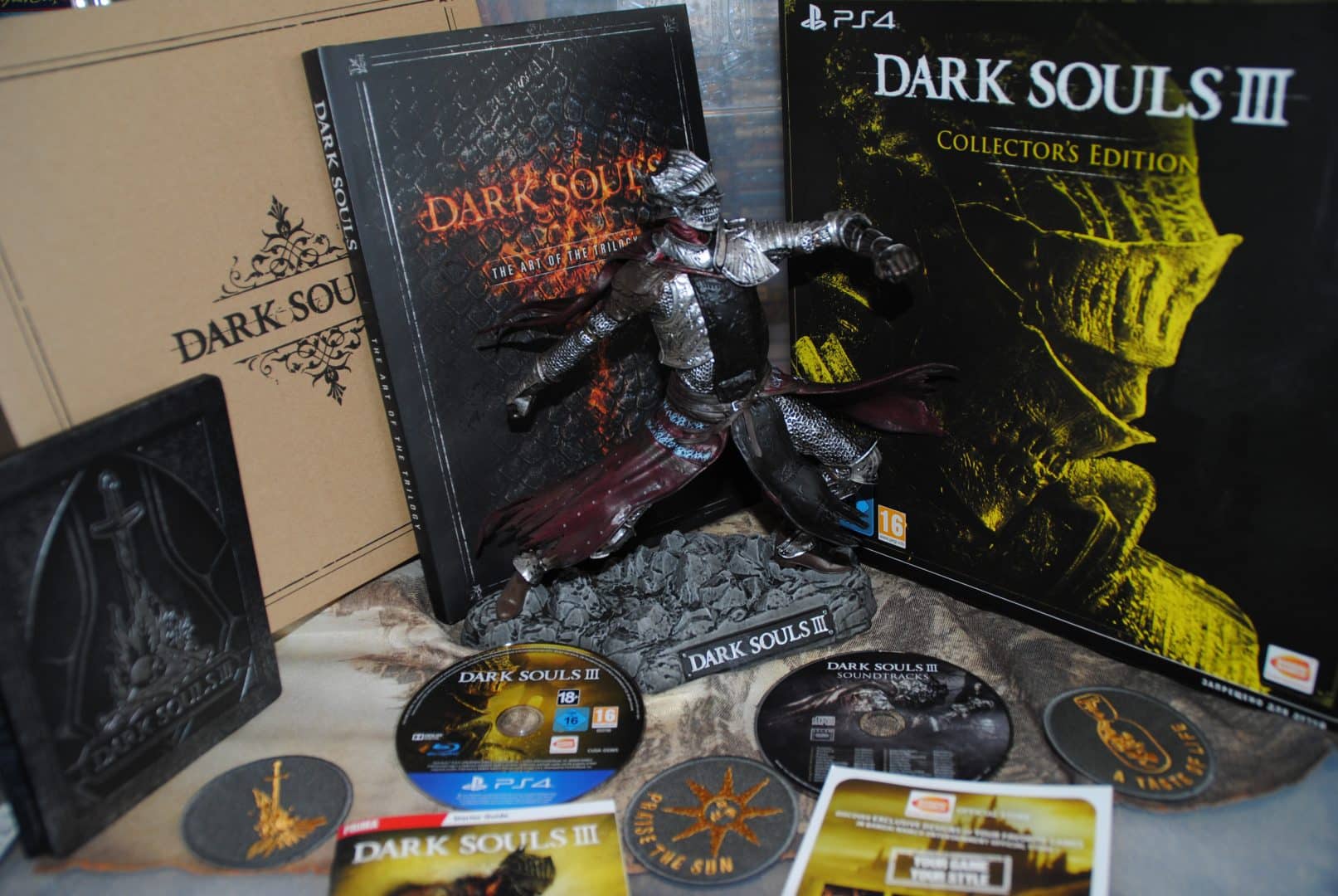 This collector’s edition is indeed one of the best ones i have seen for sure, i must add that there are even a better one out there too which is called the PRESTIGE edition which comes with two (yes 2!) figurines in the box, sadly it was only limited to Amazon and came only in an extremely limited run.

The best part of this Collector’s Edition has to be the Figurine, but the art book and the steelbook are also kick ass good and proper stuff for putting on display, the whole lot just felt perfect up until those iron patches popped up.

3 thoughts on “A Look At Dark Souls III Collectors Edition”