Yes, the blog here has been very dead lately but writer’s block and a downright boring life thanks to Diablo 3 ROS and working excessive amounts of overtime at work certainly haven’t helped my inspiration to write something amazing or fantastic …or actually… anything at all… 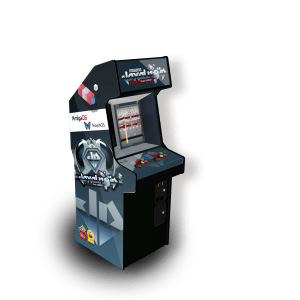 Don’t you just love those days when you just know something good is gonna happen? I had one of those a while ago and nothing good turned up or out or whatever… it was just the same old same old…SSDD… oh wait!, yeah there is actually a new Amiga game out (again) very soon now and I was the lucky one to get the exclusive reveal (*Cough*).
VoxelNoid is a new game from Cherry Darling (of VoxelBird Saga and Ace Of Hearts fame) and it is a “voxelization” of the old classic Bat and ball gameplay for instance shown in Pong or the latter incarnations like Arkanoid or Breakout.

The Design and attention to detail are spot-on just like they have been in the other games from Cherry Darling so far, Graphics, sound, and general design choices show how much these guys have cared for the little things as well as the big things. 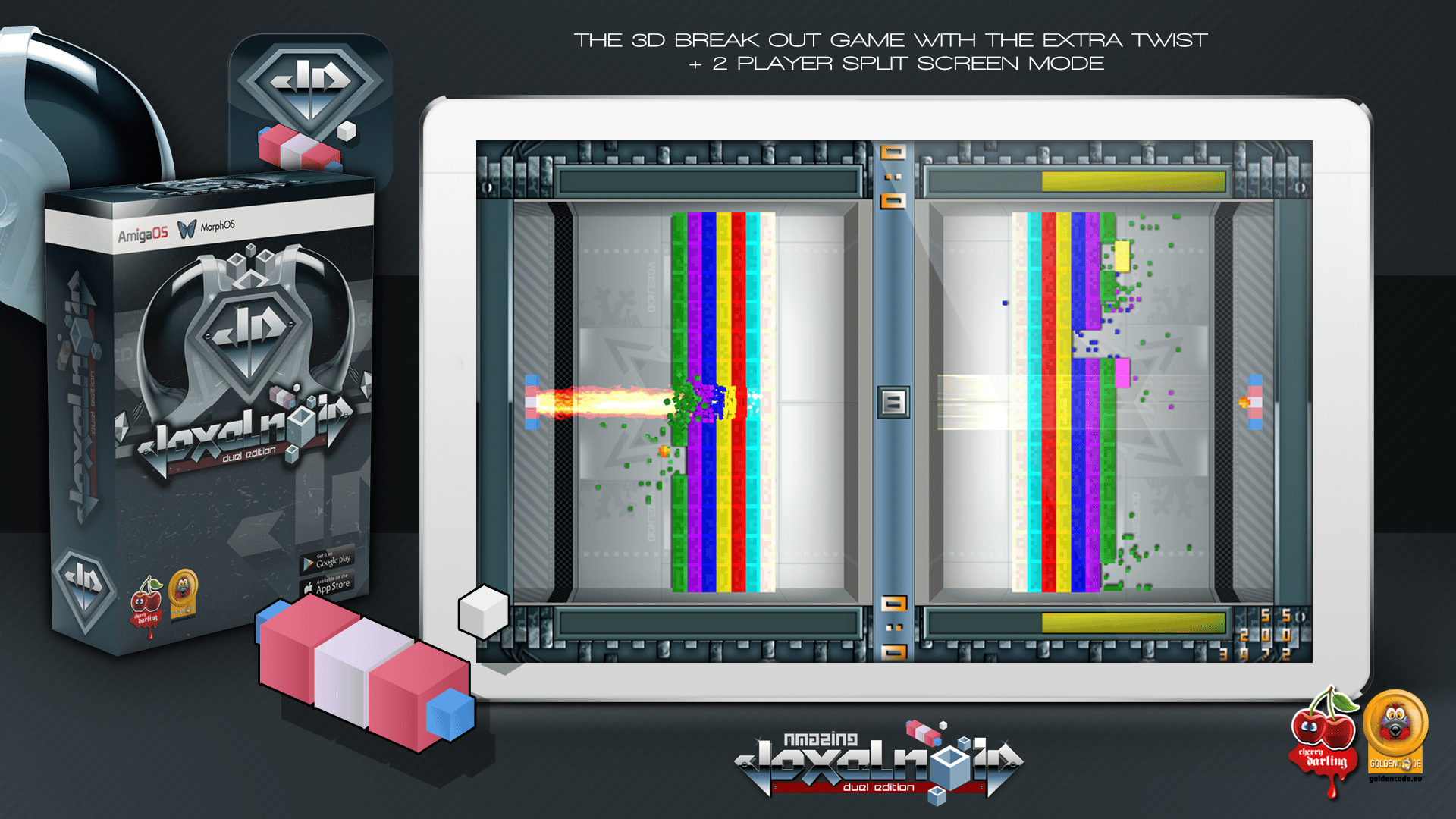 You have never seen a breakout clone like this before now have you? there are some nice twists in here in regards to gameplay but overall this is just a very small game with some very nice use of voxels and of course graphics. There are blocks to destroy and when you do so then it drops bits and pieces of voxels to get those you will have to shoot your ball over them and then they will glide down in a nice-looking effect towards the “bat”.

The voxel bits turn into firepower which you can use to shoot a large laser thing’o’mo’bob to take out more blocks, works well too but at first, it feels way overpowered but after a few levels, you realize that this is incorrect…

I made a small Video here, enjoy…

There are the same options as in all other Cherry Darling games, you know… Cherry ID which brings stuff like Achievements and Online Highscore tables, Detail strength, various game difficulties, fullscreen and window mode, and so on… 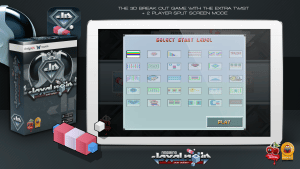 Not much more to say about this really as I am sure most of you guys have tried at least 1 of the other Cherry Darling games by now?…. if not… WHY NOT?.

Ok so here is a nice twist, old-schoolers might remember a game called Krakout on the C64?, well there was a feature in that game along with another c64 game that I can’t remember the name of anymore… (ultimate breakout?) and that is a Horizontal game field and even better…a 2 player horizontal game field… bat and ball! forget about the physics! as this is where the game will shine the most and while I have only tried it very little one of the developers “Daniel” reassured me that this is where you get your money’s worth.. (it is a figure of speech !, the game is still free yes! (AMIGA!))So it is basically a very tried formula but thanks to great music and graphics it turns into something rather special in this day and age of the Amiga software market.

Some actual developer info here, The first Voxel game: Amazing Voxel Bird Saga had a “slower” fps/feel on the Amiga compared to other formats releases and this was down to the MiniGL as it is still incomplete and quite messy as it stands today so after the release of that game Daniel and me started doing some crazy amounts of testing and haxx0ring to get the speed and quality up and over a few days or so Amazing Voxel Bird Saga went from 20 below fps to 30+ fps and this was thanks to getting rid of MiniGL… (Quote: By dropping MiniGL in favor of using Warp3D with manually transformed vertices the rendering-performance was doubled and the MiniGL related drawing errors (especially triangles with wrong colors at the edges) are gone). 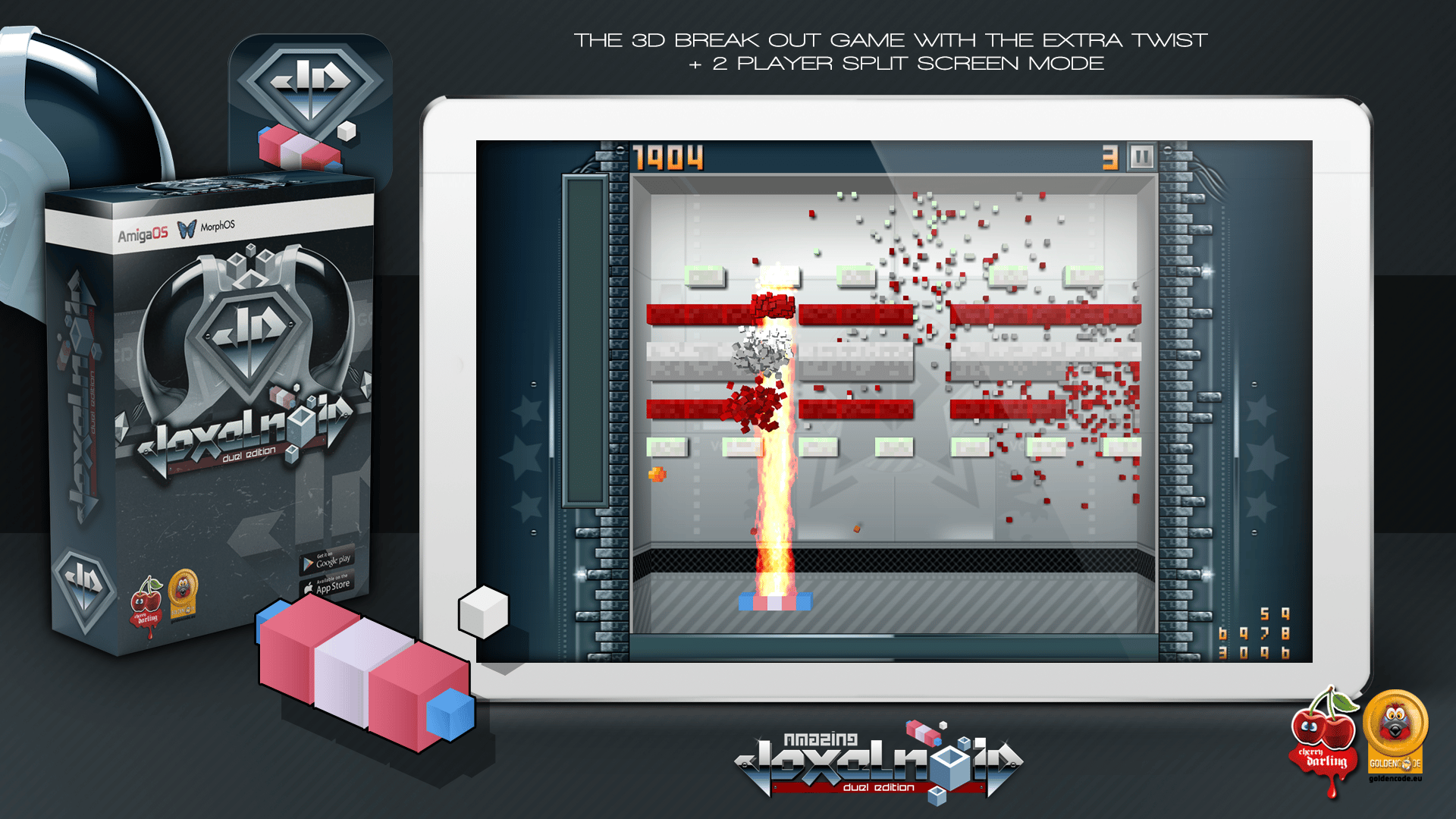 The new Amazing Voxelbird Saga version is not yet released but it will be soon enough for sure the good thing in all of this is of course that what was learned while building that game was of course used in this game ” VoxelNoid” so that basically means, great fps! and no flickering, etc.

Edit: For more info about Cherry Darling and their other games you can go here and if you want you can then grab the new non-MiniGL version of Amazing Voxel Bird Saga too since that one is actually released so give it a try as the speed increase is major!.

Edit 2: Fixed a few links and changed the 2-player video as well as the 2-player picture as there was a clipping error in them and the bug is now removed, I decided to do a version of how it looks after the bugfix.

If you want to read what I thought of the other Cherry Darling games then have a look here: Amazing Voxel Bird Saga and Ace Of Hearts.