Soldner-X: Himmelsturmer Started off as a PC game but it eventually came out on the PlayStation 3, sales went through the roof so its sequel Soldner-X 2: Final Prototype went on to be a Console exclusive, A Vita version was also released (not cross-buy though) and to top that off they even went out and did a new Vita version (two actually, one from Play-Asia and one from Limited Run) of it a few years after that, with a new trophy list (with a much deserved Platinum trophy) and the DLC among other things. 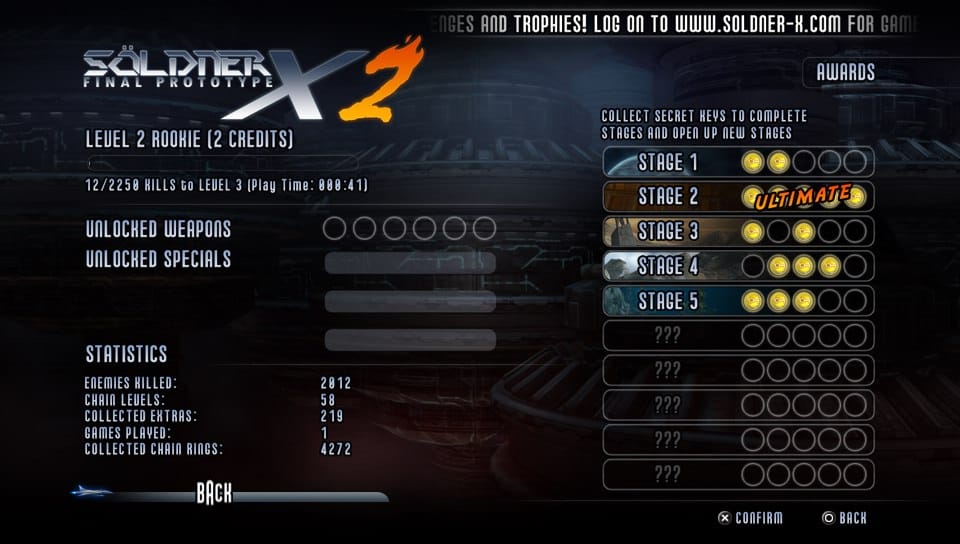 Little did we know that this would be the last we would see of the series, it seems the developer SideQuest Studios have been too busy with their turn-based hit series Rainbow Moon/Skies to even mention anything about a new Soldner-X game.

So, what happened? – Did the sequel flop hard?

Soldner-X had style and difficulty as its main goal and it was one for the true hardcore shoot ’em up fan, the sequel was more of the same albeit also more one for everyone and not just for the hardcore players out there, it was both casual and hardcore at the same time really… If that even makes sense. 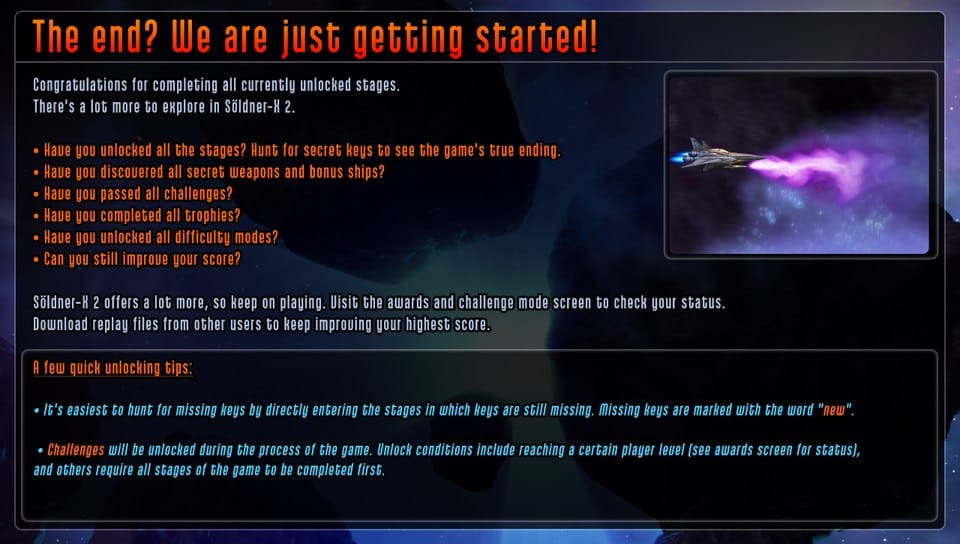 Both games came with a rather brilliant progress system which made you play the game a bit different to other typical horizontal shooters, yes it is indeed all about killing enemies but if you want to see the whole game then you also need to focus on picking up secret keys, some keys are unlocked by doing a certain thing and some are just hidden very well.

In Soldner-X2 you also get to unlock various things like life, weapons and ships and so on, it works as a really good motivation factor for playing the game more even if you die all the time, the more you play it the better equipment you get more or less as it is almost like an XP level up system. 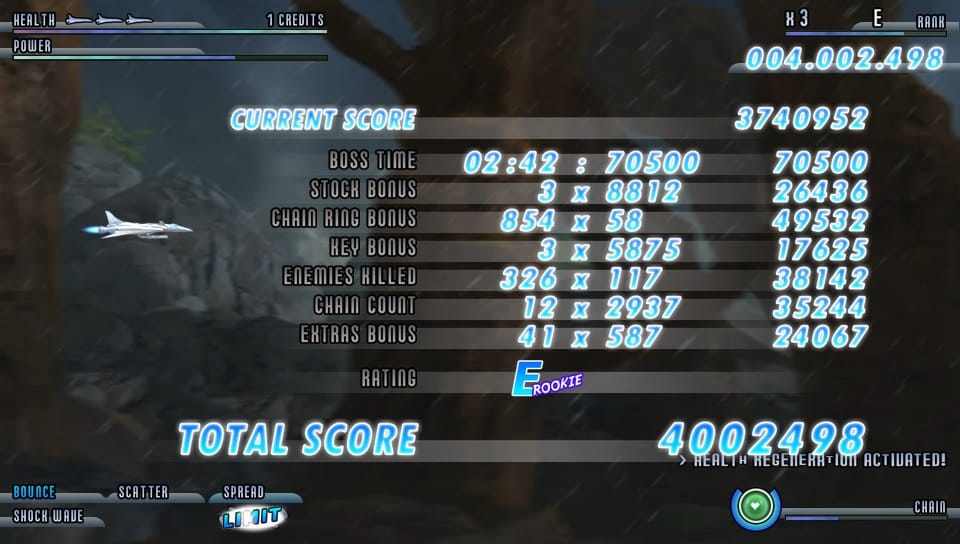 When you complete a level you will get this screen, it tells you all about how you played really and this is most likely when you will realize the importance of the chain kills / combo and the keys. 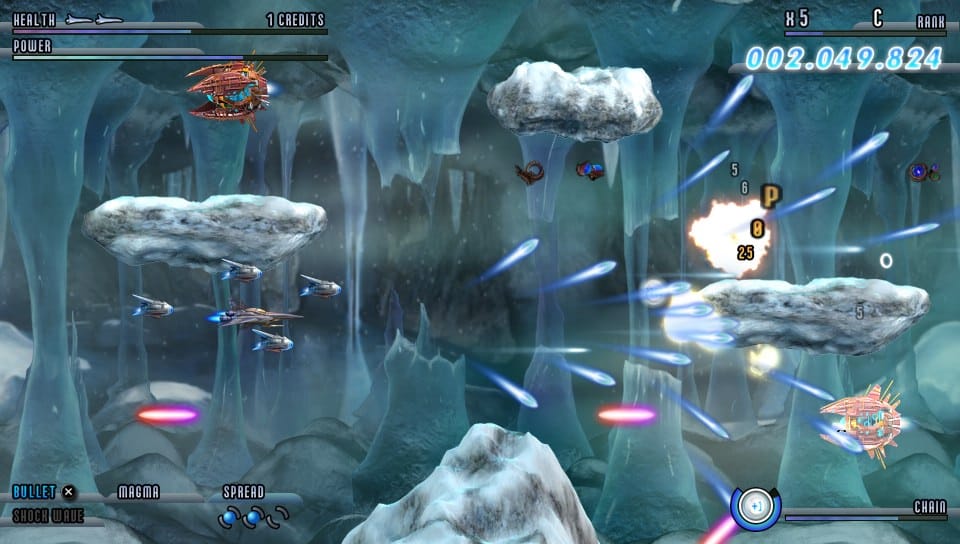 The best thing about the Soldner-X games have to be the power-up system, here you can see some of it in action, my ship is surrounded by 4 helpers (also known as “option” in Nemesis/*Gradius) and there’s even a hefty weapon spread upgrade too which basically covers the whole screen.

The thing with Soldner-X though is that no matter how insane your upgrades are you will still have to “fight” your way through the game as it kind of adapts to your skill and weapons, it works really good for bad players as well as for good players really, quite amazing actually. 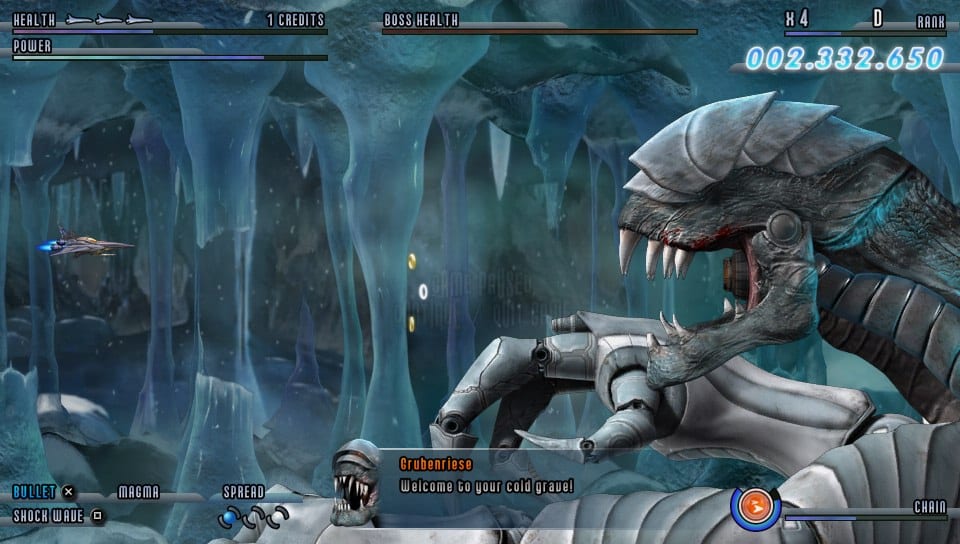 There are never any frame drops or whatever, the 50/60 frames per second action are consistent and quite remarkable even, both games look insanely good at times and the more stuff that is going on the more impressive it gets.

Huge boss fights are the key for the second game and not so much in the first one, some of the fights are incredibly satisfying, to say the least, and many of them are more or less a big “hello/tribute” to all old school shooters from the 80s and 90s. 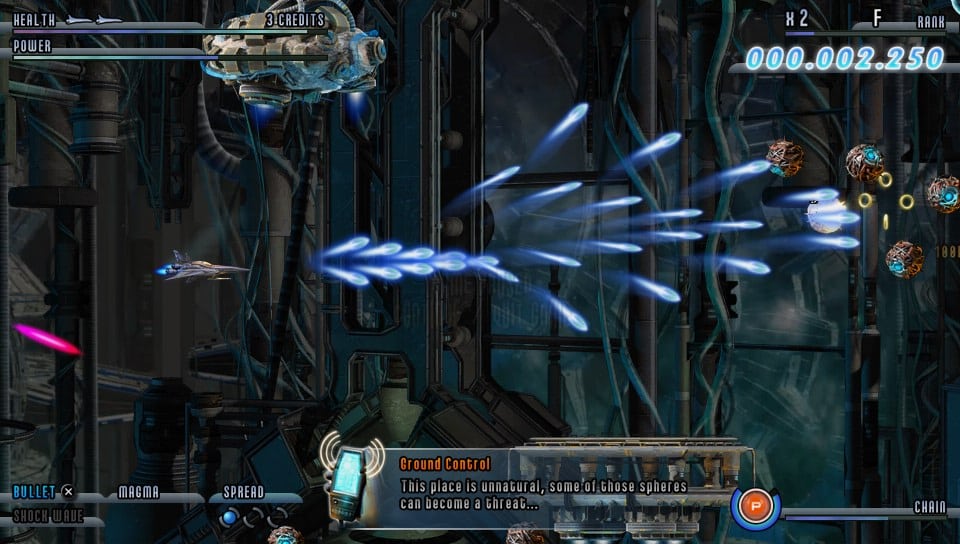 Another cool thing about the series has to be the brilliant music, proper early 90s music with a techno-ish feel to it all.

There are also the sound fx and speech on top of the music and it works really good without making the “sound picture” feel flat or repetitive. 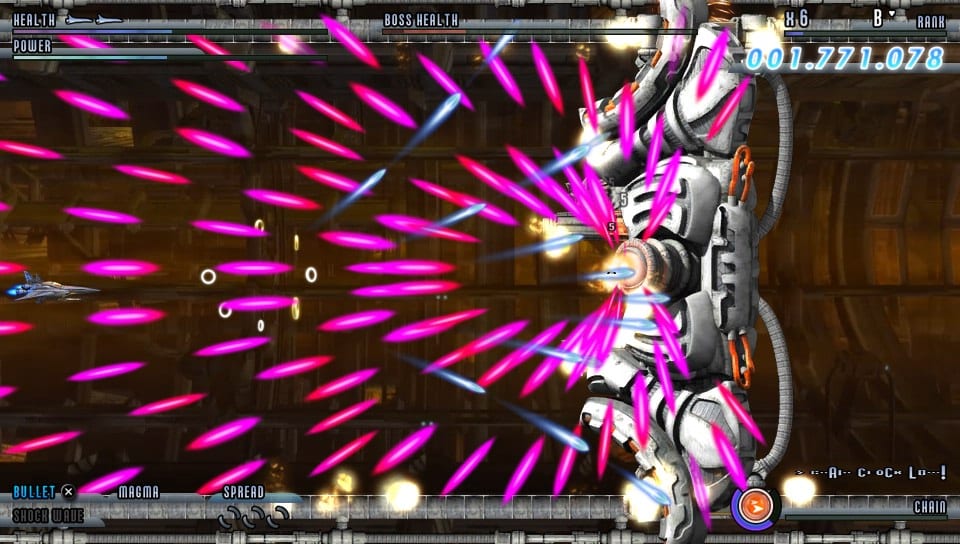 Some of the boss fights in Soldner-X2 can be rather aggressive but far from impossible, you just need practice and maybe most of all playtime.

The colours and effects maybe most of all the graphics style just screams AAA Shoot ’em up and if these games had been released in the 90s then this could have been a proper system seller really. 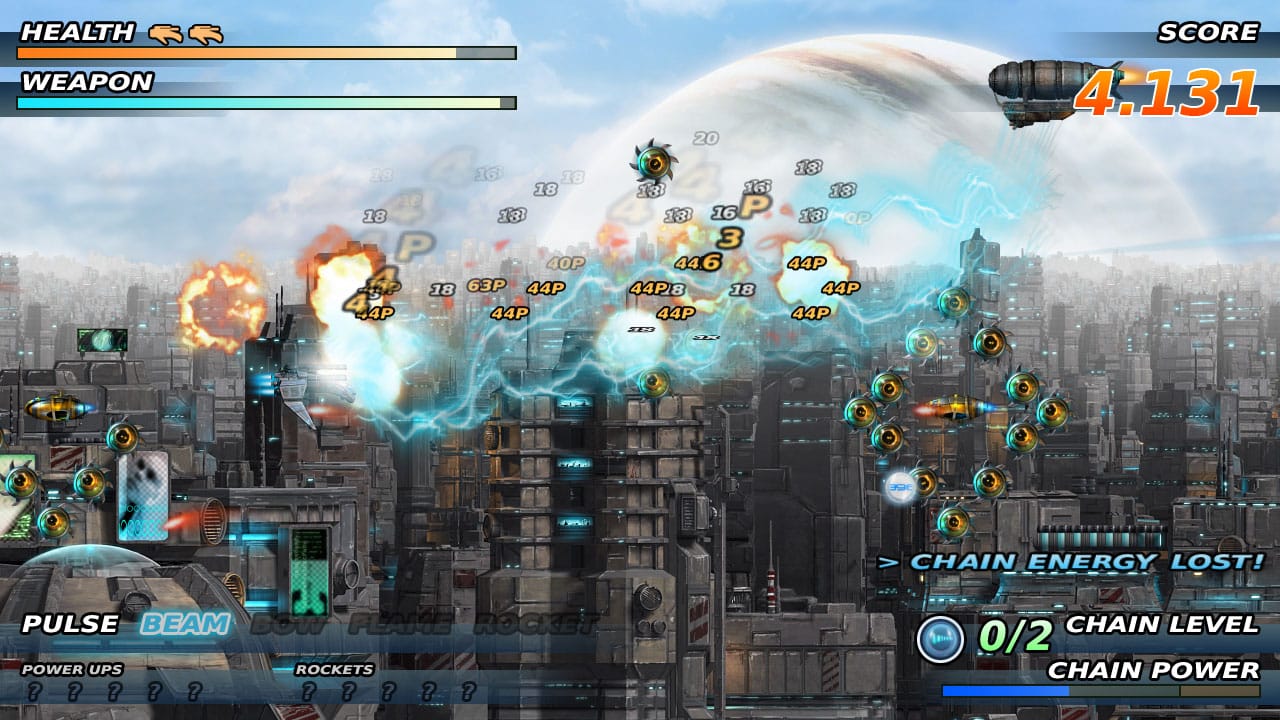 I decided to include 2 shots from the first game too and most owners of the game will probably remember these as they are from the first world, the screenshots do the game no favours really as it is when it’s moving that it looks incredible, multilayered parallax scrolling, tons of fantastic hand-drawn details and yes, it is silky smooth at times. 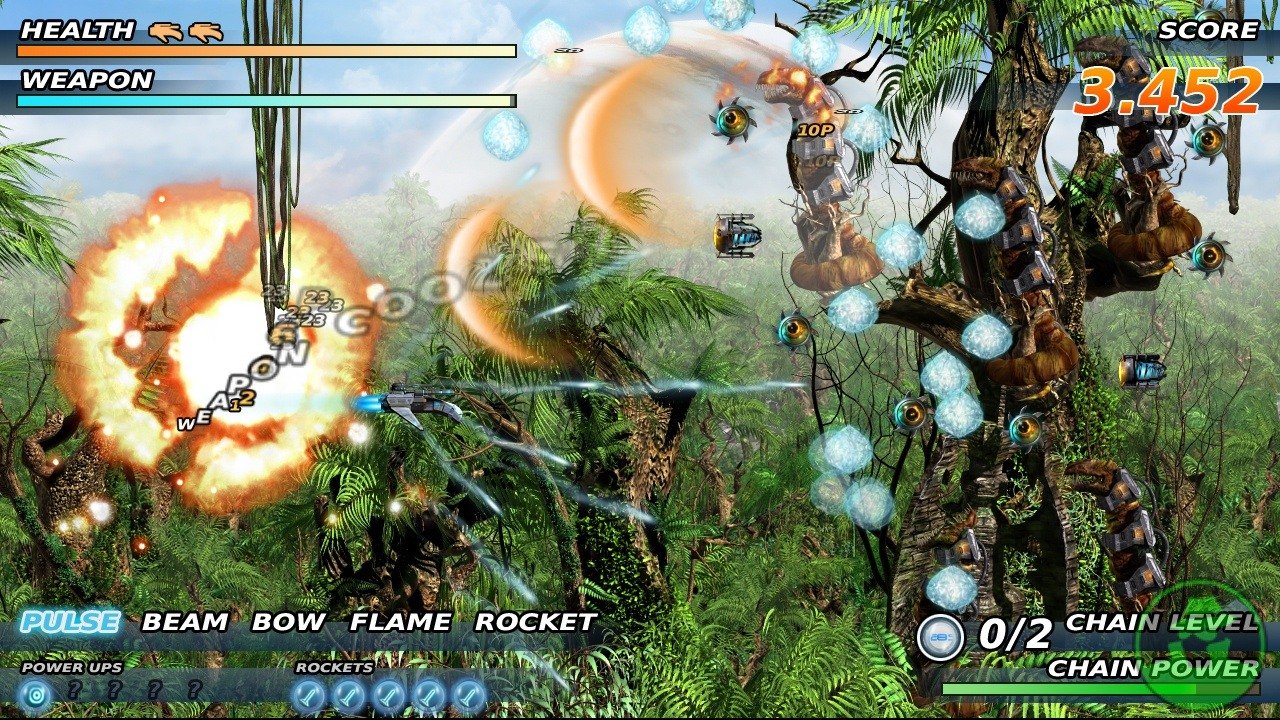 This is where you encounter the first “boss” in Soldner-X, I really hate the word boss for such a thing but yup, it is indeed the end of level guardian and no it is not amazing or whatever, the bosses after this world though is a whole lot better. 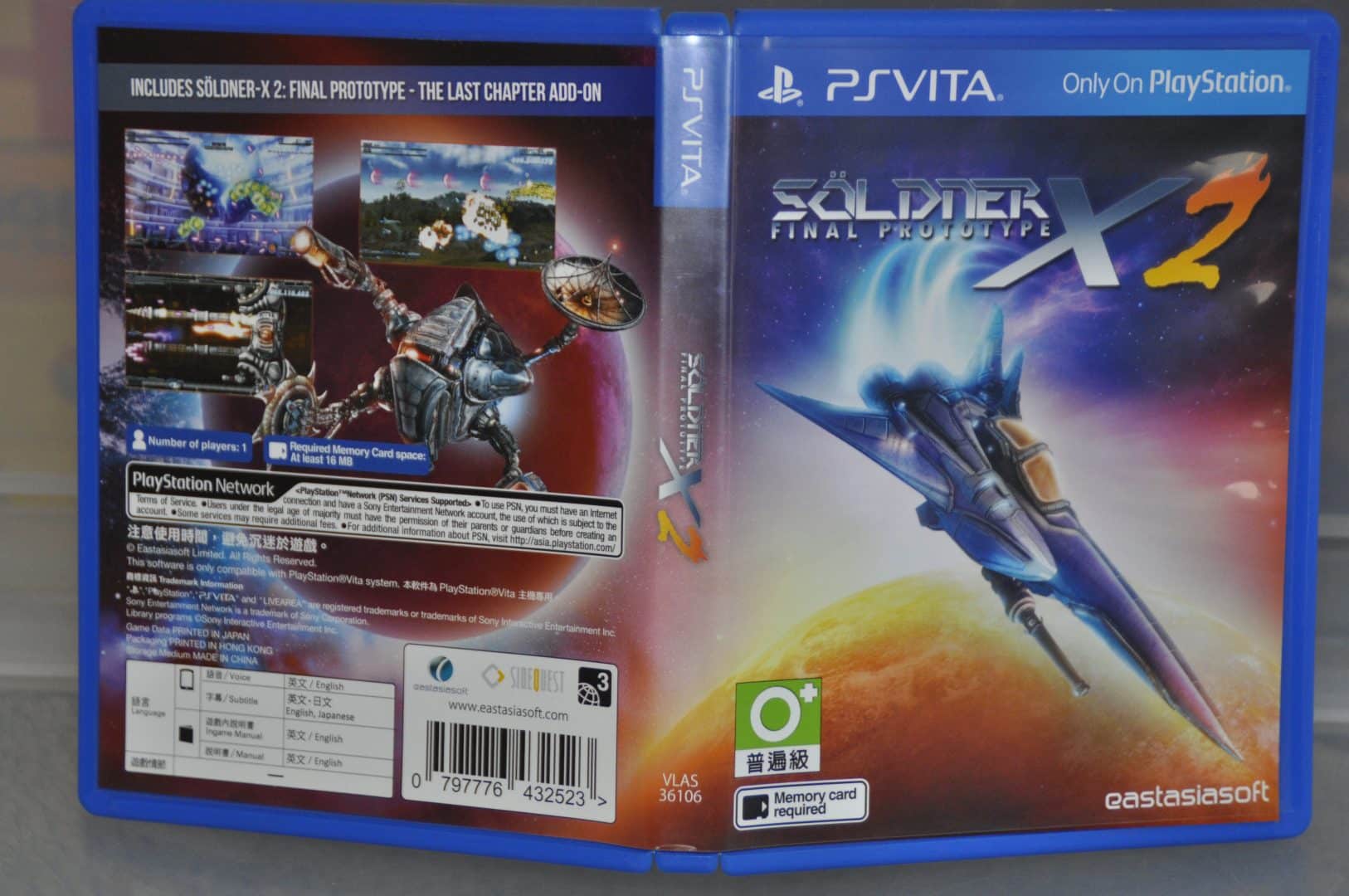 The game never came out in physical form for the PS3 sadly but this is how the PSVita exclusive version looks like.

A very limited run was done for this one and I luckily managed to get it back in 2017 when it was released. 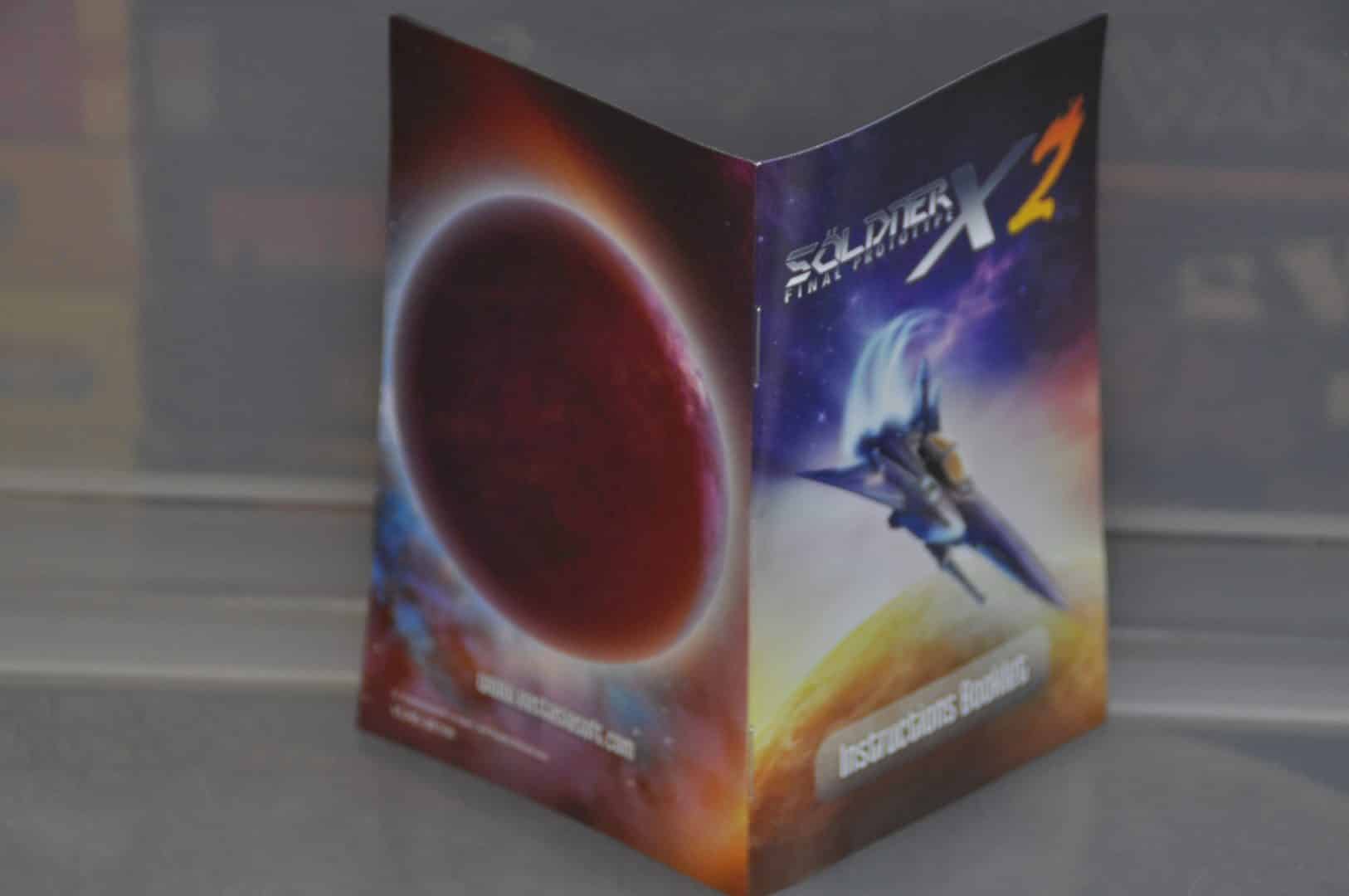 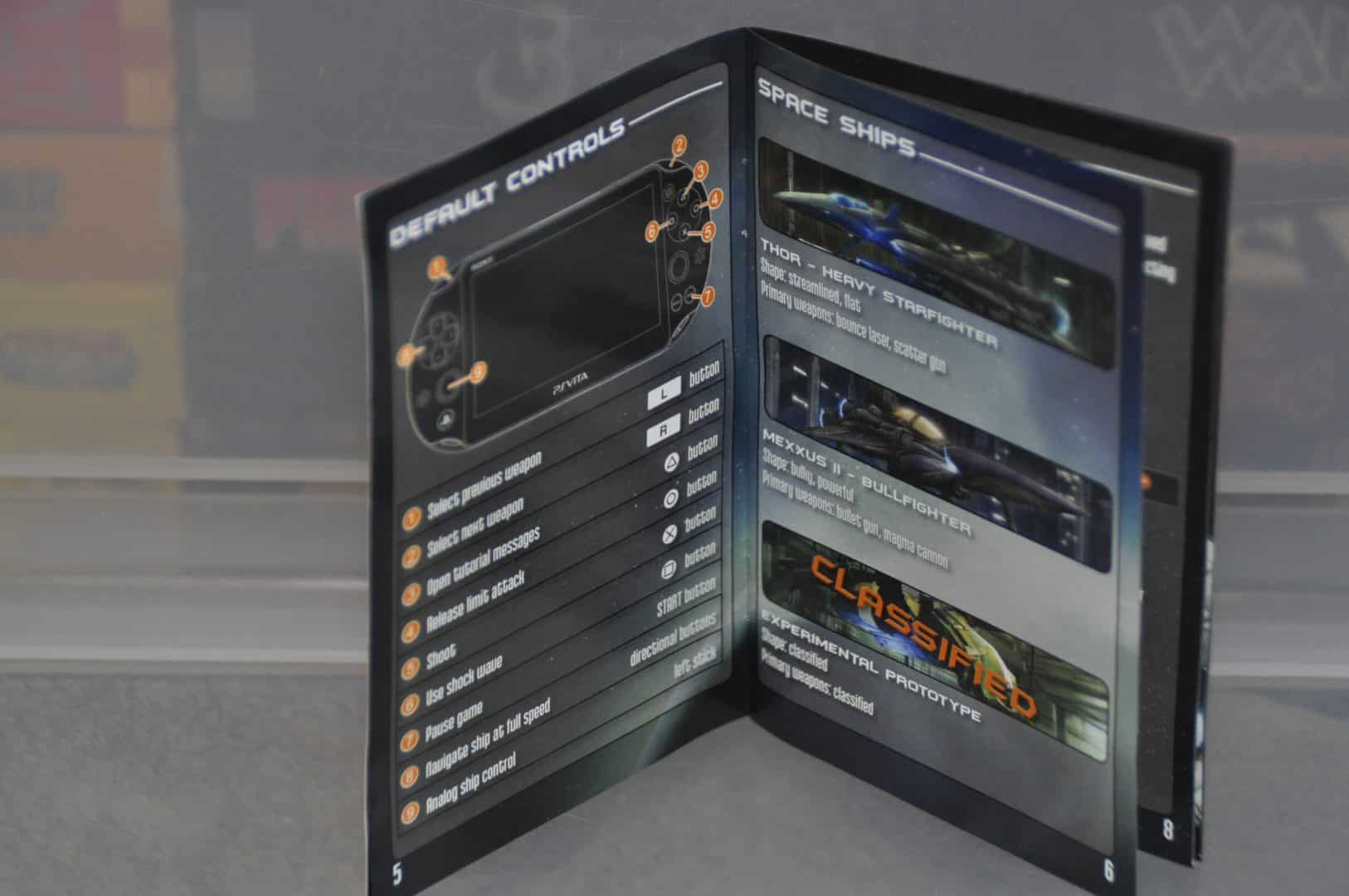 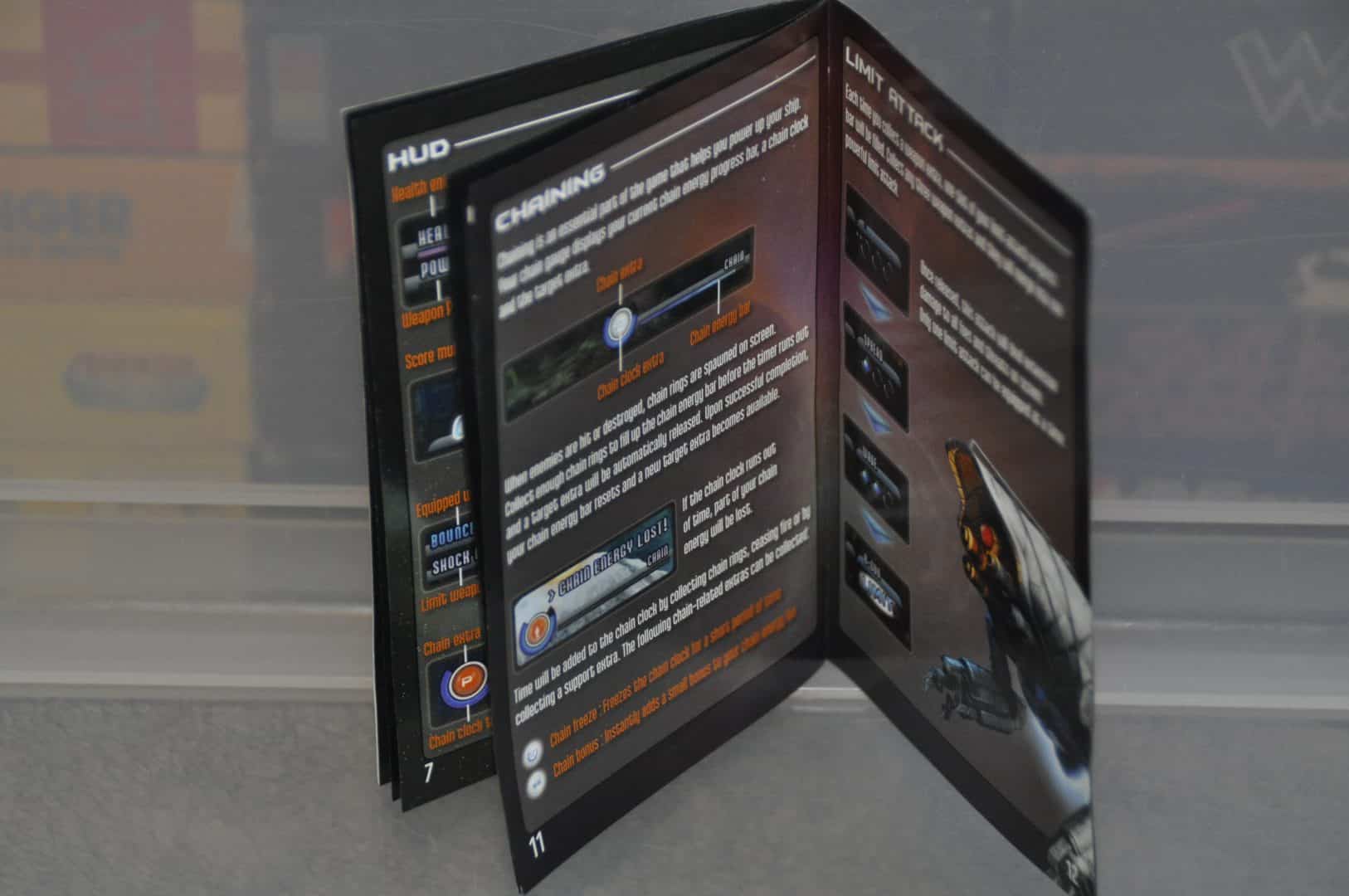 There is a pretty detailed manual included inside the box too, every page is in full colour with loads of pictures etc, a rather uncommon thing these days. 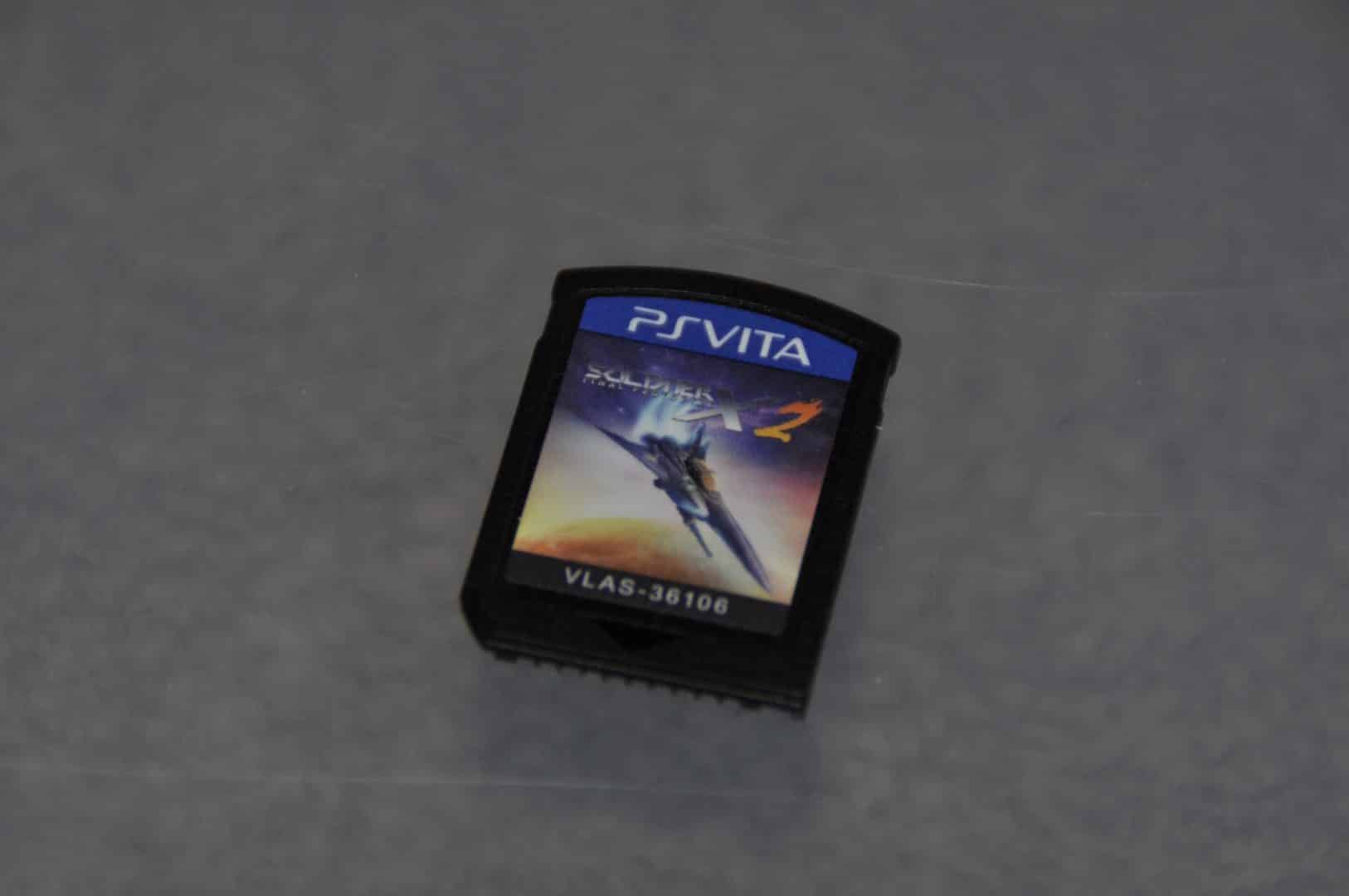 I have done a lot of Vita articles here (for the last 6 years) at the blog and I still can’t get over the game memory cards and also the writeable storage cards for the Vita, sad that this ended up being one of the most annoying features for the handheld 🙁 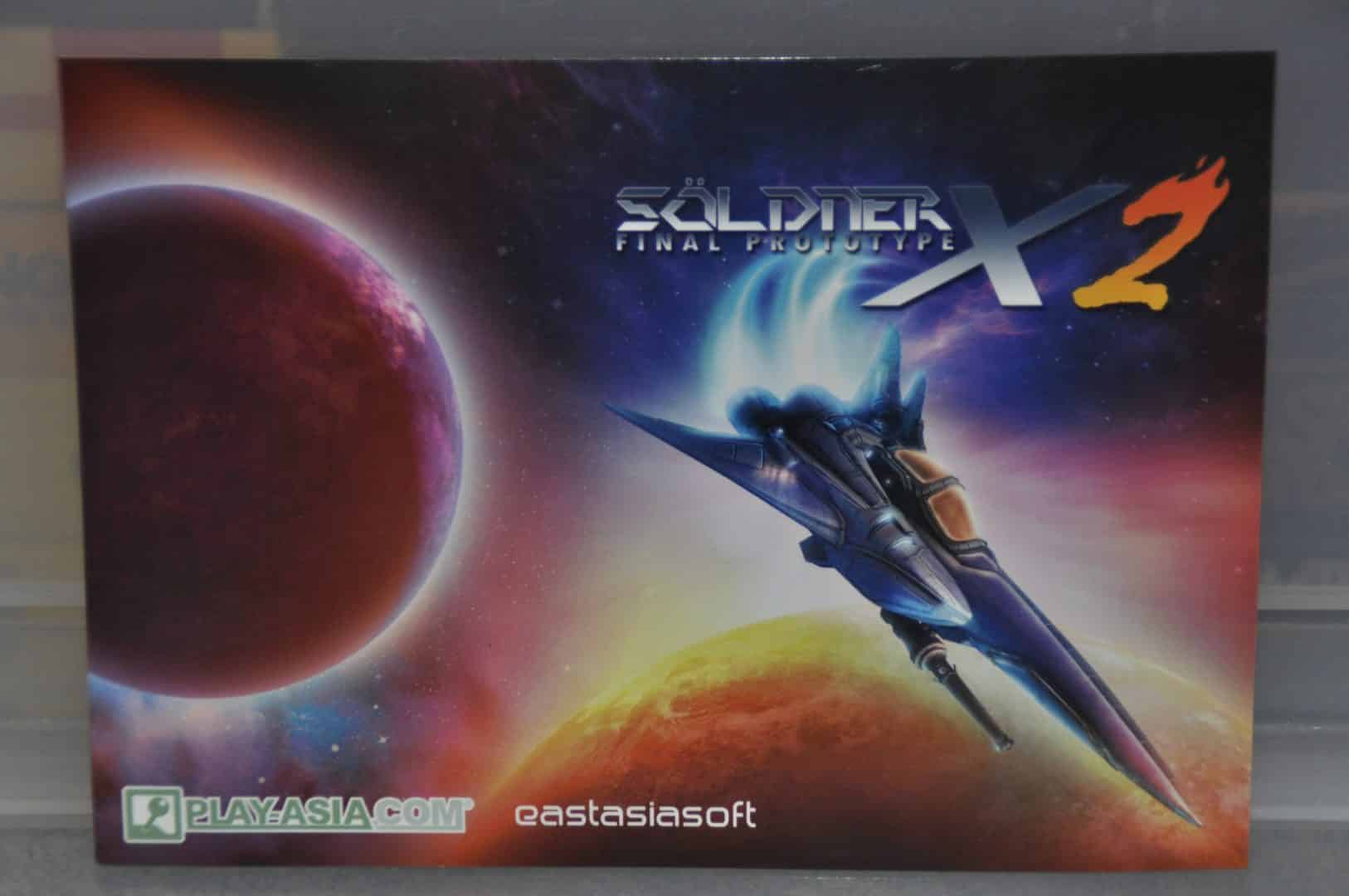 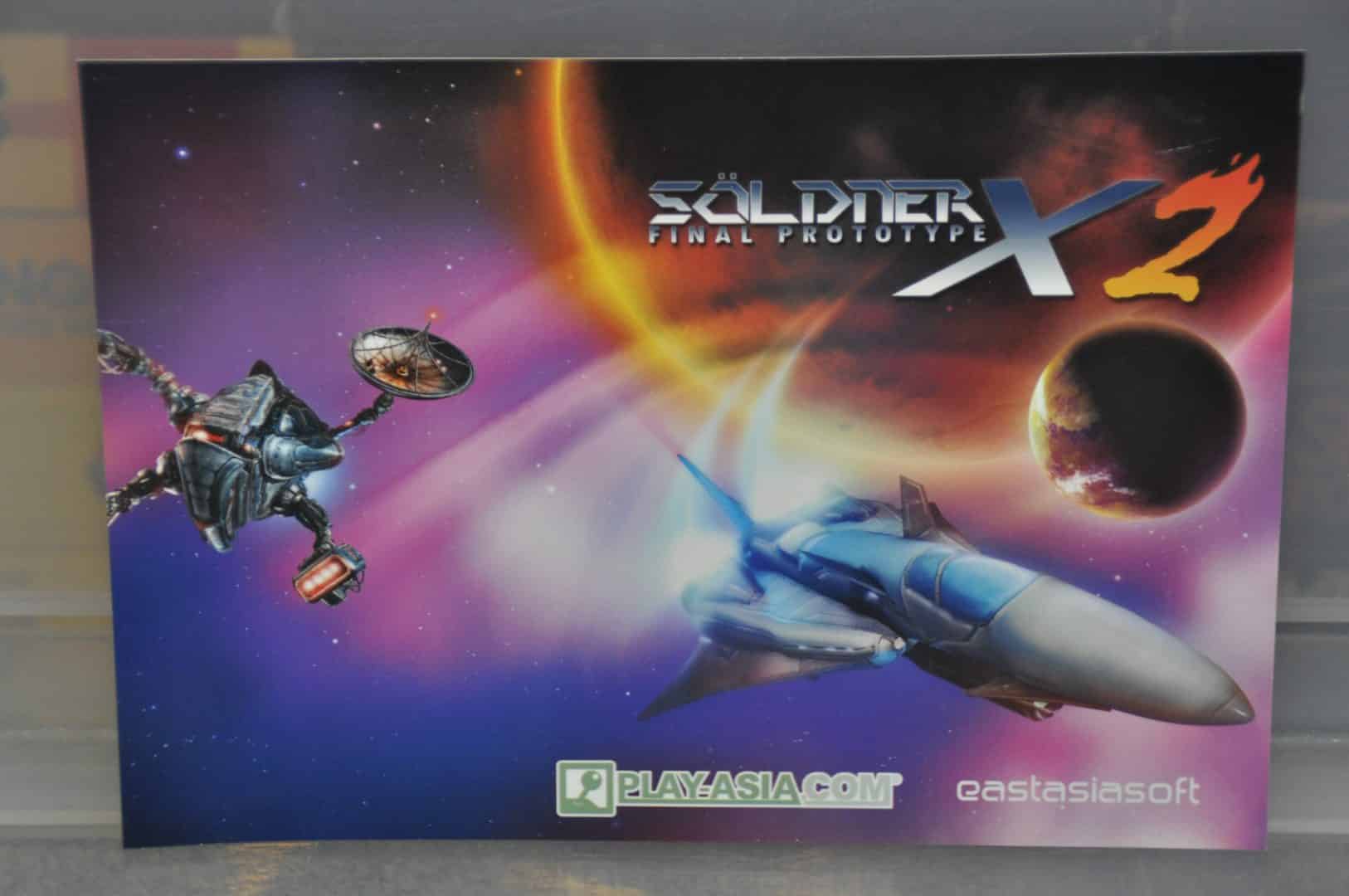 A rather awesome double sided Artcard also came with the package, sadly this one is too big to fit inside the cover which means that I had to store it away for its collectable value and therefore I had totally forgotten about it until I started doing this article.

Soldner-X2 is just as awesome as the first one really and as a series this is a must have for all shoot em up fans out there, the Vita version shows that games like this can still be relevant in today’s gaming world and maybe most of all prolonge the lifetime of the handheld itself as it feels fresh and that OLED screen really brings out the graphics in a way not many other tiny screens can do.  I really want a PS4 bundle or even a new game soon, why that ain’t happened yet is beyond my understanding really but until then I will play both games on the PS3 and continue to play this Vita version whenever I am on the move.

Follow Us... Inspire Us To Get Better... Keep The Flame Alive
Resident Evil 2 Remake – Game Review It Came From The Desert Remake. Episode 2

2 thoughts on “Where Did The Soldner-X Franchise Go? – SX2 Limited Edition”