I was first introduced to this game a few months ago and i must admit that I never expected this to be released as a full-blown title a few months after that, it wasn’t that it felt like a bad game or whatever, it just didn’t feel like a commercial title if there’s such a thing. 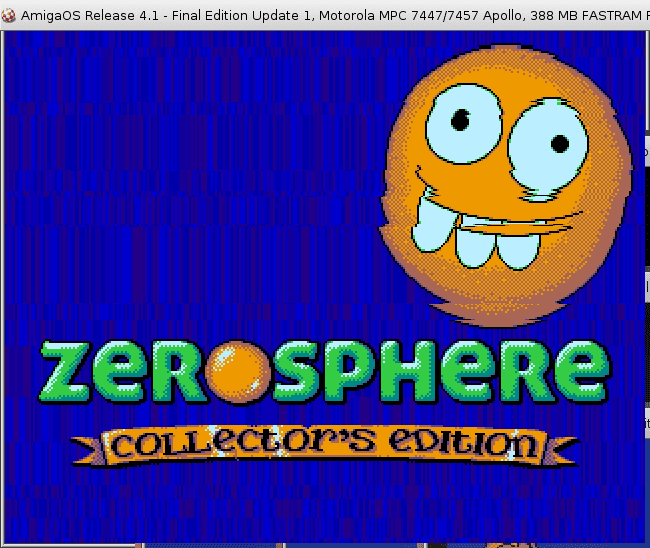 Zerosphere seemed like a pretty standard run of the mill Platforming game right?

How wrong I was, after playing 20 of the 40 levels the game comes with I realized that this is a game I need to write something about right away.

Zerosphere is a platform game where you guide a “ball thingy” and jump and roll around looking for gems that will open the exit, it’s simplistic but that is solved by them adding a Squinting function. The level is distorted and not fully visible at all times but when you enable the Squint button you will see the screen as a normal game and yes you can only squint for a limited amount of time as its energy based.

To make things even more interesting they even added a timer too which means that you won’t have the time to analyze the levels all that much either, you are stuck with 3 lives albeit extra lives are spread throughout the game but once you lose them all , well then you go back to level 1 again as there ain’t any passwords or level save functions, it feels natural too as the game ain’t all that hard and it feels fully possible to complete it without n00b functions.

The graphics and the gameplay mechanics works really good, it ain’t millions of colours and it certainly ain’t a full-blown AGA title  (it works on all Amiga models btw) but it plays silky smooth and all the levels (so far) have been very polished and well thought out.

Zerosphere started out as a PD project many years ago, the first release was seen all the way back in 2015, the Collector’s Edition version is a new product with new levels, new pickups/items and things like warp portals, high score saving and so on.

Time for a look at the Collector’s Edition box…

The game comes in a beautiful cardboard box, very good design and more in lines with releases back in the past compared to some of the other titles produced the last few years. Huge white box with good looking screenshots and everything feels very tidy and well laid out. 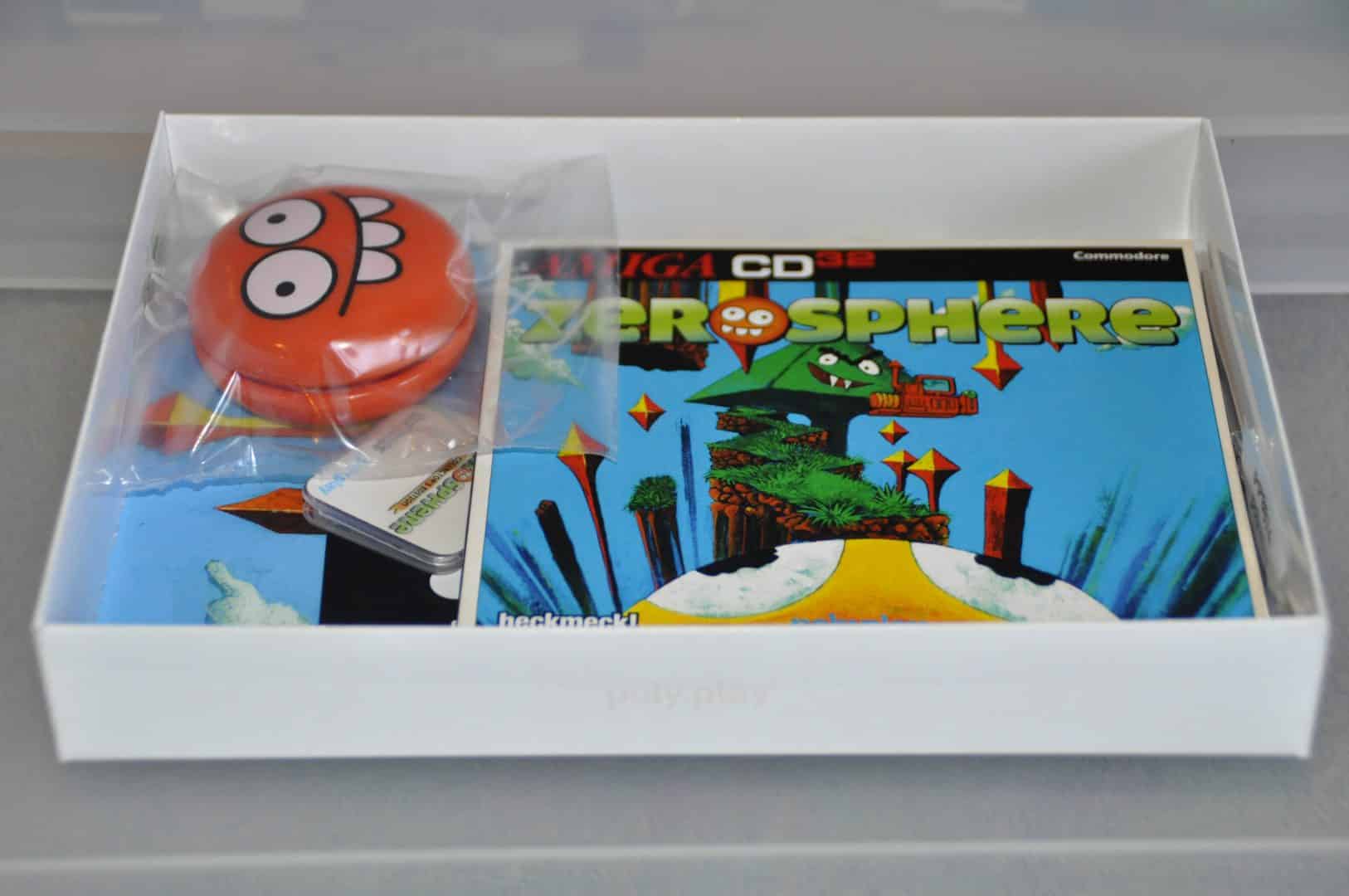 The first thing that met me inside the box was all these things and something that looks like a proper paper cover for the CD32 game must be like 25 years since last time i saw a new one.

Woot?, it really is a paper cover :O, the quality feels perfect and when i compare it to my Battletoads, Out To Lunch and Seek & Destroy paper covers for the same platform, well, i can’t tell em apart in terms of quality.  Brilliant stuff.

More shots of the cover seen here, a nice message to the people who bought it can be found here too, it comes with a sticker and a full manual in colour. A nice little detail is the credits list and that they printed the image of the CD inside the cover too. 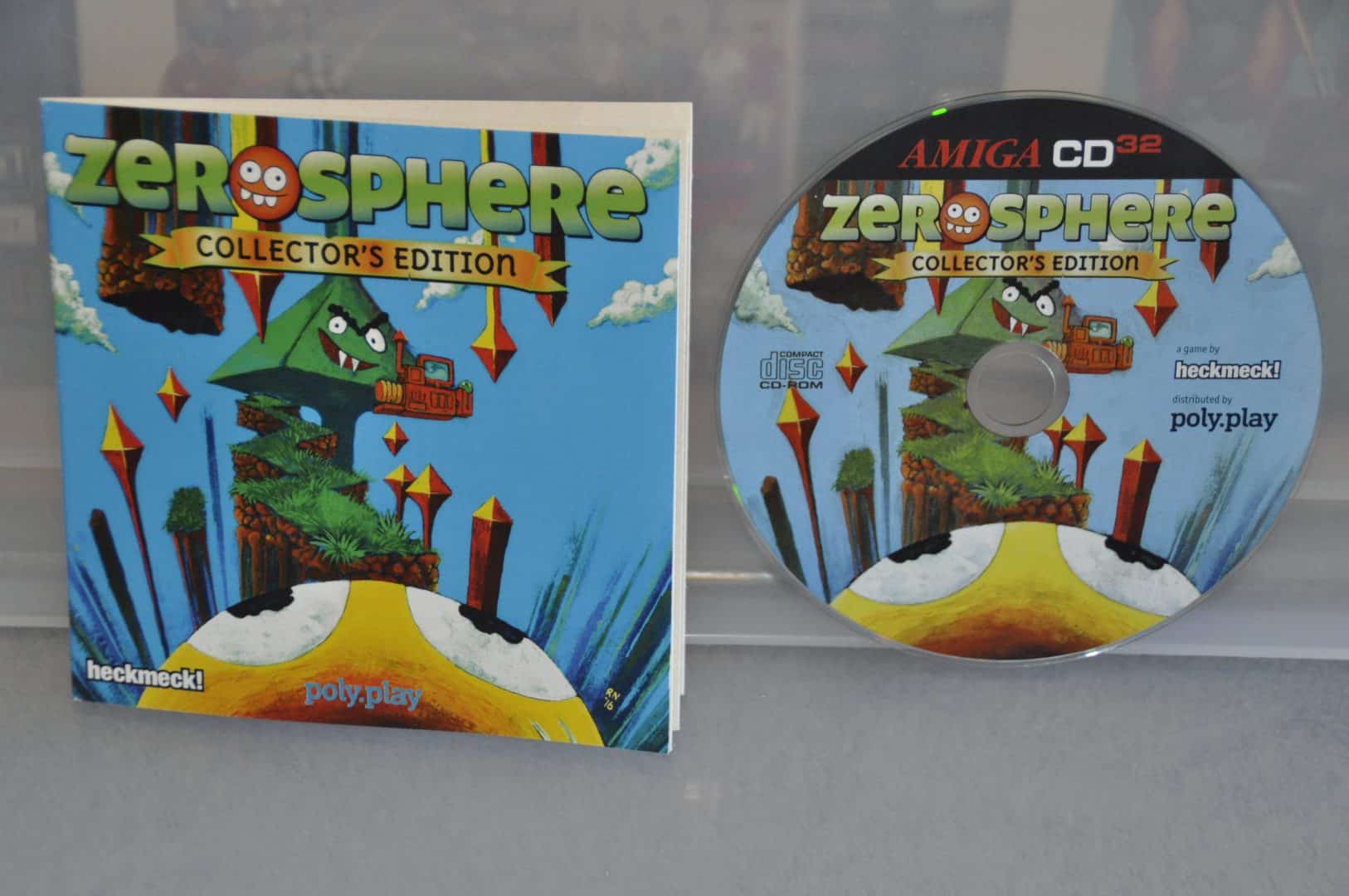 Here you can see the manual and the CD, both in professional quality which means the manual feels as good as it looks and yes as mentioned earlier every page is in colour and well laid out.  The CD is printed properly and it ain’t a CD-R or whatever. 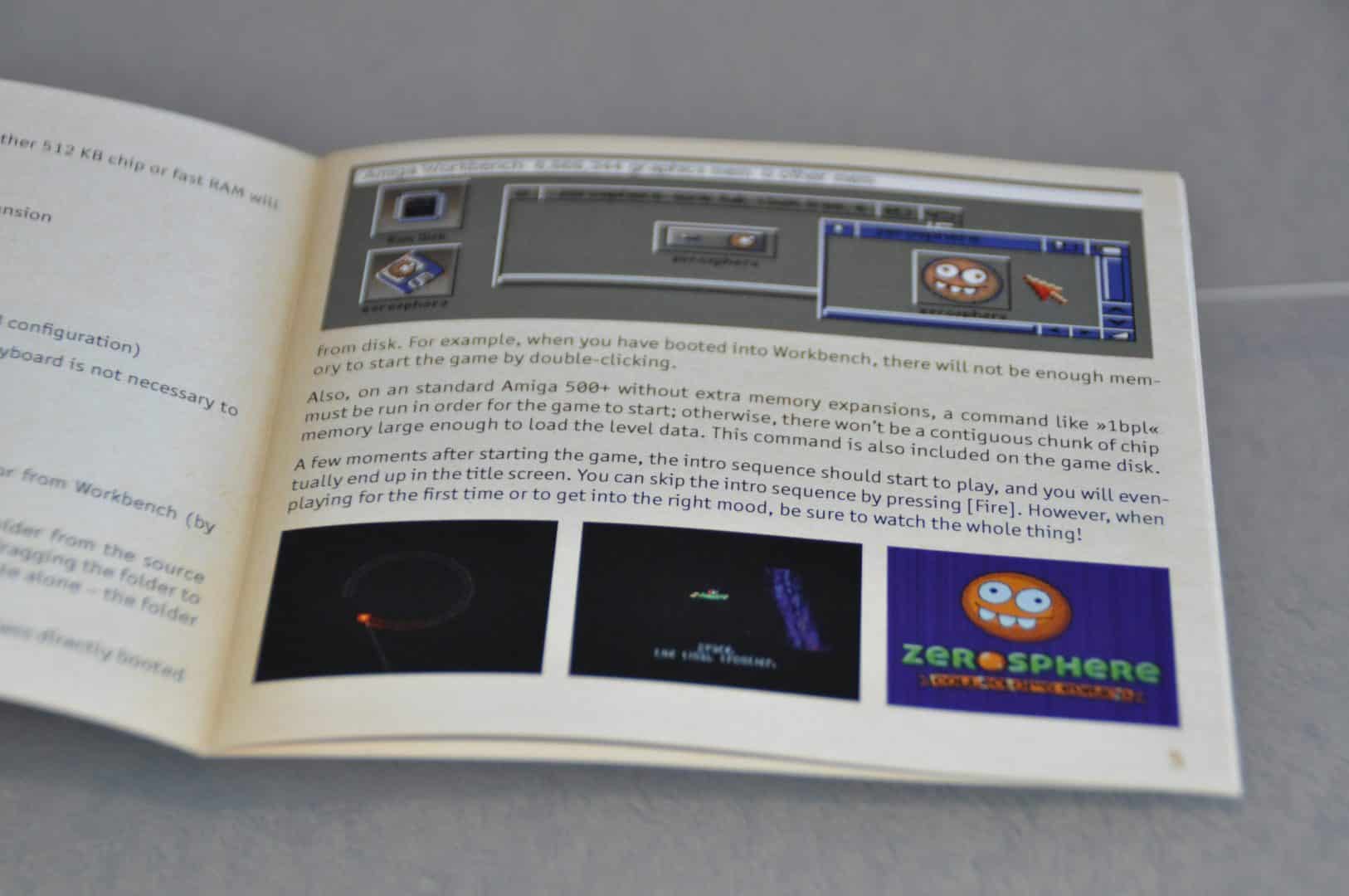 Another picture of the manual here, it turned out a bit blurry but i included it anyway as you will get the idea of the quality nonetheless.

A bunch of stickers are included in the box and while stickers ain’t the coolest thing ever it sure is cool to find them in the box.  The thing in the other picture though ain’t a sticker but a proper YO-YO, it even works, very cool item and one that i will definitely not forget about for the next few decades.

Next up is the small box which contains a memory card of all things, on this card you will find lots of developer stuff like complete sets of sprites and other cool things as well as a digital version of the floppy release (Amiga 500 and up) as well as the CD32 iso in case you want to play it on anything else than your Amiga CD32.

The final picture in the lot is a poster, good quality and a proper looker.

Ok, so that’s all, below you will see a picture of everything in it. 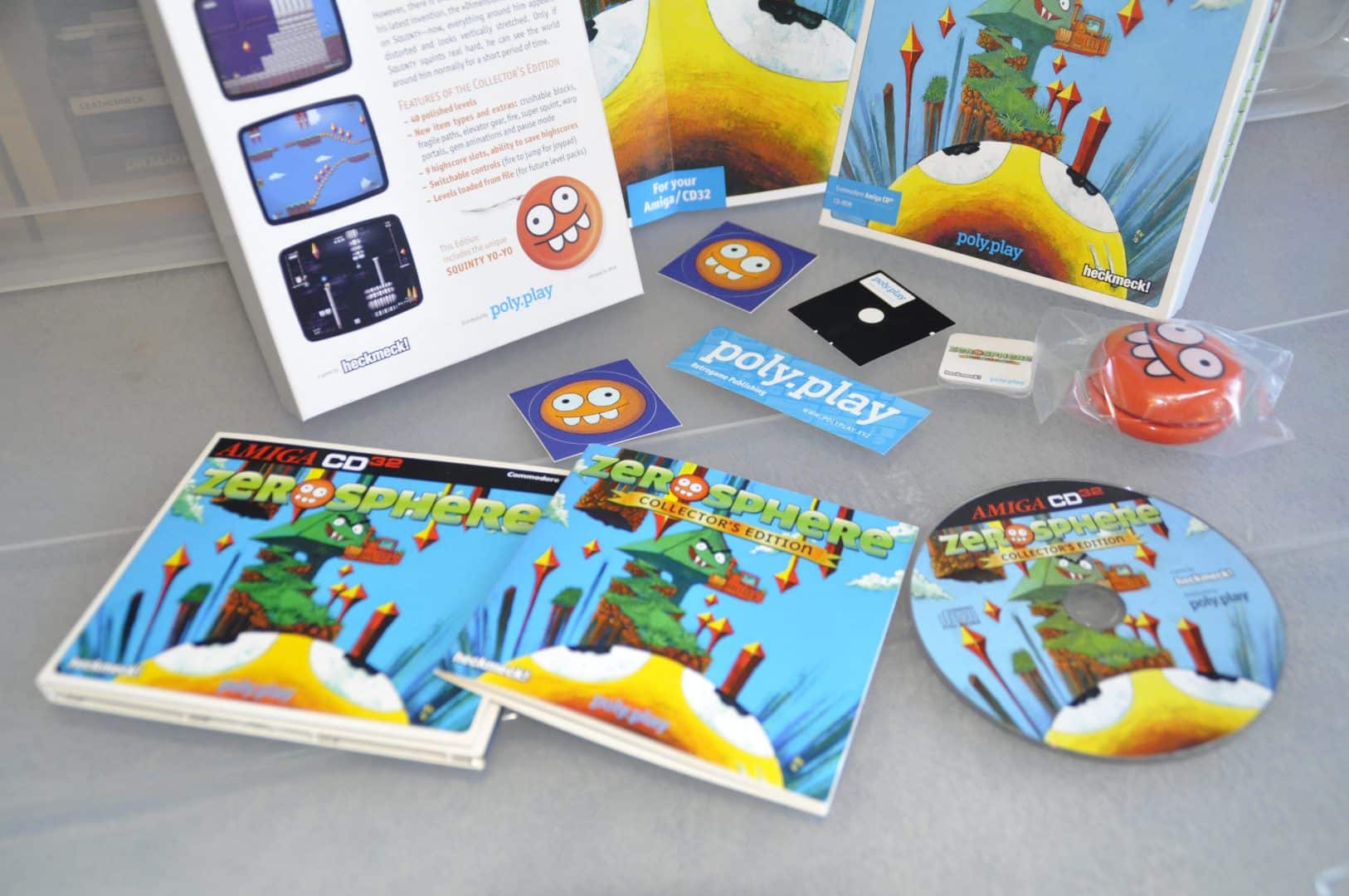 Is the game worth buying then? Well, let’s just say – let the pictures speak for itself-, this collector’s Edition box certainly made me say WOW many times while unpacking it, all the stuff inside the box might be seen as filler to some but for us collectors out there these things are seen as priceless.  You can always get the smaller editions listed below if you ain’t into all the extras.  As for the game itself, well most of it can most likely be seen in the early PD versions of the game but why not go all in and get one of these boxes and show the devs some love?.

There are various versions available to buy:

Support the Amiga community and it’s last few developers, no excuses wanted – Just Do It!.

4 thoughts on “ZeroSphere Collector’s Edition Bounces Onto The CD32”