It’s hard to be a Resident Evil fan, these days. In the last 20 years, creatives at Capcom have done many things to re-invent the saga in order to keep it … alive! The first milestone was RE4, where it all shifted (and in those time with extremely good results) from pure survival horror to action-survival.

Many products – both mainstream chapters and spin-offs – were created to give the fanbase a reason to keep buying the product but the last games, RE6 and Operation Raccoon City, did not really succeed in this task.

Now, while Capcom tries very hard to be groundbreaking again with the upcoming RE7, a new spin-off has been published: Umbrella Corps.

I had the chance to try the free demo for a couple of days and here is the report. It is clear, as some magazines out there have already stated, that the evolution of Resident Evil games is proceeding on different roads: the modern horror will become RE7; the old school products will be incarnated by the remakes (most notably, RE2) whilst the action part will be taken over by the Revelations spin-offs.

So, after the partial failure of Operation Raccoon City, did we really need this game? Actually, unlike RE: ORC, this game is a competitive multiplayer that features two different game modes: with or without respawn. We’ll get into that in a minute, but I’ll first say that the game also sports a (short?) single player story mode, called The Experiment, which was not present in the demo. 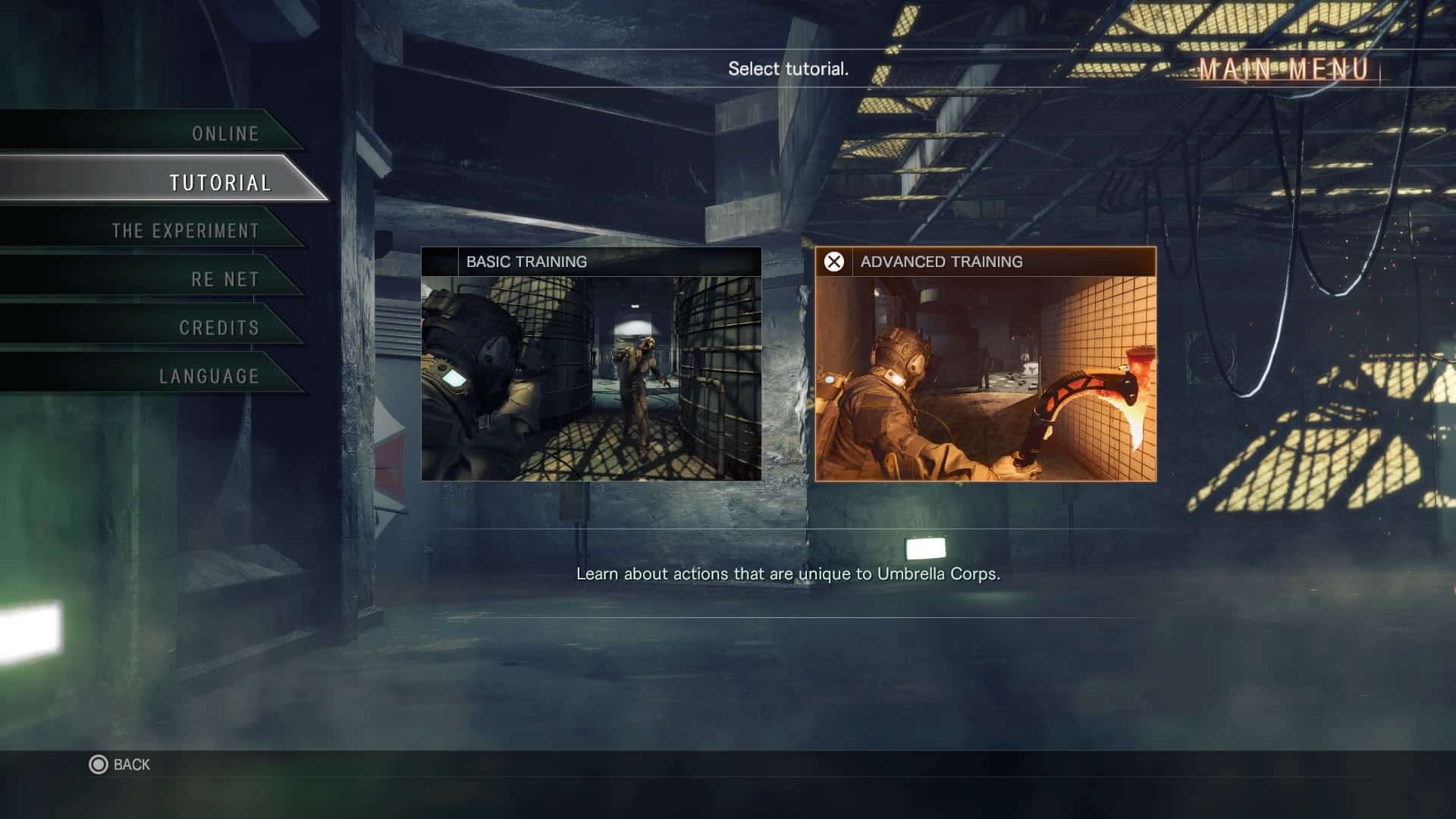 As you can see in the picture above, there are short tutorials to get acquainted with the game mechanics. The video below shows you the second one.

The entire game mechanics are based on competitive combat, set into Resident Evil iconic locations (the Spencer Mansion rather than the RE4 village), where teams of 3 players play a 3-vs-3 match. Unlike RE: ORC, the shooting is not set on zombies but against other human players. Everyone bears on his back a zombie jammer device and, as long as this device is properly working, zombies will not chase you. So here you can already understand that the strategy could be really intriguing: get to your enemy back, shoot his jammer and let the zombies take care of him. Sadly, the electrified brainer you have seen in action in the demo above proves to be a much more effective weapon that can grant you an instant kill, actually ruining all the fun. Why hiding, running and try your best at shooting if you can just smash your enemy head like a watermelon?

Anyway, as said, there are 2 basic game modes: One Life Match and Multi-Mission. 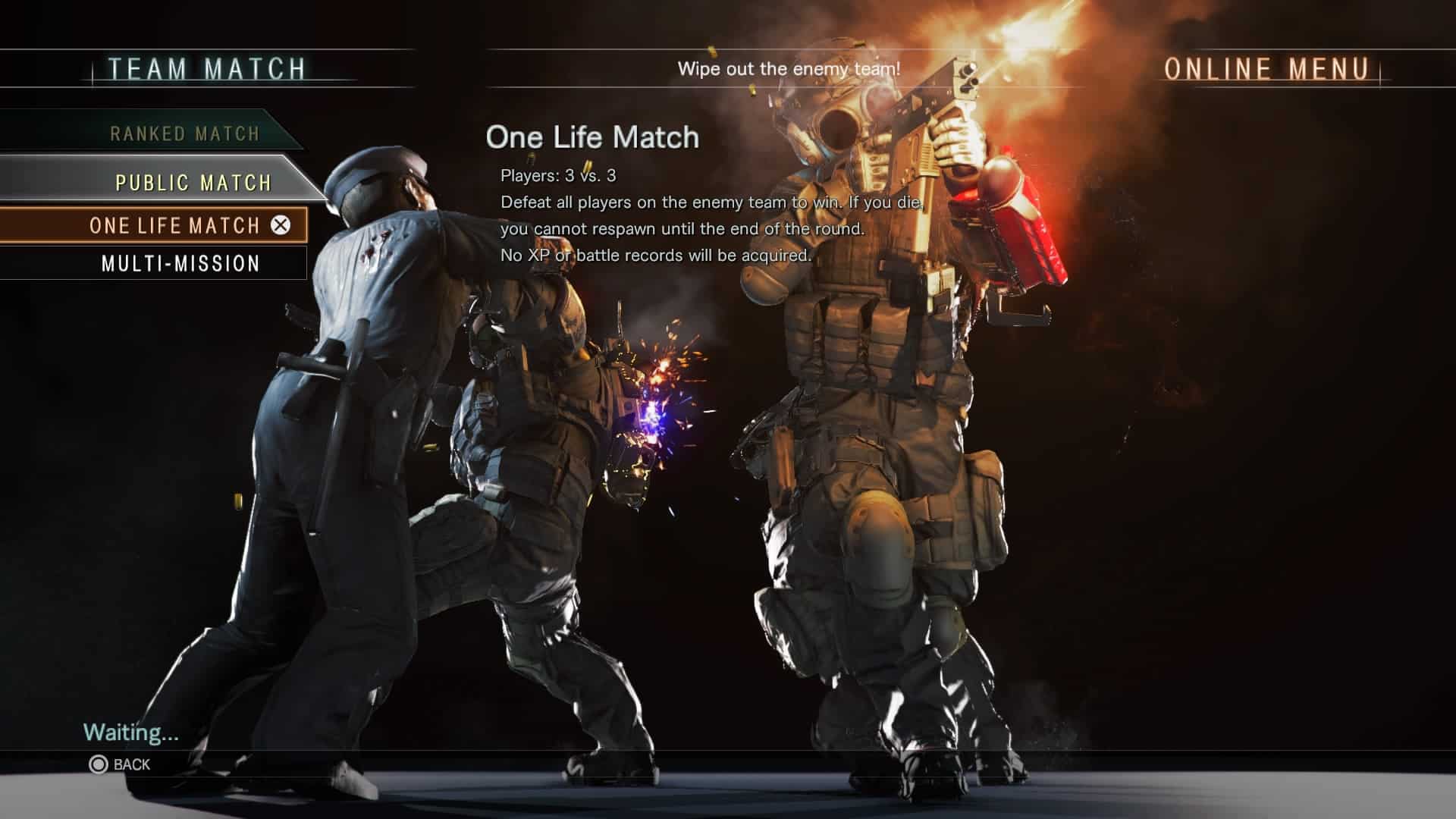 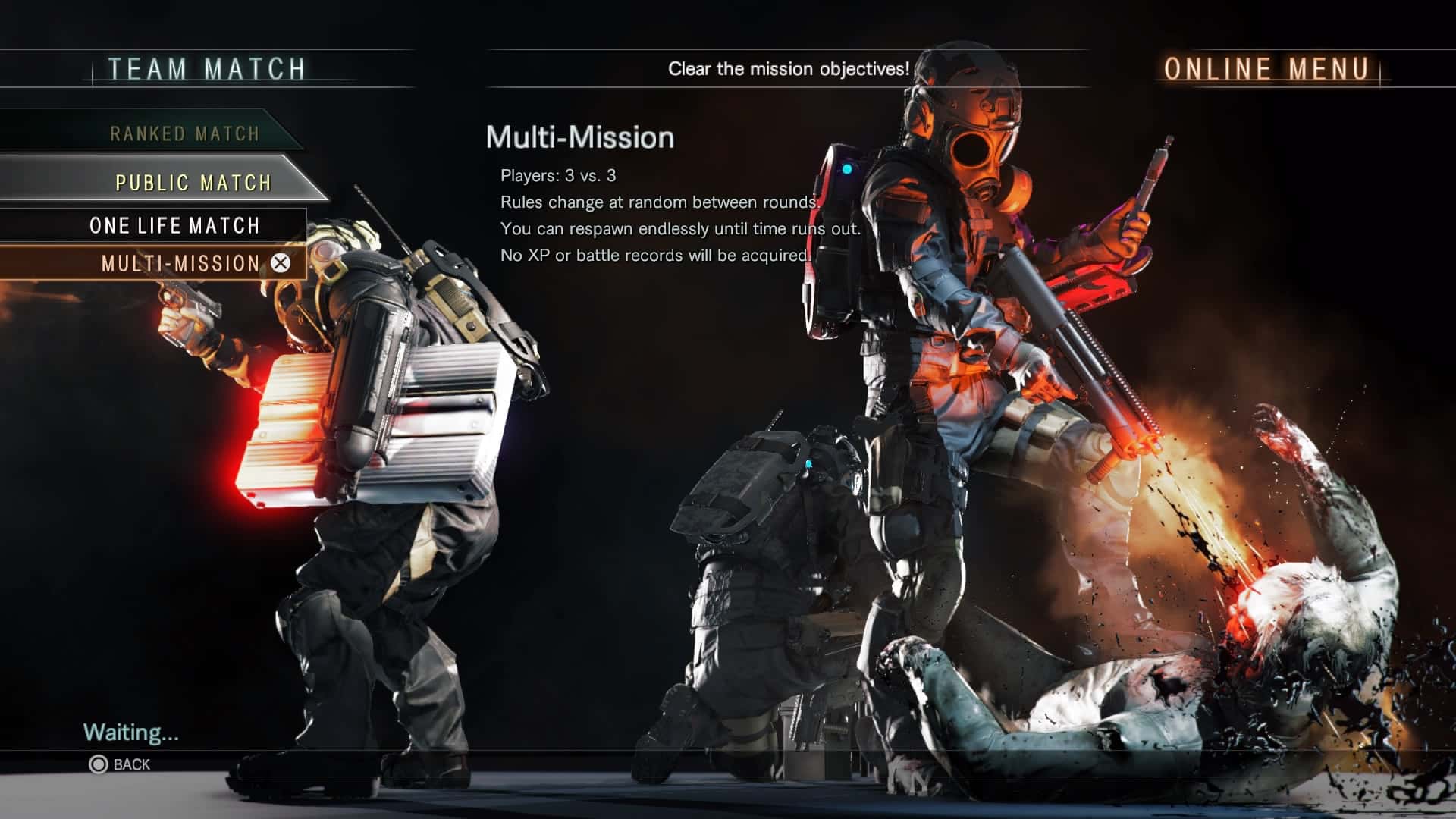 The first game mode is the classic deathmatch: if you die you have to wait until the match ends to be able to respawn. The second one, Multi-Mission, allows for almost instant respawn (usually 5 seconds) but the rules change at every round (get your enemy collars, get the suitcases, get the virus samples and so on). The following video shows a sample of a One Life Match round.

As you can see, the action gets very frantic and there is no time to enjoy the game IMHO. Textures and colours feel rather plain and dull, even if the locations are always appealing. As a matter of fact, it is fun (and rather weird) to go around the mansion be a real predator. 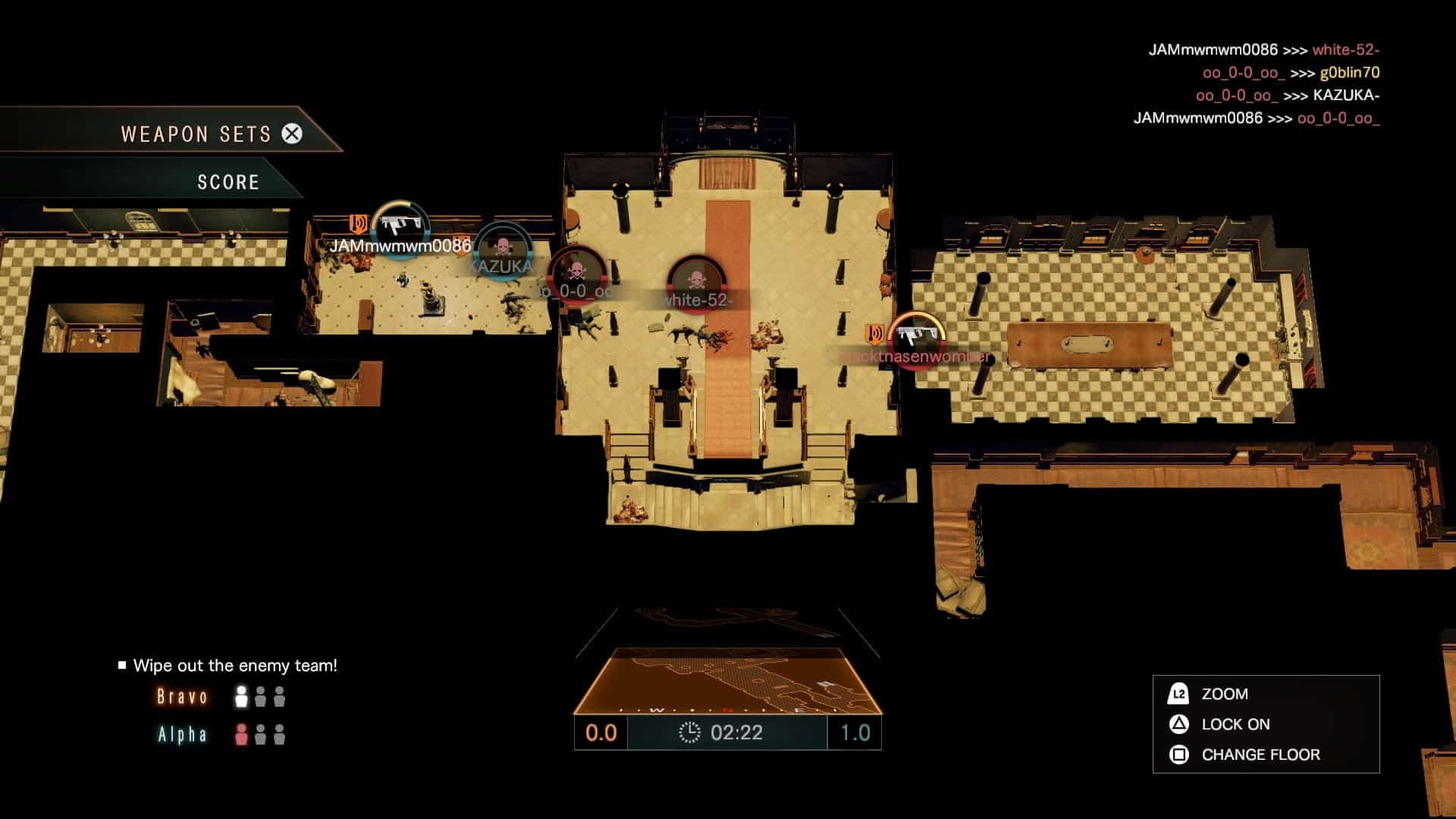 Sadly, I did not have the time to make a video of the multi-mission mode. I found it much more fun, but the arenas are way too small and even though a 3-vs-3 may look suitable for it, the action becomes too frantic leaving no room for real strategy. 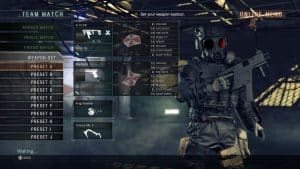 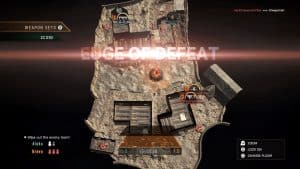 In the end, while I did have some fun playing the demo, I believe Capcom somewhat failed once again in its search for something new. The game looks and feels like a Free-to-Play product, and this is very bad for a glorious saga like Resident Evil one. Three years ago I reviewed Operation Raccoon City and although I know that that game had its flaws, I still think it could have been a starting point for this new instalment. RE: ORC had good potential and it could have been a very good co-op game if it only allowed for REAL class specialization. Umbrella Corps, IMHO, could have walked the same road in much better ways, thank the experiences made from its predecessors. It is a real pity it turned out to be the way it is because I believe RE fans (and player in general) love the saga and are truly waiting for it to born from its ashes.

I decided not to give the game a score since I didn’t get the chance to test the full product, and it wouldn’t be fair on my part. If I ever put my hands on it, I promise you a full review. 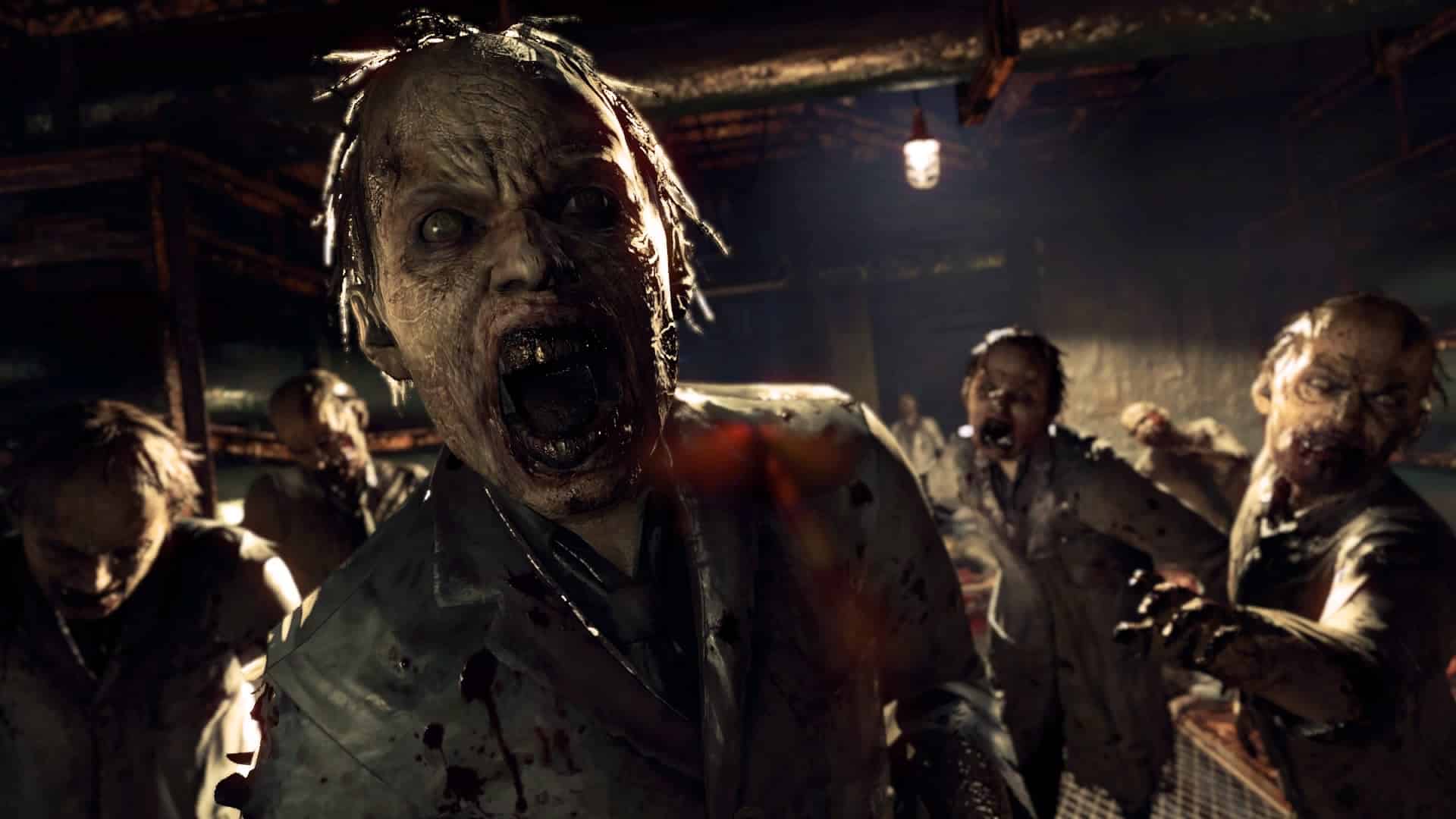 NOTE: I linked this post to my article on RE: ORC. That article still suffers from data loss and sports no pictures. I’ll try to fix it asap. Thanks for your patience.