I’ve been to Akihabara many times …. in my dreams. In those dreams, Akihabara is a sort of cyberpunk, multilevel, dark city. It is a kind of living being, where men and machines are interwoven in many different ways.

Of course, this is not real, and it comes from the mix and mythologizing of many different products that I absorbed until now. Those dreams are generated by the novels of William Gibson (often turned into movies like Johnny Mnemonic or The Matrix), blockbuster movies like Blade Runner or animes like Ghost in the Shell and Serial Experiment Lain.

But these are my dreams and Akihabara is something else.

I’ve been to Akihabara many times … in my games. Some of these games depict situations that, in certain ways, resembles my dreams. In Steins;Gate, for example, the Electric City is depicted in a very realistic way, very close to the real one, even though the story plot takes you into a world where even mythic things (like the IMB 5100) are still present and interconnect in a world of time travels and multiple universes.

Another game, Akiba’s Trip, gives you the opportunity to visit an almost exact copy of the real thing, even though the story relates with a sort of vampires that need to be undressed in order to be killed. 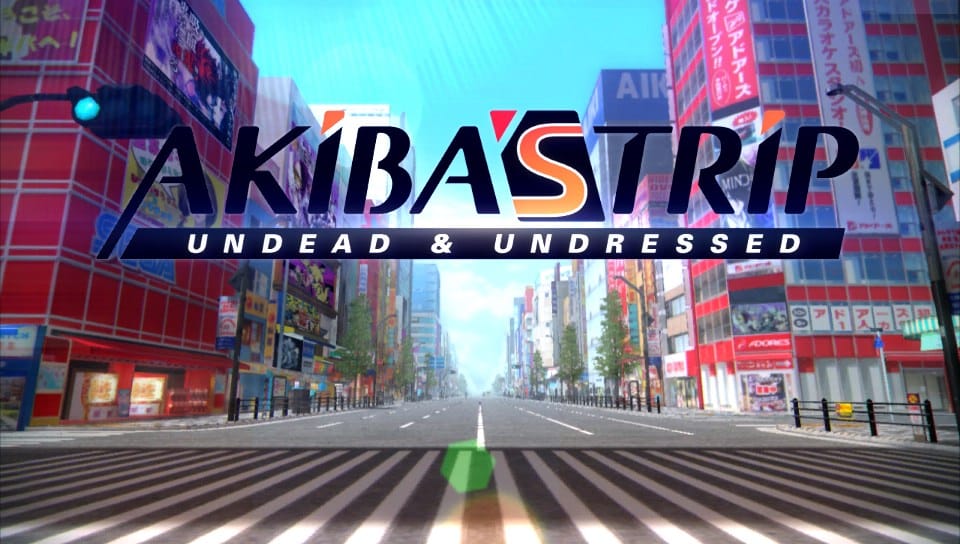 But these are my games and Akihabara is something else. 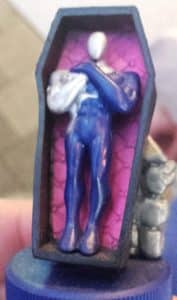 So here it is, the last part of my story about a trip to Japan, this time dealing with one single location. As you know from previous articles, although the trip schedule formally took us to Akihabara for a single visit only, our hotel was only a few metro stations away from it, so I ended up to go back to this place almost every single night. During those nights I actually impersonated a careful hunter, who scans the place back and forth in search of his prey. Not only I was wandering to look for “my” treasures, but I also had some AmigaGuru’s secret missions to fulfil, something that Tony will probably disclose at the proper time.

As odd as this may seem, this is how collectors are and even apparently insignificant things can be needful to them. Furthermore, the best part of collecting not always is possessing the thing in itself, but rather searching for it and, in the process, discovering new places and meeting new people.

Anyway, the first impact with the place was actually like a deja-vu to me. Take a look at the next few pictures and you will surely understand: here is the JR Station, the real one and the one I knew from Akiba’s Trip…

here is the Gundam Cafe, same story as above…

here is the bridge toward the UDX, the real one and the one from Steins;Gate …

and then some famous corners, the first one being one of the many SEGA Arcades…

and the main avenue …

My first visit to Akiba flew away in a matter of minutes: I entered a time warp in which I didn’t even know what to do and where to look. Too many things, all together: anime, manga, models, video games, and everything else related to electronics and stuff. 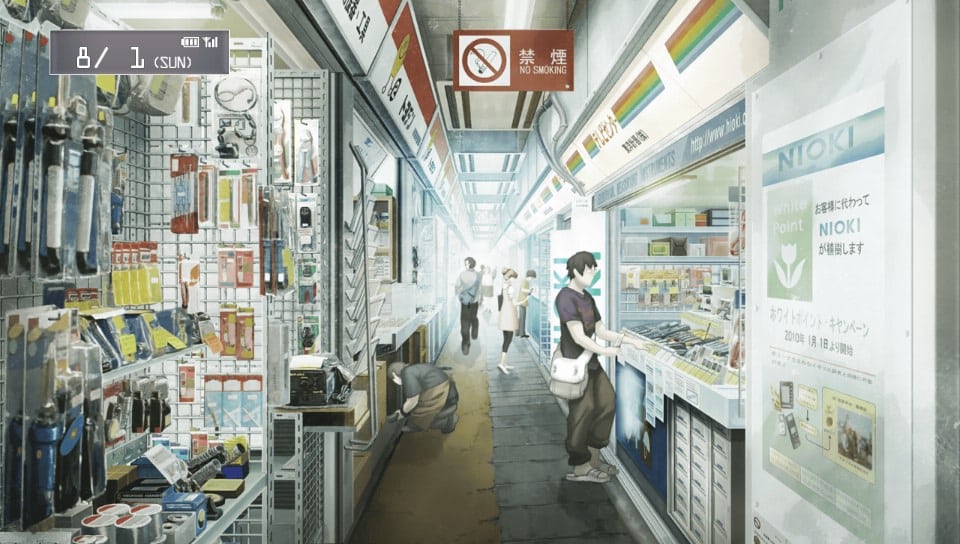 The second visit, though, was much more organized. It started with a raid on SuperPotato, one of the most famous retro stores out there. I have no clue why this place bears such a name, so weird for a retro-games store. This store, despite its odd name, is nothing less than a gold mine hidden in a secondary road! A small and conceived entrance (see the picture below) hides 4 floors of games, consoles, accessories and even a small arcade room sporting old coin-ops. 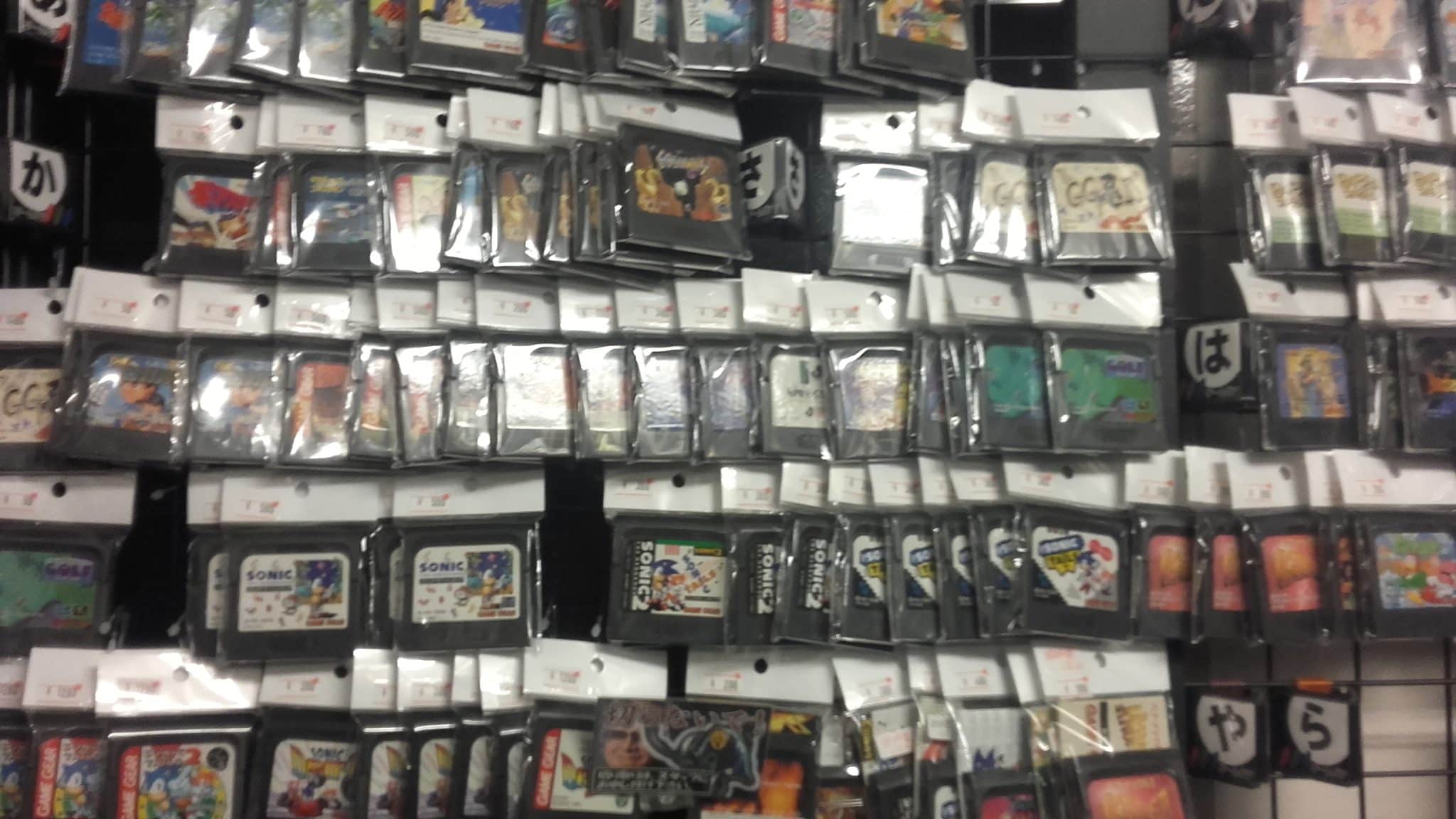 The following picture shows the (partial) result of my loot. These are not the only games I got but, as said, the others were part of a different “sidequest”. You can here appreciate: Ultraman Fighting Evolution (a beat ’em up), Tenchu 2, Policenauts (a true masterpiece), and a weird visual novel (Baroque Syndrome) related to another game I reviewed years ago. 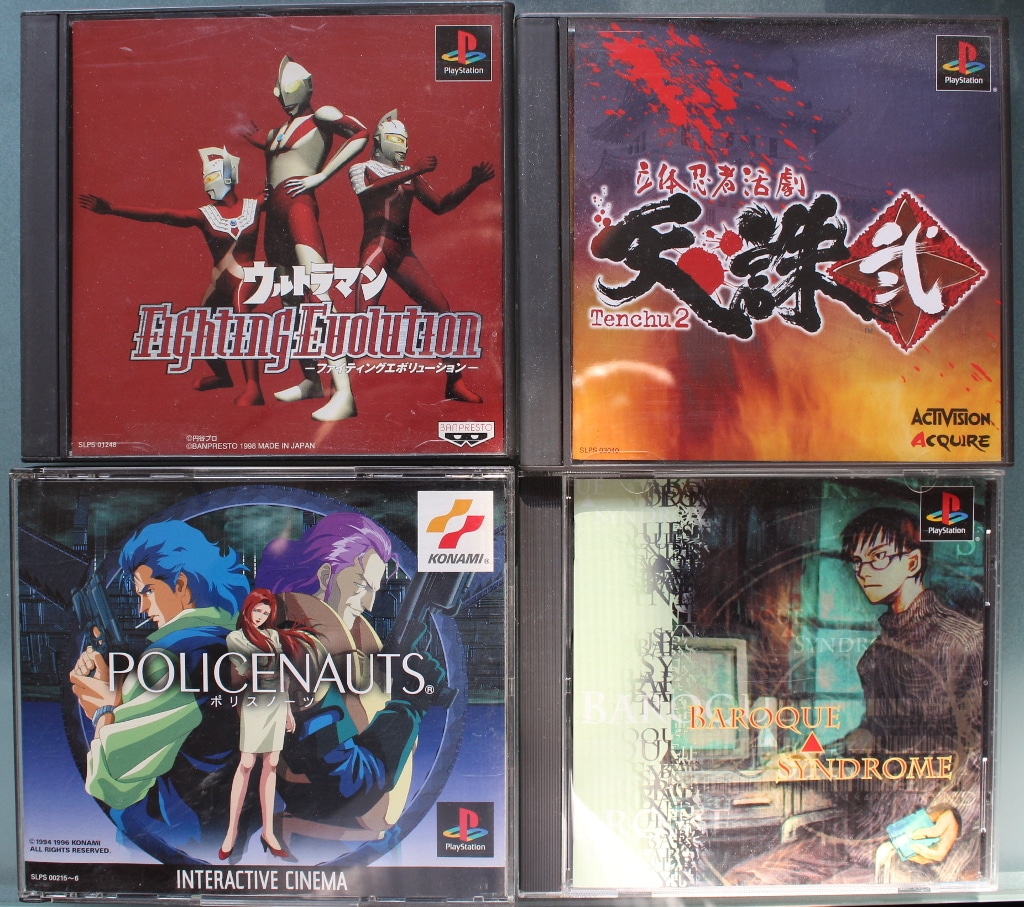 After this very first raid it was already time for dinner, so we headed for a peculiar place. As you read in Part 2, my son was seeking revenge after being denied the Cat Cafe, and so we headed for a Maid one, actually called … Maid Dreaming. 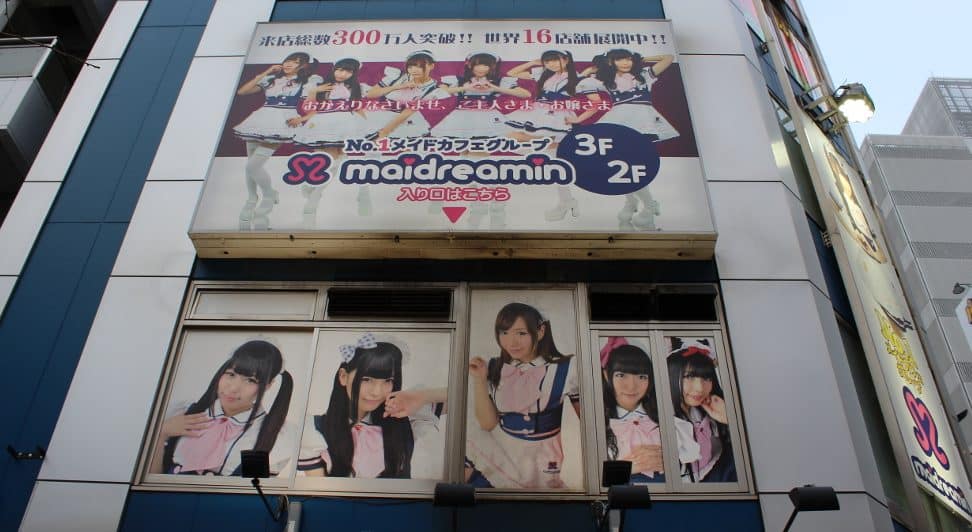 As for the geishas I told you about in Part 1, even around Maid Cafes there is a lot of misunderstanding and often people tend to think that these places are a kind of disguised “Red Lights” places. I don’t know if there actually are such a peculiar kind of Cafes (you know, I was in a family trip, after all), but the one I visited was definitely a place where my kid (and my wife) could safely stay. Maid Cafes are just a way of entertaining people with more culture (萌え) a term which revolves around the feelings of strong affection mainly towards characters in anime, manga, and video games. A PS Vita game, called Moe Chronicles, was reviewed months ago on this very site. As you can see from the real picture I shot and from the screenshots taken from Steins; Gate, we are often dealing with girls in maid clothes and a cat-like behaviour. The moe queen in Steins; Gate, for example, was actually named Faeries Nyan Nyan, where “Nyan” is the Japanese onomatopoeic sound for the English “meow”. As for geishas, you are not allowed to take pictures of the girls inside the restaurant, so please take the following ones as a very close example of what you may find.

Maid Cafes are family fun and the girls entertain you with various games and activities. You can also dress up like a maid yourself, but I honestly skipped that part… Even the food in Akihabara follows specific themes, and the plates we’ve been served there were all moe and kawaii style… 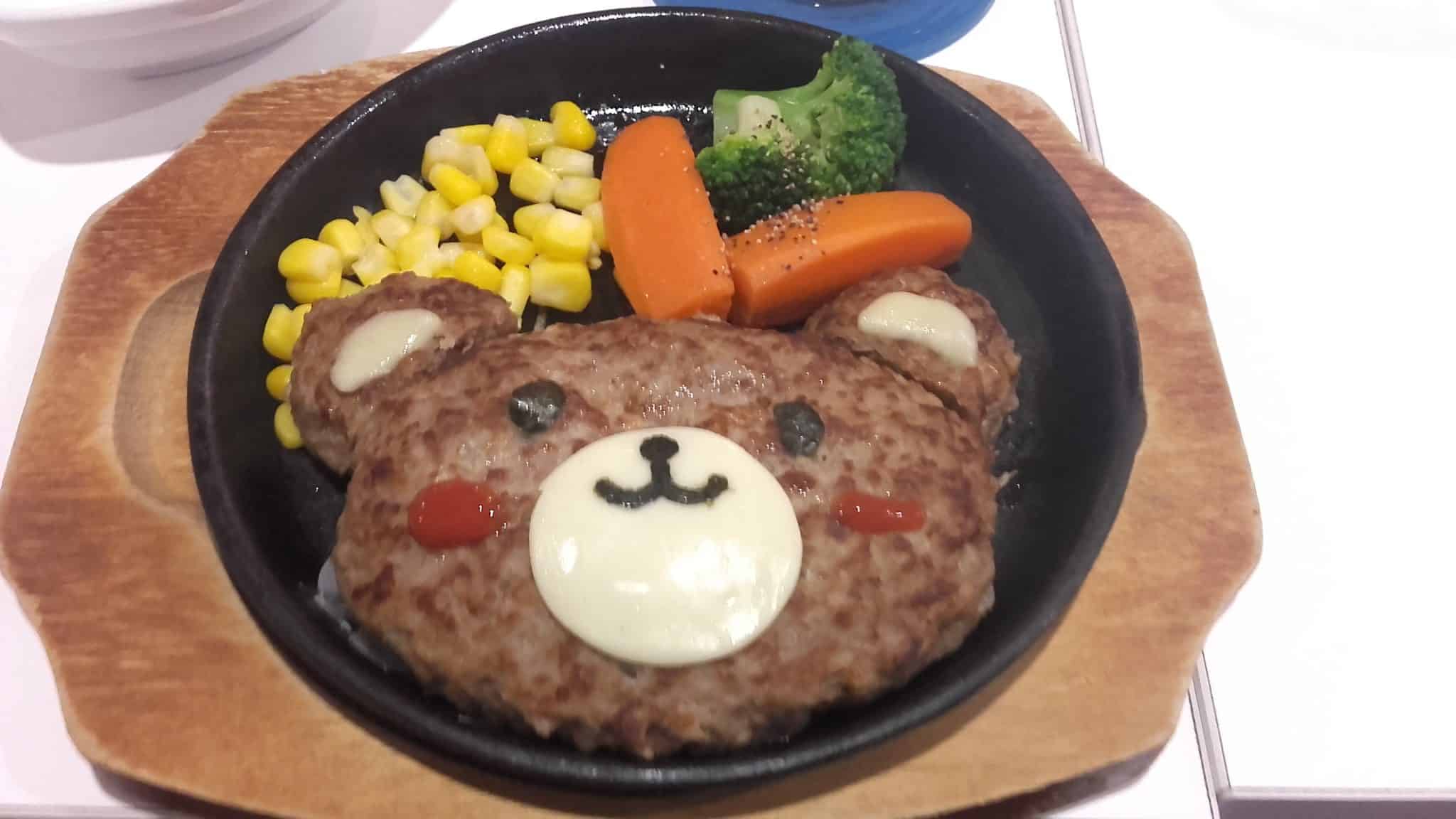 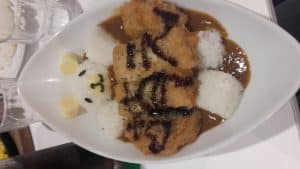 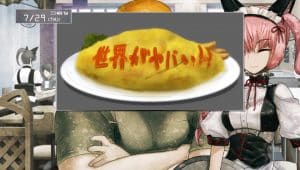 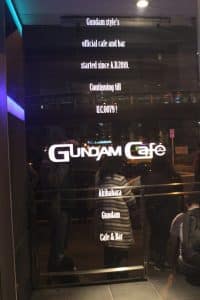 During the following days the drill was pretty much the same: first, raid on any possible store in search of games, figurines and such; second: deserved rest in a restaurant of choice. It’s needless to say that if the first restaurant was the Maid Dreaming, the second one was the Gundam Cafe… Gundam is another one of those Japanese products that became a worldwide icon. This reputation is very well deserved, since this space saga of the ’80 is one of the most realistic and intense of the entire Japan animation (IMHO). Here in Italy other robots are very well known and extremely loved. Basically, all the robots invented by Sensei Go Nagai (Mazinger, Grendizer, Kotetsu Jeeg and such) are very popular even today, mostly because they were the first Japanese products that hit our peninsula. Don’t get me wrong: Go Nagai really is one of my all-time favourite mangakas, nonetheless, his production mostly depicts invading aliens or returning ancient Earth populations. Such scenario, albeit intriguing, is purely fictitious whilst Gundam is based on a story that, although at the moment still distant in time, could realistically be around the corner in a not too distant future.
And here it is, the special gourmet that feeds the Newtypes from A.D.2010 up to U.C.0079!

And then there was all the rest, the Otaku Culture in all it’s different aspects, like people riding go-karts dressed like in Mario’s games…

“retro toys” shops, filled with action figures of past (and present) tokusatsu series, like Ultraman, Kamen Rider, Godzilla, Gamera and all the likes.

I actually did not buy many comics or figurines, but the one I found was invaluable to me. Nowadays all the specialized stores are literally overloaded with stuff about Pokemon, Yo-Kay Watch, One Piece and others, but this beauty is pretty rare and I got it for only 500Yens (4 Euros). Of course, it is Kyashan (キャシャーン) from Tatsunoko, and you know I love it … 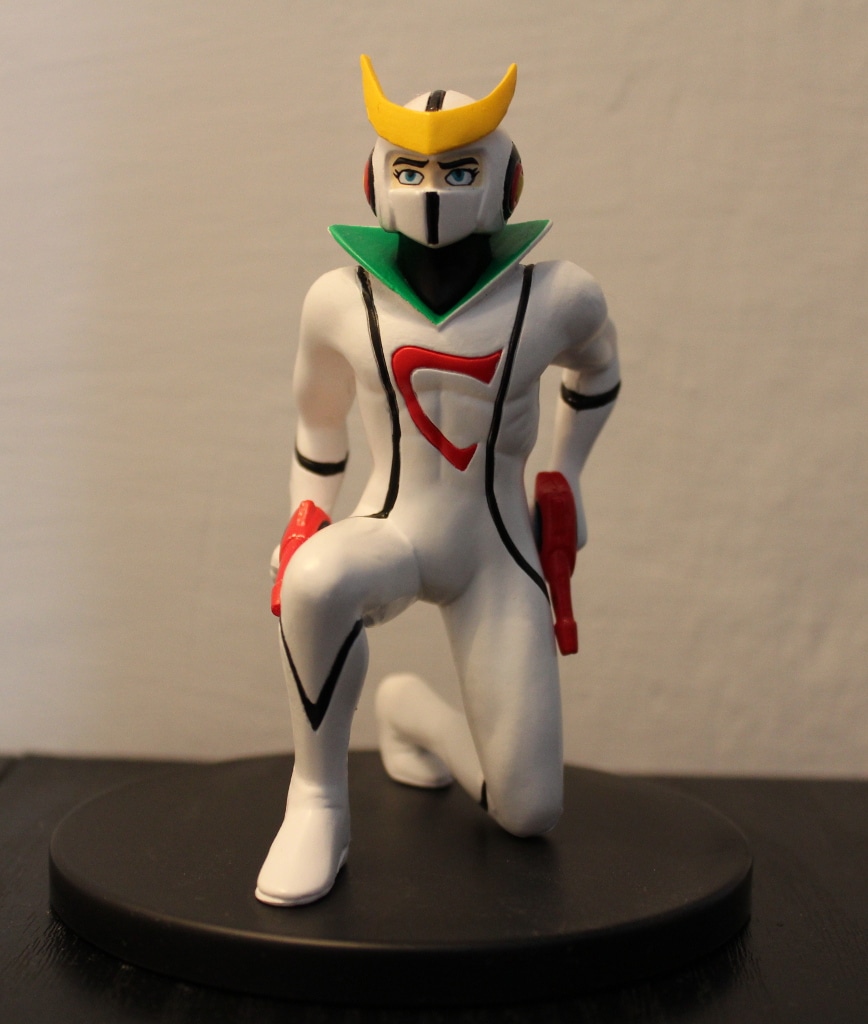 Here are other figurines I got: the first one was priced 800Yen while Ultraman came actually out from a Capsule Toy dispenser and I got it for 300Yen (roughly 2,50Eu). 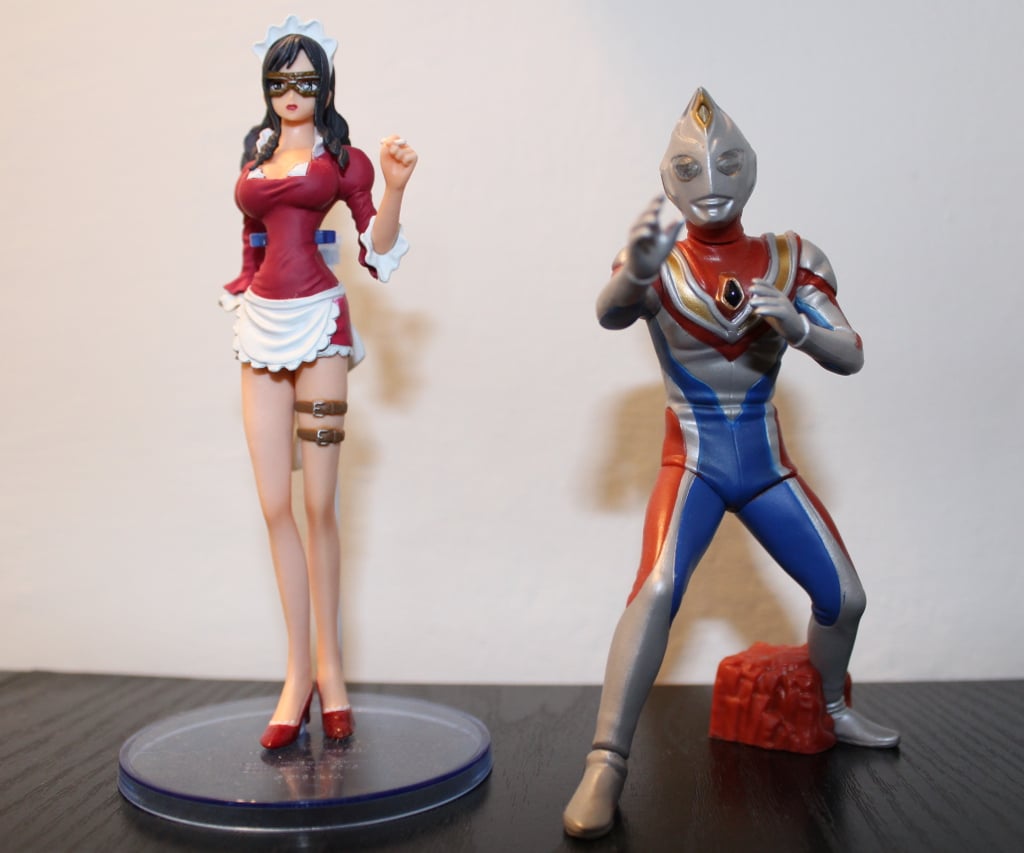 And here is part of my son’s loot. He’s definitely on the right way, don’t you think? 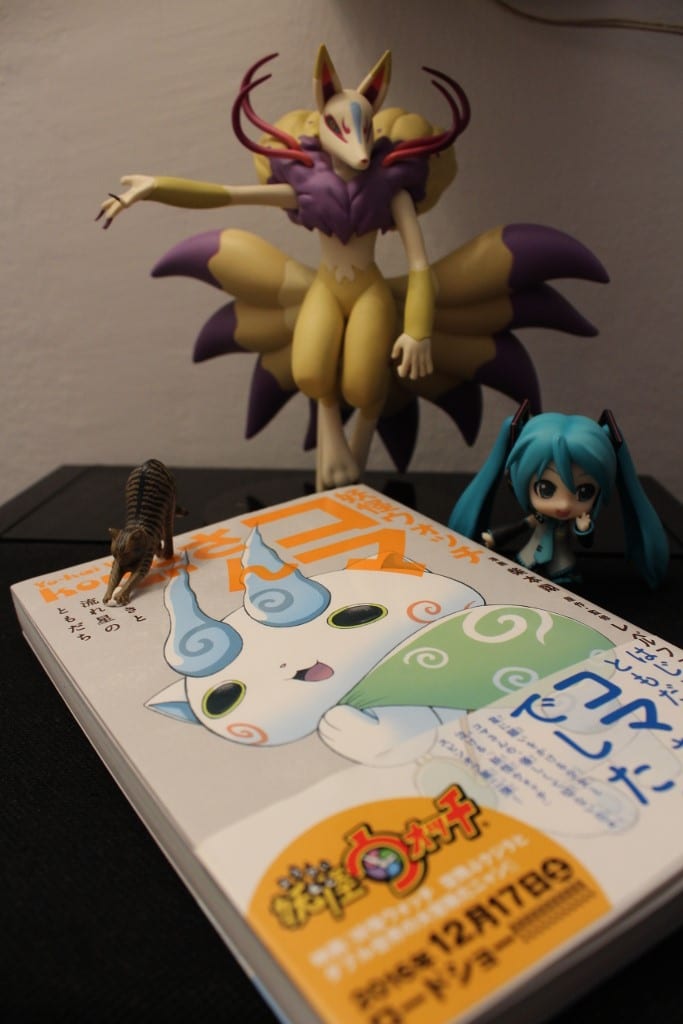 The following pictures show another retro store and the super famous Toranoana, that basically is for comics what SuperPotato is for retro games.

And so, after gaming and models, we have reached the manga part. In Japan, everything is very “visual” and you can here appreciate a manga-style book, that actually is a very technical manual on different martial arts, featuring diagrams and algebraic formulas…

Finally, I could not help buying these two gems: the one on the left is a monthly magazine for hobbyists (from garage kits to the super technical perfect grades), this time mostly dealing with the latest instalment of Leiji Matsumoto’s Spaceship Yamato; the one on the right is the famous magazine Famitsu Weekly, definitely a videogamers’ bible and in this issue focused on Koei Tecmo Stars. 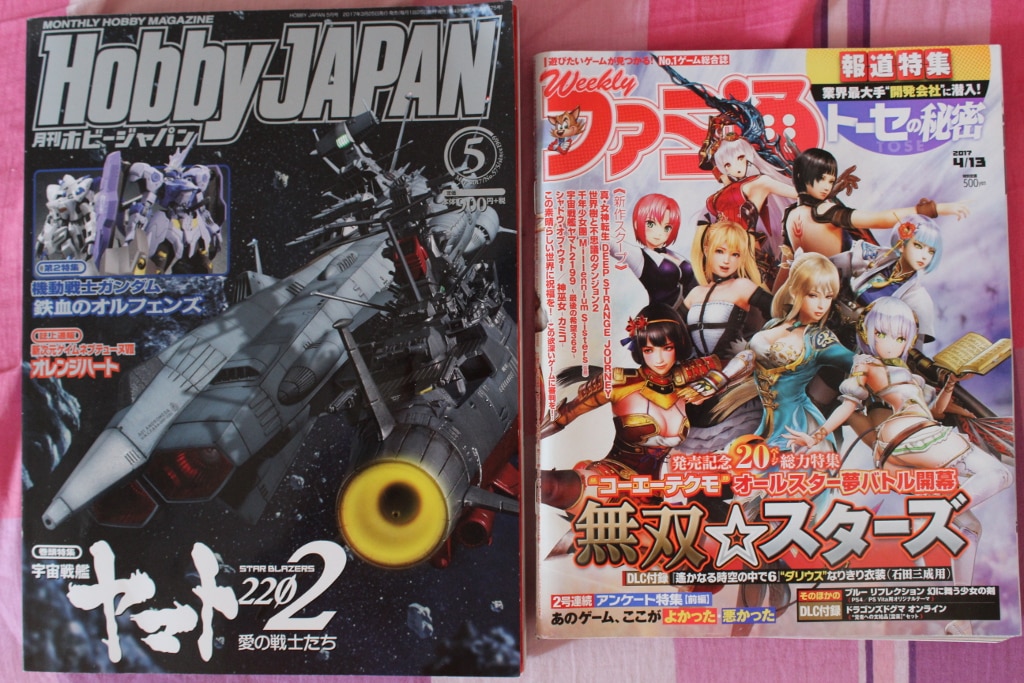 At the end of Part 1 I ended the article with a dilemma: which was the best part of the trip? Did I like “classic” Japan the most, or is “modern” Japan the best place to be? Was it better to stay in Kyoto, historical and elegant, or in Tokyo, where everything is possible and there are millions of opportunities? As a matter of fact, this first trip was only a two-week long, which is likely a very short time span to get to a real conclusion. Furthermore, Japan society is usually a very “close circle” and foreigners are often called gaijin, that literally means “outside person”. Even if the term is not necessarily used in a bad way, it is a fact that it is not always easy for a foreigner to get accepted and to adapt to such a different lifestyle. So is Japan my true Promised Land or not?

A few days ago I was talking to a friend of mine, who lives in Cairo, and has a passion for ancient Egypt very similar to the one I have for Japan. Her words actually struck me and, without even knowing it, she basically wrote the end of this article. So here is my conclusion: this journey to the East made me go back to my “natural state”. I believe I lived for this trip from when I have memories, and finally setting foot over there has been like getting out of a shell and starting to live again. It didn’t actually matter where I went, and it will not matter where I go in the future. Japan is where I’d like to stay. Despite not knowing the language and not being able to speak or read, I finally understood what I am: a piece of the puzzle finally fitting into place.

Before closing up this last article, please take a look at the following drawing: it was done by Meteosnow, an outstanding Japanese artist, who agreed to create this Amigaguru’s Blog exclusive content. I believe she perfectly captured what I had in mind, and I’m sure that she has now set a new standard for my dreams. In addition, she is a very affectionate fan of the upcoming PC game Tokyo Dark, and you can find another of her awesome works here. 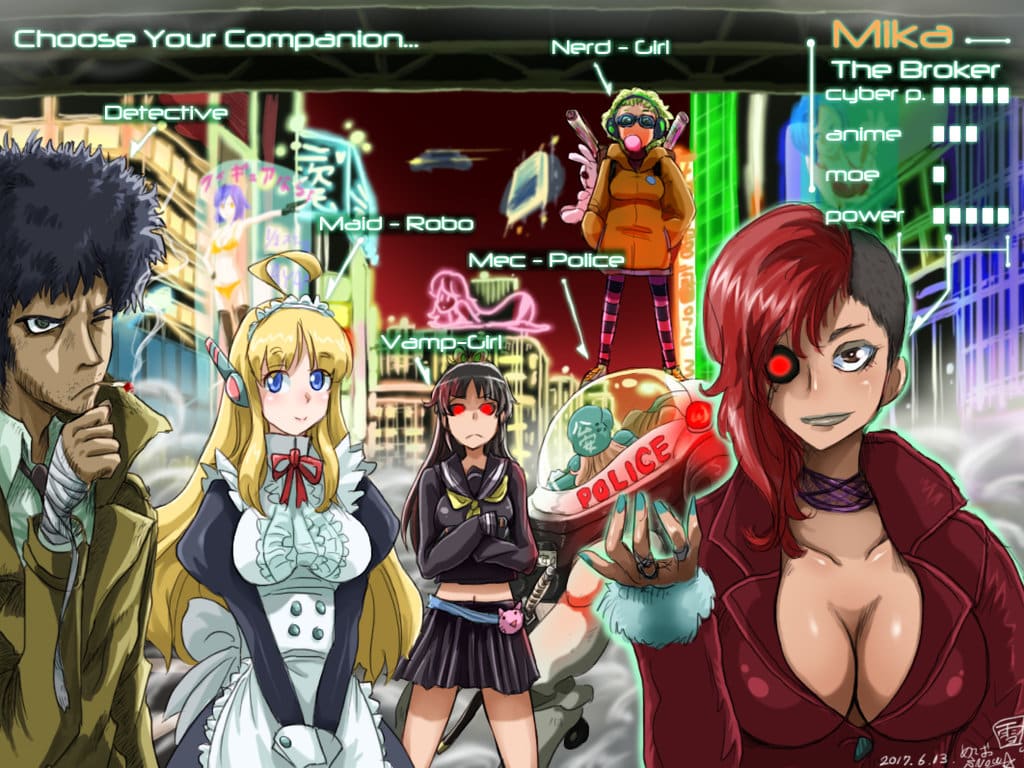 I do hope you guys enjoyed reading these articles as much as I enjoyed writing them. Thank you for reading and, should you plan a trip to Japan and need a piece of advice, you know where to find me.