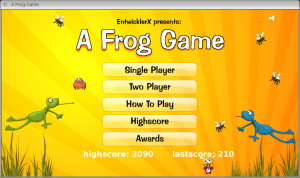 Today Amiboing.de and EntwicklerX released a new game called A Frog Game for the AmigaOS 4.1 platform, a mere week ago they released a game called Tap Jewels so by the looks of things they do seem to be on fire at the moment.

A Frog game is a simple game, the rules are simple and the gameplay is simple, the game is about eating flies while jumping from one side to the other side of the screen. 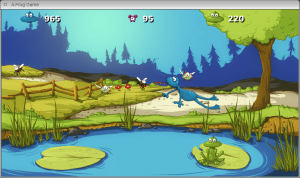 The gameplay is focused on how much you can eat before the timer hits zero, it can be a long round if you manage to pick up all the bonus clocks or it can be a very short one if you suck at the game.

There is a different “eat’ables”, a sick fly which makes your frog very sick and immobile for a while, a “fat” fly which gives you a 2x option and a fly hanging onto a clock which will give you a little bit more time.

You can choose if how much you want to eat while jumping by clicking the Left Mouse Button while jumping so you don’t have to eat everything you hit when you jump. 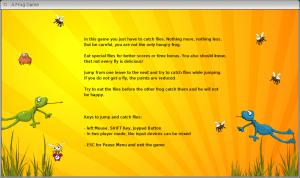 The game has a splendid music track, made me laugh out loud when i fired the game up the first time and i am 100% certain that they had a brilliant time doing that song :-D.

As like most if not every game from amiboing.de and EntwicklerX the game provide good graphics, solid sound and good casual gameplay along with Achievements and Online Highscore tables (amiboing.de, please let others join your project! and make it a standard!) which makes their games stand out from the crowd.

My son Sebastian enjoyed the game, we played it quite a bit in 2 players already but he is 3 years old and might not be the best critic in the world…