A new OutRun clone for the Amiga? , only beta versions available so far, and yet a “collectors edition on the cd was released to gamers out there”?

So is it any good?

Amiga Racer is one of those games that have been in development for quite a while due to being an indie and spare time project.

I have been following the facebook page for quite a while now and it ain’t hard to see how the developer is focused and have control in regards to the project.

New versions keep on being released, fan requests being some of them. 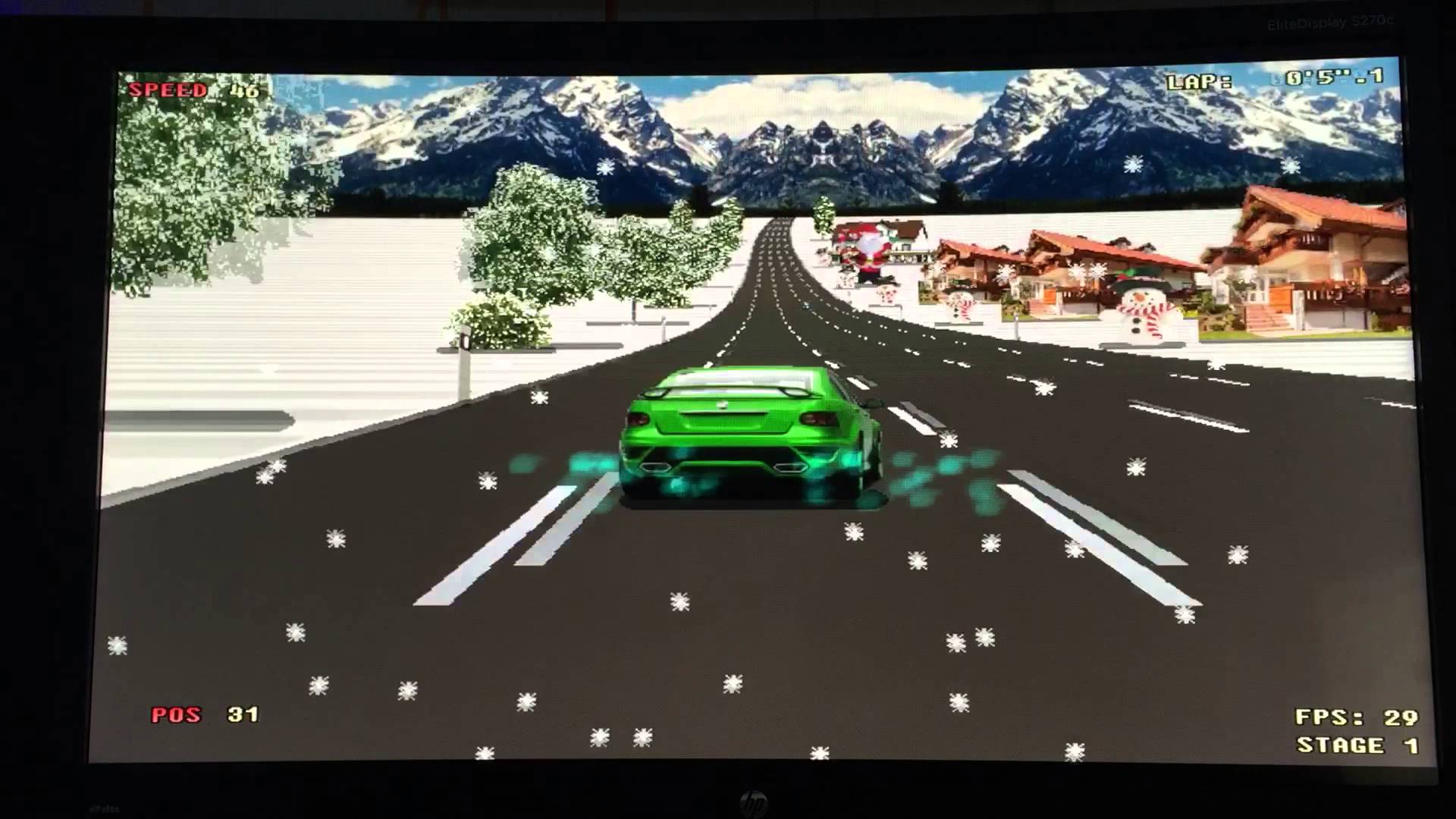 The game is quite ok looking together with a very good frame rate on most PPC Amiga’s out there.

It ain’t hard to see how the project aims to be something in the style of Lotus or OutRun.

When looking at the picture above you will spot one thing that keeps being mentioned on forums/facebook, and that is how the car is placed.

The placement of the car is in a way that makes it annoying and easy to spot animation problems and the angle of the car itself. 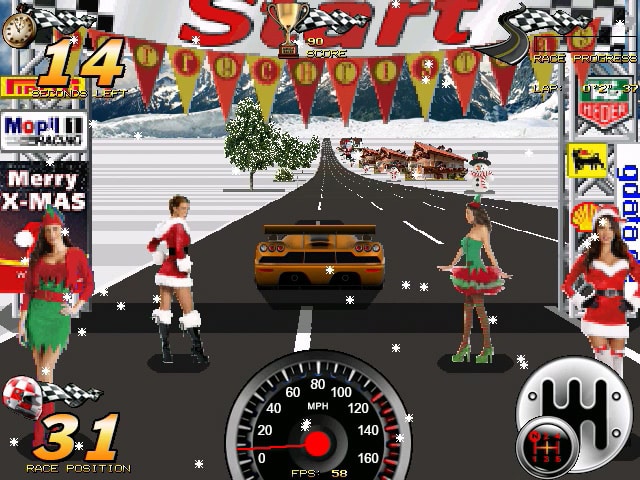 Various versions have been released, for instance, this Christmas edition, quite cool that the developer has thought about this, the graphics on the picture above looks a bit pixelized but when in movement this ain’t really a problem.

When it comes to the sound of the game the game has quite a few songs as well as an ok enough sound fx selection. 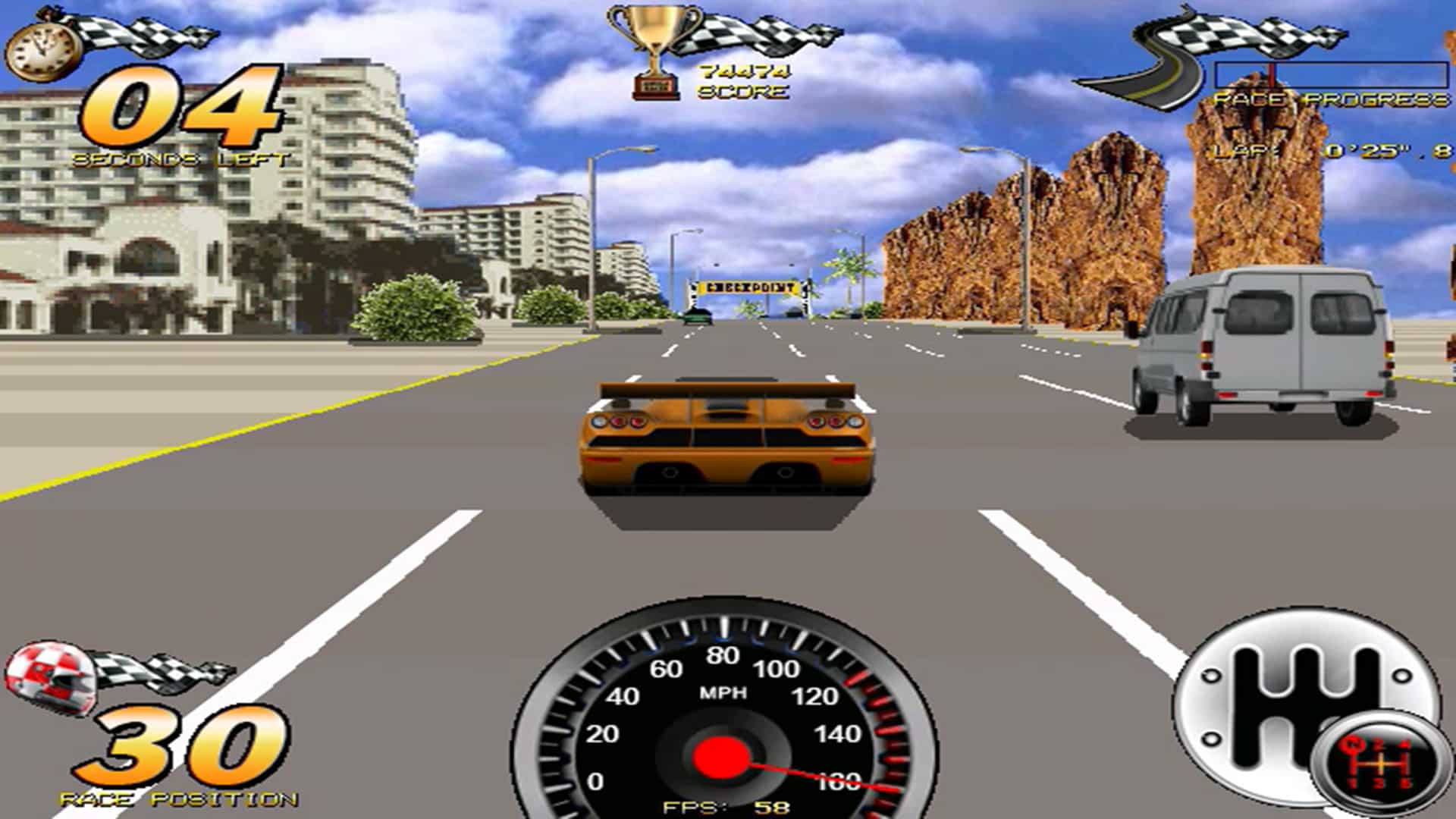 I won’t bitch about the game all that much because i know it is still in development and that it will get better with time as the developer is dedicated and positive about continuing the project.

The controls of the game has a few hiccups here and sadly one of the things that made me switch of the game the first time, an example is when you go into a turn and try to maintain control of the car – then you end up crashing on the other side of the road when the turn is over due to the engine/game design not understanding the placement and speed of the car. -.  This is hopefully one of the things that will be solved in later versions. 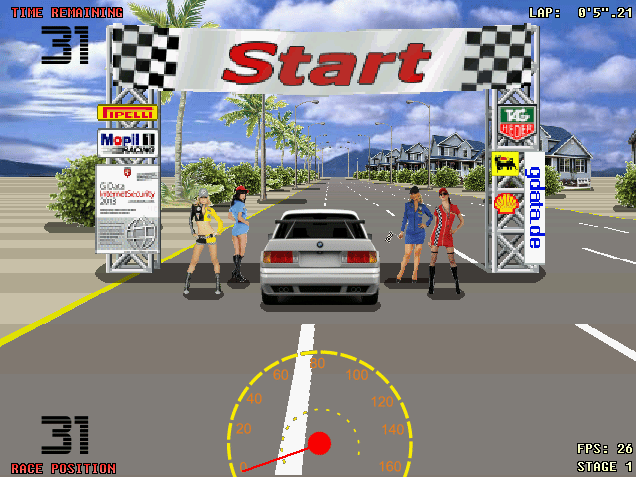 I have fired up the game quite a few times since the first few betas, and i can safely say that there has been a lot of progress. I will continue to play the game and try to support the developer as much as possible in the future.

There is a wide selection of cars in the game although there are not many tracks on it, the ARCS construction kit will satisfy some people out there for sure, not me so much as this was one of the reasons i did not like Lotus III (Lotus 2 being one of my top 50 games on Amiga).
Ok, enough about the game and over to the collector’s edition. 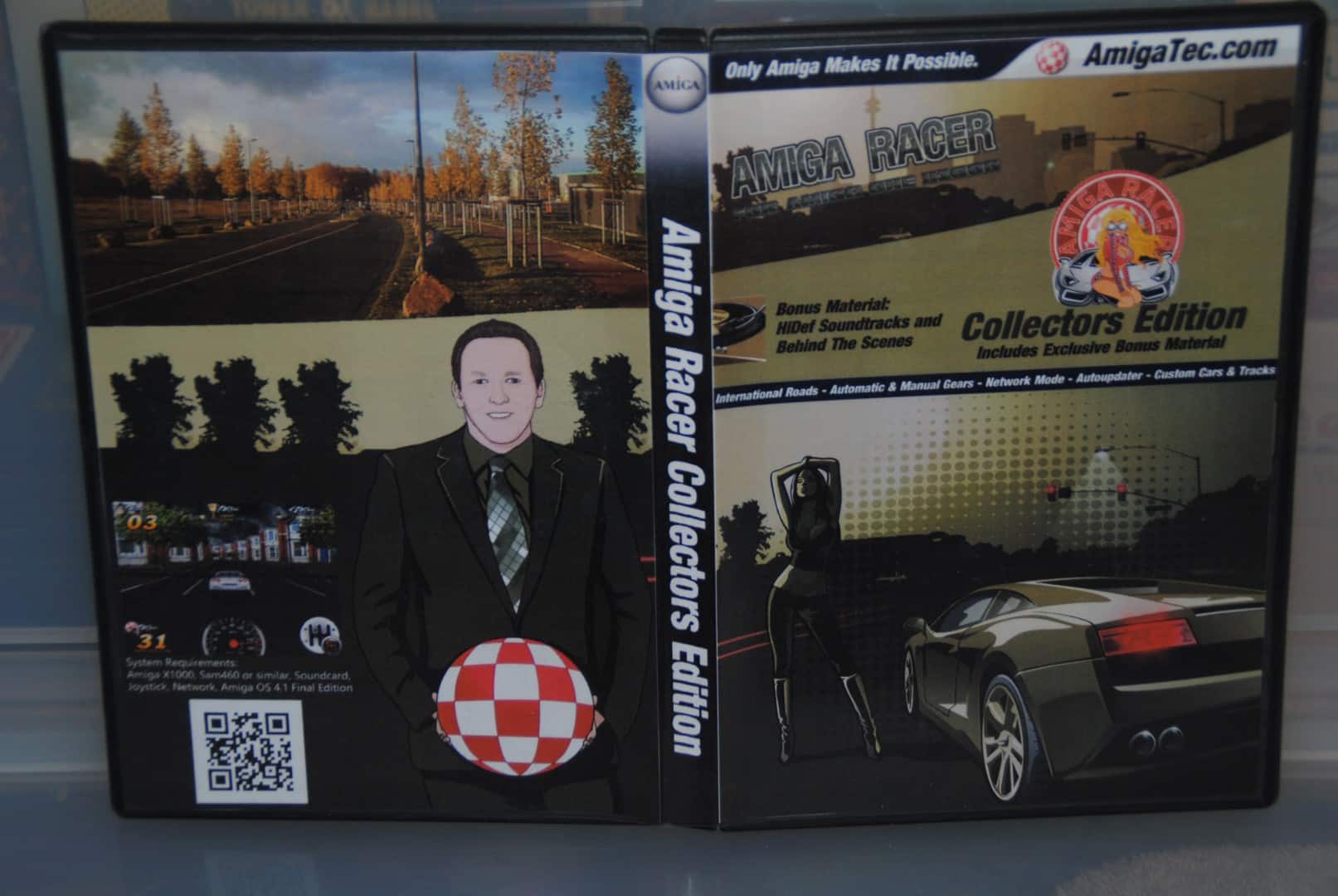 The CE edition comes in a good DVD case, not sealed although i did not expect that since it is an indie game and there being personalized bonuses and it being handmade etc.

The best thing about the box is that it is cheap and will turn into a collectable over time i hope, not many copies produced and hopefully a second run will not be done unless it is a later version of the game together with a new box etc. 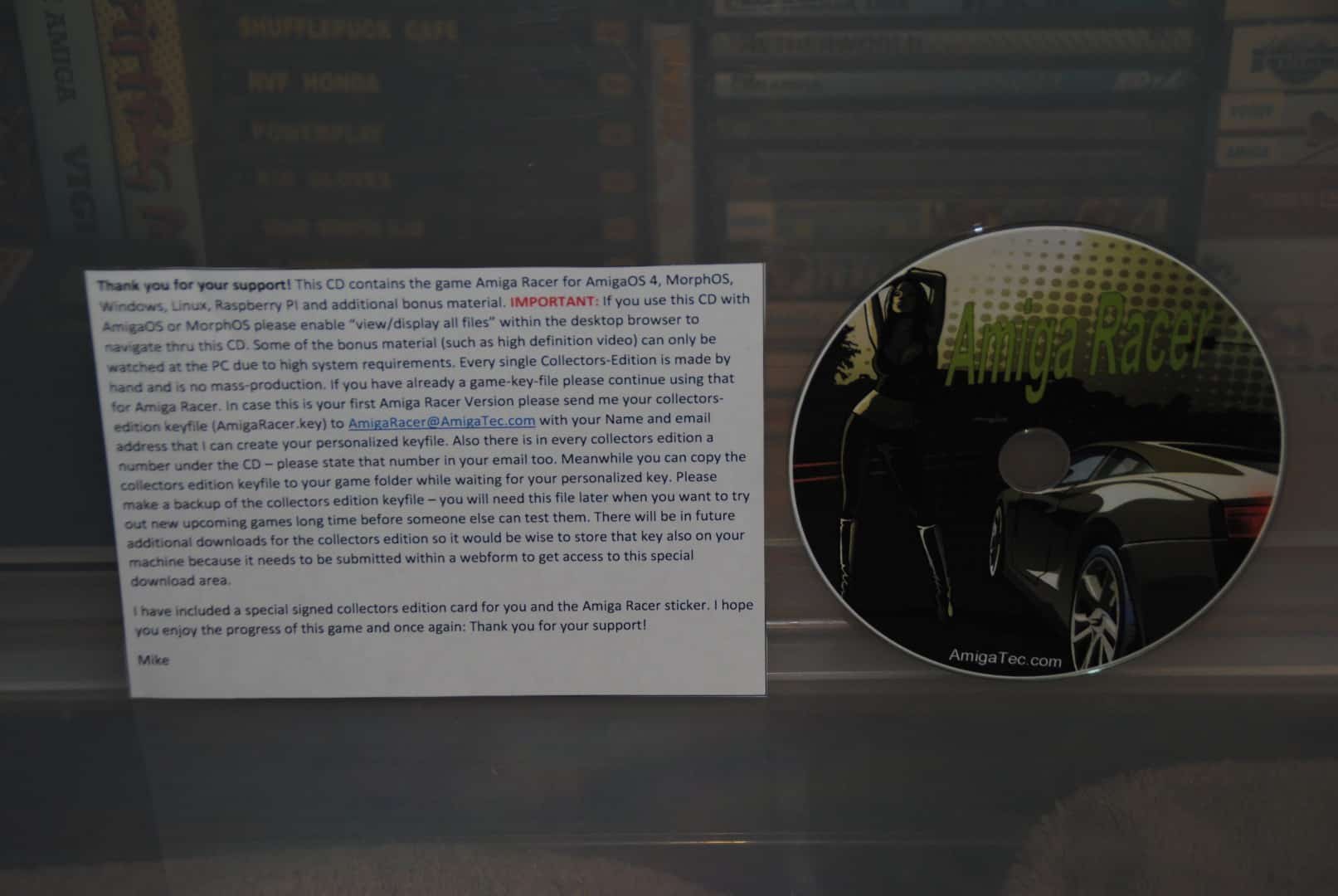 The cd is a normal CD-R, not marked in any way except for a printed label.

Good looking CD although the manual /inlay “wasn’t all that”. 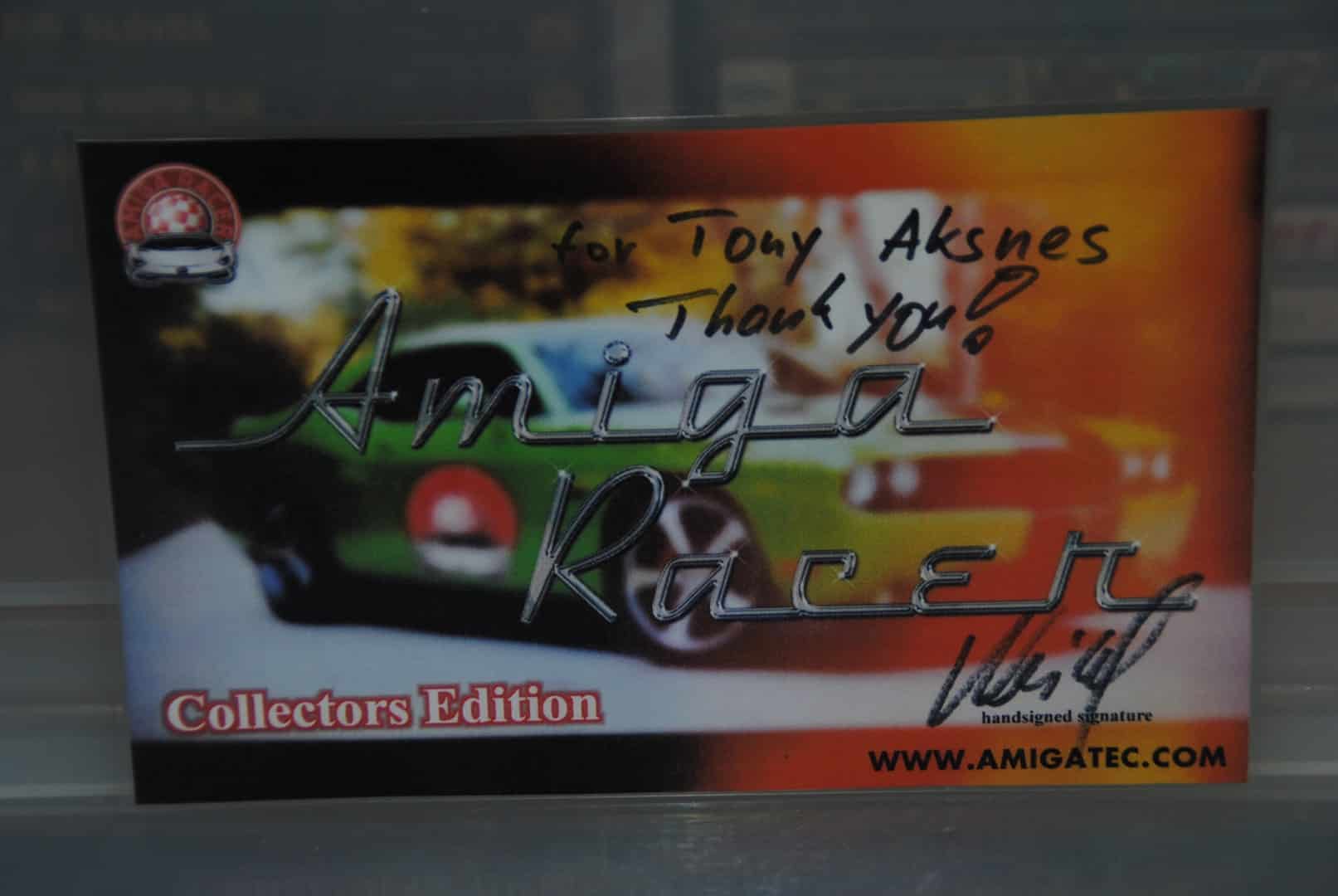 Personalized CE card inside, unexpected to be honest,

A very nice idea by him and definitely a big plus in terms of satisfying me as an Amiga collector.

The print of the card is of good quality and the picture suits the game perfectly. 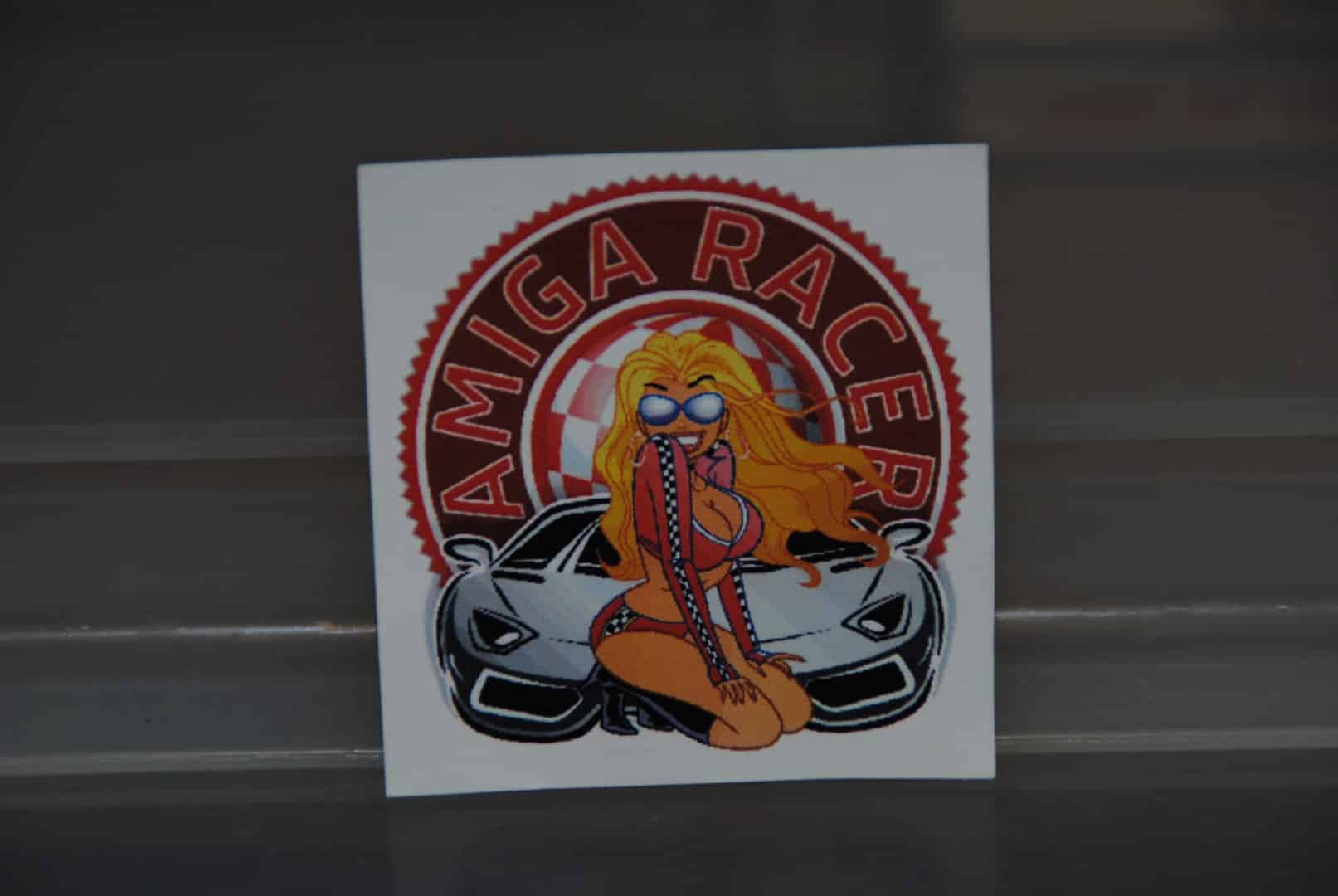 A small sticker is included, great looking and of good quality too.

I never use stickers bundled in game boxes but as a collectable, it is worth it and something i appreciate a lot. 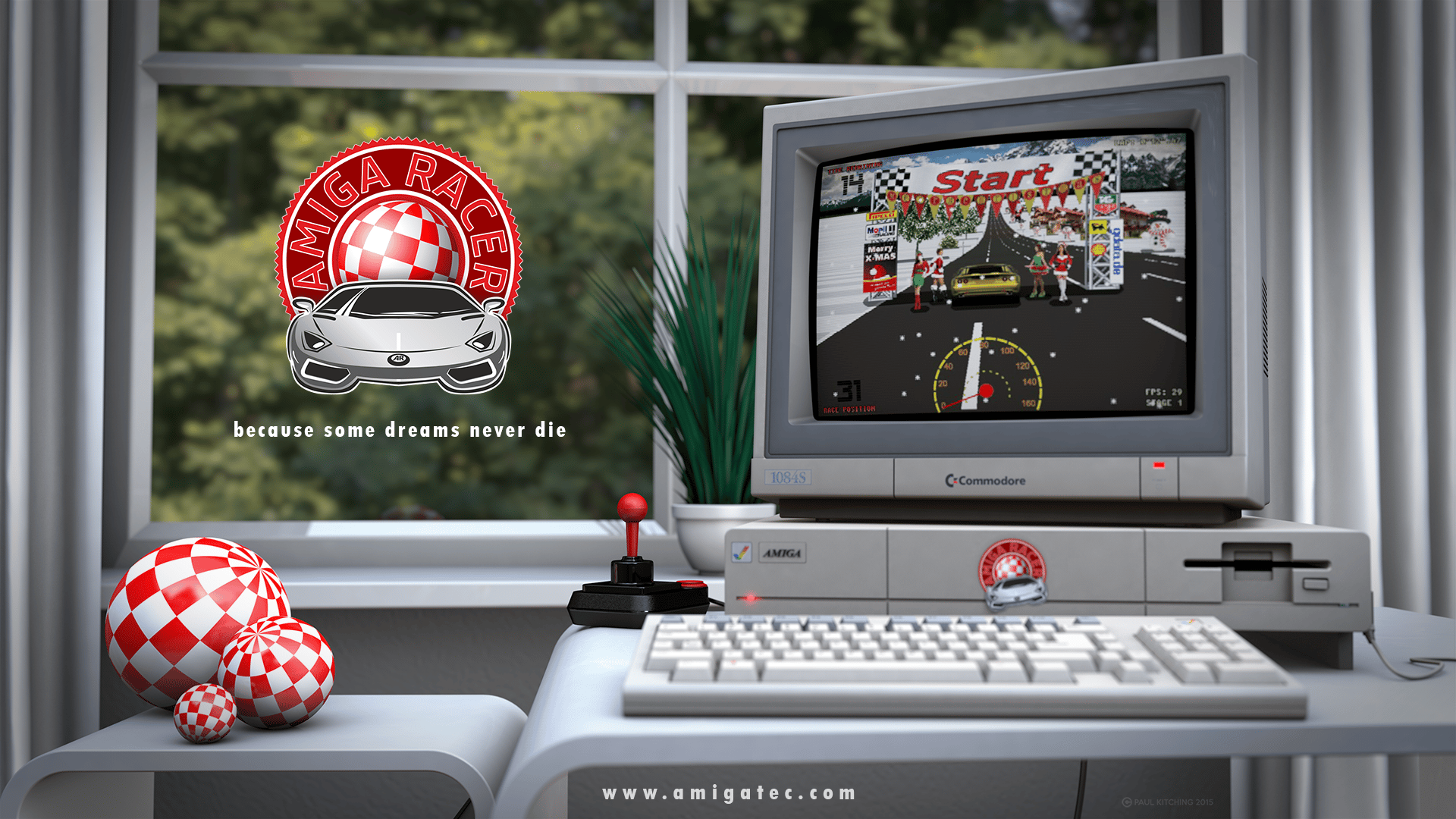 Look at this render! it looks amazing.

Ok, so what is my final opinion of the game then?

The game is a good start when it comes to a potentially great game over time, i am sure it will require quite a bit of work to finish it although it will be worth it for both the developer and gamers out there.

The main problem in the game ain’t the engine, but the gameplay and as a games developer and beta tester for many big projects, this project has good potential and

one that will succeed with time.

If i was to suggest something then it would be a Kickstarter to raise funds which could be used to finish the game faster than being a donationware game.

6 thoughts on “A Look At Amiga Racer Collectors Edition”