It is no secret that I love driving games, especially arcade racing where the focus sits at aggressive, dangerous, chaotic and maybe most of all flat out racing and now that Three Fields Entertainment  (3FE from now) finally got around to do something more than “just” the Burnout Crash Mode (The Danger Zone games) thing and actually trying to put out a proper Burnout contender, well, colour me interested.

This is where you will most likely go something in the lines of me being biased towards both the team and the franchise but yes the guys in this tiny team (of just 7 developers) used to be part of the Burnout team and or as the Criterion’s in general, and yes I have asked many times for a new Burnout game over the last few years so this is a dream come true. 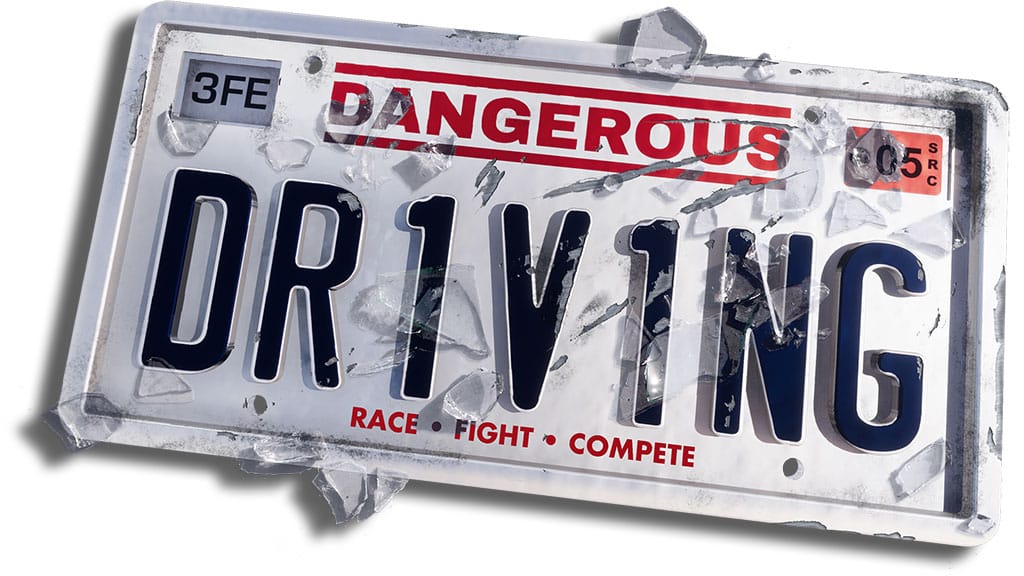 First of all, let’s cut to the chase… Is the game any good? Does it look good, is there rubberbanding and is it anything like Burnout at all?

Short answer: Yes to all, it feels like a trip down memory lane and it delivers just what I expected it would do.

Long answer: the rest of the writeup… 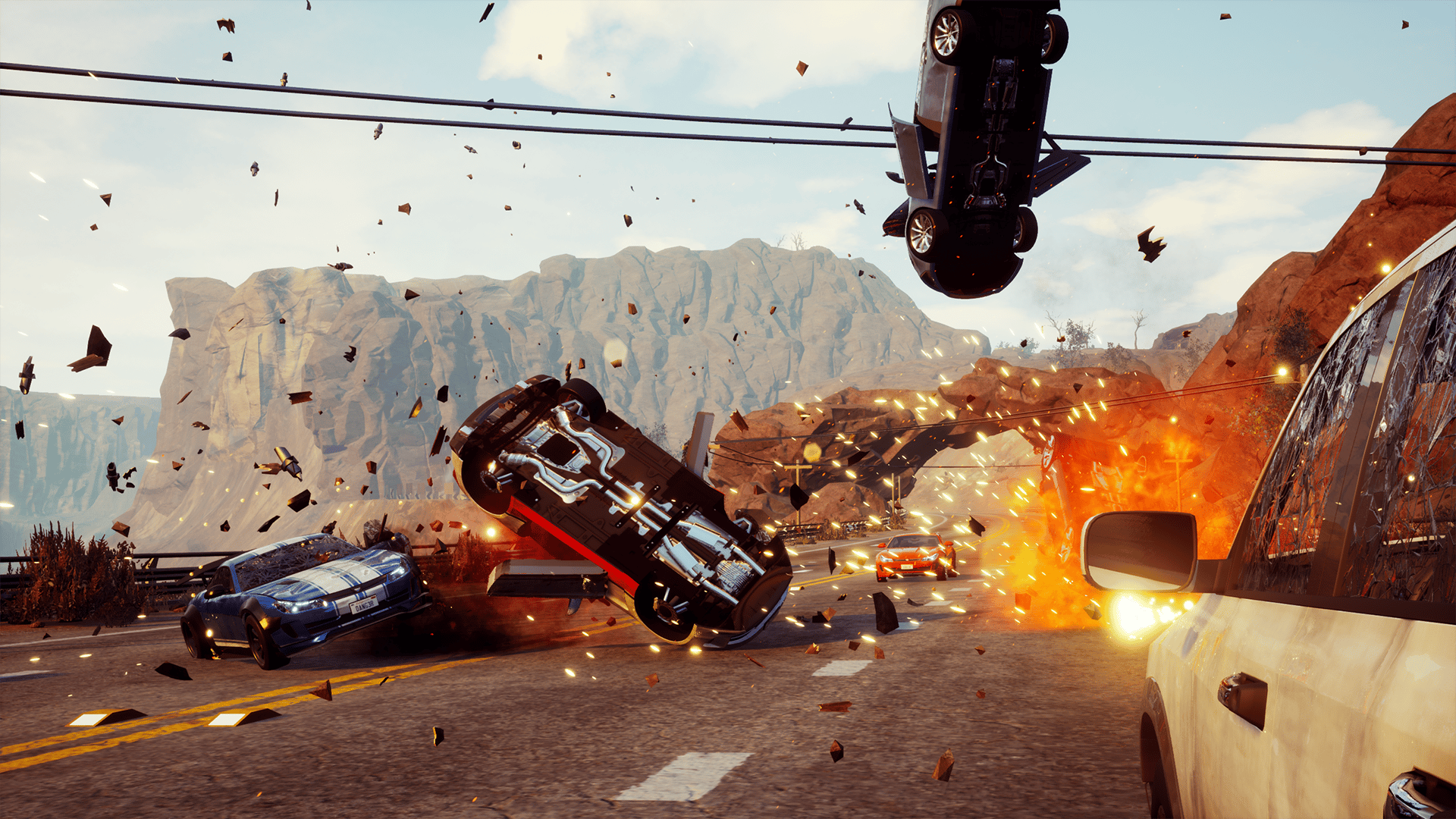 The thing with Dangerous Driving is that no matter how hard the developer would try there will always be people that will never understand how hard it is to deliver a full-blown arcade racer in this day and age, people will always want better graphics, different gameplay or whatever and yes, Burnout is one of those franchises that carries a lot of love and hate from the fans and therefore it is impossible to win everyone over no matter what.

I had fairly low expectations to this new game really as I was one of those who got burnt really bad with the first Danger Zone game but I still went on to play Danger Zone 2 which was a much better game but still far from fantastic or even good for that matter, but the thing is that every single game from 3FE got something special to them and it is almost like if you can feel it, these guys make special and worthwhile games.

The video here shows pretty much everything you need to know about the game really, it is blazing fast, it’s hard to see where to go and you will most likely crash into oncoming traffic without even noticing it before it is too late.

The question is though, is it too hard or is it bad game design? I like hard games but hate bad design and Dangerous Driving is one of those that I first thought would need an update to fix some of its faults.

A third camera view (there are only 2 views now, bumper and behind) which would have been higher and behind the car might have fixed some but I am not so sure it would have made the game easier… which brings me to the track design. 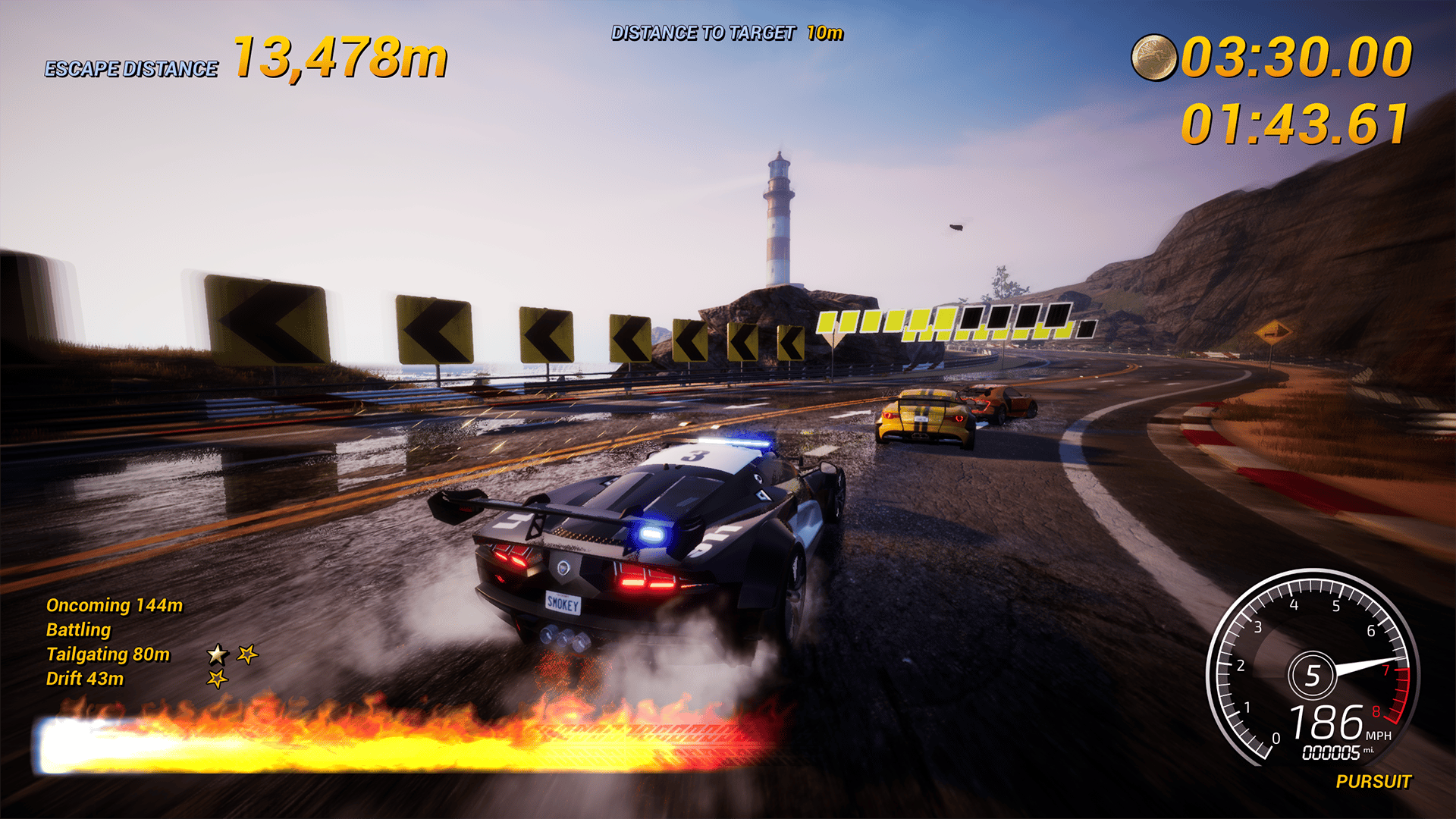 I really enjoy the visuals and style in Dangerous Driving but there’s one thing that I hate with it and that is when you go blazing fast and try to read the road ahead by looking at the signs and what not, the camera angle doesn’t help indeed, but if you look at the picture above then you will realize what the largest problem is… the goddamned roadsigns are wrong and for me these things are crucial.

it might not be much of a problem to others but I like to drift into turns and not just grind my way through them on the fence/railing or whatever.

Which brings me to the answer how to play this game, at first I struggled like hell to complete the first few levels and when my son (which is 10 now btw) wanted to try, I only managed to say “it’s quite difficult” before he started his first attempt, he did like 3 races straight without failing and looked at me proudly and said – Look dad, I beat all your race times and got gold and platinum race times.

I was in shock and awe of course, mostly because I was watching him racing and how amazingly good he played but also the way he used the boost button, no, he didn’t cheat but he played it totally different from me by taking things a bit slower and not overusing the boost all the time.  My reaction was more or less “HEY! that’s not how you play Burnout!” but heck it worked and guess what this showed how limited the AI is in this game, for some odd reason the AI never uses the boost if you don’t use it and therefore you can take the races a bit slower and you will most likely crash less too because of it…

Rubberbanding comes in many flavours but the one used here is far from optimal sadly.

All of a sudden I figured out how to play the game, but with that said it does feel a lot like cheesing my way through it instead of playing it how I should have done, I hope this will be addressed eventually but if not in this game then in the sequel (if ever).

Dangerous Driving features a lot of game modes (9 different ones) from the first 3 Burnout games and one of the largest surprises for me was the return of the awesome pursuit mode from Burnout 2, some might know this mode from Need For Speed Hot Pursuit or even the game where it all started, Taito’s Chase H.Q. from 1988.

Chasing bad guys with a police car is always fun and best of all is that here you get to chase down several of them at the same time and while it might sound very familiar to the Road Rage mode it still manages to differentiate itself due to the vehicles you chase got an energy bar as well as they don’t just respawn all over the place. 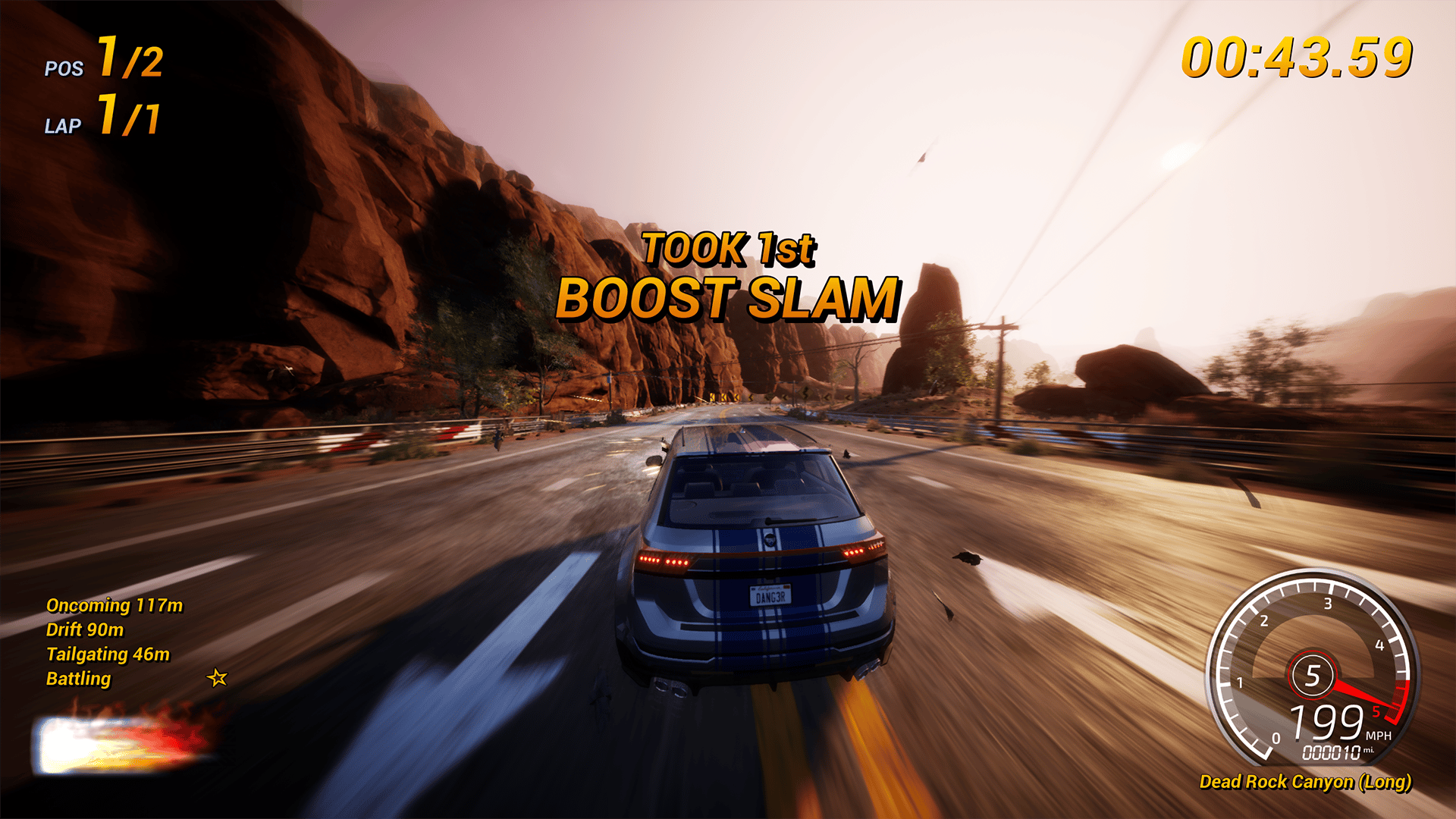 Dangerous Driving features 69 events and all of them are selected from a menu, there is no free roam mode (thank god) or “auto drive” or whatever you want to call today’s time wasting mechanics, everything is spread out over six different vehicle classes and yes the loading times are minimal (on the PlayStation Pro at least) which means that it won’t be too much of a pain if you crash and press retry right away.

There ain’t any Multiplayer mode right now but this will be added in a free update soon, that said, there are leaderboards and such in place but they’re very limited as you only get to see a few racers in the list (next to your ranking) and there ain’t any way to scroll up or down to see all of the lists, luckily there are ways to see your friends times as well as the number one. 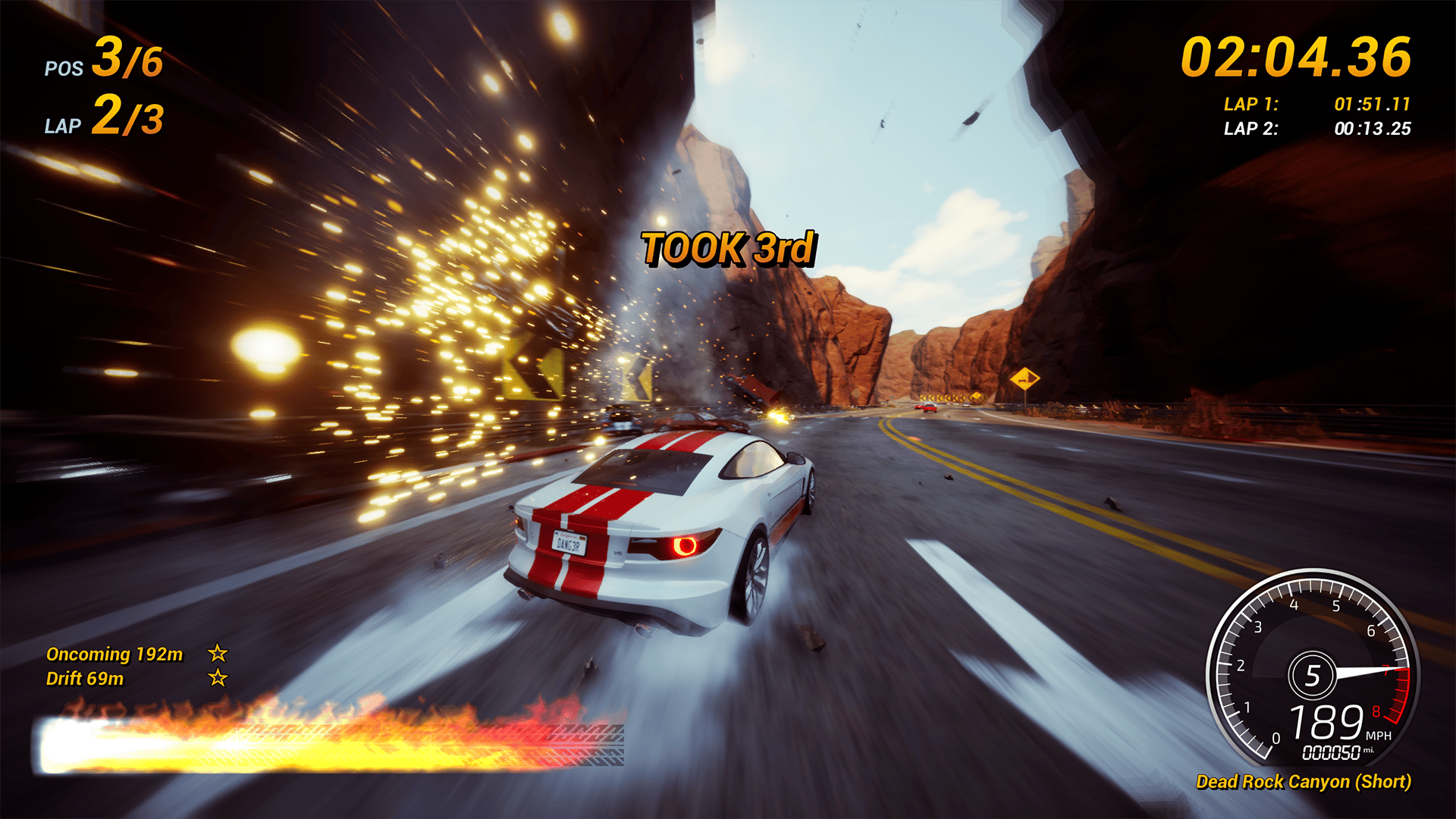 Yes, you have the normal races and you have the beloved Road Rage mode as well as Heatwave and so on, most of them work well but some do drag out a bit, especially the GP races but I never felt that they became annoying but as probably you know by now, a single crash can often lead to you to lose the whole race which means you just wasted(?) 10 minutes of your life, but then again this is how Burnout was back in the day too.

One of Burnout’s trademarks have always been music (since Burnout 3 anyway) and this is another omission (for some) as there ain’t any in-game music in this game, I guess they have skipped this part for music license reasons, the way they have solved this one is by adding Spotify integration (just go to audio menu and select it there, easy peasy, lemon squeezy) and to be honest I think this was a smart move. 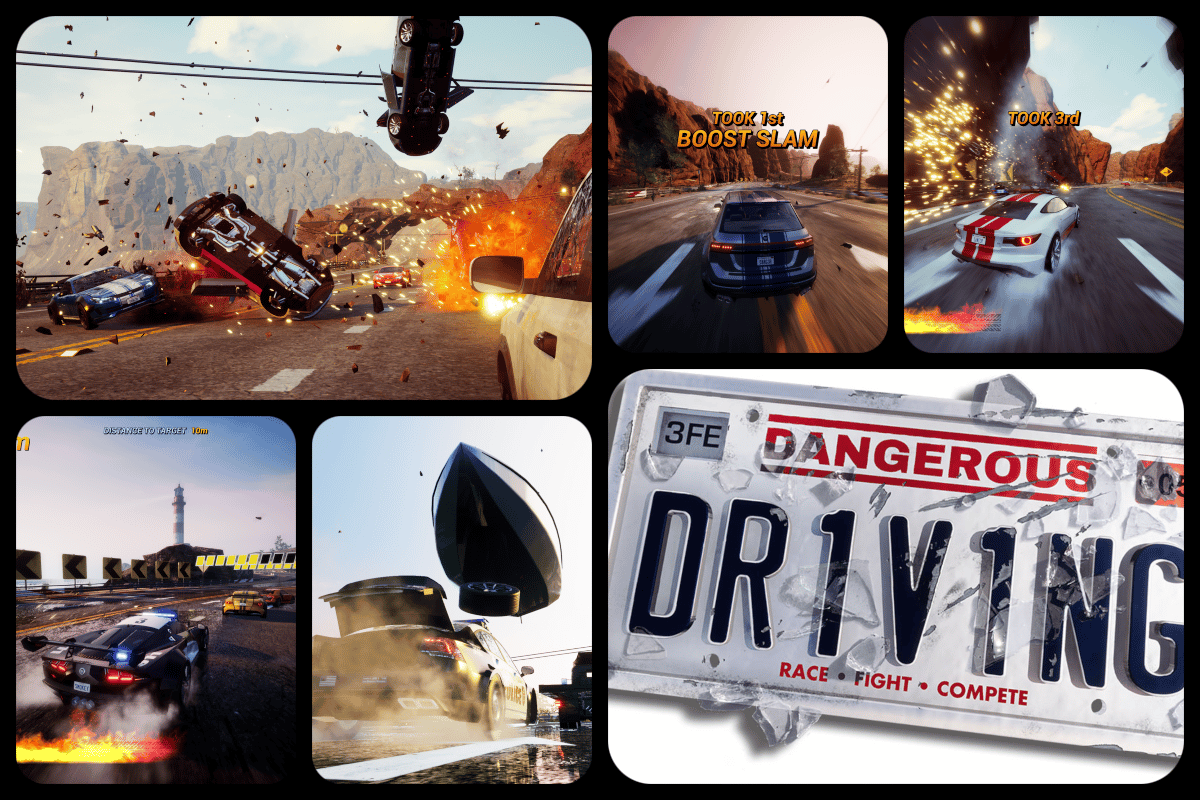 3FE have created a fine game for fans of the franchise and while it could have been a much better game with some of the flaws removed it is still quite interesting to see that they managed to pull such a game off with such a tiny team. Content wise the game got way more to do than I expected and there’s even a Platinum trophy (something 3FE seem to forget in most games) which will be quite the motivator for some people out there. Dangerous Driving is the first arcade racer in a long time that has managed to bring that special “Burnout” feeling back to me and it does it in a good way too, I don’t need Freedrive, padding (story), huge garage of cars, realism, modding or even Crash Junctions to have fun as I want to drift and drive fast, insanely fast and take down other racers!

Rush out and get the game, support them and show that you want more of this, this can be the start of a new brilliant franchise and that won’t happen if gamers ignore this one.

2 thoughts on “A Look At Dangerous Driving – The Revival Of Burnout?”