This is my first Collectors edition article in a while now, the game is actually a wee bit old too now but i decided to put this out there anyway as i know a lot of people out there enjoy my box articles more than many other sites out there.

This is my second Tales game article on the blog and i am pretty confident that this won’t be the last one, the article can be found here:  Tales Of Zestiria Collectors Edition. 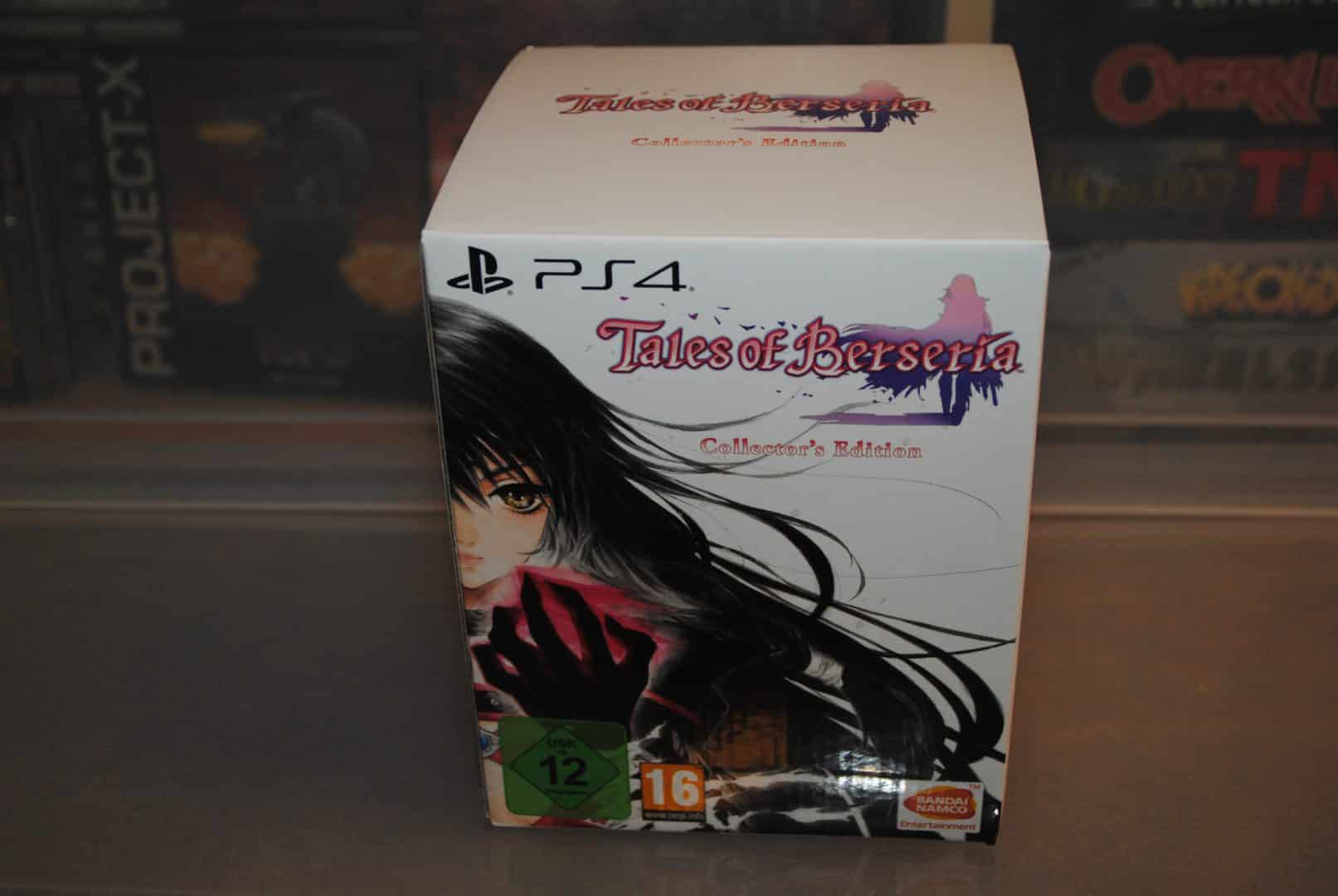 Back in 2015, i was commenting on how boring that Zestiria box looked, and well i kinda take that back now as i have grown to like that “brown book like the approach of it”.

This year’s Tales Of Berseria box is more like the usual RPG box design of the series, and as seen above, it is quite good looking if not very trendy and typical. 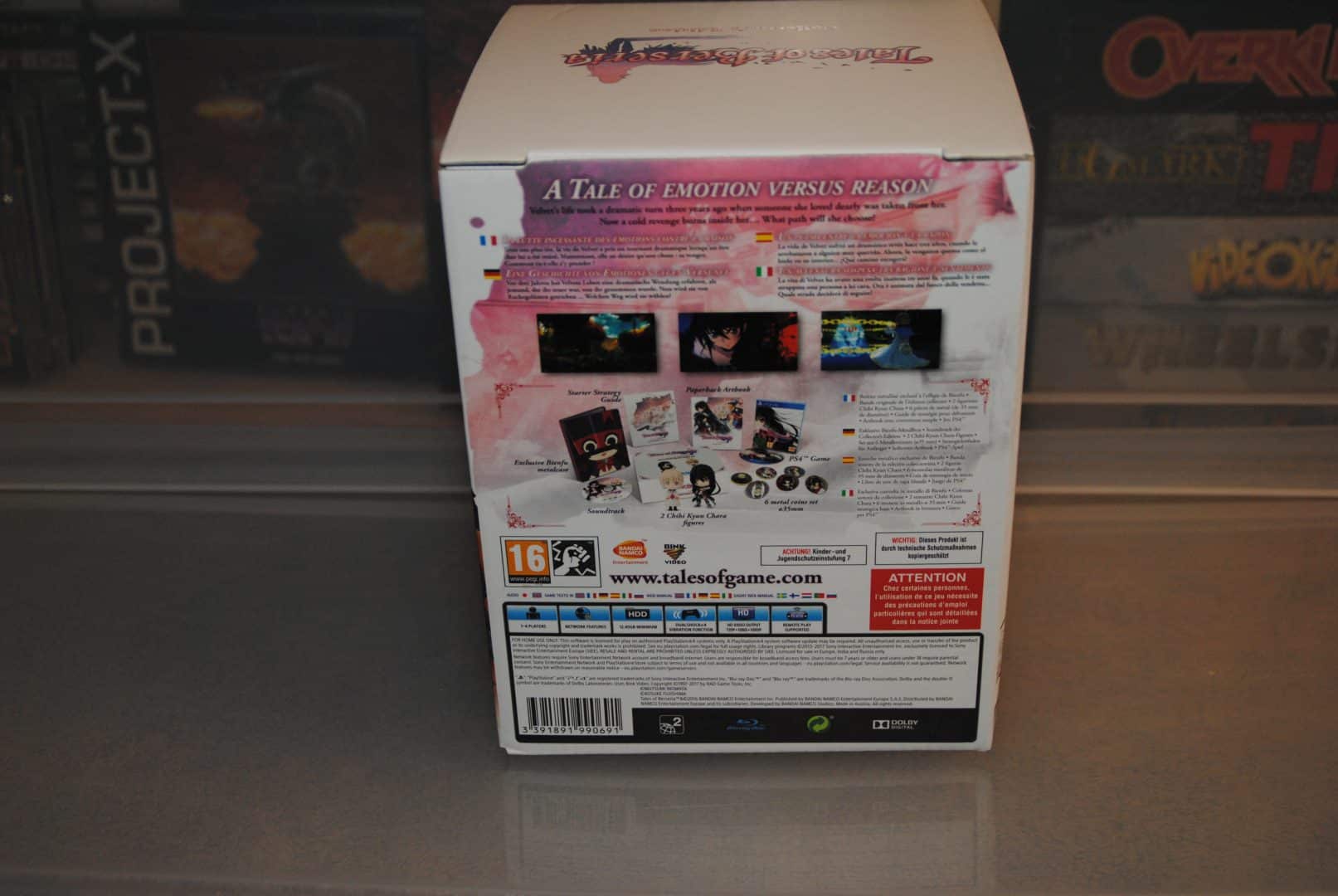 Pretty decent backside on this one, neat and cute style and well I’d say its pretty clear what it aims to do too.

Gotta love when publishers/designers opt for side art that actually helps to make the game look even better on the shelf, very clean style and a typical box that people take a second look at.

Ok, time to check out what’s inside this box then. I naturally did these picture on release day and haven’t looked at them since which means i might be a bit surprised too when i check them now. 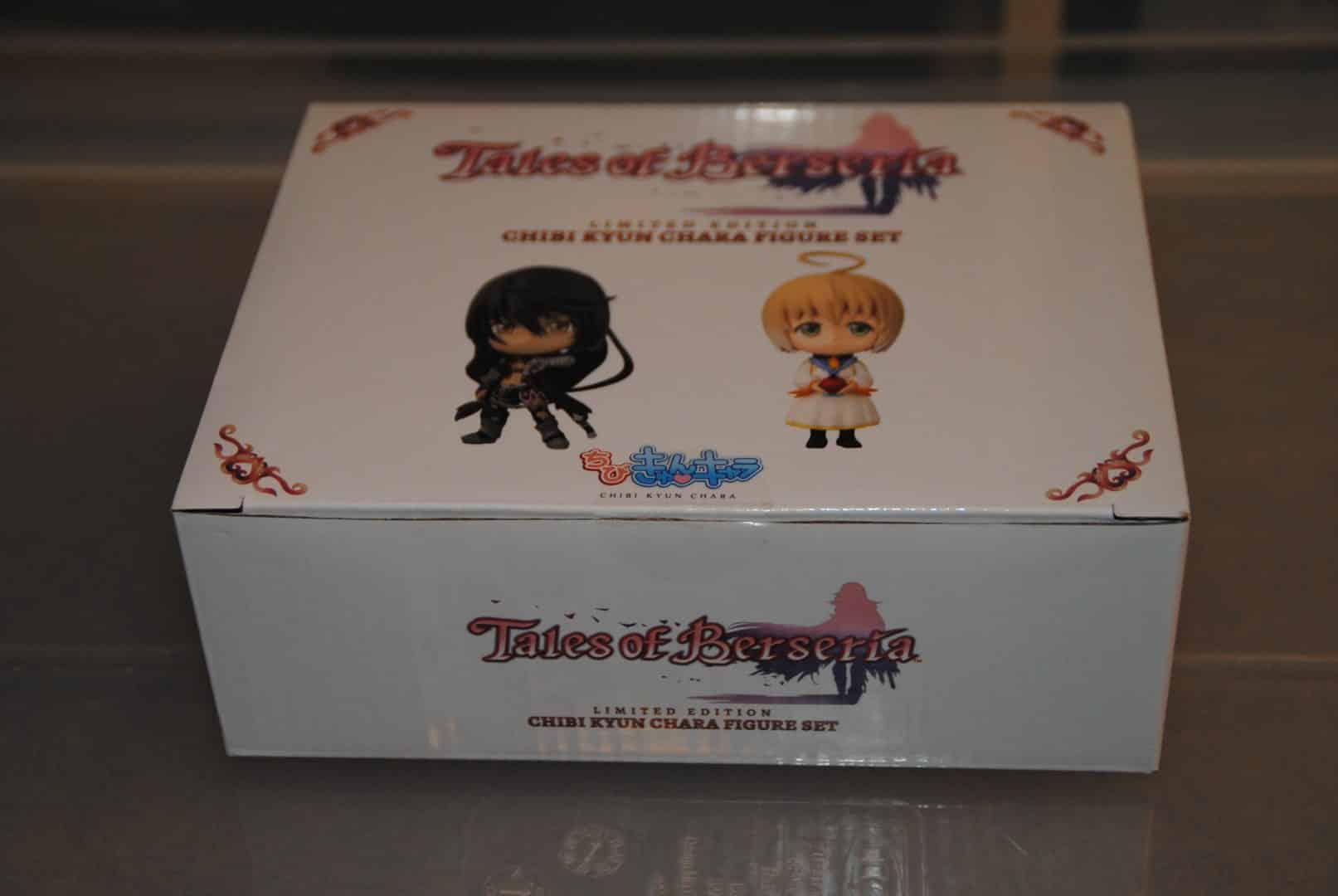 Whoohoo, a Chibi figurine box.  One of the best things with the last game was, of course, those figurines so this is a very welcome part in this box too, time to look closer at them. 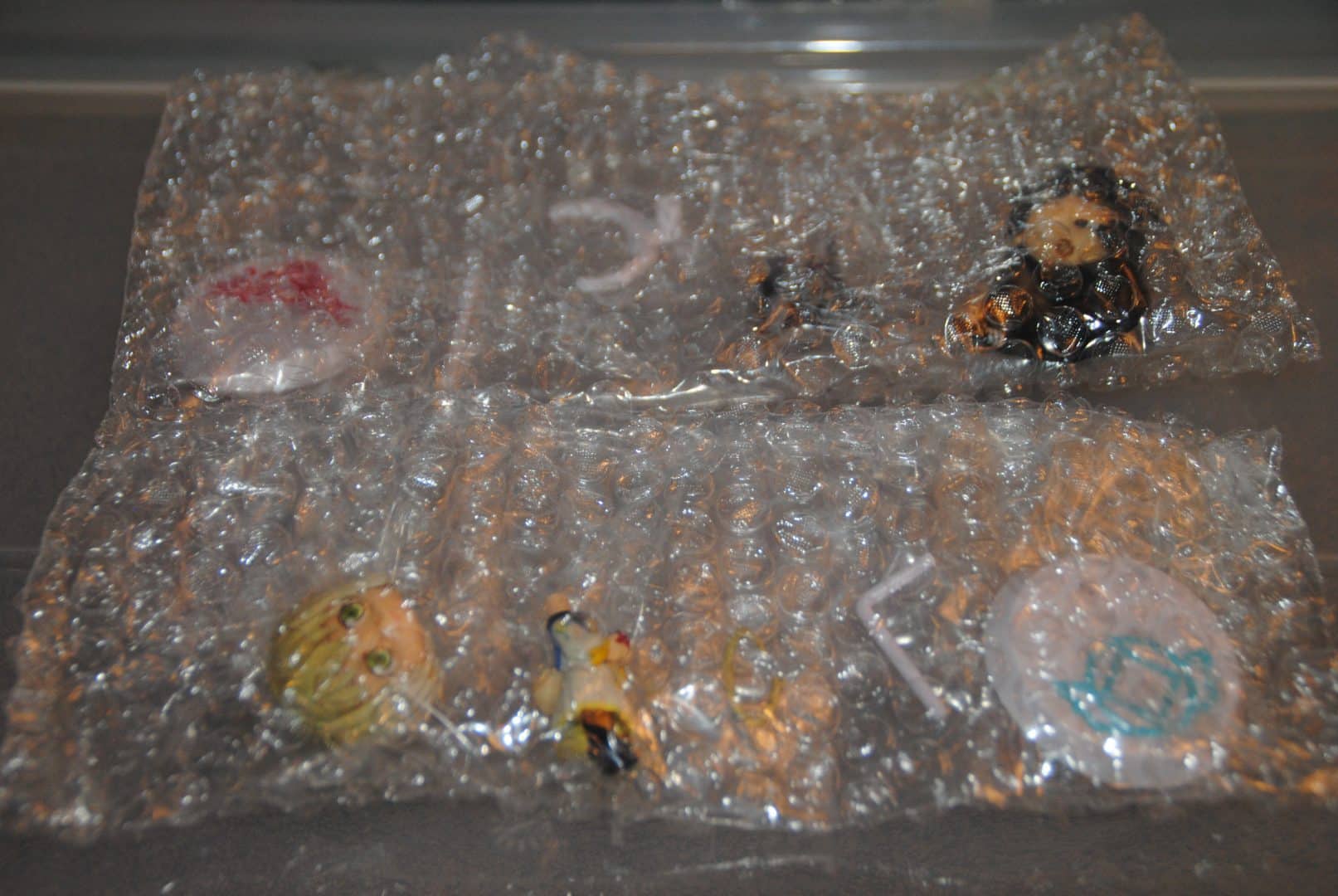 Huge bag, but not as many pieces this time around.  I wonder if they will break when i put em together.  Hate buildable figurines, but i always try to be extra careful with these type of figurines. 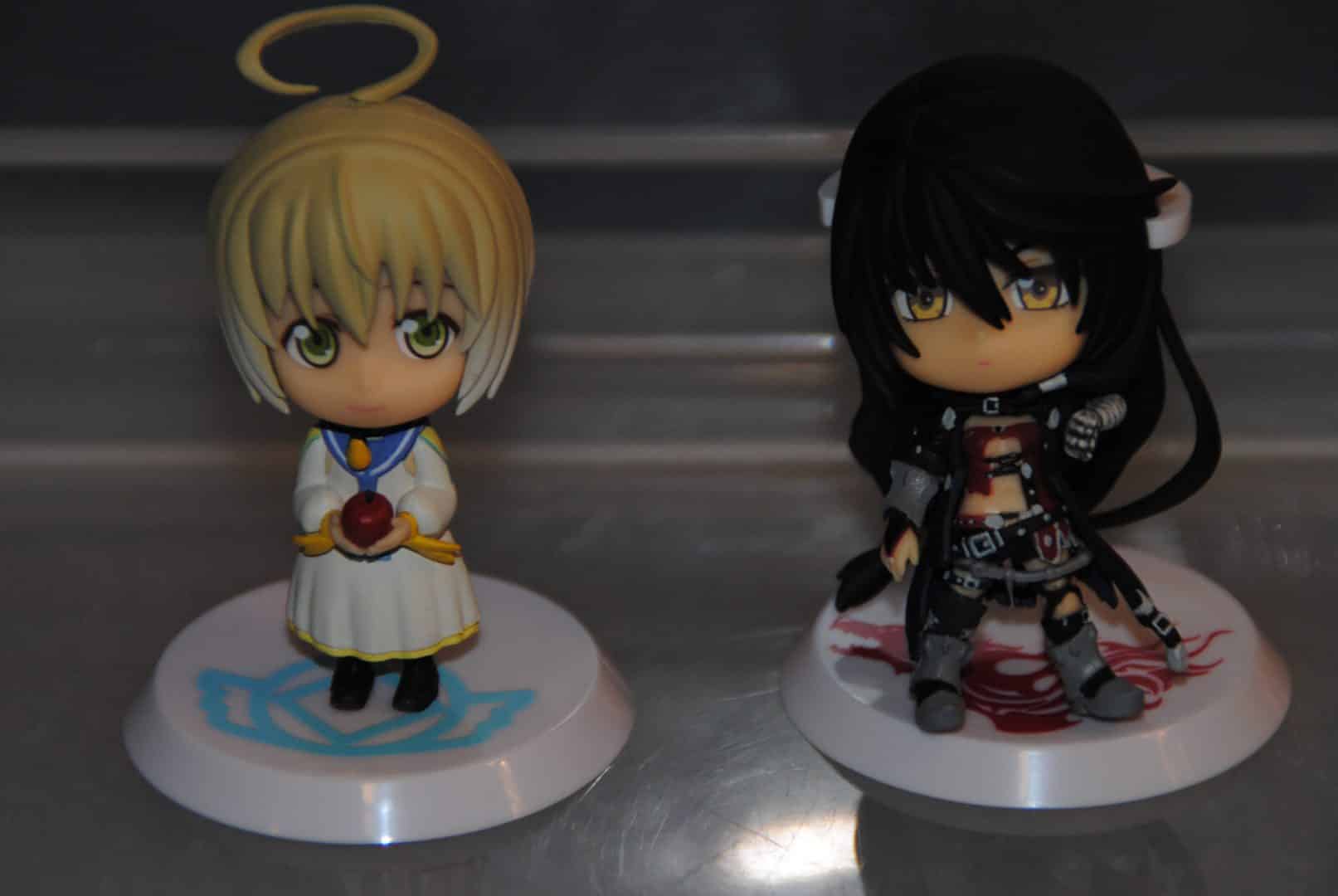 Only two figurines in this box compared to the four in the Zestiria box.

That said, they still look awesome and the attention to detail is impeccable.

The attention to detail is as good as you’d expect from these things i guess, i forgot to do some very up close pictures like last time but i plan on fixing this soon.

I haven’t got a favourite yet, but it has to be said that i am leaning towards the blonde one for now. 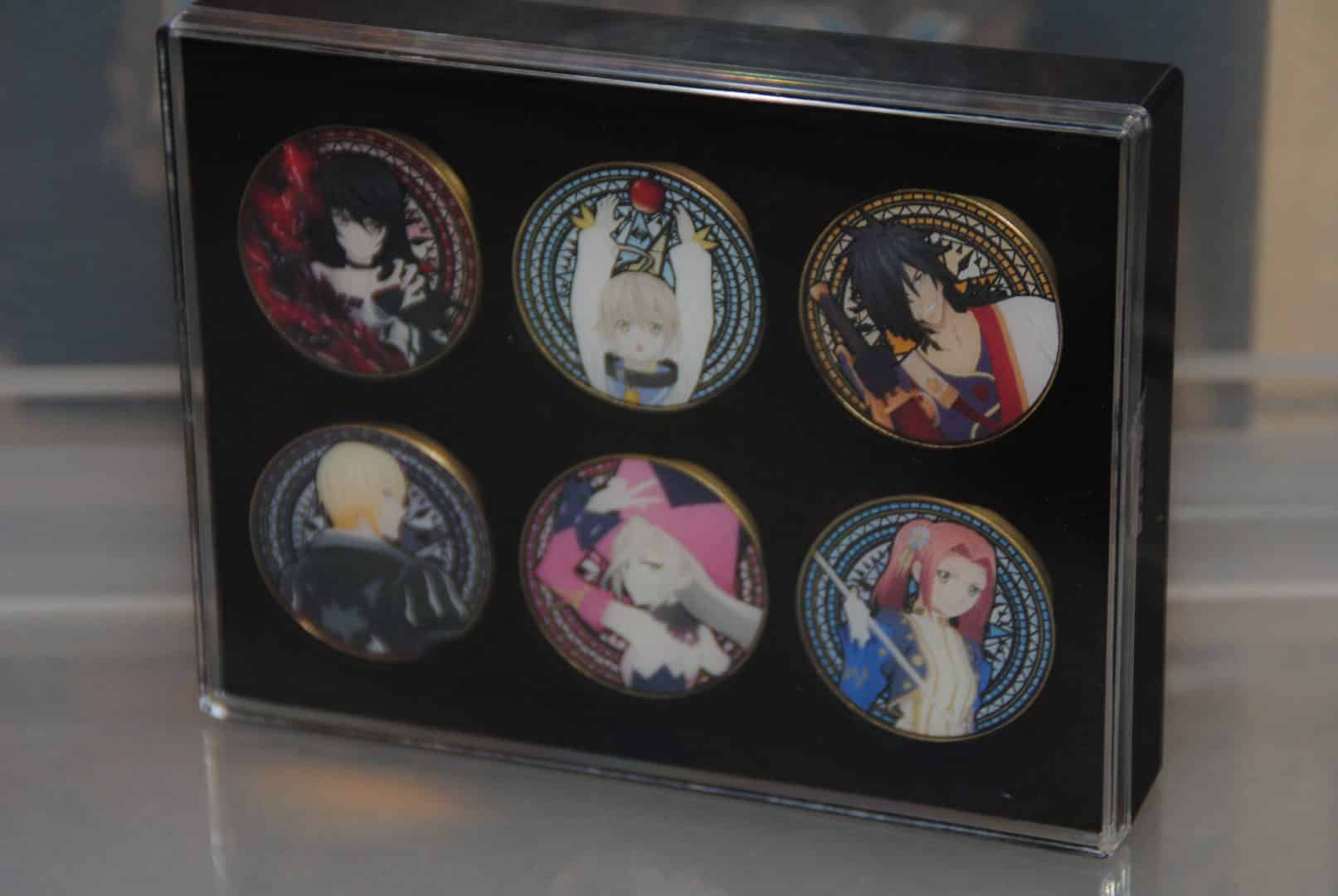 Next up is this thing, what on earth is it you say?, well i was quite shocked too actually as this is maybe the best part in the box and indeed the most unexpected item i have seen in a C.E for a while.

Yup, it is proper Tales metal coins from the games, looking incredibly good too.

They’re heavy enough to feel like the real deal and with the art on them helps to make them very collectable and a showpiece for your (trophy etc ) cabinets.

For some reason most pictures are a bit darker than usual, seems my camera blitz needed some adjusting so some detail is lost due to bad lighting here, but as seen atleast is that colours and details are pretty good, another thing is that the backside of the coins is gold plated. 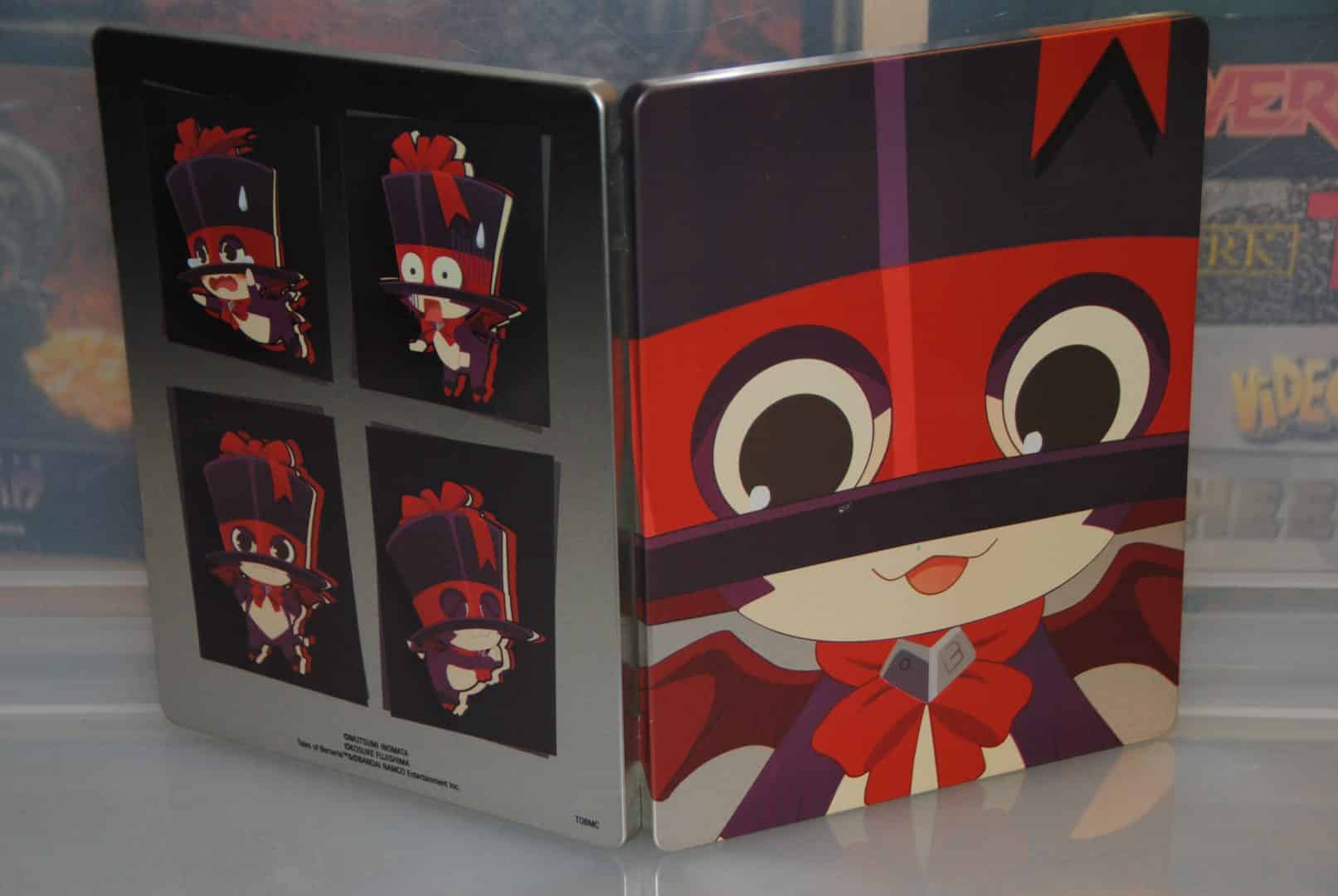 A Steelbook!, awesome looking one too and much better than the one in the last package, the colours are pretty darn good and the overall design makes it look rather tasty too.

Sadly this is yet another rushed picture, seems many needs to be redone here :-(. 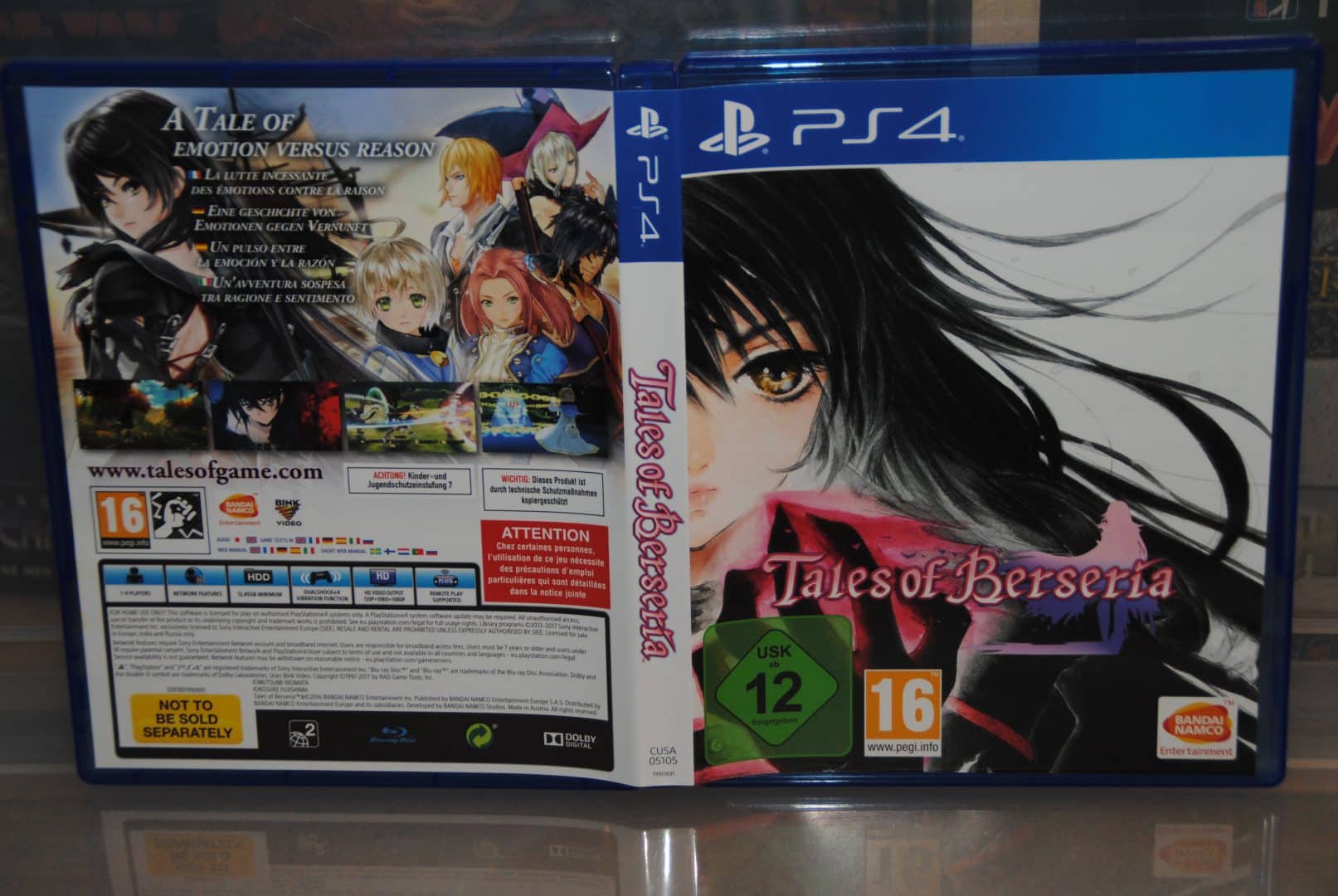 The standard box for the game is the very same as the retail version, nothing special here at all. If it had not been for the awesome steelbook then i would use this one indeed, but this will be one of those that will sit inside “its motherbox (read – C.E) ” forever and ever and ever and ever……

An absolutely brilliantly looking soundtrack CD is also included in the box (sits in the Steelbook), i have yet to check it out but i love that they add a CD instead of just a DLC voucher code.

The game disc has the same art as the Blu-ray cover, looks really good on disc too. 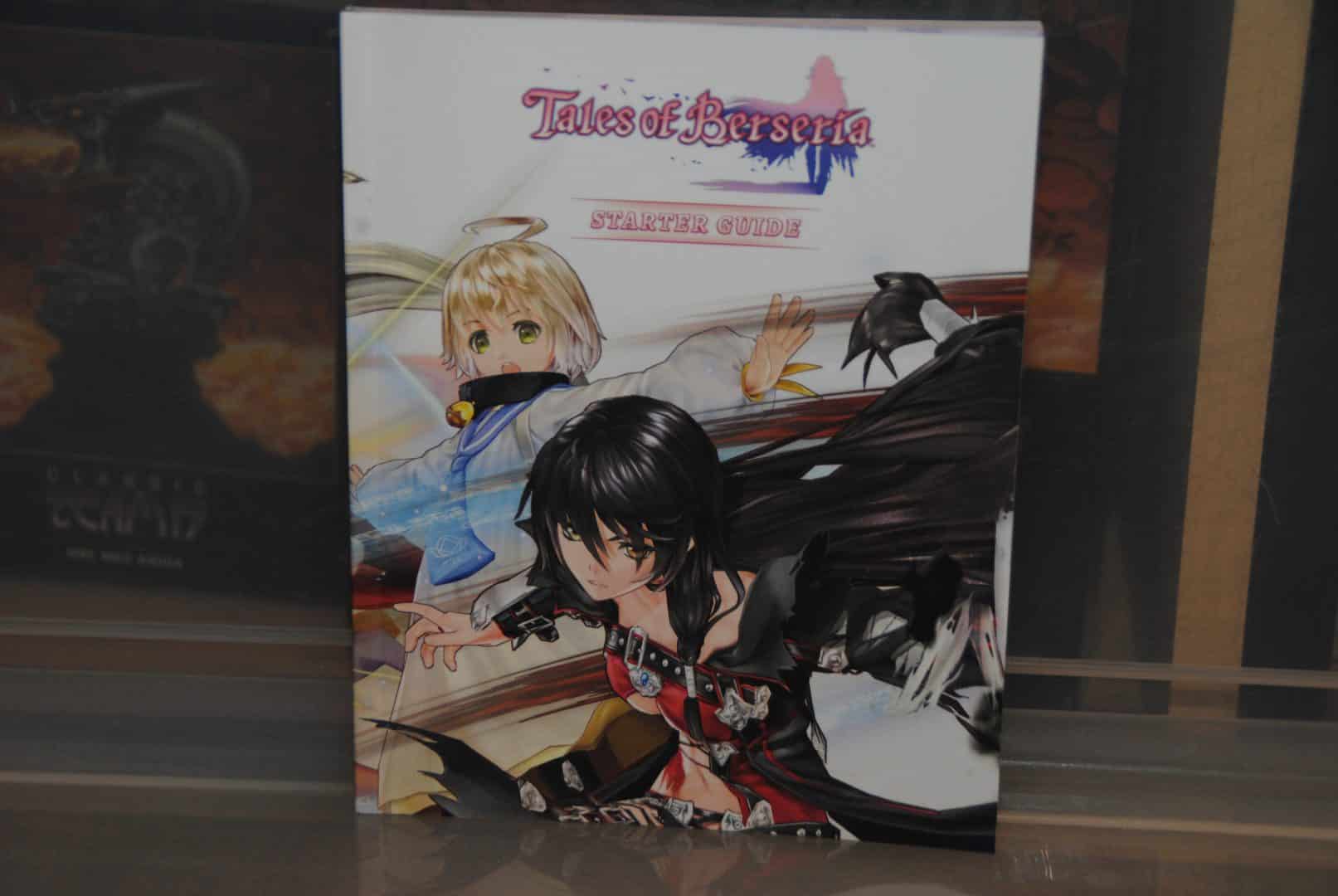 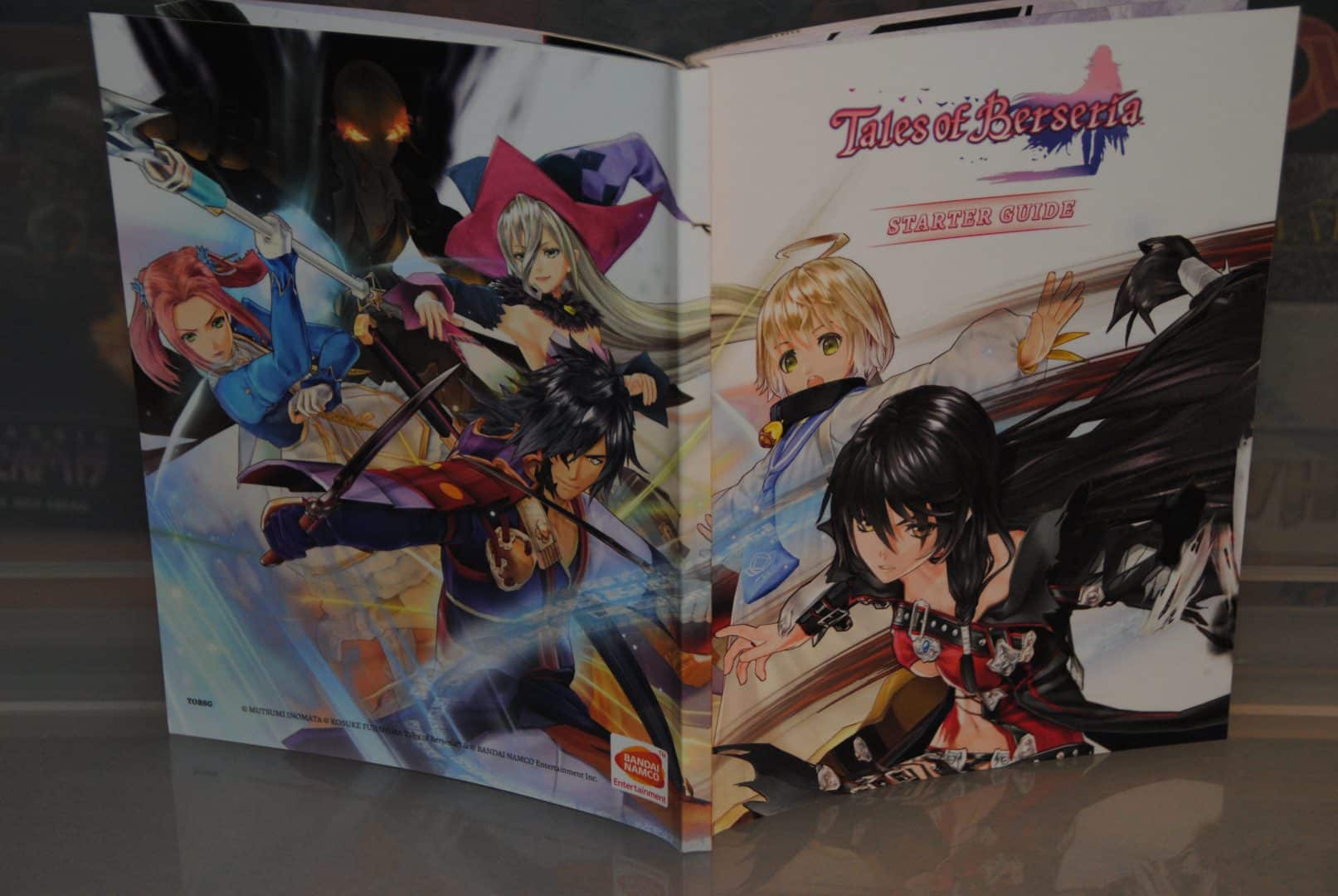 Ok, so that’s it then…. this was better than last time at some things but worse on other things.

Oh, there was one more thing in the package… 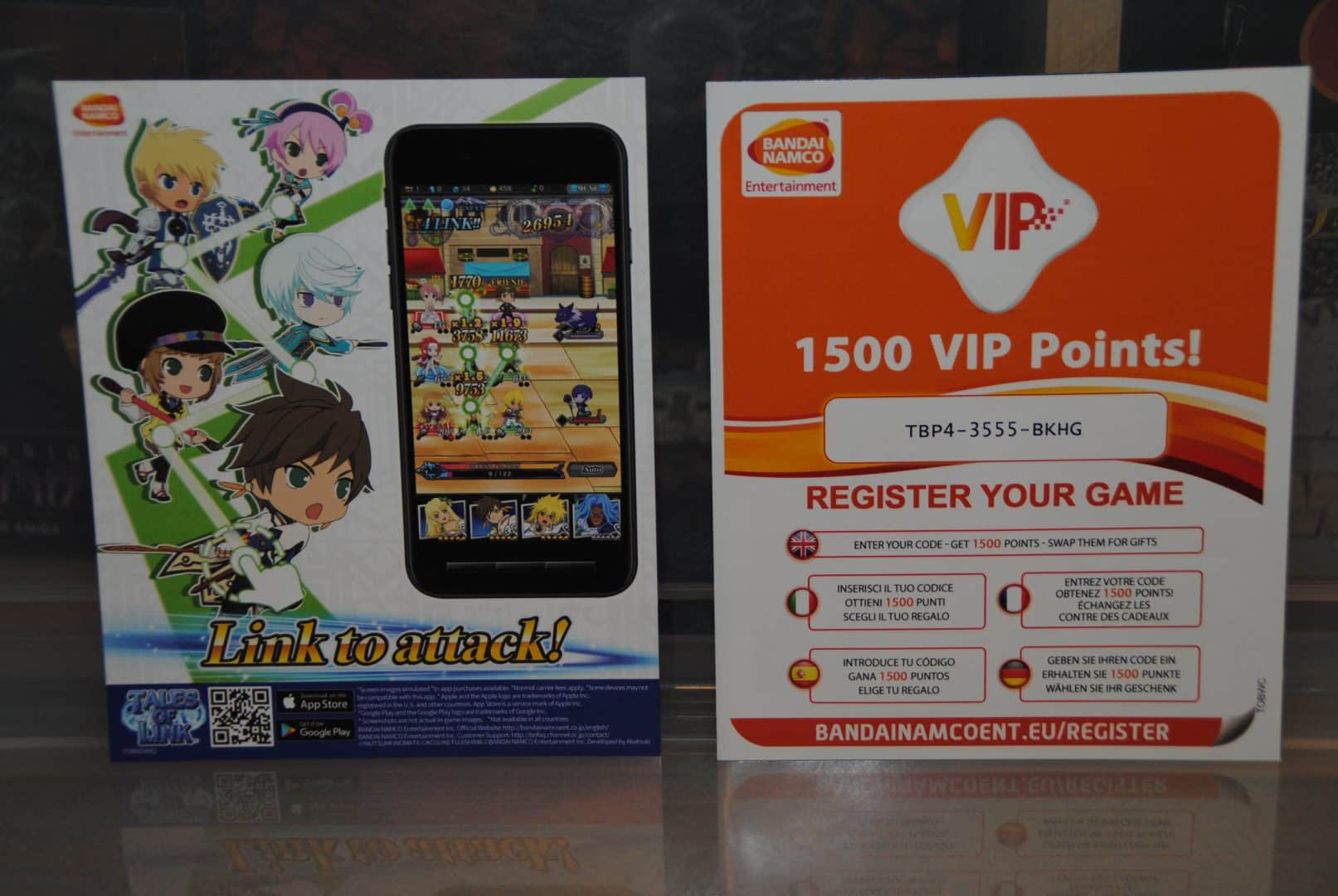 Indeed… it’s two things actually… the usual typical register your game card and a flyer thingy for a cell phone game thing…  Yup, trash indeed. –  By the way! , the code is up for grabs if someone wants to use it and get those VIP points.

Ok, so with that bombshell… 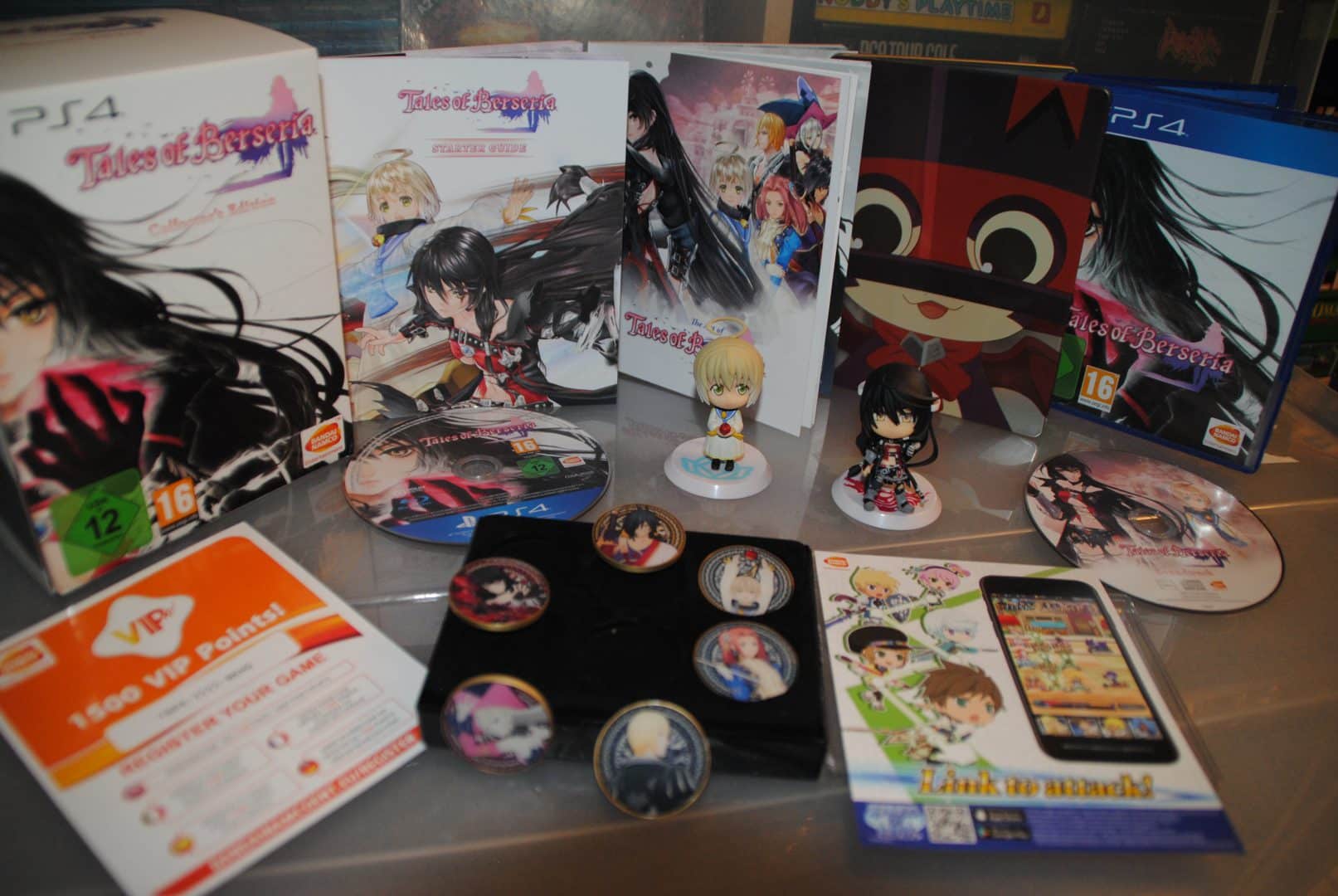 So what was inside this package then?, well, there was that awesome Steelbook of course which to me is maybe the best part of the whole box.  Next was the Chibi figurines which were pretty darn good too, and yes let’s not forget those awesome looking Tales coins. The artbook/starter guide was indeed cool but a hardback artbook like in the former game would have been a much better alternative for me…

So, seeing how wrong i was about Zestiria C.E and that it wouldn’t get rare anytime soon means that i won’t even comment on this one in that regard, that said, i will add one thing here and that is that this game is printed in a smaller run and that many shops never had them in stock at /or around launch.

5 thoughts on “A Look At Tales Of Berseria Collectors Edition”