This is yet another delayed unboxing article, it was supposed to be out last month but my time is limited as always so i decided to hold it back for a couple weeks which has now turned into over a month and then some.

DISHONORED 2 is one of those games that i never planned on getting, but thanks to promotional efforts and the style of my blog, well it ended up in my post box for free.

So yes, i am now obliged to write an article and even play the game at some point in time. 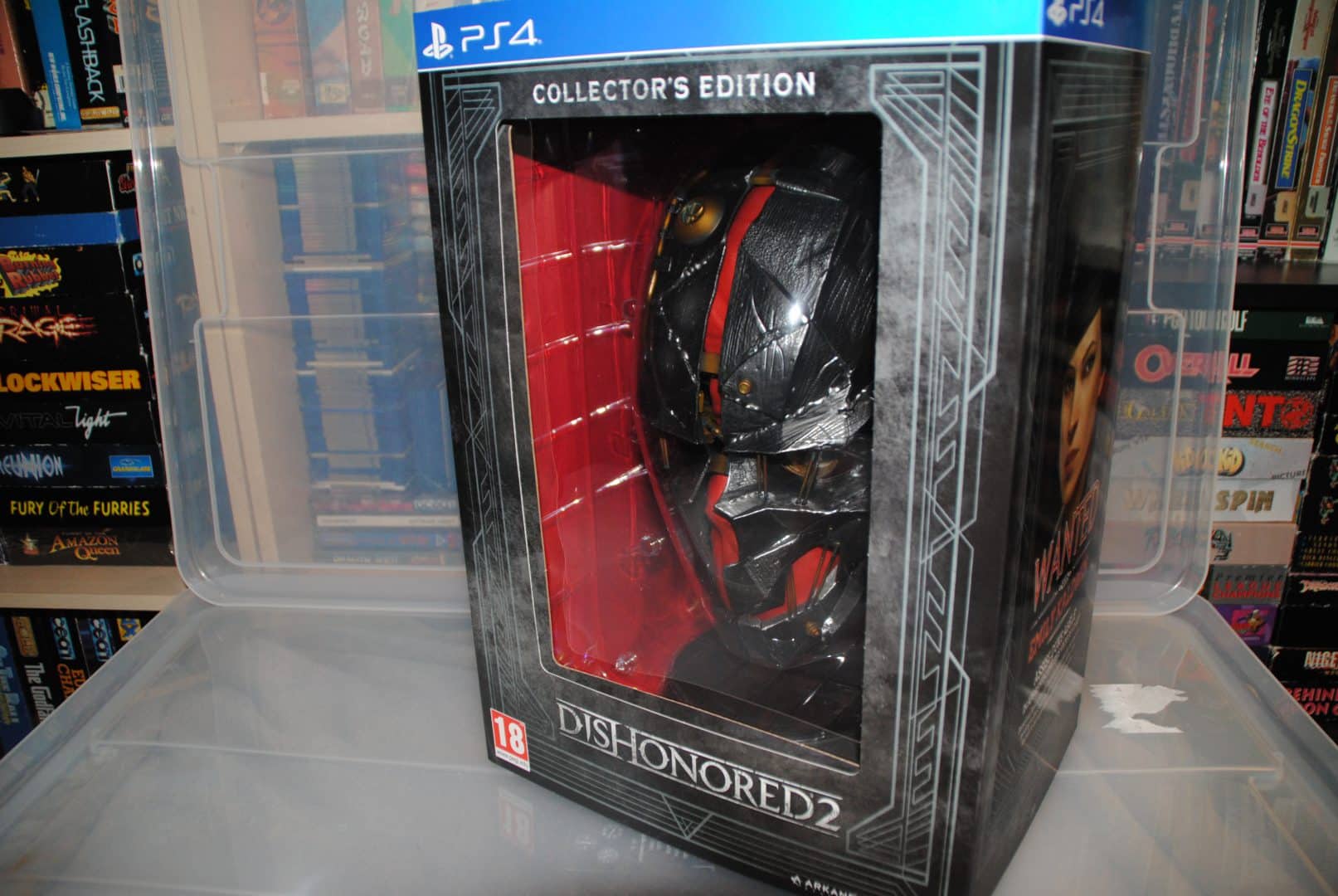 The front of the box is wicked, it’s huge and the colours used are badass to say the least. There is something about the paper used too, it feels different to other boxes lately, and no it is not a good thing as it feels more like a normal merchandise box rather than a sexy collectors box for collecting purposes. 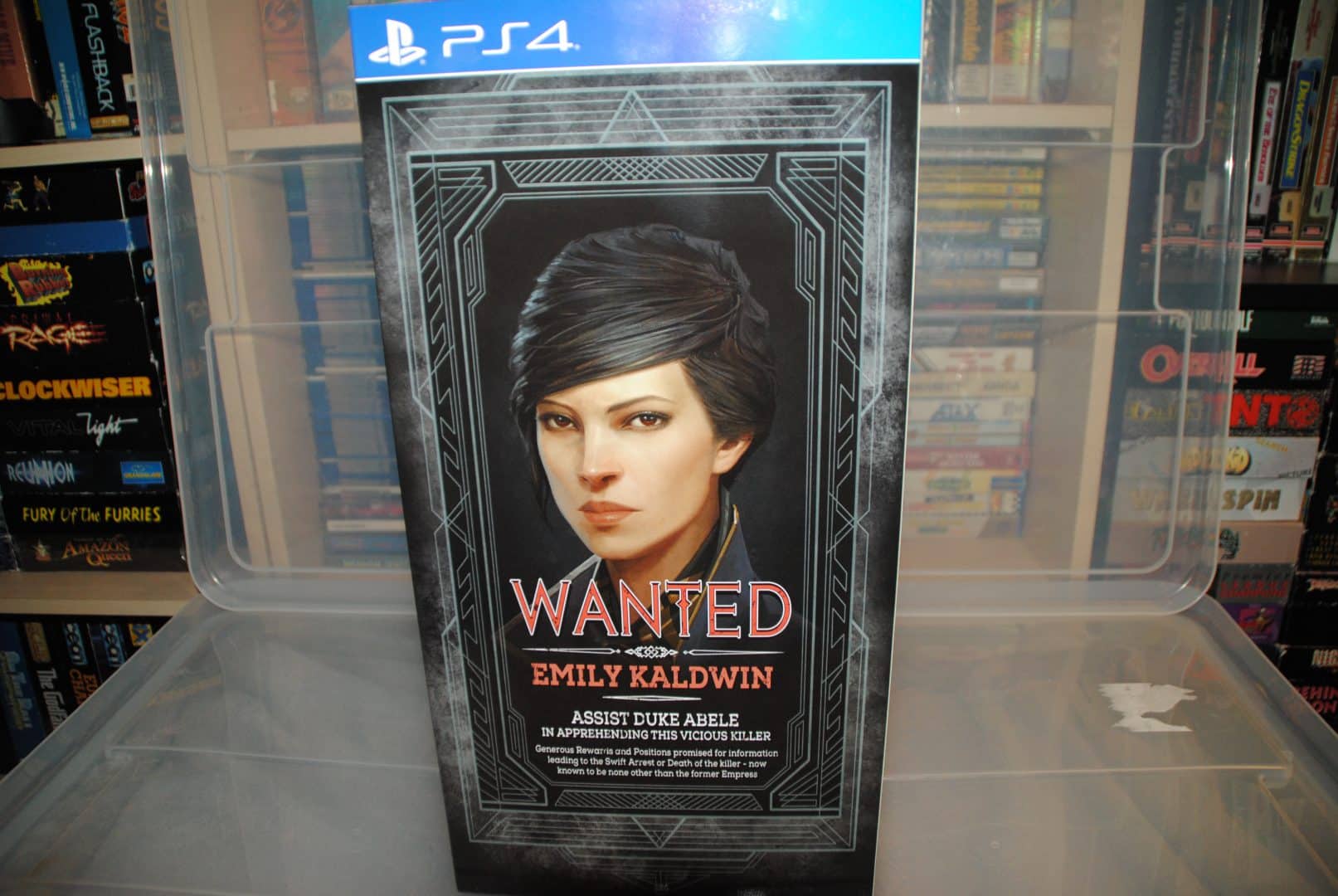 The box got some really detailed side art too, wanted posters copies actually, which looks nothing less than stellar. 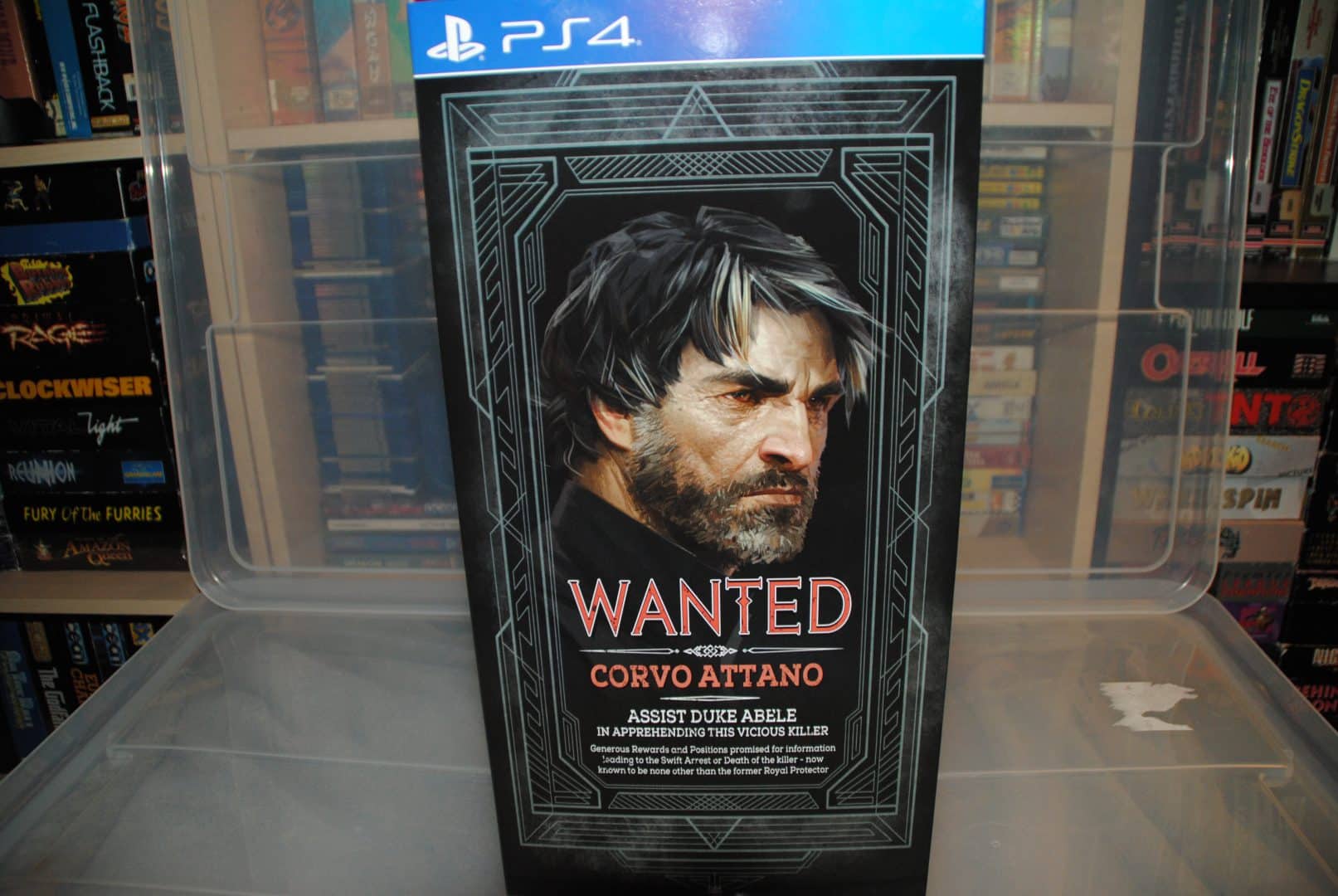 As you can see it really wouldn’t matter which way you put this box on the shelf, any of the four sides will do. Outstanding quality and look. 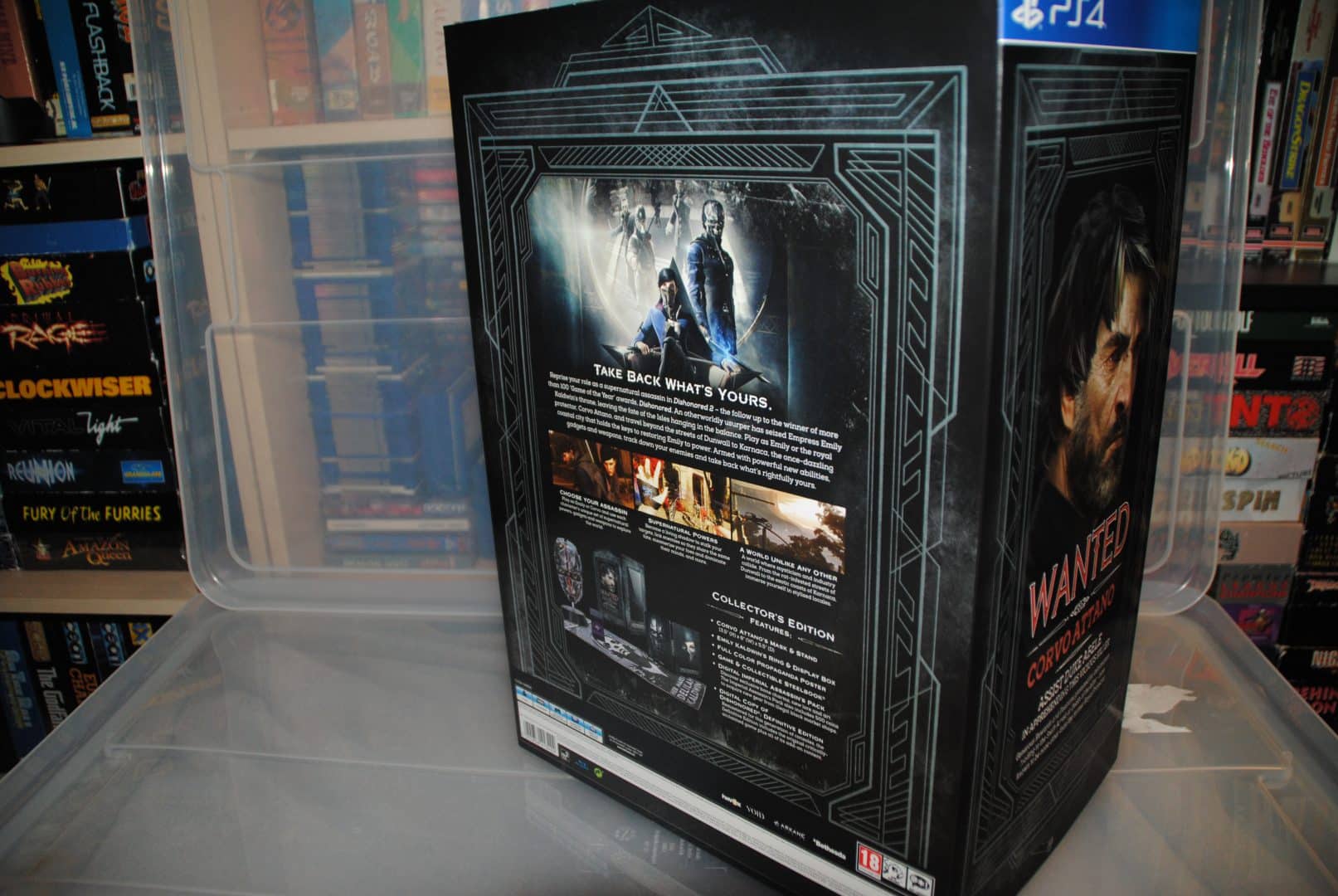 The back side of the box is a bit more generic although very good with good style and design. 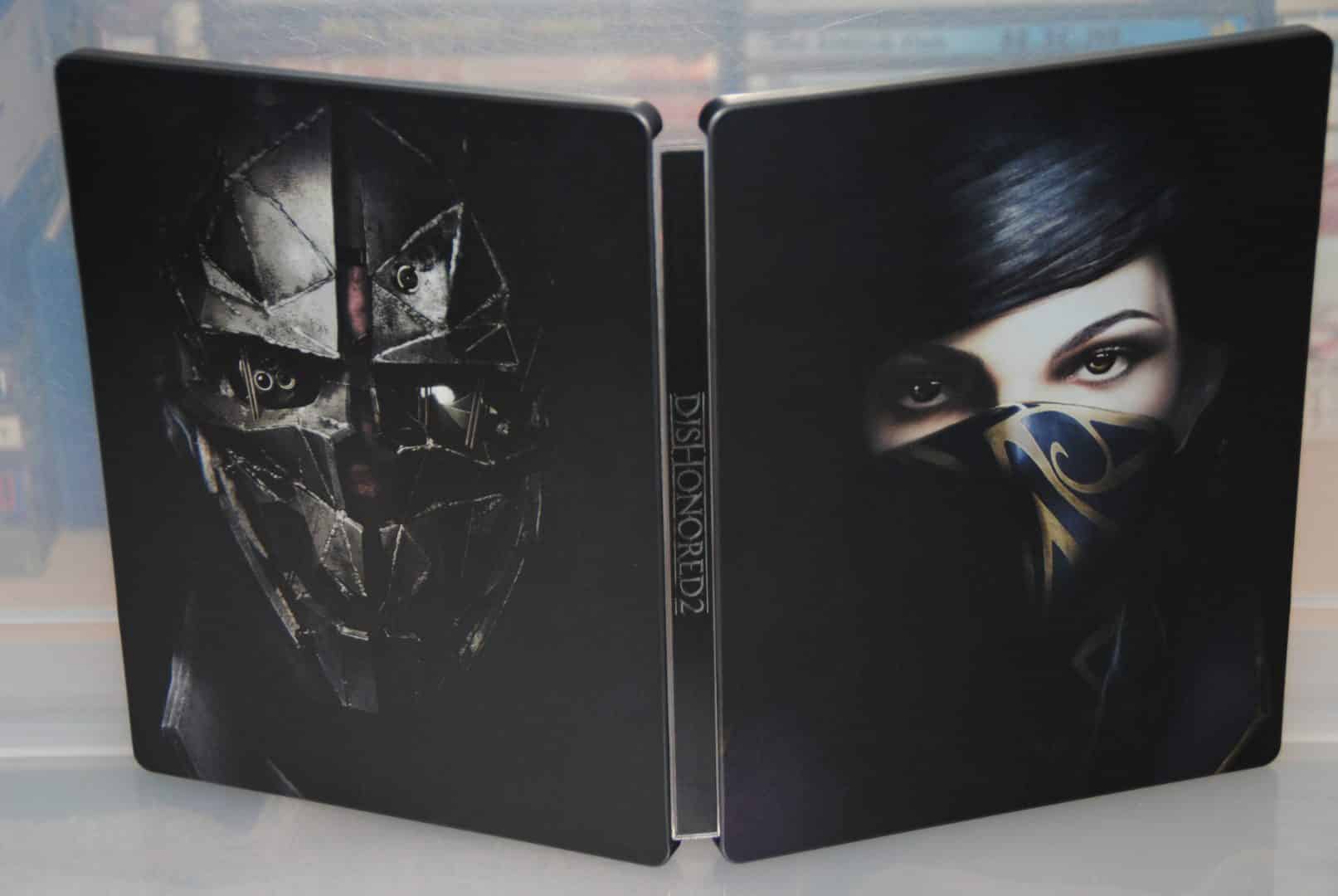 The steelbook included in this box is yet another gem, my god does it look good.

Glossy look with lots of black shades, this one would look brilliant in a display case. 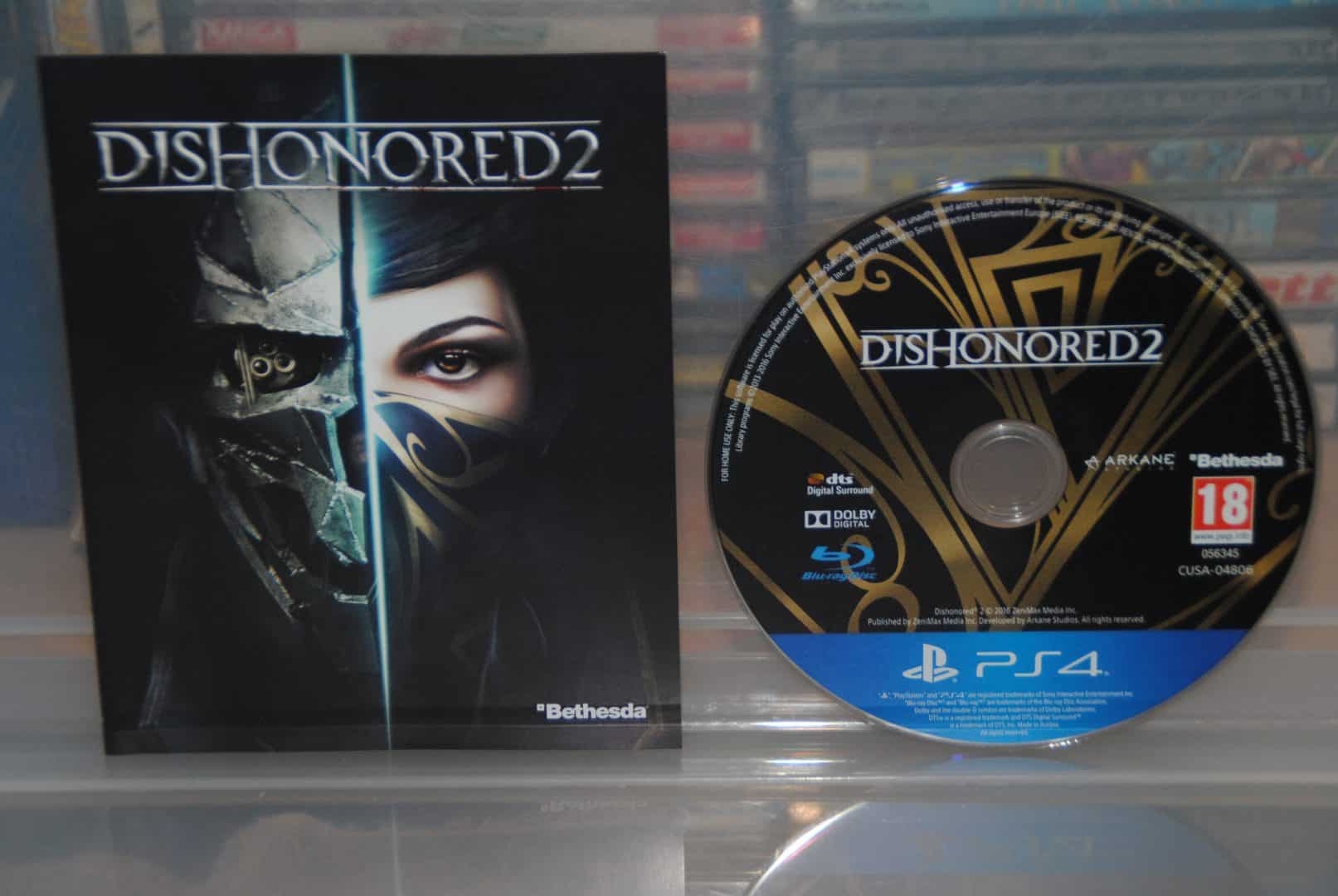 The Blu-Ray, on the other hand, is nothing special, i mean, look at the steelbook and the manual, i guess you know what i mean now?. 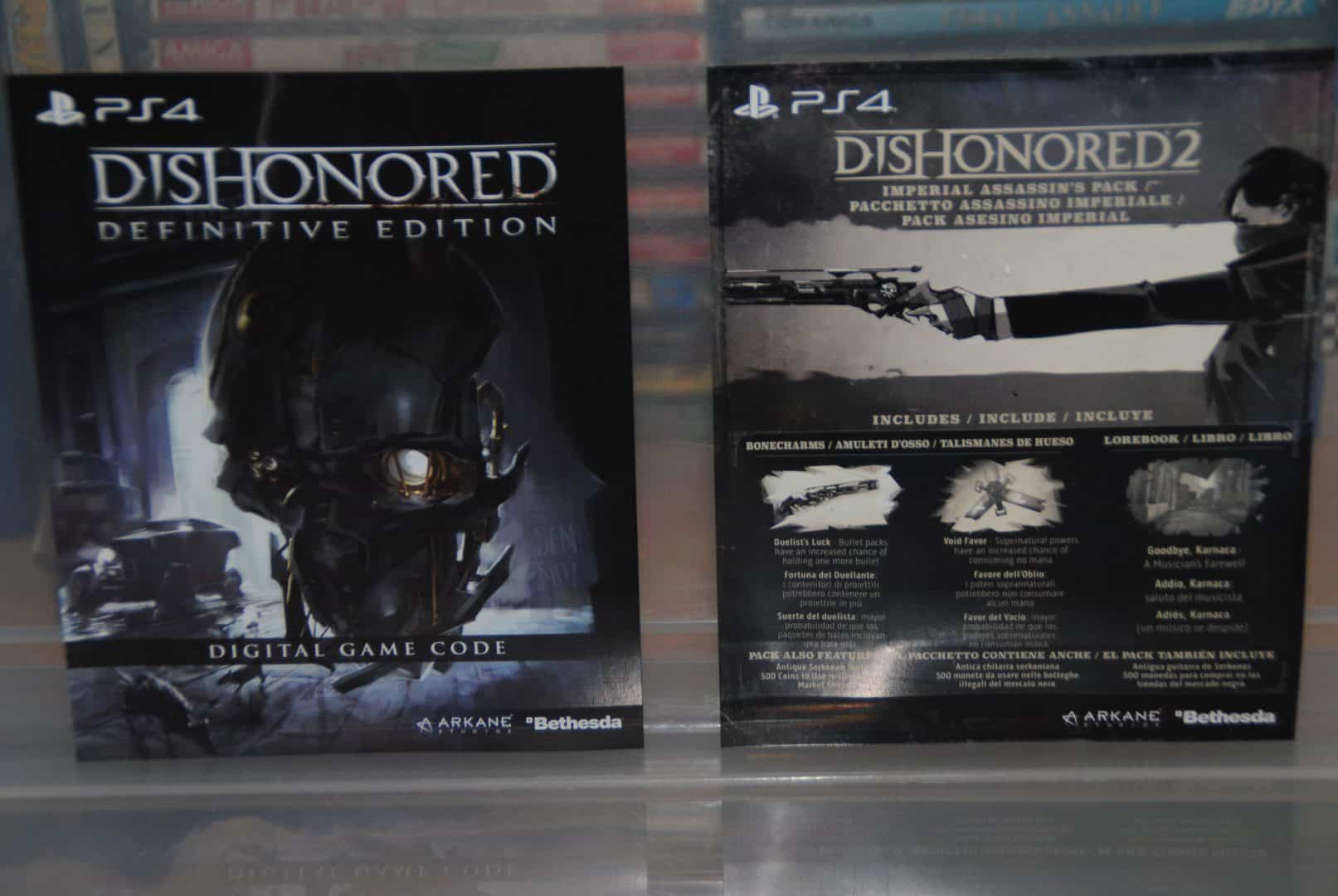 To my big surprise, the first game is included in the box too, the PS4 remastered version of course.

I’ve had the game on PS3 since launch and yes i never completed it as the game just felt “off” when i tried it, and as with so many other games it just ended up in the gigantic backlog.

Will i give it a second chance one day? well, i have to now that i got this one so i expect that it will happen in early 2017. 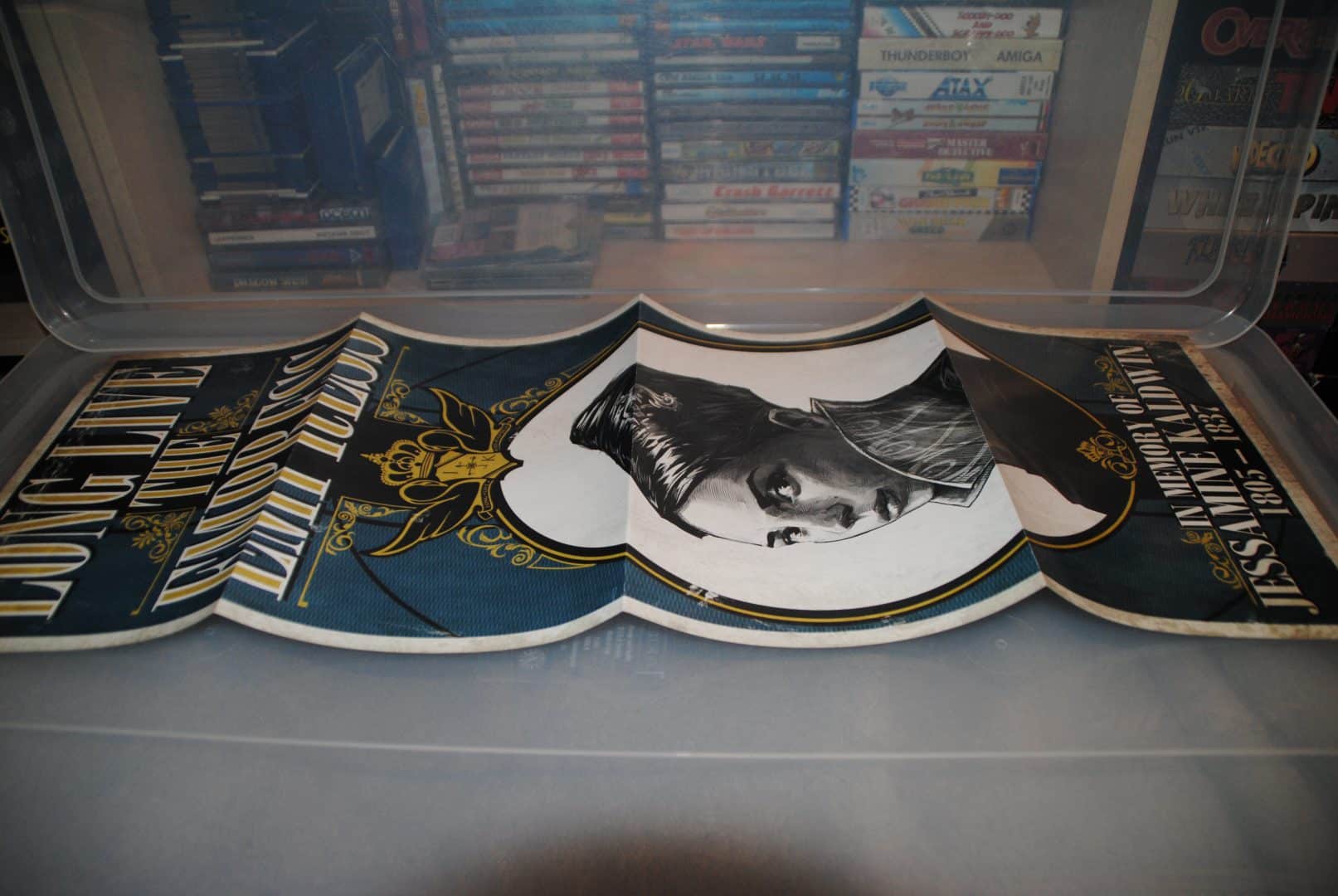 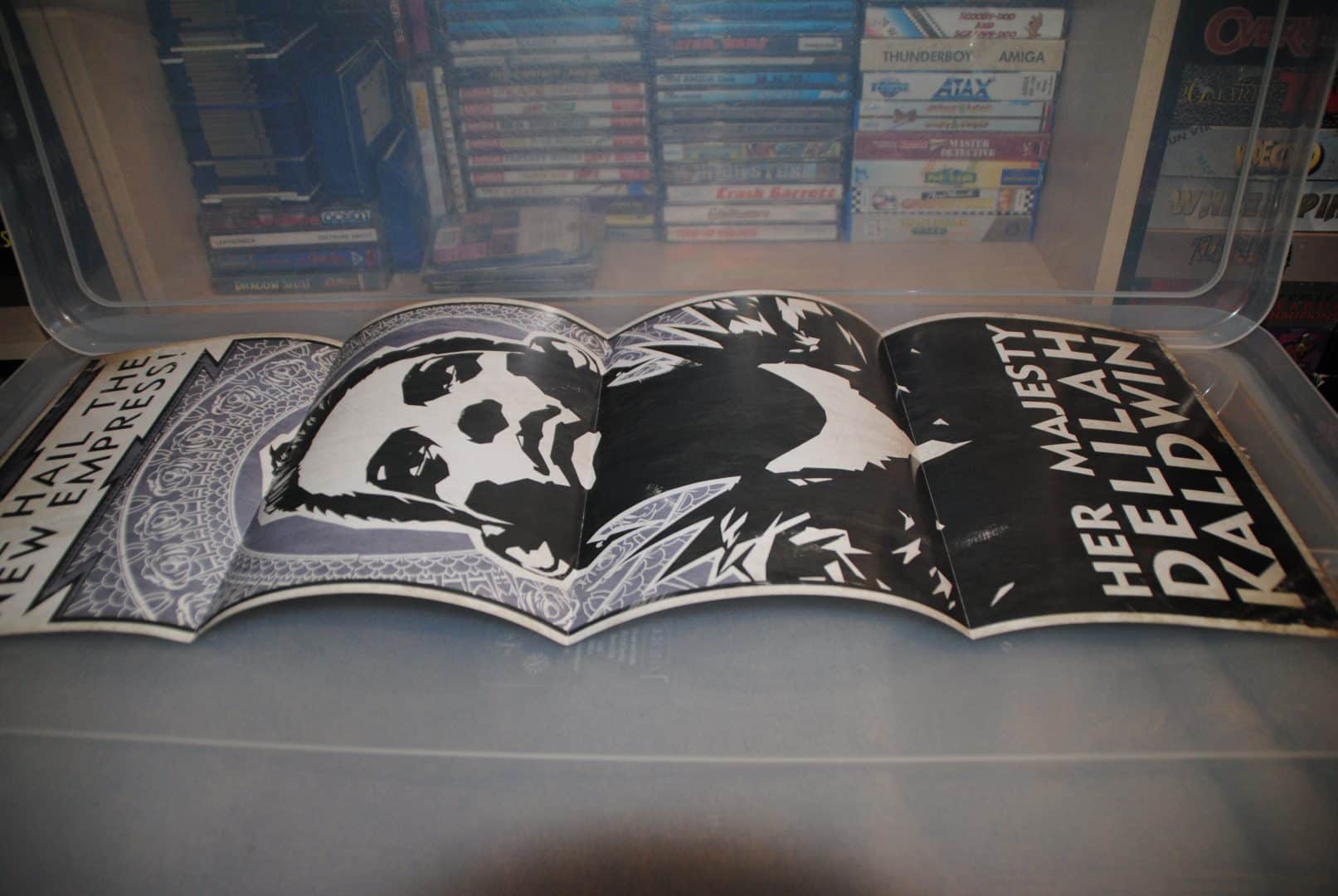 I guess it is obvious what my take on b/w posters and the general art direction of the game is, but I’ll keep it short and just say “grey, a boring colour can light up just about everything”.

The inclusion of this ring is maybe the biggest surprise for me, i mean, first of all, it was hidden quite nicely in the box and secondly, it looks really expensive in terms of design and colours etc.

Yes, it is most likely just “junk” but for a guy who never gets jewellery, this is cool stuff. 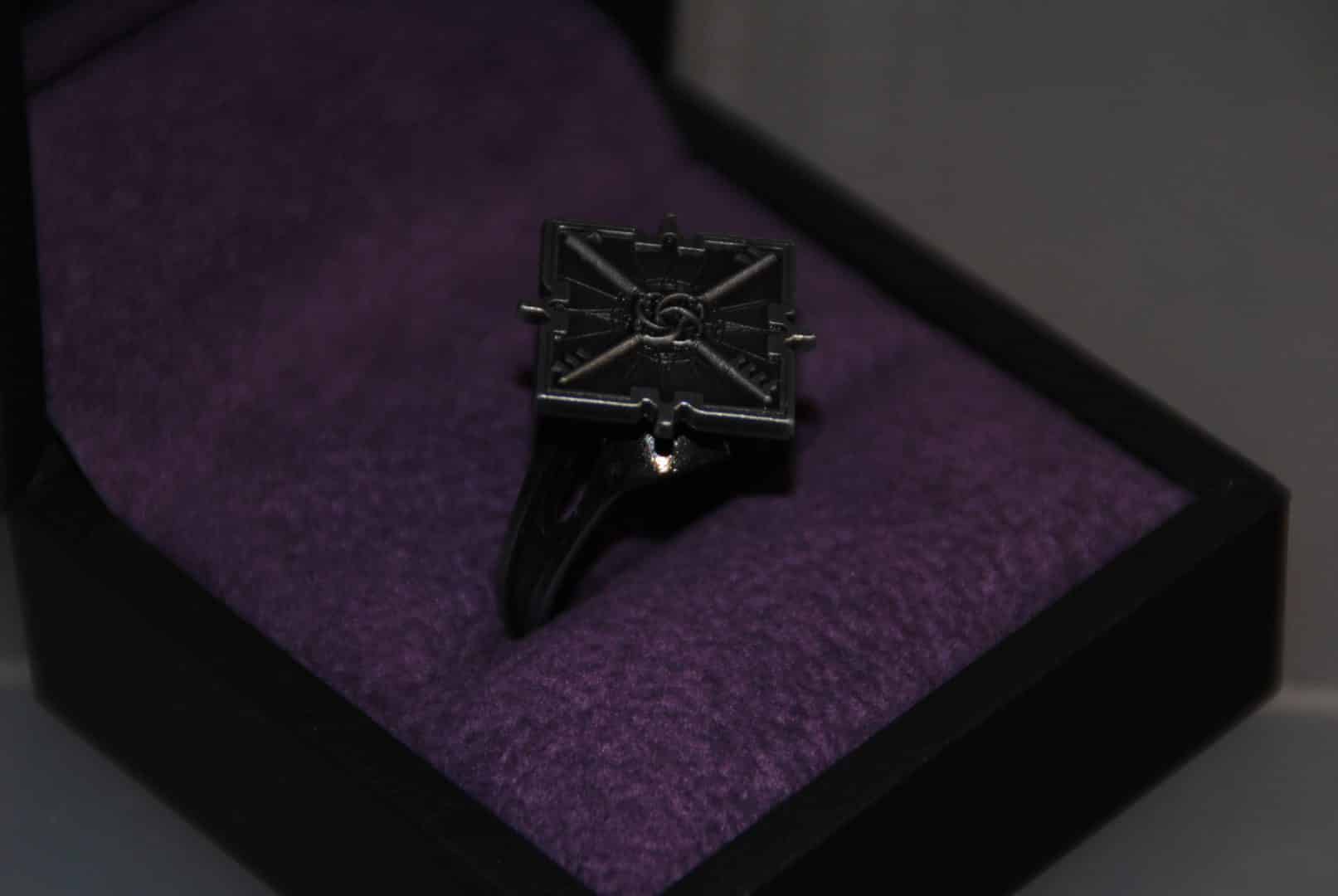 I do not wear jewellery for various reasons but my main reason is my health (a form of arthritis) but i will take it out once in a while and have a look at it, really cool item this one and a very welcome one in my collection too. 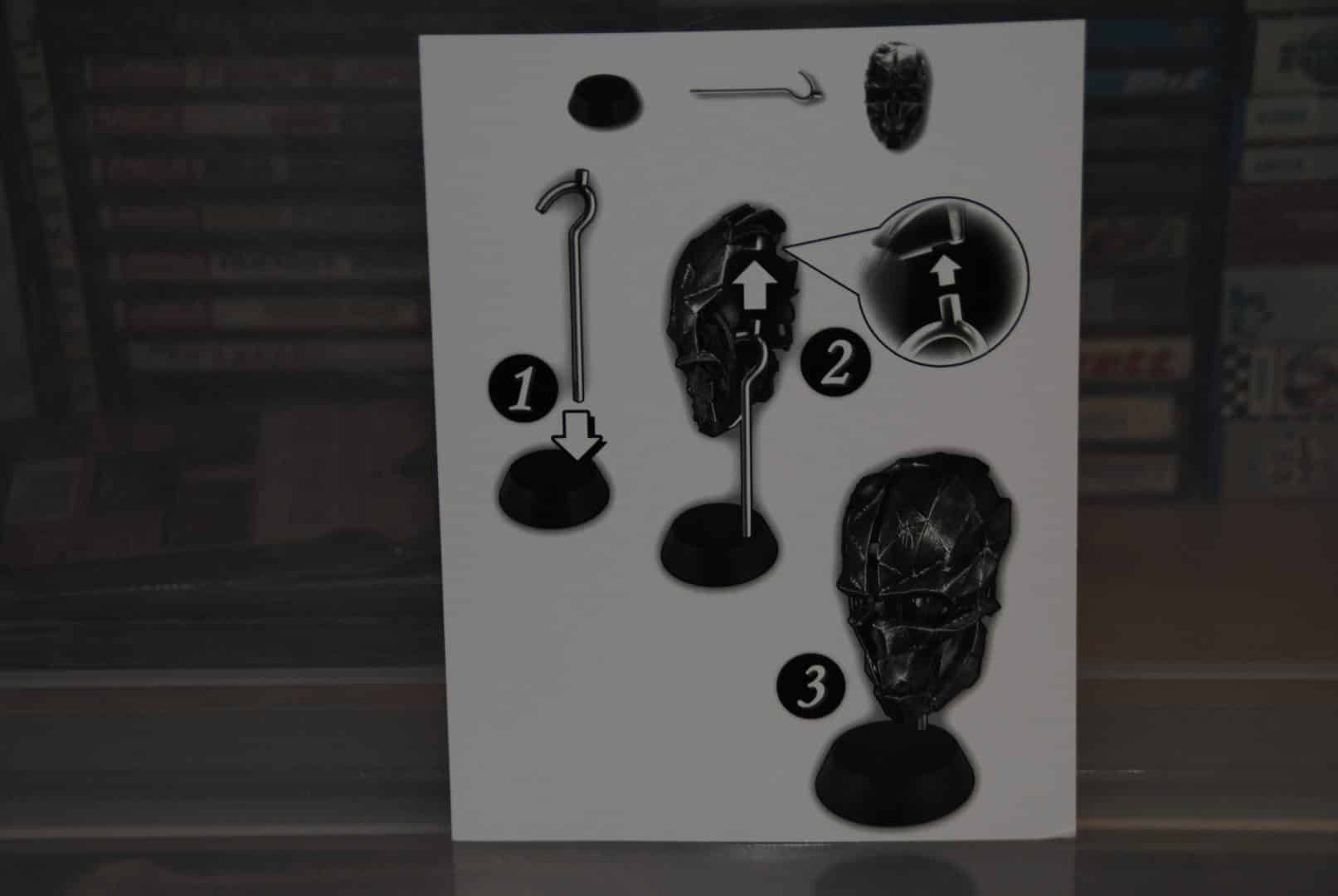 Next up is the mask/figurine thingy, a really bad instruction sheet for how to attach the mask on the included foot is naturally part of the package, this sheet is so awful that i actually disassembled the foot etc after i had put it all together to try again and see if i could understand it better.

As you probably noticed within a second or two, the mask is nothing less than amazing. Colourful, original design and a good dose of attention to detail.

I have a few masks by now and while this is not better than the Darksiders II mask, it is still absolutely brilliant. 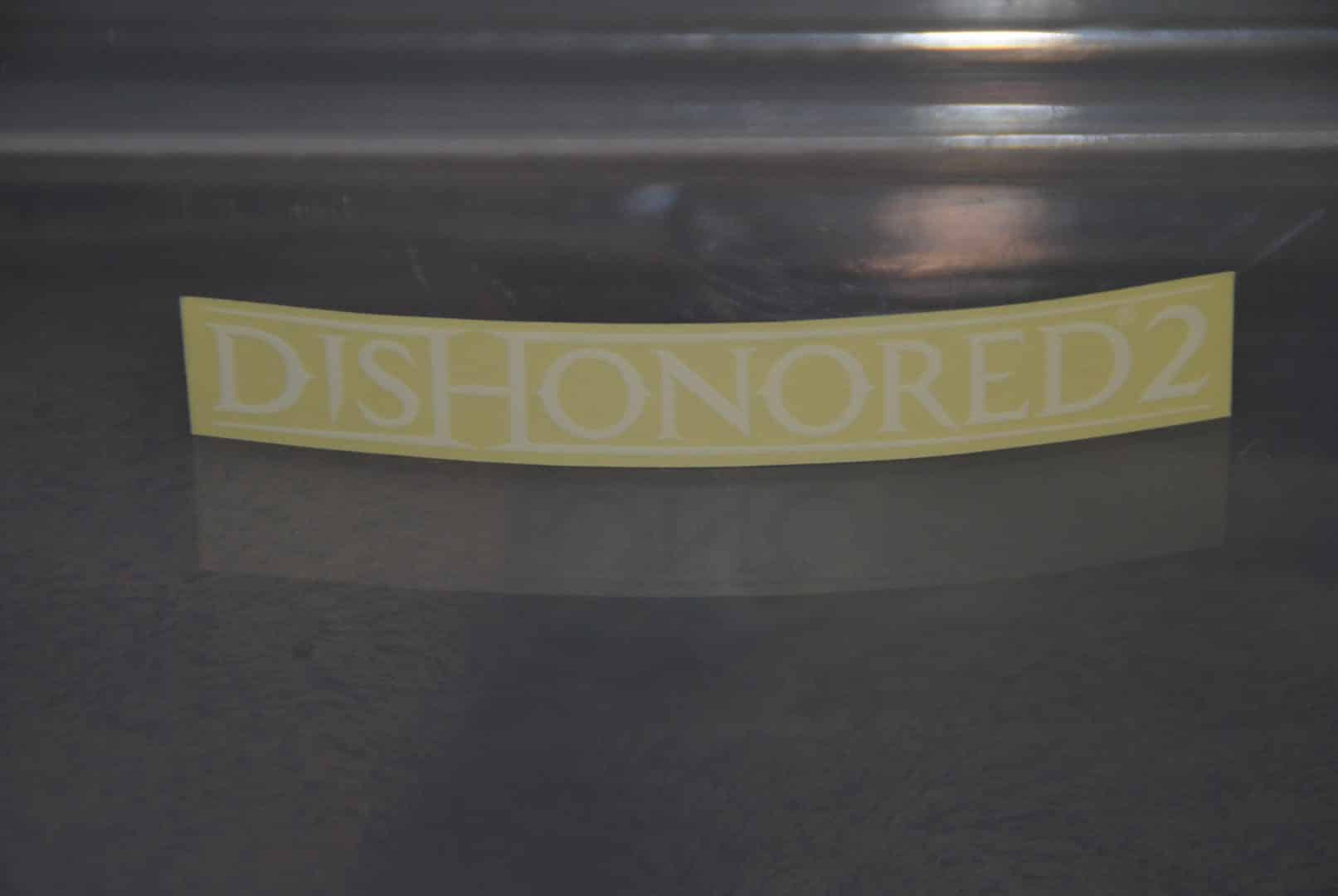 Took a while before i figured out what this was, well i knew it was a sticker within seconds but where to put it and why, yup it goes on the foot of the mask thingy,  not exactly amazing or anything but cool that they at least tried to make me put a sticker on it. 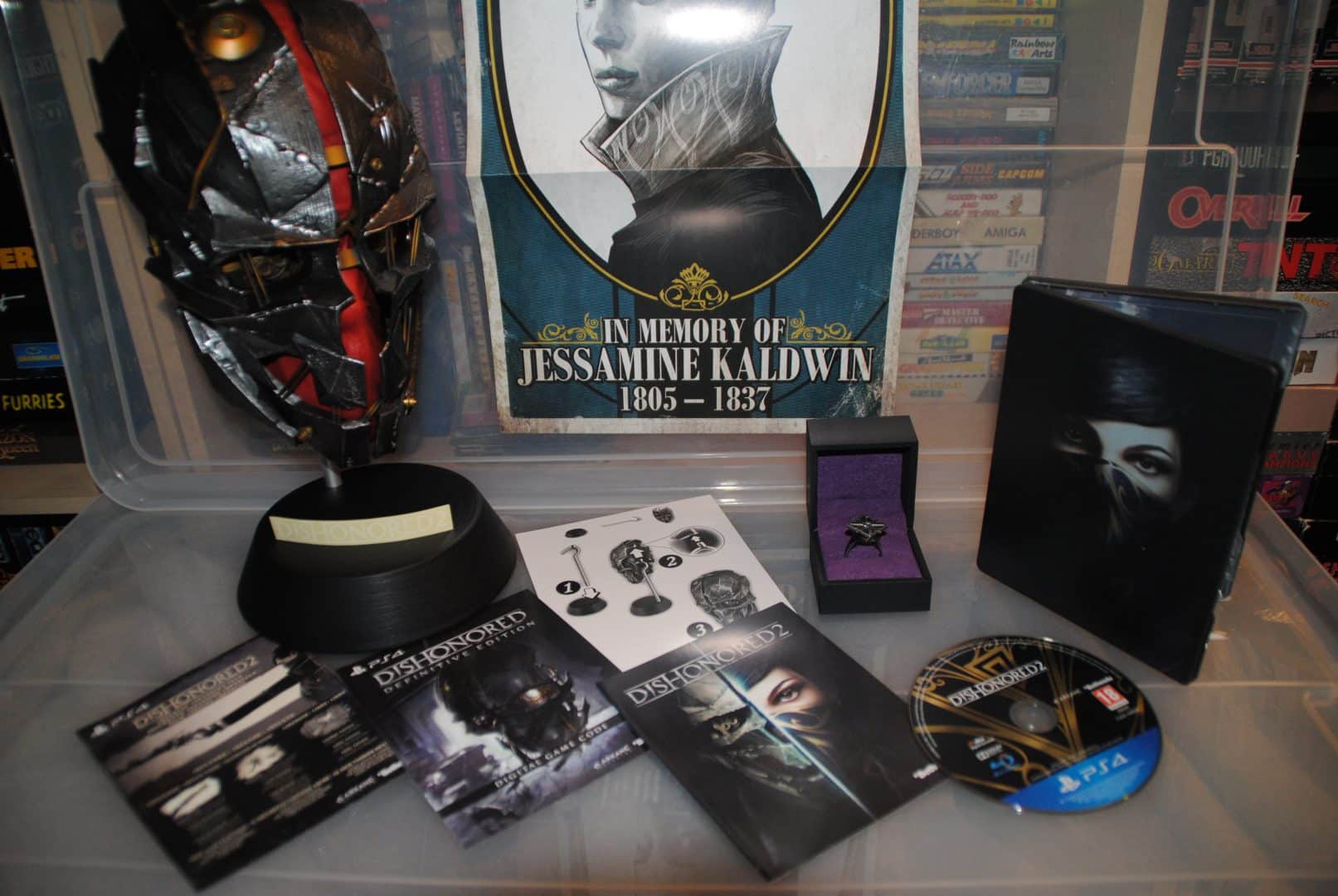 What a box this is, huge surprises both in attention to details and in value here, the Steelbook is absolutely gorgeous and the figurine is a step up from many others. The ring kicks most

necklaces and such from other boxes lately.  I also have to mention that adding the first game remake in here was another brilliant move.

A great collectors edition this one, only thing missing has to be an artbook.

3 thoughts on “A Look At DISHONORED 2 COLLECTOR’S EDITION”