The sequel to 1984‘s The Staff of Karnath, Entombed is the second game to feature the aristocrat adventurer, Sir Arthur Pendragon. Set inside an ancient Egyptian tomb, the objective of the game is to escape before all the oxygen runs out. Entombed received very positive reviews upon release, with PCW scoring it 5/5 and describing it as “a must for any adventurer’s collection”. ZZAP!64 awarded it a 93% Gold Medal and called it “a truly classic game guaranteed to keep you in company of owls for weeks.” 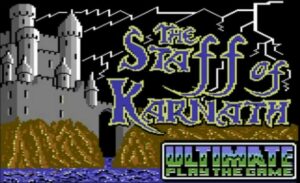 As a matter of fact, I have to admit that I never played this game: while I was very aware of The Staff of Karnath (never finished it, though. Just too hard for me…), this one really went below my radar. Yet, I didn’t want to let the month of June to turn into July without a closer look at this title, and so I searched the net for news.

Usually, the reviews of the critics we post in the article, as found in the beautiful Martin Grundy calendars, closely match what users thought of the game when it first came out. This time, though, players’ reviews were really harsh and judged the game way too repetitive (endless corridor walking), with poor sound and generally uninspiring gameplay. Some users even blamed Ultimate for “consistently delivering good games on the ‘Speccy’ but treating Commodore owners with disdain“.

Finally other users, despite loving “arcade adventure games“, not only deemed this title a “pretty poor effort“, but also stated that “what’s more worrying is that this is regarded as one of Ultimate’s best efforts on the Commodore- that should give you a clue as to just how poor their other games are…”.

As said, I never had the chance to try this title out, and that’s why I won’t give it a score. If you had, back in the day, would you like to share your thoughts with us?