I have to start with that I have never been a fan of the series, well that is actually wrong as I did enjoy the last game Absolution which came out on the PS3. Absolution was not as I expected as it was pretty much linear and I would say that the gameplay and design were quite good.

So, why go for this premium box then if I was not a mega fan of the series? well, I thought that the pictures and teasers of the box looked really cool. I decided to go for it, and maybe I was a bit too quick as there was one thing about this game that I did not know… 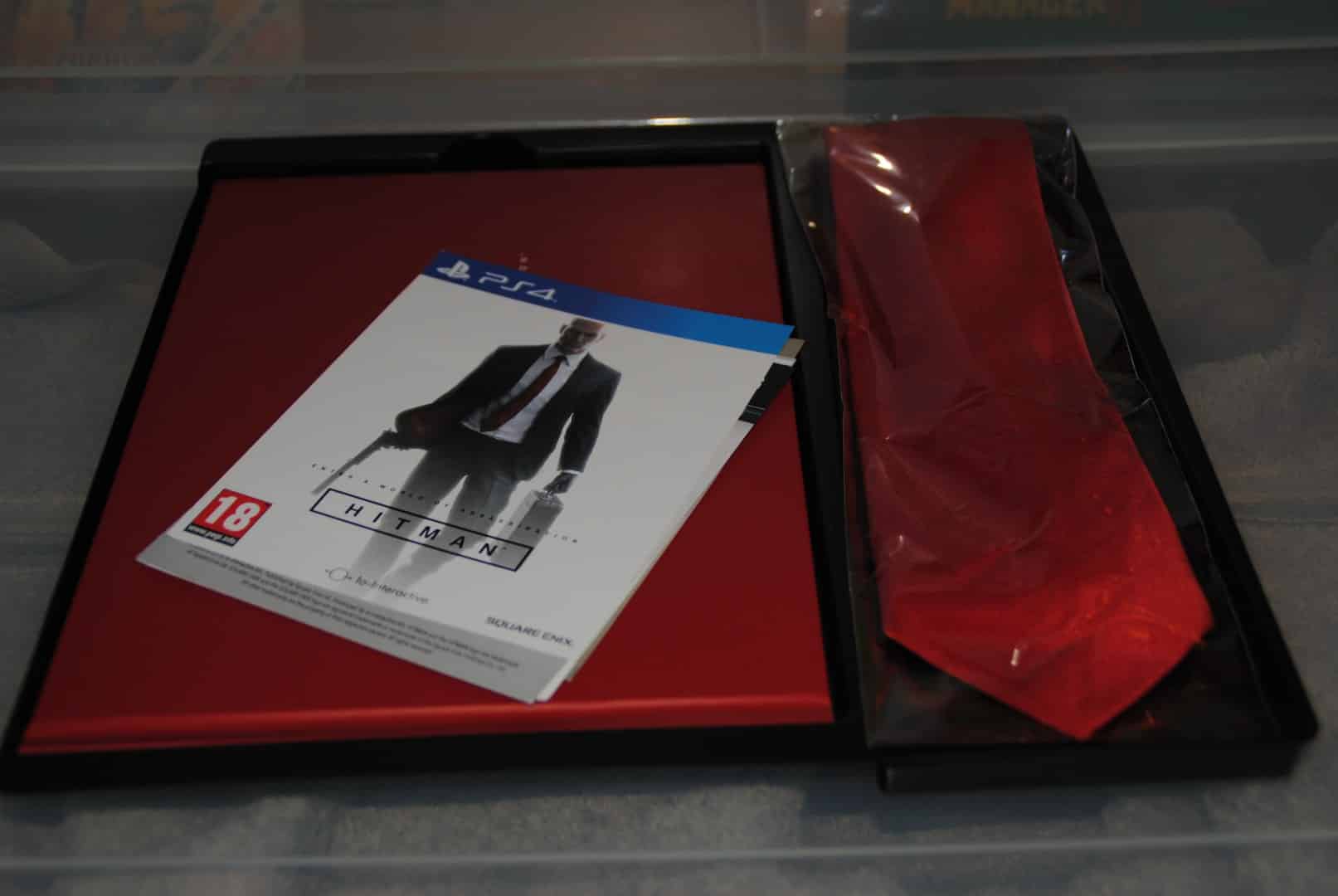 I opened the box and while I did that I noticed a small note on the box and that basically said, no disc game inside and that PSN was required to play the game. Ok? what is this then?.  When I opened the box (pictured above) the first thing that I found was a DLC code for the thing I thought would be the game, nope it was episode 1 of the game.

I went from excited to pretty pissed and it did not help that the game was not supposed to be ready before in 2017 and that with the DLC code and season pass included you will get the episodes once they’re out.

So why am I angry?, well here I paid for a huge box with loads of stuff and the game is just a teeny weeny episode, I guess I should have checked up on the game a bit more before ordering it. 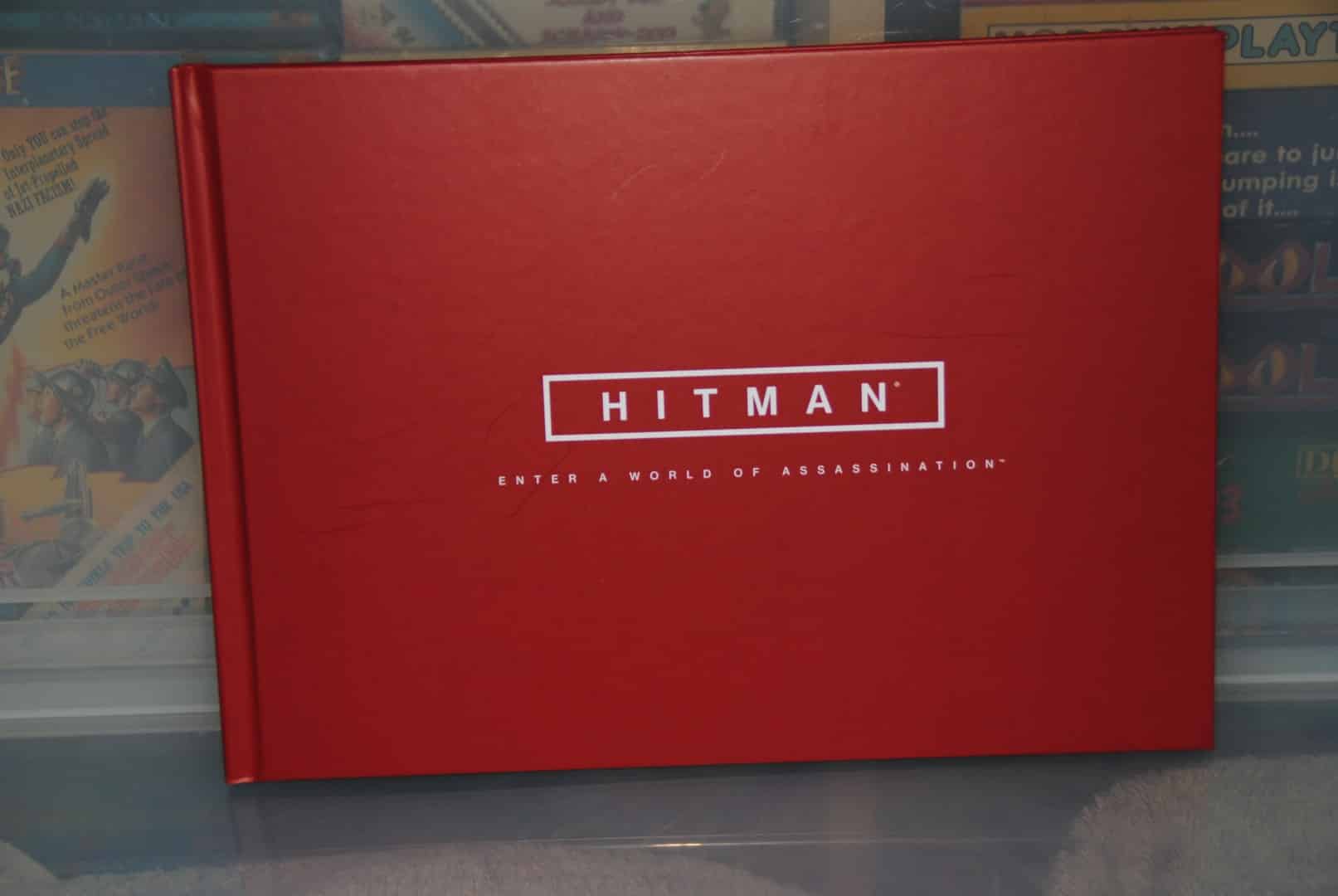 The Artbook inside the box is presented with a good looking red colour, the size of the book is A4/Landscape and the binding seems solid too.

Very colourful Artbook with a lot of good concept art and most likely scenes from later episodes too. The collection seems to get better now, and by the looks of things it is making up for the episodic and Digital only crap above. 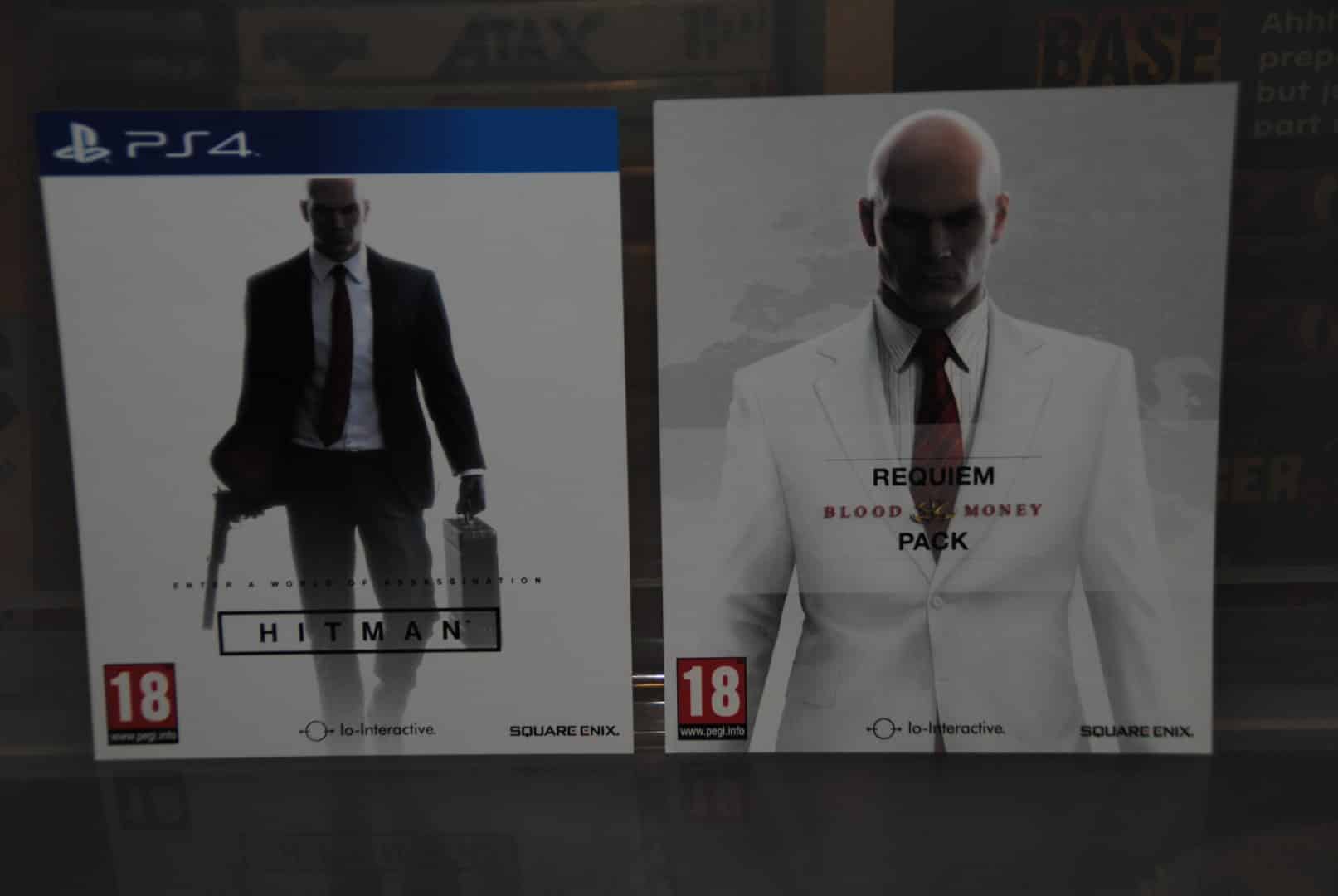 Looks like a cover but it ain’t, just 2 pamphlets for various DLC, good design too.

Promotional pamphlets for Just Cause 3 (My review of the CE), the brand new IP Hitman Go as well as the upcoming Deus Ex is also included, the Deus EX one just made the wait longer, it was supposed to be out this winter but it been delayed till August.

So what is better than getting a new tie and a tie-pin? ok, I know a piece of barbwire or a strangling wire would have been even more awesome, but the tie will do for now.

The colour is true to the real thing from the game+movie and slick as hell, best of all is that it fits me and that the clip looks super sexy.

A black suit and this tie will do magic at parties for sure. 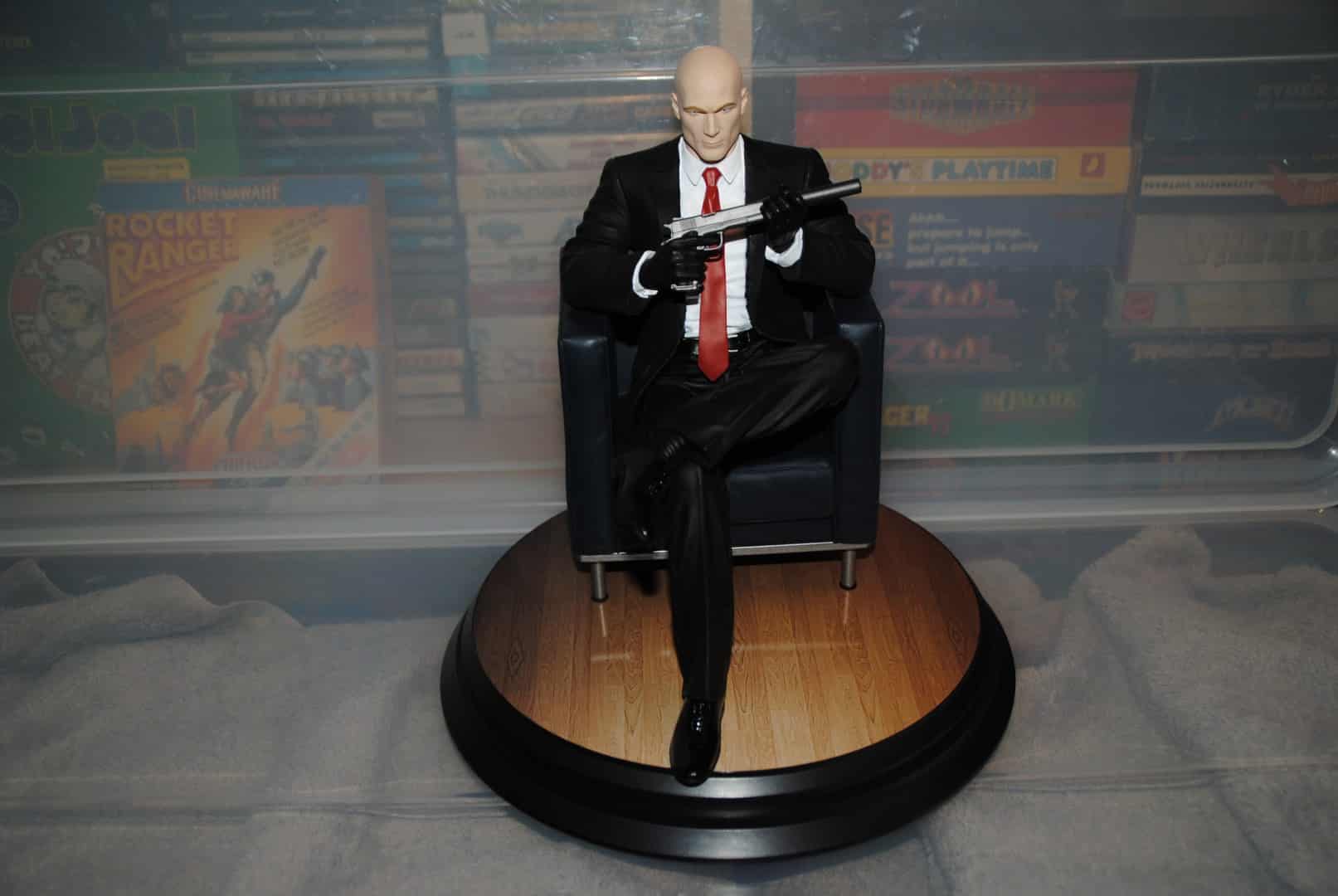 And now over to the reason why the box is so fricking huge, yep the figurine. What a monstrosity, a heavy one too. The details are there and while I have seen better I still gotta say that this one will sit nicely on anyone’s shelf, and to many, it would most likely be the best one.

A few more angles of the main figurine, the barcode is there, and the details on the chair/posture on both front and back are in line with the rest of the figurine.

The positure looks great and it is pretty much as cool as Agent47 could get,

A closer look at the details, the shoes almost looks real, the only thing missing there is a real shoestring, the plastic/composite used looks awesome but it is not the real thing.

Agent47’s face looks good although there are few details and a bit too “Klein”, feels like something is missing.

The gun, tie, and shirt have to be the best part of the figurine, the details and design are absolutely amazing for such a character and collection figurine. 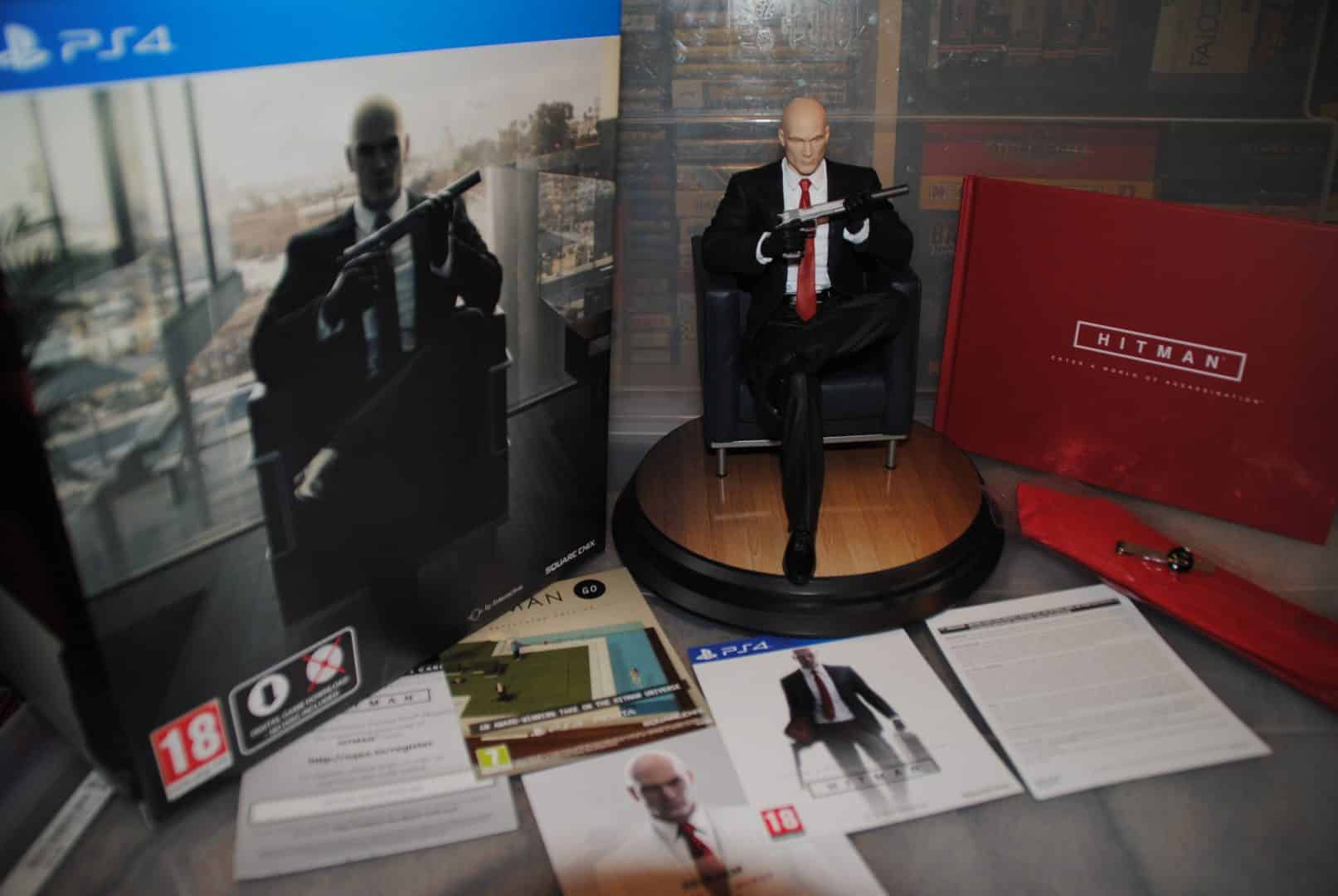 A picture of everything in the box, not all that much and while the tie, artbook, and figurine are awesome it still pisses me off that the game BD ain’t in here and to make it even worse it is an episodic game.

I will most likely wait 1 year before I will play the game as I hate playing a game with months between each part and in the end I will just forget what happened earlier, it happened with me in Wolf Among Us, The Walking Dead etc.

So a final verdict, the stuff inside is mostly good but the game part drags the score down.

Feel free to let me know what you think of the game, and if I should just play it now or wait till all the episodes are out.

3 thoughts on “A Look At Hitman Collector’s Edition”