Welcome back Shovelware, we have not missed you! This might have been your first thought when you heard about this new Looney Tunes game.

It is no secret really, i like many crap games (rated by critics as average or below) and sometimes even games that people call shovelware.  Is this one of them? 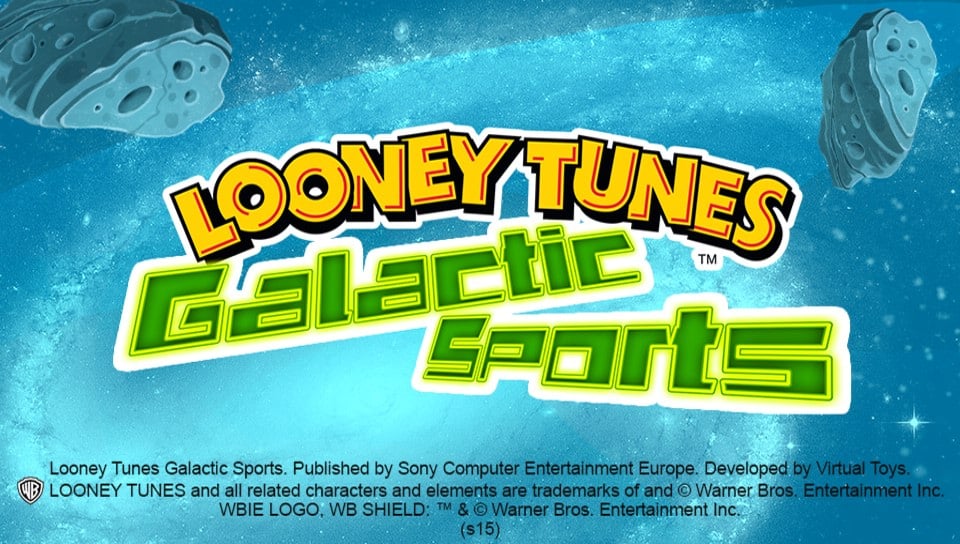 Galactic sports was a very welcome addition to my Vita games library as there has been next to nothing of either licensed cartoon games nor mini-game collections on it so far. Yup that is what this game really is, a collection of minigames, and a small one at that may i add.

Looney Tunes Galactic Sports looks good and i have no complaints regarding the presentation. It feels solid from the start and nothing like a ca$h cow although it does have its problems, more about that in the bottom of the article.

There is a level upgrade/progression system in the game and it works great as it adds a little bit of tension due to the difficulty going up, the only option then is to grind a bit, luckily it ain’t an endless grind.  The characters are free but the weapons costs in-game money and both of them are unlocked at certain levels.

There are enough tournaments in here to last a few hours and the replayability of some of them is quite good, but best of all is that once you have completed all then you unlock a whole new game part, which is more difficult etc. Each tournament has its own difficulty level and amounts of minigames.

This Space Race thing is pretty straightforward and feels like many mobile endless runner types of games, this one though can be controlled with the Analog sticks, D-PAD or touchscreen.  It is lap based running and it is the usual Jump or slide type of gameplay, works well too. Draw distance is fine and the tracks are nicely designed although quite same’ish.

Next minigame up is Space Golf, yet again presented with great design and good controls, nothing in here that screams rush job. The goal of this part is to pot one hole although there are lots of obstacles and hazards. This part is also littered with bonuses, bonuses you should take as then the grind won’t be so long towards the end of the game.  Really happy to see how the developer decided to make use of proper controls as well as a touchscreen and made them optional.

Next up is Space Boxing, nicely presented and yet again the controls and response work great. Boxing games and such tend to be annoying and slow but this minigame works and i found it pretty enjoyable. This event is quite easy the first few levels but the last one was actually “almost” a little hard but since you are only required to get a bronze medal, well that one was achievable without much aggression.

Next up, Galactic Archery. Ok, this is the only event in the game that is frustrating and annoying, the controls work i guess but it is cumbersome and takes too much space (no pun intended) around you as you control the aim with the six-axis movement thing. Do not attempt to play this part in a plane, a bus or in a car. It took me a while to figure out the point system in this one but eventually (after a few fails) i found out that it is colour related. Red boxes give the most points and blue the least etc.

Next up is Aquatic Sport…  This one is quite fun actually, you move around in a small “boat” and pick up numbered items. The items have to be picked up chronological and that can involve a few challenges.  The level is a small pool, 4 players max can take part and you have one standard weapon (+ all those you unlock via the progress system) and that weapon is a boxing glove which you can hit the other players with, if you manage to hit them (it is hard) then they will lose the items they have on them so it is wise to cash in the items from time to time.

Next one up is the final one, Trap shooting. This game is an “on Rails Shooter” which means that the vehicle ain’t controllable, the only part you can control is your aim. You fly around a set path and enemies pop up in front of you, the only thing you have to worry about is to not shoot the red spaceship thing. Works good, the graphics are good and the controls too. Various power-ups that you gain in the level progression system helps this event a lot so if you get stuck then just grind in some easier event like Space Golf or whatever to get enough points for a new power-up. 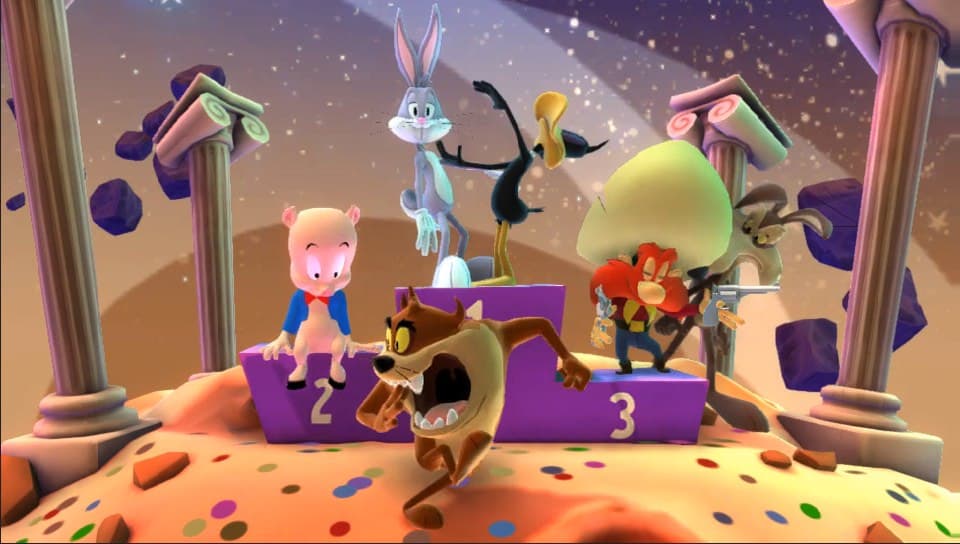 So there you have it, if you fancy a minigame collection then this is one solid option. I hope there will be more licensed games for the Vita, i have yet to buy that Muppets game that came out a while back but i will get it soon as it is made by the same developer as this one (Virtual Toys).

There are two very bad things about this game though, the price is too high and it has no platinum trophy either to boot. I have no idea why both this and that Muppets game got no platinum trophy as both seem big and varied enough for 25+ trophies.

Edit: Stop press, i found another bad thing about the game and that is that the multiplayer option is limited to AD-Hoc only, neither local nor online multiplayer in here.  The most annoying part here is that there is a trophy for playing the multiplayer too which means the game will stay at 95% complete or something forever…

1 thought on “A Look At : Looney Tunes Galactic Sports”