The One Piece franchise has always been a bit of a curiosity of mine, they have always ended up on the backburner when compared to other Namco/Bandai gaming series like for instance Naruto and such, and no I don’t know why other than the – it just happens -.

I signed a Bandai Namco deal a few years back to get some collectables and such and while I haven’t received all that many through the years there was that brilliant looking Naruto Ultimate Storm 4 collectable and then there was that insane looking Dragonball Xenoverse 2  figurine which is one of the best in my collection for sure, oh and i must mention Dark Souls III of course too, there are others too but I won’t mention all of them now… 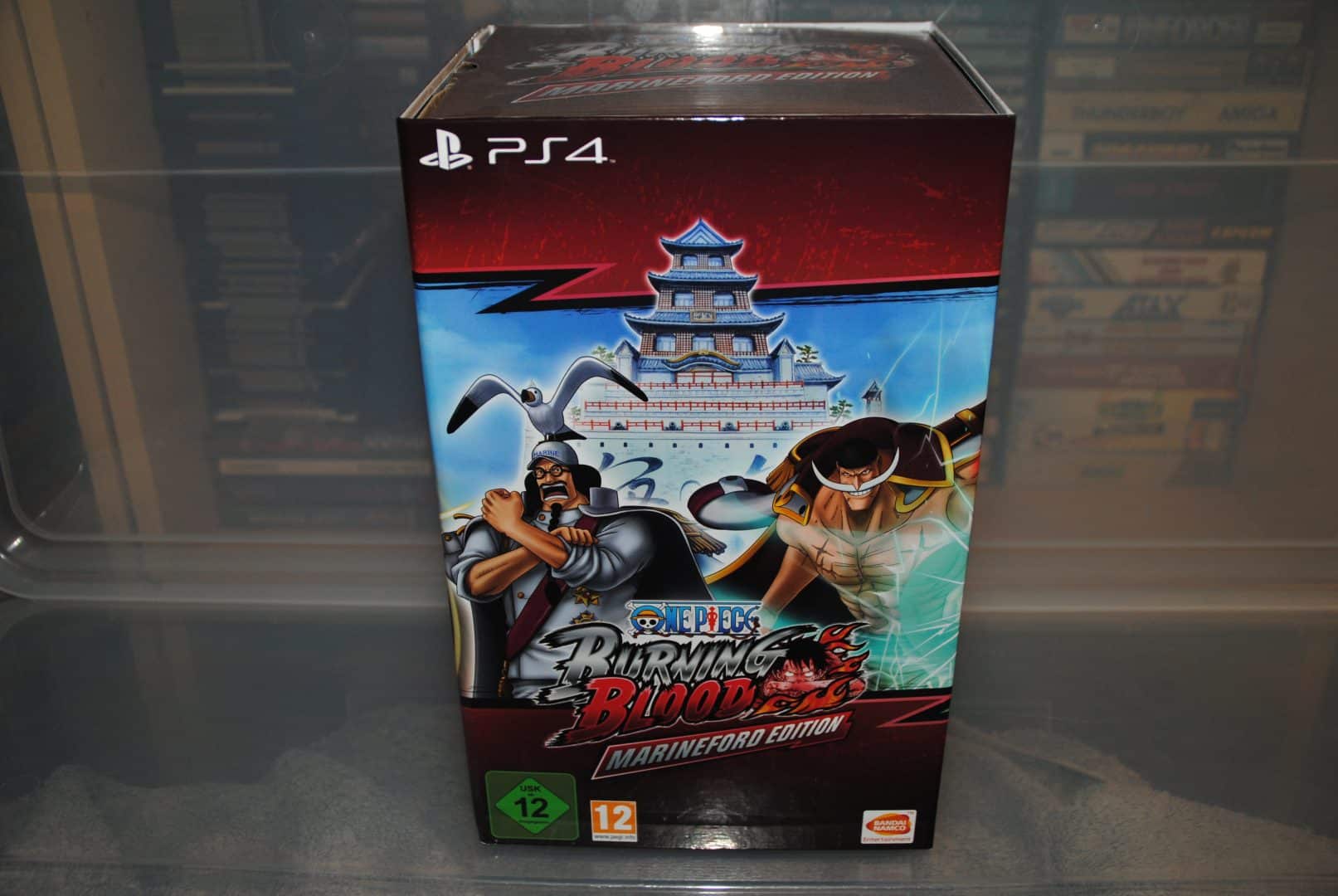 The first thing that strikes me when I look at this box is how typical Japanese it really is, typical art style, good use of colors and then its that name – Burning blood, Marineford edition – , sorry for the language but I just have to say it – WHAT THE F*CK DOES THAT EVEN MEAN? –.

The box design is of top quality material with a nice glossy finish to it, everything looks like nothing else in my collection, all four sides have a spectacular look to it and the best way to describe how I feel about is that I end up turning it in various angles at the shelf as I can’t decide which one of them I think is the best one. 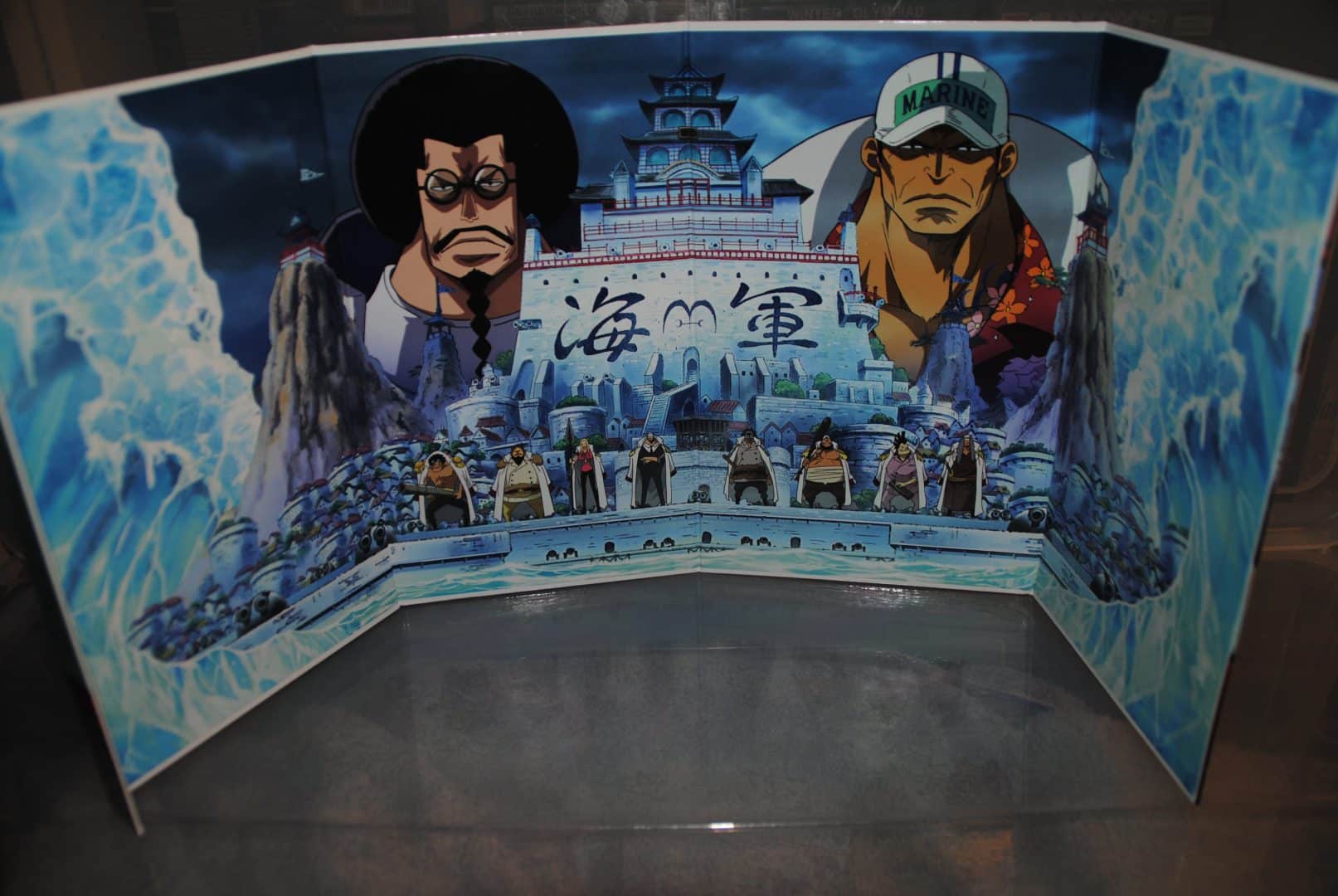 Its all of the above and then some, yes it’s an awesome looking cardboard sleeve with a very cool glossy finish to it which is actually a background thingy for the figurine (unboxed later in the article).

The box looks awesome before I opened it, but this background image looks damned good too which will make it harder for me to chose which way to go with the display case for the box at a later point.

With the sleeve removed, comes this…

Another box inside what I first thought was the box which at first glance looks really good too right? well, sadly not as this box is actually more of a cheap style box design which is softer and not glossy or whatever.

The four images are really good, the design is good too but the paper quality feels off and a major let down to say the least.

Ok, so that’s the first negative thing about the box, and hopefully the last one? 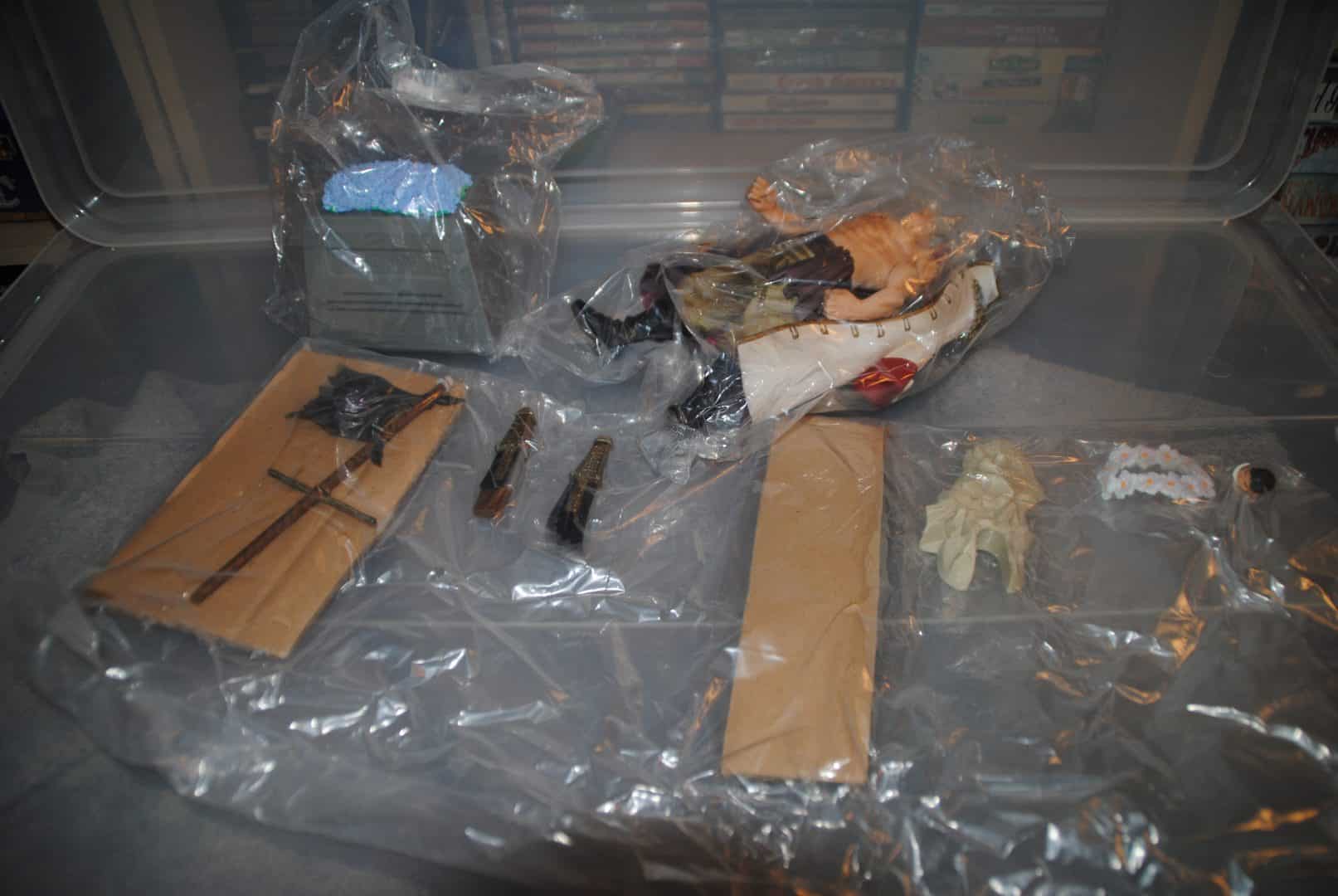 Not another IKEA figurine? (Tales Of Zestiria was the last one I got), nooooooooo!, look at all these parts… this is bound to break while assembling it right?.

The parts look very good actually and the build quality seems much better than first anticipated, although putting it all together was a bit of a “is it about to snap in half” kind of thing due to everything was very tough to fit.

As always, I did way too many pictures of the stuff and I do know you guys *our readers* love lots of pictures, anyways here you can see some random shots of the background and figurines in action. 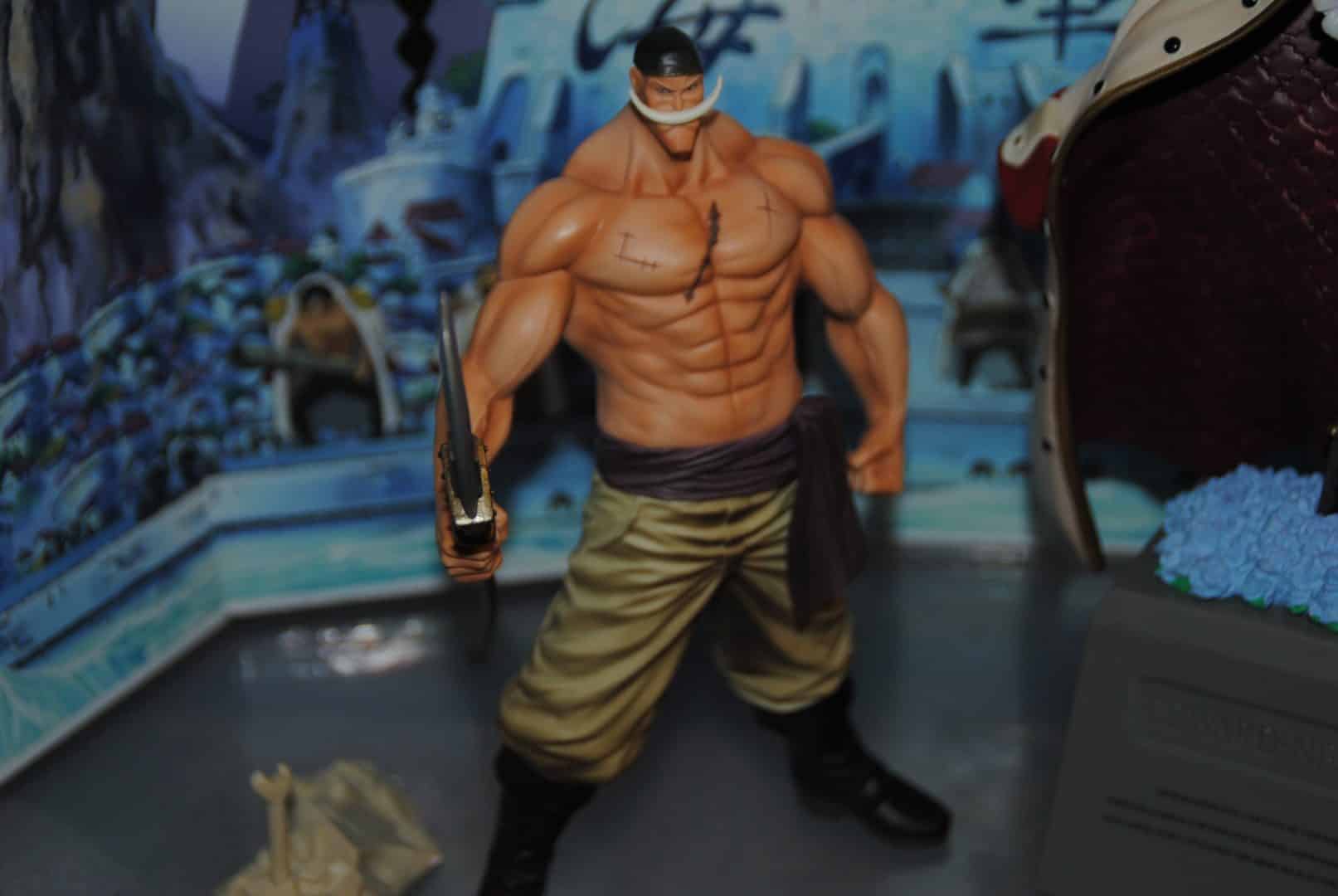 The details on the figurine are far, far away from the quality of the Dragonball Xenoverse 2 one for sure, but still pretty good and I have to say I love all the small touches here and there.

Seriously cool looking shots, I spent some time here to get the right light and focus to be able to show the details better.  – I personally love messing with Depth Of Field functions 😉 –

I hope it was worth it. 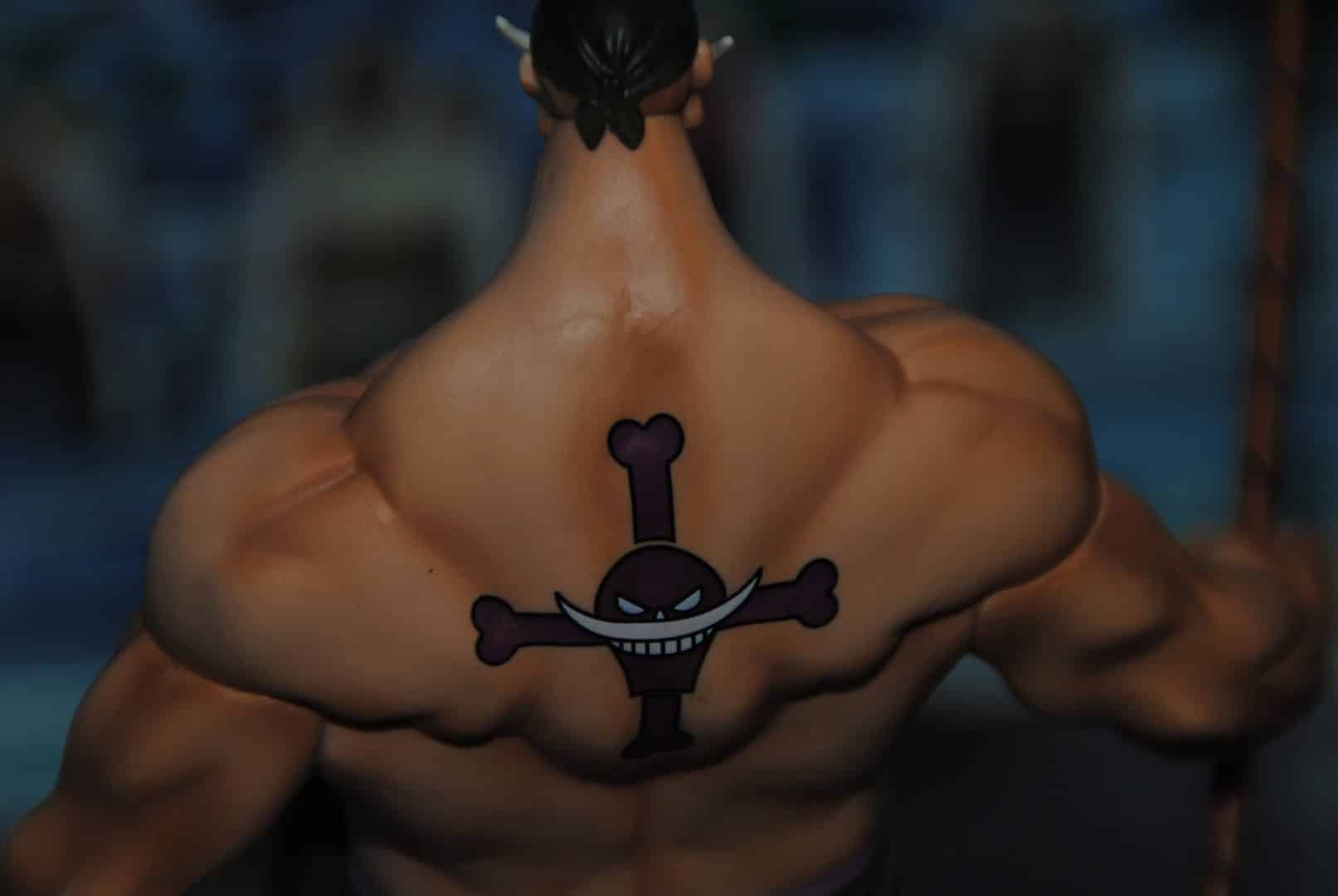 With some light trickery on the camera and a few tries, this was the final result to get the details and shadows to show properly, one thing is for sure and that is that I really need a better camera room. 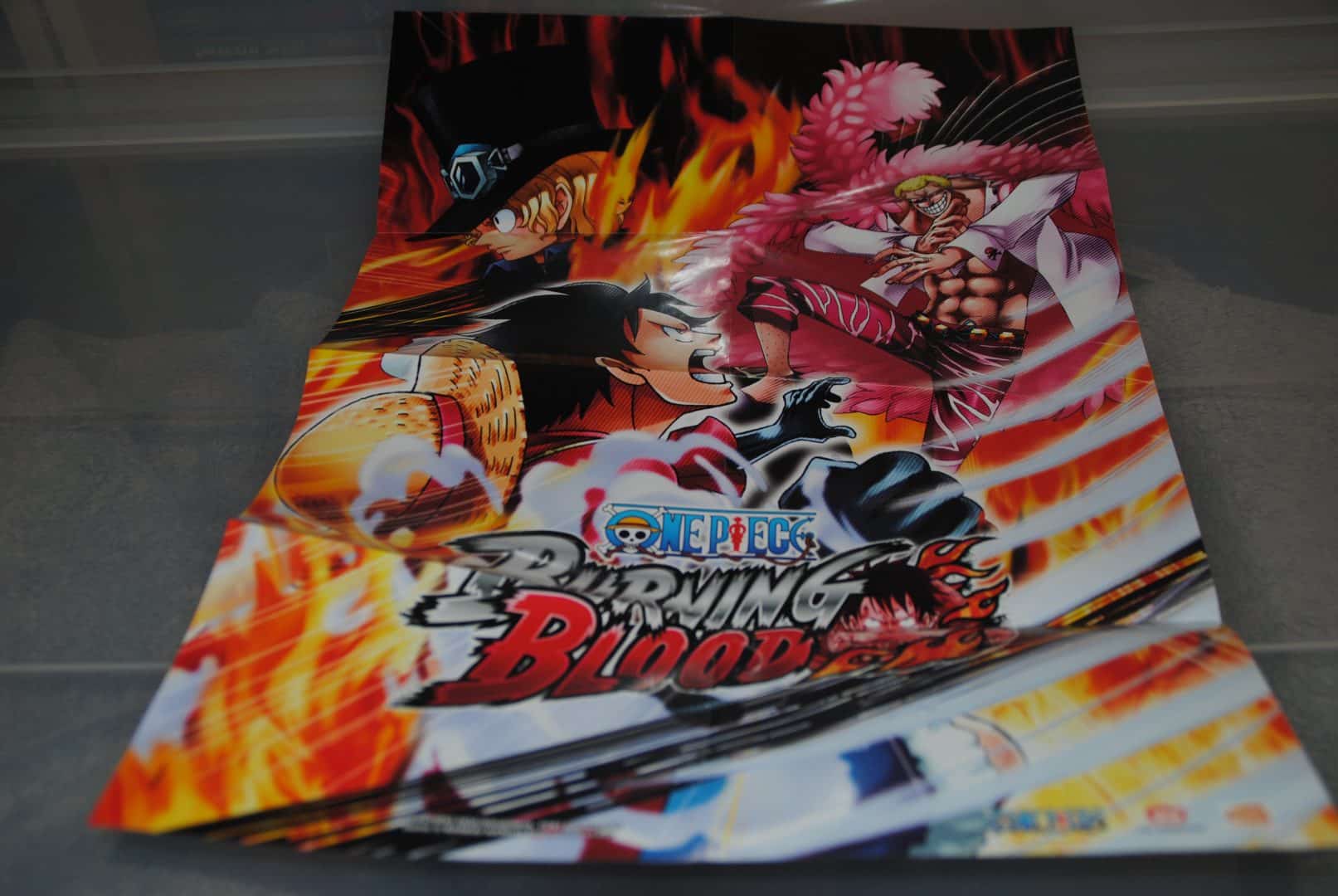 There’s also a pretty good looking poster included in the package, it ain’t huge but just about right which is A3 Wide.

The poster is identical to the front side of the Blu-Ray box, more about that one shortly.

Here you can see the game box, a good looking one and while I somewhat would have expected a steelbook from a collector’s edition like this one, well I guess I can’t have everything. 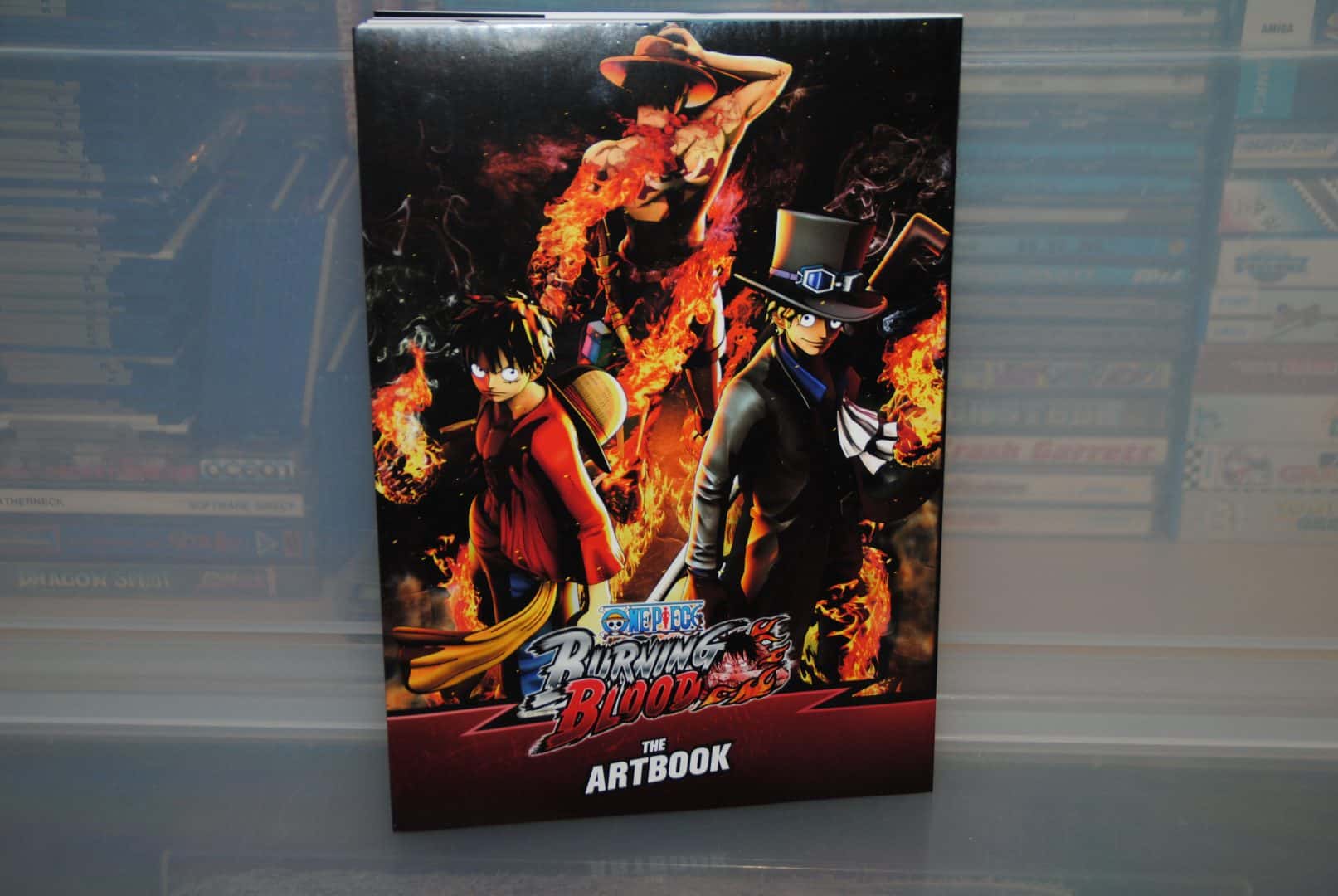 In good Asian tradition, the book goes from right to left and at first glance, it looks a bit cheap, but luckily this is not the case once you open it.

The A4 format helps on the score here, I am so sick of those bloody A5 ones by now.

Lots and lots of pages in it, well worth the asking price of the collector’s Edition box alone. 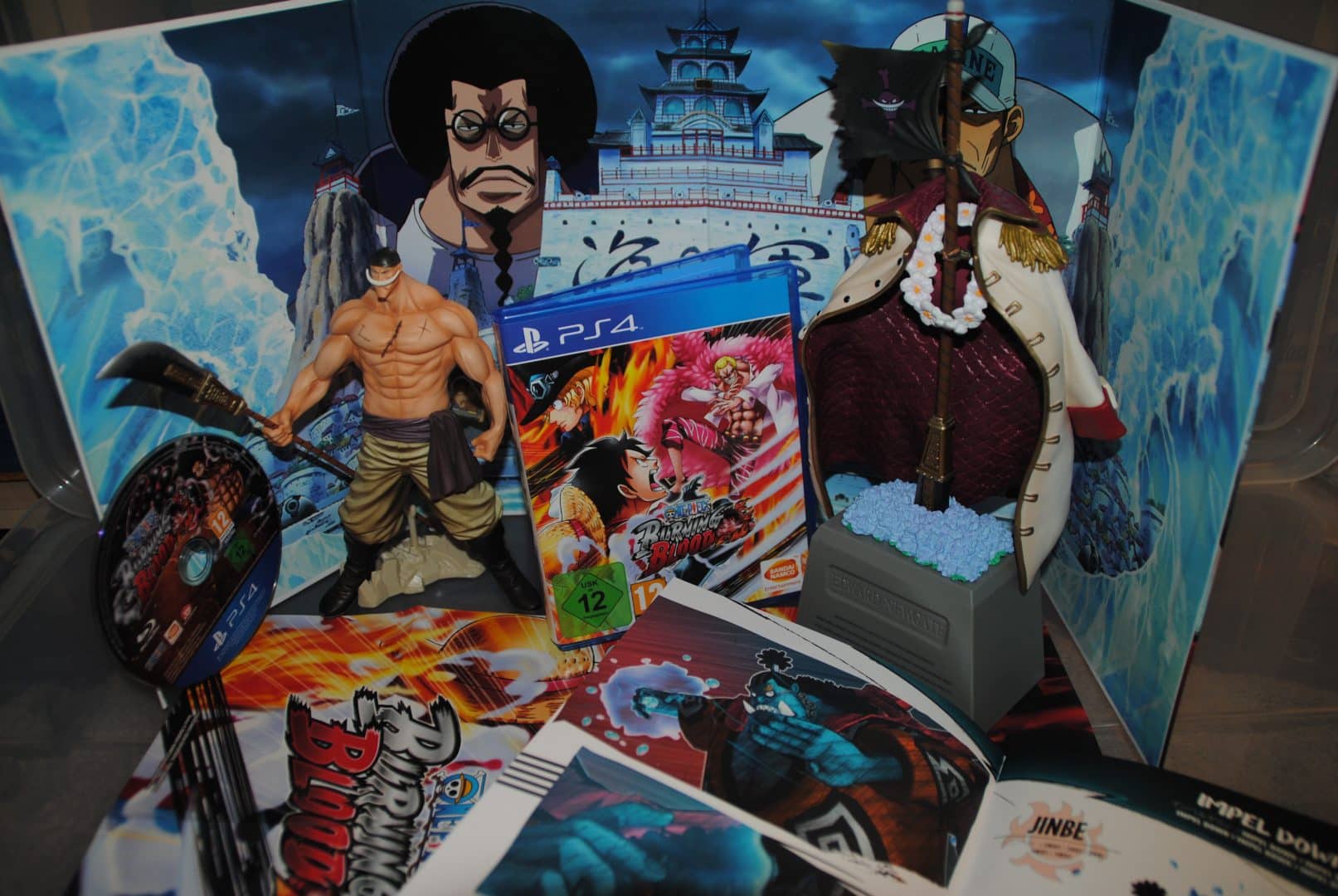 So there you have it, One Piece: Burning Blood Marineford Edition in all its glory, a brilliant collection that most Anime and OP fans would love to get hold of for sure, how many of these things were made?  I have no idea really, but based on some searches it looks like it goes for 100-120 Euro’s on eBay and the likes, and yes it is most definitely worth that price tag.

I really like the figurine and the main box design is absolutely brilliant, the artbook is the best bit in the box for sure but all in all, everything is way beyond my expectations of such a box like this.  I have not tried the game yet sadly so I won’t give any review or thoughts about it, for now, the worst part is that I got this game about 8-9 months ago now, backlog sucks.