Widely considered to be one of the greatest C64 games of all time, Pitstop 2 is a split-screen racer that can be played against either the computer or a human opponent. The game requires elements of strategy, as well as racing, as players need to keep a careful eye on their tyres and fuel gauge and judge pitstops accordingly.
Pitstop 2 was hugely popular, winning numerous awards including ‘Star Game‘ (and a score of 10/10) in C&VG, ‘Rave Review‘ (5/5) in Your Commodore, and a ‘Sizzler‘ (89%) in ZZAP!64 who described it as “superb”, “stunning”, “innovative” and “the best race game yet”. 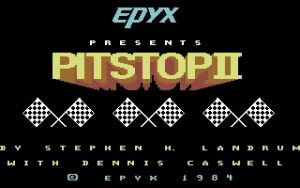 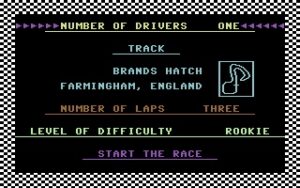 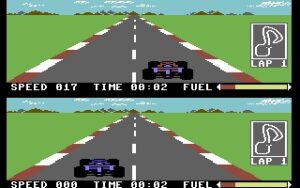 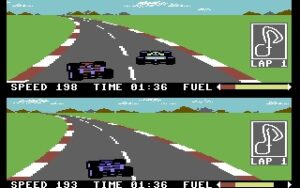 Aside from what are now considered standard features in a racing game (single race, championship mode, implementation of existing tracks), the game gave the best of itself when played in two players mode thanks to its strategic component. As stated above (text taken from Martin Grundy’s calendars), failing to make a pitstop at the right time could lead to terrible results (empty fuel gauge, blown tyre, and so on).  Yet, a pitstop itself, even if made at the right time, would not automatically lead to player superiority, since you had to control the pit crew yourself: would you control the tyre guy (possibly allowing for an overspill by the fuel guy) or waste your precious time to keep an eye on both? Would you change all the tyres or only the worn ones? Despite not really liking racing games that much, this one surely was a must-have since it basically opened the way to a next-gen type of gaming. Do you care for a race or two?