It took quite some time before SkillGrid went gold, much longer than I anticipated in my last (this SkillGrid preview) article anyway. The game hasn’t changed much at all since my last article but a few bugs have been nailed and yes, this lovely big box (that I will review now) arrived at my doorstep the other day.

So, what is this SkillGrid thing then?

SkillGrid is an endless Vertical Shoot Em Up but with a twist as its main focus ain’t exactly shooting everything but dodging and going for pickups is the main focus, you collect points and time and even what will happen next, yes everything is randomly laid out in pickups formed as hexagons.

One thing that is not very common with games like this is the size of the manual and yes it might not look like a very difficult game to understand at first, well let’s just put it like this, READ THE MANUAL (RTFM!) as it will be a gamechanger for how you play the game and even more so how much fun you will get out of it.

One of the problems I encountered while playtesting the game at first was that my brain said that Yellow was the colour of pickups I was supposed to pick up, guess what? I played the game wrong for hours upon hours without even realizing it as the game throws just so much “new” stuff at you and at one point I even talked to the designer and said that I played it correctly yet I struggled to get anywhere in it…  He sent me the work in progress manual and umm yup, it more or less said — PICK UP CYAN OBJECTS and steer clear of the yellow ones (most of the time).

Normally I never got problems to admit when i screw up but this was a tough nut to swallow, I had just playtested the game for hours upon hours wrongfully (and thought I had done a good job too) 😀

SkillGrid is an endless shooter and yes I normally hate those things as I want levels, boss fights and so on but the odd thing about this one is that the more I play it the more I like how it’s evolving and building up, yes I must admit that for me it eventually just turned into a high score chasing game but it works tremendously good as that due to the randomness of the pickups and how you play it.

There are so many different pickups to go for and yes sometimes you even want to reduce your speed and so on, sometimes picking a boss hexagon can be the best thing you do, sometimes that asteroid field can be the only thing that pisses you off, other times not so at all. You are in charge of what will happen, learning to pick up the right stuff will require a lot of trial and error and do not rely on YouTube videos or such to learn how to play it, most I have seen so far play the game wrong or just plain bad.

SkillGrid never gets boring or flat and maybe most of all annoying but it will drain you and raise your heartbeat and yes once you get hooked it will also stress you, a long session with this can be really exhausting too.

YOU WILL MASTER SKILLGRID ONE DAY! 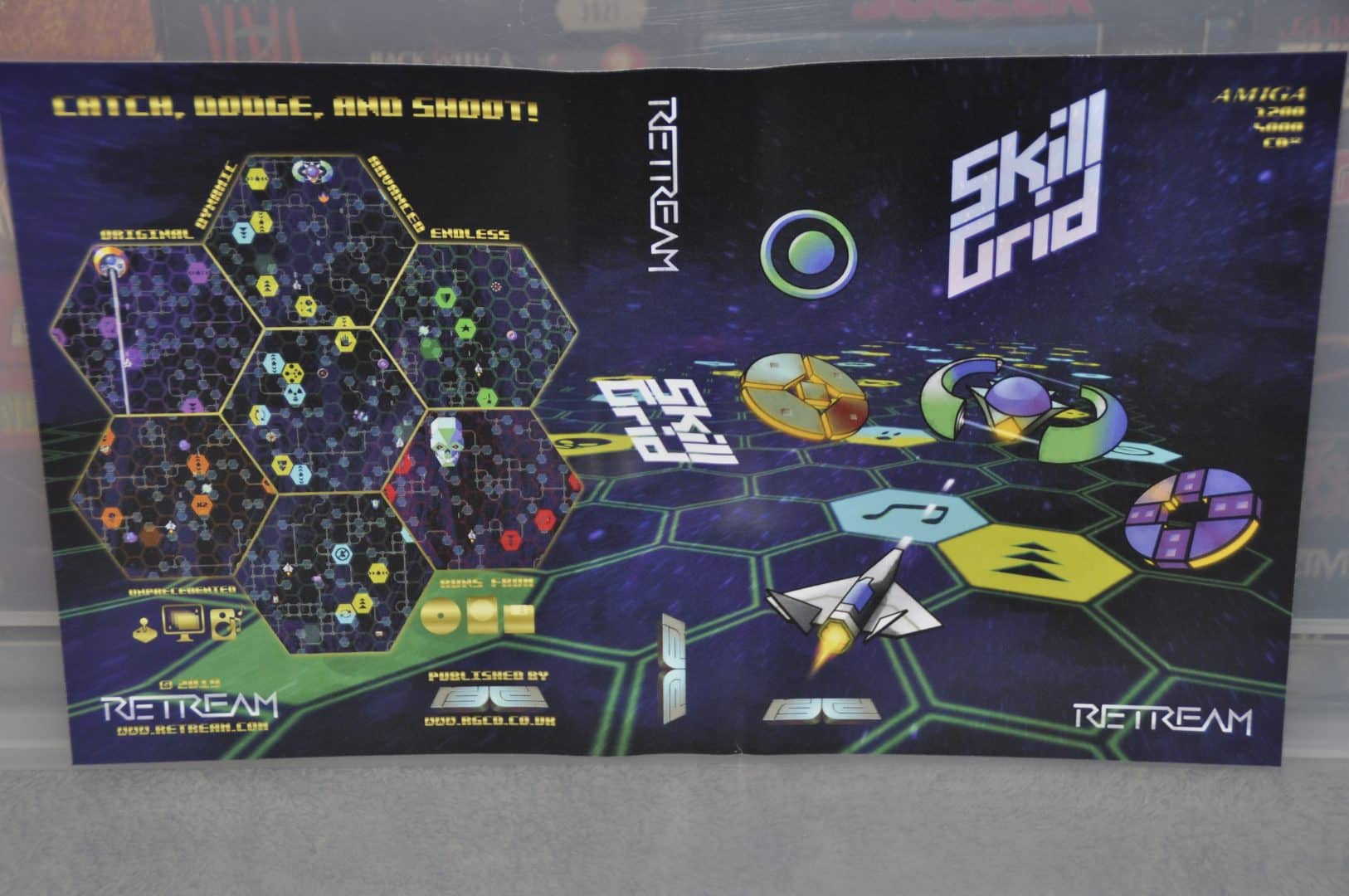 Ok, over to the box design then.

The publisher for SkillGrid is none other than RGCD and this is their 3rd release of this kind, I did reviews of both Tiger Claw and the wonderful PowerGlove half a year ago, feel free to check them out if you missed them the first time around. 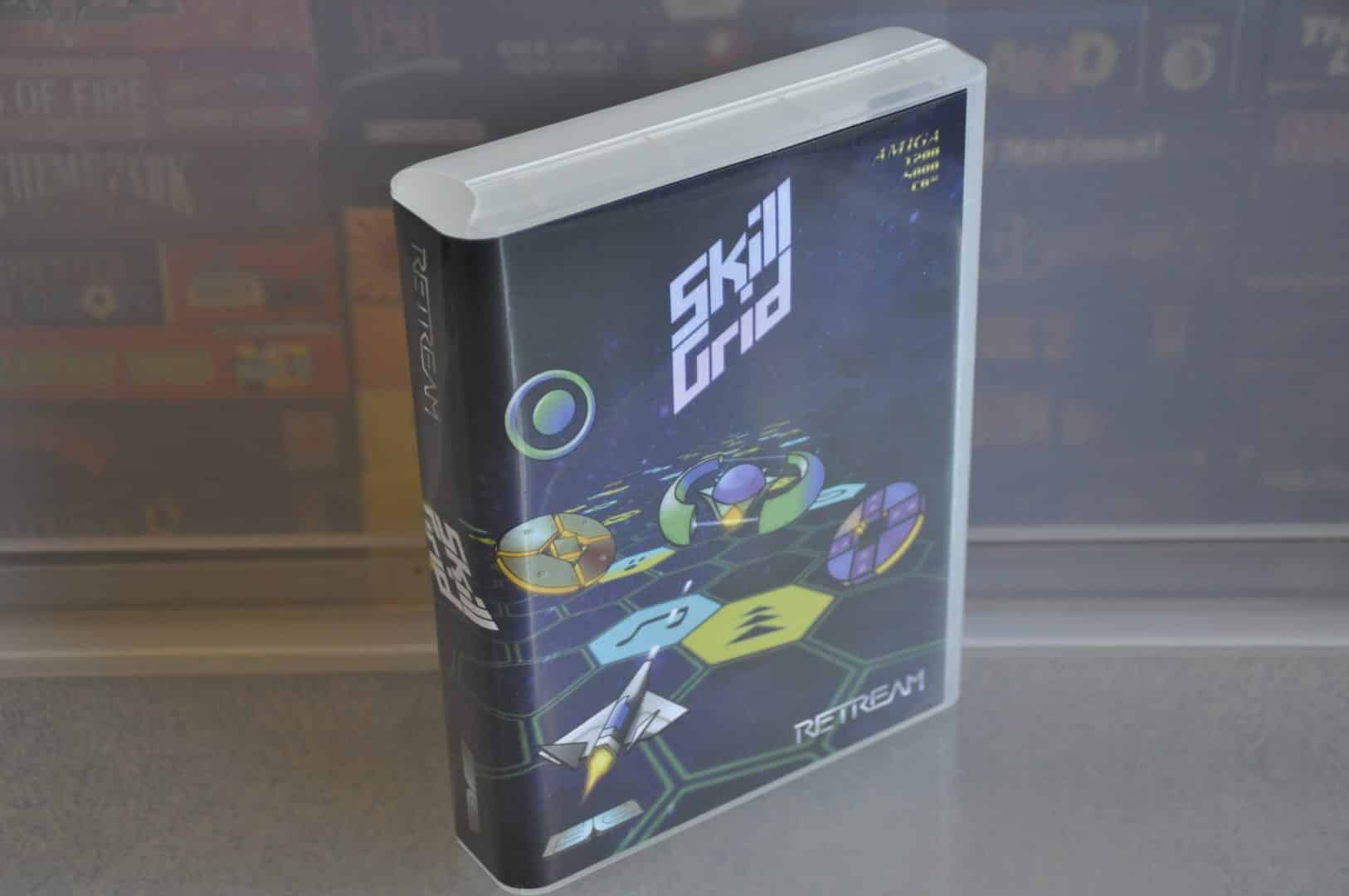 The box design and clamshell style box used in those two games are once again the formula used with SkillGrid and boy does it scream “HEY, LOOK AT ME!” with its rather unique front image.

The front actually reminds me of Zaxxon (some very old C64 shooter) for some odd reason and it manages to stay simple yet powerful with both its colours and design. 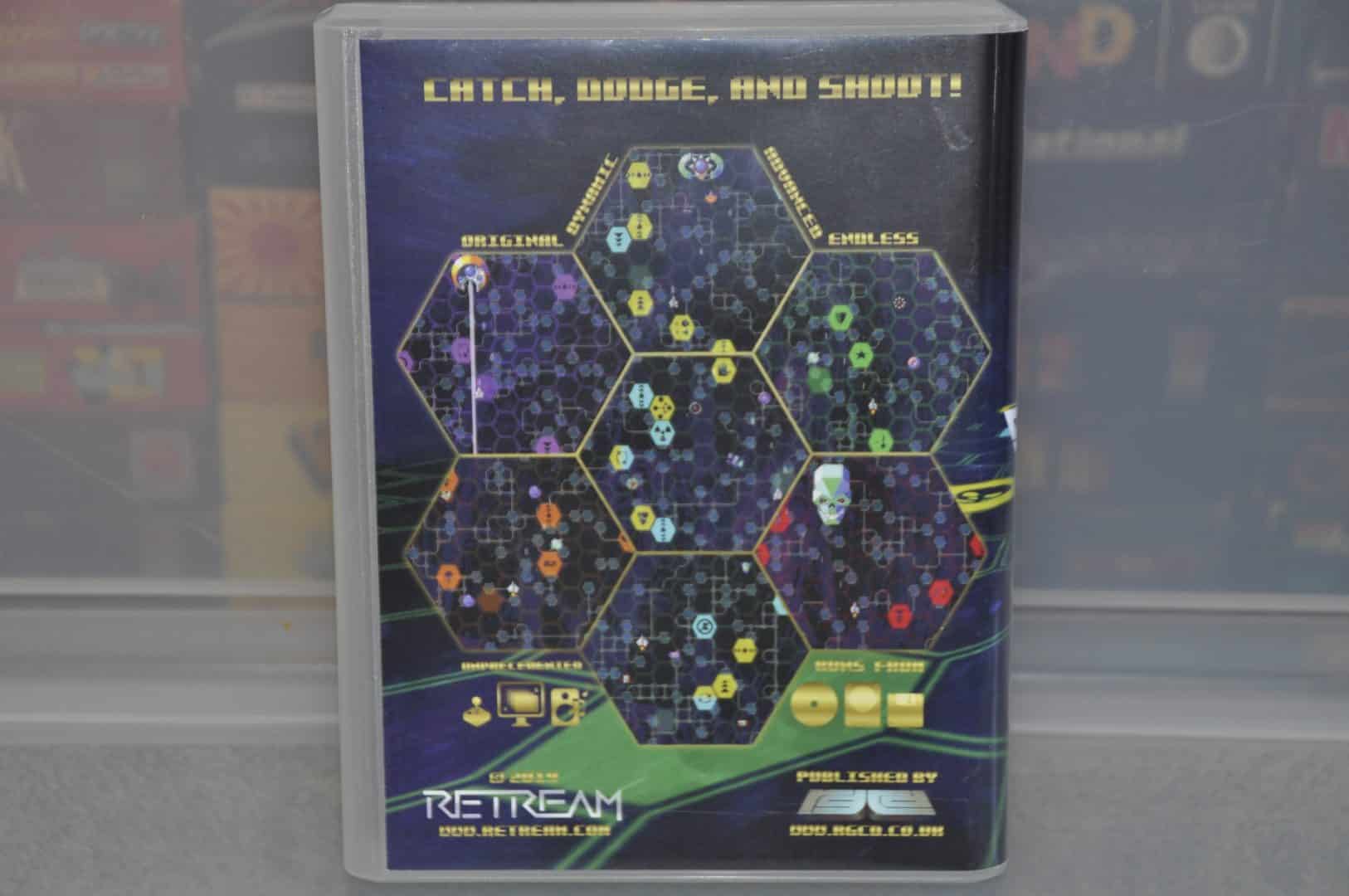 The backside was another thing Simone spent a long time on and it shows, everything is laid out perfectly and the way in-game graphics are used as artworks really good, it might be too subtle for some but once you look at the details is when you realize how awesome the box really is. 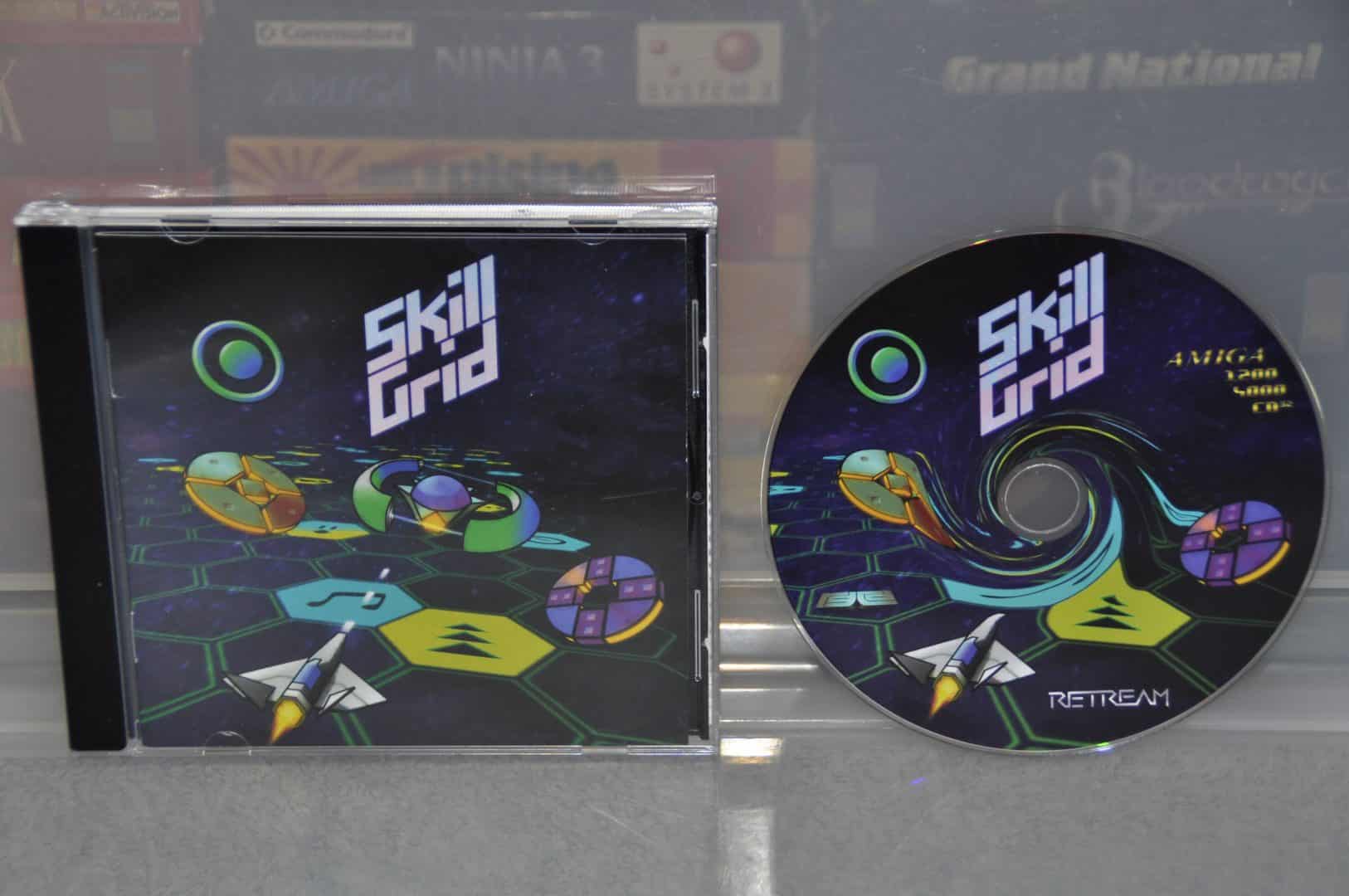 There are multiple versions available and I will look at that later on in the article but both physical versions got the CD version in them. The CD version also boots/works on the Amiga CD32.

The box art is more or less identical to the Clamshell edition one but inside a typical Jewel case and the high-quality print of the cover itself will make a lot of other Amiga titles the last few years look like a budget title compared.

The CD is pressed and it is of the best quality possible, this ain’t homebrew that is for sure, the image used on the CD is another unique one.

The CD also contains the floppy disks(in .ADF format)  and a *.PDF manual as well as a hard drive version. 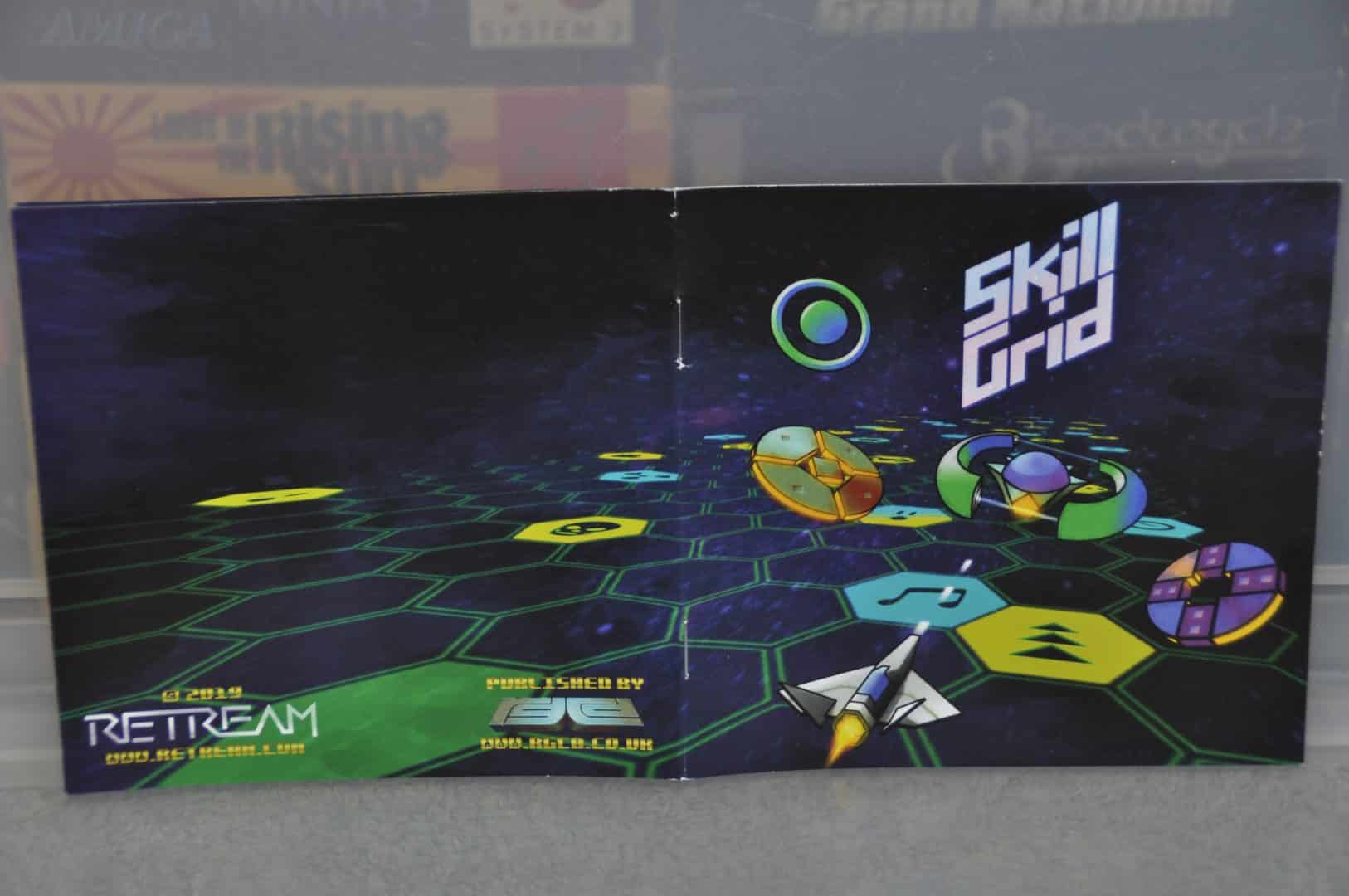 Inside the Jewel case, you will find a rather detailed manual, 16 pages long with a lot of information in it. I have said it several times before but I shall say it again, read the manual as it will be a total gamechanger for most of you.

The print quality is yet again utterly brilliant and i can’t find a single negative thing to say about it.

Simone spent a lot of time on creating this manual and it paid off.

As with most (if not all RGCD) products SkillGrid comes with lots of extras, these four “pins” got in-game objects on them and due to the quality, they came out really good too, clean and really colourful. 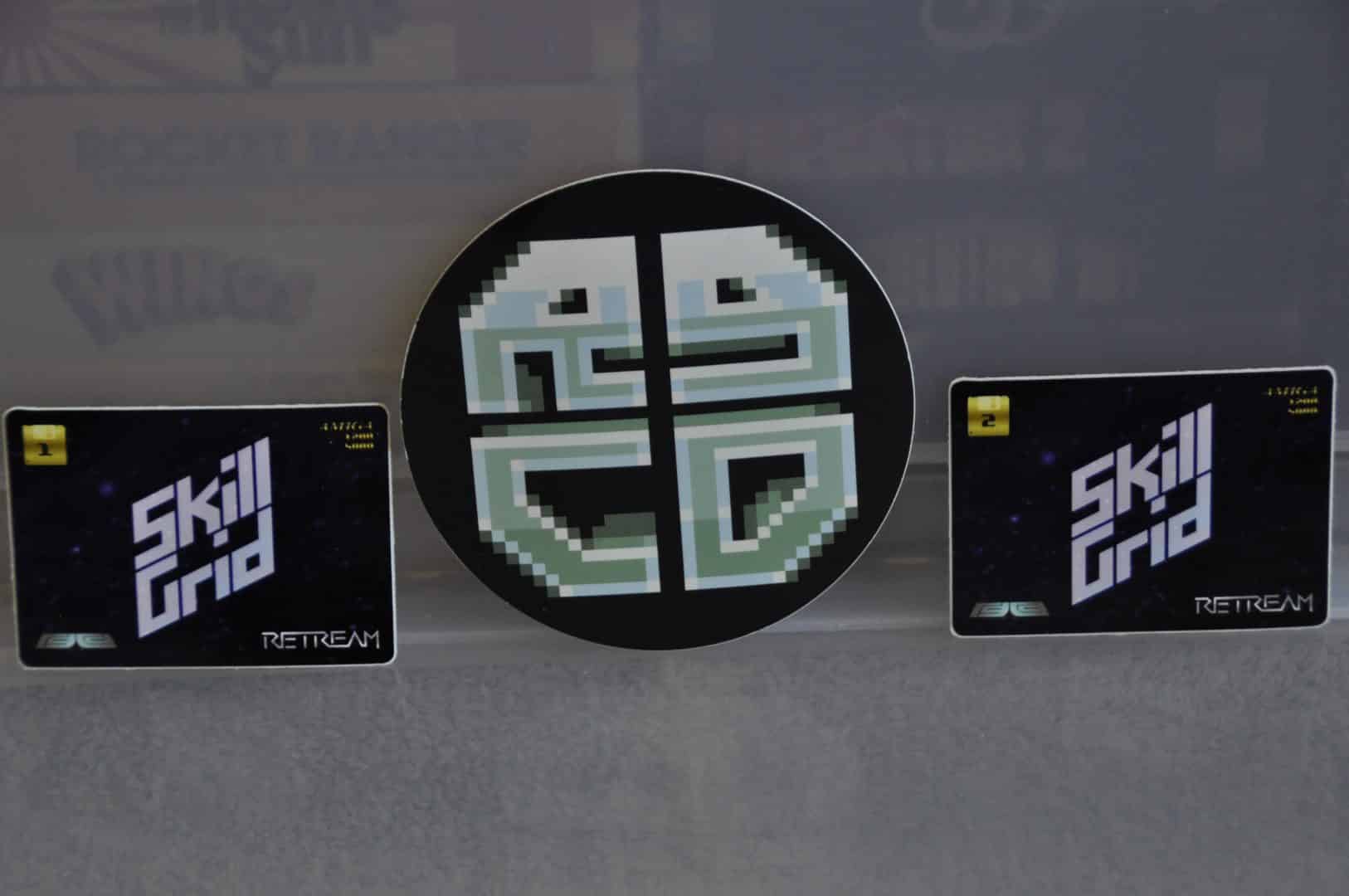 There are also 3 stickers in the box, the SkillGrid stickers are actually extra floppy stickers that are included in the box for those of you who didn’t go for the floppy version.

The third sticker is the RGCD one we saw in earlier releases, a really old-school looking one and a nice way of them to make sure that we won’t forget who published this game. 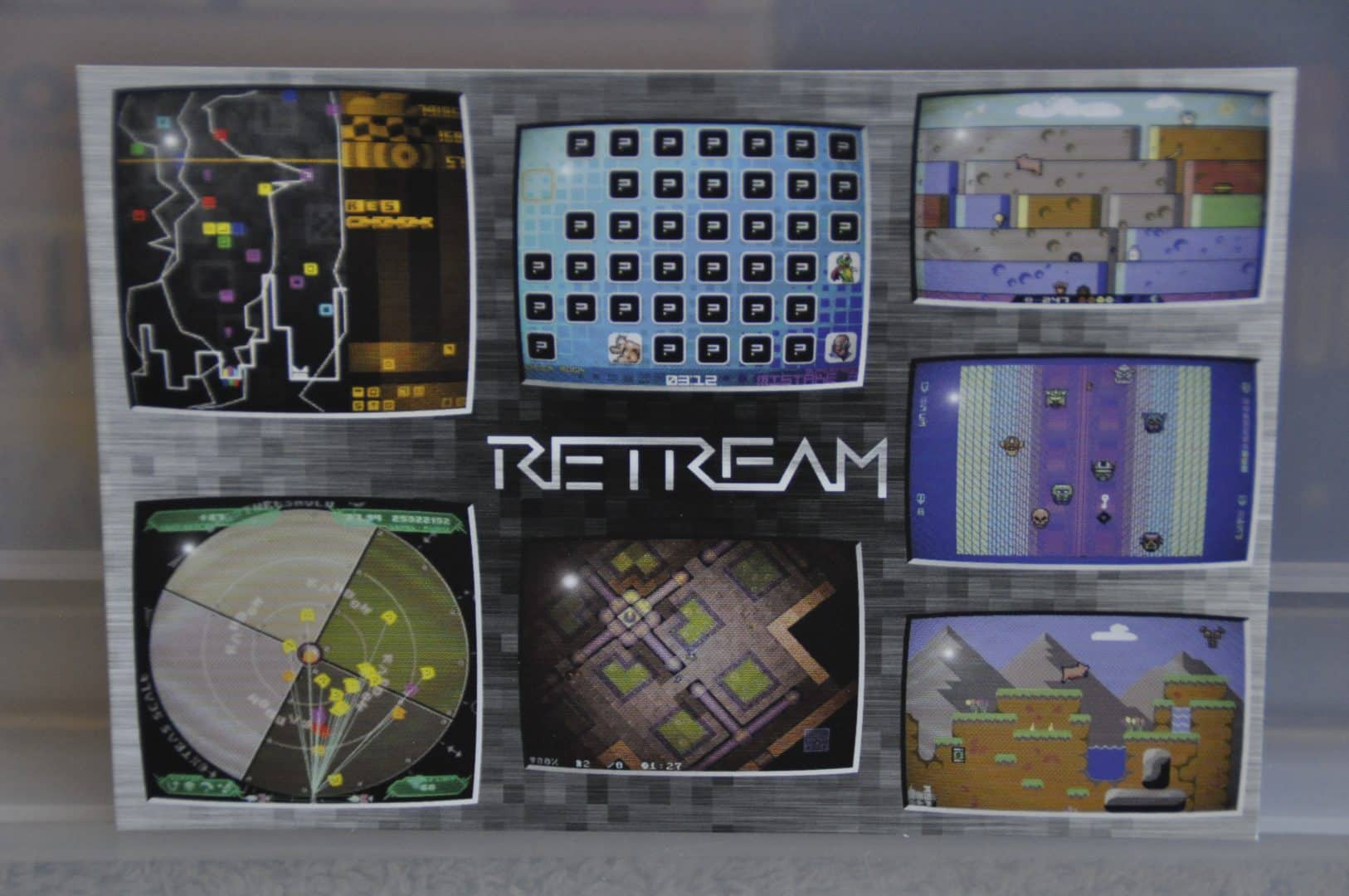 The RETREAM one shows several games that I haven’t seen before because they are for the C64 but I will grab those one day for sure.  Huenison and BOH are on there though, I reviewed one of them many moons ago at least (BOH one still pending…). 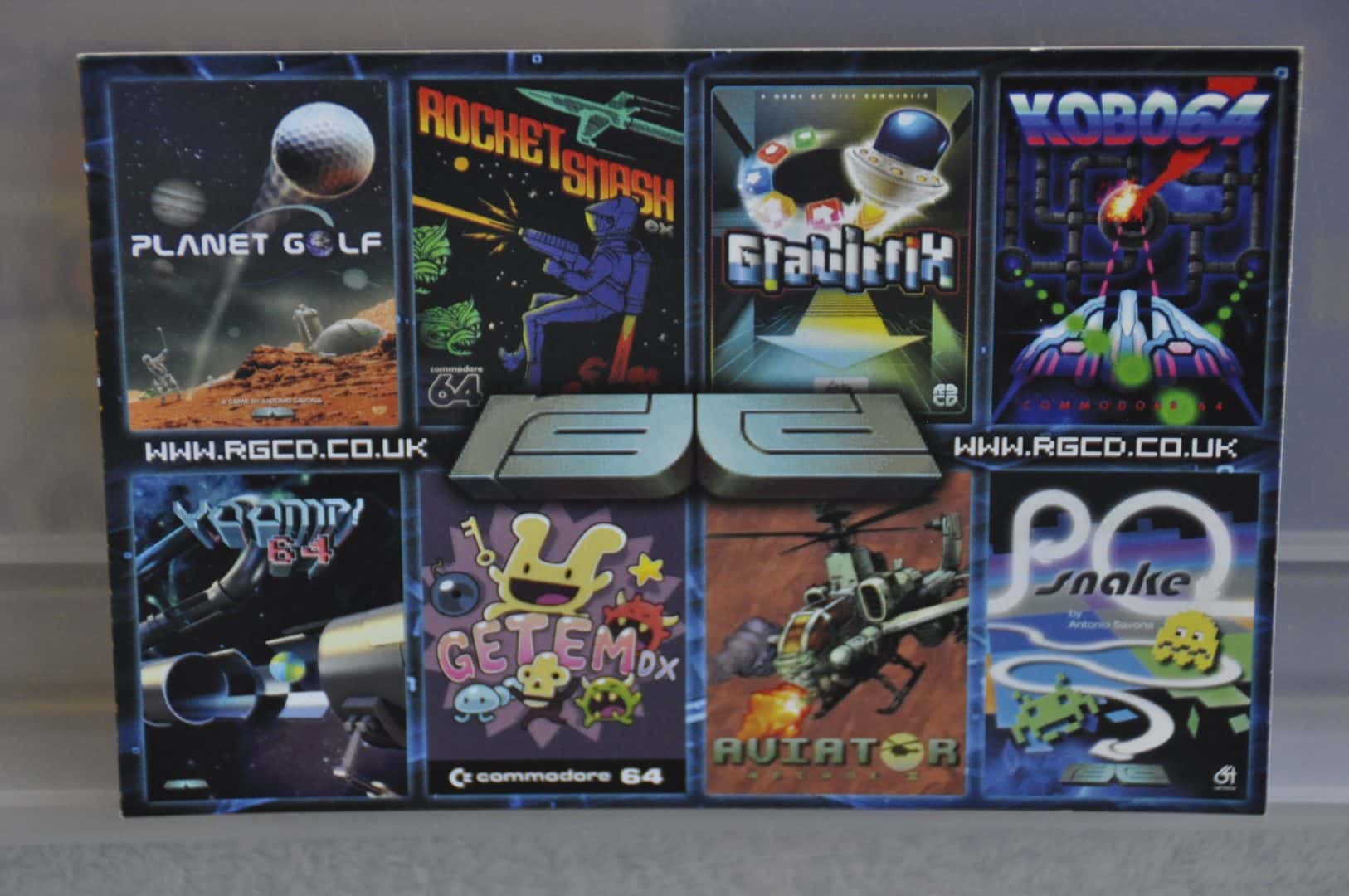 The RGCD postcard reminds me of how brilliant they are as a publisher for the C64, there are so many must have on that card that if you are into retro gaming and got none of them then GO GET THEM RIGHT NOW! 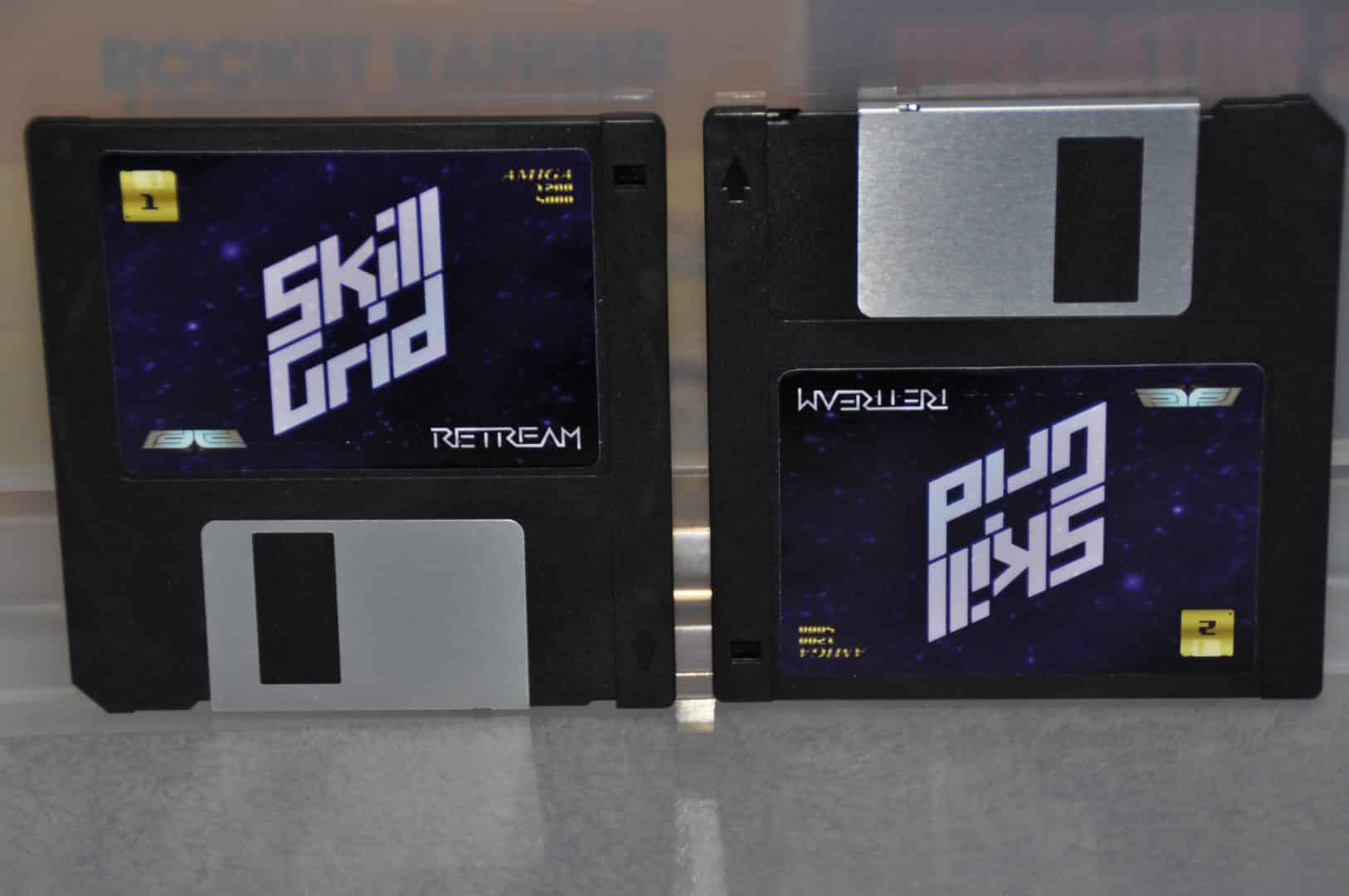 In the Deluxe version, you also get these 2 floppy disks with the game.

If you go for any of the other available versions then you must write the included *.ADF images to your own floppy disks. 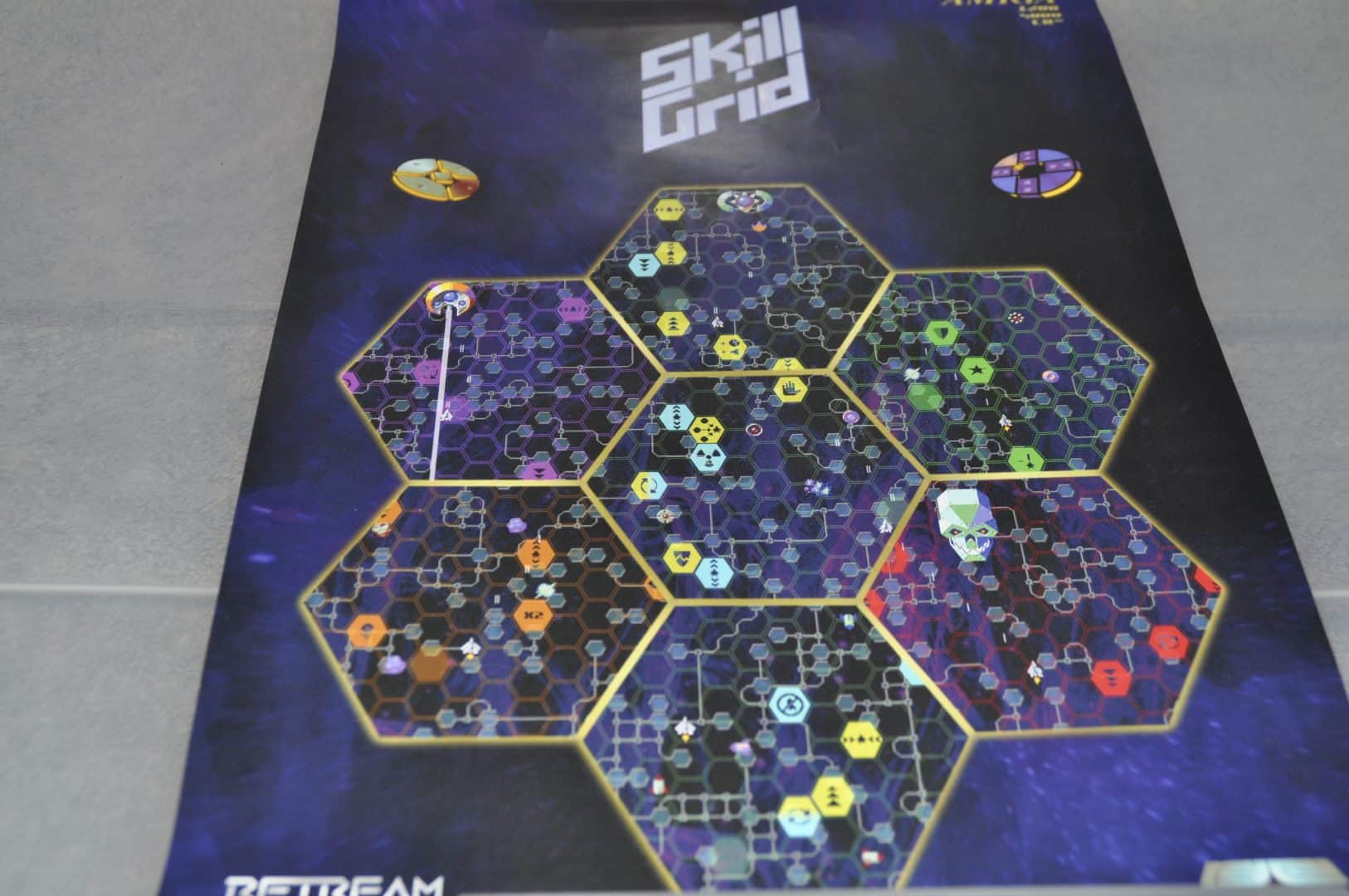 The final bit in this box release is this huge poster, it is one-sided but that just makes it easier for you to put up on the wall right? (both PowerGlove and Tiger Claw came with a double-sided poster).

The quality of the print is awesome and maybe best of all is that it ain’t just an enlarged box shot or something, it is actually a different image to the one used for the box.

Ok, that’s all and now you are probably wondering where to buy this game?

The downloadable version costs $7.99 USD and can be bought from here.

The Clamshell version that I have reviewed in this blog costs £23.00 GBP and can be found here (select Deluxe version on the bottom). 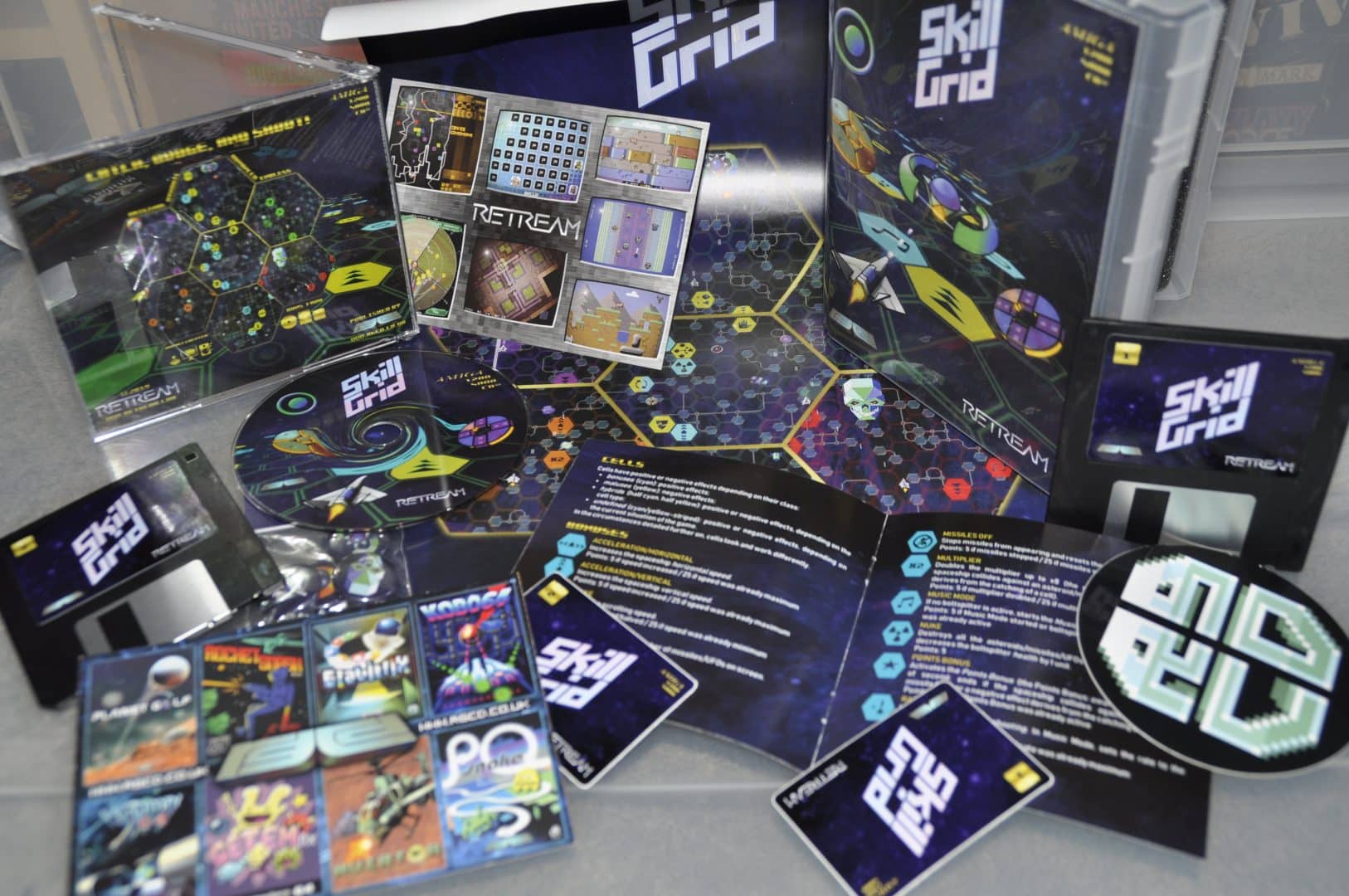 SkillGrid delivers on all its premises, it is as close as you can get to an AAA title on the Amiga, perfectly tuned gameplay mechanics, sweet music and brilliant graphics make this one stand out in the crowd. The only reason it doesn’t score a full 10/10 is simply because of its endless type of gameplay and that this ain’t for everyone. SkillGrid can be really stressful to play and yet very rewarding at the same time but with proper levels and bosses this could have been one of the best games in a long time for our beloved Amiga, but with that said this is definitely one of the MUST HAVE games for for every Amiga nut out there as well as shoot ’em up fans.

Made up your mind yet?

A huge “thanks” goes to RoarTJ yet again for lending me his skills to make yet another classic feature image.

PS: yes, my camera lens is broken and I have to get a new one, sorry for the quality of some of the pictures.

4 thoughts on “A Look At SkillGrid Deluxe Edition”