Trap Runner was one of last year’s must-haves if you are into Amiga games and while the game is actually free as a download title you can support the developer by getting this new retail version.

You can read more about the actual game and where to download it in my earlier write up here. I planned to do a full review of the game alongside this box review but that will have to wait until i cool down a bit. 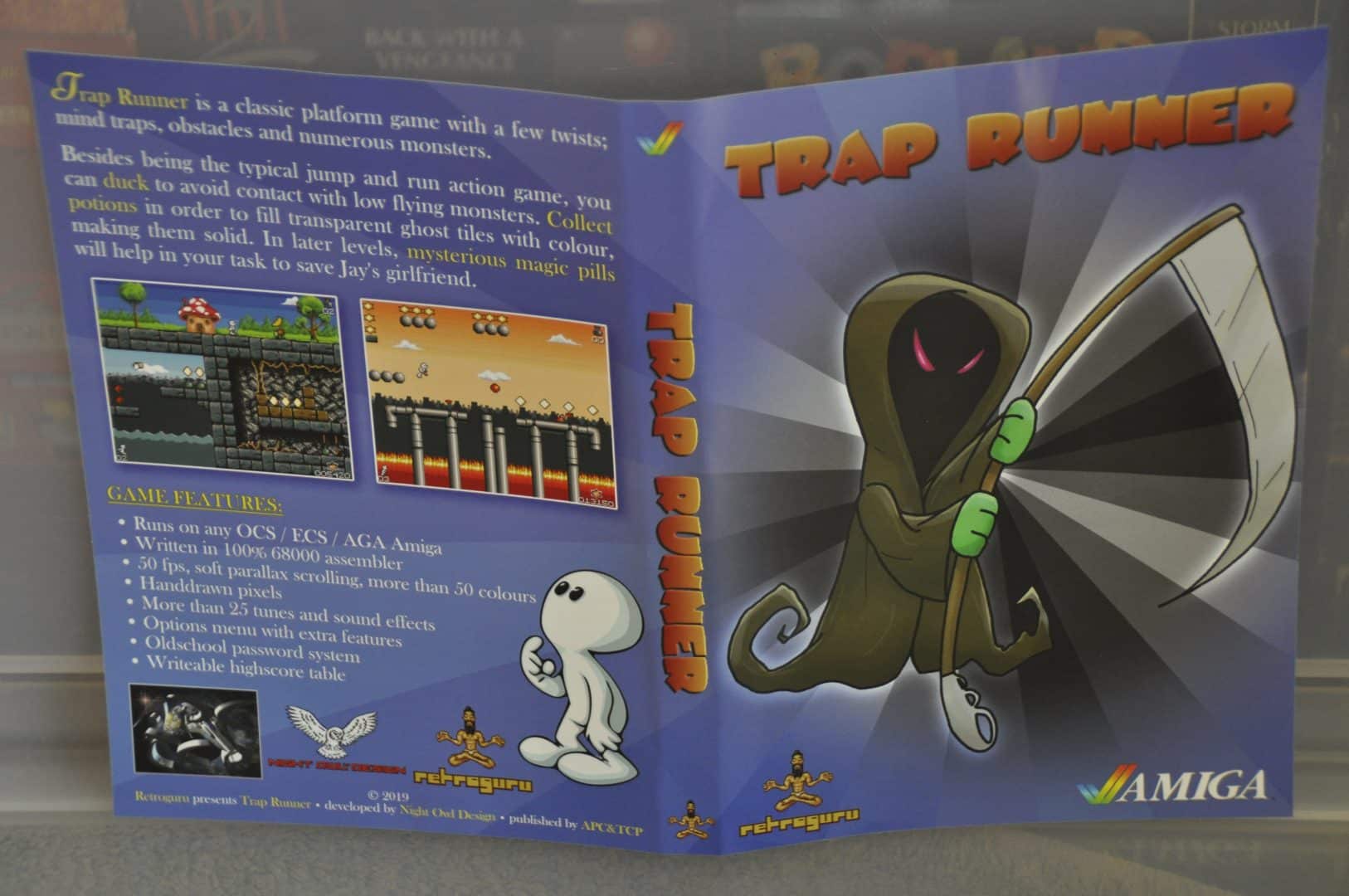 My first reaction to the box was meh! and no this ain’t because it looked bad or anything, I expected it to be in a proper cardboard box and not yet another DVD cover thing.

The colours and design are actually rather cool and yes the print quality is top notch. 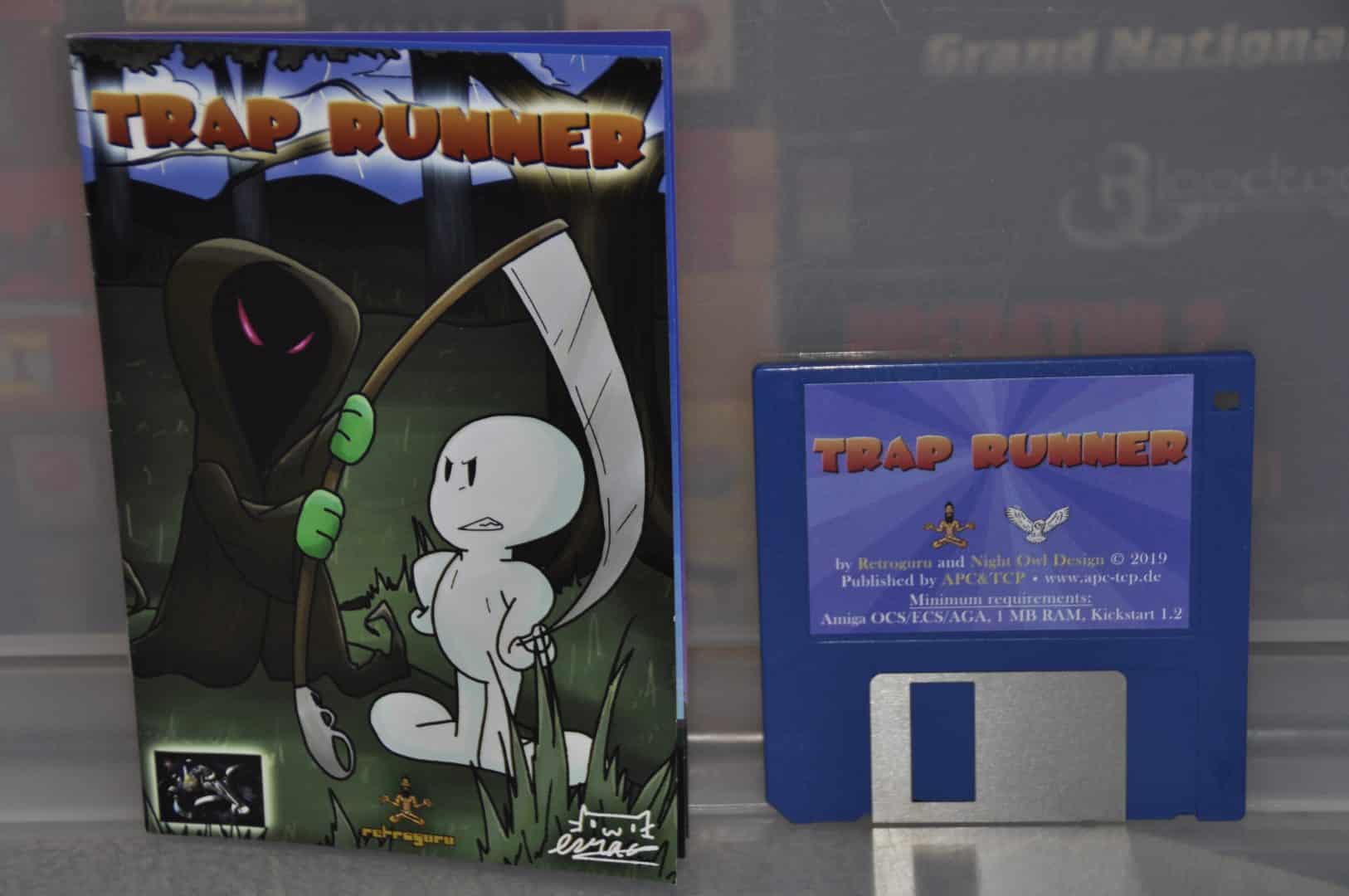 The manual front page looks even better than the box, love it!

The floppy design is simple yet effective, gotta love the colours.

Wait, what? Where is the CD? , I must admit that i expected to see a CD32 disk in this box together with the floppy.

The manual is tiny but its use of colours and images are exceptionally good.

The story from the intro in the game is in the manual and it looks even better on paper than in-game thanks to the print quality. 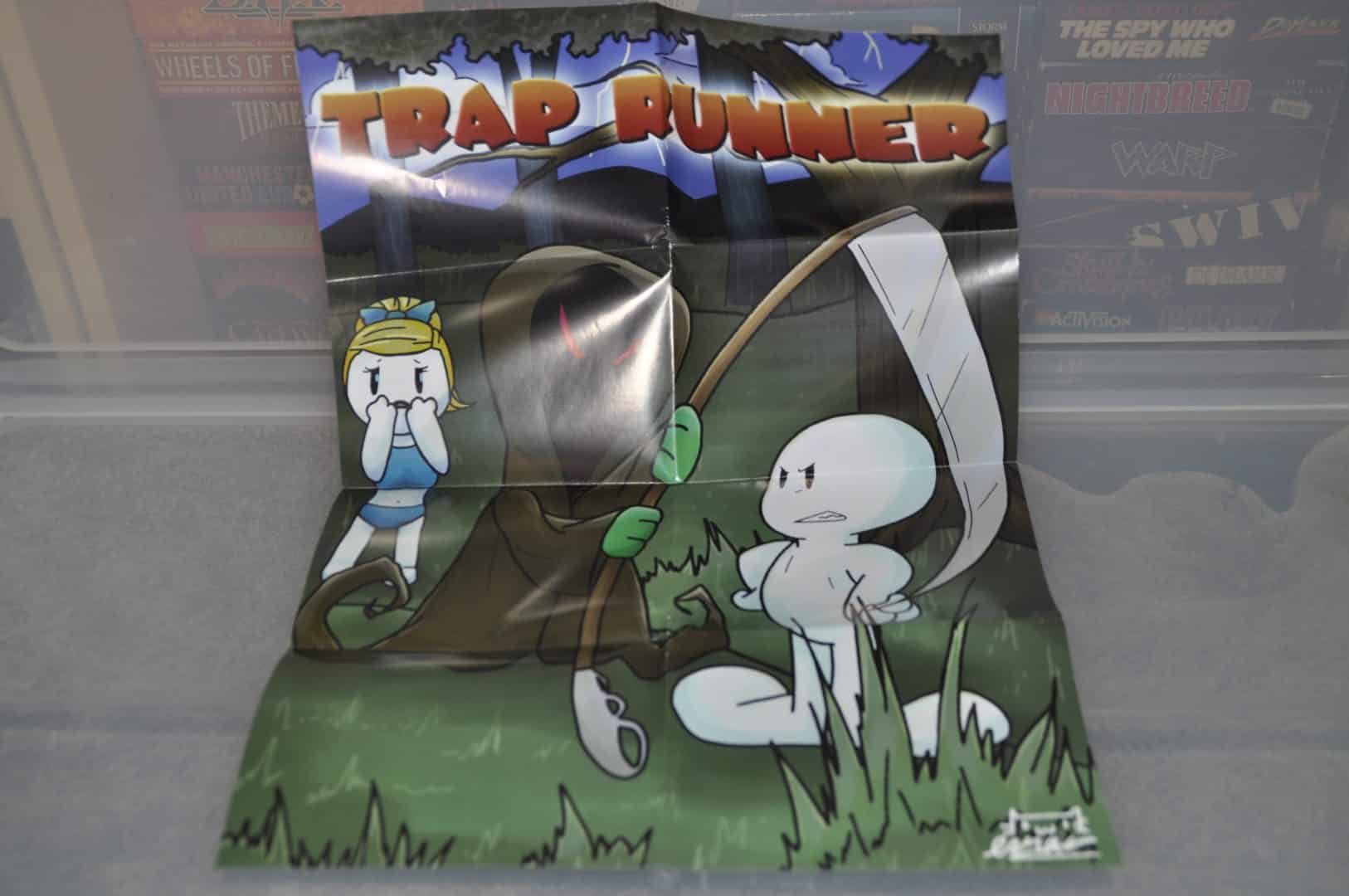 A Trap Runner A3 poster is also included in the box, gotta love the style and whatnot. Sorry for the bad picture but I hate folding them posters all out as it wears them down. 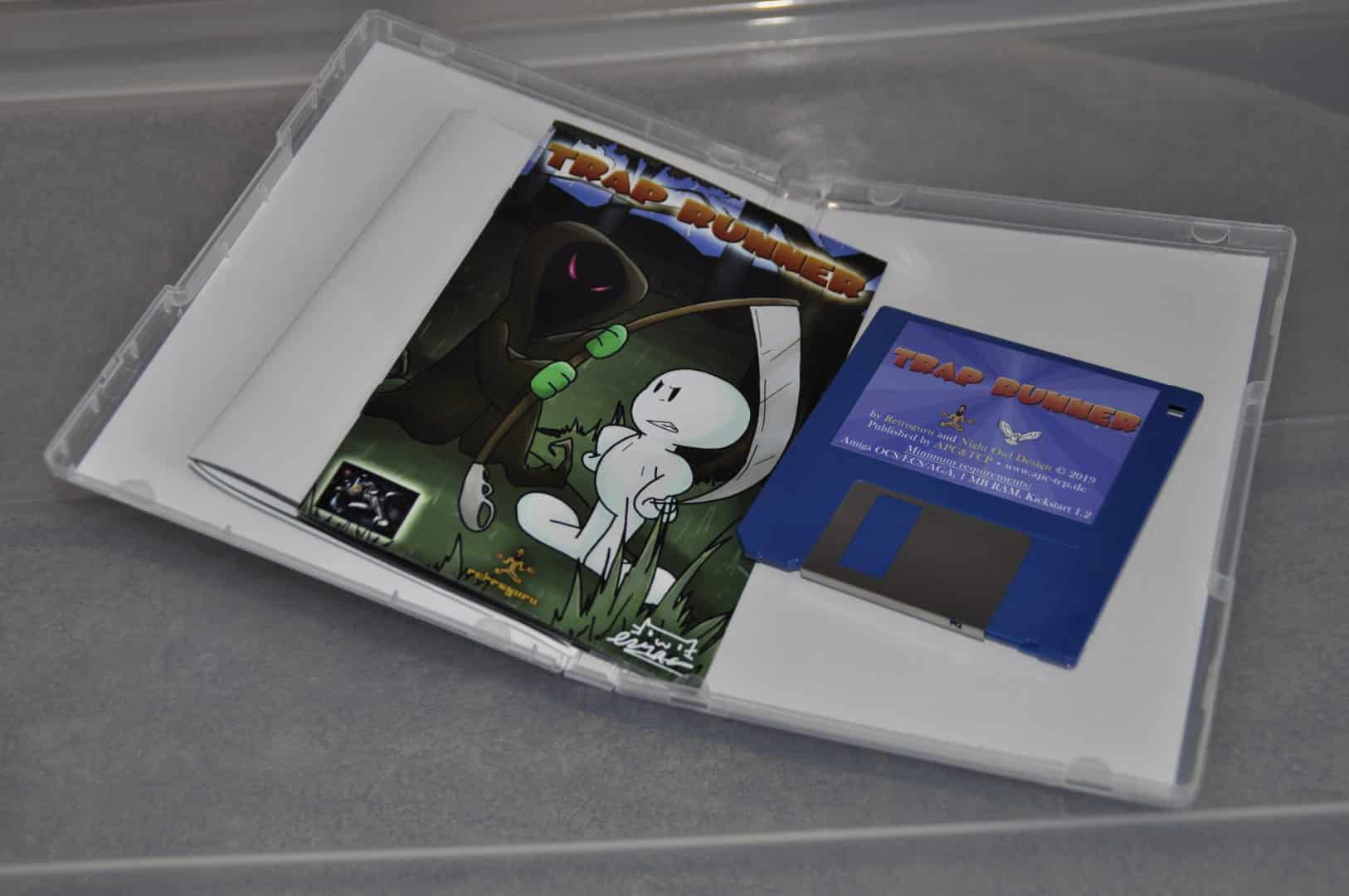 Here is another bad thing about the box, APC-TCP used to do good floppy boxes but this was a major letdown, there is no way to attach the floppy disk inside the case and the same goes for the manual and poster too, everything is just loose inside.

With the rise of CD32 titles lately one would have thought that there would have been a CD inside this box too, it would mean more sales for the same cost really when all the box work is done anyway so this was quite a bit of a let down, with that said the game works fine on the CD32 if you got a floppy drive attached (via an expansion like the SX-1 etc).

I know that this is produced in low numbers and that they don’t want to price the item too high and therefore cut costs on production… but like this? – Come on! 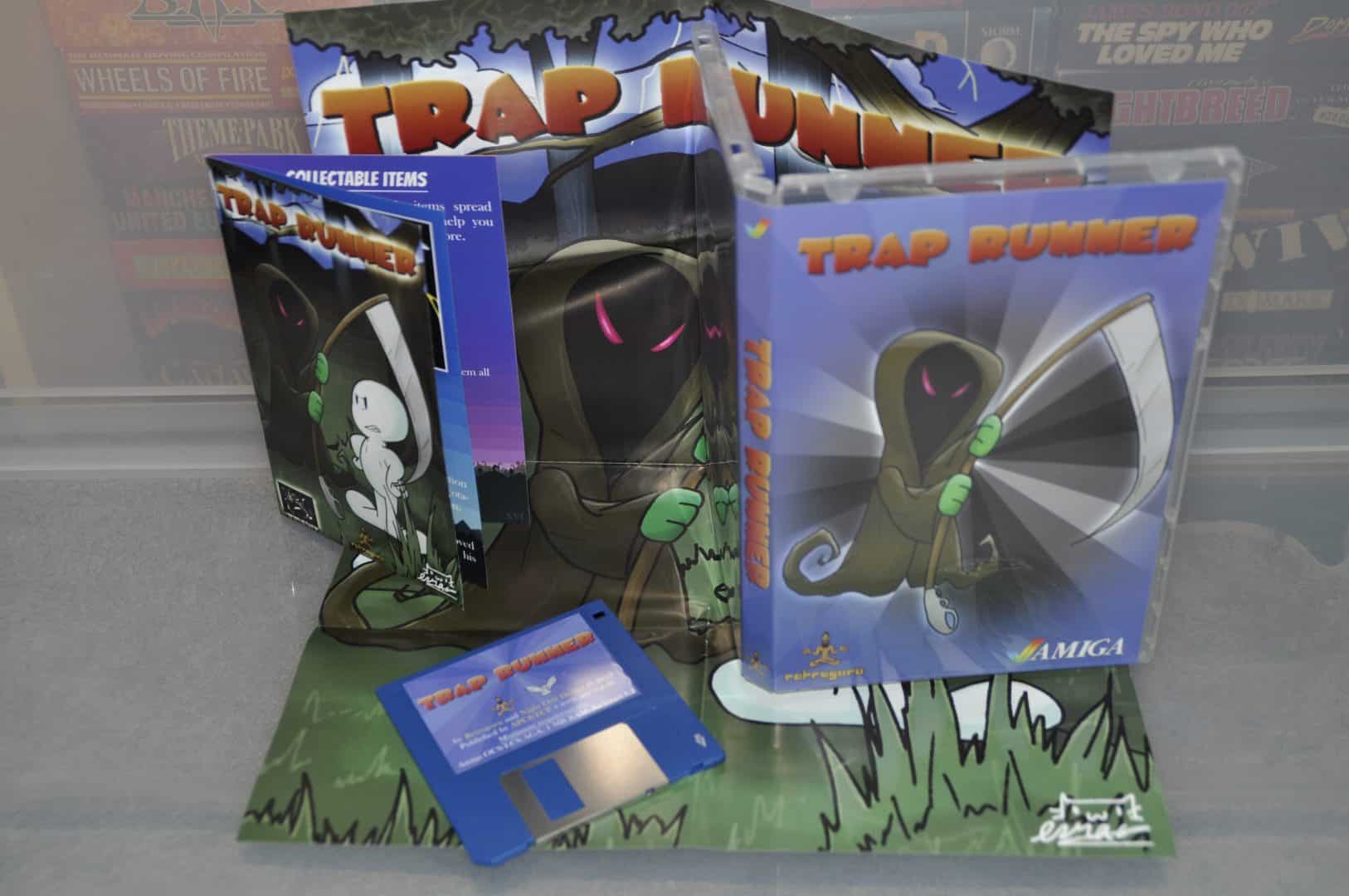 Trap Runner deserves a much better box than the one APC-TCP have delivered here, I expected way too much I guess, but right now I am really questioning if I should have just donated money directly to Night Owl Design & Retroguru and it would have been more worthwhile. The best thing with this release is that it happened and that we got one more release to be proud of in the collection.  This box would have been ok for most games I guess, but this is Trap Runner for god sake!

I have attached the previous article below, enjoy.